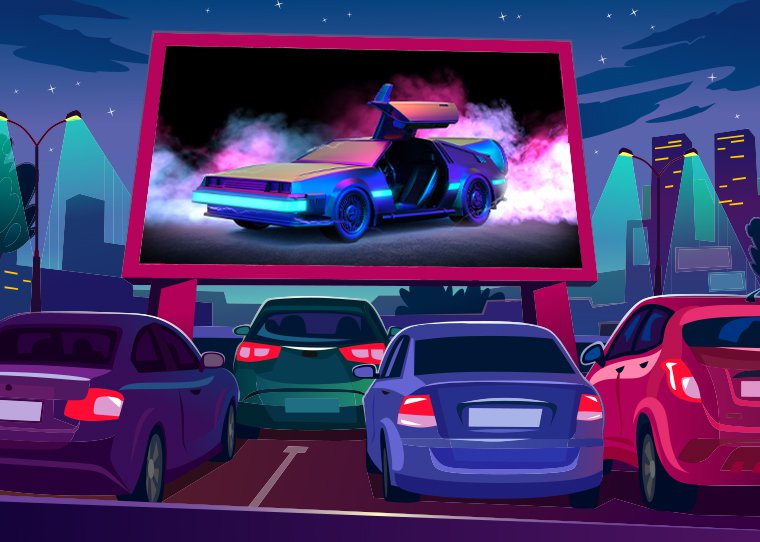 From the cartoonish time travelling DeLorean in Back to The Future, to the sophisticated Aston Martin DB5 — James Bond’s first on-screen whip — movies and cars have long had a close relationship. Chase sequences, death-defying stunts, family road trips, pro-racing action, automobiles have played central roles in so many films making any list of the best is no mean feat.

Unperturbed by the challenge, to celebrate the 30th anniversary of Leasing Options we’ve taken the breaks off, and piled into the following iconic rides from the last 30 years of film, from the ridiculously over the top to reasonably priced repair jobs.

Runaway wife and girlfriend team Susan Sarandon and Geena Davis leave oppressive and neglectful other halves behind to head out on one hell of a road trip, and the police are soon tracking them for murder charges. Their hair-raising and fateful journey is the backdrop for an increasingly honest, supportive and understanding friendship between the women as they make for the desert in an old 1966 Ford Thunderbird.

While the 2003 version has nothing on Michael Caine doing his thing in 1969, we’re thankful for small blessings — without this remake we couldn’t have included this car. Digressions aside, you know the deal; London ne’er-do-wells hit Italy for a daring heist, where the real star of the show is the Mini Cooper, one of Britain’s most iconic vehicles of all time.

Clint Eastwood directs and stars in this poetic motoring movie. His character, a Korean War veteran, is knocking on and wants the quiet life. Teenage neighbour, Thao Lor, has other ideas and tries to steal his beautiful 1972 Gran Torino, one of Ford’s finest classics. What follows is a story of mutual disrespect, learning, ageism, bigotry, and a shared passion for muscle cars.

Keanu Reeves is more than a little upset when his car is nicked and dog killed by ruthless members of a vast criminal network that controls the city. Understandably so, all this happens just after the love of his life dies. Hell bent on revenge and the need to at least get his Ford Mustang Boss 429 back, a 1969 muscle icon and the only remaining piece of life as he once knew it, the body count soon starts to pile up.

Tom Cruise might as well say “I’m a professional race car driver” in every scene here as he smarms his way through the story of Colt Trickle, a NASCAR pro with an ego. Nicole Kidman, who he would marry later that year, also stars, and Jerry Bruckheimer directs with the subtlety of a Range Rover. Still, what it lacks in high-brow movie creds is more than made up for by high octane scenes of a Chevrolet Lumina stock car.

Ignore the 1998 blunder, this is the real return of everyone’s favourite racing kit VW Beetle. The little Volkswagen has a mind of its own, which makes it all the more upsetting when it gets sent to the junkyard after a series of poor track performances. Turns out all a car needs is the love of an enthusiastic wannabee racing driver, so when she turns up the pair hit if off immediately and Herbie is soon back on top form.

We couldn’t include Days of Thunder without this not-so-subtle spoof. Here we follow NASCAR driver Ricky Bobby and his teammate Cal Naughton, Jr. as they dominate the tracks, rake in millions through sponsorship and spawn some particularly horrendous kids. Then it all comes unstuck, in and out of the driving seat, leaving the once-top dog to claw his way back to pole position in his custom Ford Taurus.

If wheels and movies go together like movies and wheels, Steve McQueen was the welding between the two for many years. He escaped the Nazis on a Triumph motorcycle, made the Ford Mustang GT390 a global superstar, and appeared in the classic petrolhead film Le Mans, based on the world’s greatest race. This documentary looks at how that movie was made, and McQueen’s love for the Porsche 911S and 908 Spyder.

The street cars we desire

Marseille is one of the coolest cities in Europe. Everyone should go. Combine its dramatic hillside streets with a modified, nitrous-packed Peugeot 406 taxi and white knuckle chases ensue. Our driver, Daniel, is caught speeding, and must help a police inspector who doesn’t have a license pursue a gang of German bank robbers in order to make amends and avoid a serious penalty.

Probably one of the coolest films of the century so far has it all — razor sharp electro soundtrack, Ryan Gosling looking mysterious, and a 1973 Chevrolet Chevelle, the ride of choice for the main character, a Hollywood stuntman who makes a sideline in getaway jobs. Interestingly, apparently Gosling would take the car apart and put it back together again during filming to fully get into his role.

Max’s customised Interceptor is an expensive bit of kit — a real monstrous hybrid of muscle car and off-roader. The ideal hulk of horsepower to survive post-apocalyptic Australia, where life is cheap and vehicles are cut together from whatever remnants of civilisation are left, there are few places his ride won’t go. Which is a good thing, given all the crazed maniacs he must escape from.

You have to feel sorry for Sergeant Roger Murtaugh, whose partner Martin Riggs has ensured every car he’s had, and half the station wagons his wife has ever bought, have wound up scrap metal due to reckless and destructive police chases. In the third movie he’s down to this 1987 Chevrolet Caprice 9C1, which will be familiar to fans of the film and also appeared in countless other cop flicks from this era.

Charting the highs, lows, trials and tribulations of two best bud rockers and the TV show they co-host, one of the most iconic members of the supporting cast is this 1976 AMC Pacer, complete with custom sky blue and flame paint job. Affectionately known as The Mirthmobile, it features in some of the most memorable scenes in the films, including the famous Bohemian Rhapsody sing-along sequence.

Is it cheating to include the Ford Gran Torino twice? Whatever you think, we couldn’t forget this rundown runaround driven by The Dude, a pot smoking, white Russian-drinking, bowling-loving work shy hippy who becomes embroiled in the plot to kidnap an ageing millionaire’s young trophy wife. The car becomes increasingly banged up as the plot thickens, making for visual comedy gold.

The Volkswagen bus T2 had appeared on screen plenty of times before this sweet and hilarious indie flick stole the hearts of cinemagoers across the world, but this is perhaps its finest role. A slightly dysfunctional intergenerational family hit the road so the youngest daughter can compete in a beauty pageant, piling into their bright yellow minivan for the journey. A special nod to grandpa, Alan Arkin, and his worldly advice.

The cars of tomorrow we need today

When Christian Bale became Batman the most recent Batmobile incarnation was born. It looks like a tank, moves like a jet and can drive up walls and on ceilings. Easily the most menacing and militaristic we have ever had from the many versions of this iconic comic book car, when it first appeared in Batman Begins it helped overhaul an entire franchise after some decidedly weak 1990s movies.

Based on a short story by legendary science fiction writer Philip K. Dick, we find ourselves in a future where crime has been eliminated because the police can predict murders before they happen, and make an arrest. It’s a poignant look at authority and corruption, but the cars are equally memorable — so fast, so smooth, so automated, they are fixed to roads designed with loops, hairpins and rollercoaster drops.

Rebooting the classic 1980s cartoon series, Transformers spins a slightly unbelievable yarn about an ancient battle between two robot species, the heroic Autobots, and the devilish Decepticons. In truth, both are deceitful, taking on the form of high-end performance cars so they can blend in on Earth and fight each other for control of the universe. Bumblebee, a Chevrolet Camaro, is particularly impressive.

Another sci-fi big gun based on Philip K. Dick’s work, this one’s all about replicants — cyborgs that look, talk and feel like people. Everyone freaked out because they became too realistic, so the machines went into hiding and it’s up to people like K, a Blade Runner, to track and terminate them. He also gets to cruise around in a sweet-looking spinner, his flying car that owes plenty to the Laborghini Aventador.