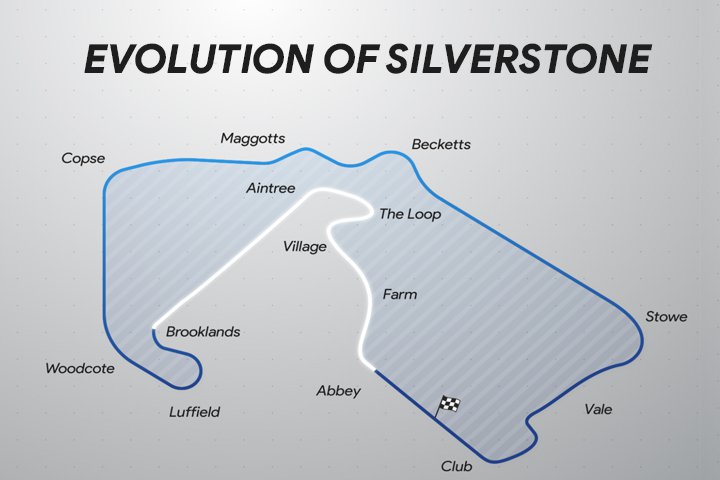 Now that the future of Silverstone has been secured for the next five years, we thought we’d take this opportunity to look back at how the track has changed since 1948.

To do that, we’ve created an animation to show all of the many changes that Silverstone has undergone since racing began on the venue, explained what the key changes were and listed our top five Silverstone Formula One moments.

The Evolution of Silverstone Track

The first Grand Prix at Silverstone took place in 1948, but the course was somewhat different and more terrifying than it is today.

The course used both of the runways left over from Silverstone’s days as an airbase. The course itself was marked out with oil barrels and straw bales, and the only thing protecting spectators was a rope.

The circuit was altered to use the airport’s perimeter roads as it was a much safer option.

Silverstone also hosted the first F1 World Championship in 1950. The victor was Dr Giuseppe Farina for Alfa Romeo, a win witnessed by the Queen. This was the only time a reigning monarch has attended a British motor event.

The pits were then relocated in 1952. This configuration was used by Grand Prix motorcycle racing through to 1986.

1975-1986: New Chicane Added
A new chicane was added to the track in time for the 1975 Grand Prix in order to slow cars through Woodcote corner.

In 87 the Bridge chicane was introduced to further reduce speeds into Woodcote and therefore the original layout of Woodcote returned.

Silverstone saw some significant changes between 91-93. Copse radius was increased; Maggots and Becketts were given esses; Vale was introduced in between Stowe and Club; there was an elevation adjustment beyond Abbey and finally a big change to the final sector, which saw a right turn at Bridge and the introduction of Priory, Brooklands and Luffield corners.

Following the deaths of Roland Ratzenberger and Ayrton Senna, the world of motor racing was increasingly concerned with safety. This led to an increased run-off at Copse as well as it and Stowe becoming tighter.

To further improve the safety of the track, a chicane was added to Abbey, Vale was straightened into a tighter Club left apex, Priory was moved closer to Bridge and the Pit Lane was also rerouted behind a wall.

In 96 Stowe was re-profiled to today’s configuration, giving the corner a fast sweep.

Over the next few years, Copse, Priory, Brooklands and Luffield were redesigned, resulting in a faster track.

The pit lane entry was straightened during this period to minimize the time it took for drivers to get from the circuit to the pits.

Once the entry to the pits had been altered, the track’s Pit exit was reduced, again to allow drivers to re-join the race quicker.

The new course was completed, to be unveiled in time for the 2011 Grand Prix. The Circuit introduced new corners after Abbey, Farm, Village, The Loop and Aintree would all need to be taken before arriving back at Brooklands.

In 2011, the start/finish straight was moved from between Woodcote and Copse to between Club and Abbey.

Racing icon James Hunt only won one grand prix at Silverstone, and this was it. Hunt was already a fan favourite and this year the fans got what they came to see. Hunt finished ahead of his long time rival, Niki Lauda, by 18 seconds.

After being forced to pit on the 35th Lap of the 1987 Silverstone Grand Prix, Mansell found himself 28 seconds behind his teammate Piquet.
Mansell then produced one of the great charges through the field, moving past backmarkers and beating the lap record multiple times in the process. This came to a head on the penultimate lap, when Mansell made his move to overtake Piquet. He fainted to the left then, when Piquet adjusted, cut inside. This meant being dangerously late on the brakes and could have led to trouble when Piquet cut back across. But, the move worked and Mansell went on to win the race.

Sometimes you can win by acting to the letter of the law, if not the spirit. In 1998 Schumacher looked in position to carry the day until, with three laps to go, he was hit with a 10-second stop-go penalty. This left him with, everyone thought, too little time to take a penalty and then regain the lead. So, on the last lap, Schumacher went into the pits and served his penalty there. Therefore, he won the race in the pit lane as the finish line was before the Ferrari pit box. This led to a lot of confusion over what was the correct application of the penalty. The stewards ultimately decided that no accurate penalty could be applied. So, Ferrari won, when they possibly shouldn’t.

Okay, so he didn’t end up winning the race but this was still a very impressive performance.  Hamilton was overtaken twice, by Vettel and then Bottas, at the first corner. Then he ended up spinning off the track and facing the wrong direction after getting knocked by Kimi Raikkonen, meaning he was in last place.  What followed was extraordinary. Hamilton raced his way back through the pack in thrilling style to finish second.

Sometimes you need a friend to get you where you need to be. Senna was dominating the 1991 Grand Prix until the final lap, when his car unexpectedly ran out of fuel. He was still waiting by his McLaren when race winner Mansell stopped to give him a lift back to the pits. It was a move that probably broke every health and safety rule there is, but has become one of the most iconic and endearing images in the sport’s history

What's in a name?

Most of the features of the Silverstone track have their own names. If you’ve ever wondered what they are and what they mean, you can find out now.