It’s hard to believe the ‘new’ Volvo XC90 was introduced almost four years ago. For its 2019 model year, the XC90 was given a mid-life refresh with a few exterior style tweaks and very little change inside.

The more significant updates are under the bonnet, but more on that later. Volvo has been cleverly overseen by Chinese parent company Geely, since they invested in the Swedish carmaker nearly a decade ago. After chucking barrow loads of money in the Swede’s direction, they wisely let Volvo chart its own future success. They rest, as they say, has been a remarkable short-term history as across the entire product line-up, sales have consistently risen over the intervening years.

The XC90 is still built at the Gothenburg plant in Sweden and goes head to head with other large SUVs such as the Audi Q7, Land Rover Discovery and BMW X5. All versions of Volvo’s flagship SUV are 4WD, have eight-speed Aisin-sourced automatic gearboxes and, of course, seven seats spread across three rows.

We recently spent a week with the top of the range XC90 T8 ‘Twin Engine’ hybrid, presented in R-Design trim… 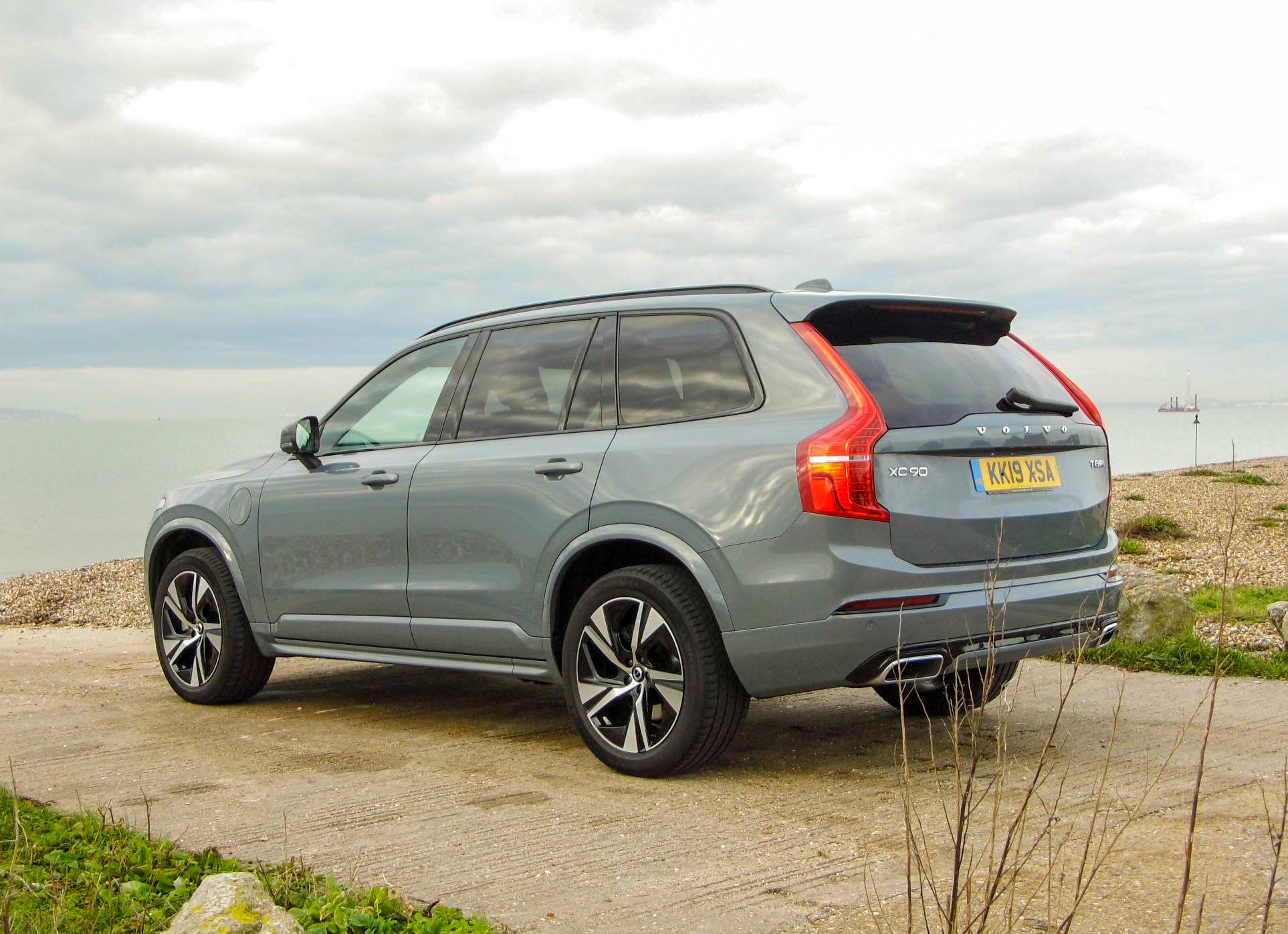 Outside and in, it is Scandinavian design writ large…modern yet devoid of gimmickry and luxurious in its simplicity. Clean lines and uncluttered panels give way to ‘Thor’s Hammer’ LED headlights at the front and the tall, scythe-like rear light clusters reach up to the roofline. Dual chrome exhausts afford the rear a hint of sportiness and I particularly like the way the wing mirrors are set quite far back on the doors to give better forward vision.

R-Design variants (as tested) have been given an even more purposeful look with a new black high-gloss finish for the exterior trim, including the door mirror casings, window frames and roof rails. With its Spartan design aesthetic and high-quality materials, the Volvo XC90’s cabin is undeniably handsome and is the car’s USP. Its genuine metal accents are pleasing to both the eye and the touch and its controls are generally laid out in a logical and uncluttered manner. The nine-inch central touchscreen is set vertically rather than horizontally, which Volvo says allows for superior map viewing and menu structures. All XC90 models are swathed in leather throughout. Both front seats are comfortable and spacious and provide exceptional long-haul comfort. Second-row passengers are treated comparatively well and enjoy a good amount of legroom. As with most large seven-seat SUVs, the third-row furniture is best left to teens and children, most of whom will have their eyes down to their phones anyway so won’t know any better.

The XC90’s cargo capacity is generous. With all the seats up, there's still a hatch-bashing 450 litres of space available behind the third row. For everyday use with the third row folded, boot space increases to 1,102 litres. For those more copious skip-run clear-outs, flattening the second and third row reveals a cavernous 1,902 litres. Don’t be taken in by the T8’s 'Twin Engine’ tag – this XC90 is still powered by the supercharged AND turbocharged 320hp/400Nm 2.0-litre petrol engine from the T6 version tested earlier this month, but is boosted by an 87hp/240Nm electric motor which drives the rear wheels. That’s where the hybrid bit comes in. The total system output is 420hp, with 640Nm of torque driving two – front or rear – or all-four wheels.

The combination of the engine and electric motor produce an official CO2 emissions figure of 49g/km, whilst being able to cover 27 miles in electric only mode. The electric range is less than its cheaper rivals of the Mitsubishi Outlander PHEV and 2020 Toyota RAV4 Prime PHEV, coming in to our shores soon, but it is however more than the BMW X5 xDrive440e, a vehicle of similar dimensions to the XC90. The XC90 T8’s 16-cell, 400V lithium-ion hybrid system battery is mounted in the centre of the car, where the transmission is situated in its petrol-only-powered stablemates, while a 12V battery for the petrol engine can be found in the cargo area. The ‘Electrical Rear Axle Drive’ powers the car when in all-electric mode and supplements the petrol engine when larger power outputs are needed or when all-wheel drive is required.

The hybrid system tops up and recharges the battery via regenerative braking.

Compared to the non-hybrid versions of the XC90 the hybrid only loses 52 litres of boot space capacity, to house the hybrid drivetrain.

Power is delivered with a brief pause as you push your foot down before the XC90 T8 Twin Engine aligns all the systems and you quickly find yourself going faster than you ought to.

The T8 Twin Engine version of the XC90 is set up in the same way as the rest of the range – with emphasis on comfort and becalmed progress. Suffice to say that if you’re seeking a sporty SUV that attempts hot-hatch levels of handling and ability, you’d best opt for one of the BMW or Porsche PHEVs available.

The Volvo is an exceptionally comfortable and cosseting machine which makes light work of long journeys. However, with a more supple suspension set-up, there are greater levels of body roll than the aforementioned German rivals – a compromised many are more than willing to accept. Rest assured, though, the XC90 is no floaty barge.

What you get is a refined ride with excellent levels of grip, even when pushing on through B-road twisties or on less grippy roads. Unlike many of its seven-seat rivals, the XC90 has window airbags that protect those in all three rows of seats, not just the first two. Plus, it comes with the latest version of ProPilot safety system, which can automatically apply the brakes if the car in front comes to a sudden stop, or if a pedestrian steps out in front of the car.

The regular XC90 is extremely impressive and the addition of the T8 Twin Engine PHEV complements the range perfectly. To make the T8 Twin Engine work well, you need to play to car’s strengths and make regular charging top-ups, otherwise – like all PHEVs – the fuel economy drops to somewhere in between that of the diesel and petrol models and in many cases, lower.

Sure, it’s pricey but is still good value considering the large equipment list that comes with the R-Design trim level.

Overall, the lack of compromise on interior space, the raft of safety features befitting a high-end Volvo, the excellent grip over all terrains, plus the added practicality of the extra row of seats plus potential for extremely low running costs make the XC90 T8 Twin Engine an excellent all-rounder.