We present a selection of bite-sized automotive news from the past seven days. In this week’s issue, we feature news from BMW, Skoda, Vauxhall, Land Rover, Subaru and Audi. BMW has revealed its all-new 1 Series hatchback ahead of its arrival in showrooms in September. The big-selling model rides on BMW’s new FAAR platform and is front-wheel-drive for the first time, which increases interior space and reduces the car’s overall weight.

BMW’s FAAR architecture is a next-generation development of the existing UKL platform that underpins the first wave of front-wheel drive BMWs and the current MINI range.

The introduction of front-wheel drive is the most significant change in the 1 Series’ history. While enthusiasts argue that it robs the individuality and unique driving characteristics, BMW is keen to point out the benefits of sending the power to the front wheels. It also brings it closer to its rivals, which include the Mercedes A-Class, Volkswagen Golf and Audi A3.

The latest model is all-new, and that starts with the styling. It’s markedly different to the outgoing BMW 1 Series with more aggressive detailing that brings it closer to the BMW X2 SUV. The low, sloping front end features much larger ‘kidney’ grilles, steeply angled headlights and a wide lower air intake. The range-topping M135i performance model adds a sportier bumper, silver mirror caps and bi-colour 19-inch alloy wheels - the largest size ever for BMW’s smallest car.

The window line rises over the rear wheels and joins the top of the windows with a so-called ‘Hofmeister kink’ – a defining BMW styling characteristic. At the back of the car, every part has been redesigned, including the optional LED tail-lights, rear bumper and spoiler. On the whole, the car looks much less subtle than the outgoing model.

Although the move from rear- to front-wheel drive will upset purists, BMW suggests that 85 per cent of customers won’t be able to tell the difference. It also opens up the probability of a 1 Series plug-in hybrid follow soon after, which will likely deploy the combination of 1.5-litre petrol engine and electric motor found in the MINI Countryman PHEV.

BMW claims the new FAAR platform gives the new 1 Series improved handling and ride quality. The car has a wider track, increased rigidity, a revised steering setup, new rear suspension and a reworked stability control system. Options for the 1 Series will include sports suspension, with the M135i getting a torque-vectoring limited slip differential as standard to improve grip in corners.

To register your interest in leasing the all-new BMW 1 Series, please call our friendly and helpful sales team on 01618 269716. 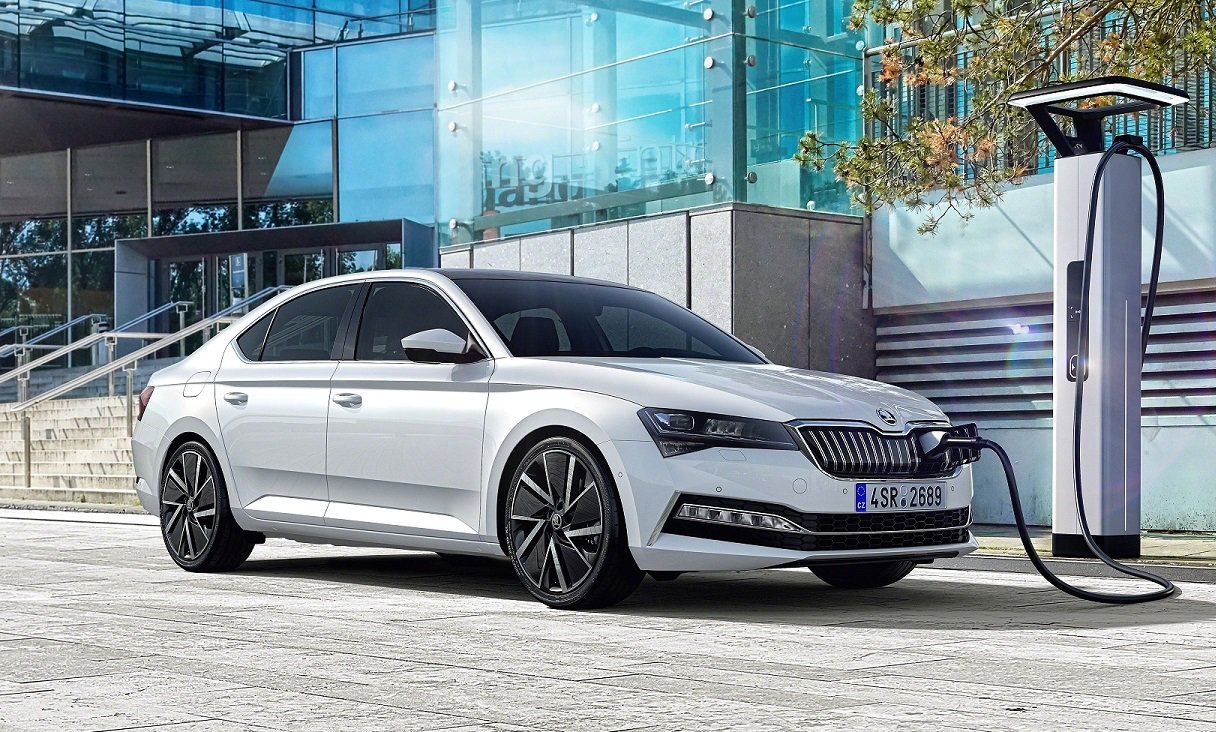 The Skoda Superb iV plug-in hybrid has been revealed as part of a mid-life model facelift and is the first time the large Czech saloon has been offered with an electrified powertrain.

The Superb iV will use the same powertrain setup as the latest Volkswagen Passat: a 1.4-litre turbocharged petrol engine plus an 85kW gearbox-mounted electric motor. Together, they generate 215hp with power for the motor coming from a 13kWh battery.

An electric range of 35 miles is assured as well as official CO2 emissions of less than 40g/km. This should deliver rock-bottom company-car costs and free access to the London Congestion Charge zone – at least until October 2021 when the goalposts are expected to move yet again.

An official fuel-economy figure hasn't been announced yet, but Skoda says the Superb iV will be able to travel nearly 530 miles on a tank of fuel.

Elsewhere, the regular Superb is blessed with a series of aesthetic updates including new LED matrix headlights, a refreshed front grille, a new front bumper design, revised rear lights and strip of chrome trim along the boot lid. Inside, modern digital gauges and infotainment screens abound.

The iV plug-in hybrid powertrain will not form a standalone variant of the Superb, but instead be offered as an engine option alongside the regular petrol and diesel in various trim levels.

Alongside the PHEV setup, the line-up will encompass three petrol and three diesel engines, with the former offering outputs between 148hp and 268hp and the latter between 118hp and 188hp. Both six-speed manual and seven-speed DSG automatic gearboxes will be offered across the 2019 Superb model range.

To register your interest in leasing the all-new Skoda Superb, please call our friendly and helpful sales team on 01618 269716. 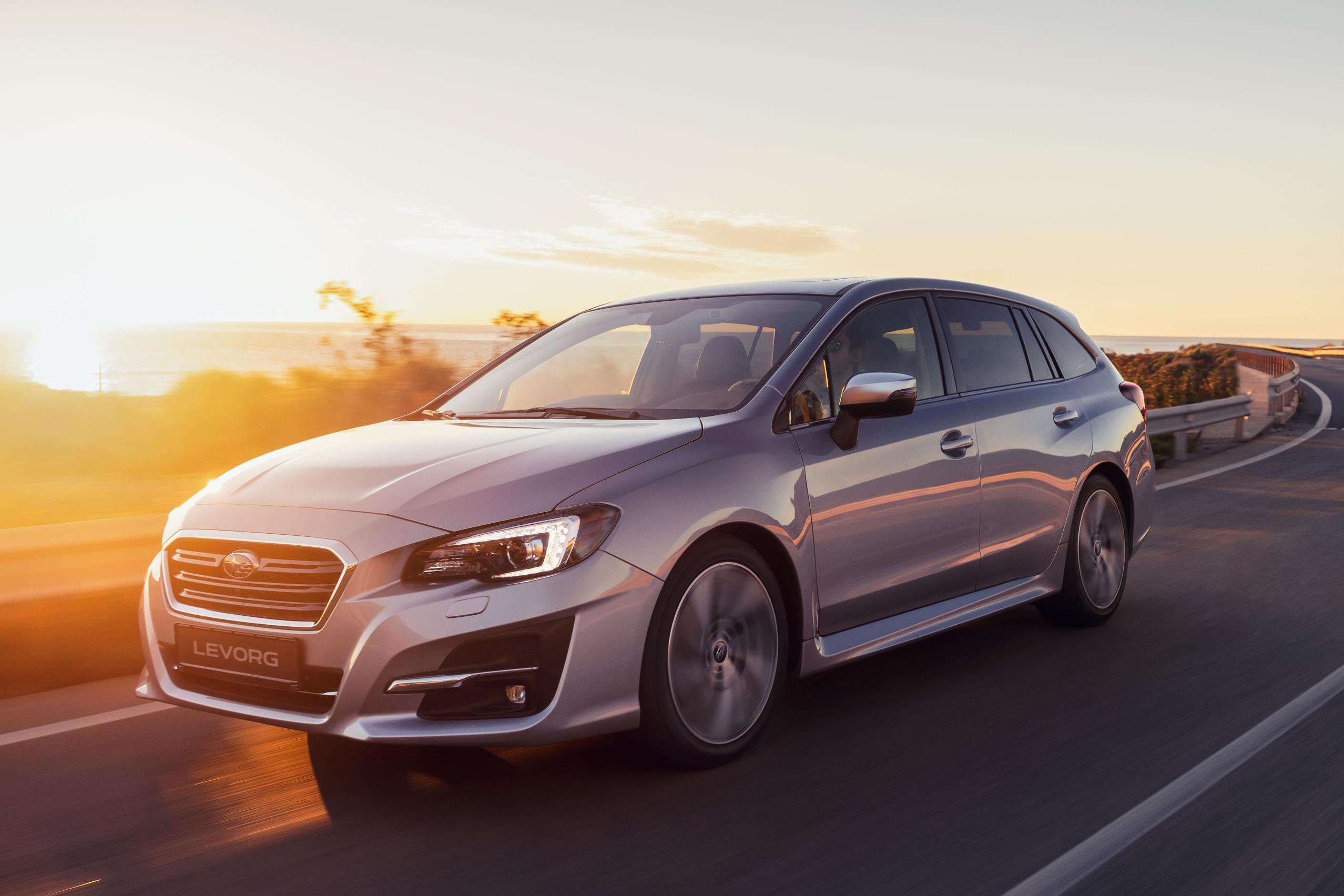 Comfortable, capable and effortless in any environment, the Levorg’s new petrol engine is combined with Subaru’s proven Lineartronic CVT transmission (one of the best CVT’s in the business, if truth be told) and symmetrical all-wheel drive as standard. The family-oriented estate also benefits from re-engineered suspension and steering gear to deliver improved ride comfort and driver engagement.

The front face has been revamped with a more refined front bumper, a sharper front grille and refreshed headlight and fog light designs. New 18-inch alloy wheels complete the exterior look, along with LED steering-responsive headlights and LED fog lights.

Inside, there has been discreet style upgrades to the instrument panel, door trim and switches. Plus, there have been improvements to comfort with power adjustable lumbar support introduced on the driver’s seat. Rear seat and boot space has been enhanced with a new 40:20:40 split folding rear seat configuration that improves practicality.

The Japanese manufacturer’s stoic attention to safety continues with the inclusion of Subaru’s own EyeSight driver assistance technology which includes adaptive cruise control, pre-collision braking and lane departure warning. Existing tech of blind spot monitoring and a reversing camera are now complemented by a front view camera and smart rear-view mirror to improve visibility in areas that would ordinarily be obstructed from view. 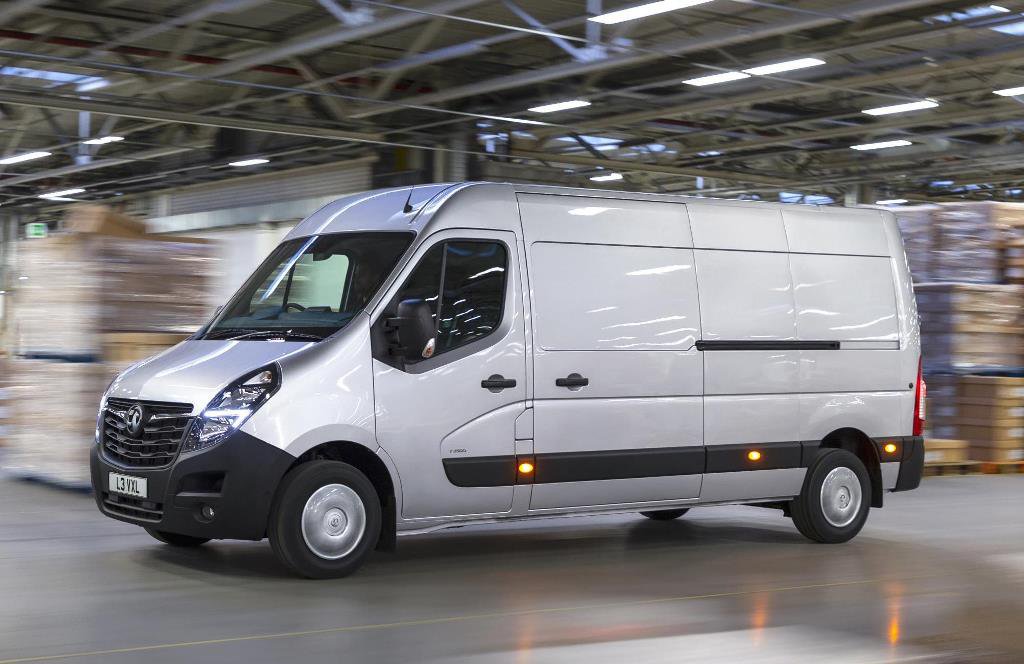 On sale this summer, Vauxhall has revealed the first images of its new Movano large van. It is clearly identifiable as a Vauxhall, sharing many design elements with other models in the brand’s range of panel vans.

The Movano is available in four different lengths and three heights, carrying a maximum payload of up to 2,110kg and 17m3 of cargo and in certain configurations, the van can transport up to five euro pallets. A total of 150 different versions of the Movano are available ex works, allowing for numerous conversions for specialist requirements.

Inside the new Movano cabin, the seats are multi-adjustable with optional lumbar support for driver and passenger. The large van may also be ordered with an air-cushioned driver’s seat which is ideal for bumpy and uneven construction sites.

LED lighting in the cargo area makes the Movano easier to use in low light conditions, while new handles on the side-walls and pillars offer further convenience.

New on the safety front is a rear vision camera system which displays via the seven-inch touchscreen, along with a blind-spot monitoring system and lane-departure warning. Also standard on all models is side-wind assist, which offers greater stability in crosswinds.

Connectivity and ICE has also been improved thanks to the Navi 5.0 IntelliLink Pro infotainment system, which is available for the first time on new Movano. The system features Apple CarPlay and Android Auto integration, with the interior featuring a wireless charging point for smartphones.

To register your interest in leasing the new Vauxhall Movano, please call our friendly and helpful sales team on 01618 269716. 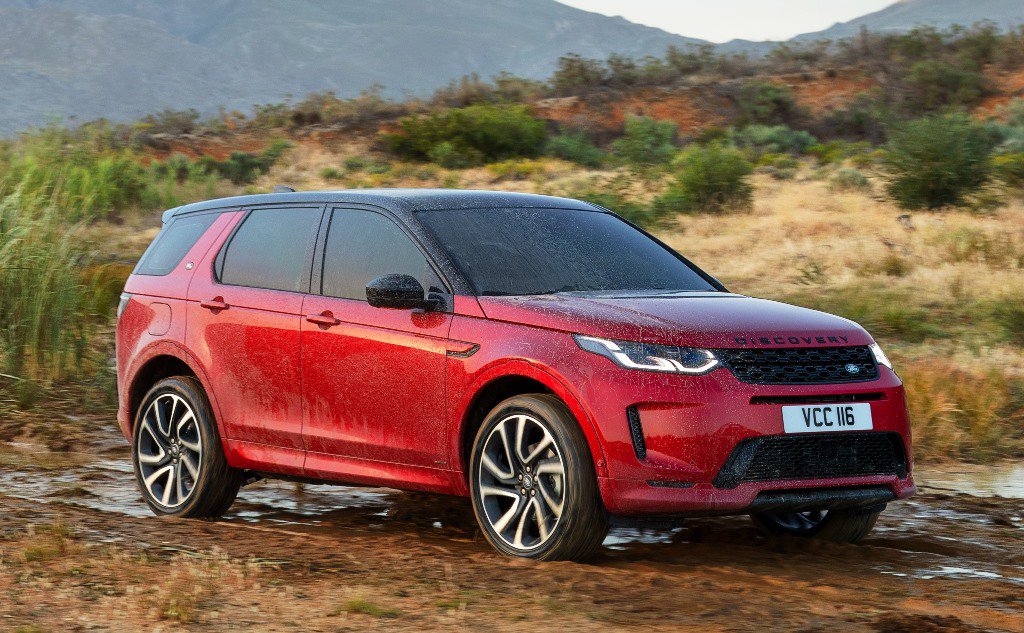 Sales order books have opened for the refreshed 2019 Land Rover Discovery Sport, which arrives with even more technology and a new mild-hybrid engine option borrowed from the new range Rover Evoque launched earlier this year.

The styling changes for the new Discovery Sport are significant with the model getting new, angular headlights with LED running lights running along the lower edges. The front fascia has a less fussy appearance with vertical inlets on either side. The changes are similar at the rear where there are square-shaped lamps with a pointy edge on each side and a simplified bumper now conceals the exhaust pipes.

The mild-hybrid delivers CO2 emissions from as low as 144g/km CO2 and WLTP fuel economy up to 40.9mpg. An even more efficient plug-in hybrid electric vehicle (PHEV) variant will also join the range later in 2019. But the most efficient Discovery Sport model will be the 2WD 148hp diesel with manual transmission which has emissions from 140g/km of CO2 and fuel economy of around 48mpg.

Land Rover has also given the interior of the 2019 Discovery Sport an overhaul, including adding Luxtex upholstery (Evoque) from recycled polyester microfibre that has a look of suede about it. Other tweaks include 40:20:40 split second row seatbacks and, for those less fortunate to be in the third row, there are now new cup holders. To stay connected, wireless charging is available, in addition to USB and 12-volt ports.

A revised centre console incorporates a standard 10-inch infotainment display and the multi-function steering wheel gets capacitive switches. The new tech also includes a smart rear view mirror (Evoque) that offers a video feed from the back with a 50-degree view of what's going on behind the SUV.

To register your interest in the updated Land Rover Discover Sport, please call our sales team on 01618 269716. 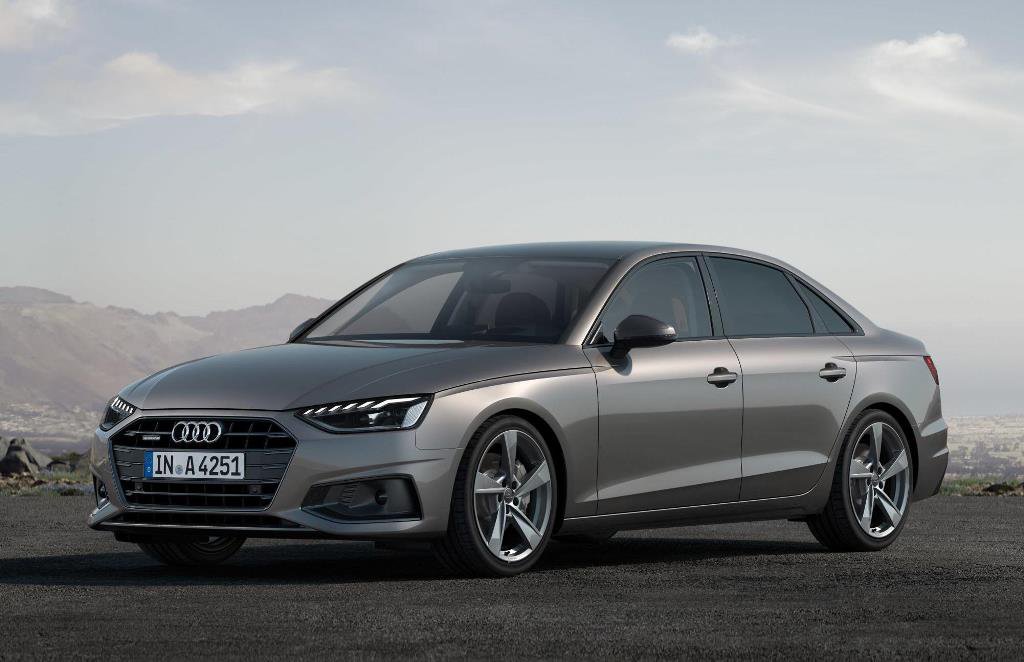 With its UK arrival set for September, the facelifted Audi A4 line-up for 2019 has been revealed with updated styling, a revised interior, extra technology and a new range of engines. The updated A4 will be in direct competition with the new BMW 3 Series, plus the Mercedes C-Class and Jaguar XE, both of which have been recently updated.

The facelifted A4 has been redesigned to the extent that only the bonnet, boot and roof panels are carried over from the outgoing model. At the front is a widened front grille that sits lower and features horizontal slats for SE and Sport trim levels, with the Allroad, S line and S4 variants getting vertical chrome slats. The restyled front bumper has larger air intakes compared with the outgoing car, with contrasting black or silver accents depending on the trim level.

All facelifted A4 models get new headlights, with LEDs now standard on all trim levels. More powerful matrix lights are available as an option. The rear of the car receives the same treatment, with a new rear bumper design and restyled rear light clusters.

Inside, the facelifted A4 replaces the previous scroll wheel infotainment control setup with a new centrally-mounted 10.1-inch touchscreen. An updated version of Audi’s optional 12.3-inch Virtual Cockpit digital dial cluster is also featured with a trio of new display interfaces and a head-up display. Similar to the outgoing car, Audi will offer option packages to further upgrade the A4’s interior tech, including optional driver assistance packages.

Three turbocharged 2.0-litre petrol engines are also available, consisting of the 148hp ‘35’ TFSI, the 187hp ‘40’ TFSI and the most potent 242hp ‘45’ TFSI. All of the new engines feature a 12V mild-hybrid system and electric compressor helping to lower emissions and improve fuel economy.

The facelifted S4 TDI model sits at the top of the A4 range and offers a potent 342hp turbocharged 3.0-litre V6 diesel engine paired with a 48-volt mild-hybrid system.