The original Fiat 124 Spider was first revealed at the 1966 Turin Auto Show. Designed by Tom Tjaarda (he of Ferrari 365 California and De Tomaso Pantera fame) at the revered design firm Carozzeria Pininfarina, production started later that year at Fiat’s Lingotto facility in Turin. It was eventually made available in the UK, but only in left-hand-drive configuration.

The new Fiat 124 Spider is a front-engine, rear-drive, two-seat roadster designed at Fiat’s Centro Stile facility in Turin. The car takes inspiration from the 1966 original, not only in terms of its proportions and stance but also in terms of its detailing.

The car started life as an Alfa Romeo roadster, but Fiat Chrysler Automobiles CEO Sergio Marchionne (R.I.P.) was adamant that, for the new car to wear an Alfa Romeo badge, it would have to be built in Italy. And so, the Fiat 124 Spider was born. 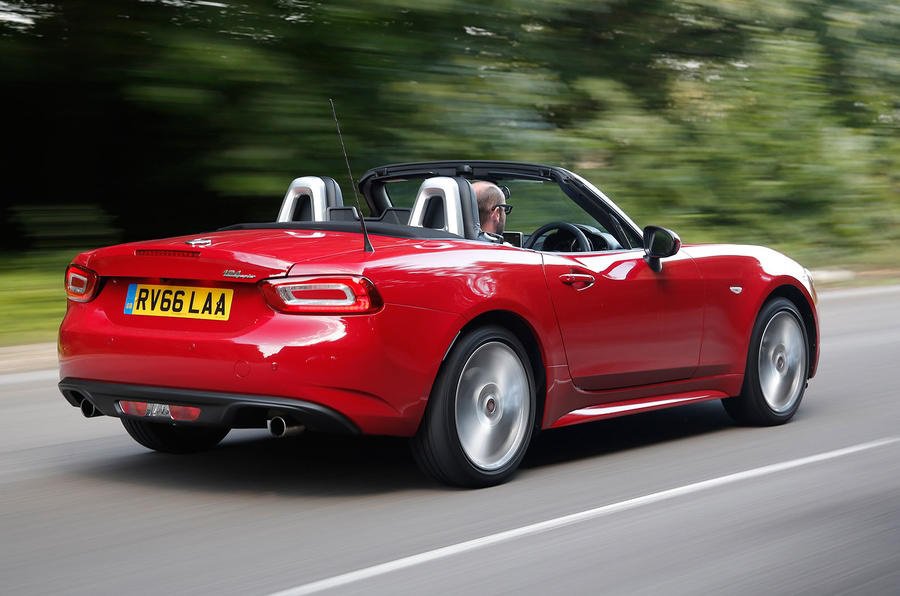 Based largely on the fourth-generation Mazda MX-5 roadster and manufactured alongside it at Mazda’s Hiroshima plant in Japan, the Fiat 124 Spider shares the Mazda’s platform, some nether mechanicals, much of the interior, the manual soft-top mechanism and the windshield. However, it features Fiat’s own turbocharged 1.4-litre MultiAir four-cylinder engine, unique exterior styling and increased length and cargo capacity over the MX-5.

Is this a smart move by Fiat? Of course it is because, if you want to include a nifty sports car in your model line-up, your starting point need be no further than the best-selling two-seat sports car in the world for the past 28 years. 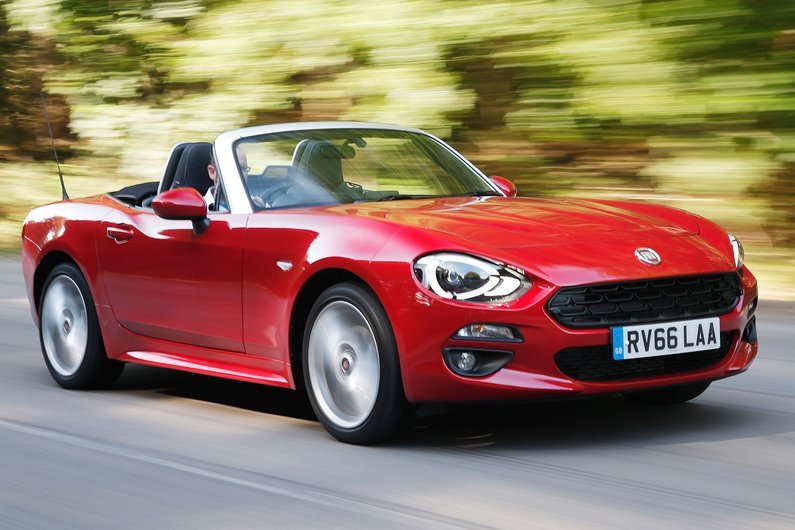 While the Fiat 124 Spider may well be a ‘reworked’ MX-5, every exterior body panel is different and the Fiat looks nothing like the Mazda, which is a good thing.

The Spider’s front end sports an elegant version of the original’s flattened hexagonal grille and the headlights are carved into the bodywork, much like the ’66 classic. The dual bulges on the bonnet lid also remain, but are now largely cosmetic; the original bulges were designed to facilitate the dual-overhead-cam engine underneath. 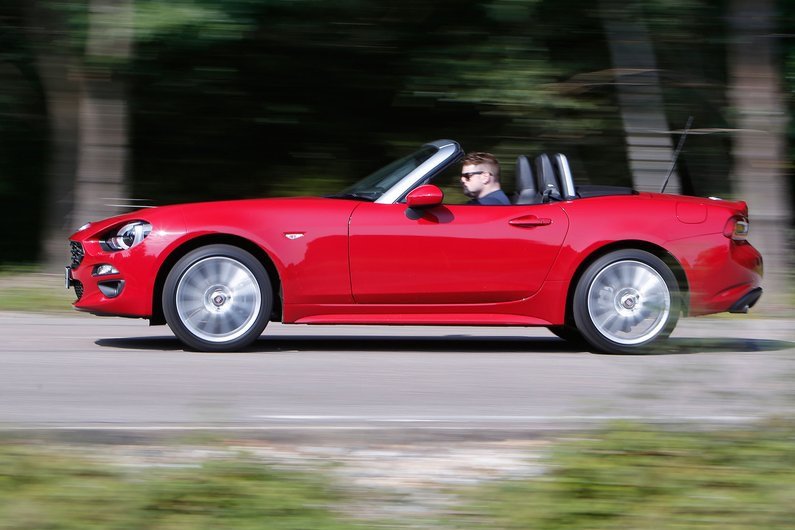 In profile, the 124 Spider doesn’t have the donor car’s descending front end. Rather, it extends roughly three levelled inches further than the Mazda and the rear boot lid is also a couple of inches longer. The additional five inches affords the Spider a classier, ‘squared-off’ and less aggressive stance all of which is reminiscent of 1960’s Italian styling. An extrusive crease line that begins behind the front wheel arch and runs into the door handle pays homage to the original Spider. 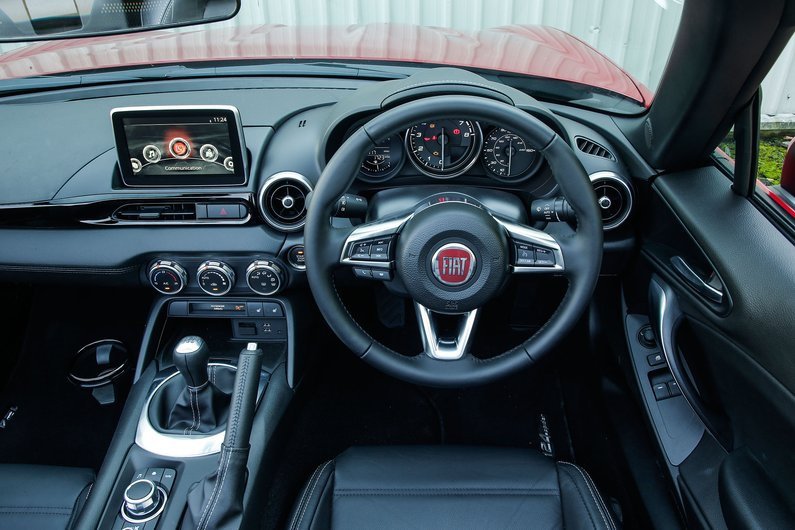 Given the Spider’s compact footprint, it is no surprise that the interior may best be described as cosy. But, as ground-hugging sports cars go, getting in and out isn’t too difficult thanks to the narrow sills and shallow seat bolsters. However, head and leg room will be scarce for those gifted with excess height.

The leather-clad steering wheel is comfortable and satisfying to hold, but still only adjusts up and down, not in and out. Also, there is no dash-mounted glove box, but rather a storage bin in between the seats.

Fiat changed the instrument gauge faces, added a few soft-touch materials, reworked the door panels, and screwed on their own squared-off gear shift knob. Fiat also specified its own seat fabric and padding and the seats themselves are comfortable and the materials feel high-quality. 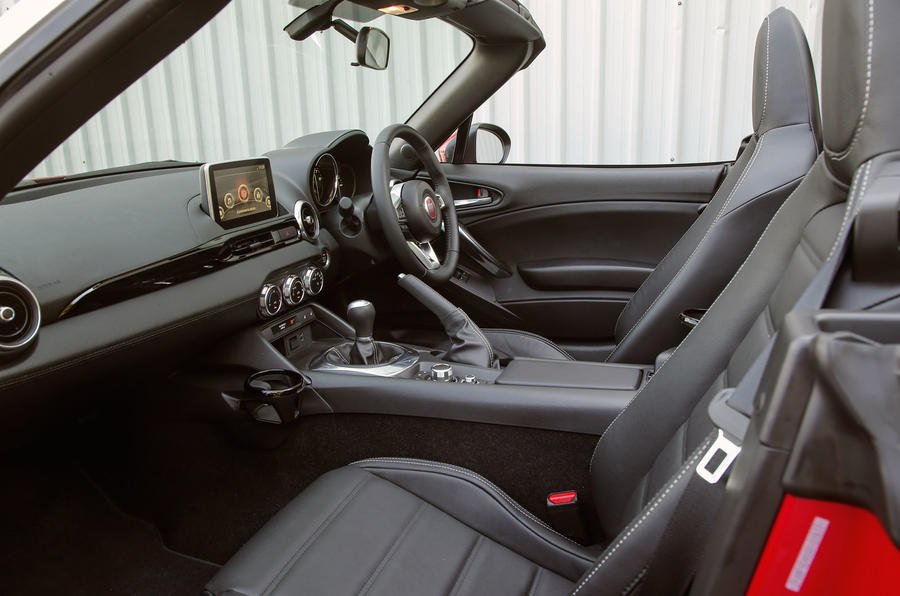 Good quality, soft-touch plastics cover the majority of the interior and feel good to the touch. The manual HVAC dials are blissfully simple and easy to use, as is the touchscreen that is the centrepiece for the dashboard. The interface’s menus are intuitive and require little attention from the driver to operate successfully. It is otherwise controlled by a poorly-located rotary dial.

The non-electric convertible top is light and very easy to use, taking around four seconds to open or close. With just one hand, you simply unlatch the locking mechanism above the rear view mirror, pitch the top over your shoulder and push down to click-lock in place…voila! Raising it is just as simple and effortless. The roof is very well insulated and keeps things reasonably civilised inside by suppressing road, traffic and wind noise from outside. 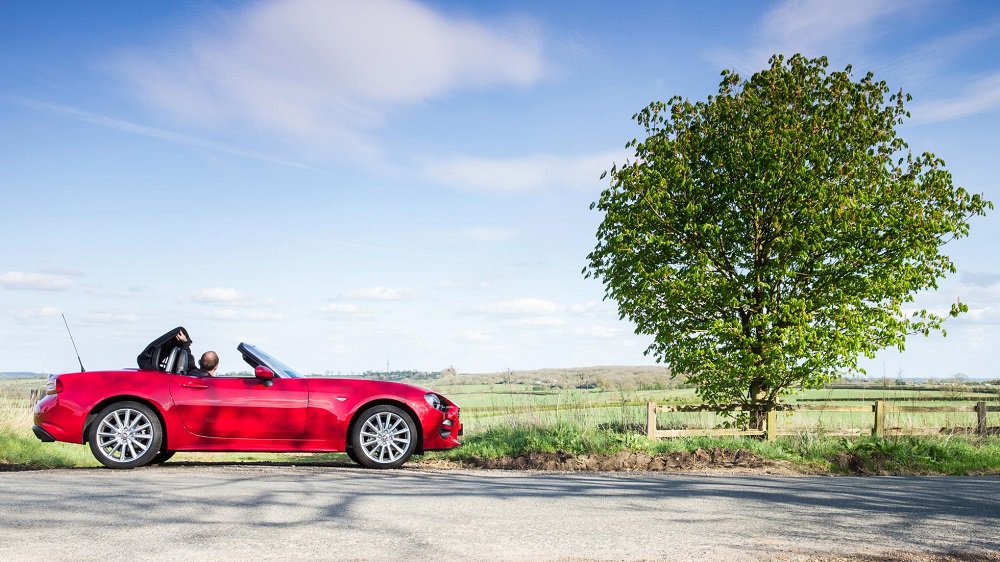 Due to the nature of the beast, the primary focus by the engineers at Fiat was on making this two-seater roadster a car that both looked good and was fun to drive. At just 140 litres, the Spider’s boot is quite small by sports car standards. But, it’s a deep, practical shape and is well up for a few weekend away bags, or the weekly shop. 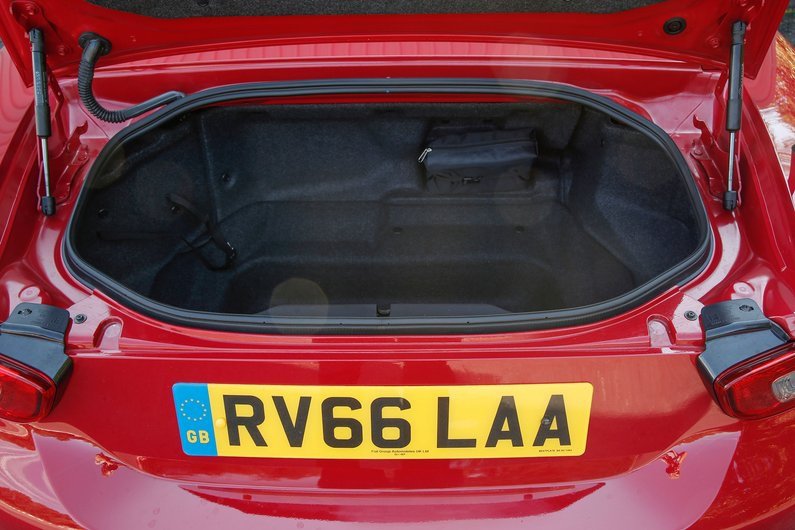 The Fiat 124 Spider is available in four trim grades; Classica, Lusso, Lusso Plus and S-Design.

S-Design adds heated seats and a few cosmetic flourishes that separate it from others in the range, such as dark alloys, an Italian flag, gunmetal grey A-pillar and roll bar covers and red stripe side stickers. 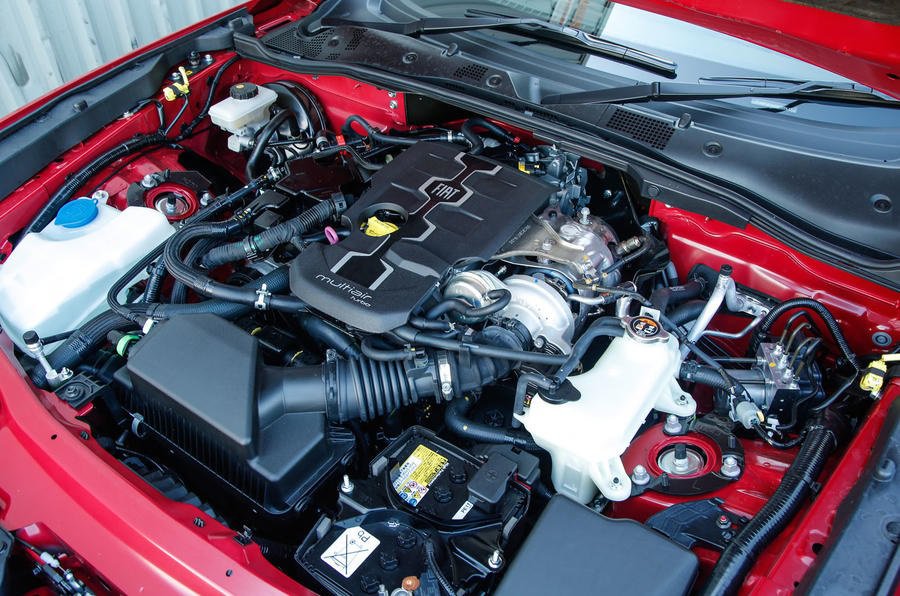 Fiat is offering only one engine on the 124 Spider…the same four-cylinder, turbocharged 1.4-litre MultiAir found in other current Fiats, including the feral 500 Abarth. The engine is assembled in Italy and shipped complete to Japan to be installed during final assembly.

Deployed in the 124 Spider, it delivers 140hp and 240Nm of torque from 2,250 rpm. Maximum turbo boost pressure peaks at 2.94 bar and winds up quickly but some lag is present. This is easy to mitigate by keeping the revs above 2,000rpm.

Despite more horsepower and torque, an increase in size and weight makes the 124 Spider a little less spirited off the line than the MX-5, though the exhaust note adds to its thoroughly enjoyable Italian flair and fits squarely with the character of the original 124 Spider which, at the time, was every poor man’s take on a Ferrari.

A manual six-speed gearbox is standard across the range, with a six-cog automatic available as an option only on the Lusso Plus trim grade. 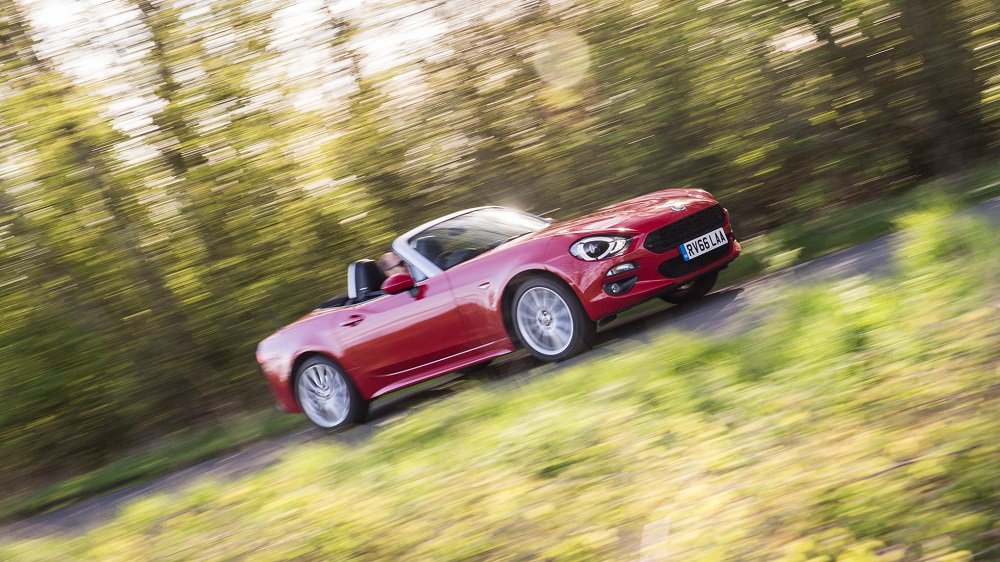 The Fiat 124 Spider certainly has a sporty Italian character; but instead of begging you to seek apexes, it yearns for elevated sweeping mountain passes and a more genteel Grand Touring pace. It’s less edgy and more compliant that its Japanese counterpart.

Still, the 124 Spider is a tremendously fun machine, offering a planted and well-balanced chassis and adequate of power to tackle any road. Engine and road noise are well supressed and the suspension feels slightly more forgiving. The manual transmission is excellent in everyday use and the pedals are well set up for effortless heel-and-toe shifting for those that prefer it.

Driving the 124 Spider is a cinch. The precise steering and rear-drive layout offer plenty of confidence when entering a corner at high speeds. The compliant suspension dampens road imperfections and harsh impacts, making it suitable for extended B-road stints. 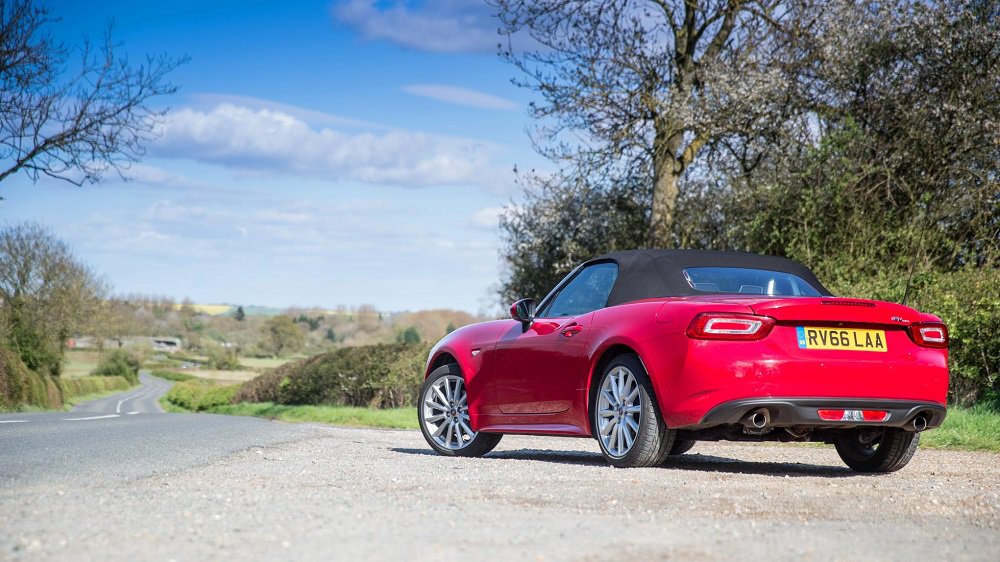 The Fiat 124 Spider is quite a lightweight sports car that should be relatively cheap to run. The 1.4-litre engine is quite economical and doesn’t need to be worked too hard which would impact on fuel consumption.

The combined cycle 44.1mpg from the 1.4-litre turbo petrol engine is good for a sports car and CO2 emissions of 148g/km are reasonable. Road tax will cost you £145 a year and it falls into insurance groups 25 and 26. During the test week, I achieved 43.9 mpg over 249 mixed miles at an average speed of 31 mph.

The 124 Spider has a three-year 100,000-mile warranty like other new Fiats, with the first two years being provided by Fiat UK and the third year by your Fiat retailer.

Service intervals for the Fiat 124 Spider are 9,000 miles or 12 months, whichever comes first. Servicing costs are likely to be relatively low, and a fixed-price servicing package from Fiat means budgeting for maintenance should be a cinch. 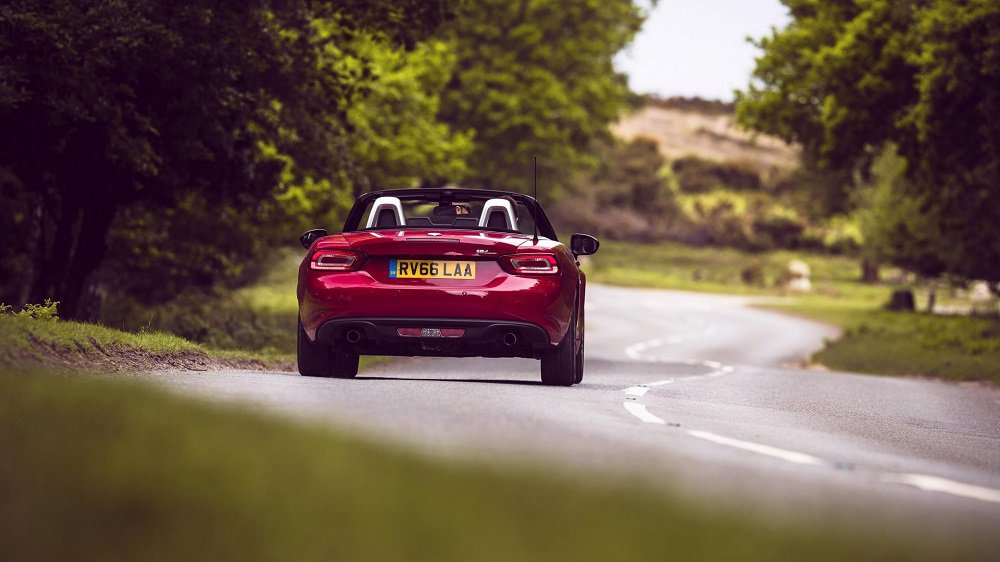 The Fiat 124 Spider is a sports car you buy with your heart: it looks great, is tremendous fun to drive and is reasonable value for money. It offers a decent ride and our testy British roads do little to negate its enjoyment. The turbocharged engine gives it the flexibility to be fun for longer trips too.

Overall, it’s more comfortable, powerful and quieter than the Mazda upon which it’s based, but adds to its sense of adventure and fun.