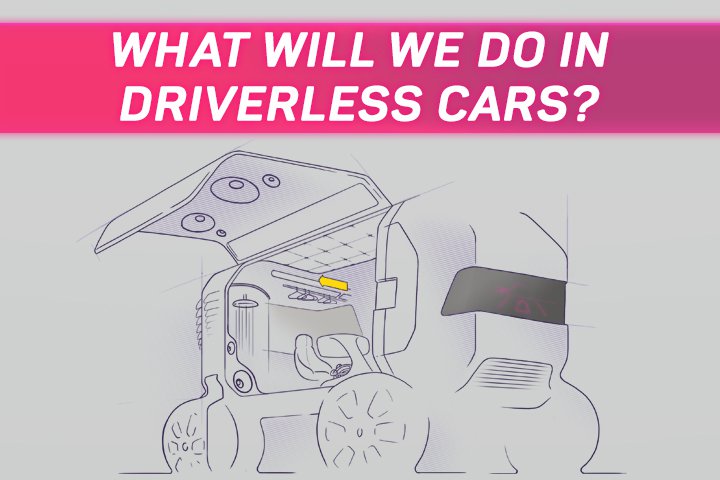 What Will We Do In Driverless Cars & What Will They Look Like?

The future is going to be driverless. Right now, automakers and leading tech companies are investing hundreds of millions of pounds in producing truly driverless vehicles.

But, once we’re freed from having to drive our cars, what would we actually want to do in them?  To answer this question, we conducted a survey to find out what you’d most want to use that free time for, and here are the most popular responses:

Why not take a look at our concepts and see which one would be best for you?We then took these answers and created some concepts around what driverless cars would look like once they’re designed to suit lifestyles, rather than for driving needs. All of these are fully electric (so no pesky engine space) and fully automated (so no need for a steering wheel).

This was part of a larger study that looked at who we trust the most to make driverless cars, who has invested the most money into driverless cars and how that money has been invested and who is closed to producing a driverless car. You can find that study here. 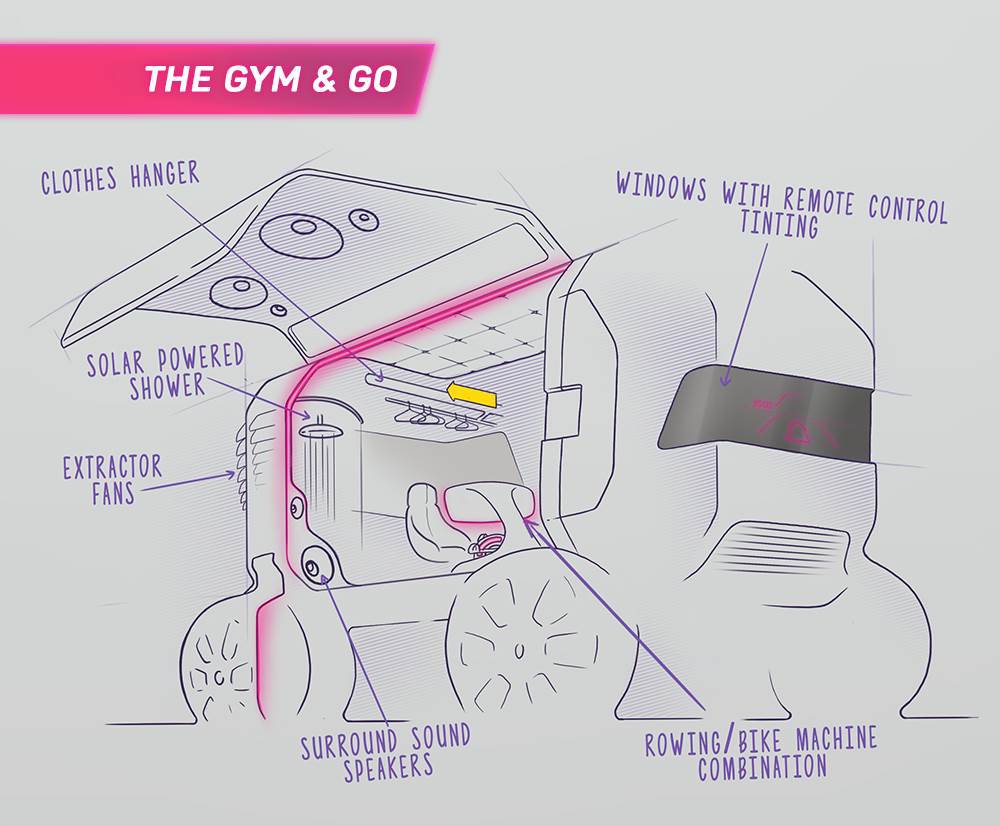 This car is for those who would want to work on their bodies while they’re on the move, which is apparently only 7% of you!

As working out is all about motivation, the rowing and bike machine combination will be connected to the engine. To keep the car going as fast as is safe, you have to keep working on the machine. Obviously, if you stop, the car doesn’t just stop too – you just go a couple of miles an hour slower.

When you’re working out, you need music. So surround sound speakers are a must.

The main problem with working out in your car revolves around cleanliness. You don’t want to get out of your car, dripping with sweat and wearing clothes that have been balled up. With that in mind, the Gym&Go includes a solar powered shower and a space to hang clothes. So, you can get out the car fresh as a daisy and not wearing clothes that are creased. You also want to make sure your car doesn’t smell like a gym, so we’ve included extractor fans within.

Not everyone likes to be on display when they are working out,so the windows will be dimmable by remote control. That way, you can work out safe in the knowledge that passing cars can’t see you, unless that’s what you want! 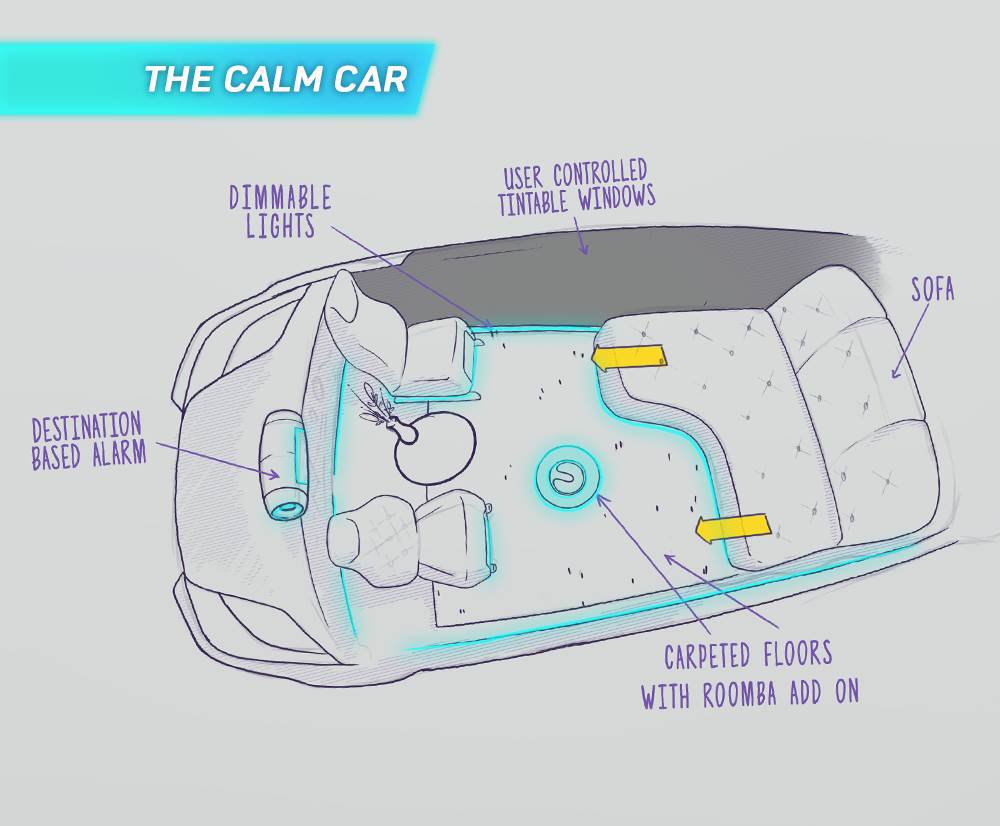 Reading was by far and away the most popular activity people would like to do in driverless cars, with 2/5 (40%) people saying that’s what they’d most prefer. Also, over 1 in 10 people (10%) said they’d like to spend their time sleeping, while one in twenty (6%) said meditating.

This car is designed for all these people who would like a moment's peace. Whether it be to read, meditate, relax or get some extra moments of shuteye. We envisage it being aimed squarely at the parent market.

There would be a large comfy sofa that would transform into a bed when needed. The floors would be carpeted. And, as you don’t want to spend your weekends cleaning dirt from your carpet, a Roomba add-on would be available.

One worry of this car would be it being so comfortable that you stay asleep once you’ve reached your destination. So, we added in a destination-based alarm. This alarm would go off when you’re a predetermined time away from your destination,allowing you to wake up with enough to time to freshen up prior to arrival. Windows would, again, be tintable on request. 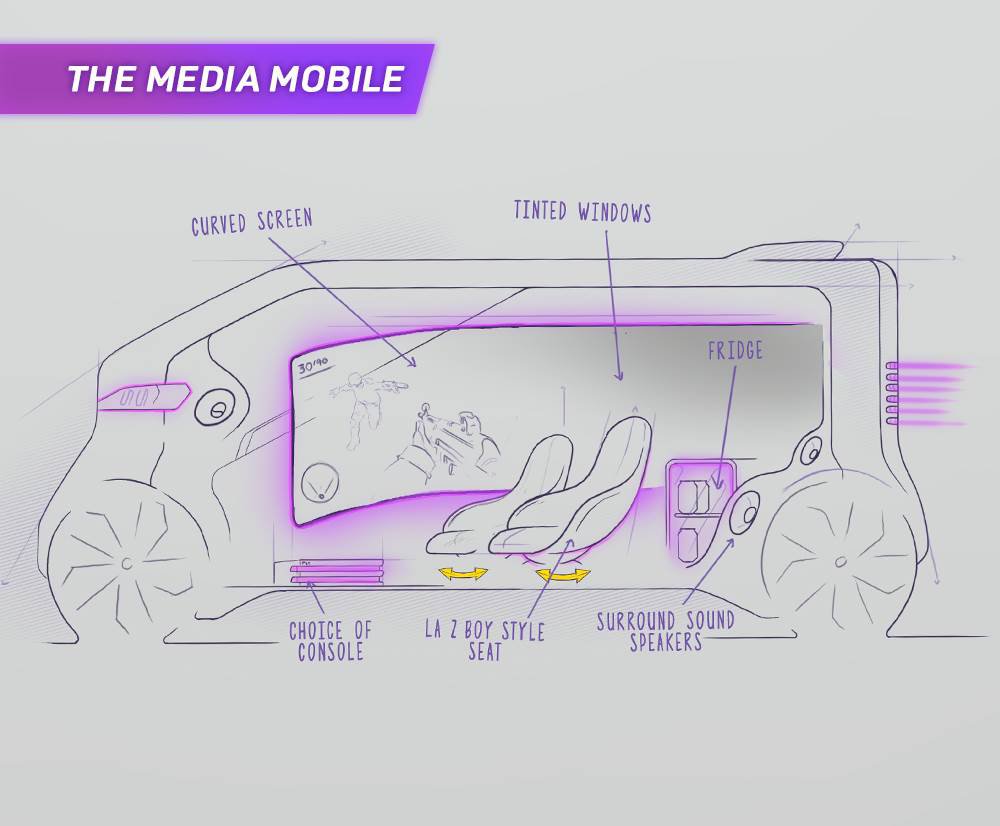 About 1 in 10 (10%) people said that they’d use their driverless car to play games and binge watch. And who can blame them when, in the future, you could fit in just one more episode before work?

This car comes with La-Z-Boy style seats, a fridge for drinks and snacks, surround sound speakers and a curved screen for a truly immersive experience. The windows will be tinted again, so you can cut yourself off from the world while focusing on your gaming. 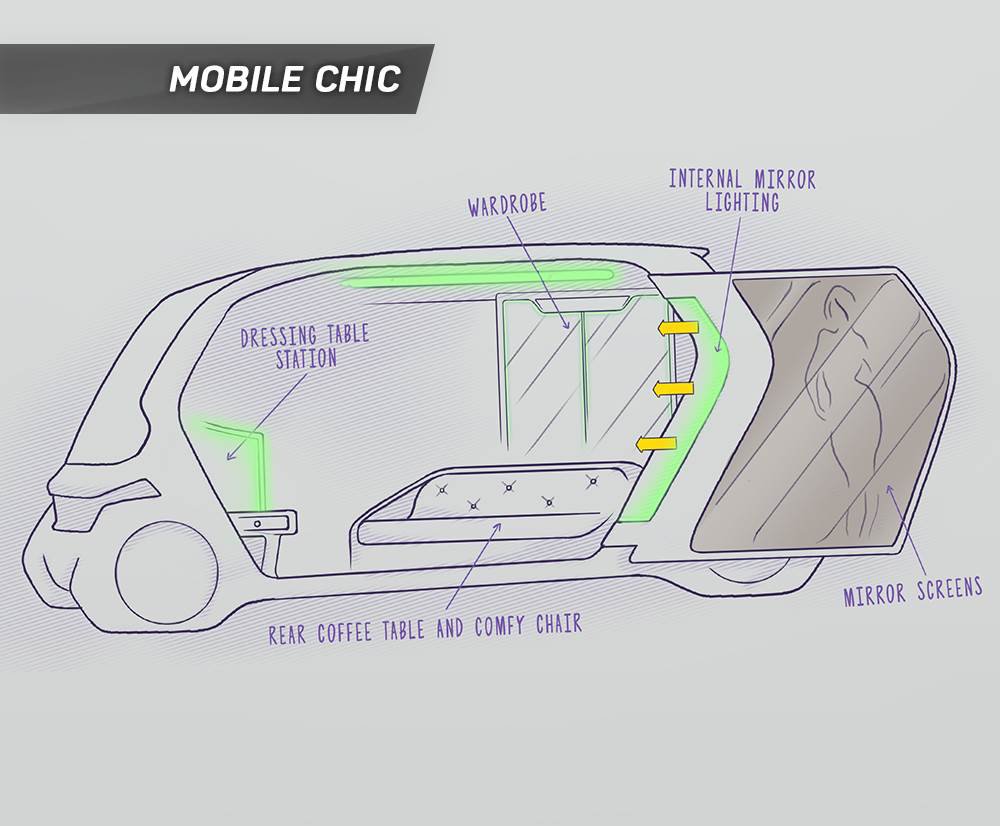 While only about 1 in 20 people (5%) said they would use their car to make the final touches to how they look, we still thought this would be a popular model.

It comes with great internal lighting, a dressing table and wardrobe. The internal side of the doors would also be full length screen,s allowing you to get a full view of how you look. When you’ve got yourself picture-perfect, you need space to recline in style. So we’ve added a stylish chair and comfy table for you to drink your coffee and read a magazine. 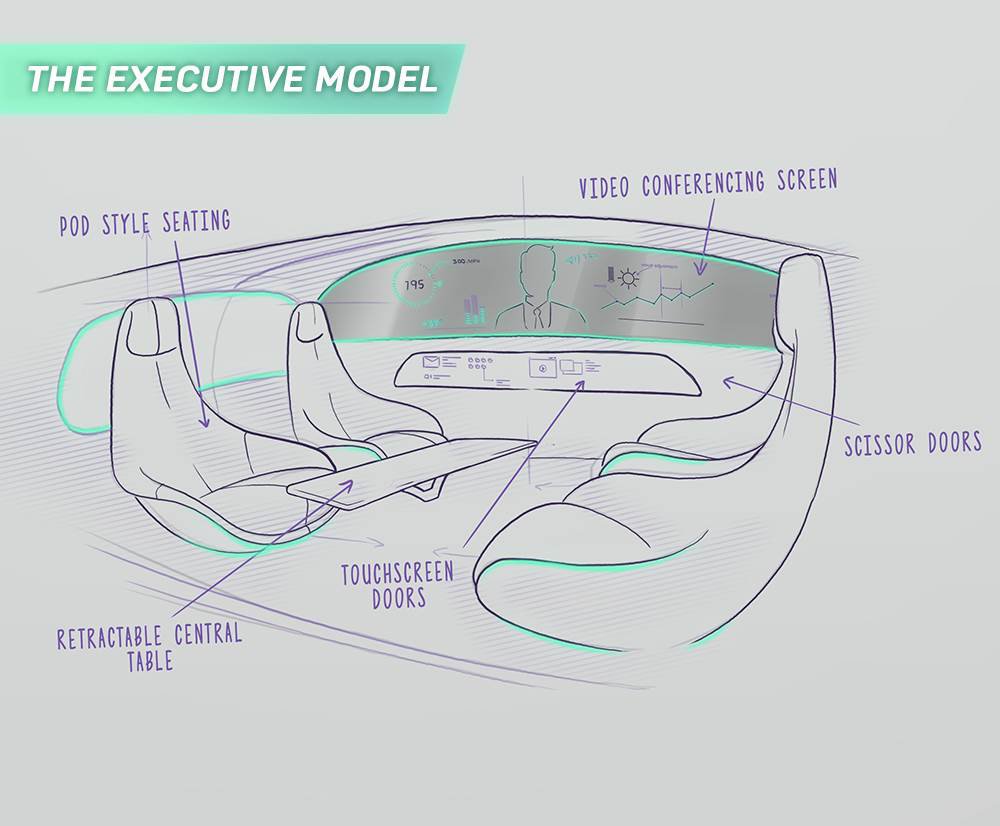 Sadly, a full 15% of people have already resigned themselves to the fact that they’d probably just replace driving with working. The Executive Model would make working on your way to work as easy as possible.

Pod style seating means you can use your car as a mobile meeting room, while the touchscreens on the doors are perfect for answering emails and reading reports. The windows would double up as video conferencing screens, allowing you to do virtual meetings and screenshare without leaving your car.

Clearly, laptops would still be a vital part of your working life. So we’ve added in a retractable central table to the middle of the car.If you like thinking about what cars will be like in the future, then you may also be interested in our article on when the cars of science fiction movies will be available in reality.