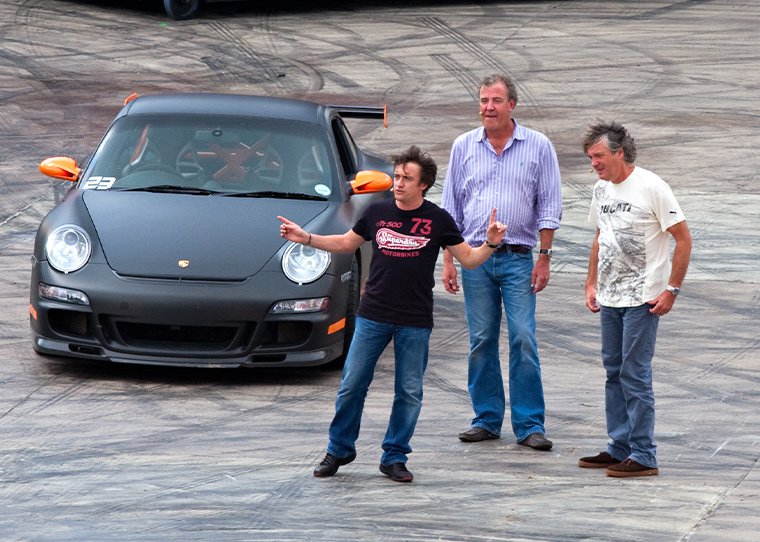 Whether it’s discovering driving heaven on beautiful remote mountain roads, test driving the latest super cars on their famous track or devising completely nonsensical challenges for each other, Clarkson, Hammond and May have blowing our minds for years with the best petrolhead program on telly.

The guys have now of course moved on to their own Amazon Prime series The Grand Tour, but we will always still love Top Gear, so to celebrate Leasing Options 30th birthday we’ve picked our top 30 moments of madness from everyone’s favourite car show.

Tensions run high as the guys take a road trip across Bolivia which culminates with a journey along Death Road, a fiendishly dangerous dirt track road just outside La Paz.

2. Driving across a desert in Africa

Whilst filming in Botswana a gruelling trip through the desert pushes both vehicle and presenter to the absolute limit.

A road trip through Myanmar takes in the incredible spectacle of a 20 lane motorway which is completely devoid of traffic.

4. Chased by rednecks in the USA

An ill-advised challenge in Alabama sees the boys decorate each others cars with slogans which don’t go down to well with the locals.

Clarkson demonstrates the indestructible nature and incredible power of the legendary Toyota Hilux.

Land ahoy! As a road trip requires the guys to pass over a body of water they adapt their vehicles into sea-worthy vessels, sort of…

Clarkson takes the world’s smallest car for a spin, the miniscule three-wheeler proves a little uncomfortable for the 6” 5’ presenter.

During a particularly impressive lap on Top Gear’s famous test track the actor’s performance earns him the honour of having a corner named after him.

The Friends star, who later goes on to become a Top Gear presenter himself, posts a record time on the test track.

10. James May breaks records in the Bugatti Veyron

Not normally known for his speed behind the wheel, the self-styled Captain Slow puts the Bugatti Veyron through its paces.

A road trip in Romania peaks for the guys as they reach the incredibly beautiful Transfagarasan Highway.

The culmination of a journey through France in three gorgeous super cars sees the boys reach the beautiful Millau suspension bridge.

13. Schumacher is The Stig

After years of speculation about who might be hiding under that famous helmet, The Stig, Top Gear’s own mysterious test driver, is revealed to be F1 champion Michael Schumacher. If only it were true!

Never known for their love of mobile homes, the boys decide to race each other with caravans in tow and it doesn’t end well.

As a bike trip through Vietnam reaches its climax, the presenters modify their vehicles in order to enter the high seas at Ha Long Bay

16. Driving to the North Pole

A race to the North Pole sees Jeremy sipping on G&Ts from the relative comfort of his Toyota Hilux as Hammond travels with huskies.

The Stig, Clarkson, Hammond and May battle their way through London traffic by car, bike, boat and public transport.

In one of the closest ever Top Gear races, one of the worlds fastest production vehicles takes on the Japanese bullet train.

The sedate three-wheeler is adapted to become a space shuttle, surely this won’t end well?

How far can you get on one tank of petrol? Clarkson, Hammond and May race from Belgium to Blackpool in their eco-friendly cars.

The presenters build themselves campervans and take them on holiday to Cornwall, what could possibly go wrong?

It’s May vs Clarkson as the guys attempt to play a game of rugby on the hallowed Twickenham turf in a fleet of Kia Ceeds.

A series of breakdowns don’t manage to detract from the incredible scenery during a trip through Patagonia.

25. Clarkson vs The Army

Soldiers shoot at Clarkson while he drives the Porsche Boxster S and Mercedes SLK attempting to avoid sniper-fire.

26. Driving over a lake in Iceland

Hammond somehow defies gravity and logic as he powers over a lake in Iceland in a super-fast nitrous-injected buggy.

27. Parachuting into a car

For perhaps the first time in history, James May sets up a challenge whereby a skydiver parachutes directly into a Mercedes Roadster.

Following his life-threatening car accident Hammond makes an emotional return to the show.

It’s Britain vs Australia as the boys take on their Top Gear counterparts from down under with a series of challenges.

The boys attempt an off-road race with a difference using a set of souped up mobility scooters.