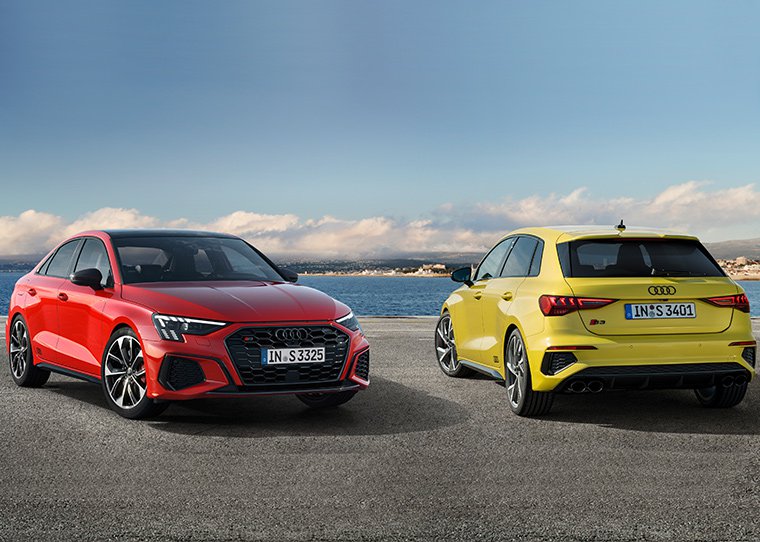 The fourth-generation S3 has been unveiled.

Audi's answer to the Golf GTI and Cupra Leon, the S3 has been unveiled in hatchback and saloon body styles which are available to order now. The 306hp S3 is powered by the now-familiar EA888 2.0 litre 4-cylinder Turbo, featuring in recent VW Group performance cars. The engine has seen some tweaks giving a top speed of 155mph, a 0 -62 of 4.8 secs whilst returning 39.2 mpg in both body styles. Quattro is standard and a seven-speed dual-clutch automatic gearbox gets the power to all 4 wheels. Riding 15mm lower than the previous version, the generation four S3 has the option to add a sports suspension package, enabling damper control capable of adapting in thousandths of second to the road conditions. Both the saloon and hatchback include subtle sporty elements over the standard A3 there is the addition of a rear diffuser and a quad, tipped exhaust. The front bumper has been reworked to include larger air intakes, new grille design and a front splitter. The interior has been given a similar performance makeover, compared to the standard A3 with sports seats and a revised gear selector, to make the S3 more engaging for the driver. The trim elements have been swapped out in favour of carbon fibre and aluminium. The driver as standard has a 10.3" digital instrument cluster, upgradable to 12.3" with Audi Virtual Cockpit, the fourth generation S3 features a new generation Infotainment system as standard incorporating a 10.1" touchscreen central in the dash, the software and processing power is said to be 10 times more powerful than the generation before, now including live traffic data.

As BMW now includes Apple CarKey on their models, the new S3 uses a similar system call Audi Connect Key, which allows the vehicle to be unlocked and started by an Android Smartphone, and then locked again at the end of the journey. The latest edition of Top Gear was celebrating the best of British and...