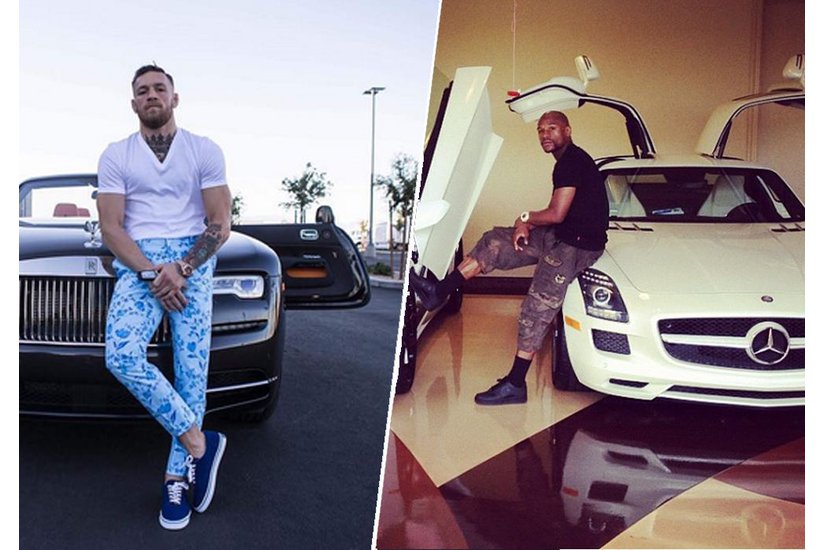 This weekend finally sees McGregor and Mayweather enter the ring to see if an MMA fighter can do the impossible and beat the undefeated boxing champ.

It's been billed as the biggest sporting event in history and will see both competitors walk away with over 100 million dollars each, and neither man is shy when sharing the fruits of their labour, at least on Instagram any.

We've taken a look at both fighters top ten cars to see who wins the car collection crown!

Unsurprisngly the British luxury brand features heavily in both lists, they've been making cars for the rich and famous for a over a hundred years after all. This is one of their fastest though and despite its boxy frame can do 0-60 in 4.4 seconds! 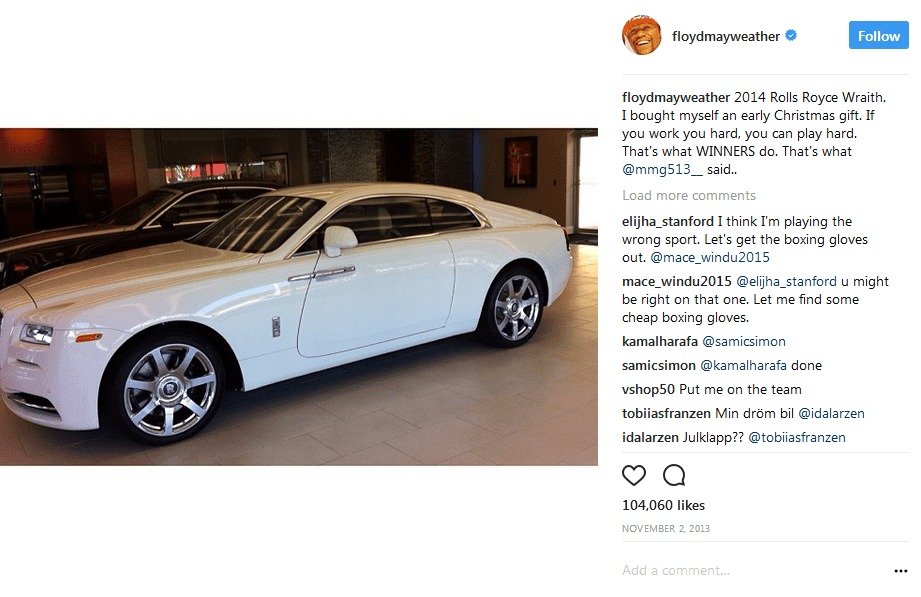 This car needs little introduction, the fastest street legal production car in the world, it's the top trump. 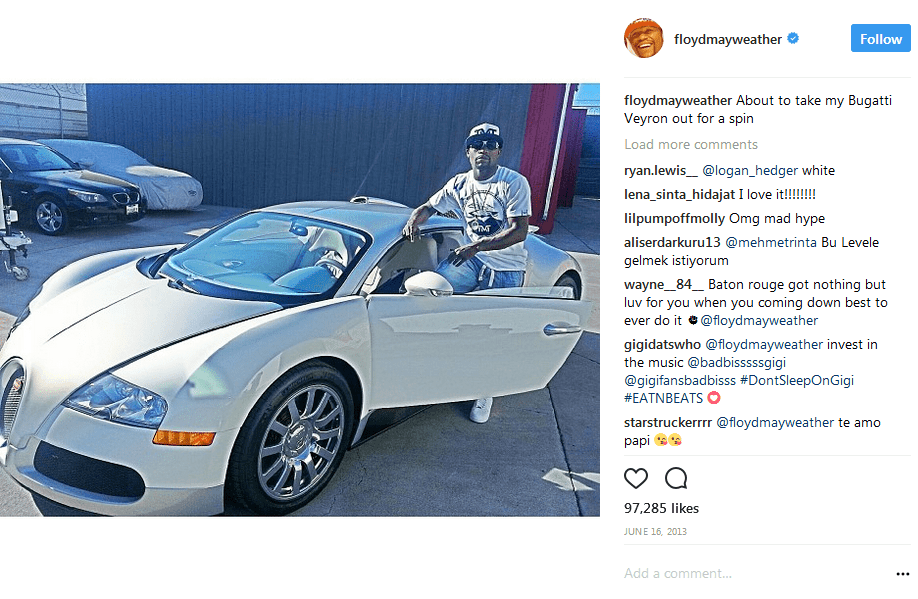 Not one for your shrinking violets out there, nothing says look at me like a convertible with more decking than my back garden. 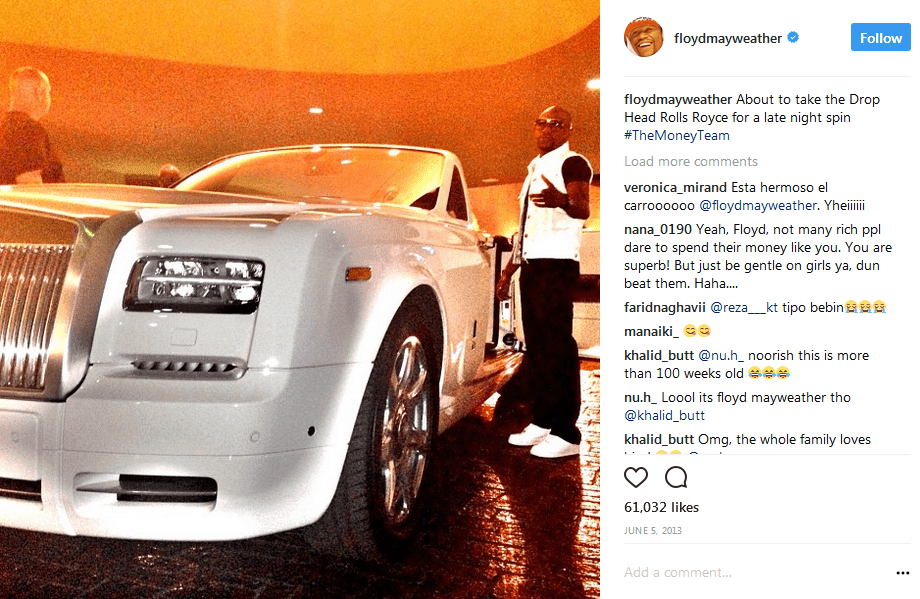 4 A pair of Ferraris

This Italian couple cost a cool £200k each, quite modest compared to some of the other cars on this list though. 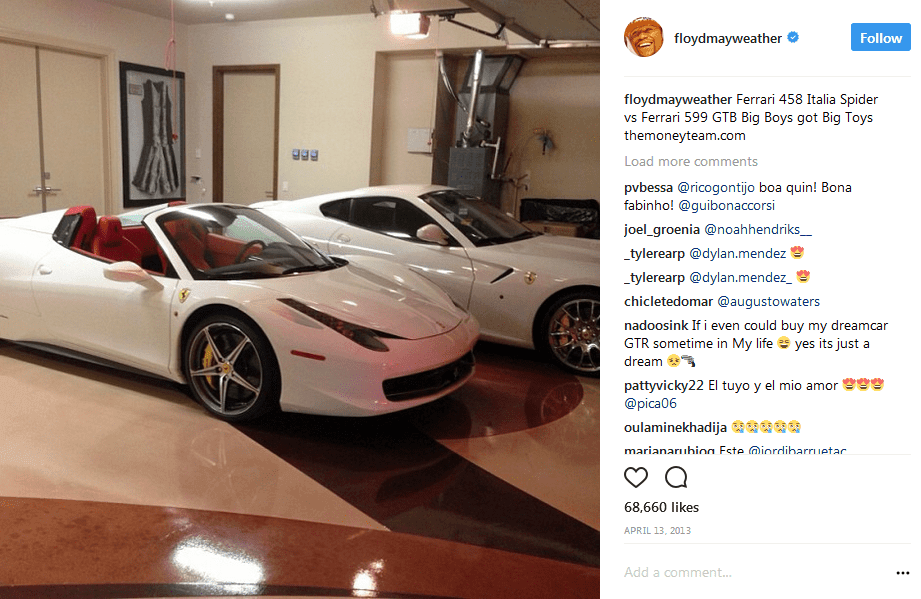 Nothing says supercar like a Lambo and the Aventador is a proper kid's dream car. The Mercedes on the other hand is a petrol head's machine, Lewis Hamilton and Jeremy Clarkson have both owned one. 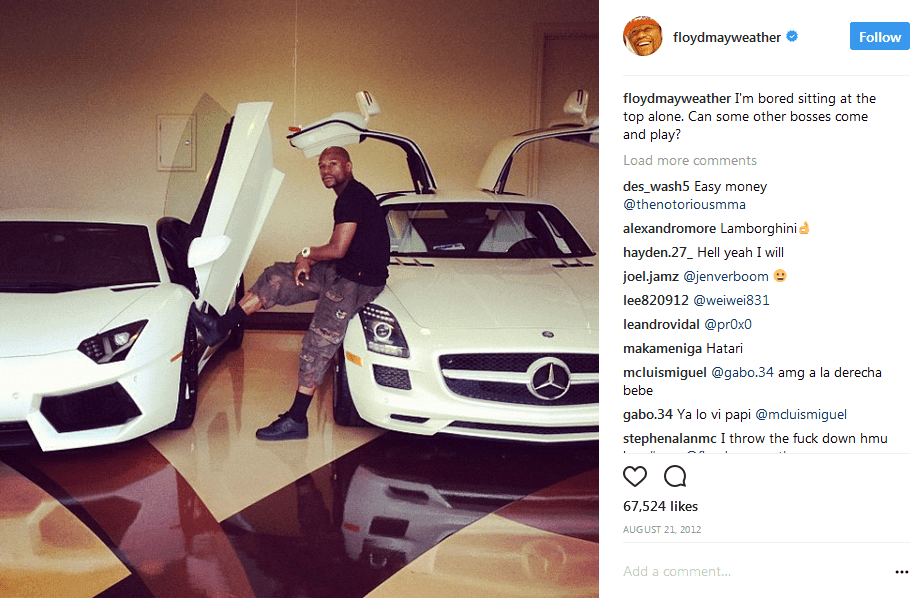 6 More Bugattis and a Private Jet

Three of the fastest cars in the world and your own airplane, bit better than my profle pic. 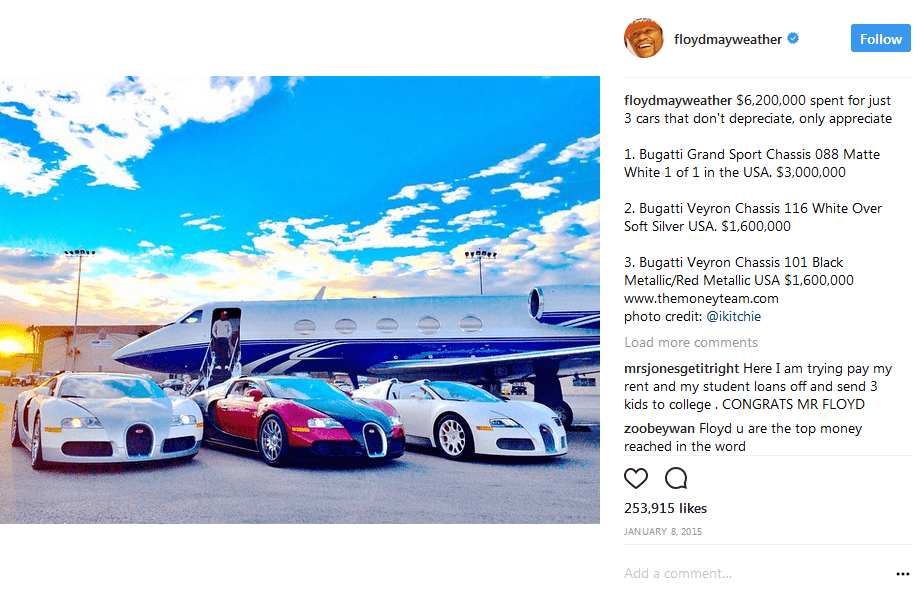 No collection is complete without a red Ferrari, the Enzo is named after the company's founder and is no slouch reaching 100mph in 6.6 seconds! 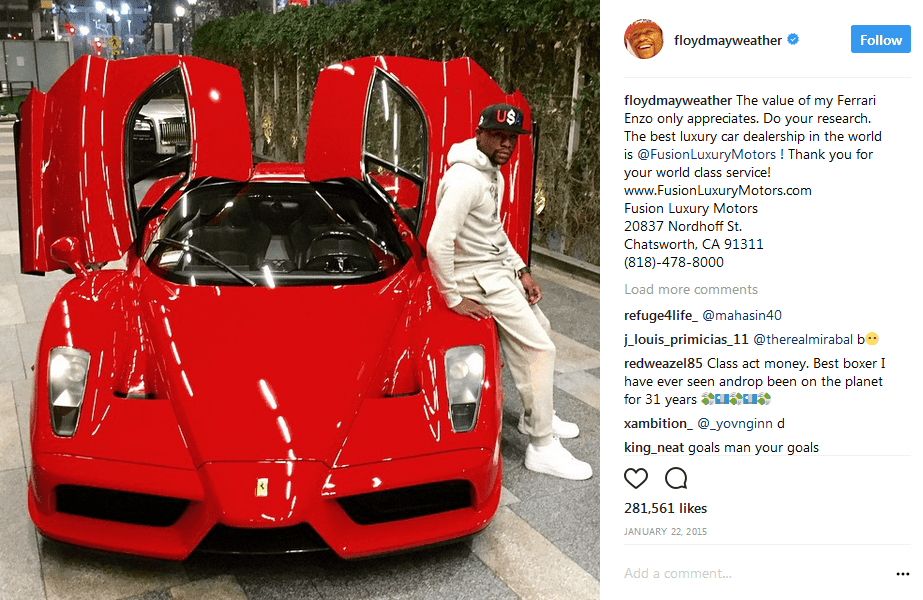 The most expensive car on this page by quite some way, $4.8m is a lot to pay for what was a six year old car at the time although most of these motors appreciate in value. I wonder how many miles were on the clock? 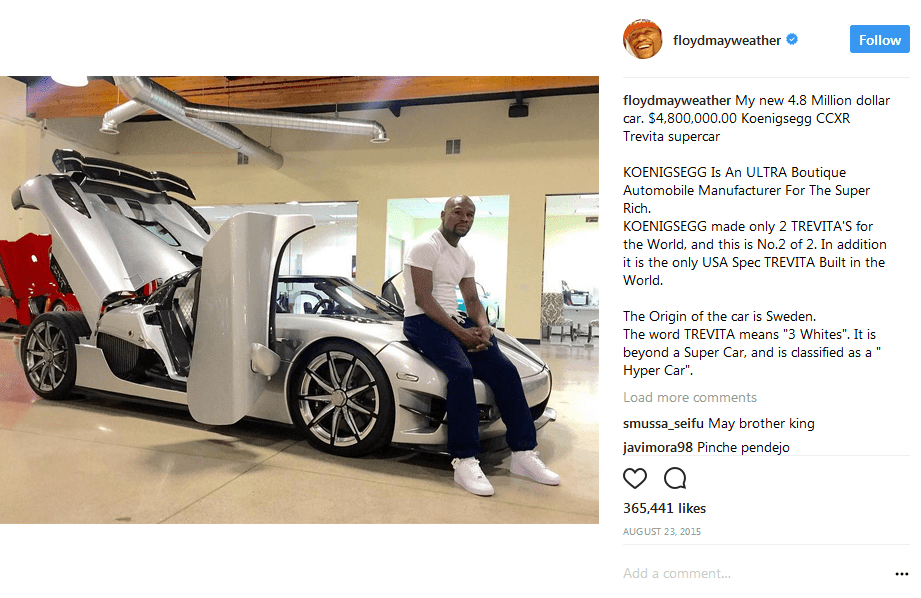 Favourite of British boxing champs, rumour has it Anthony Joshua has his eye on one of these, this car completes Mayweather's blinging fleet of rollers. Not strictly a car but this is too cool to leave out, Floyd Mayweather had this Bentley golf cart custom built for his son's birthday! 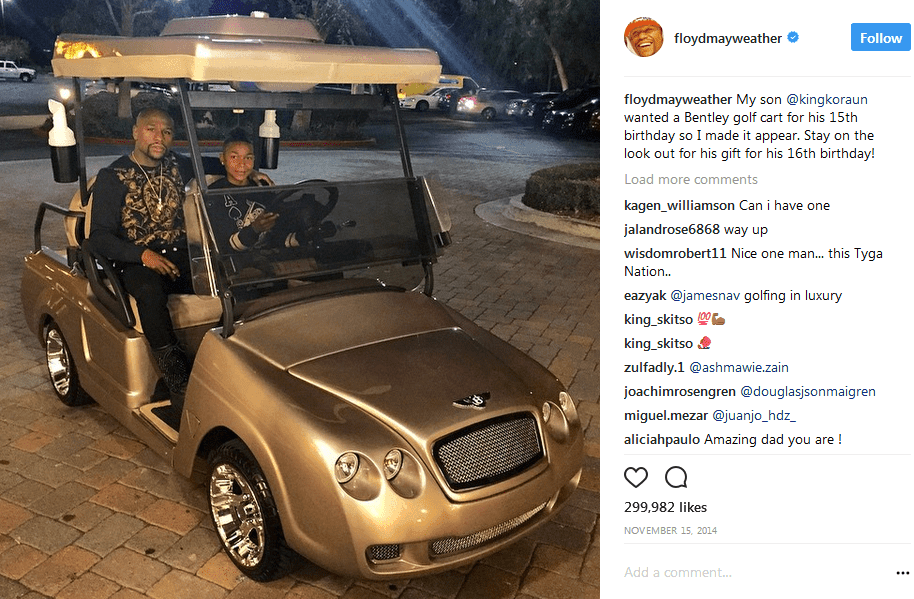 Not a bad place to start, although apparently this Lambo got towed recently when McGregor left it parked in Dublin on double yellow lines!

McGregor felt the wrath of this Wraith's owner recently when he got threatened with legal action for standing on the motor, which was just on loan from a Merseyside luxury car dealer. 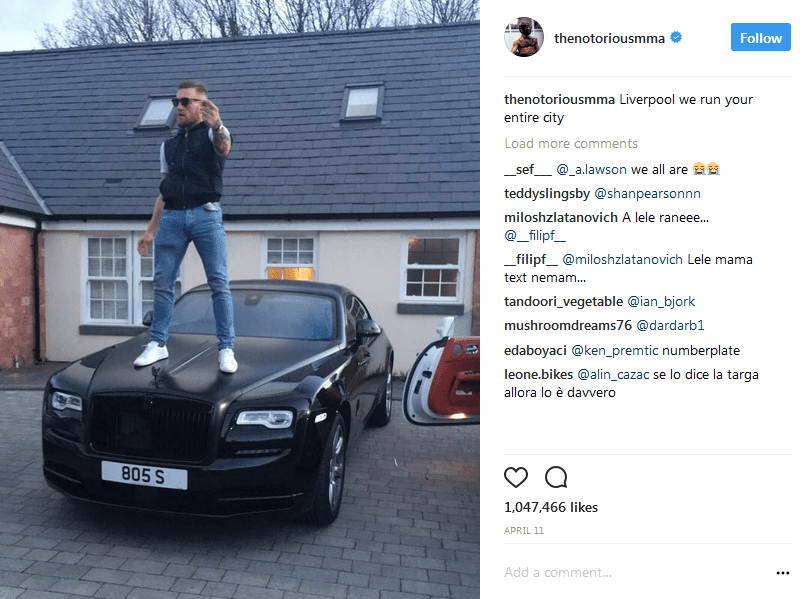 Not quite as expensive as some of the other cars on here but then there does seem to be a fair few Range Rovers in this picture! 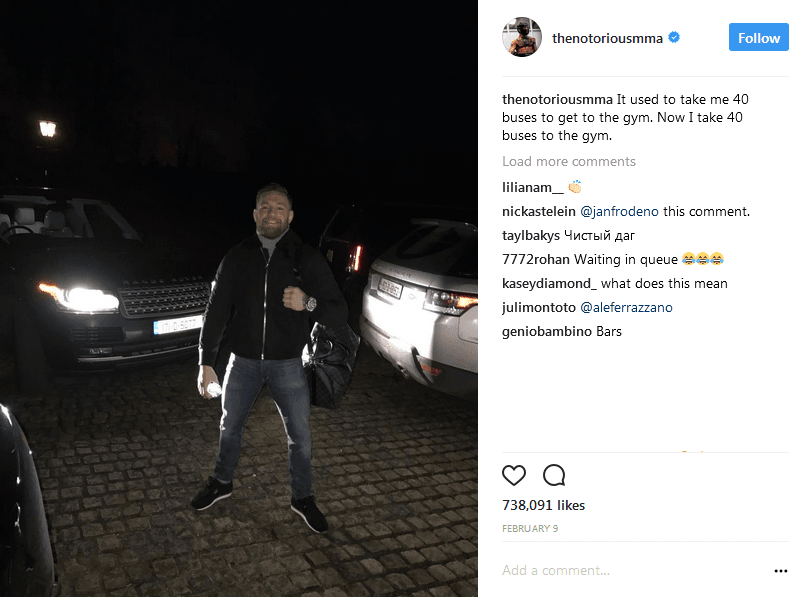 RR call it the sexiest car they've ever built, it's said to be inspired by the movie La Dolce Vita and certainly looks sweet to us!

Conor McGregor seems to have a habit of naming his cars, this is the Franklin. With over 100 vehicles I think Mayweather has probably got too many to give them all their own monikers!

McGregor recently got pulled over by the cops driving this in Dublin, it's certainly got the looks to stop traffic.

Apparently Conor McGregor plans to start importing super cars to Ireland, if he keeps buying green ones like this Lambo I'm sure they'll sell well.

Proving his green credentials McGregor owns a fully electric i8. This BMW is proof, if it were needed, that you don't need a petrol engine to make an amazing sports car!

He's clearly got good taste in pickups with this VW, you can read our review of the beast here.

Not quite a Bentley golf cart but nice try anyway Conor...