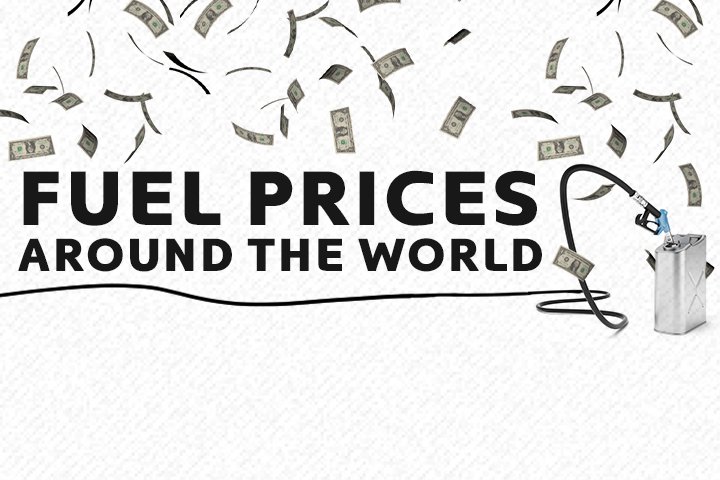 Fuel Prices Around The World

Here in the UK, we all love to complain about how much we’re having to spend at the pumps these days. What you may not know however is how much more other countries are having to pay for fuel compared to us. Below you’ll find the top 30 countries where both diesel and petrol are the most expensive as well as how much fuel you’d get in every country if you only spent $15. Some countries you’ll get more than a full tank, in others, hardly a few litres.

If we base our findings on a 50-litre fuel tank, to fill a full tank up at the petrol station in the U.K. you’ll need to pay around $78/£61, which is the similar scenario for most of the bigger countries in Europe. However, in the United States for example, you’ll find yourself only paying around $34/£26, which is a lot cheaper than most of the rest of the world has to pay.

See below for how many litres of fuel you’d get for $15 worth in each country. 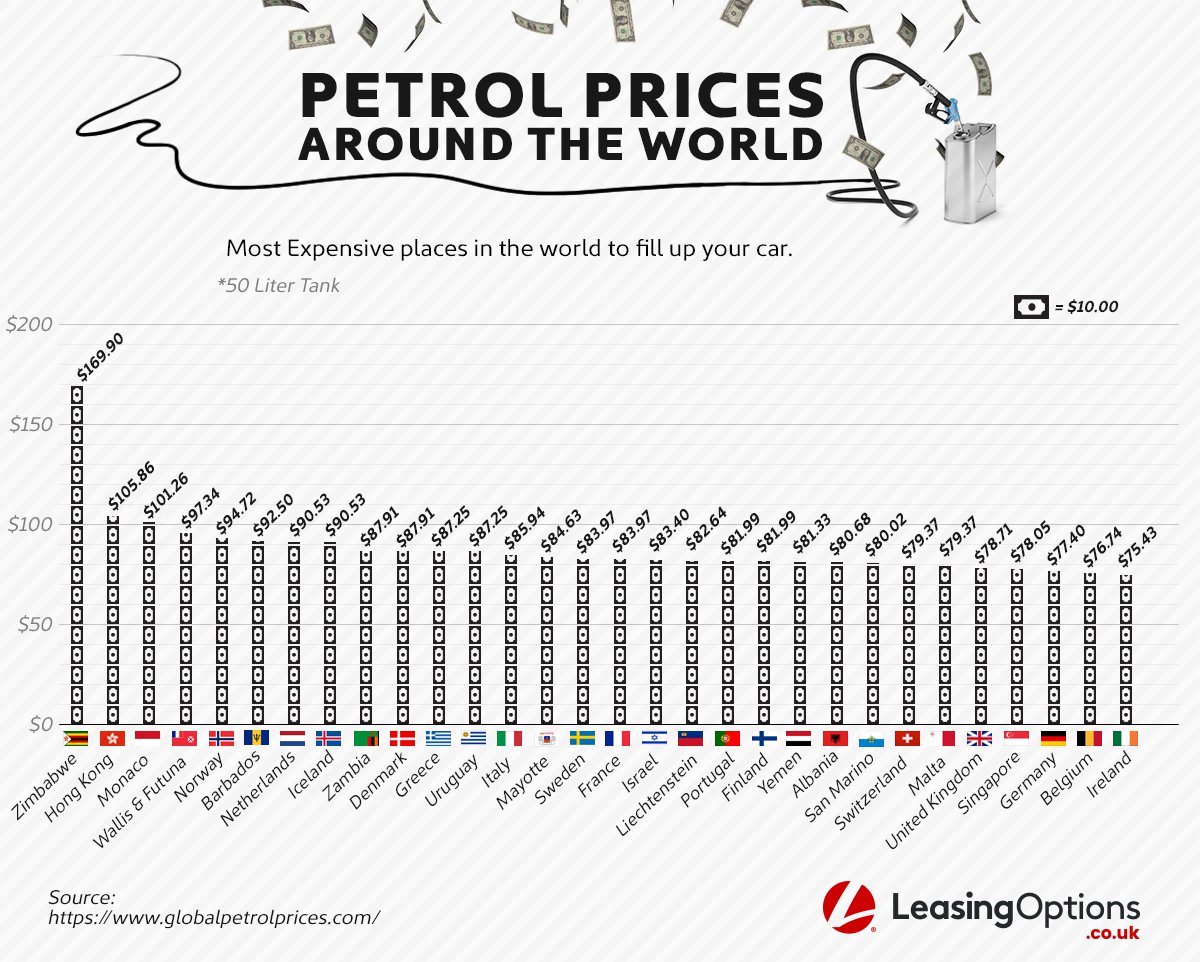 Take Zimbabwe as the prime example. It has the most expensive fuel in the world and by quite a margin. For a full tank of fuel, you’d have to pay over $160/£122! Zimbabweans would also only get a mere 4.7 litres if they filled up $15 worth and it’s worse with petrol, getting only 4.41 litres in their tanks. This becomes more astonishing when you see that Monaco, who are in third for petrol and second for diesel prices, get 7.6 litres and 7.07 litres per $15 respectfully, with a full tank costing around $101/£77, but we’re sure people won’t have a problem paying more if they’re driving around in Monaco.

It's also worth sparing a thought for small islands such as Wallis and Futuna and Barbados, who despite being small islands with low populations, are having to settle with only getting 7.69 litres and 8.12 litres of petrol per $15. It’s interesting to see that Haiti, which is in the same group of islands as Barbados, is towards the other end of the scale getting 18.18 litres of petrol and 22.80 of diesel. 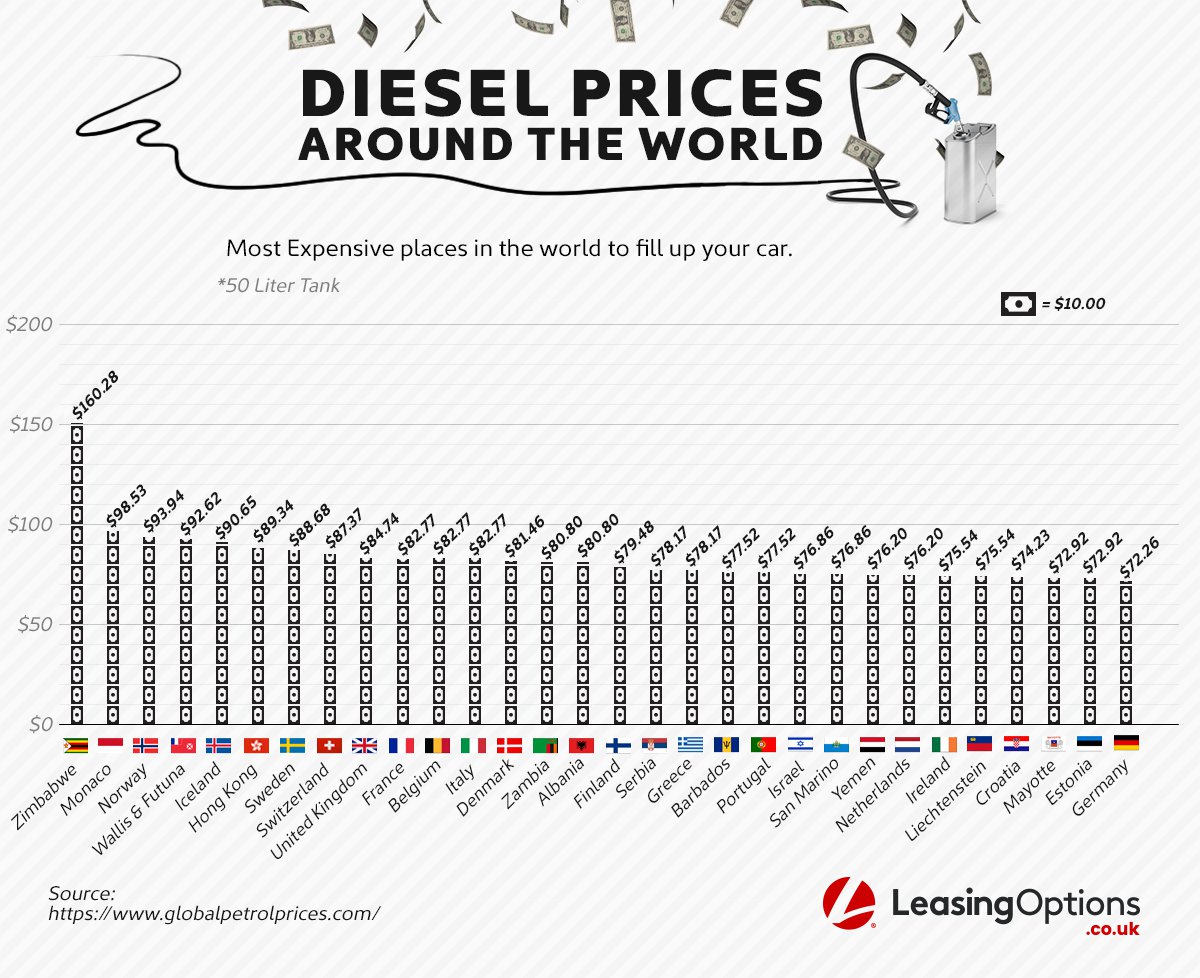 However, at the top of our table in first place when it comes to getting the most fuel for $15 worth, we find Venezuela who, due to an economic crisis, are miles ahead of the rest. In fact, you can reportedly receive 52.5 million litres of petrol for $15!

Here you’ll find the full list of how many litres people get for $15 worth around the world. See how your country compares to the rest of the world.