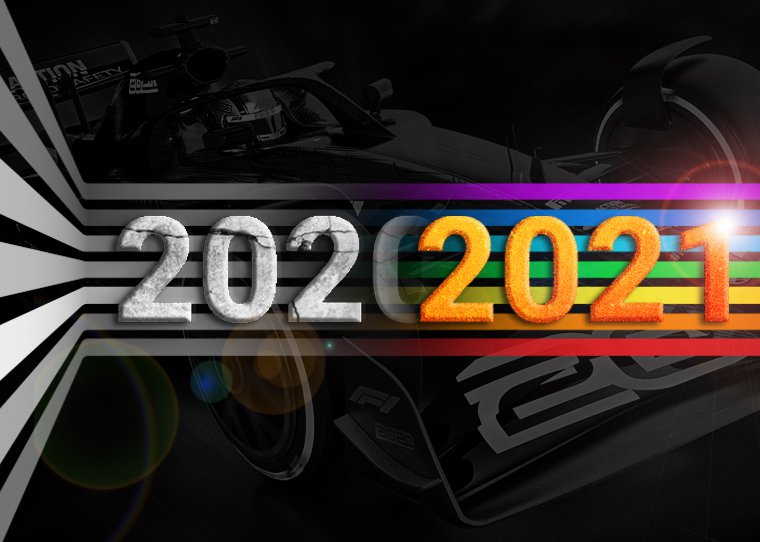 With all that went on in 2020 if you look hard enough you can see some positives. The new 2021 F1 season is just around the corner and at the time of writing, we're seeing a steady stream of new cars and drivers for this year.

When you compare 2020 to the somewhat rejigged 2021 calendar, it's like the seasons are decades apart rather than consecutive seasons. 2020 was a very European affair, reminiscent of F1 from yesteryear, not the globe-trotting spectacle its became of late.

In terms of circuits visited in 2020, what looked bleak this time last year, turned out to be pretty cool with some historic, undulating, twisting and turning; proper race-tracks returned and we saw some unique one-offs at tracks that we may never see an F1 car circulate again in race trim.

Cars returned to Imola for the first time in 14 years, much to the old school's delight, with Kimi Räikkönen still in the field. When Kimi last raced at Imola (San Marino Grand Prix), Lando Norris was just seven years old! You could see the fear in the eyes of the young pups on the grid as to what this daunting circuit would hold, with Lewis Hamilton comfortably taking the win amidst safety car and puncture chaos. Lando finished 8th and Kimi 9th. 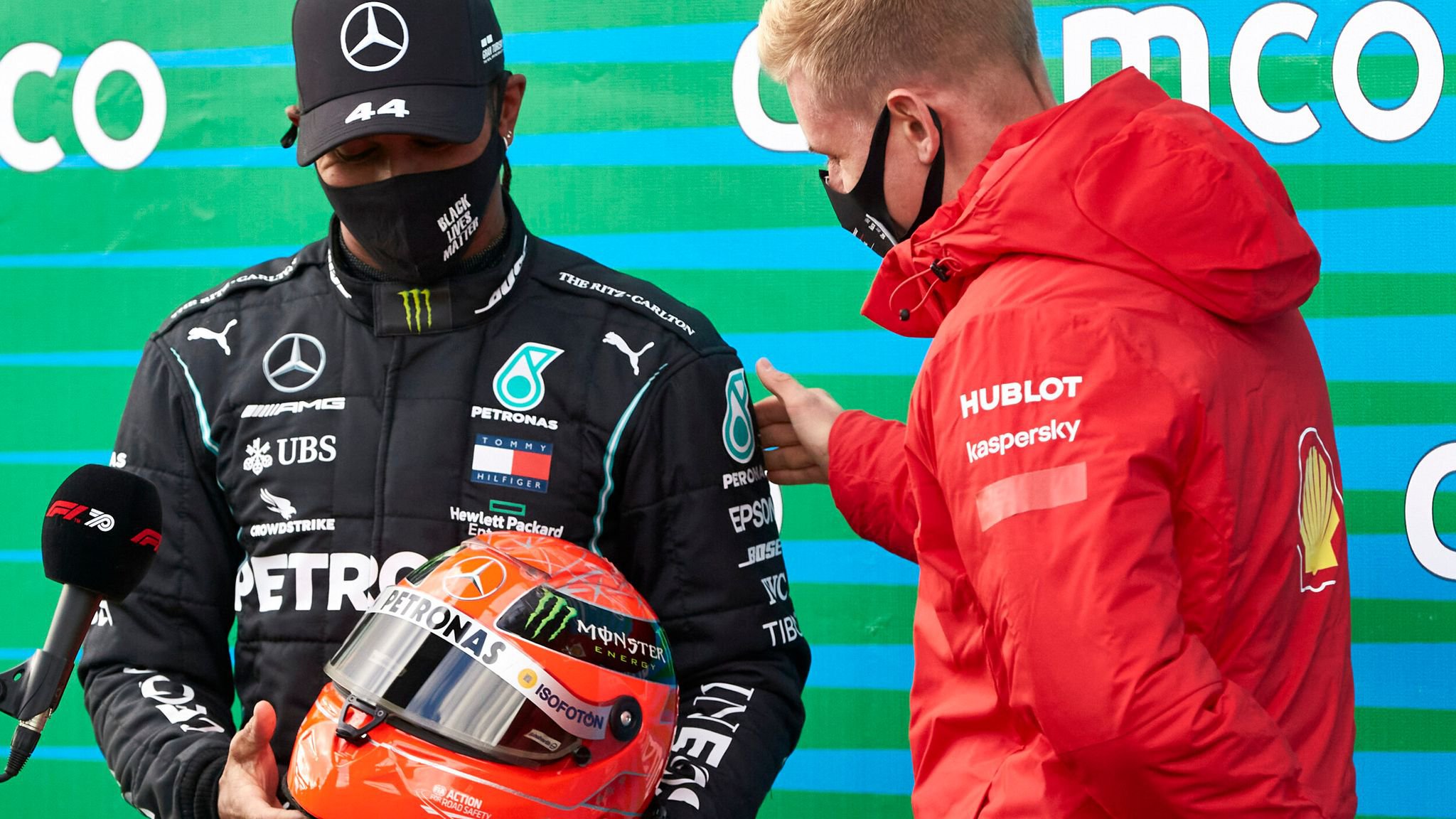 After a seven-year break from the calendar, F1 returned to the Nurburgring - GP Track, not the 12-mile-long green hell Nordschleife... boy, would we love to see an F1 car tackling the most famous and dangerous track in the world! Lewis won the race, equalling the career victories of Michael Schumacher. In post-race activities, Mick (Micheals son, ['Keep fighting Michael']) presented Lewis with one of his father's race-worn helmets from the 2012 season as a reward/gesture from the family for matching his father’s record. Fog in the early days of the race weekend hampered a test for Mick in the Alfa Romeo, but we'll see him on the grid in 2021 in a HAAS.

The Turkish Grand Prix, last seen in 2011, made a one-off appearance in 2020 and the track was as challenging as ever. Lewis again won the race, clinching the 2020 Drivers Championship and equalling Michael Schumacher's world title wins.

F1 returned to Portugal, after a 24-year hiatus from the country. The Portimão circuit has been popular in previous years for pre-season testing, appearing in the World Endurance Championship, the Moto GP calendar, and Top Gear. It has always been on the cusp of joining the calendar, since 2009.

This newly designed circuit, completed in 2008, has an old-school feel reminiscent of the Nürburgring and Spa, which the drivers love. The race was won by none other than Lewis Hamilton, giving him the record for the most Formula One Grand Prix wins. The success of the racing running left it a contender for a 2021 calendar spot, which has come to fruition taking the place of the Chilian Grand Prix, as Round 3 of the 2021 season.

This track is owned by Scuderia Ferrari and is its test track. F1 cars have tested here before in 2012 and the drivers loved its uniqueness, fast corners and undulations. Competitive racing has been held at the track in the form of DTM and Moto GP previously. The race coincided with Ferrari's 1,000th race, the team wore historically styled overalls, and the car was painted a deep burgundy instead of the iconic Scuderia Ferrari - Rosso Corsa. 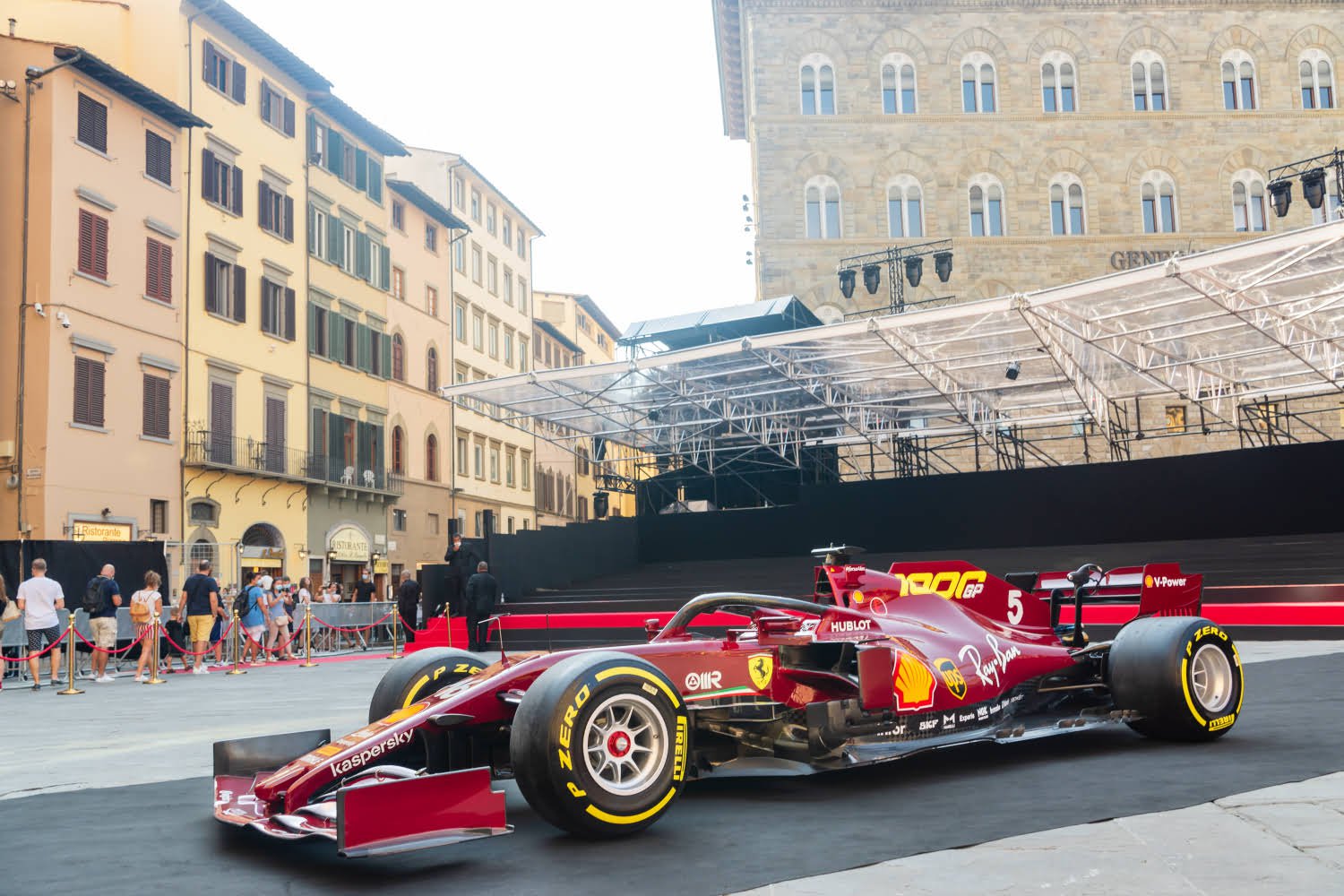 What a race, Mugello provided a race full of safety cars, red flags and close wheel-to-wheel racing, with some ballsy overtakes. The race may have been marred by the lap 6 safety car restart accordion effect, four-car collision and subsequent red flag; but that aside the racing was different, as this track hasn't been designed or tweaked by Tilke Engineering, the independent design team who've overseen most of the changes to the iconic tracks over the years or blank-canvas designs of the newer circuits. Lewis won the race, but the standout drive was Alex Albon, gaining his first career podium.

We've covered the new tracks and their iconic races, but what else happened in 2020? Well, Covid struck, with drivers testing positive and having replacements brought in, Racing Point needed a 'hülkatitute' when Sergio Pérez needed to isolate for both the Silverstone-based Grand Prix, this brought Nico Hülkenberg back to the grid after being dropped by Renault in 2019 for 2020, returning to his previous team, Racing Point/Force India. The car suffered electrical failure after showing promising pace in free practice and qualifying; Nico didn't make the start.

A week later, celebrating 70 years of the formation of the World Championship, a second race was held a Silverstone and Nico qualified 3rd behind Hamilton and Bottas, finally finishing the race 7th, Max Verstappen winning, ahead of Hamilton and Bottas who came in 2nd and 3rd respectively. 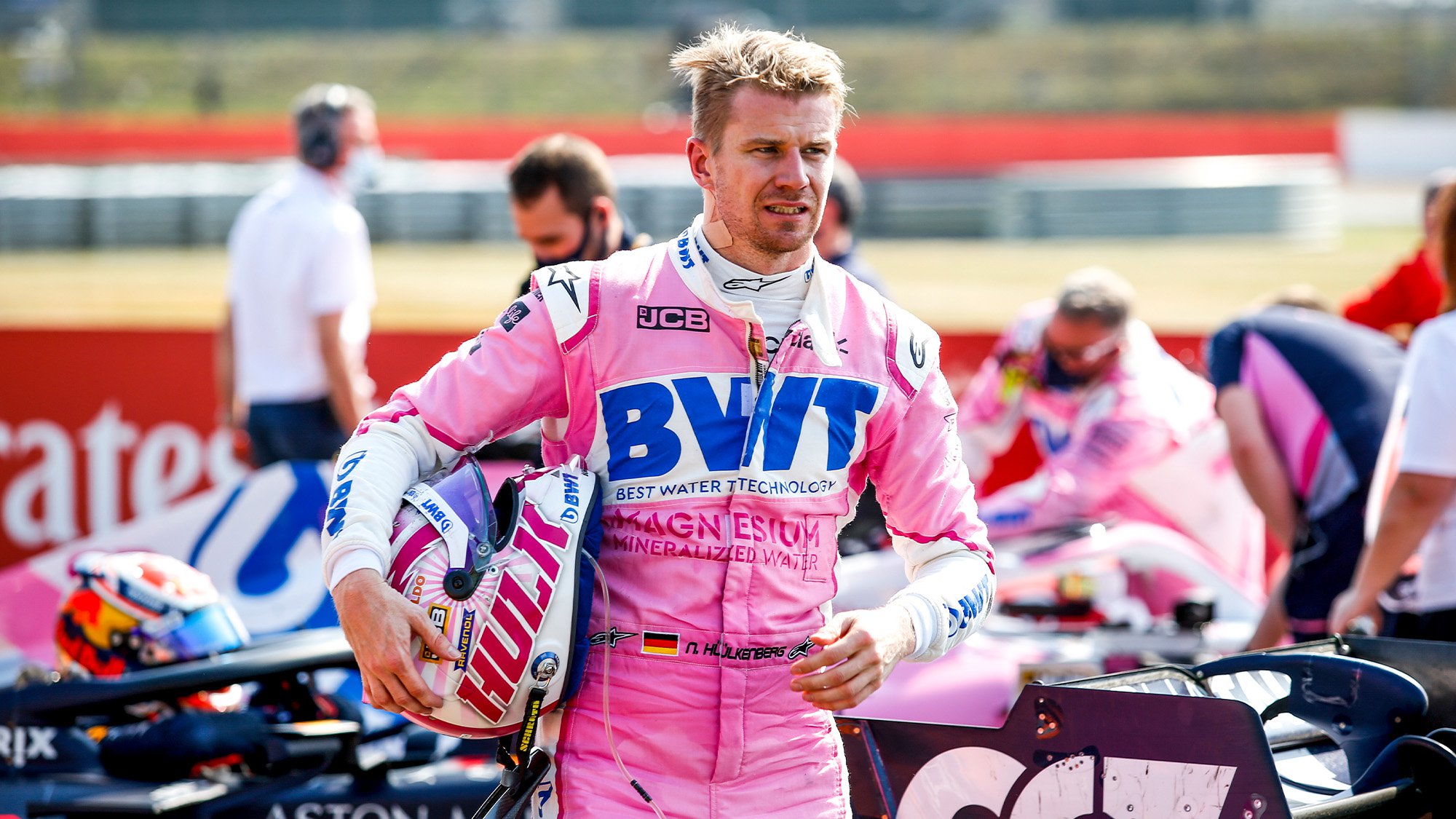 Nico would make a third appearance, as a full-on last-minute substitute for the Eifel Grand Prix (Nürburgring), when Lance Stroll felt unwell after the 3rd practice, later testing positive for coronavirus.

Other than circuits used, another big talking point of 2020 is the future of George Russell, the British Williams driver, who stepped up to drive Lewis Hamilton's car at the Sakhir Grand Prix held in Bahrain, when Lewis also tested positive for coronavirus having to isolate and miss the race. 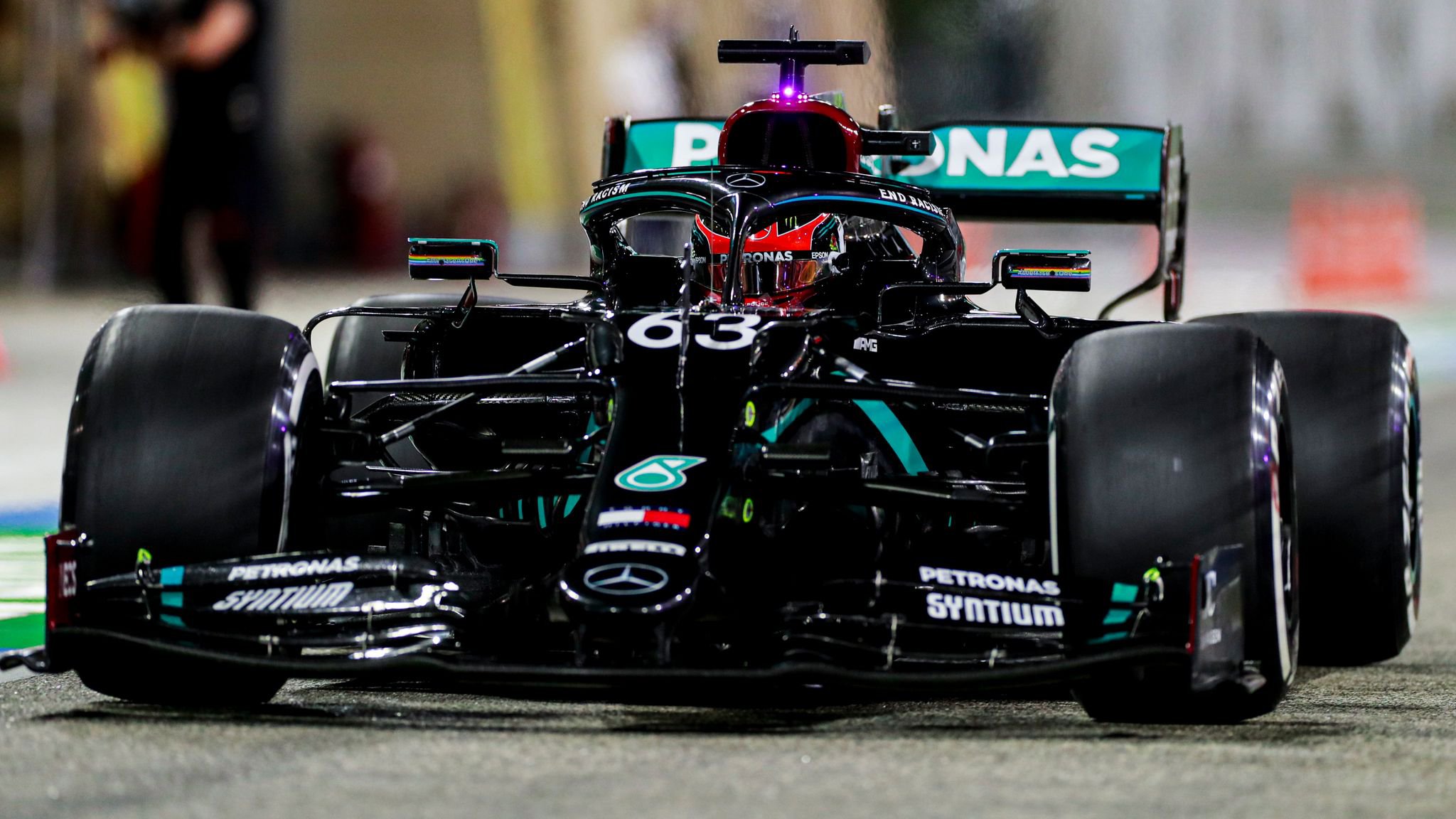 The car was set up for Lewis and slightly too small for George, but this didn't stop him qualifying 2nd behind Bottas and on race day getting the jump on Bottas, taking the lead of the race. Safety cars, incidents and a puncture stole the victory from George, whilst putting him on the radar of a lot of people who now know how capable he is. George's week in a Mercedes allowed another promising driver, Jack Atkin, a drive in his Williams.

After being unceremoniously dropped from Racing Point for 2021 (who'll be rebranded as Aston Martin), and replaced by the somewhat out-of-form Ferrari driver Sebastian Vettel, Sergio Pérez had a point to prove and did so at the Sakhir Grand Prix, holding off Russell to take the win. We'll see Sergio Pérez in 2021 racing a Red Bull, replacing Alex Albon and partnering with Max Verstappen which is bound to be a fiery pairing.

As the 2020 season drew to a close, Lewis Hamilton was the World Champion for the 7th time - equalling Michael Schumacher's achievements and Mercedes Benz were the Constructors Champions. 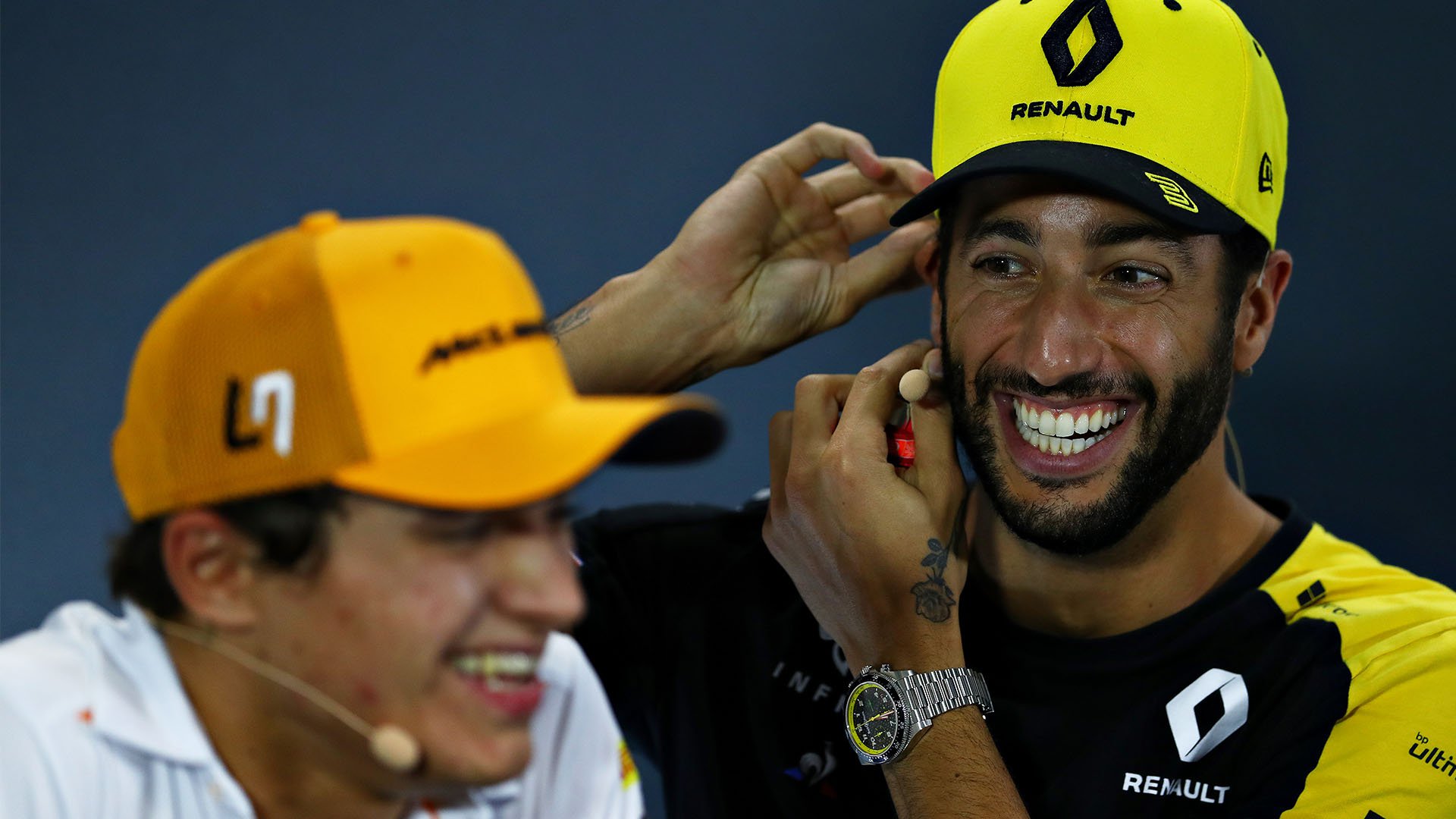 Carlos Sainz Jr will replace Vettel at Ferrari and joining Lando Norris at McLaren is a new engine supplier of Mercedes. Driving alongside Lando will be Daniel Ricciardo, who leaves Renault which will also rebrand to Alpine-Renault, with the drivers Esteban Ocon and double world champion Fernando Alonso. Other driver news, as mentioned, sees Mick Schumacher join Haas, with Nikita Mazepin both in their rookie F1 years, and Yuki Tsunoda joins AlphaTauri, replacing Daniil Kvyat and partnering with a blooming Pierre Gasly who's enjoying a second wind after his maiden win at the 2020 Italian Grand Prix.

It's already proving to be an exciting season, before the first wheels are turned in pre-season testing.