For many of us, dads were our free taxi drivers throughout our teenage years – there to pick us up at any place, any time. But you might be surprised to learn that, once you become a driver yourself, you’re not likely to be able to return the favour.

Here at Leasing Options, we asked both mums and dads what they really thought of their child’s driving and found out how far parents were willing to go to control their kids.

- Almost 1 in 5 dads say their child’s driving is dangerous.

- Dads are 50% more likely to want their kid to sign a written driving contract.

- More dads than mums would force strict driving rules on their child.

- Nearly 75% of mums believe their child’s driving is good or safe.

Nearly 20% of dads think their child’s driving is dangerous, yet almost 75% of mums think their kid is trustworthy behind the wheel.

Almost 1 in 5 dads almost certainly wouldn’t want to be a passenger in their child’s car, after describing their kid’s driving as either ‘worrying,’ ‘risky’ or even ‘terrifying’. But merciful mums are much more likely to accept a lift from their child, with nearly three quarters saying their son or daughter is a ‘good’ or ‘always safe’ driver. 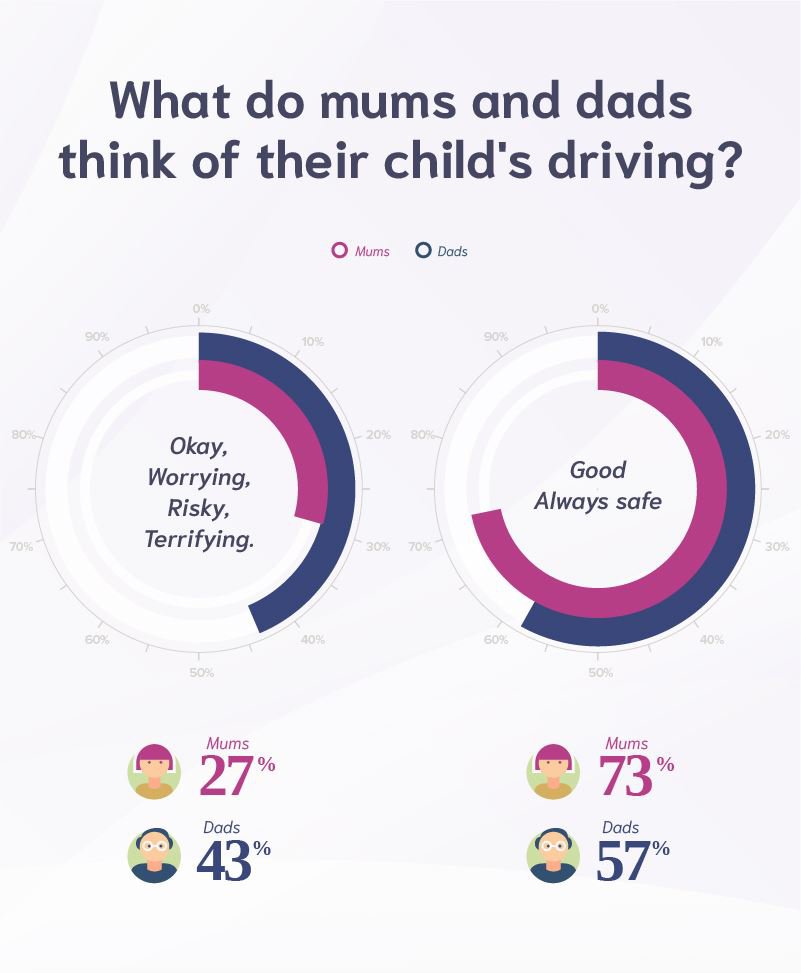 And because dads think their kids are dangerous behind the wheel, it’s unsurprising that fathers also believe they’re the superior drivers, too.

Almost 9 out of 10 dads think they’re a better driver than their kids.

When it comes to driving, it seems that dads believe they’re the real experts, with nearly 90% agreeing that they’re better than their kids. But luckily, you can always count on your mum to have your back. When asked to measure their motor skills against their kids, mums were almost a third less likely than dads to think they’re the best in the driver’s seat. 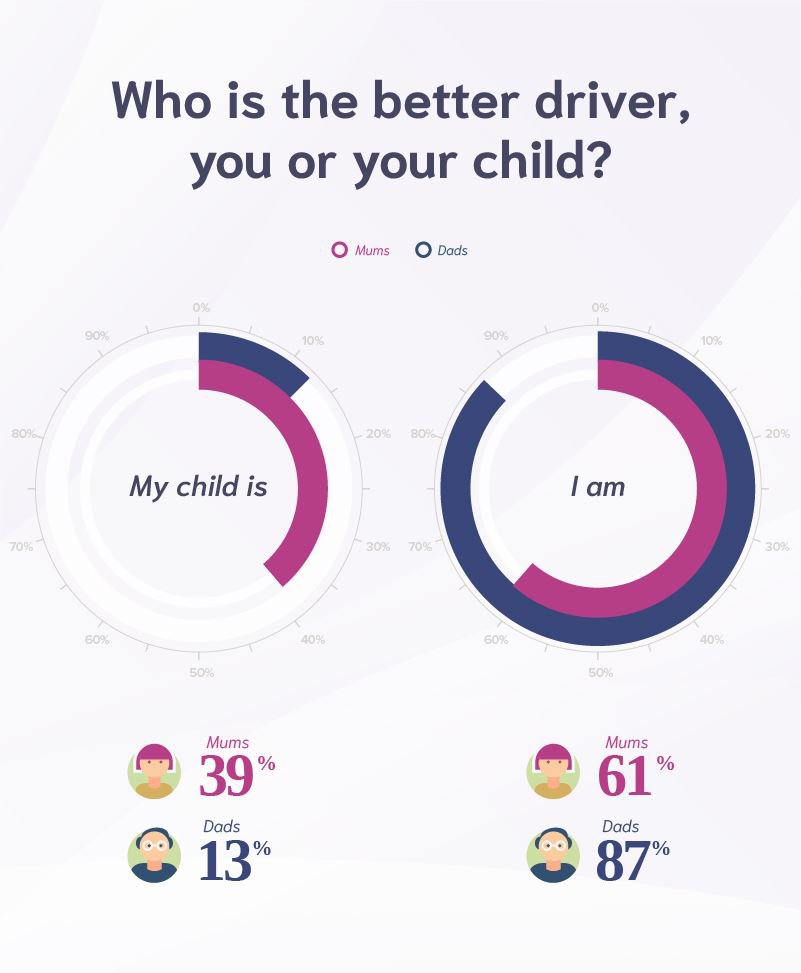 But it goes further than that, with even more dads thinking their child is a hazard on the roads.

Most drivers are guilty of making the occasional mistake, like forgetting to indicate or accidentally joining the bus lane. But dads are convinced their kids go way beyond the average driving blunder, with 1 in 5 saying their child is an unsafe driver, which doesn’t look good for kids on the road. Fortunately, mums are much more forgiving when rating their child’s driving – when compared to dads, mums are 50% less likely to say their child is an unsafe driver. 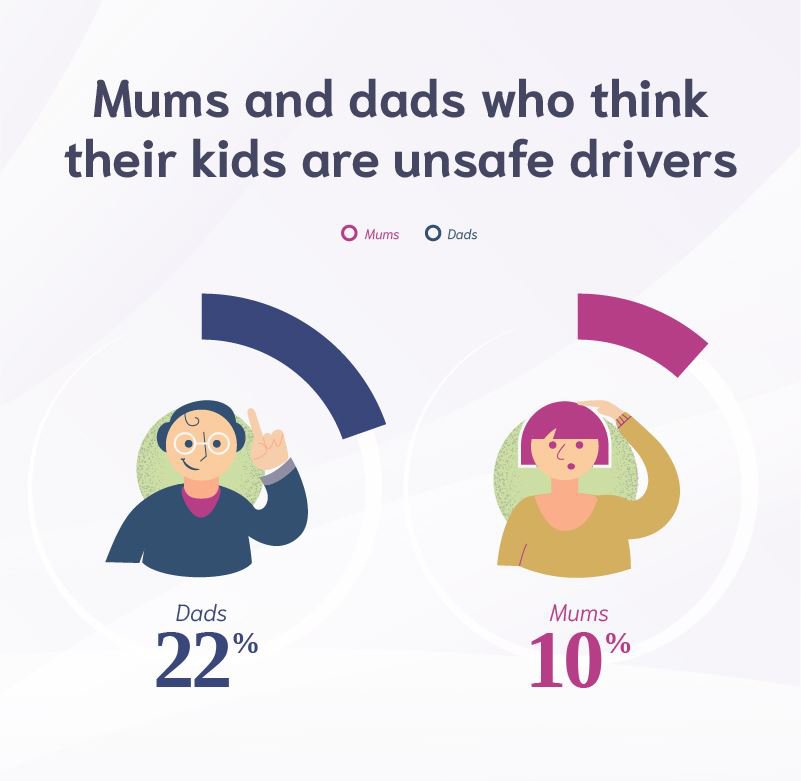 That’s why it’s also no surprise dads want youngsters off the road altogether. When parents were asked if they would change the legal age limit for driving to 19 or above, more dads said yes to putting the brakes on teens passing their test. But since the law’s probably not going to change any time soon, dads have taken matters into their own hands by studying their child’s driving using an app.

50% more dads use an app to spy on their kid’s driving speed.

There’s a lot of speculation out there that technology is secretly watching us, and now it seems like it truly is – for parents and kids, at least. Taking things to a whole new level, dads are almost 25% more likely to keep an eye on their kids by scrutinising their driving via a tracking app, over mums. They seem particularly keen to spy on speed, as dads are 50% more likely than mums to use an app to monitor how fast their child is driving.

Ironically, the DVLA recently revealed that men were involved in almost 80% of recorded motorway speeding offences last year, which might make dads question if they’re really the right person to be stalking their child at the wheel. Or it could just be a case of ‘do as I say, not as I do.’ 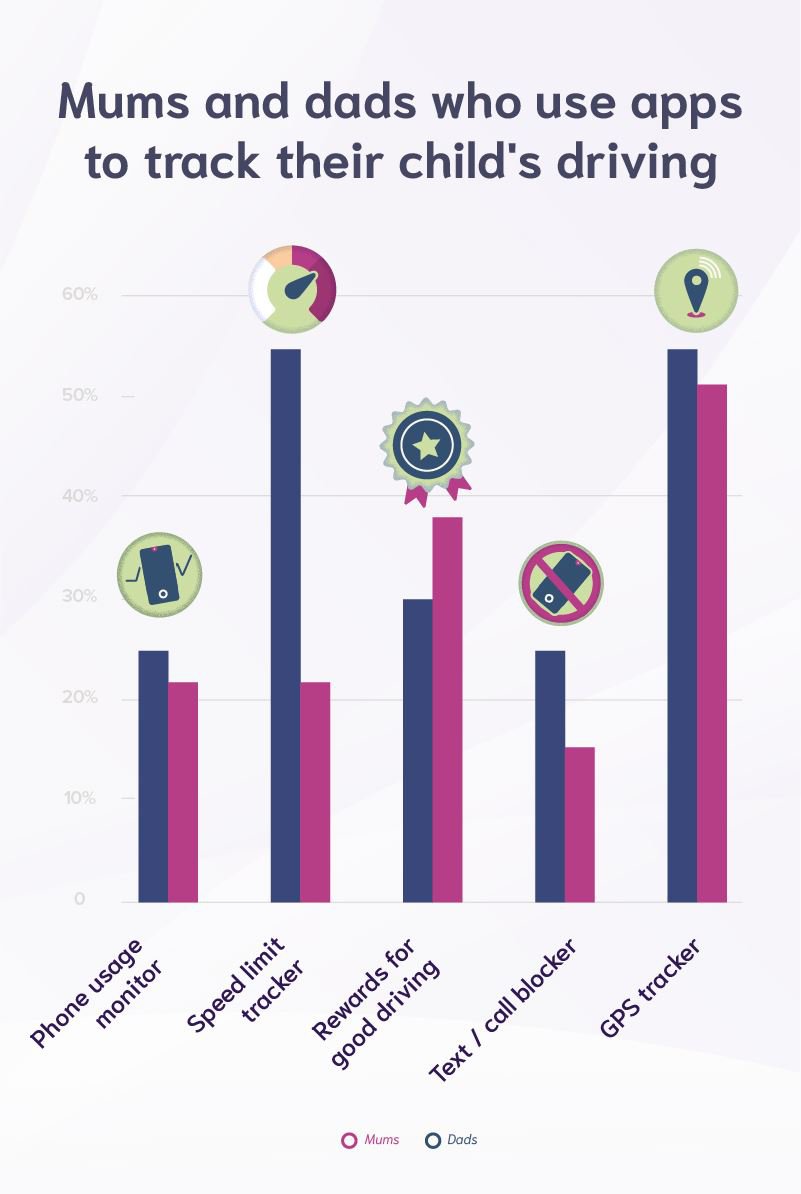 Luckily, not all motoring apps are used to catch kids out. Other apps do the opposite by rewarding good driving behaviour, giving you virtual points and prizes for adhering to The Highway Code. Unsurprisingly, it’s mums who are more likely to use these.

But before kids can get out into the road and reap their good driving rewards, some must agree to the stringent rules set by dads.

Dads are more likely to impose harsh driving rules on their kids.

When parents were asked if they have any kind of driving agreement with their child, our findings show that it’s dads again who demand control. More than half of dads wouldn’t let their child eat or drink at the wheel, which is unfortunate for fast food lovers who regularly hit the drive-through. Road trips are out for kids, too, after nearly a quarter of dads have banned their child from driving on extended journeys.

If kids were thinking about taking a long driving trip, they’re better off asking mum for permission. Overall, we found mums are 20% less likely to insist on a driving agreement with their child. 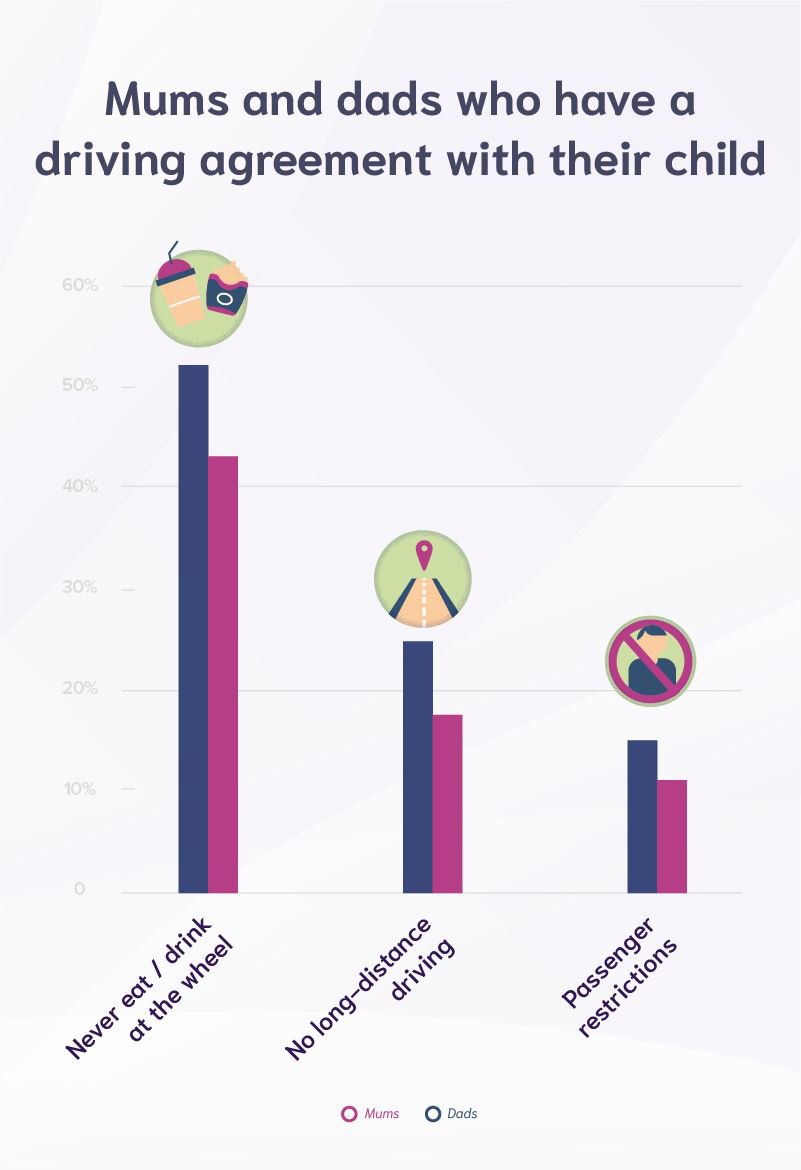 As you might expect, these driving agreements are usually just a verbal pact. But some parents have taken things to the extremes and, unbelievably, want it in writing with a formal family contract.

It’s my way or the highway: dads are 50% more likely to want a written driving contract.

Simply passing your test and promising to be a good driver isn’t good enough – some parents even want their kid’s signature before letting them out onto the roads. What’s more, when compared to mums, dads are 50% more likely to think a written driving contract is necessary – or already have one in place.

So, when it comes to their kids driving, it seems mums are more willing to take a back seat – and if you are guilty of cutting corners in the car, don’t let dad find out, although, he may already know.

“My dad acts like a built-in sat nav when we’re only going to the supermarket” – real-life stories from kids with controlling parents.

We asked motorists for their real-life stories about sharing a car with their parents, and as you might expect, dads are the ones who are driving their kids crazy.

“My dad always says I drive like an absolute lunatic, which is ironic considering the way he drives his own car – always trying to race others, then when he hits a red light, he slams his brakes on so hard it feels like you’re going to go through the windscreen. He also acts like a built-in sat nav when we’re only going to the local supermarket.

Dad’s really fussy if I cause any damage to my car, even the tiniest of scratches. One time, I accidentally scraped my car against a wall. My poor mum had to bail me out and quickly pay for it to be fixed before my dad saw, because I knew he’d hit the roof!”

“When I passed my test, my dad promised to give me a cash reward if I could stick to his driving rules for six months. He ended up becoming the human black box, telling me where I was allowed to drive, which friends I could give lifts to, and he completely banned me from driving at night. I felt like I had to respect his rules because he helped me buy the car, but in the end, I couldn’t stick to his agreement. I never got that cash reward.”