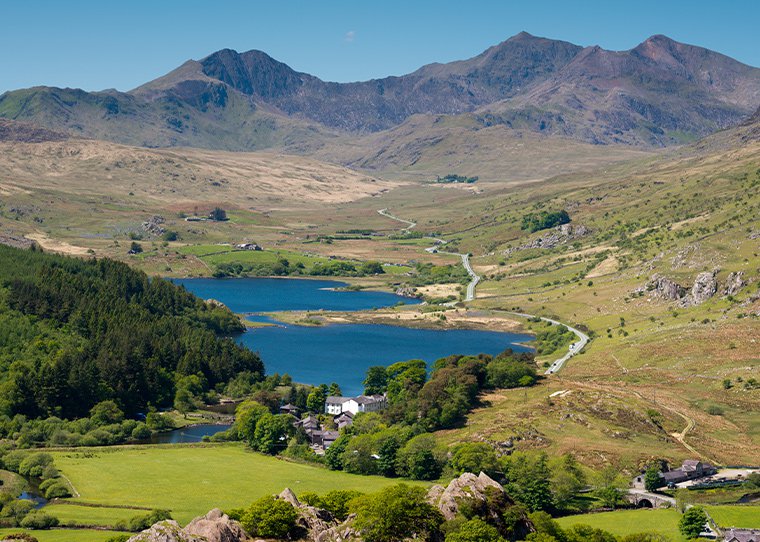 Wales is lucky enough to be home to some of the most scenic drives in Britain, making the journey just as exhilarating as arriving at your destination.

Soaring mountains and sweeping views on these Welsh driving routes will really take you away from it all as you hit the open road.

Here’s a small selection of the best driving roads in Wales, with stunning scenery around every corner. Which of our fab four is on your bucket list of drives? More affectionately known as ‘the Top Gear road’ after Jeremy Clarkson was filmed driving along it, this swooping mountain pass is as close as it gets to a rollercoaster ride on the road.

We recommend tackling this one from Gwaun-cae-Gurwen in the south – you’ll cut across the western corner of the Brecon Beacons to peak at 1,600ft before dropping down to Llandovery for the finish.

Keep your eyes peeled for the hairpin known locally as Tro Gwcw, or ‘cuckoo turn’ – take your time and drop down the gears – as well as the magnificent views of the Tywi Valley.

You’ll also need to be prepared for the fact that along many of the steepest sections of this Welsh driving road, there are no guard rails to protect the unwary. As we’ve already said, take your time! It’s very rarely busy along this route and there’s no need to put pedal to the metal.

Your drive might get interrupted by some of Wales’ local four-legged residents, as sheep are known for treading onto the tarmac in places after a long day of clinging to rocky outcrops. Approach slowly and calmly and they will soon trot away.

Snowdonia – A Lap of Snowdon There’s no denying that Snowdonia is something special, and you’d be mad to miss it off your bucket list of the best driving roads in Wales.

Snowdonia National Park is undeniably popular with walkers all year round – thanks to Wales’ highest mountain of Snowdon nestled among the 823 square miles of diverse landscapes and unspoilt scenery – but there’s so much to discover from the driver’s seat too.

This route takes you right round the huge bulk of Snowdonia’s central ridge. You can take it on either way, but you’ll get the best views of Snowdon itself if you come at this from an anti-clockwise direction.

From Caernarfon in Gwynedd, take the A4085 which quickly rises up into the foothills. As you make it over the crest of the hill just past Rhyd-Ddu, look left up Snowdon’s western flanks to see the famous summit café.

You’ll now be on the A498 – take a left when you reach Beddgelert and be sure to look to your left again for more impressive glimpses of the summit, this time much more jagged and set among a truly awesome horseshoe of cliffs.

Turn left at Pen y Gwryd and this will take you up through the famous Llanberis Pass. Keep your eyes peeled for walkers at its highest point, Pen-y-Pass, as this marks the start of the most popular walking routes.

It’s downhill from here, taking you to Llanberis and then onward back to Caernarfon. Wales is known for its rugged mountainous landscape and this driving route takes you to the Cambrian Mountains, which undeniably form the spine of the country.

The most scenic of the driving routes can be found by heading out of Aberystwyth on the A4120 to Devil’s Bridge.

From here, follow the B4574 to Cwmystwyth before picking up the awe-inspiring mountain road that meanders through the mountains, past some of the beautiful Elan Valley reservoirs, before eventually dropping down into Rhayader.

Little bit of history for you – the Elan Valley reservoirs were the brainchild of the Victorians, and originally designed to supply water to the industrial English Midlands. These days, the estate is now a tranquil paradise for walkers and wildlife alike.

Get your camera ready for some brilliant scenery shots along the way and once you return to Aberystwyth, there’s plenty for visitors to do.

If you want an experience you’ll never forget, take the steam train journey up to Devil’s Bridge this time – it’s made up of three bridges, built on top of each other in a dizzying gorge. One for the thrillseekers! If you’re known for seeking out the sandy beaches when you head out on the road, the Pembrokeshire coast is home to some of Britain’s best, and you can discover them all with your very own Welsh road trip.

Taking the A4139 from Tenby, which in itself is an ever-popular and quintessentially British seaside resort, head west to the idyllic Barafundle Bay.

Leaving the car for a short walk from here will take you to Stackpole Nature Reserve – here you can catch the local otters at play, and it’s a sight to behold!

As you head further west along the coast, you’ll be met with the dilemma of which beach to watch the sunset from… we reckon the ribbon of sands at Freshwater is a decent option but you are really are spoilt for choice.

Heading north from Barafundle Bay using the A477 brings you to the coastline of Broad Haven and the stunning drive from here towards the golden Newgale Beach via Welsh Road.

To finish off your beach hopping trip for the day, the jewel in the crown is carrying on to St Davids, the UK’s smallest city and home to some impressive historic buildings.