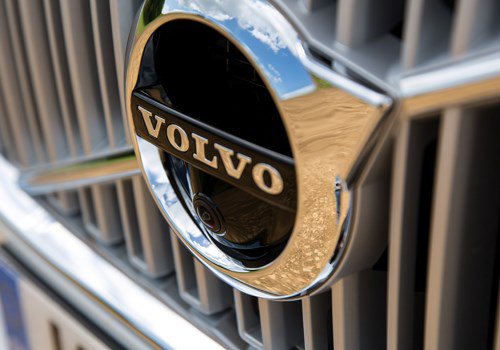 Twelve years is quite a long time. In the automotive world, it’s a veritable aeon.

The original XC90 was such an overwhelming success that the Swedes kept it in production for 12 years. It first saw the light of day in 2002 during the era of Ford-ownership and was made in Sweden until 2014, at which point all of its tooling was dispatched to China where it continues to be manufactured and sold as the ‘XC Classic’.

Under new ownership of Chinese conglomerate Geely, production of the second generation XC90 for global markets commenced in late 2014, with the first cars eventually reaching UK shores in late 2015.

The new XC90 is longer, wider and lower than its predecessor and was designed under the stewardship of Volvo’s chief of design Thomas Ingenlath, with the interior largely the outstanding work of Brit Robin Page, previously head of interior design at Bentley. The new XC90 certainly looks the part of a premium two-box SUV, with quietly assertive styling that promises to stand the test of time – which it might need to, given the model’s heritage. Outside and in, it is Scandinavian design writ large…modern yet devoid of gimmickry and luxurious in its simplicity.

Clean lines and uncluttered panels give way to ‘Thor’s Hammer’ LED headlights at the front and the tall, scythe-like rear light clusters reach up to the roofline. Dual chrome exhausts afford the rear a hint of sportiness and I particularly like the way the wing mirrors are set quite far back on the doors to give better forward vision. Smart 19in alloy wheels are standard across the range. With its spartan design aesthetic and high-quality materials, the Volvo XC90’s cabin is undeniably handsome and is the car’s USP. Its matte-finish wood, genuine metal and even real carbon-fibre accents are pleasing to both the eye and the touch and its controls are generally laid out in a logical and uncluttered manner. The nine-inch central touchscreen is set vertically rather than horizontally, which Volvo says allows for superior map viewing and menu structures. 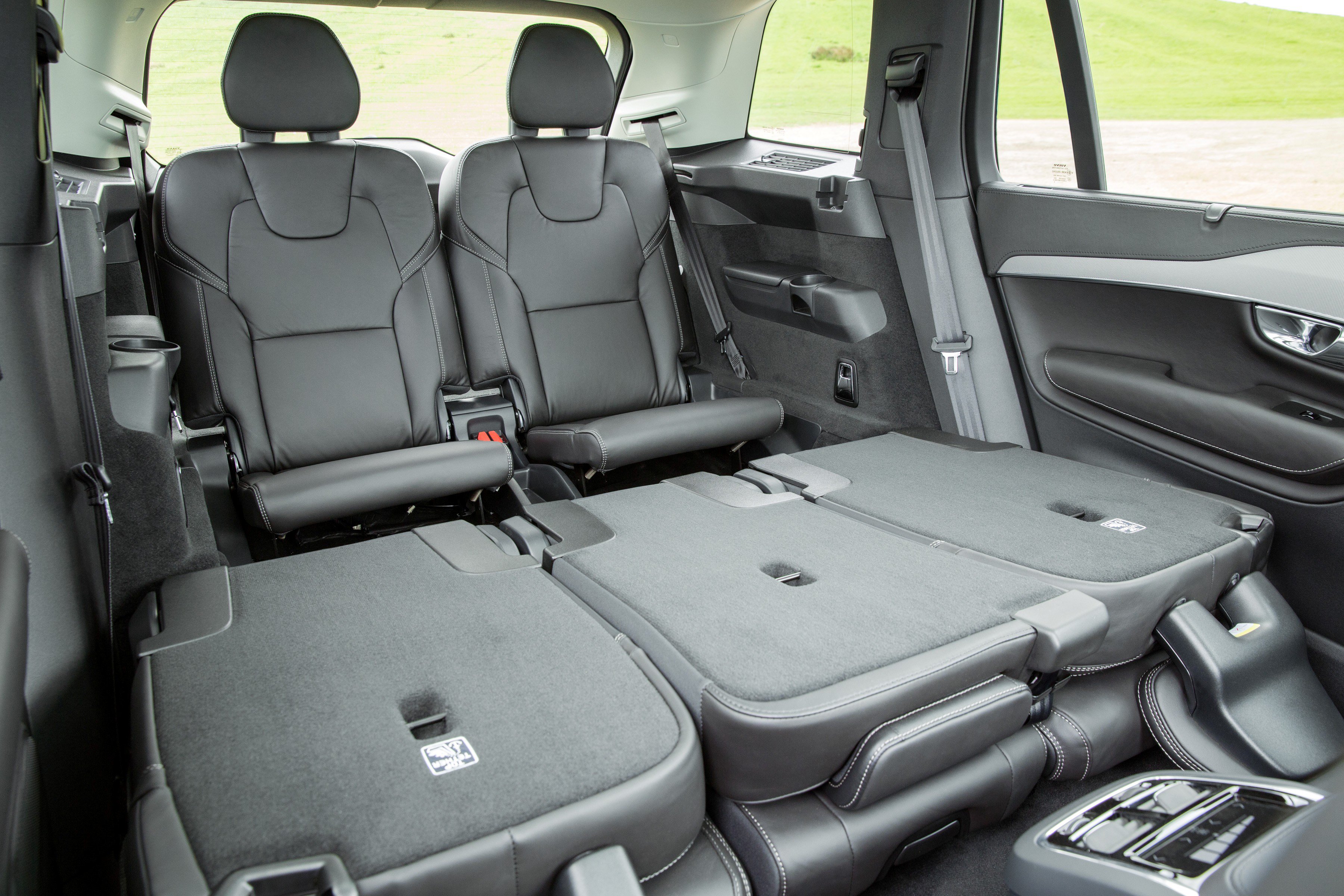 All XC90 models are swathed in leather throughout. Both front seats are comfortable and spacious and provide exceptional long-haul comfort. Second-row passengers are treated comparatively well and enjoy a good amount of legroom. As with most large seven-seat SUVs, the third-row furniture is best left to teens and children, all of whom will have their eyes down to their phones anyway so won’t know any better.

The XC90’s cargo capacity is generous. With all the seats up, there's still a hatch-back bashing 450 litres of space available behind the third row. For everyday use with the third row folded, boot space increases to 1,102 litres. For those more copious skip-run clear-outs, flattening the second and third row reveals a cavernous 1,902 litres. However, a lack of front parking sensors as standard on such a large and expensive SUV is incomprehensible. Adaptive dampers, a premium sound system and active cruise control are all on the options list. There are no manual gearboxes available in the range of MkII XC90’s. All models now have an eight-speed high-tech Aisin auto’box that means there’s a perfect gear for all road speeds.

On the diesel front, Volvo has stuck to its guns with a twin-turbocharged four-cylinder unit in two states of tune instead of the usual V6 or V8 expected of an SUV this size. The line-up comprises D4 FWD, D4 AWD and the D5 AWD - as tested - which produces 235bhp and 480Nm of torque from a lowly 1,750-2,250 rev band.

Of course, performance improvements are most welcome, but it’s the fuel economy that will matter to most and big strides have been made in this department as, while the old model claimed 34.3mpg, this new car nudges 50mpg and with CO2 emissions of 149g/km. During the test week with the D5 AWD, I spent over 16 hours at the wheel, covered 412 on- and off-road miles and, at an average speed of 31mph, real-world fuel economy of 41.8mpg was achieved.

There are no front-wheel-drive petrol XC90’s and Volvo’s ‘T’-range of petrol engines comprises the turbocharged T4, turbocharged and supercharged T5 and T8 all-wheel-drives, in two states of tune. Again, all are fitted with the eight-cog Aisin automatic gearbox. 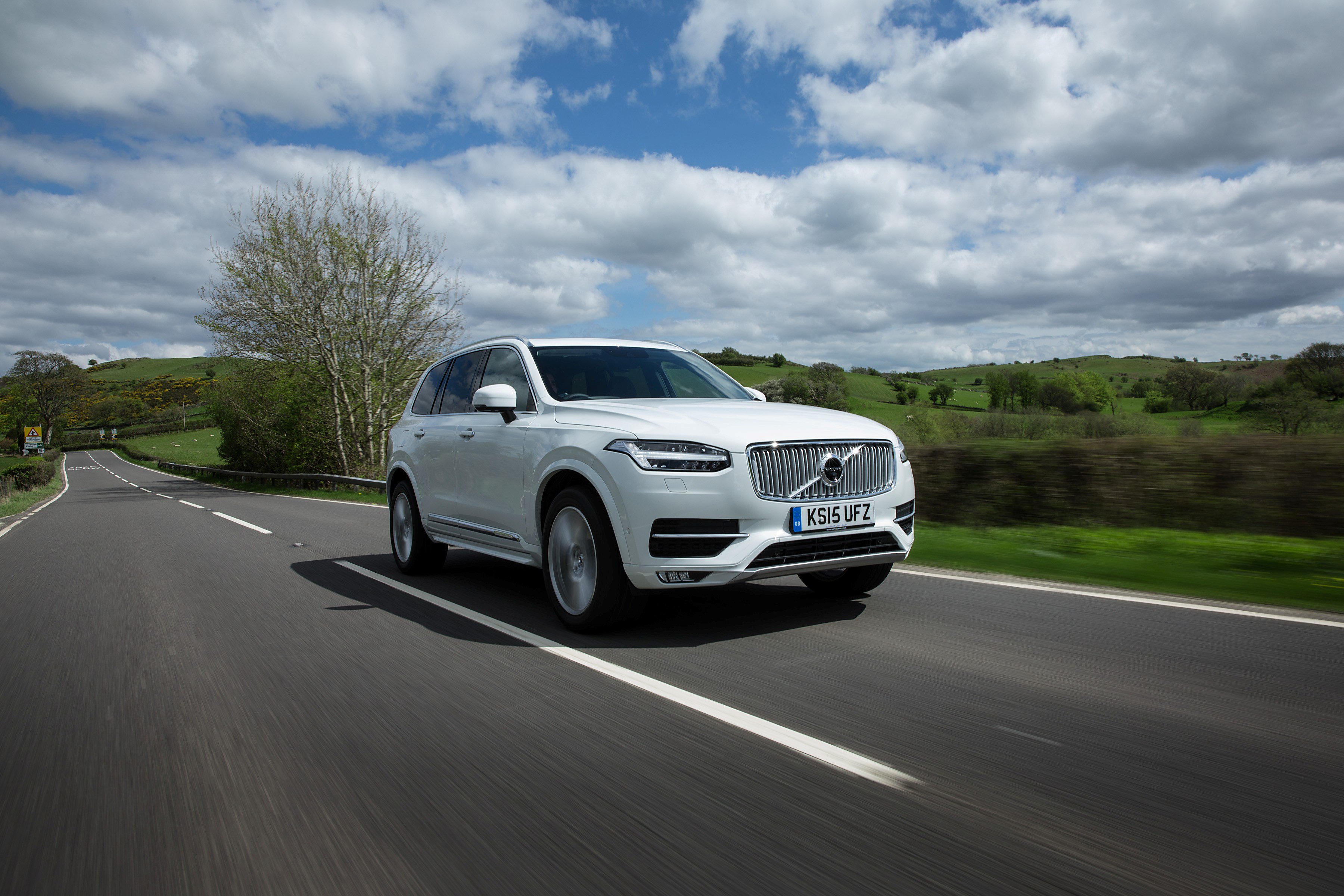 Being the nature of the beast, the XC90 is more luxury SUV than rugged mud-plugger. Its road-biased set-up translates to a comfortable ride with plenty of grip. For a smoother ride and if your vanity will permit, avoid the 21-inch wheels as they compromise the ride quality.

If you’re like me and enjoy meandering through the twisty bits with a measured dollop of enthusiasm, be prepared for a fair amount of body roll in the XC90. The steering errs heavily on the side of lightness rather than any degree of sportiness and has a sense of clinical detachment from the road, which I found quite unnerving and never quite got used to during the week. Unlike many of its seven-seat rivals, the XC90 has window airbags that protect those in all three rows of seats, not just the first two. Plus, it comes with the latest version of Volvo’s City Safety system, which can automatically apply the brakes if the car in front comes to a sudden stop, or if a pedestrian steps out in front of the car.

Active anti-whiplash head restraints and a lane departure warning system are also standard on every model, while the options list includes blind spot monitoring and a system that prevents you pulling out into the path of another car at junctions. The Volvo XC90 feels incredibly Swedish, in the best possible sense. Classy, restrained and wearing an air of uniqueness like a halo, the Volvo XC90 is a revolution in the world of three-row luxury SUVs. It dismissively yet eloquently answers any misgivings felt about Volvo in its post-Ford, Chinese-funded era; it’s expensive, fast, stylish, safe and discreet, with strong attention to detail and a beautiful finish.

Okay, perhaps not so discreet.

Volvo XC40 Review: Up where the thicker cream floats

Volvo complete their SUV line up with the desirable new XC40

The first images and details have been released of Volvo's new premium...