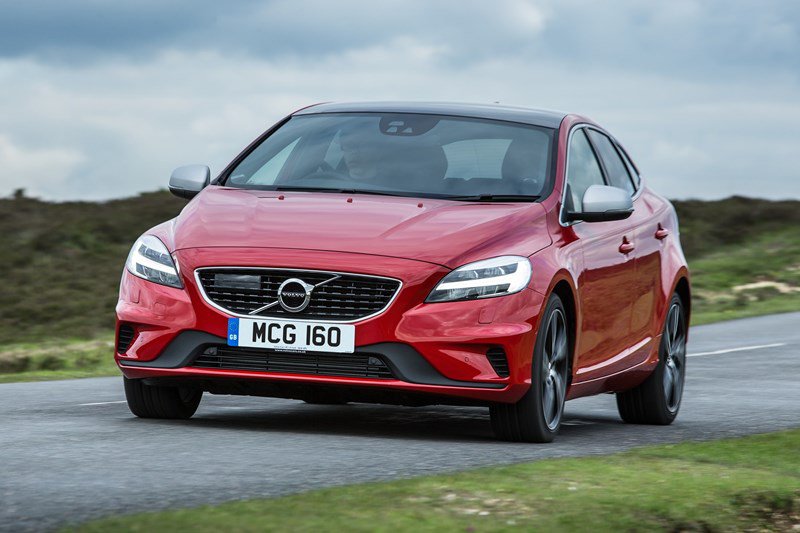 The international auto industry is littered with failed marriages, but the stars aligned perfectly for China’s Geely Holdings and Swedish automaker back in 2010.

Thanks to the huge $11 billion investment made by parent Geely in the years that followed, Volvo commenced its global new product offensive in 2016 with the much-anticipated V90 SUV. Since then, no less than five additional new models have been introduced with yet more set to arrive during 2019-20. Even so, it’s truly remarkable to think that only three years ago, Volvo’s V40 hatchback – the replacement to the ageing but likeable C30 coupé – was the newest car in the model range. Well, now it’s the oldest.

Beneath the skin, the V40 still uses a platform that was a development of the Mk3 Ford Focus (Volvo began work on the V40 in 2010 while the company was still under Ford ownership). It may be ‘Made in Sweden’, but it’s built in Ghent, Belgium…less Andersson and more Poirot, if you like. 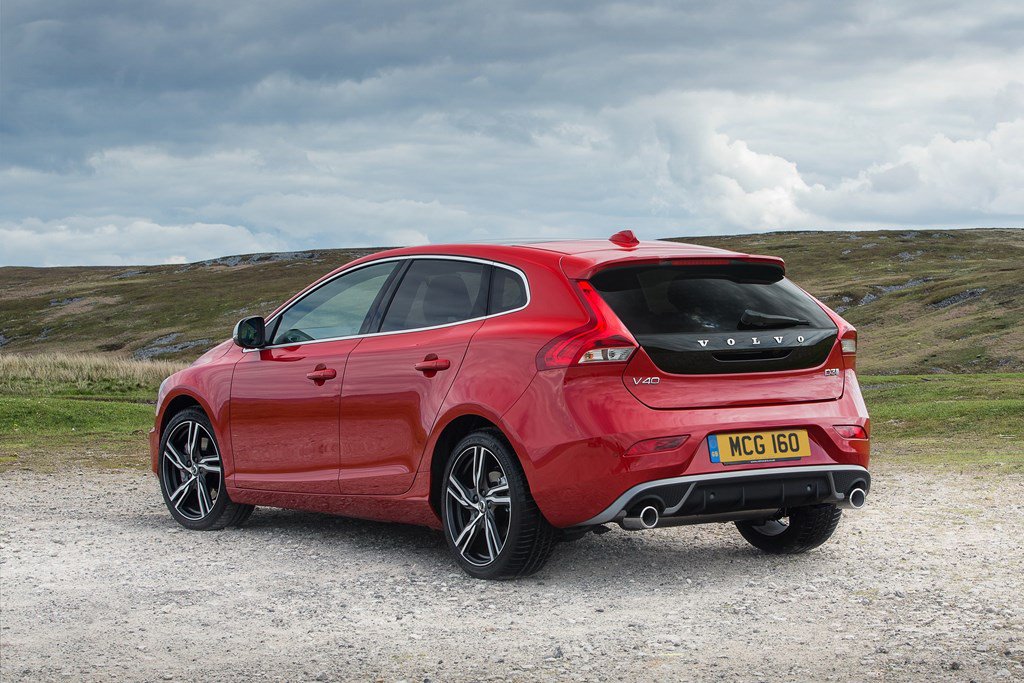 In 2016 the subtle design changes were largely cosmetic enhancements to the exterior which included the restyling of the front end with softer crease lines and new ‘Thor’s Hammer’ LED headlights that have trickled down from the range-topping XC90, V90 and S90. New alloy wheel options and five new exterior colours were introduced.

Inside the updated Volvo, you'll find some of the most comfy car seats available anywhere and a handsome dash that is now looking a little dated with its non-touch infotainment screen. However, the main, single-dial binnacle with its customisable TFT readout still looks quite modern as does the leather, multi-function steering wheel. It's a pity the handbrake lever is a little awkward to operate, being on the left side of the centre console – an obvious hangover in the conversion to right-hand-drive variants.

The floating centre console is still there with its multitude of buttons that, on the face of it looks overwhelming, but which is really rather simple to decipher. Indeed, there are many you will rarely, if at all, use. 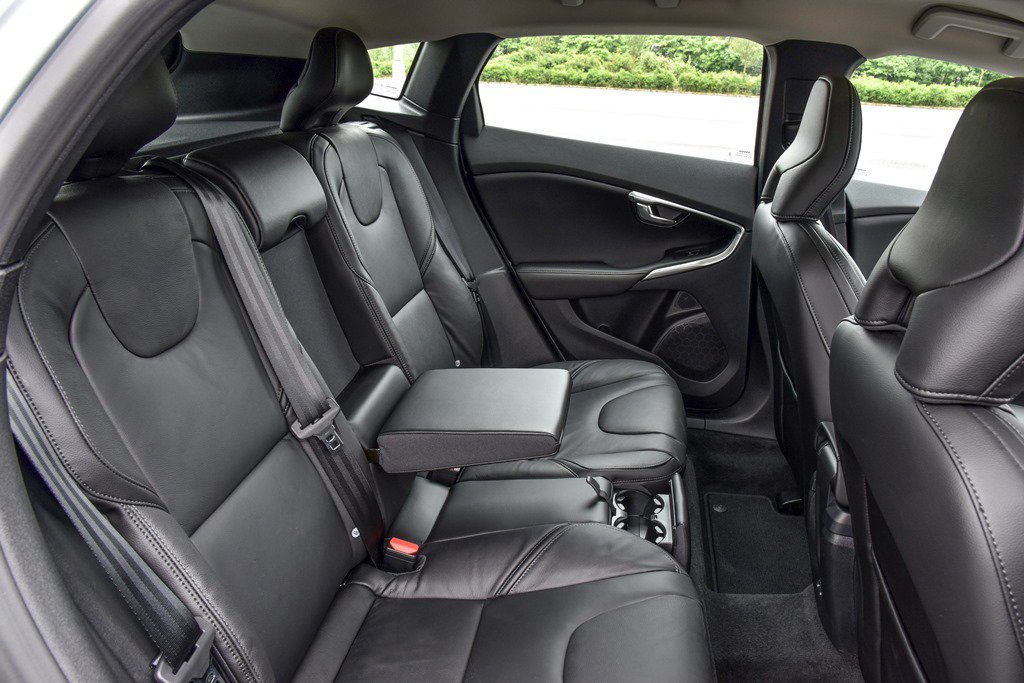 In the rear there is enough space for two adults – or three for short trips – and, despite the declining coupé-like roofline, headroom isn’t too bad if you’re less than six foot in height.

Boot space at 335 litres is under par for the class but comes with a clever and useful boot divider that is handy for those small top-up shops ensuring your groceries don’t rattle around in the boot. 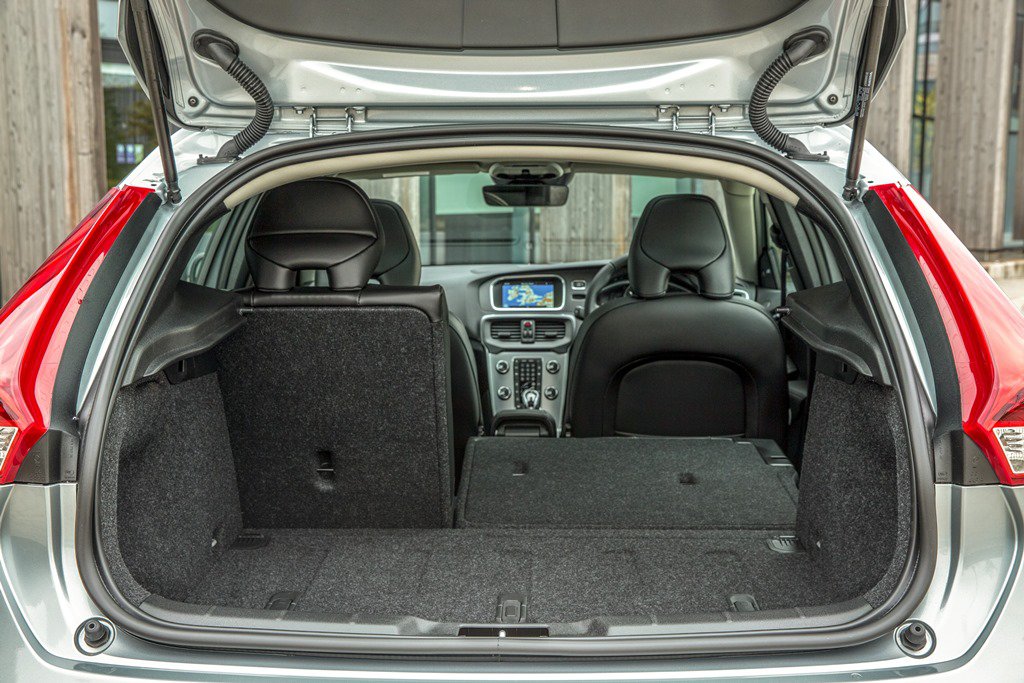 There are two four-cylinder turbocharged petrol engines available across the V40 range; the first (‘T2’) is a 1,5-litre power plant offering 122hp/220Nm, while the second (dubbed ‘T3’) is a 2.0-litre unit delivering 250hp/250Nm. It is available to order paired with either a six-cog manual or automatic ‘box.

Official fuel consumption on the combined cycles is stated at around 48mpg in manual guise, with the automatic achieving a further two or three mpg to that.

Volvo’s upgraded 2.0-litre turbodiesel engine for the V40 model are designated ‘D’ and are also available in two states of tune; D2-120hp/280Nm and D3-150hp/320Nm, with CO2 emissions of 122 and 121g/km, respectively. Six-speed manual or automatic gearboxes are available on both diesel variants and combined fuel consumption is listed as 64.1mpg (manual) or 62.8mpg (auto). 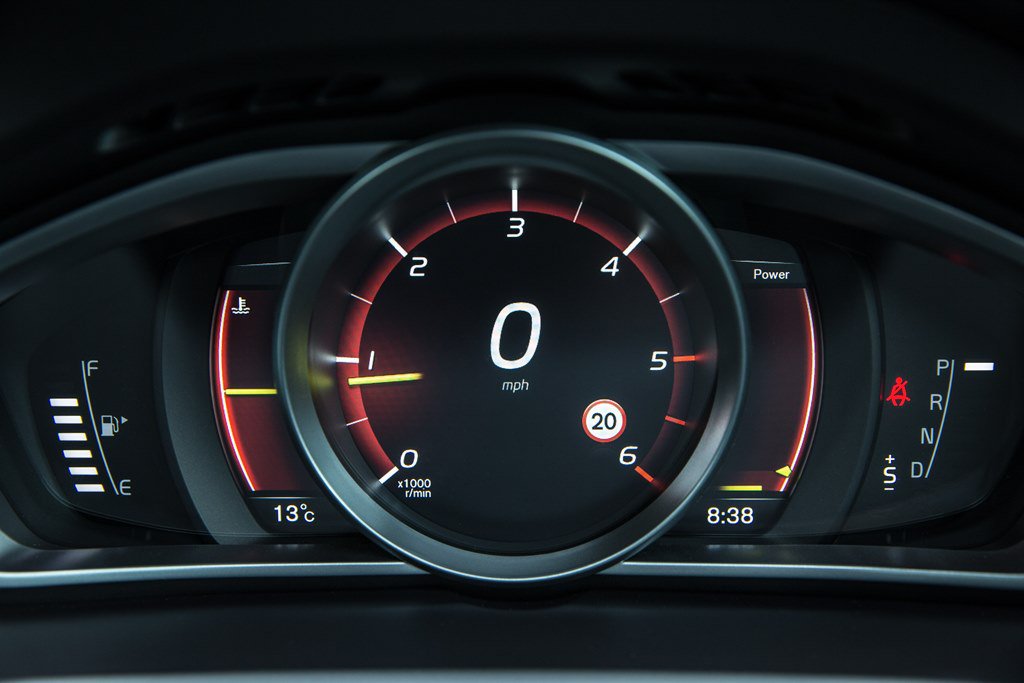 The current V40 range comprises the range-entry Momentum, mid-range Inscription and the top of the range R-Design. There’s also a rugged-looking V40 Cross Country which wears front and rear scuff plates and plastic cladding along the sills and over the wheel arches.

It’s now a much simpler range of nine variants (including ‘Nav Plus’ and ‘Pro’ sub-models), whereas prior to the 2016 reshuffle there were 14. This translates into less confusion for buyers in the showroom and a simpler and more cost-effective range for Volvo to build, supply and maintain. 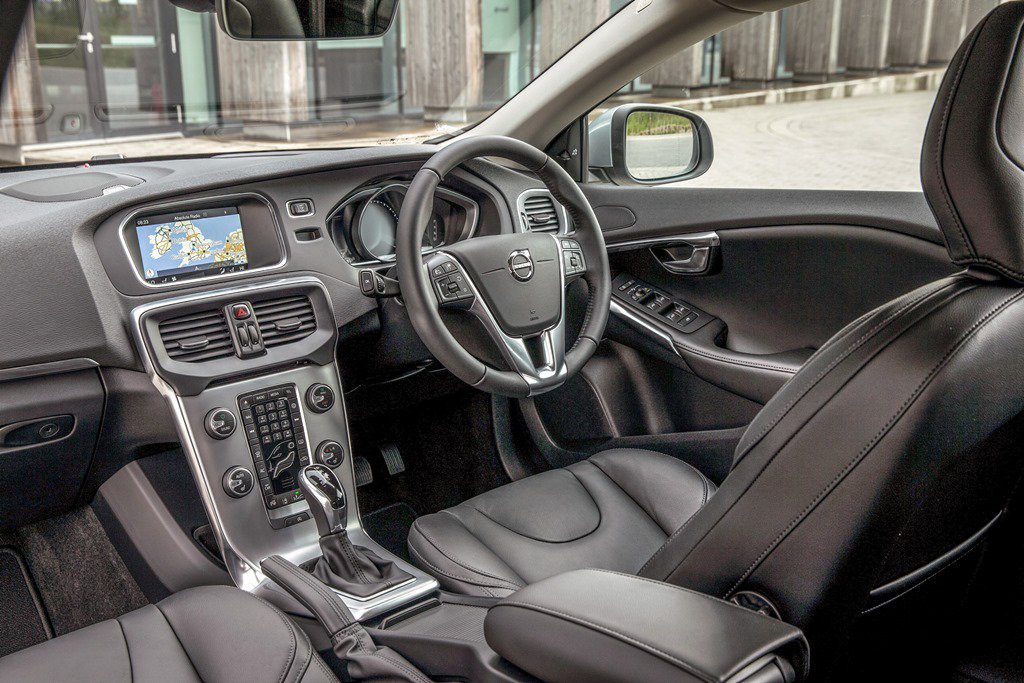 There are three driving modes: Elegance, Eco and Performance and the colour of the driver display and the instrument panel change according to which one you select. You can also select the steering weight of your preference – low, medium or high – by using the ‘My Car’ button located on the central console.

Upgrade to the Inscription trim and you get leather upholstery, 17in alloys, cruise control, parking sensors and a seven-inch touchscreen infotainment system complete with sat nav, while the R-Design models get numerous sporty exterior and interior details, bigger alloys and low profile tyres. The V40 uses Volvo’s previous-generation sat-nav system, rather than the latest tablet-style touchscreen setup on the new XC90. It’s old technology, and it shows. It’s fiddly and awkward to use, requiring multiple twists of a dial and presses of a ‘confirm’ button to set destinations. Once set though, the system itself works reasonably well and the mapping is clear from the high-res screen.

The updated V40 wears the most comprehensive range of standard safety systems in its class. It even has a pop up bonnet concealing a dedicated exterior airbag for pedestrians at the base of the windscreen. To keep you and yours secure, there’s an anti-theft alarm including an immobiliser, remote control central locking and home safe and approach lighting. Security experts Thatcham rate the V40 highly for resisting theft and break-in. 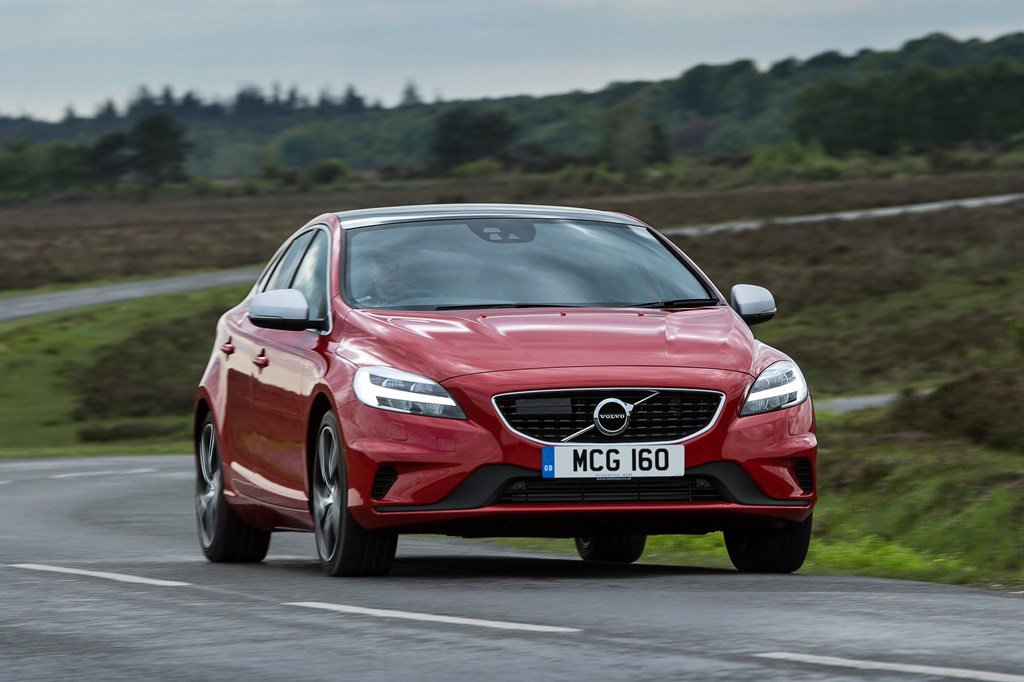 The V40 is a decent car to drive as it steers well, rides bumps and crests nicely (despite the sportier, stiffer suspension settings and bigger wheels reserved for R-Design variants), and body roll is well controlled and, as long as you’re making normal, unhurried progress, the V40 is easy to drive. 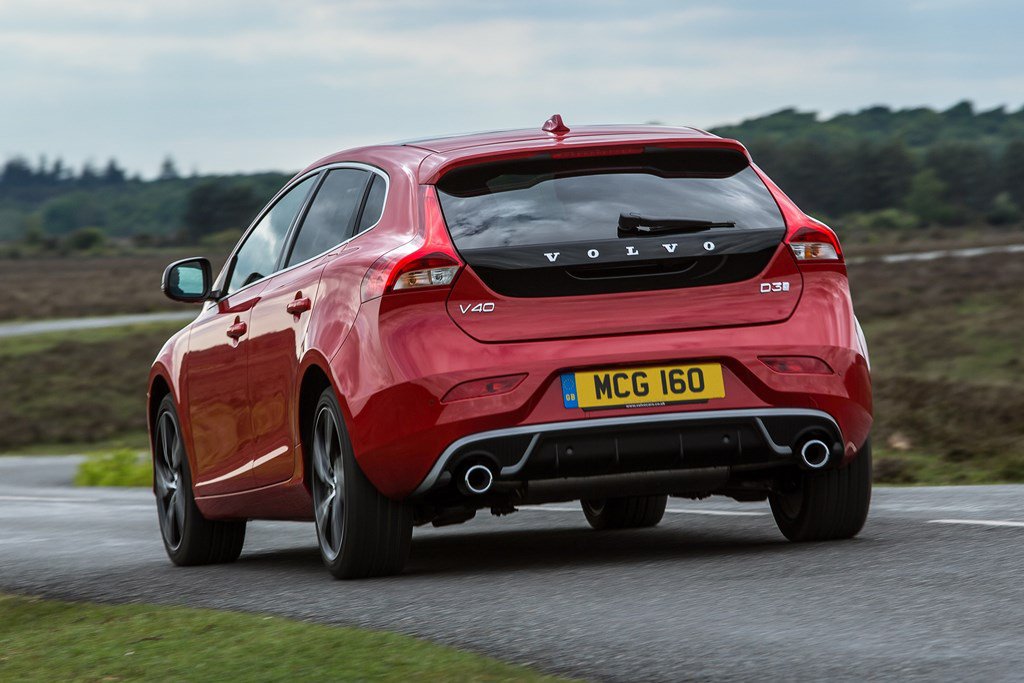 The six-speed manual gearbox is reasonably precise and does what it’s meant to do under normal driving conditions. However, it feels slightly notchy when under enthusiastic operation and doesn’t quite match the levels refinement from that found on the automatic.

The Volvo V40 is a worthy alternative to up-market family hatchback models such as the Audi A3 and VW Golf. Even though the V40 is now a bit long in the tooth (an all-new V40 is due in early 2020), the hatchback is actually one of Volvo’s biggest sellers, which is due in part to its versatility.

The wide range of engines available, all of which return strong economy and offer decent performance, add to the appeal of the Swedish hatch.

As hatchbacks go, the V40 isn’t the most spacious five-door on the market. The boot isn’t particularly great for this class and larger passengers in the back may struggle as space is not overly generous. A big selling point is the advanced safety kit included in the V40 which is some of the best on the market.