The subject of this week’s automotive ditty is the new Volkswagen Up GTI. In its compilation, I set myself a challenge to not mention the G*** word. So, here goes…wish me luck.

The letters GTI carry significant gravitas in the motoring world, and have done since the arrival in 1976 of Volkswagen’s first sporty family hatchback…you know, the one that shares its name with a good walk usually spoiled. Since then, it has arguably become a worthy benchmark against which many other types of sporty performance cars are measured.

In 1995, VW expanded their GTI line-up to include the smaller Polo GTI and earlier this year – in its latest iteration – the diminutive Up GTI city car. The regular Volkswagen Up is a handsome little car which combines cheekiness and sophistication in one quite stylish package. The GTI’s sportier visual treatment adds even more appeal. The fancy ‘Oswald’ black diamond-turned 17-inch alloy wheels are unique to the GTI, as are the go-faster stripes down the lower sides of the car. The rear roof spoiler is said to apply extra downforce to the rear wheels. Perhaps, but it certainly looks the part. Even the less astute will notice the generous application of GTI badging mounted around the car. Owners can choose from four paint colours: non-metallic ‘Tornado Red’ is the standard no-cost colour, but those wanting their Up GTI in white, silver or black will pay extra as they also will for a contrasting black roof.

In addition, there is a unique honeycomb grille with its iconic red pinstripe, rear privacy glass and red front brake calipers. Overall, the application of the traditional VW GTI aesthetic is tastefully executed. The cabin mirrors the layout of the standard Volkswagen Up, with good space for four adults and access via two or four doors, depending on which version you choose. As you might expect from a GTI, there are lots of sporty trims and logos sprinkled around the interior and the seats are finished in the trademark tartan cloth. The Up GTI also gets a flat bottomed steering wheel with thumb controls for the trip computer and media system.

The cabin of the Up is among the best of any city car and nothing changes in the GTI, with lots of high quality materials and appreciable attention to detail. Admittedly, the firm suspension and large (for a city car) 17-inch wheels give the GTI a rather firm ride, but you'd be hard pressed to hear any protestations from any of the plastics or metal fittings.

The sports seats in the front are comfortable and supportive, with lots of padding on the sides and base. Head a leg room is noteworthy for a car of this size too, although large passengers will find the rear seats a more cosy fit. However, if those in the front are willing to compromise and slide their seats forward a little, it's a comfortable fit in the back. To be honest, there’s no space in the middle for a fifth passenger, however small. 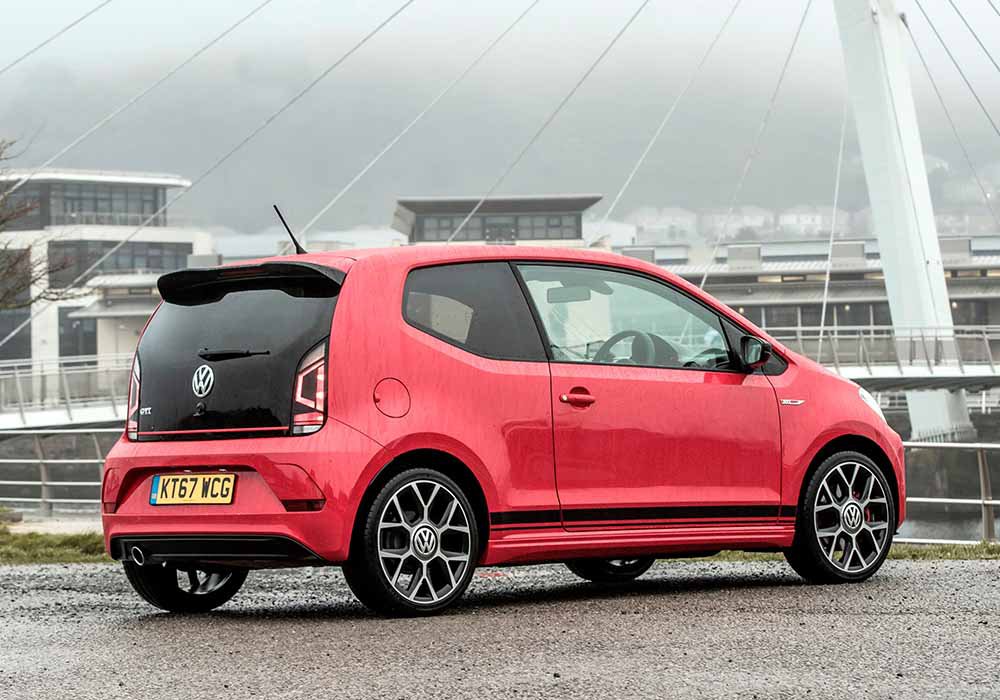 The instrument binnacle is dominated by the large speedometer and the well-sized door mirrors are large enough to erase the Up GTI’s small blind spots at either side. The wide windows also allow lots of natural light into the cabin, while the red dashboard covering gives the interior a vibrant feel that’s bolstered when it gets dark by ambient red lighting that frames the entire dash.

The Up GTI doesn’t get navigation, not even as an option. What you do get via VW’s downloadable ‘Maps + More’ app is TomTom’s integrated navigation via your Apple or Android smartphone which you can affix on the supplied dashboard mount.

Being a Segment A city car, the VW Up GTI isn’t blessed with a lot of boot space, but the available 251 litres is more than sufficient for a couple of flexible weekend bags or a weekly supermarket shop. The rear seats can be folded forward to provide more space for carrying occasional bulky items. 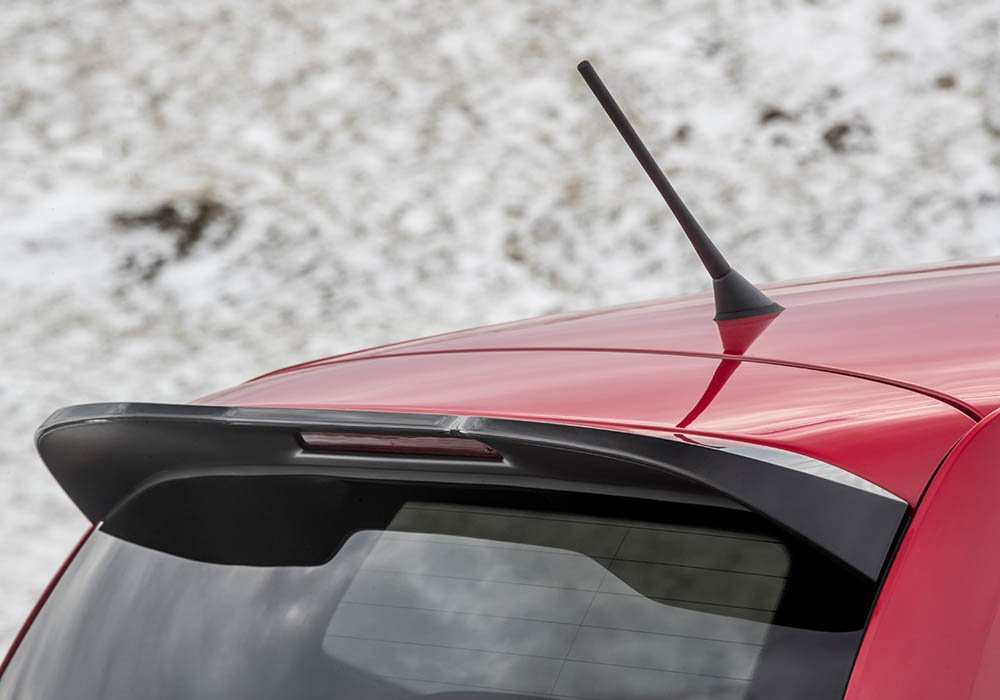 Standard Up GTI equipment is generous and includes manual air conditioning, heated seats and a six-speaker stereo system, which works with a small colour touch-screen alongside your smartphone. You'll also get electric windows and side mirrors and the de rigour GTI tartan upholstery.

Options include a panoramic sunroof, more adjustable seats and a fancier climate control system in place of the manual air conditioning. You can also spec a rear-view camera and a pack that includes cruise control and parking sensors. There's also an upgraded Beats sound system. 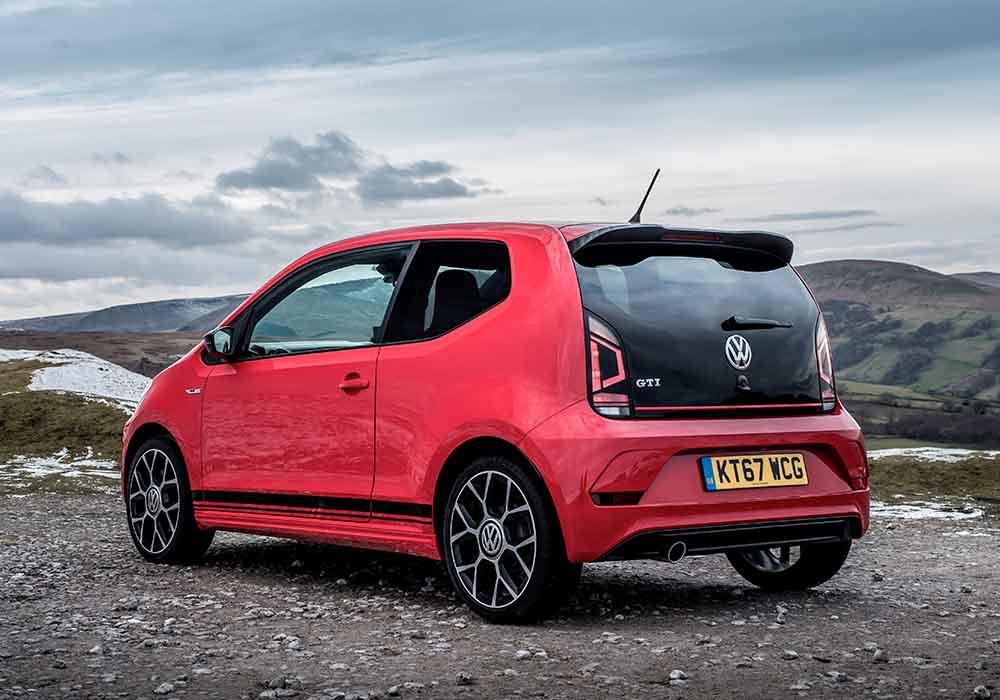 The Up GTI comes with exactly the same safety spec as every other VW Up. That means just four airbags – twin front and side – but the side ‘bags also extend upwards, so they also cover the same area that a curtain airbag would, which may be handy.

Systems like tyre pressure monitoring, electronic stability control and anti-lock brakes are provided as standard across the range, but autonomous city braking is a cost option. Isofix child seat mounting points are standard in the back. The standard Up earned the full five-star rating in Euro NCAP crash tests back in 2011, but the tests have become a lot more demanding in recent years. Blessed with its small dimensions light kerb weight, the Up GTI makes good use of its uprated, turbocharged 1.0-litre TSI petrol engine. Peak power of 114hp arrives at a heady but rev-happy 5,000rpm, which is admittedly not a lot. But factor in that low overall weight and high engine torque and the Up GTI quickly reaffirms its red pinstripe credentials with responsive handling and punchy acceleration.

Squash the throttle as you join a motorway and the Up GTI makes smooth and rapid progress via its well-geared six-cog ‘box. For a three-cylinder unit, the powertrain has lots of low-gear pull for overtaking and its delivery is predictable too, without any annoying torque steer jolts through the wheel. 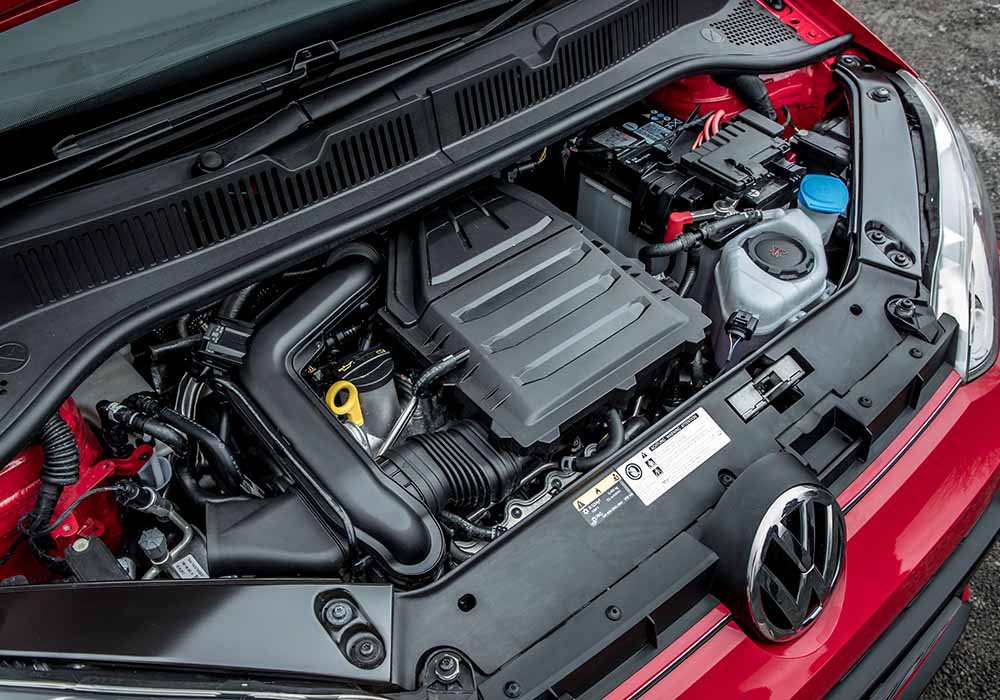 Mid-range performance is also good and provides a rewarding thump in your back through every gear; however, there's no DSG option, which means the GTI is very much a manual-only experience – and is all the better for it.

The engine’s audio rack is deep and in-keeping with the hot hatch experience too, even if it is piped into the cabin via the speakers. However, while the exhaust note is mostly artificial, it can’t be switched off or lowered and this means it can gnarl the senses after a while during an extended motorway run when undertaken.

The official top speed is 120mph but you don't need to break any laws to get the most out of this little GTI as its front-wheel setup provides lots of grip. Admittedly, the handling isn't the last word in cutting edge refinement – the light, overpowered steering and the car’s high centre of gravity erode that – but there’s lots of fun to be had in a go-kart type of way. 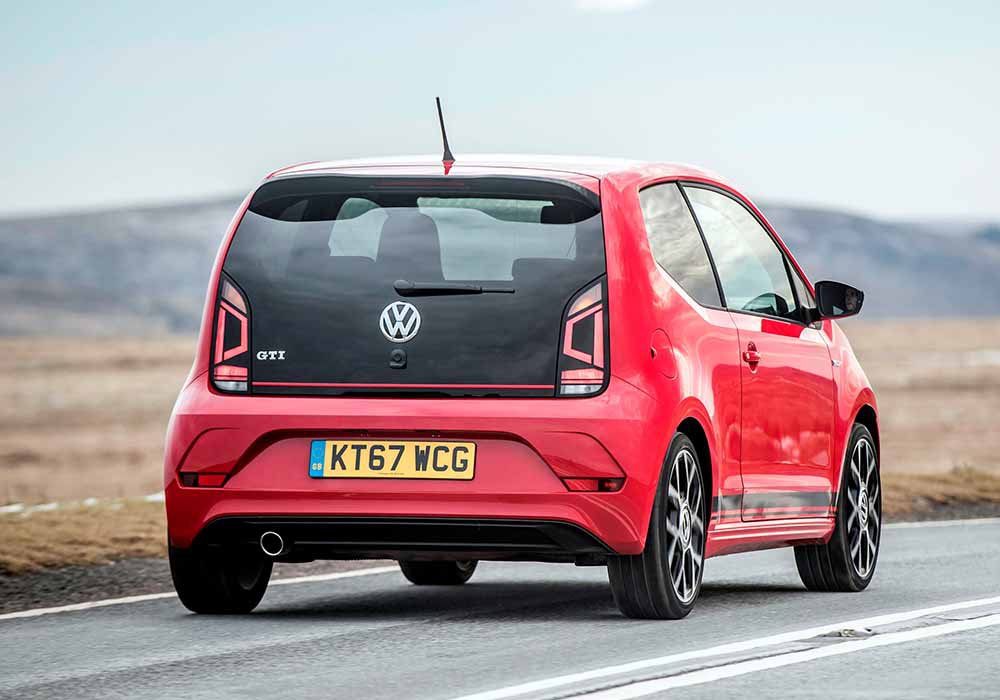 Few VW Up GTI owners will go the whole hog and take their car to its limits – where repeated ventures are likely to be costly. Mostly, it'll be a smart looking small car ideally suited for the urban pootle or traffic hopping rush.

In that environment, the Up GTI stands out with its light steering, excellent visibility and small turning circle and palatable running costs. Volkswagen claims a reputable 58.9mpg and 110g/km of CO2. For comparison purposes, neither the Fiesta ST at 47.1mpg, or Swift Sport (50.4mpg) are anywhere near the mpg/CO2 neighbourhood. 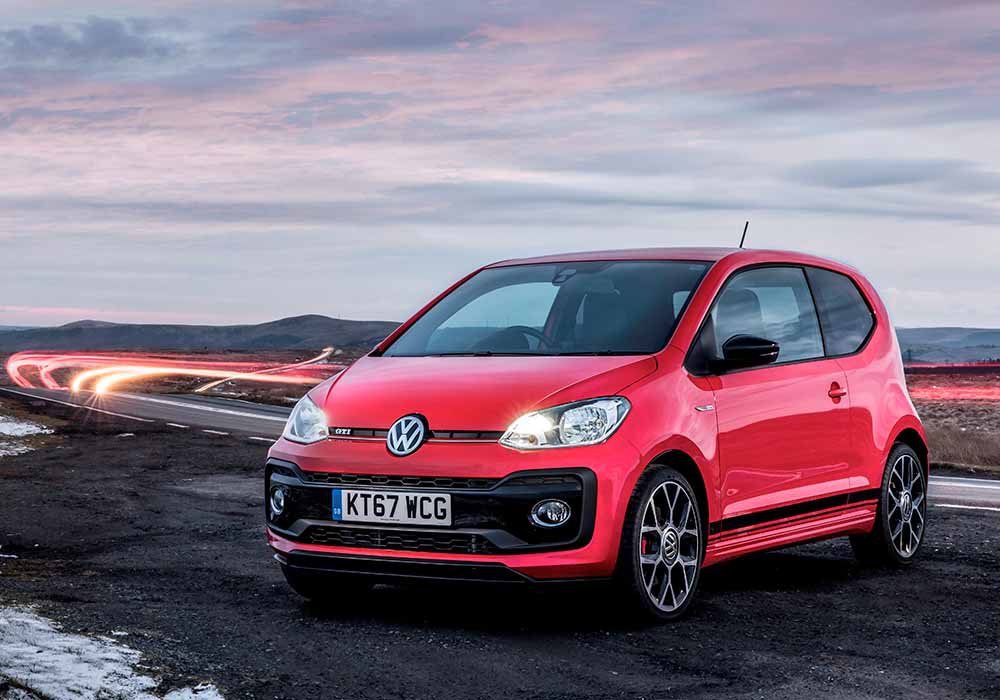 The Volkswagen Up GTi is the most inexpensive route into a hot(ish) hatch and provides genuine laugh-out-loud fun thanks to its meagre weight, playful handling and feisty turbocharged 1.0-litre engine. It returns a hundred smiles per gallon and is one of those cars you’ll absolutely love behaving badly in.

It might struggle to justify its price premium over the standard 89hp car, but the Up GTI is a hugely entertaining return of the old school pocket rocket.

Now, if you’ll excuse me, I’m off for my weekly round of g… Close, but nailed it!