The Volkswagen Touareg is a large, premium SUV with a spacious interior, attention-grabbing styling and enough new technology for a sneaky kick at the shins of rivals such as Audi, BMW and Mercedes.

This third-generation Volkswagen Touareg is quiet and smooth on the road, comes with an impressively powerful engine and is packed to the gunwales with advanced technology – attributes that should make it popular with business and family buyers alike, even if it lacks the option of seven seats (see Tiguan Allspace review). Since the demise of the Phaeton, Volkswagen is keen to remind us that - sitting atop the VW price list as it does - the Touareg SUV is currently, and always will be, its flagship car. When considering that its rivals include the likes of BMW’s X5, the Land Rover Discovery, Merc’s GLE and even (the VW Group’s) Audi’s Q7, you begin to understand why Volkswagen has pebble-dashed the new Touareg with every available technology. 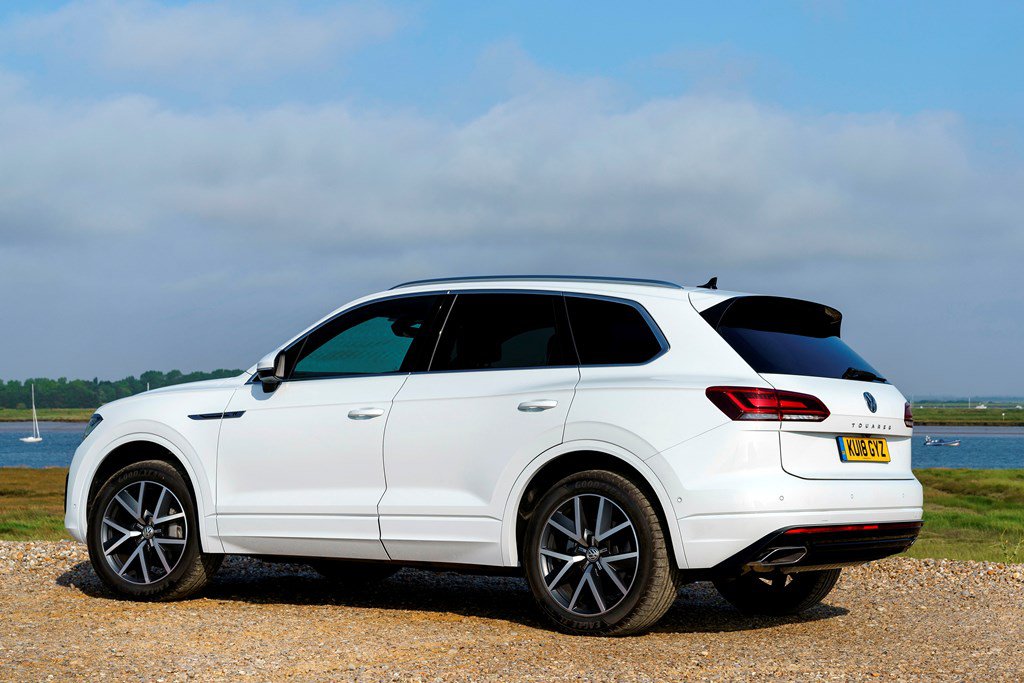 The overall shape of the latest Touareg adheres to the SUV styling convention of a high-riding two-box car, but VW designers have brought the detailing right up to date in deference to VW’s current design-speak.

The new Touareg is a little longer and wider than the previous iteration and the car's visual evolution has seen it dismiss the original's softer, rounded curves for a much sharper image with purposeful-looking creases and a signature chrome grille, similar to that on the recently-launched Arteon saloon. The new full-width grille incorporates the new headlight clusters and there are certainly echoes of the new Audi Q7 about the car (understandable, given both cars are built on the same MLB architecture). The designers have given the all-new Touareg a more aggressive, modern look that wouldn’t be out of place in a Range Rover showroom.

Only available as a five-seater (there are no plans to introduce a seven-seat configuration), the new Touareg isn’t as boxy at the rear as some rivals and the standard rear spoiler is a neat touch. To finish off the exterior aesthetic, available wheel sizes range from 18 to 21 inches. In an SUV of this size, keeping to a five-seat configuration delivers an exceptionally roomy cabin, while opting for a lighter upholstery hue creates an environment of bright openness and space. The electrically adjustable front seats are heated and can be equipped with cooling and massage functions.

The star of the show is Volkswagen’s new ‘Innovision Cockpit’ dashboard display, which is standard on the top-end R-Line Tech model and optional on all lesser trim grades. Coupling a high-definition 12.0-inch instrument display with a huge 15.0-inch infotainment touchscreen system looks superbly impressive. The layout and functionality of the system may be configured as desired - which may take some getting used to. But, like electrically-adjustable seats with memory function, you’re likely to only do it once. Throughout the cabin there’s ample space for tall adults in both the front and rear seats and apart from the surprisingly shallow tray under the armrest, all storage bins and cubby holes are more than adequate for a family’s daily detritus.

The generous space continues into the boot with 810 litres available. With the back seats in place, there’s more room for a few sets of golf clubs or a large baby buggy than in either the Audi Q7 or Mercedes GLE and the Touareg only lags slightly behind the capacious Q7 with row two folded away. The flat floor makes it a doddle to load bulky items – such as a bike with its wheels attached – and you can even lower the Volkswagen Touareg by 4cm at the touch of a button to make it easier to lift in some heavy boxes. 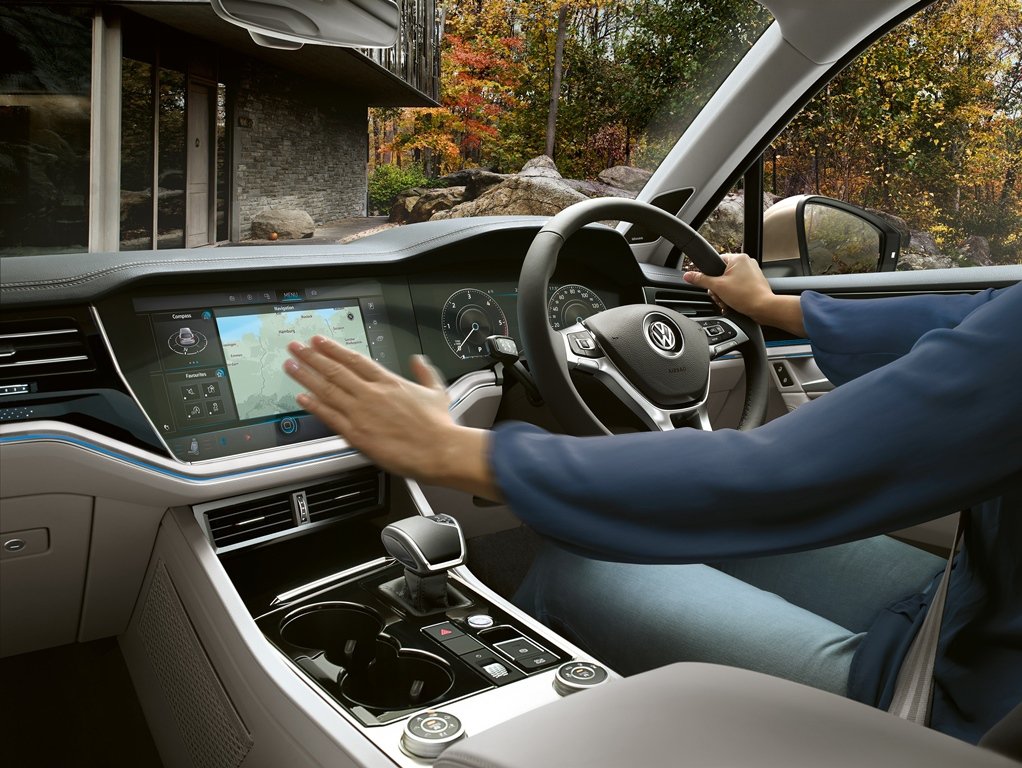 At launch, there are three trim grades available on the new Touareg: SEL, R-Line and R-Line Tech.

The upgrades you get on R-Line models are largely cosmetic, but you do get more USB ports and wireless phone charging, along with a powered tailgate, four-zone climate control and a parking assistant. 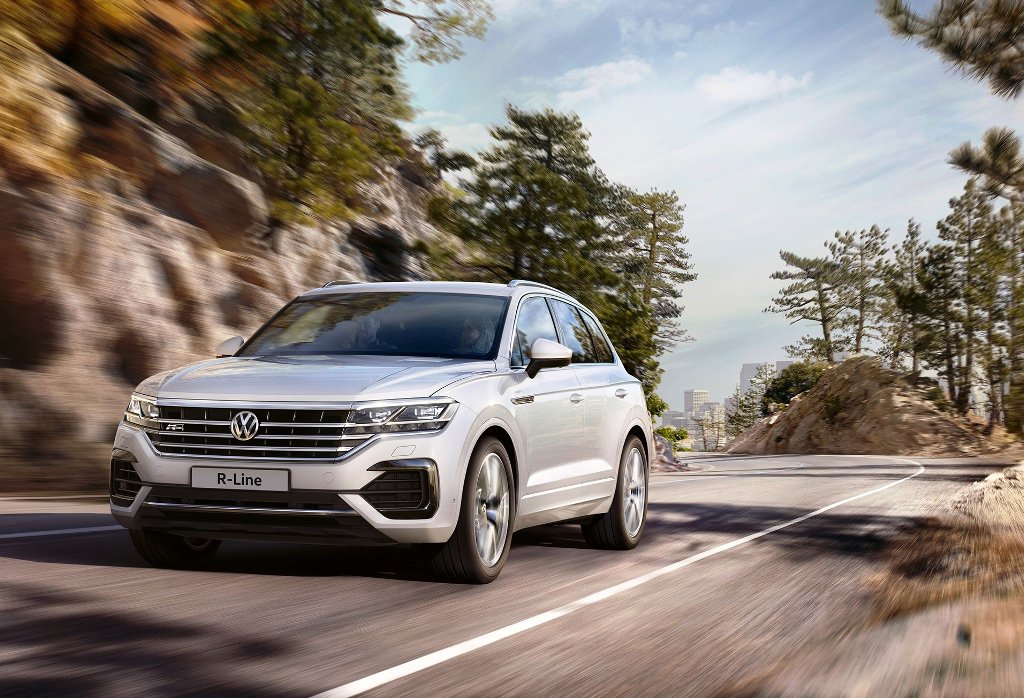 Again, on the transmission front, the only choice is an eight-speed automatic Tiptronic gearbox, while all cars get 4Motion four-wheel drive as standard.

Arriving this autumn will be a 338hp V6 petrol and towards the end of the year we can expect a potent 4.0-litre 419hp V8 turbodiesel to top the range. In China, VW has launched a 374hp plug-in hybrid, but as yet there’s no confirmation that this power plant will make its way to Europe. 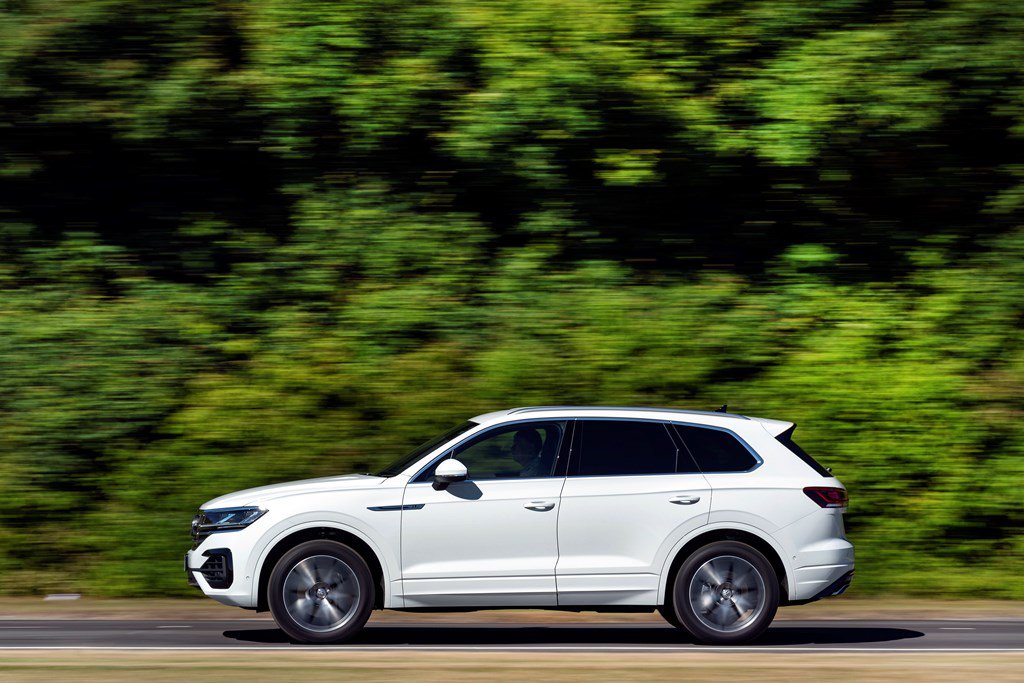 The Volkswagen Touareg was only last week awarded five stars after crash testing by safety organisation Euro NCAP. Standard safety equipment across the board includes six airbags, an active bonnet for better protection of pedestrians and a system that locks on the brakes after an accident to help prevent further collisions.

Automatic emergency braking is also standard fare, along with adaptive cruise control, traffic sign recognition and a system to warn you if you’re found to be wandering out of your lane. There’s a whole heap of other clever safety stuff available if you’re prepared to pay extra, too. That includes night vision, intelligent headlights that bend their beams around oncoming cars and a system that’ll effectively stop/go the car for you in traffic. All versions of the new Touareg offer a 3.5 tonne towing capacity when hooked to a braked trailer. The ball neck of the towing bracket extends and retracts from the vehicle floor at the push of a button. For those venturing off-road there’s a full suite of off-road driving programmes fitted as standard, which instils confidence for horsebox owners and caravaners to traverse wet or muddy fields without fretting about getting bogged down.

It’s also helped by the very clever trailer-assist system, which lets you take your hands off the steering wheel and reverse a trailer using the pedals and the rotary mirror adjustment knob on the driver’s door. While it will take some getting used to, it does make manoeuvring a trailer much simpler than having to continually wind steering lock on and off. The 3.0-litre TDI V6 diesel lurking under the bonnet of the Touareg is all-new – and is excellent in all respects. Refinement is impressive and VW claims a 0-62mph time of 6.1 seconds with a maximum speed of 146mph. Impressive numbers for a car that weighs a shade over two tonnes.

There are five drive modes available on the new Touareg: Eco, Comfort, Sport, Normal and Off-Road.

Rear-wheel steering points the back wheels in the opposite direction to the fronts at low speed to help manoeuvring and parking and in the same direction at high speed to aid stability. This system really comes into its own in town, giving this full-size SUV a turning circle similar in radius to that of the current Golf, while on the motorway, it makes quick lane changes feel safer. Push on along A- and B-roads and the Touareg feels every inch like the large car it is. It doesn’t feel as agile as you might expect, but while the car’s handling and steering are both excellent, there's an ever-present feeling of raw bulk – a reminder that you are, indeed, driving a two-tonne-plus vehicle.

When you’re off winding roads and just want to cruise on the motorway, the Touareg creates very little fuss, riding smoothly and transferring little wind and road noise into the cabin. The adaptive cruise control exhibits a little more intelligence than most in that, as well as detecting other traffic and slowing down/speeding up as necessary, it uses data from the navigation system. This means it will slow down and accelerate as the speed limit changes - and even slow down if it detects a bend or roundabout ahead. The new Touareg arrives with an enviable sales history with UK buyers snapping up over 45,000 units since its launch in our market in 2002. The new Touareg doesn't move the large SUV segment forward, but it is a significant improvement over its predecessor when it comes to handling, practicality and tech.

It might lack the prestige of the Audi Q7 and Range Rover Sport, but it ticks the same luxo-barge boxes as those two, while also adding cutting edge tech and limo-like space to an otherwise familiar large SUV formula.