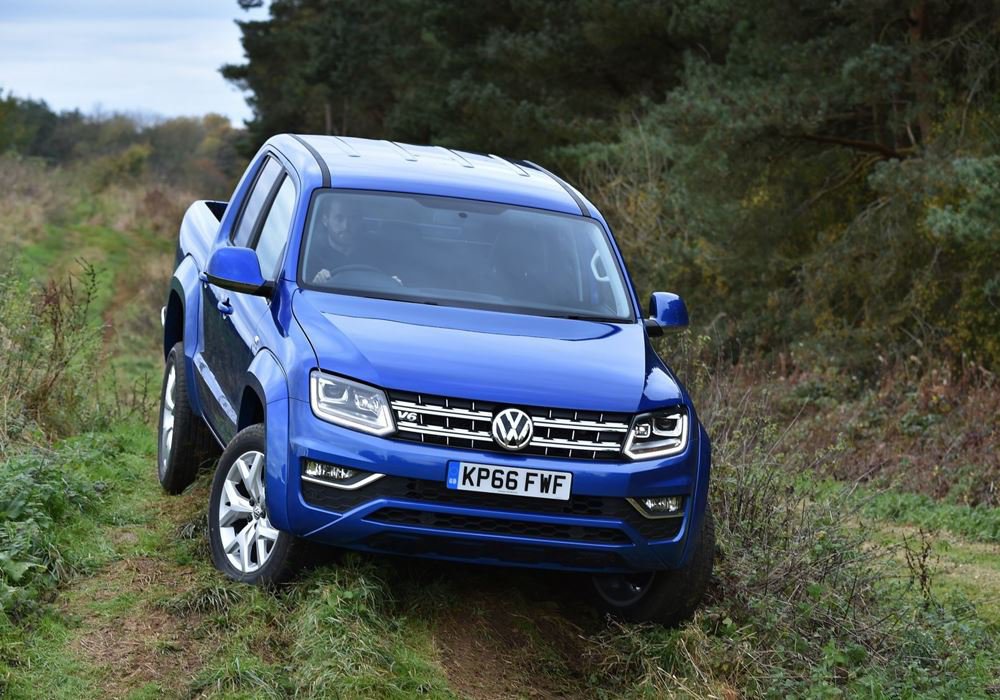 I sincerely hope the Inuit – those indigenous peoples of the Canadian Arctic formerly known as Eskimos – are reaping the just rewards of lending their language to modern car names. If not, they need a good lawyer. This time, it’s 'Amarok', the Inuit name for ‘wolf’.

Setting aside the Mk1 VW Golf/Caddy pick-up of over 40 years ago, the Volkswagen Amarok is the first modern-day foray into the pick-up market by the German manufacturer. It made its European debut at the 2010 Geneva Motor Show and became available in the UK later that year.

The Amarok is doing rather well for VW in the UK, with over 15,000 units sold since its introduction seven years ago and 2016 was its best year so far. That local sales performance along with further global popularity has led to a light cosmetic refresh for its 2017 model year, along with the introduction of a new V6 diesel engine. It offers an appealing blend of car-like cabin and with on- and off-road ability and a load bay big enough to carry a Euro pallet. 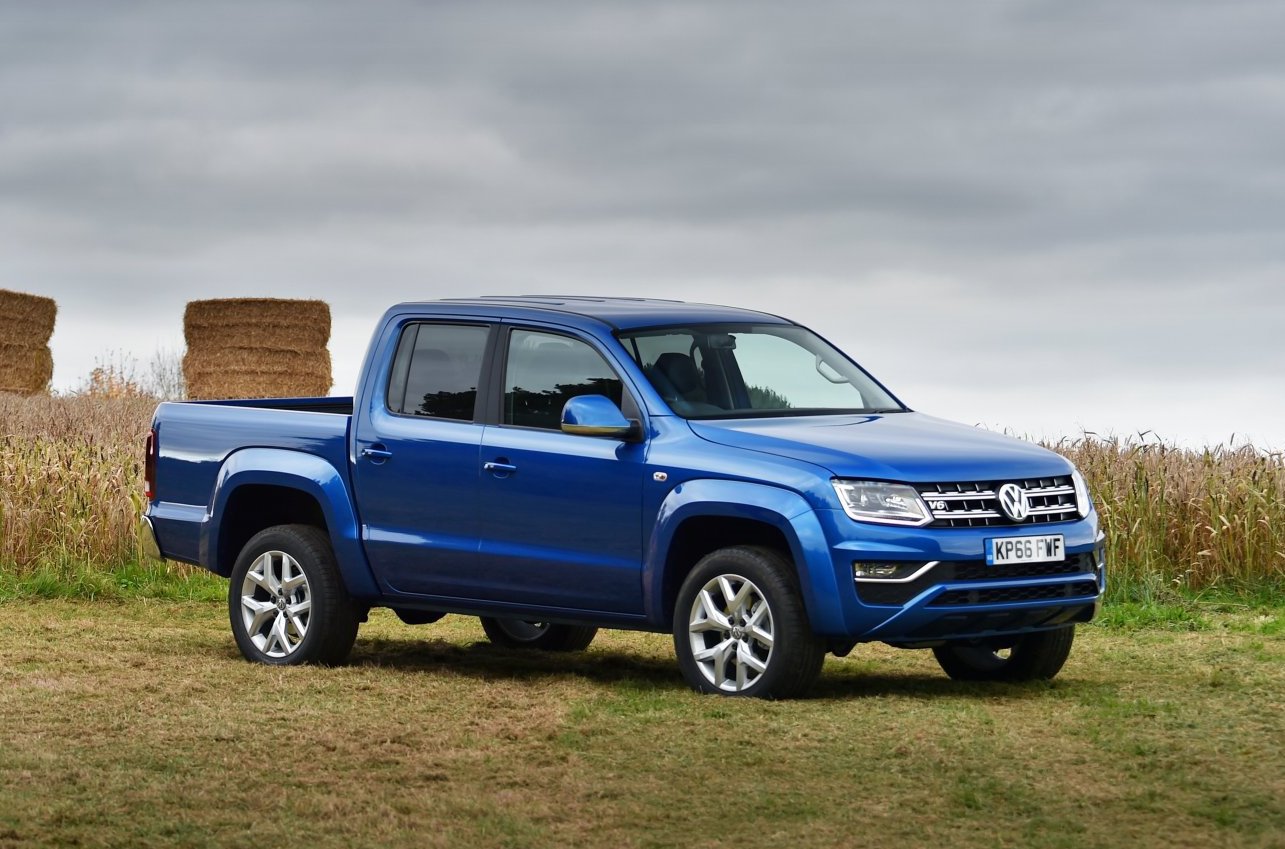 The only body configuration available for the Amarok is a four-door, five-seat double cab. That aside, the 2017 Amarok pick-up is a handsome workhorse and certainly looks the business with crisp, angular lines which can best be appreciated from the front three-quarter. There’s a bold new face in the form of a new front bumper and radiator grille design including front fog lights. New alloy wheels and a third brake light with LED technology finish off the visual enhancements. 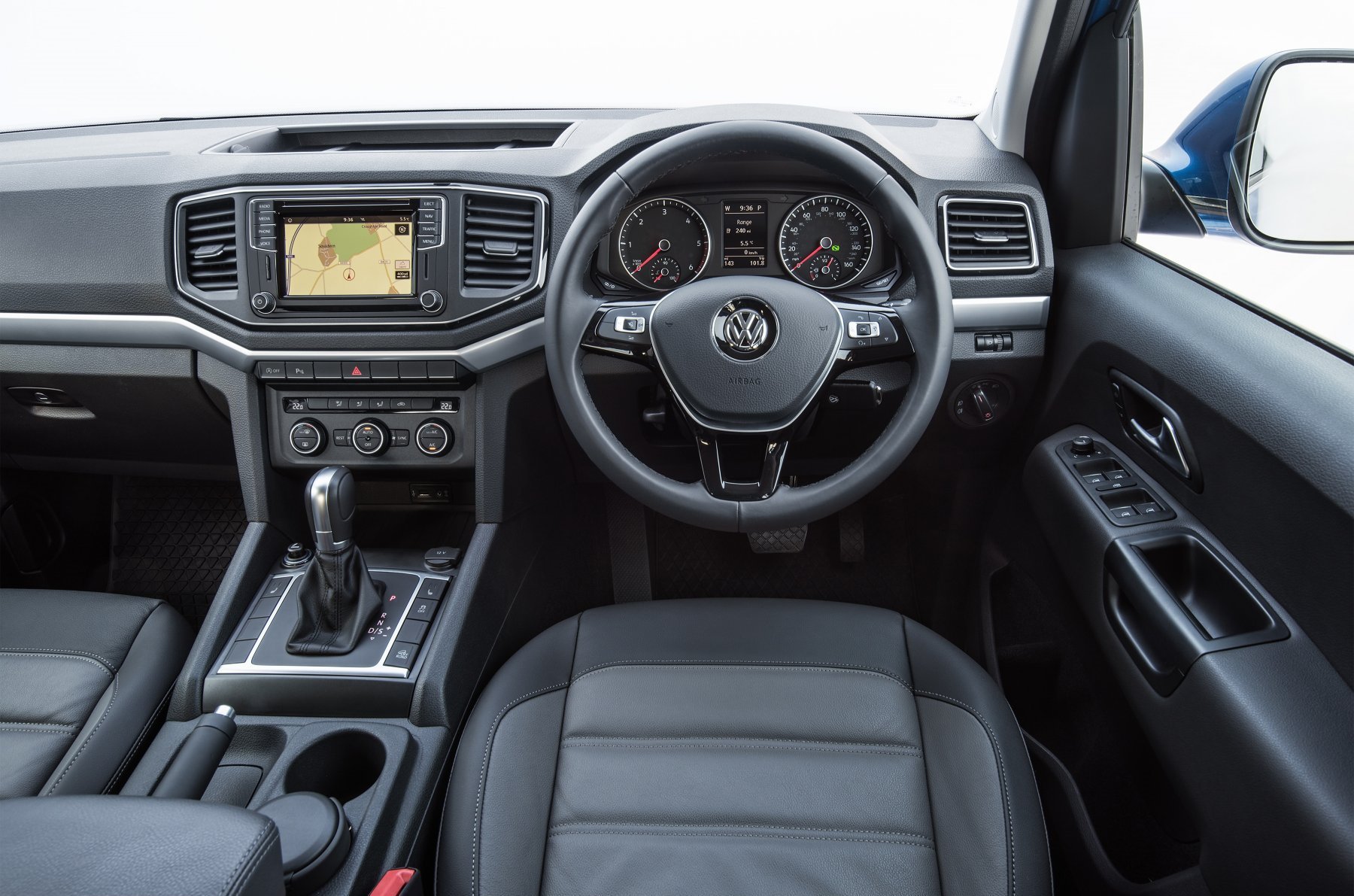 Thanks largely to the VW Group parts bin, the angular theme continues on the inside with an all-new dashboard and upgraded materials. The new fascia design is attractive and well put together, especially so for a commercial vehicle and helps to give the cabin an upmarket ambience. The cabin itself is wide and tall, and offers excellent room in the front.

Storage is good, but not overly great and the central cubby lid looks big but mainly covers the handbrake. The glovebox isn’t what you’d call cavernous, either. On the plus side, there is a dash-top tray, big door bins and an area in front of the gear shifter to store things.

Accommodation in the back is average for taller passengers, and there are no vents or center arm rest. The flip-out twin cup-holder on the floor of the rear compartment looks highly susceptible to spilt coffee and damage too. You can fold up the rear seat base in a 60:40 split but there is no storage under the floor. 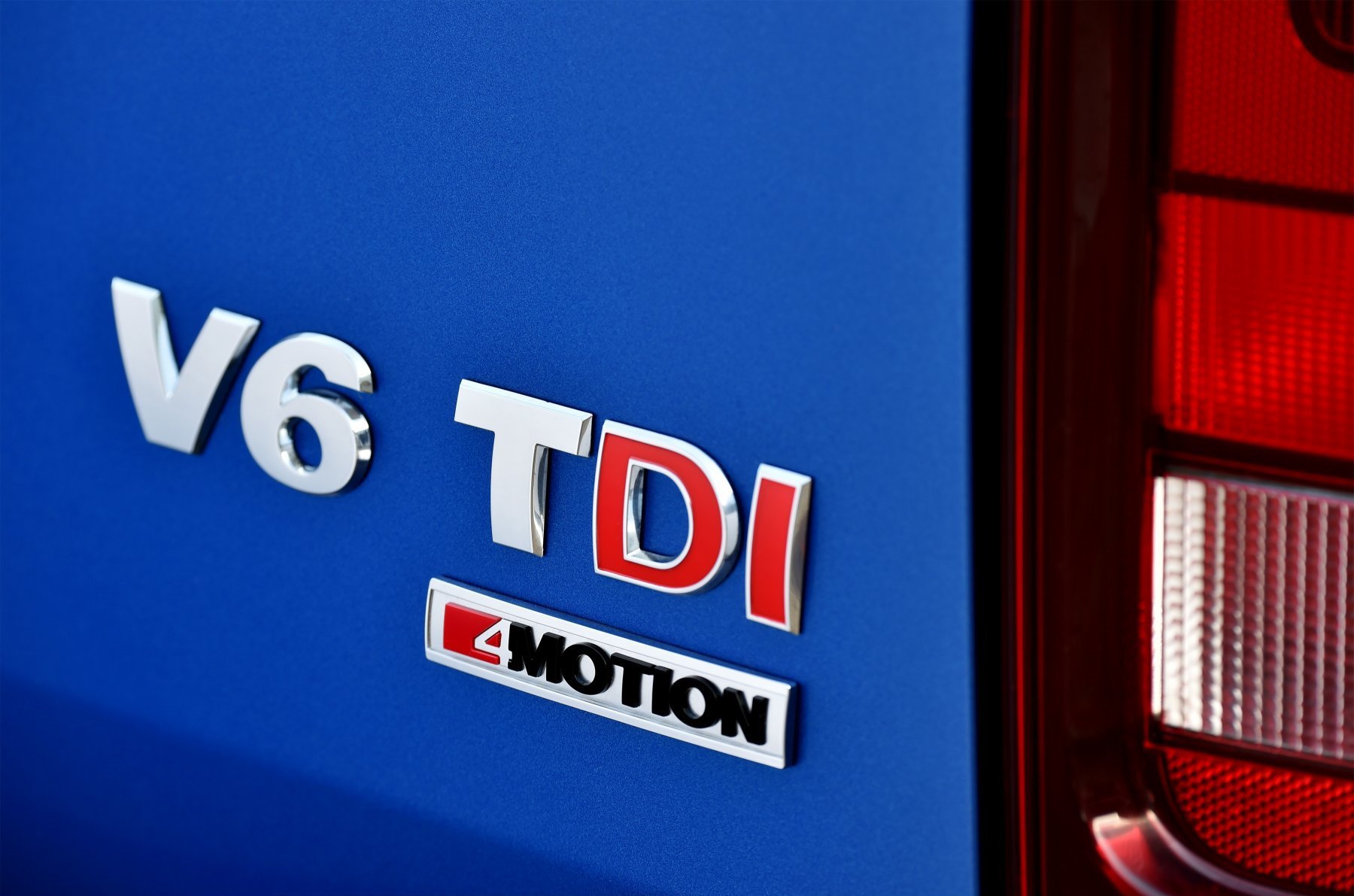 There are two current trim grades – Trendline and Highline – for the 2017 model-year Amarok. As you would expect, both are very well equipped with loads of standard kit.

Upgrade to Highline – as most do – and you'll find essentials and luxuries such as parking sensors, a reversing camera, bi-xenon headlights, 18in alloy wheels, leather upholstery and heated front seats as standard. 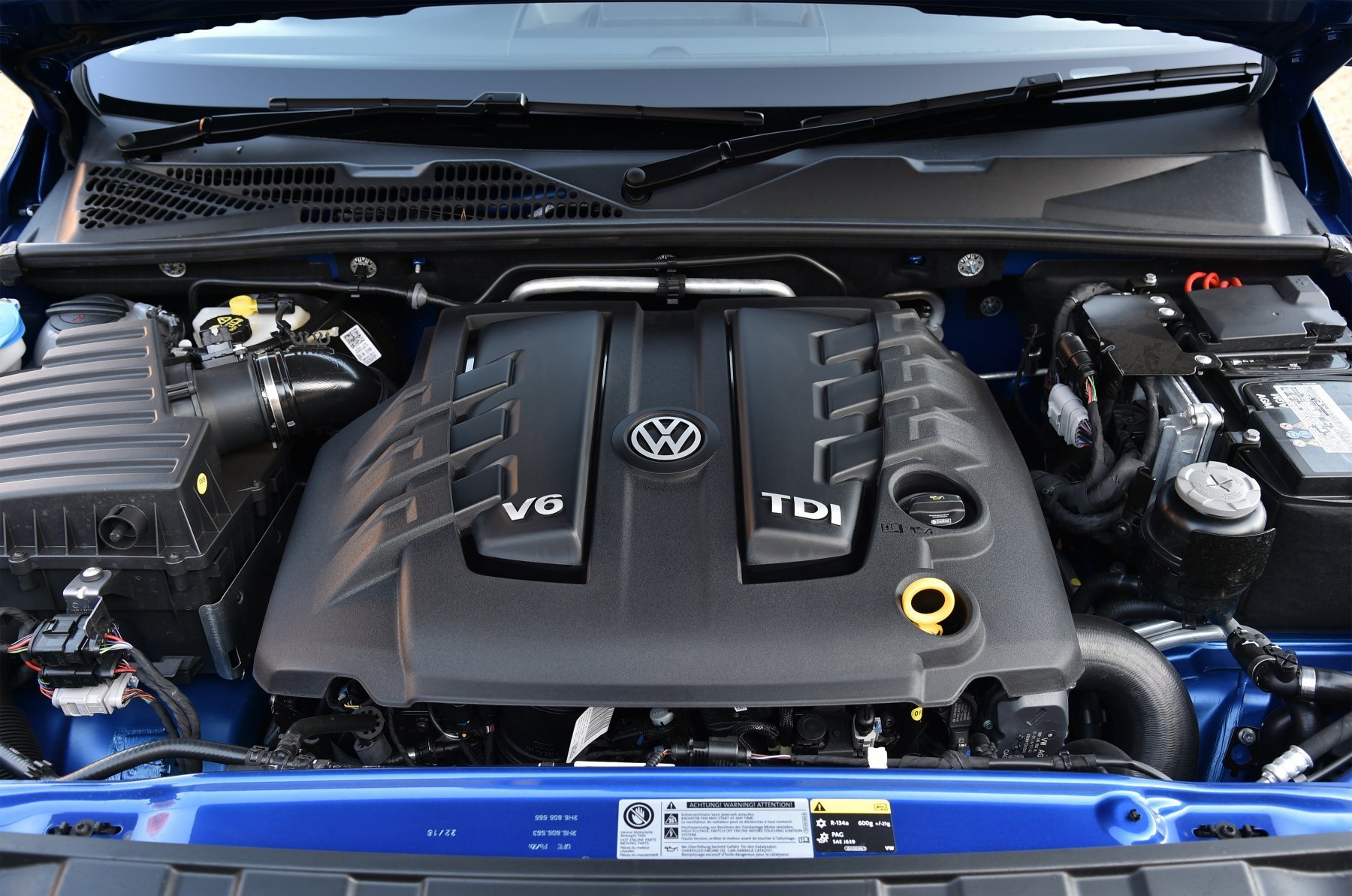 The headline feature of the updated Amarok is the new 3.0-litre V6 diesel engine that replaces the 2.0-litre TDI unit from the previous model. It’s a 90-degree V6 from the same family as the engines used in the Audi Q7 and Porsche Cayenne. It is available in two states of tune (204ps and 224ps), with the most powerful version boasting a colossal torque output of 550Nm.

It gets better…the ‘overboost’ function on the 224ps unit lifts the Amarok’s power to 245ps. Kicking in at 70 per cent accelerator extension, overboost is delivered in third and fourth gears from 31mph and hangs on for 10 seconds. After a five-second rest, overboost can be accessed again.

Rivals from Nissan, Mitsubishi, Toyota and Ford cannot match the Amarok V6 TDI's combination of power, efficiency, towing capacity and acceleration. The new V6 TDI offers up to 23% more power and 28% more torque while delivering lower emissions and decreased fuel consumption compared to the previous 2.0-litre bi-turbo diesel that was previously the most powerful option.

There is no manual option for the 2017 Amarok. Instead, both the current Trendline (204ps) and Highline (204ps or 224ps) models are available only with an 8-speed automatic, which is optimised to handle the high torque output of the V6 engine. Transmissions are permanent all-wheel-drive using VW’s excellent 4MOTION system, with a self-locking Torsen centre differential to ensure terrific off-road ability and towing prowess.

All variants have an electronic differential lock (EDL) by automatic application of the brake, which prevents the wheels spinning on one side. Thanks to the EDL, the power from the drive system is always delivered to the wheel detected as having the best traction. 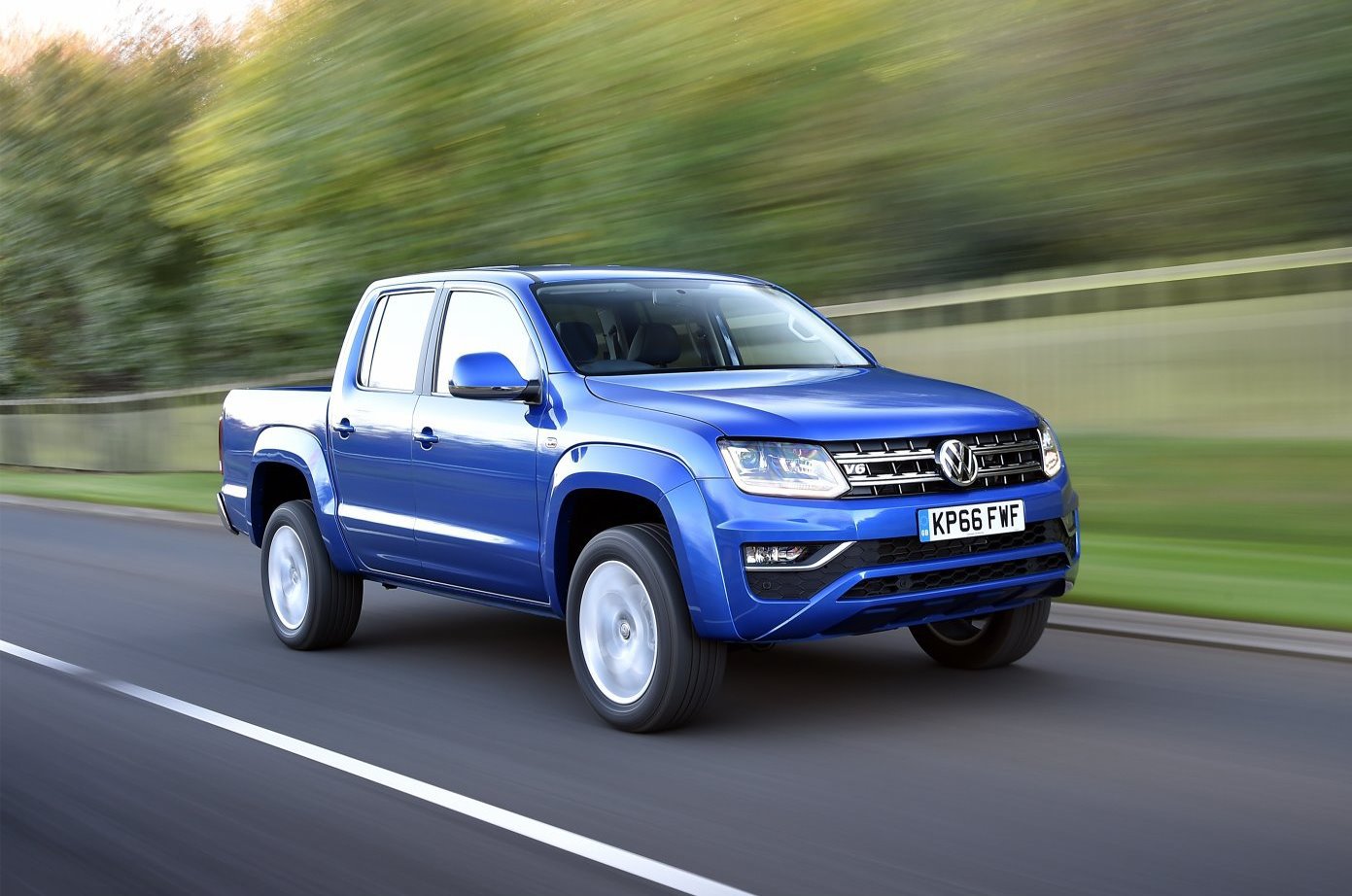 While the effortless power delivery of the tried-and-tested 3.0-litre V6 is a given, further credit must go to Volkswagen chassis engineers for the well-balanced suspension. In most pick-ups, the match of the suspension front to rear is poor: too soft up front in pursuit of passenger comfort and too hard at the rear pursuing optimal payload and towing ability. The result is usually a pick-up that’s blancmange-like in front, yet one that rides like a wild mustang in the rear.

Not so the Amarok. Volkswagen has got this vehicle so well balanced that those inside sense they’re riding in something altogether quite different.

On the road, the Amarok is hard to beat. It demonstrates excellent driving manners, with solid, predictable handling and refinement. The Amarok’s ride is exceptionally good for a vehicle with an payload of 1,110kg. The steering is well weighted and provides enough feedback on what's going on beneath the tyres to allow fluent, quick progress. 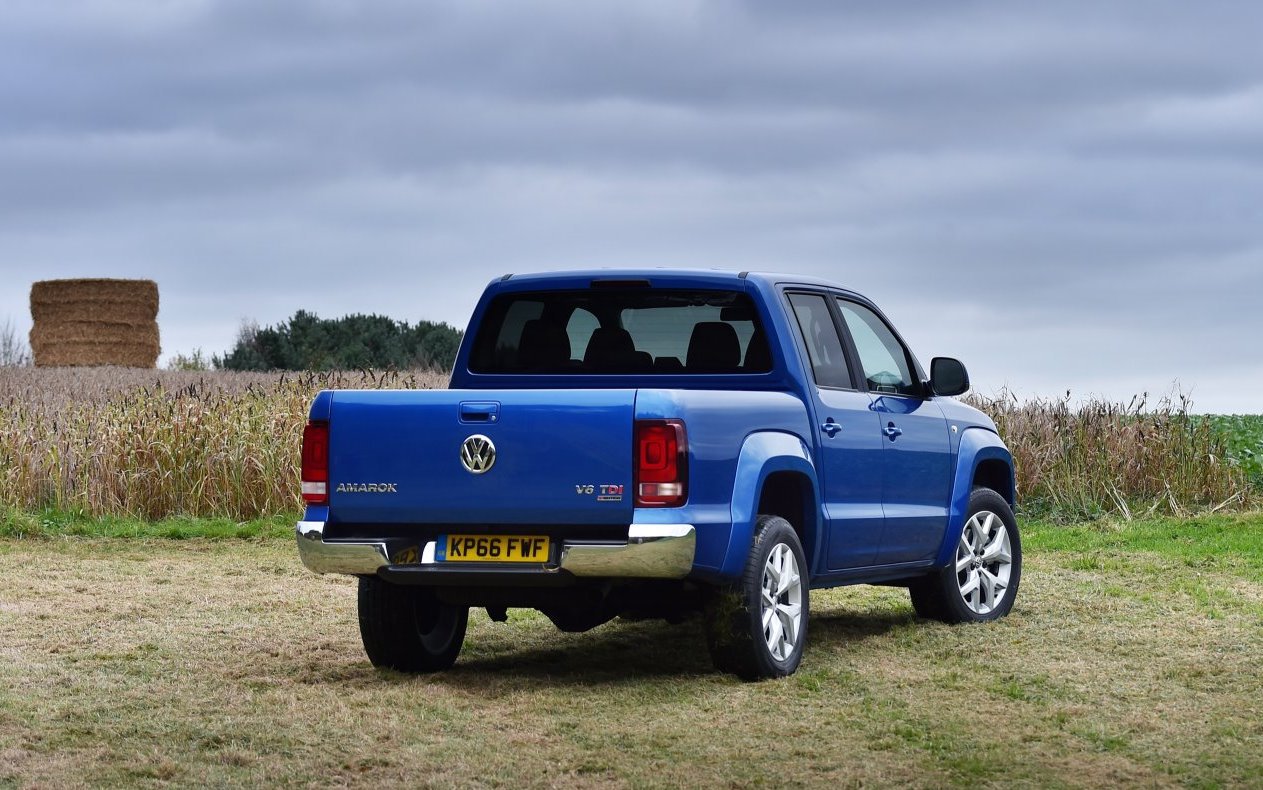 The UK pick-up market has seen phenomenal growth over recent years and, despite tough market conditions, more than 44,000 pick-ups were registered in the UK last year – a leap of 21% compared to 2015 – a clear indication of a growing audience.

As a turbo-diesel commercial vehicle with a two-tonne curb-weight, the Amarok is a gratifying thing to drive. It’s classy, well-built and a good looker. Until the Mercedes X-Class arrives early next year, with its promise of a 265ps V6 diesel, it’s the most powerful one-tonne pick-up and my current class favourite.

You can almost hear its rivals crying wolf.