The Toyota Hilux lays a valid claim to being the best-selling one-tonne pickup of all time, with over 18 million global sales since its introduction in 1968, eventually reaching our shores in 1972. Recently, the all-new, eighth generation Hilux was introduced to the UK market – a little late, but good things are often worth waiting for.

The Hilux’s reputation is one of bombproof ruggedness and durability – its cockroach-like stubbornness to die on Top Gear is testament to that, but this latest model is tasked with appealing to a broader audience in a congested segment that is set to become a lot busier. Seasoned workhorses such as the Nissan Navara, Ford Ranger, Volkswagen Amarok and Mitsubishi L200 have had recent updates and enhancements to increase their appeal, with newcomers such as the Fiat Fullback – essentially a redressed L200 – muddying the waters. The imminent arrival of Renault’s Alaskan and the posh Mercedes-Benz X-Class will broaden the sector’s appeal even further.

Toyota has left no stone unturned with the new Hilux. It’s comprehensively better than its predecessor, both on and off-road. With around 36,000 units sold in UK and Europe last year, it’s a hugely important model for the Japanese car maker. The new Toyota Hilux looks quite different and many of the changes are a case of function before form. The clipped corners of the snout and rear end are designed to provide greater clearance at the corners of the vehicle. The car is longer and wider than the old model and rear wheel articulation is now 520mm on both sides; it was uneven before. The range consists of four trim grades; Active, which is available in all three body styles, while Icon, Invincible and Invincible X are available as double cabs only. Entry-level Active models are fitted with 17in steel wheels, automatic headlights, air conditioning, Bluetooth, front cool box, and heated and electrically adjustable wing mirrors as standard. Most will opt for this trim when using their Hilux mainly as a commercial workhorse.

Upgrade to the Icon and you’ll find a 4.2in touchscreen housing Toyota’s Touch2 infotainment system complete with a reversing camera and DAB radio, plus goodies such as 17in alloys, cruise control, hill descent control and folding door mirrors.

Stepping up to the Invincible trim, which is expected to shift the highest number of units in the UK, and you’ll discover the Hilux gets luxuries such as 18in alloy wheels, LED headlights, climate control, keyless entry and Toyota’s Safety Sense active technology. Top-spec Invincible X adds satnav, front and rear parking sensors, leather furniture with heated front seats, scuff plates and a handful of exterior cosmetic embellishments. Once inside, the driving position is high with a commanding view of the road and rear visibility is good. The driver’s seat is comfortable and the dashboard is logically laid out. There’s a mixture of plush-feeling materials and more hard-wearing plastics on the dashboard and the insides of the doors. 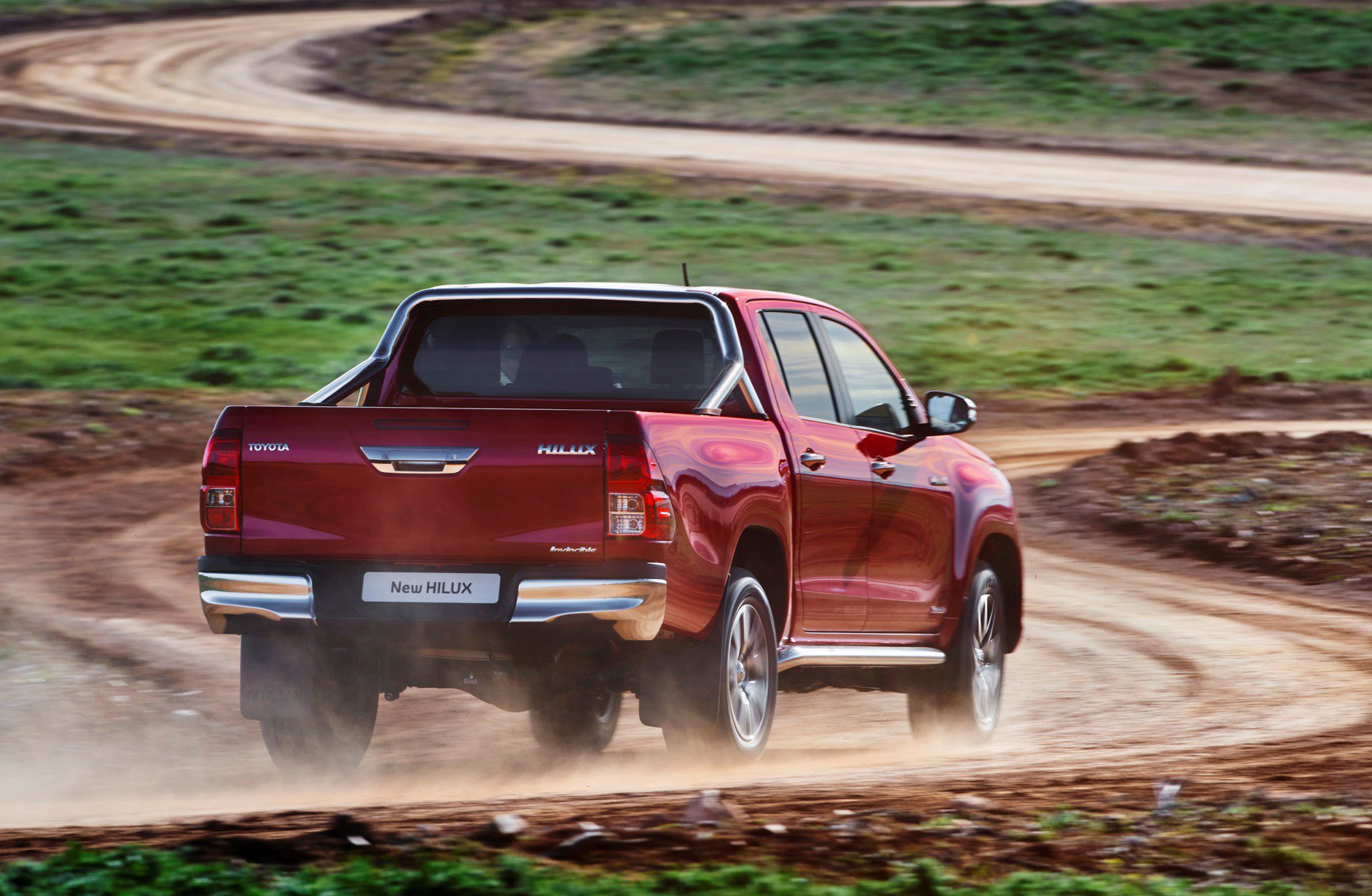 UK and European buyers get only the 2.4-litre turbodiesel engine, but Toyota is quick to point out that it offers 148 bhp and 400 Nm of torque, both of which are more than the outgoing 3.0-litre which was introduced way back in 2007. Transmission options are a six-speed manual gearbox or a six-speed automatic. 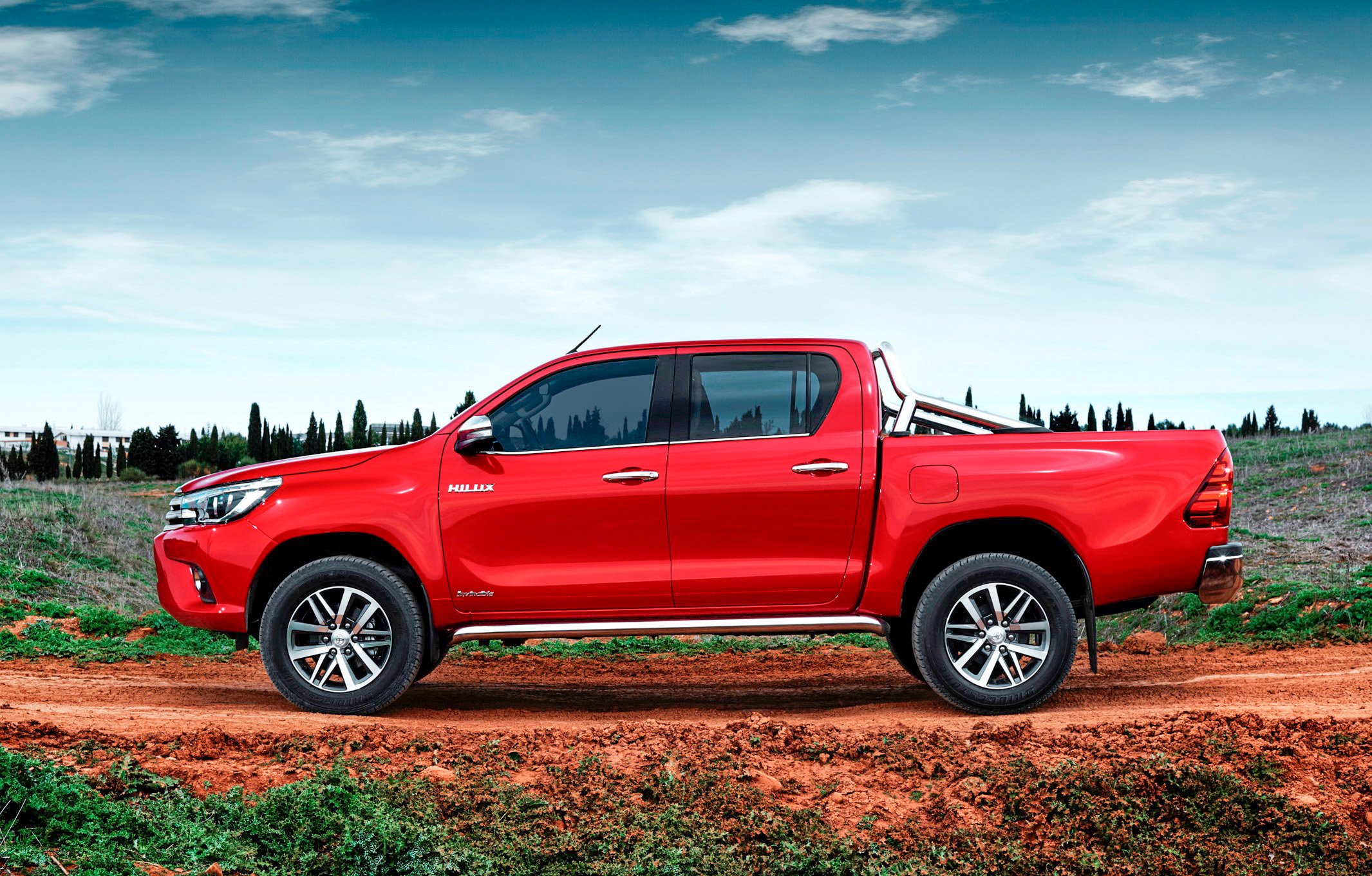 On the move, both the ride and handling impress, despite the fact that Toyota has opted to remain with a traditional leaf-spring arrangement at the rear of the Hilux. Torsional rigidity has increased by 20% compared with the previous version, which contributes to improved road manners and should help its durability. Its leaf-spring setup may not be as comfortable as the independent coil springs of the Nissan NP300 Navara, but the leaves have grown by 10cm in an attempt to negate the impact of bumps and divots. However, the rear does fidget over crusty surfaces, more so when it isn’t weighed down by anything in the load bay.

By pick-up standards, the Hilux’s steering is accurate and nicely weighted, but when cornering with any degree of enthusiasm, you are unceremoniously reminded of the vehicle’s commercial roots; there’s still body sway and not a great deal of grip.

The wing mirrors are large and offer excellent visibility. However, excessive wind whistle from as little as 30 mph was irritating and once you notice it – and you will – it gets in your head and is difficult to ignore. Folding the mirrors on the fly alleviated the din, but negates their raison d’être. The improvements underneath the new Hilux provide excellent off-road articulation capabilities. It is equipped with a switchable all-wheel drive system featuring a high and low-ratio transfer case and both front and rear locking limited-slip differentials. The front differential now features an oil temperature sensor which automatically deactivates the all-wheel-drive system to prevent overheating while in 4WD mode. All the below deck tech makes the new Hilux very capable off-road and further technical aids like hill decent control means that it excels at navigating over challenging terrain.

The improved low and medium speed torque delivery of the 2.4-litre diesel engine and the increased strength of the redesigned ladder-frame chassis together enable an increase in towing capacity to 3.5 tonnes. With three different body styles and four trim levels from which to choose, there should be enough variety in the new Hilux range to suit most on and off-road requirements. It is better to drive on- and off-road than before, is competitively priced next to its rivals and – for the first time – benefits from the longer five-year/100,000-mile warranty. With a hard-fought reputation for solid graft and reliability, the new Hilux deserves its continued success.

Toyota has announced a suite of updates for its 2020 Toyota Hilux...