Toyota pulled the covers off its refreshed C-HR crossover at a special event in Plano, Texas in early October. Sales are now open and first deliveries are expected in January, 2020. We were in Cascais, Portugal earlier this month for its EU/UK media launch and filed this report…

Where do the years go? Seemingly, before you can say ‘Fake News’ (sorry) or ‘Brexit’ (really sorry), you realise that the Toyota C-HR is already three years old. It still looks like the production-ready concept car that surprised everyone with its chiselled, Lexus-like body work and slinky interior at its first reveal in Geneva back in 2016.

In Europe and the UK, it has proved a phenomenal sales success for Toyota, racking up sales of over 400,000 units since its introduction into the lucrative coupe-crossover market. Little wonder then, that as part of its mid-life update, Toyota hasn’t rocked the styling boat too much. 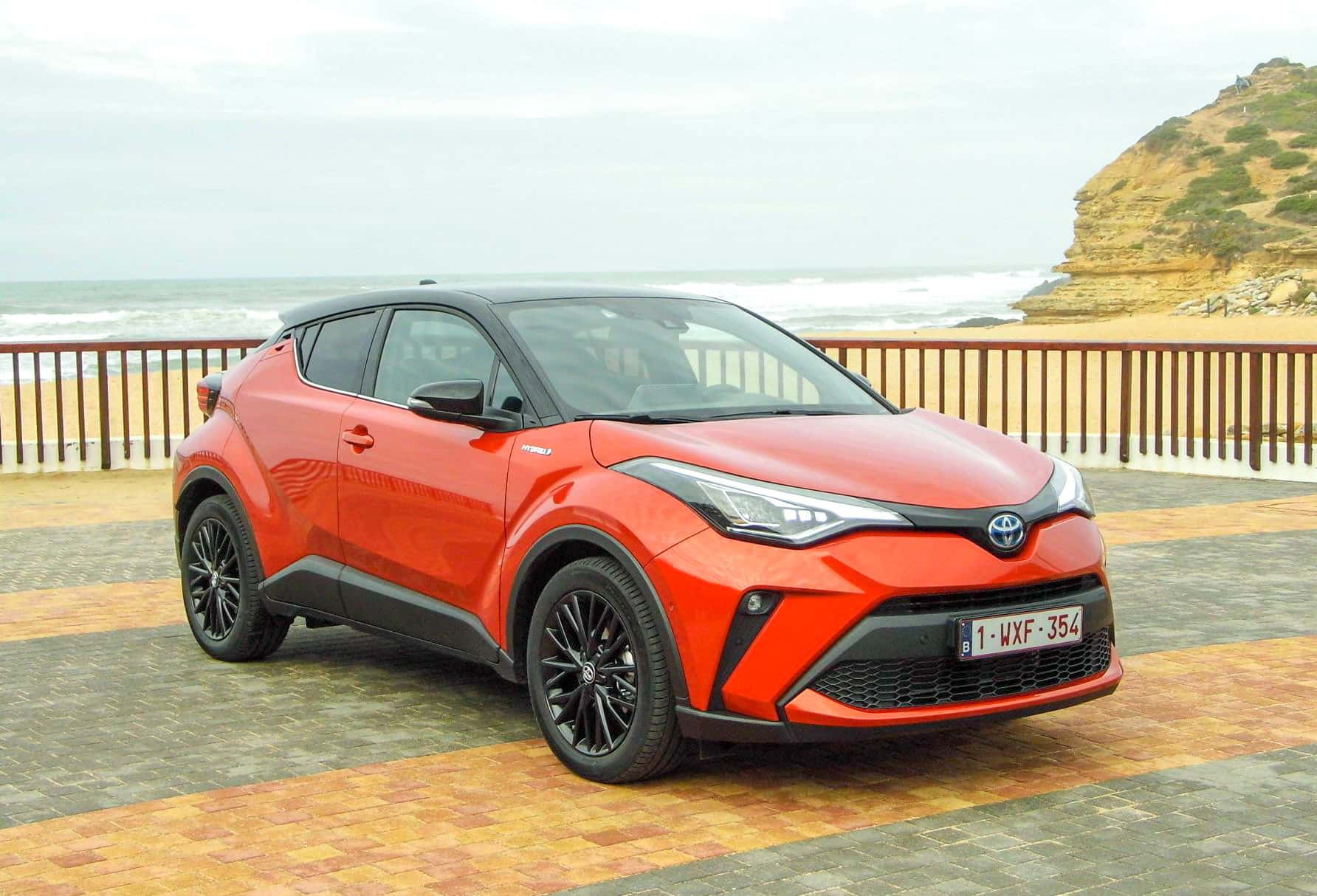 Exterior tweaks to the C-HR were largely based on customer feedback and the usual tick-list for a mid-life refresh has been followed. The creases and sharp lines of the outgoing model have been softened somewhat and the overall effect looks a lot less busy, appearing smarter and more appealing, while retaining the majority of its original wackiness that surprised back in 2016.

Looking sportier than before, there are repositioned fog lamps, new standard-fit LED light clusters (with the rear actively scrolling), along with a larger grille/bumper which now has a painted bottom lip which makes it look a little lower to the ground and the rear LED lights are connected by a smart gloss black spoiler. 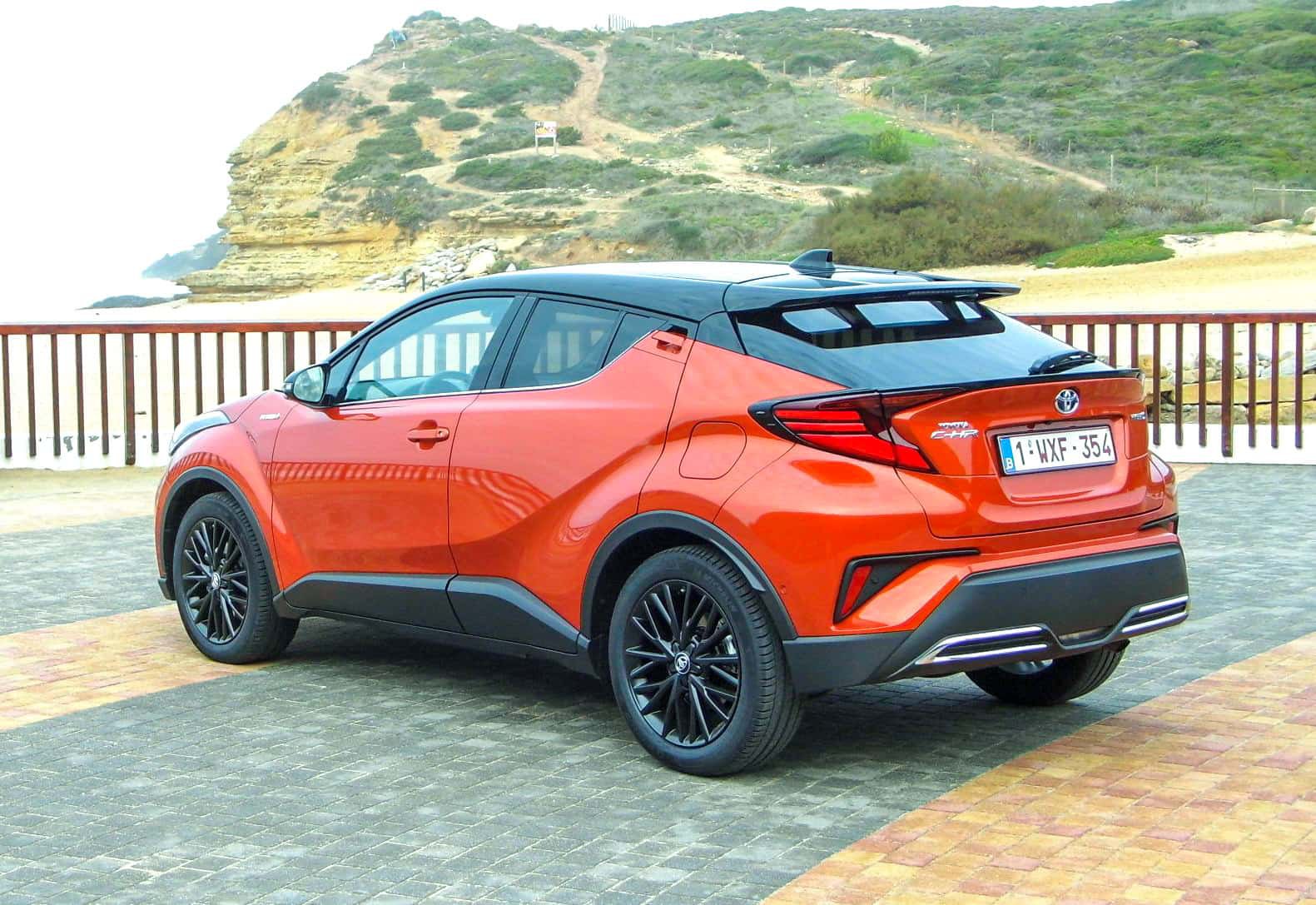 The special Orange Edition shown in the pictures is fitted with the new 2.0-litre Hybrid powertrain and just 500 examples are bound for the UK market. Inside, new higher grade materials adorn the top of the dash and the inside of the doors. It’s all mostly grey and black, but there are plenty of curves, textures and surfaces to keep things interesting.

The C-HR still doesn't feel quite as plush inside as the Peugeot 3008. Fortunately, the front seats are far more comfortable as they now feature extra base and side bolstering. There’s a reasonable amount of space in the back, but the doors aren’t huge, the windows are small and it all feels a little claustrophobic back there. Up front it’s all quite nice and cosy for a sizeable crossover. The most welcome change is the introduction of Apple CarPlay and Android Auto. These allow you to operate your favourite smartphone apps through the car’s touchscreen and bypass Toyota's own infotainment and navigation software, which remains lethargic and distracting to use, despite an upgrade which includes function buttons either side of the screen. Boot space with all seats in place is 377 litres and, with row two flattened a useful 1,160 litres becomes available. There are four regular trim grades available on the 2020 C-HR: Icon, Design Excel and Dynamic, plus the top-spec Orange Edition which is limited to just 500 units for the UK.

Step up from Icon to Design trim for navigation and keyless go, 18-inch wheels (17-inch on the Icon), park assist, front and rear parking sensors and voice recognition. Depending on trim level, the dashboard contains contrasting inserts – in grey on Icon, silver with Excel or a classy blue on Dynamic models.

Since the C-HR first arrived back in 2016, we’ve had the modestly-powered 114hp 1.2-litre turbocharged engine in the line-up, along with the 120hp 1.8-litre hybrid powertrain paired with a CVT ‘gearbox’.

For its 2020 model year, Toyota UK has dropped the petrol only 1.2T and continues to offer the 1.8-litre hybrid which has had its eco performance enhanced by an upgrade to a lithium-ion high-voltage battery and by size, weight and efficiency improvements in all its principal hybrid components. To reinforce Toyota UK’s commitment to hybrid power is the introduction to the refreshed C-HR of a completely new 2.0-litre ‘Dynamic Force’ hybrid unit offering a world’s first 41 per cent thermal efficiency and a compression ratio of 14.0:1, which is firmly in diesel territory. It is the fourth-generation hybrid powertrain from Toyota, Japan.

It combines a petrol engine and electric motor to produce 184hp, yet is more efficient than and dynamically superior to the 1.8-litre system. Although power is greater by a whopping 50 per cent, fuel consumption is only 10 per cent higher. CO2 emissions are unrivalled in its segment, starting from 118g/km and combined cycle fuel economy is a claimed 53.3mpg.

Transmissions for both 1.8 and 2.0 hybrids are via a CVT.

Built on Toyota’s GA-C platform (along with the Prius, Corolla and Lexus UX), the updated C-HR has received upgrades to its body shell to increase rigidity, along with comprehensive NVH (noise, vibration and harshness) reduction measures for a quieter, more comfortable in-cabin experience. The only engine available to test drive at its media launch event in Portugal last week was the new 2.0-litre hybrid unit, fitted to the top-spec ‘Orange Edition’ cars. The extra power of the 2.0-litre unit now makes full use of the car’s excellent chassis.

Underneath the new C-HR, the suspension has been re-tweaked which brings improved ride and handling, along with a modified electronic power steering unit to improve steering feel. Underway, those technical enhancements do much to improve the car’s driver-centric dynamics.

Overall refinement is also noticeably improved and – like the new Corolla range – is very impressive. The combination of hybrid engine and CVT transmission is one of the best yet in terms of noise and responsiveness – this from someone who has always disliked CVT transmissions.

Unlike many CVTs before it, the new transmission isn’t coarse, nor is it audibly intrusive and it’s only noticeable if you actually stomp on the accelerator. Most drivers won’t, of course and this version builds speed with pleasing pace that doesn’t leave you hanging or frequently checking your watch.

However, if you’re the type of driver to frequently drive with a heavier right foot, the C-HR is unlikely to be on your radar, anyway. Compared to the outgoing C-HR models, the new 2.0-litre power plant is a most welcome addition. The 2020 C-HR features all the standard safety kit Toyota can muster – which is a lot. It includes as standard the company’s own ‘Safety Sense’ suite, which brings together adaptive cruise control and autonomous emergency braking along with pedestrian detection. Lane-departure warning, auto-dipping headlights and road-sign recognition are also featured.

The C-HR scored a reassuring five out of five stars in Euro NCAP crash-testing, back in March 2017. Seven airbags are provided and stability control is included on all models. The Excel and Dynamic models can also be optionally specified with rear cross-traffic alert and blind-spot monitoring to further enhance safety. There is little doubt that Toyota’s refreshed C-HR will remain an interesting alternative to all the usual suspects in the growing crossover segment.

It looks as fresh as the day it was revealed nearly four years ago, has an interesting interior that’s well-made and now of higher quality, drives very well and the new 2.0-litre hybrid setup is more efficient and cheaper to run than anything Toyota has produced.

Admittedly, it’s not the go-to for practicality, but the addition of key connectivity equipment and a more powerful hybrid motor make it a far more appealing proposition than the 400,000 cars sold before it.