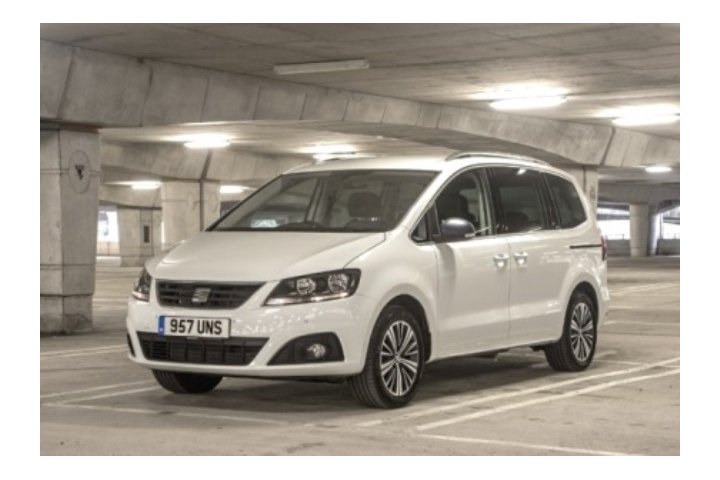 SEAT Alhambra: An MPV for the smart money

Those currently in the market for a seven-seater are very spoilt for choice, but most of those choices now lie in the SUV sector.

Far more popular in the late nineties and early noughties, the range of traditional seven-seat MPVs now on sale in the UK is significantly reduced. 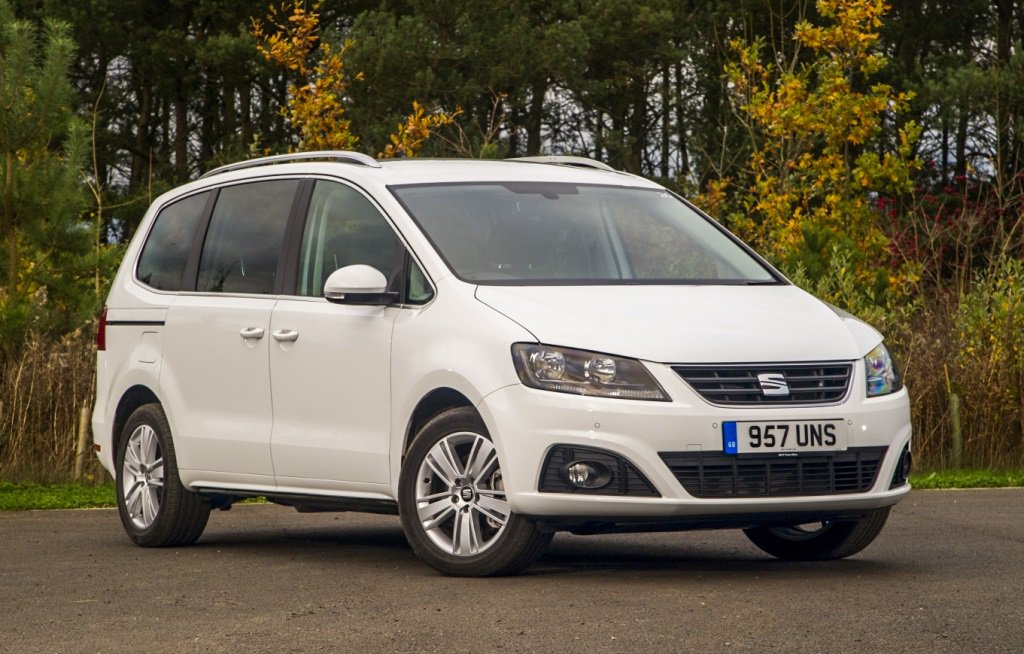 The SEAT Alhambra and the closely related Volkswagen Sharan are two of the remaining stalwarts. Both made for people-carrying duties and share pretty identical underpinnings and engineering technology. Of course, there’s no denying the allure of the VW brand, but it’s the Spaniard that sports a more budget-friendly price tag.

The big family car market has changed dramatically over the past five years and rather unsurprisingly, there is chatter that SEAT is to discontinue the Alhambra. Some say this current iteration is to be the last – its replacement being the new seven-seat Tarraco SUV (feign surprise here) due for UK arrival in January, 2019. 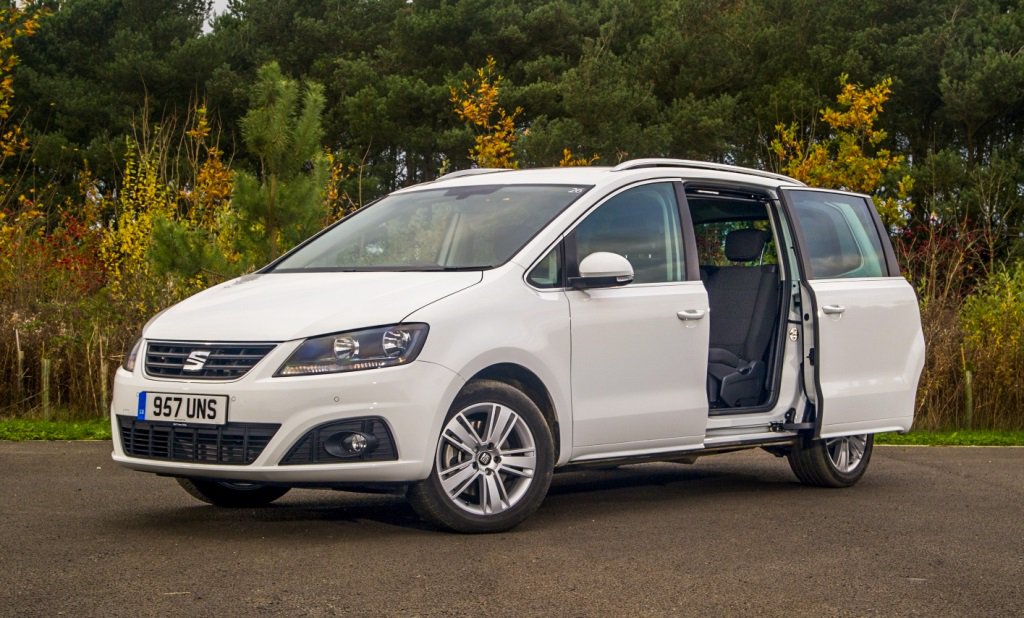 Should that be the case, then now may be a good time to take a closer look at one of the UK’s all-time favourite MPVs…

Showing its age of late, it would be unkind to dismiss the Alhambra as being unattractive, but as a one-box family shifter, it isn’t especially stylish looking. Launched in 2010, this second-generation Alhambra was updated in 2016 with new lights front and rear, a new grille and some minor trim details, but it essentially looks the same as before. 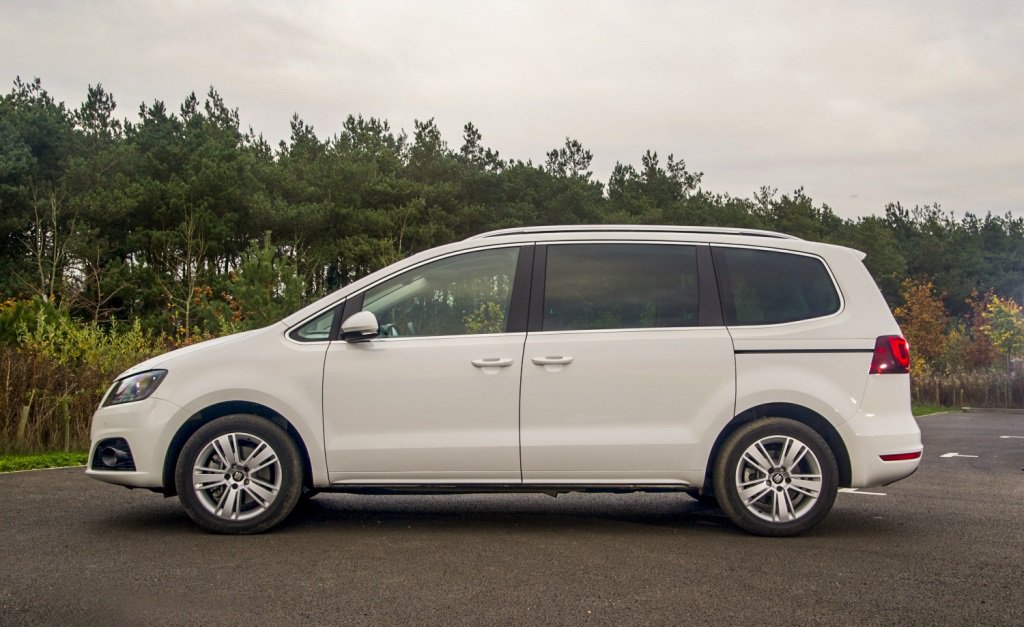 Of course, that image may be lacking in intrinsic appeal, but when you’re dealing with the needs of a large family there’s still little to beat the SEAT Alhambra which elevates its desirability somewhat. It’s a very rational car, one you acquire because you need it and not necessarily because you desire it.

Inside, the Alhambra offers family-oriented practicality and appears durable, tough and hard-wearing to cope with full-on family duties.

With an unfussy layout, big buttons and large, clear dials, the Alhambra’s dashboard quickly becomes user-friendly. There are pleasant soft-touch materials on top of the dashboard and the plastics used throughout the interior border on Audi quality. 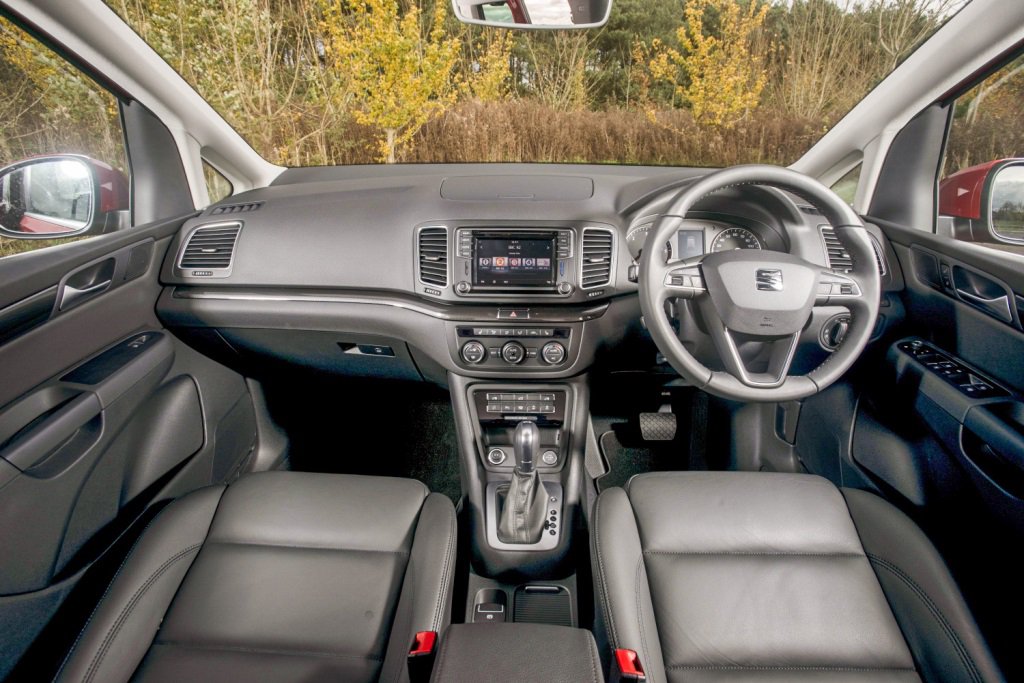 Unlike EU models, all SEAT Alhambra’s sold in the UK are seven-seaters. There are three rows of seats in a 2-3-2 configuration, with the rear-most pair folded flat into the boot floor and easily accessible when required. Unlike many rivals, they are proper, full-size seats and should take most sizes of person in reasonable comfort over reasonable distances.

The middle row consists of three individual seats, each able to be tumble-folded or slid forwards and backwards in order to maximise the space on offer. Also handy are the Alhambra’s sliding side doors introduced on this second generation in 2010 – something never made available on other MPVs, including Ford’s Galaxy and S-Max. 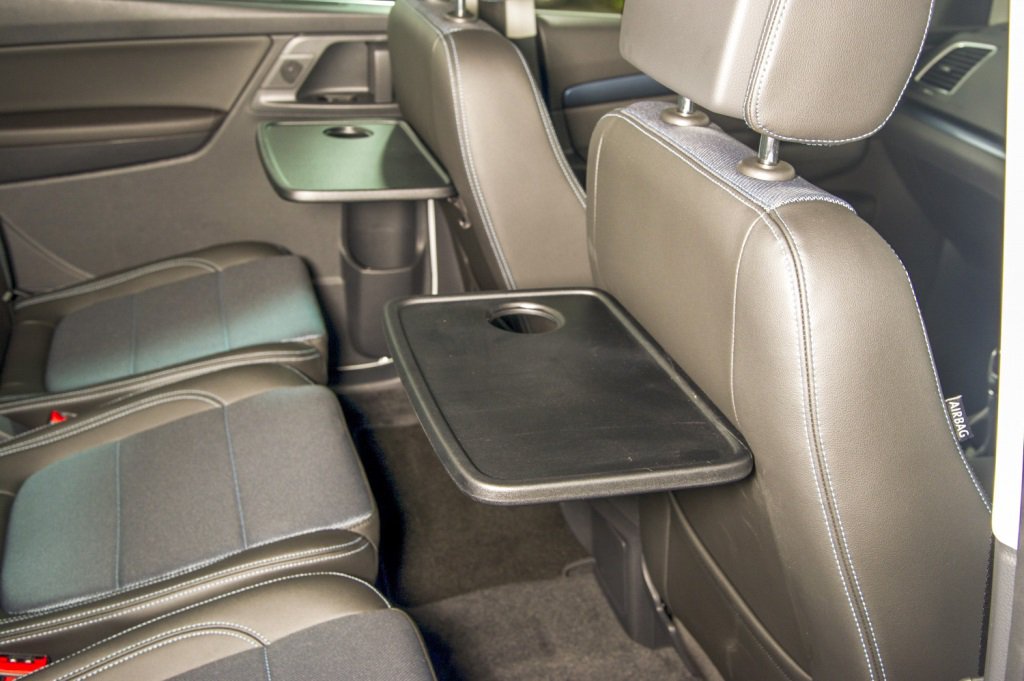 If you’re fitting child seats, all three second-row seats have ISOFIX mounting points, while the fact that you can offset the seats gives you extra flexibility if you’re fitting more than one child seat or booster.

As you’d expect from a class-leading MPV, there’s also lots of storage for everyday bits and bobs. The front armrest has a cubby area underneath, while in SE trim and above, the Alhambra gets covered storage compartments in the second-row floor and a lidded oddment tray on top of the dashboard.

With all the Alhambra’s furniture in place, there is just 267 litres of load area (making the SEAT roof-top box accessory a distinct possibility). Flatten row three and 658 litres becomes available, while lowering both rows expands the cargo capacity to a cavernous 2,297 litres. With a wide opening, flat floor and low load lip, it’s a really useful space for those occasional Ikea or local skip runs. 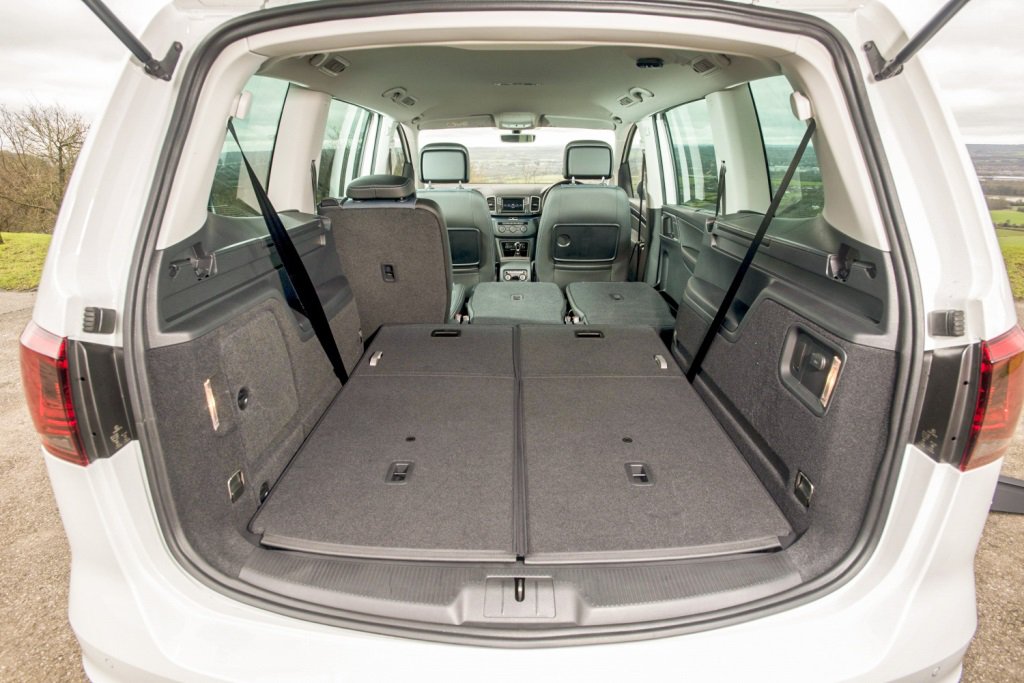 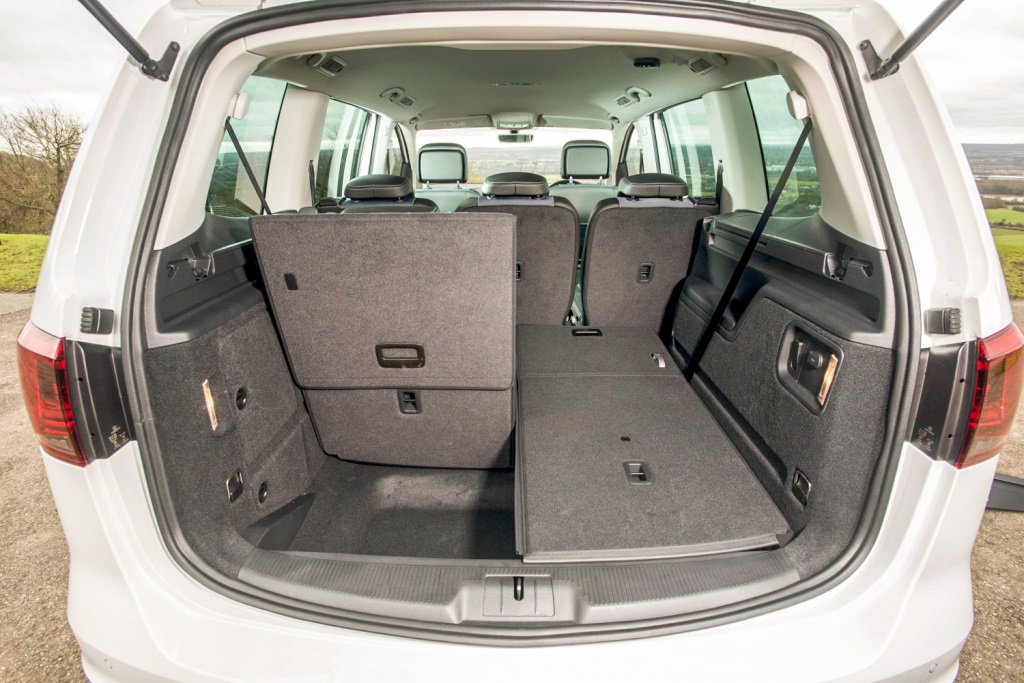 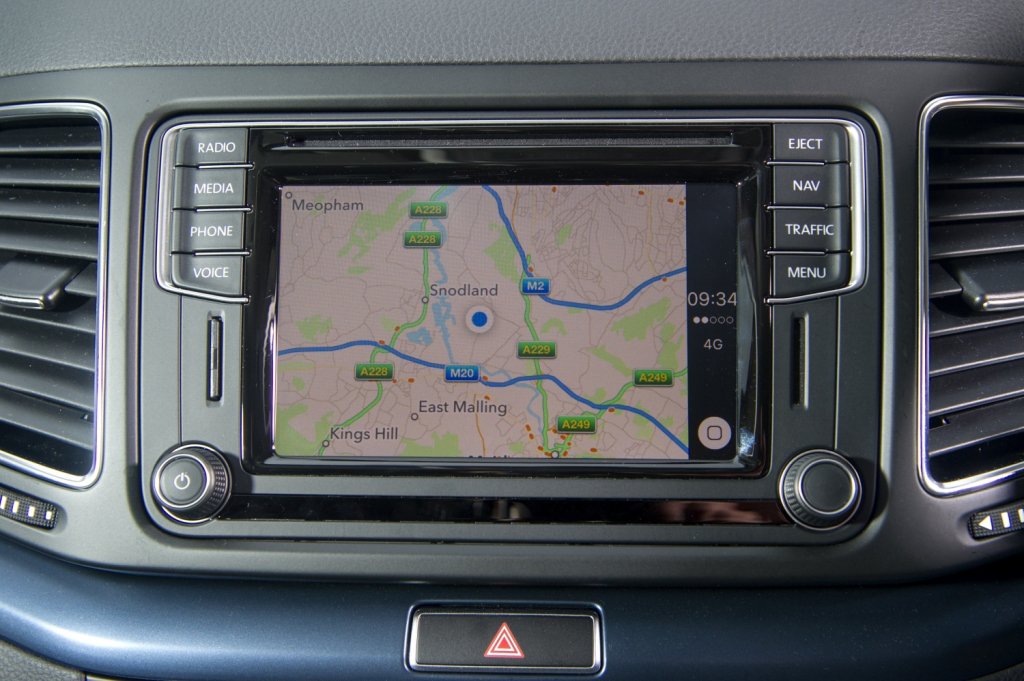 Top-spec Xcellence adds luxury items like satnav, a powered tailgate, an opening panoramic sunroof, leather upholstery with heated front seats, a reversing camera and heated windscreen washers. There are also larger 17-inch alloy wheels so it drives and rides slightly differently than the S and SE. 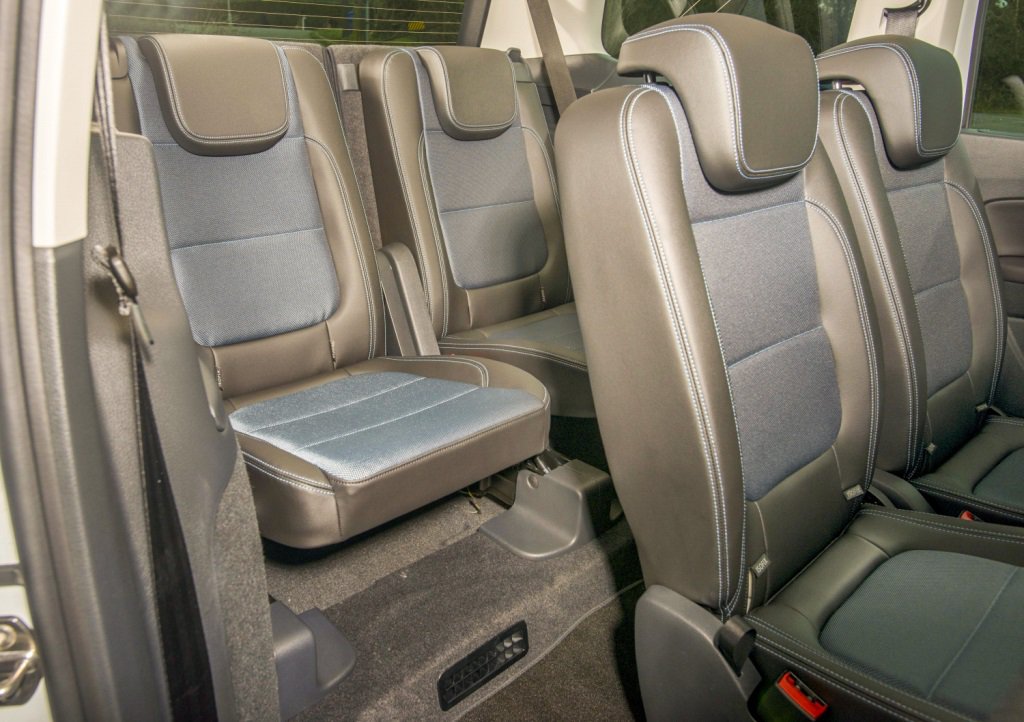 An ingenious option that’s available on all models is an integrated child’s booster seat that lifts up out of the seat base and may be fitted to one or both of the outer second-row seats.

As if further evidence is needed that the Alhambra’s days are numbered, current engine options have been reduced to just one – but fortunately it is the one that has been the most popular choice of recent years – a 2.0-litre Ecomotive turbo-diesel that offers a strong 148hp and punchy 340Nm of output.

It is available paired with either a six-speed manual or DSG dual-clutch automatic gearbox. The manual has a precise shift action and the clutch pedal isn't too heavy. But for ease of use – especially around town – the DSG as tested takes some beating. Leave it in auto mode and it drives like any other automatic (and better than many), or you can shift manually using either the ‘manumatic’ gear lever or flappies mounted on the steering wheel. 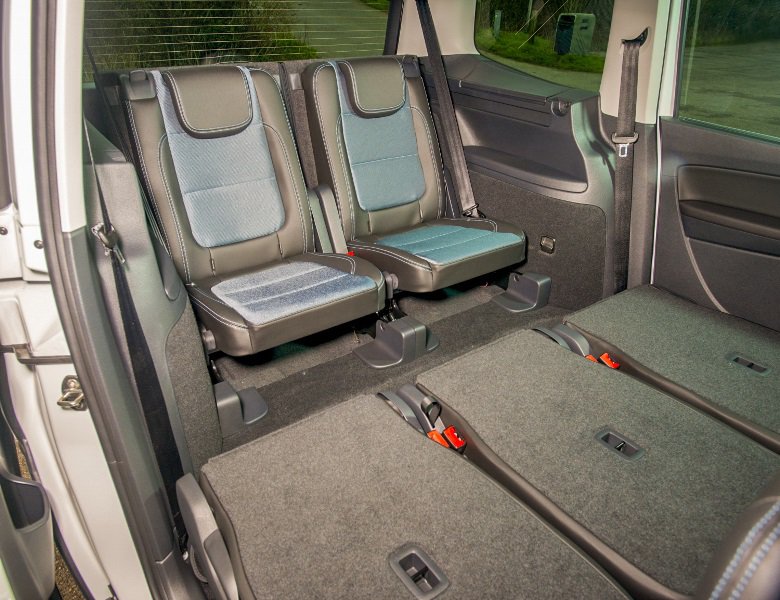 There is very little between the gearboxes when it comes to emissions and economy. The oil-burner has an official combined economy of 56.5mpg and emissions of 130g/km if you opt for the easy to use manual transmission.

Economy drops slightly to 54.3mpg and emissions rise to 136g/km if you choose the DSG automatic, but it’s a small penalty for the added convenience – it makes the Alhambra quite effortless to drive particularly in an urban environment, thanks in part to that flexible 340Nm torque output available from a lowly 1,750rpm. 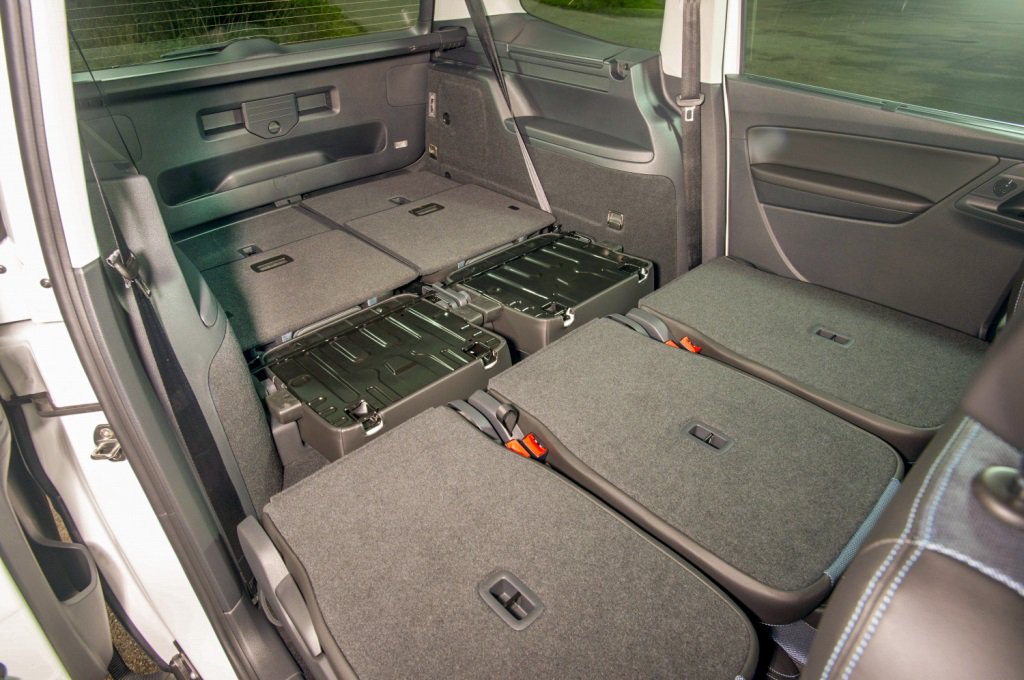 As you would expect of a family-oriented MPV, the Alhambra scored the maximum five stars in Euro NCAP crash-tests. All models come with a full complement of airbags – including a driver’s knee airbag – as well as electronic stability control and ISOFIX mounting points for child seats. The front passenger airbag can also be disabled to allow the fitting of a rear-facing child seat in the front.

Even the most basic model gets front and rear parking sensors, which is handy for such a big car. All models feature a tiredness recognition system, which detects when you've become fatigued and will alert the driver to take a revitalising break. 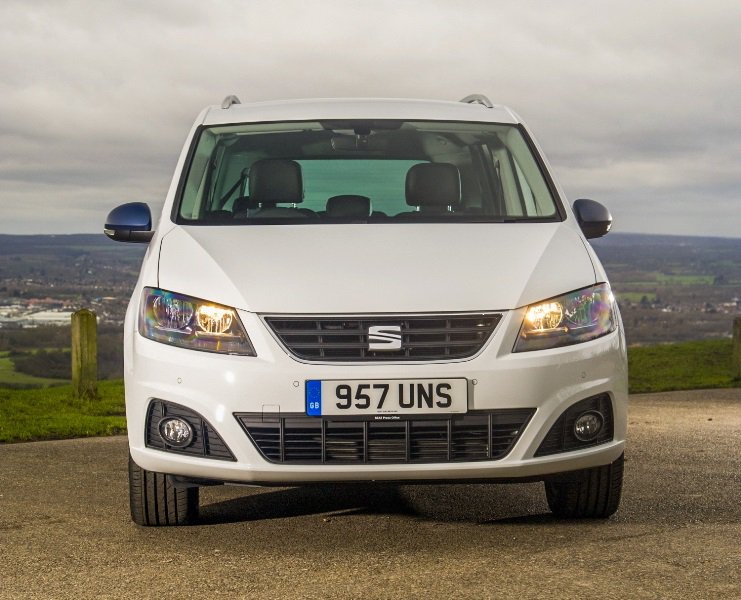 Being the nature of the beast, you don't expect large seven-seater MPVs to be particularly good to drive, but the SEAT Alhambra is actually a very comfortable and surprisingly entertaining car. Its steering is accurate and nicely weighted and, given the car's bulk, there's very little body lean in corners. It also has plenty of grip downstairs and feels very safe and secure on a twisty road. 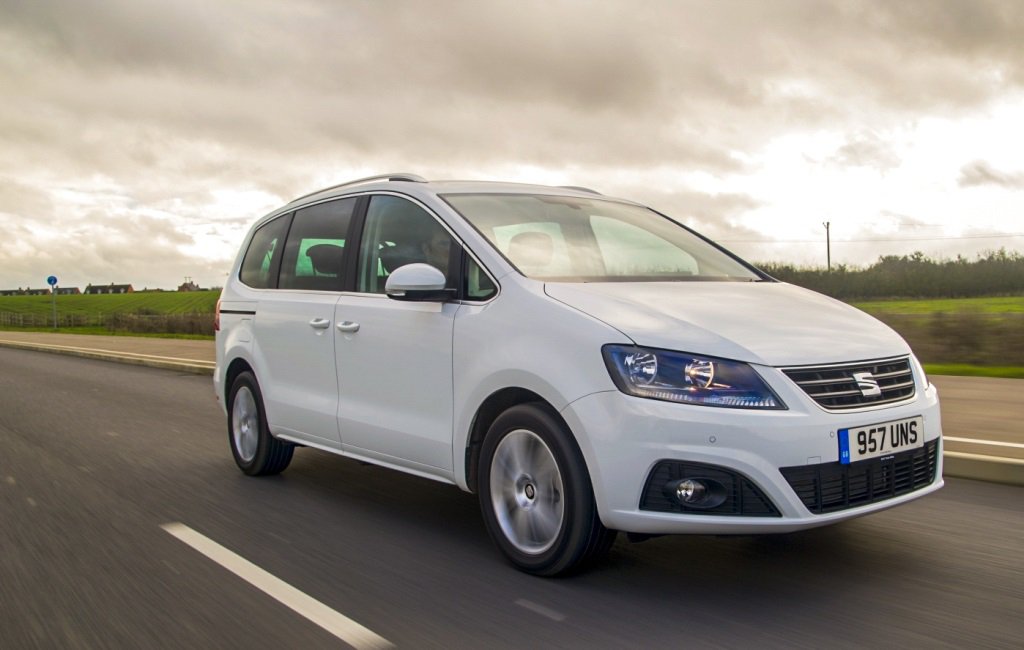 The suspension of the Alhambra majors on comfort and it tackles crusty road surfaces well and absorbs bumps with ease. It is incredibly well insulated with road and wind noise barely audible, while the engine noise from the diesel is also well suppressed.

The SEAT Alhambra is a tough trooper and the more time you spend in it, the more you will appreciate its simple charms. Those sliding side doors show their worth in tight car parks and there’s no beating the high quality of the cabin.

It is effortless and rather pleasant to drive and buyers wanting something ultimately safe, stable and predictable will find little more suitable than this comfortable, award-winning seven-seater – and the kids will love it too. 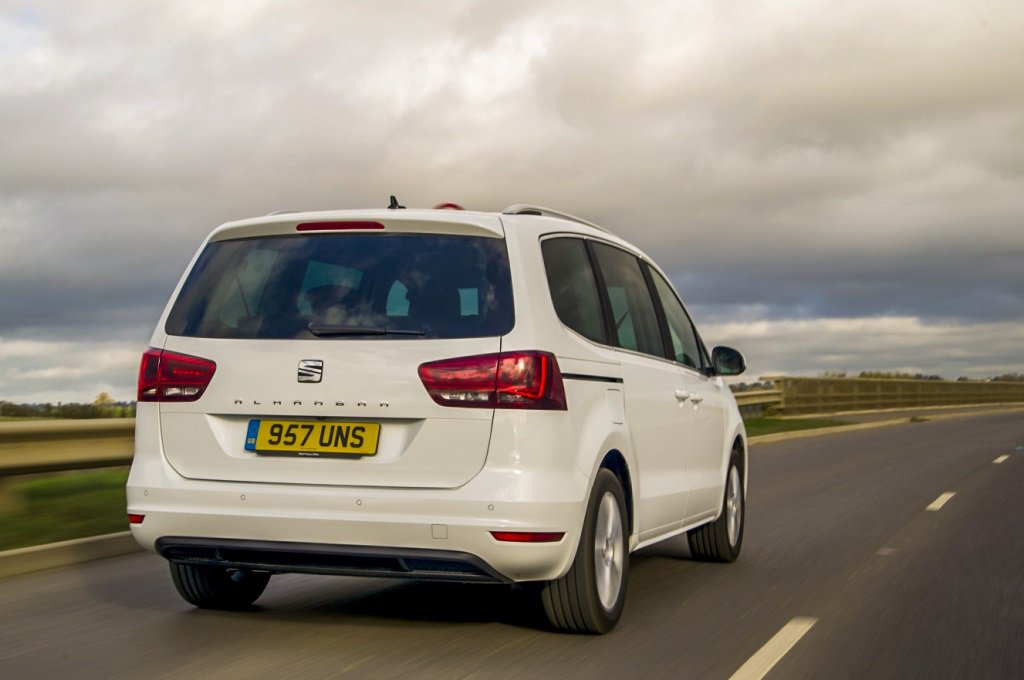