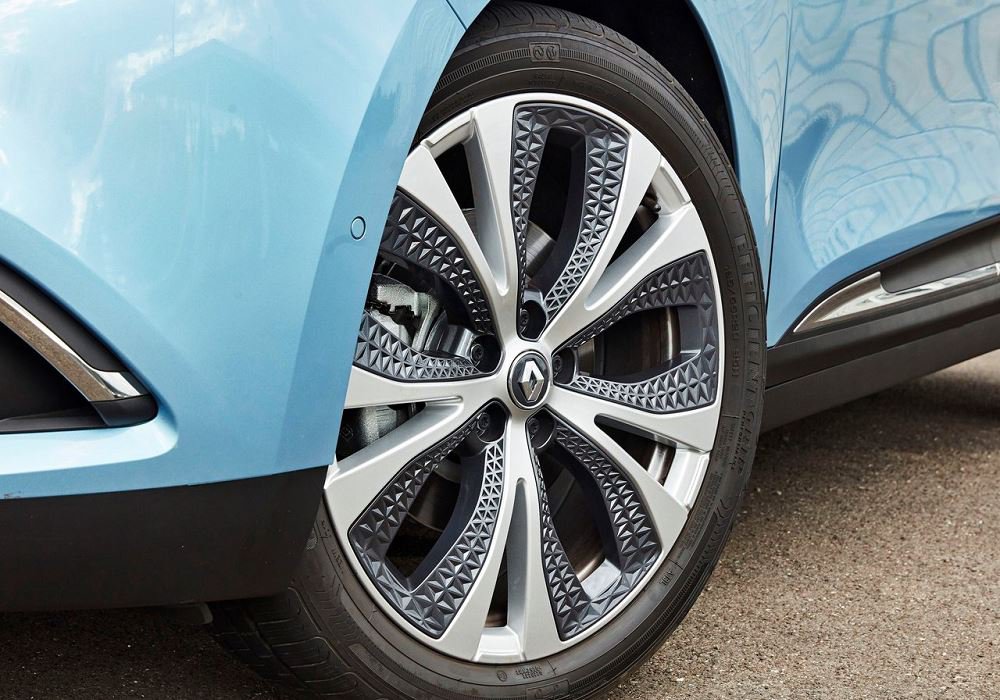 With the glassy Espace of the early 1980s an original trailblazer for the MPV (multi-purpose/passenger vehicle) class, Renault cemented its position in 1996 with the Mégane Scénic. Its clever use of cabin space, imaginative storage solutions and practical, family-oriented touches made it an instant hit – so much so that the car justifiably won the prestigious European Car of the Year award a year later. 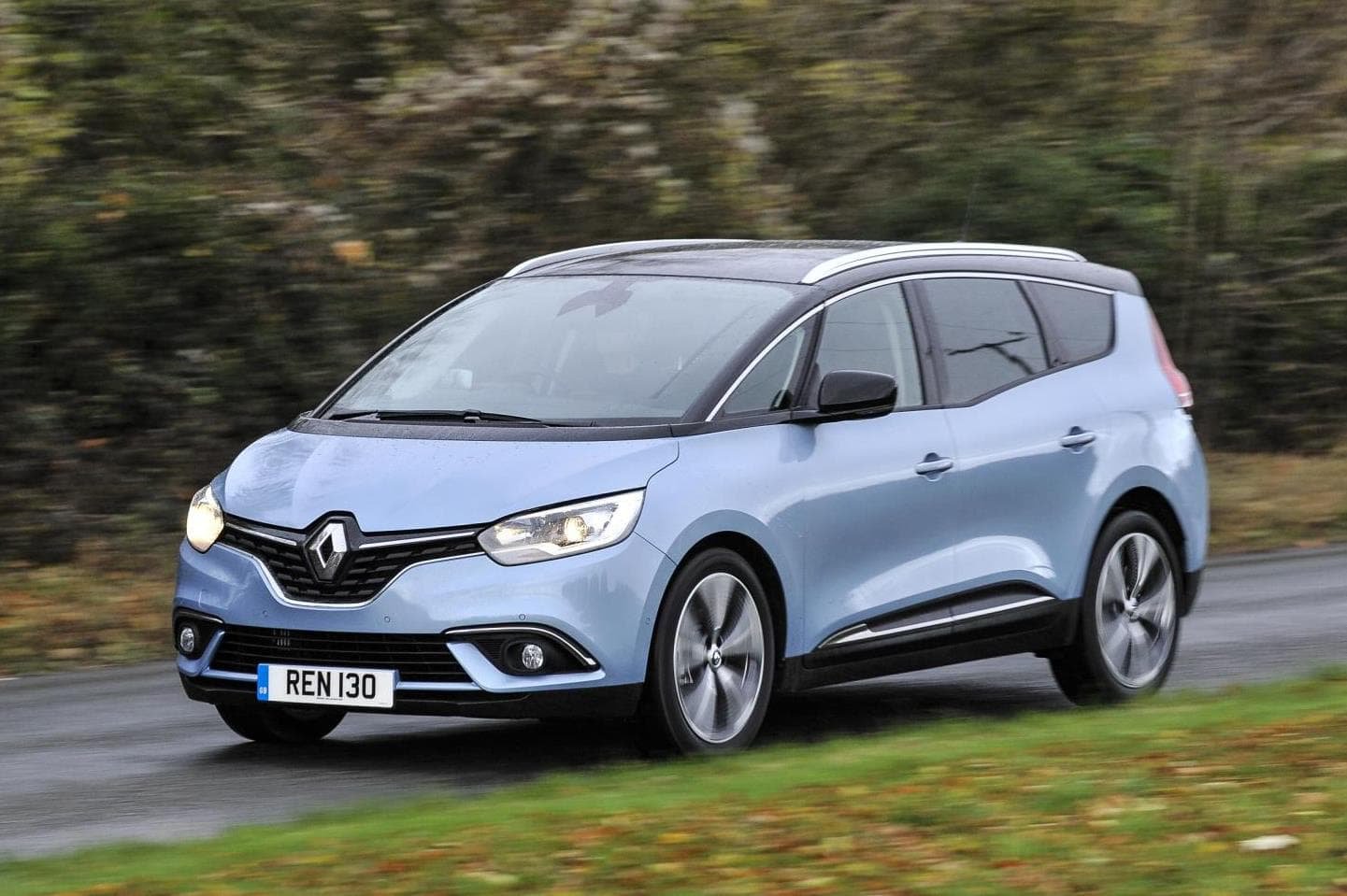 Twenty one years on and the market’s tastes have changed somewhat with an onslaught of SUVs and crossovers. However, the 2017 Renault Grand Scénic is evidence that the modern MPV doesn’t have to sacrifice style and desirability for modern-day practicality. While the sector is losing sales to SUVs, the seven-seat Scénic’s shapely body and crossover design influences give it the potential to rekindle interest in the people carrier. Parked next to other seven-seat rivals such as the Volkswagen Sharan and Ford S-Max, it’s easy to understand why the Renault’s concept-car styling could steal all the attention – particularly as every model in the 2017 line-up sports huge 20-inch alloy wheels as standard. The Grand has a wheelbase 20mm longer than the regular Scénic, which offers more interior space and third row seats that can be raised manually from the flat boot floor, or lowered at the touch of a button on the infotainment screen. With the first two seating rows up, there’s a very useful 596 litres of load space and Renault has also stuffed the cabin with additional cubbies and underfloor hideaways which add a further 63 litres of storage space – ideal for that treasured Teddy or keeping valuables out of sight. It’s a very practical and cleverly thought out interior but not one that is particularly inspiring to look at, especially after having one’s anticipation heightened by the very stylish exterior. Still, the 8.7-inch portrait infotainment screen (available on Dynamique S Nav models and above) does much to brighten things up thanks to its vibrant and detailed graphics. Overall quality is decent with a clean, simple dash design and touch-zone plastics that feel high-quality. However, it fails to match the inspiration of the exterior. 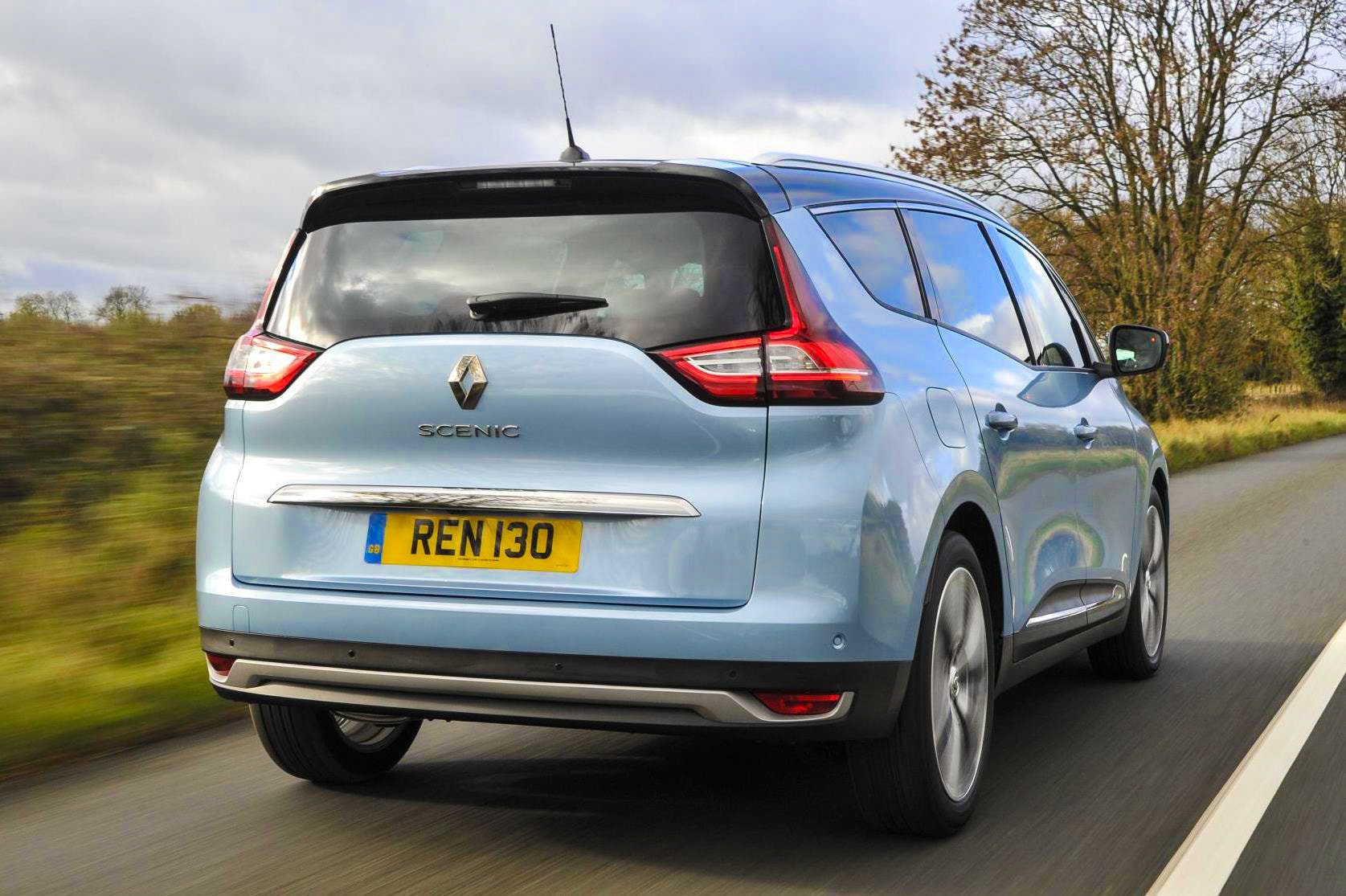 Being the nature of the MPV beast, there is little to get excited about in the engine range. Likely to be the best seller is the 1.5-litre dCi diesel which already plies its trade in the Mégane and Kadjar. My own Kadjar has it and is a smooth runner offering impressive economy, but its performance is far from inspiring. However, it does everything a family needs via a six-speed manual gearbox and if it’s an automatic you’re after, then diesel will be your only choice available.

For shorter urban motoring the 1.2-litre TCe 130 petrol does the job perfectly and is less expensive to buy than the diesel. However, should neither of those engines appeal, you can also choose from two more powerful 1.6-litre diesels and a super-economical diesel-electric hybrid.

The most powerful 1.6-litre dCi 160 engine is only available with a six-speed dual-clutch automatic gearbox. Driven sensibly, it shifts smoothly but it is hesitant to kick down when you want to press on. As with most modern automatics, you can change gears manually, but again the gearbox is lazy and slow to respond to your commands. The manual gearboxes do the job well, but feel vague and rubbery. 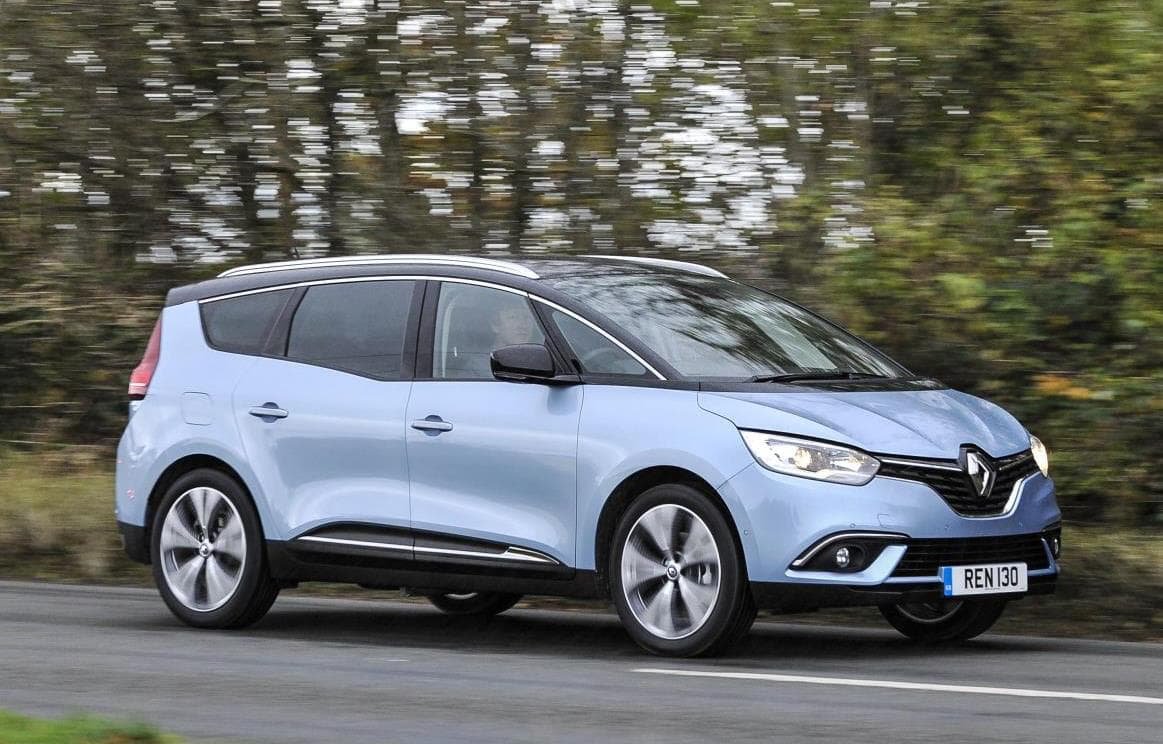 As mentioned, all Renault Grand Scénics come with 20-inch wheels as standard and are far bigger than the norm of ANY class of car in the UK. You would be forgiven to expect them to cause the car to thump and crash over bumps and ruts, but the ride is actually surprisingly comfortable. Yes, you do feel potholed roads and sharp-edged bumps through the base of the seat, but it’s no worse than the majority of rivals with wheels that are an inch or two smaller. This is partially down to taller tyre sidewalls, but also a suspension arrangement that is quite softly set up.

The Grand Scénic leans over noticeably in corners, too. Add precise but numb steering and you get a car that’s pleasant enough to pootle along in at normal speeds, but is devoid of any entertainment value on a winding road.

If only short journeys are regularly required, you may want to avoid the petrol engines; they are thirstier than the diesels and need extra work to produce any pleasurable performance – and, with CO2 emissions of 139g/km – are rather ‘dirty’ and far removed from class-leading. The 1.5-litre diesel is refined once warmed up and on the move, but you may struggle to keep up with traffic if you regularly have a full car. The 1.6-litre units are much stronger but are not quite as refined. 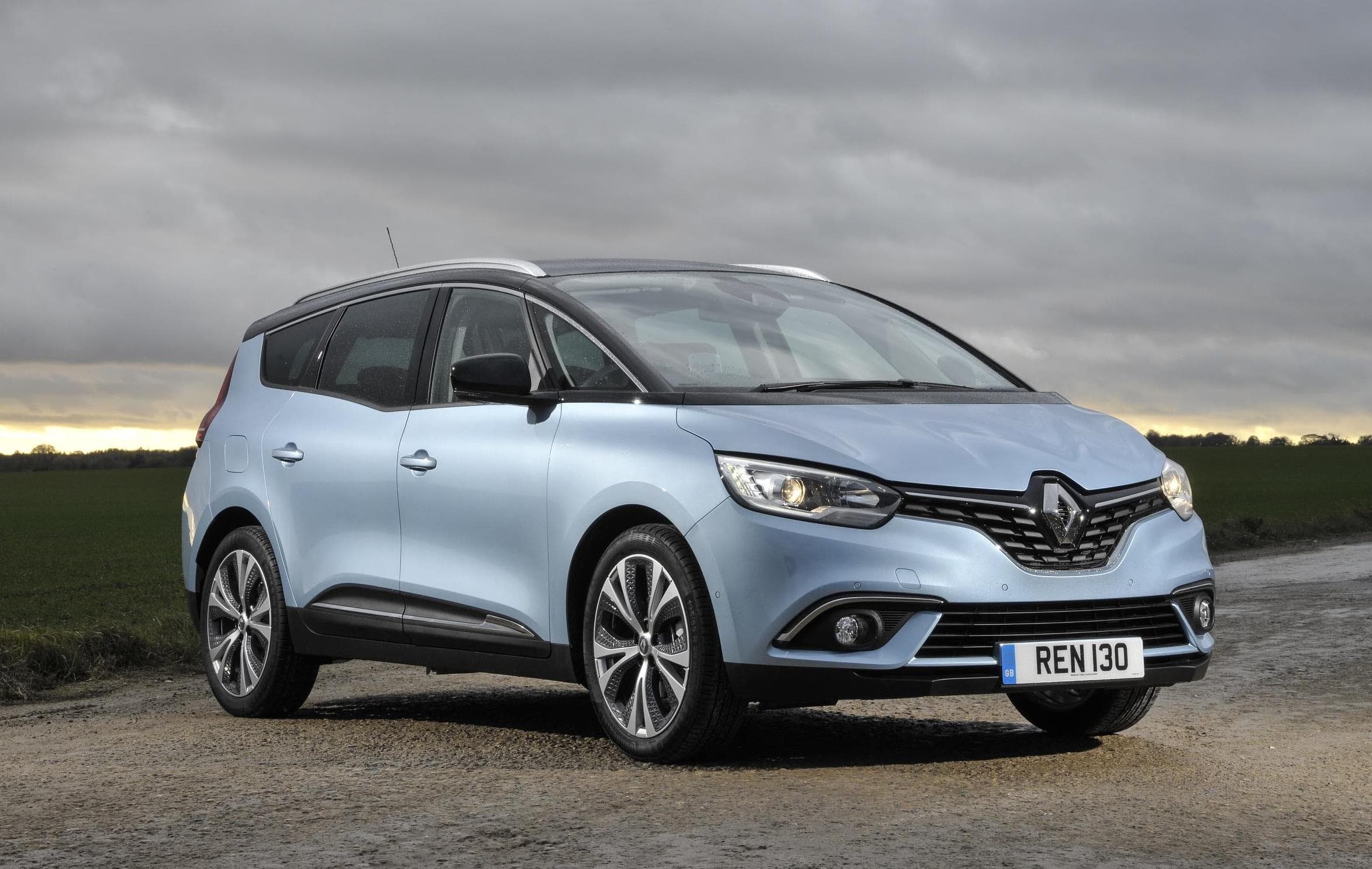 With the Espace no longer available in the UK, this car represents Renault’s most commodious MPV people mover and alongside the regular five-seat Scénic, is available with a suite of petrol or diesel engines and manual or automatic transmission options to suit all needs.

Like the Citroën Grand C4 Picasso and Tesla’s quirky Model X, the 2017 Renault Grand Scénic goes to show that the modern MPV doesn’t have to sacrifice style and desirability in the name of practicality. Sure, the sector is losing sales to SUVs, but the seven-seat Scénic’s shapely body and crossover design influences warrant a rekindled interest in the latter-day people carrier.

Are you looking for a car to take the stress out of shipping the...