You may – or may not – have been aware of the gap between the Evoque and the Sport in the Range Rover line up. Well, Land Rover developed the Velar to fill it and, in doing so, complete its planned portfolio of four luxury SUVs. When Land Rover developed its original Range Rover in the 1960s, the firm wanted to conceal the identity of an early prototype, so derived the name ‘Velar’ from the Latin ‘velare’, which means ‘to hide’. Admittedly, that’s some push of an envelope, but there you go.

It uses Land Rover’s new platform and shares its underpinnings with the Jaguar F-Pace. It’s luxurious and has more off-road capability than most rivals – including the aforementioned Jaguar. Size-wise, the Velar nestles somewhere between the BMW X4 and X6, Merc GLC & E coupés and just above the Audi Q5. The Velar is a slick and very stylish looking car – fluid, fuss free, curvy smooth with barely a crease to be seen. Around the rather bulbous nose, the grille, headlamp clusters and the bumper are so flush you would be forgiven for thinking it was one single body panel.

The test car arrived in HSE trim sporting 21-inch wheels which, on most SUVs, would look ridiculous and severely compromise ride quality. On the Velar they do neither, as the wheels comfortably fill the arches and offer a surprisingly pleasant ride.

An external walkabout reveals lovely details such as the slight LED headlights and the flush-fitting door handles that pop out when you unlock it. It looks dynamic too, with its tapered tail and raked-back windscreen. The Velar is the most aerodynamically efficient Land Rover ever made, with a drag co-efficient of just 0.32.

Overall, the Velar has a look that would stand out at a concept-only motor show and rather rudely suggests a degree of frumpiness in both the Range Rover Sport and full-fat Range Rover above it. Inside, the style continues unabated. The simple horizontal dash employs the company’s all-new TouchPro Duo infotainment system which boasts impressive graphics resolution and functionality that raises the segment bar to new heights. The two 10-inch touchscreens are as elegant as they are clever. When switched off they remain black surfaces, adding to the minimalist ambiance. Turn them on and the panels jump to life displaying crisp, high definition images.

Seated in plush cream-colored leather and surrounded by high-quality materials, the subtle, minimalist ambiance is at once calming as it is exhilarating. 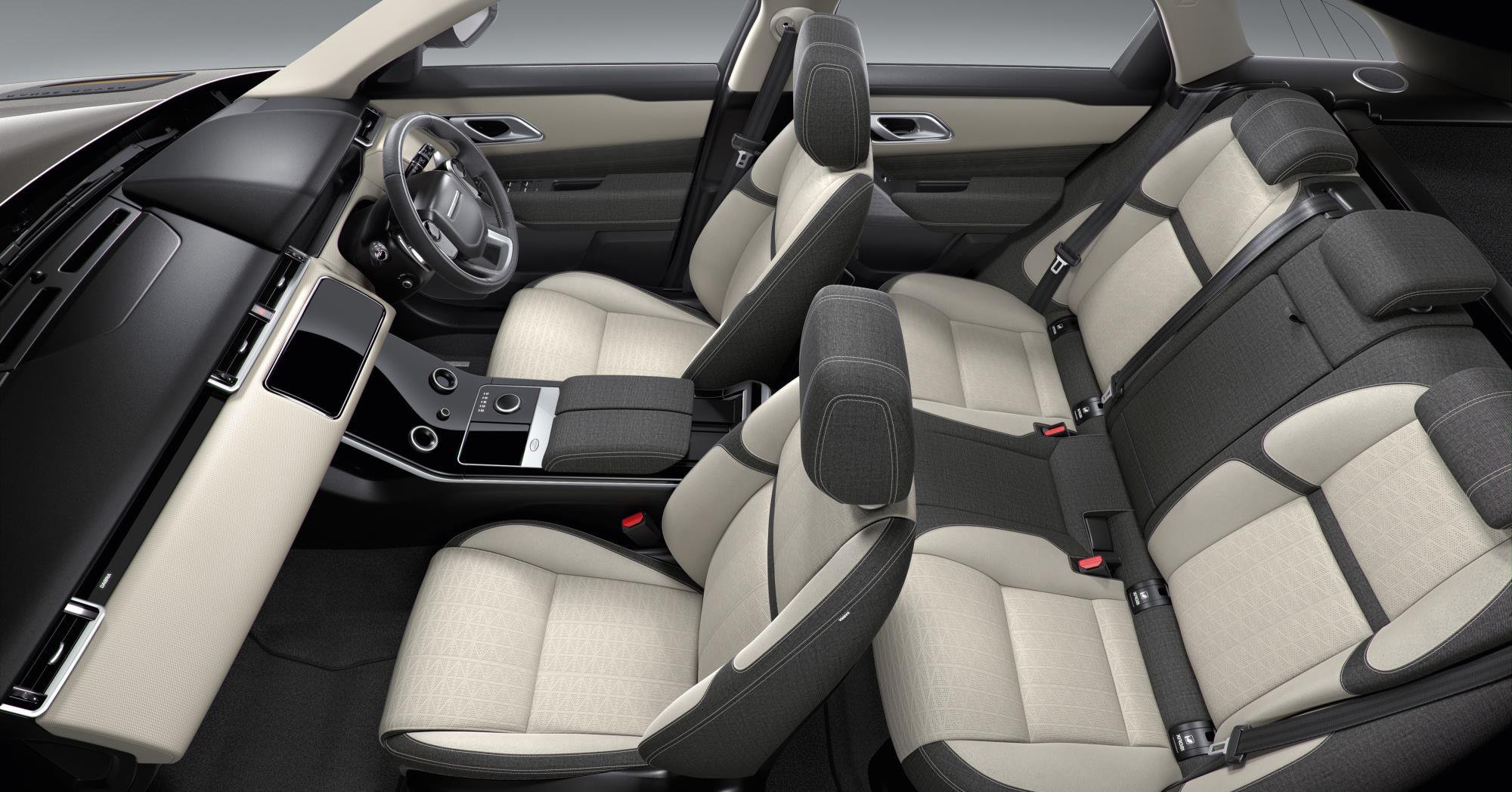 While space in the back seats is a little tight, the boot makes up for it. It’s a good practical shape and the rear seats fold down almost completely flat. There’s 673 litres with row two up and 1,731 litres with the seats down. 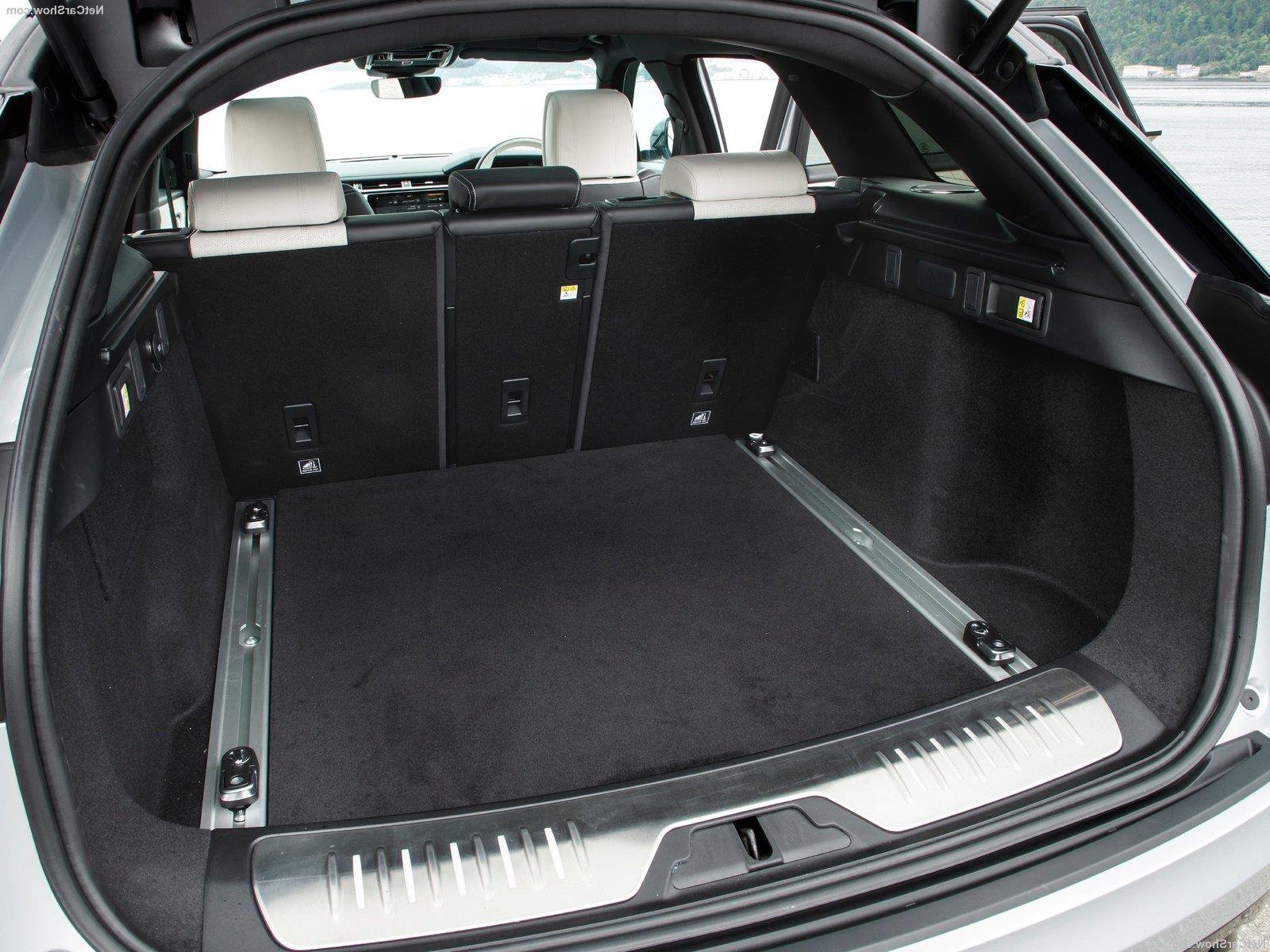 All Velars come with four-wheel drive and an eight-speed automatic gearbox as standard and you can choose from a range of three petrol and three diesel engines.

If most of your driving is destined to be urban, then pick one of the four-cylinder petrol models. These P250 and P300 versions are smoother and quieter than the diesels and will return approximately 34mpg in real-world conditions. There’s a punchy but thirsty P380 V6 petrol model available if you fancy rapid acceleration in your stately SUV, but it’s only available in top-spec HSE models and will rarely return more than 23mpg.

If lots of A-road or motorway miles are your lifestyle, you should really consider one of the diesel models. The twin-turbo, four-cylinder D180 and D240 (as tested) units are the most frugal and should return around 45mpg in normal driving conditions. However, the smoother and more potent V6 D300 will make lighter work of long journeys and return a fair 35mpg doing so. The HSE-spec test car came with a 2.0-litre twin-turbo diesel and had the optional air suspension fitted. Riding on the mid-height setting, the Velar is comfortable and incredibly stable although I did find the accelerator a little stubborn. However, delve into the touchscreen menus and switch everything to the Dynamic setting and the car stiffens, the steering and throttle response sharpen, which is great – just don’t expect sports car performance. Instead, the Velar’s set-up and character suits a long-distance, less frenetic pace – crossing continents at 100mph rather than tackling a switchback road. So, is the Range Rover Velar a case of style over substance? Perhaps, its slippery shape and stunning interior make it very desirable, but it’s the first Range Rover to quite clearly lean more heavily towards form than function. There’s a good selection of engines but the tight rear seat passenger space may be a compromise too far.

Stick to the SE trim with its generous kit list, select the right engine for your work/life balance and – unless you’ve pre-arranged it with your bank manager – stay away from the options list.