The Outlander PHEV is to Mitsubishi what the Qashqai is to Nissan – a golden wonder. The current third-generation Outlander was introduced in late 2013, along with the PHEV variant. The plug-in hybrid is Mitsubishi’s best-selling car of recent years and underwent a major refresh in 2016. The PHEV relies on a pair of electric motors and a petrol engine for its power source and electric regeneration. Remarkably, the Outlander PHEV currently represents around half of all UK sales in the electric/hybrid car market. It boats the lowest CO2 emissions of any all-wheel drive vehicle and it is cleaner (and substantially less expensive) than its more premium PHEV rivals from BMW and Volvo.

The average commute to work is 10 miles, with an all-electric range of 33 miles, you can see why the Outlander PHEV is so appealing being about to make the trip 3 times using zero fuel and emitting zero exhaust pipe emissions.

The Outlander PHEV is not limited to only commuting, it’s a practical SUV too, which is off-road capable for adventurous families. The updates implemented in 2017 were minor but make sense with an enhanced electric-only range (to 33 miles) and making electric-only the priority mode across the range. Once activated, the car operates in EV mode without the engine starting, as long as there’s sufficient charge in the batteries. It also received an electronic parking brake and a brake auto hold button. The dampers were recalibrated to place greater emphasis on refinement and comfort. Charge times have also been improved, with 80 per cent charge now available in 25 mins compared to 30 mins whilst using rapid charging.

As for fuel economy, Mitsubishi has managed to improve the situation by 6.4 per cent, taking the combined figure to a claimed 166mpg, while CO2 emissions were reduced by 1g/km to a paltry 41g/km. 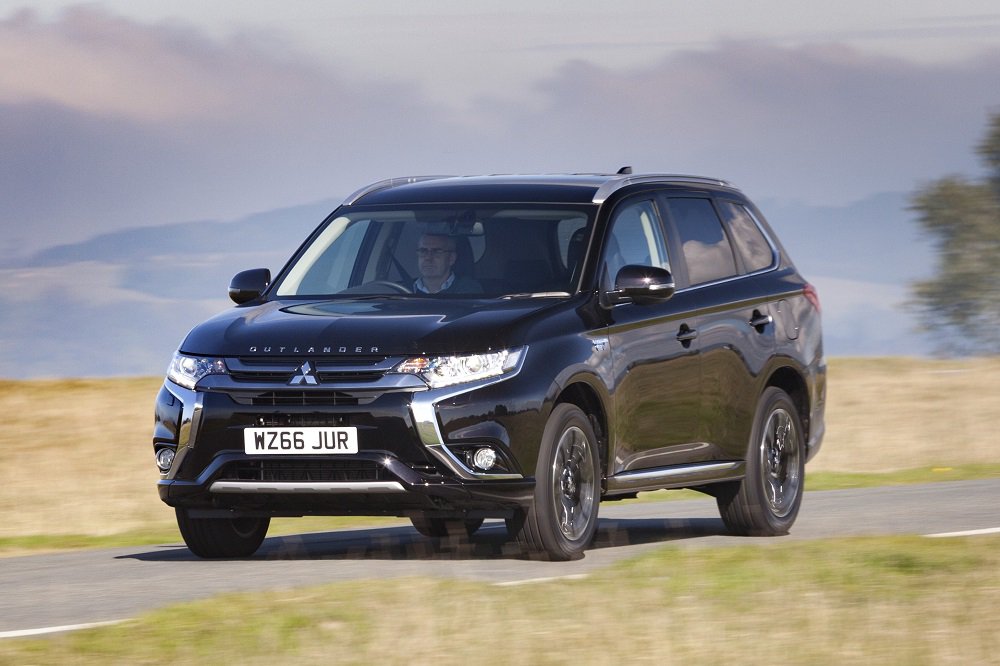 The recent design tweaks give the Outlander PHEV a slightly bolder look, aided by new bumpers that feature matt silver inserts and more aggressive lines. But the Outlander’s profile remains rather slabby, which is what many expect from their SUV.

Other plug-in hybrid offerings in the current market like the KIA Niro, MINI Countryman or the premium Volvo XC90 T8 have all moved on with their exterior styling. The T8 still manages to offer seven seats, unlike the Outlander PHEV’s five because of the batteries under the boot. For seven seats in your Outlander, you’ll have to opt for conventional diesel power 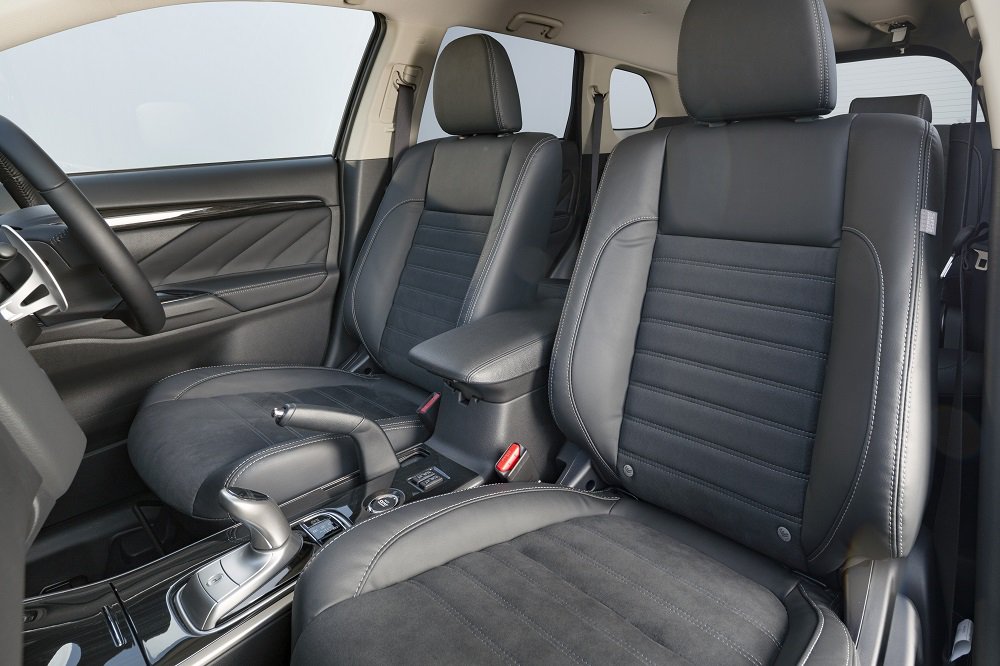 You could mark the PHEV down for having a lacklustre interior that looks dated alongside its rivals, but the flip side is you rarely care too much about chucking in rain-soaked children, a muddy bike or a dog whose favourite pastime appears – at first glance – to be bog snorkelling.

All controls are logically laid out and easy to use. The grey plastic on the dashboard and doors looks pretty uninspiring but most materials in critical touch zones are of reasonable quality. A few glossy black trims on the centre console and above the glovebox do their bit to make the cabin feel a little more upmarket but overall build quality lags behind many current rivals.

Inside, the biggest difference between this plug-in hybrid model and the standard Outlander is the large silver joystick that replaces a conventional gear lever. The redundant rev counter has been dropped in favour of a battery charge readout, too. 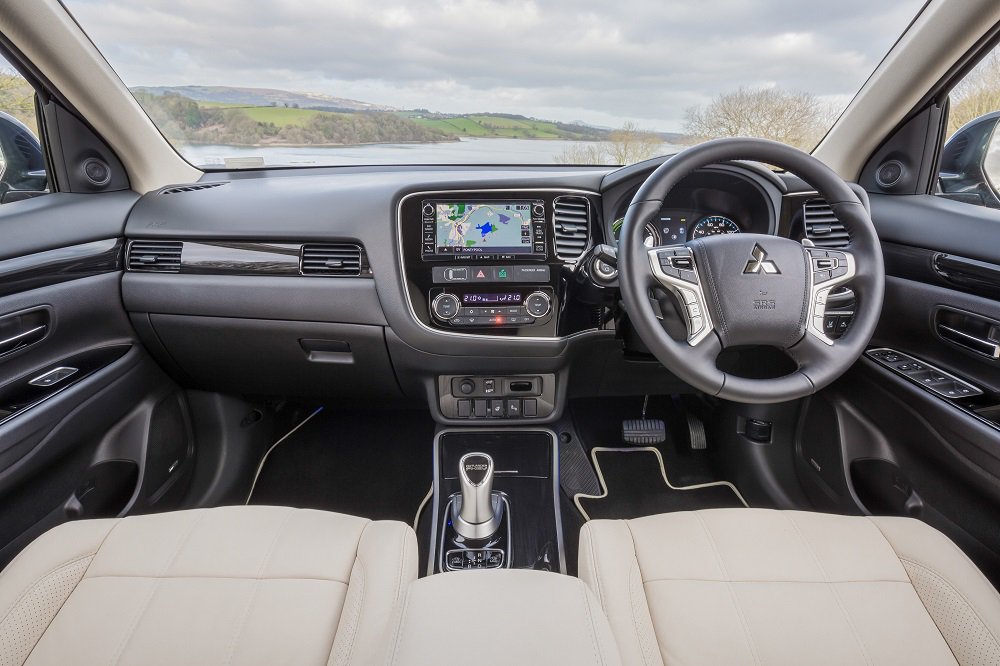 The Outlander’s simple and rather uninspiring shape is a big tick in the practicality box however and the 463-litre boot swallows a lot of daily detritus. Fold the rear seats down in a 60:40 split and you’re left with a 1,602-litre load area.

Head and legroom is generous and at the back there’s enough shoulder room for three adults to sit abreast (although the middlemost may not want to stay there for too long) and the rear seats can recline independently, too. There are six trim grades from which to choose your Outlander PHEV: 3h, Juro, 4h, 4hs, 5h and 5hs. The range-entry 3h ‘poverty-spec’ model is nothing of the sort and offers an inordinate range of equipment for the money. On it, you’ll find 18-inch alloys, hill-start assist, privacy glass, auto lights and wipers, LED DRLs, fog lamps, climate control, cruise control and speed limiter, DAB radio/CD/MP3 player via a six-inch display, Bluetooth phone connection and USB. Now, that’s a lot of kit.

Juro models and above come with a wider range of high-tech goodies, including Apple CarPlay and Android Auto smartphone mirroring systems and a larger seven-inch screen. However, for luxuries such as full-leather furniture, heated/electric seats, electric tailgate, panoramic sunroof and satellite navigation, you’ll need to opt for the mid-range 4h model or higher. The car is powered by two 60kW electric motors to drive the front and rear wheels, as well as a 2.0-litre petrol engine, which collectively bring 148bhp to the party, via three driving modes. Firstly, there is all-electric EV Drive, using power provided by the 12kWh battery, with an official range of 33 miles. Switching between the 3 different driving modes is something you do need to worry about as the car seamlessly switches between the 3 depending on battery charge level and the driving conditions.

Regenerative braking is also a feature on a PHEV which allows the electric motors to top up and charge the batteries under braking or during deceleration. You can alter the strength of the regenerative braking using either the centre joystick or steering wheel paddles – and this is really effective at slowing the Outlander when you’re going downhill.

The adaptive 4WD system also has a lock mode for enhanced performance should a fancy for soft-roading overcome you. Being a plug-in hybrid, there is no gear shifting but rather a seamless transition of power to the road. You can drive without doing anything different to a conventional SUV, thanks to the onboard electro-wizardry.

Ride and handling are not the Outlander PHEV’s strongest areas. Fortunately, under electric power, the Outlander is quick and quiet. The petrol engine doesn’t make itself known too early and there’s plenty of power available. However, when the petrol engine does kick in, it’s quite harsh and doesn’t really add much to the pace, because the PHEV is 200kg heavier than the normal diesel car.

That said the ride is better and body lean is more controlled than the previous iteration and the steering feels sharper and on point. The paddle shifters behind the steering wheel control the amount of electric motor regeneration. For a bit of fun, try using them instead of the brakes. 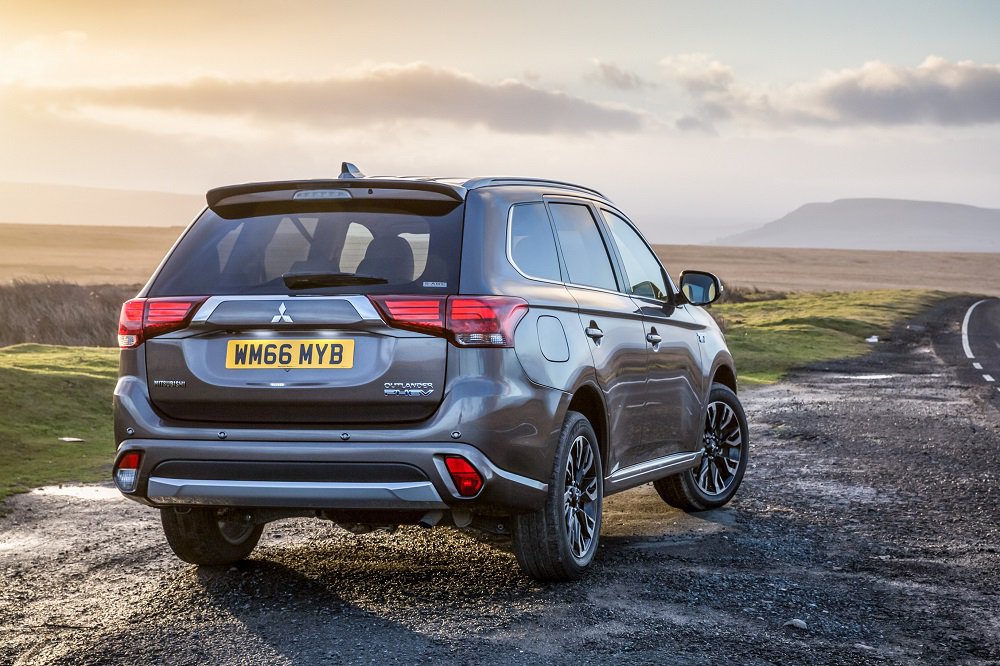 Could the Outlander PHEV be referred to as a game-changer? Peeling its benefits back to basics, it has five doors, four wheels to move about on and a steering wheel to point where you want to go. It has room for people and their stuff and windows to see out of. It has a reasonable, after-market-looking audio system through which Adele may be enjoyed.

No, the Mitsubishi Outlander PHEV doesn’t change the game. What is does is expertly play the same SUV game by a different set of economic rules than most.

The Mitsubishi Outlander Petrol has been updated for 2020, bringing...