Can electrifying the MG ZS transform the compact SUV into a serious EV contender and put the British marque back on the map?

It’s true to say that MG has endured a rather painful rebirth in the UK. Models have come and gone, leaving a slightly negative legacy. Fortunately, those years are becoming an increasingly distant memory.

A decade on, the brand now has a small but competitive range of cars in the popular 3 hatchback, the compact ZS and larger HS SUVs. 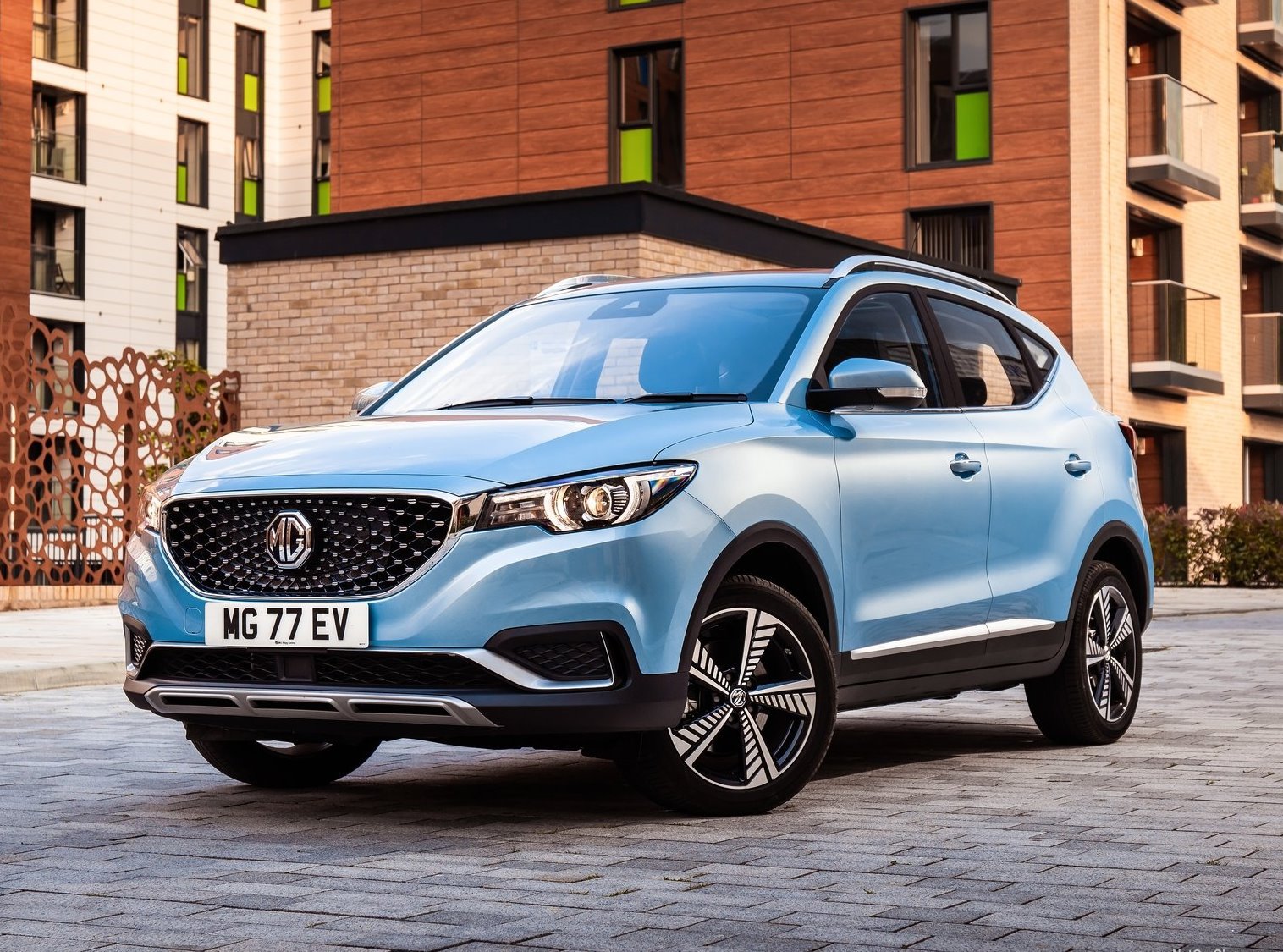 The petrol-engined MG ZS compact SUV was unveiled at the Guangzhou Auto Show in November 2016 and launched in the UK in late 2017. In 2018, the all-electric ZS EV was revealed and is the first battery-only MG production vehicle based on the existing ZS model. It arrived in the UK in September 2019 and has already proved immensely popular.

Being a taller, SUV-styled vehicle rather than a hatchback, the MG ZS EV has a tad more presence than a Leaf. It looks tough and bossy, with a big grille and nice rear wheel arch haunches. It won’t turn heads, but it’s pleasantly contemporary nonetheless. And the EV-exclusive ‘Pimlico Blue’ paint was favourably commented on several times during the test week. 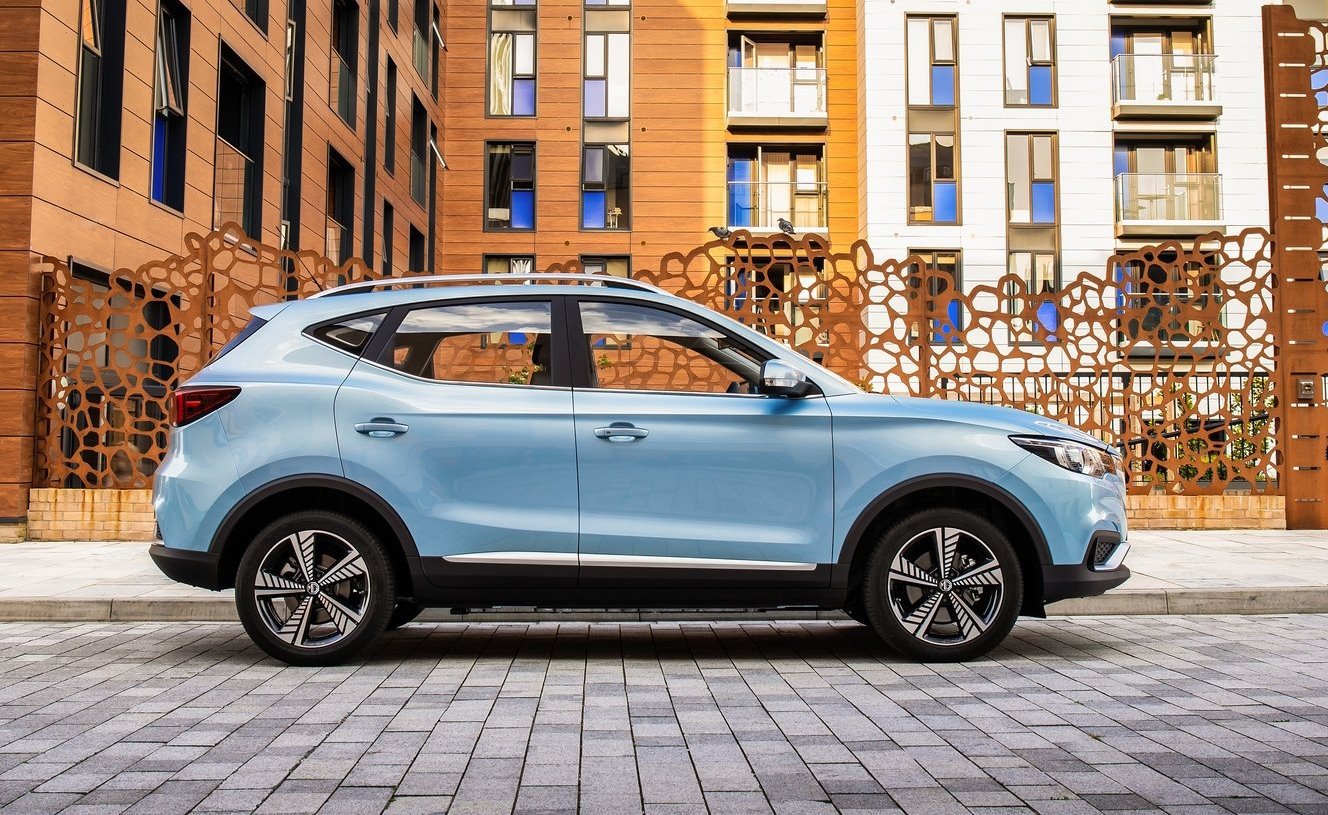 Visually, there are no surprises with the electric ZS as it looks exactly the same as the petrol-engined ZS which, is a bit of an oddity with its dinky 17-inch wheels and protracted front and rear overhangs.

The great-looking diamond-cut alloy wheel design looks like electricity windmill blades and suit the car perfectly – if only they were 18-inchers instead. When you lift the MG logo in the front grille to reveal the charging sockets, the logo pulses with blue light to confirm it’s being recharged.

The interior carries over in every aspect from the regular ZS and includes the smart and well laid out dashboard, with reasonable quality materials throughout, although some of the plastics around critical touch zones are of inferior quality. 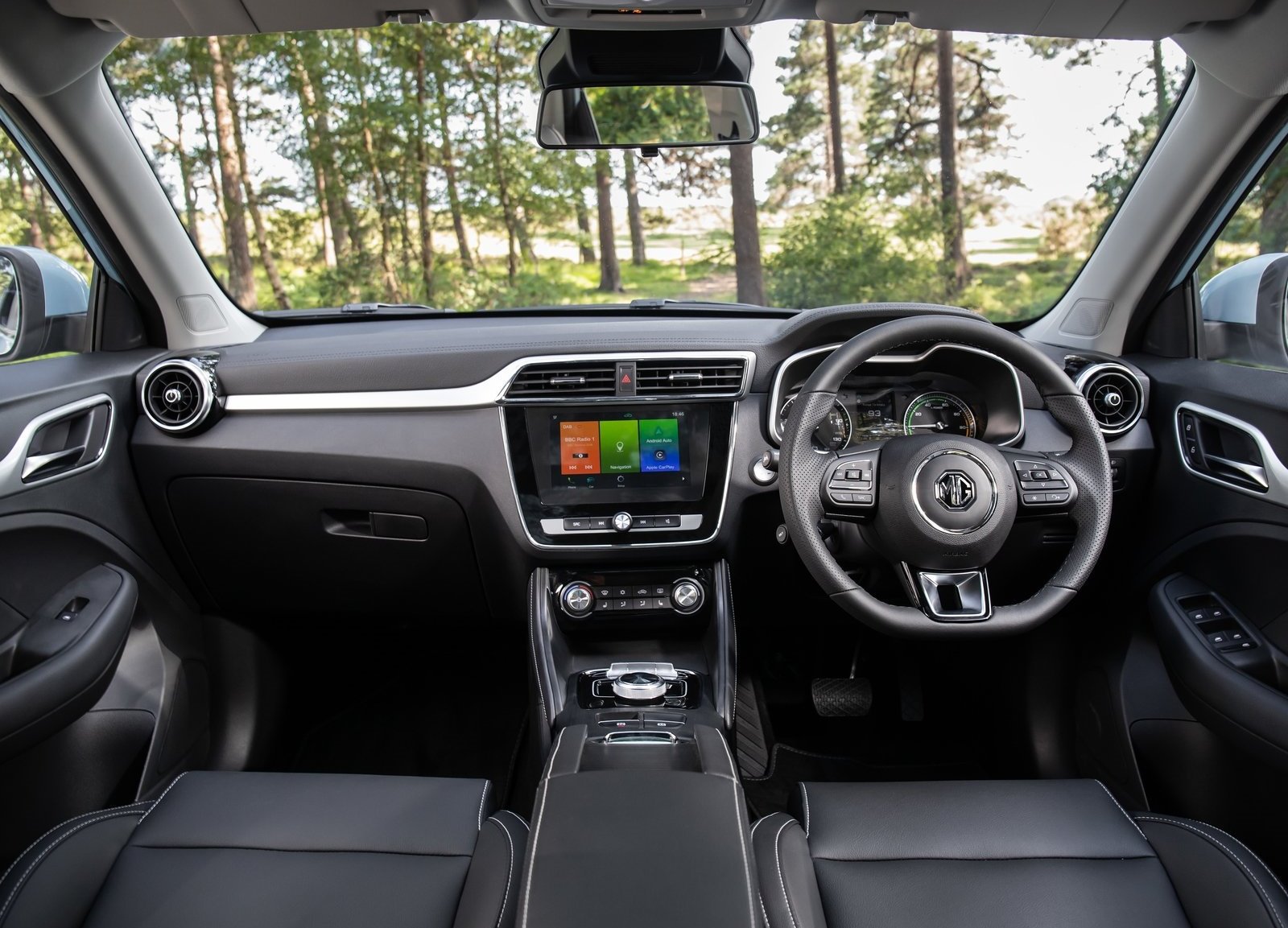 The switchgear has a nice feel to it but is not quite up there with the likes of the Nissan Leaf or KIA e-Niro. Getting comfortable is not straight forward as, like the Leaf, the steering wheel offers rake only and no reach adjustment. The driver’s seat, too, could do with a broader range of movement.

Nonetheless, the ZS is a decent family car with plenty of room even for two adults or lanky teens in the back, and a good-sized boot with variable floor under which is stored the recharging cables and similar detritus. 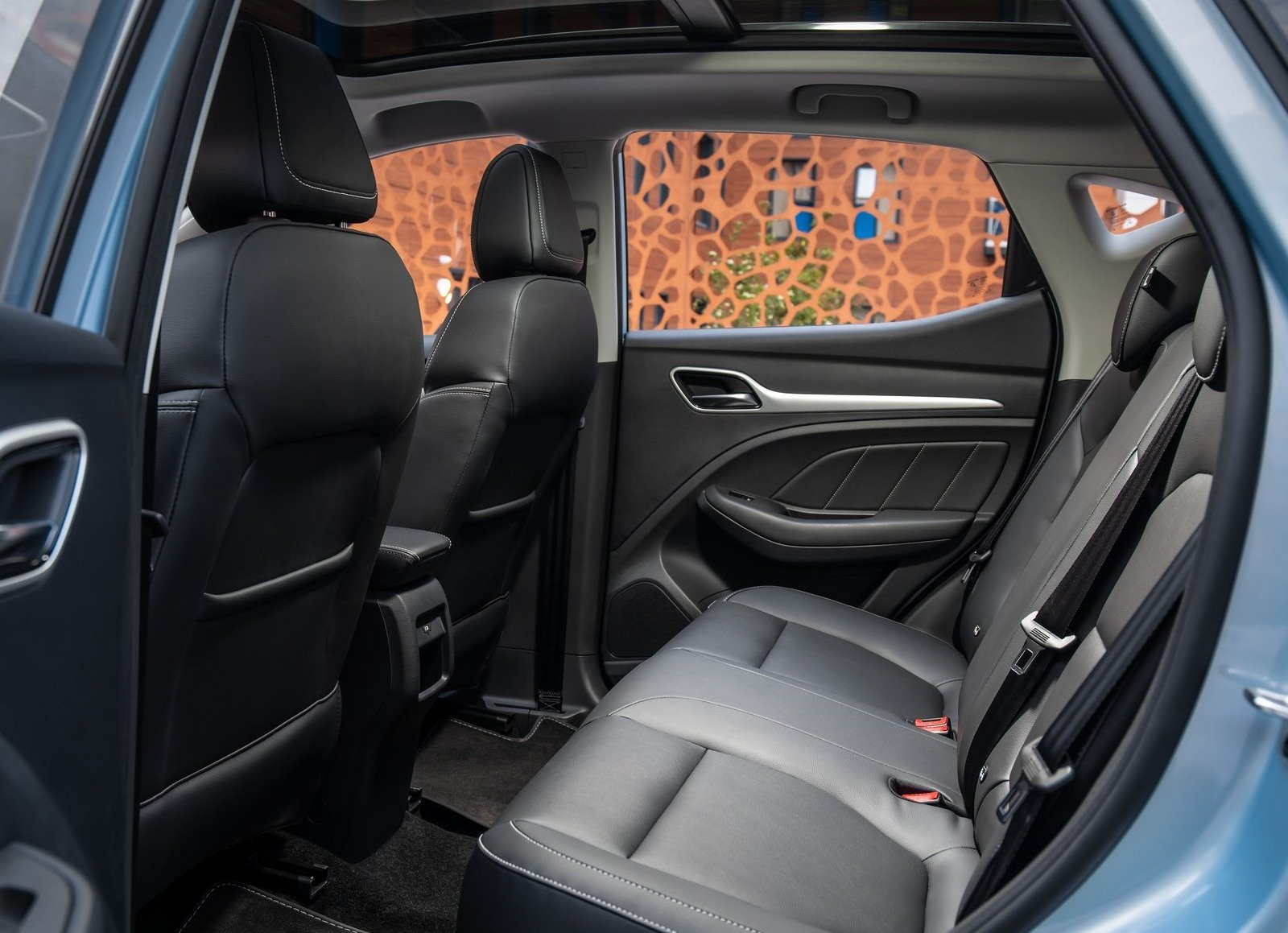 An eight-inch infotainment screen takes pride of place on the central console and MG's decision to make it compatible with both Android Auto and Apple CarPlay is sure to go down well with smartphone devotees. It's mounted slightly oddly, though, behind a glass panel that seems badly prone to distracting reflections and is laboriously slow to respond to touch – sometimes not at all.

Also, there's also no mention of a smartphone app for the MG ZS EV yet, so anyone used to checking up on their EV's charging status remotely over that second cup of coffee, or even pre-conditioning the cabin with a spot of warmth in the winter, will be left out in the cold. 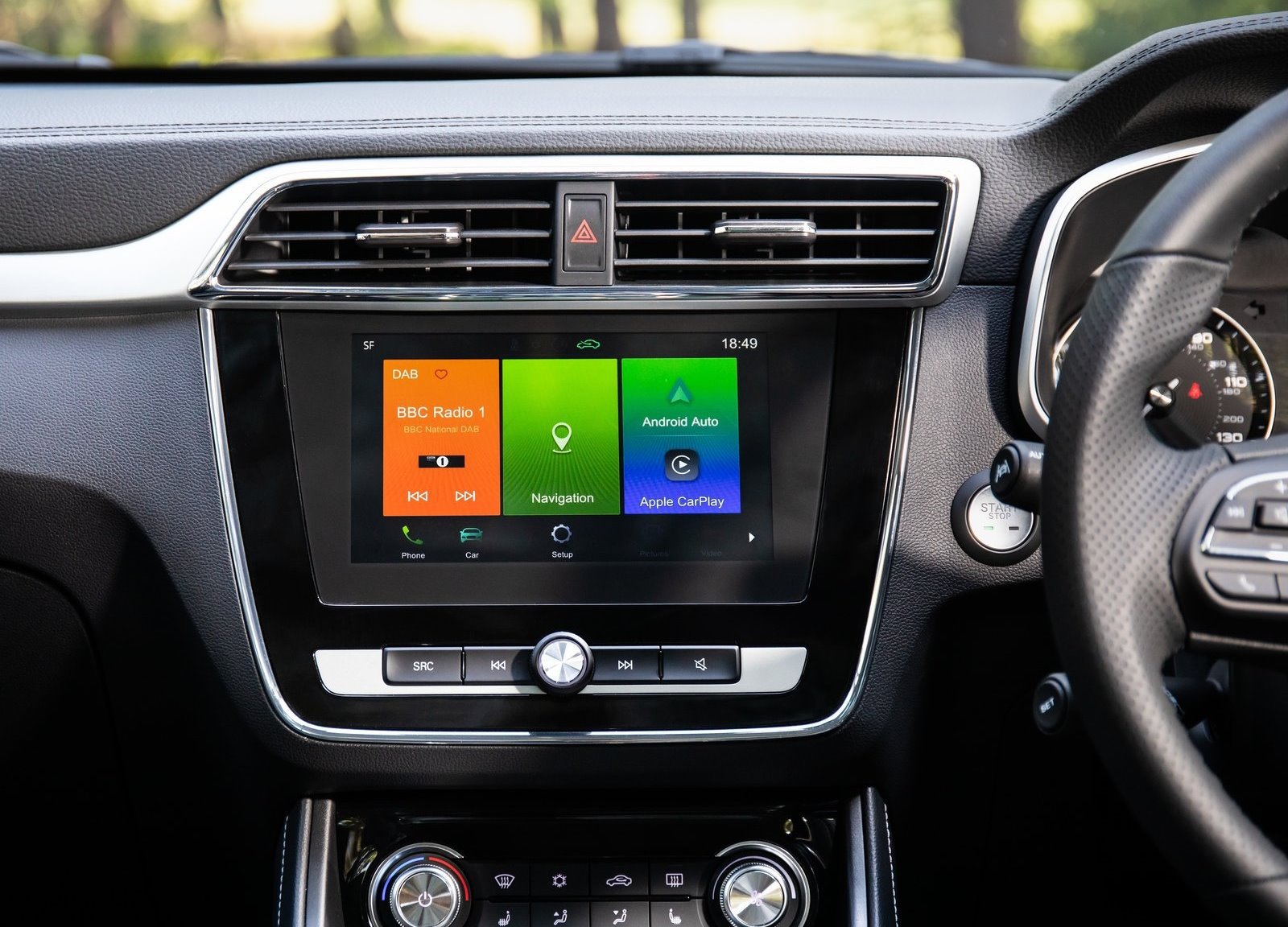 Still, most ZS EV buyers will be first-timers to the BEV lifestyle and will likely not miss what they haven’t experienced.

It’s not unusual for hybrid and electric cars to be slightly compromised by bulky battery packs, but not so in the ZS EV. With its lower centre-of-gravity advantages, the 44.5kWh battery pack is located under the floor and out of the way.

You do feel slightly perched in its high-set front seats, but passengers in the back in particular, will certainly be glad of the good space compared with a Renault ZOE or the forthcoming Vauxhall e-Corsa. The ZS EV is one of the larger compact SUVs on the market and its 448-litre boot and roof rails should certainly appeal to potential EV buyers who don't want to sacrifice practicality. With 1,375 litres of luggage room with the rear seats folded down, the MG is roomier than a Nissan Leaf and similar to the more expensive KIA e-Niro. The boot is a useful shape and you can move the floor up and down to prioritise either a level surface or maximum space.

Considered a part of the MG ZS range rather than a stand-alone model, the EV is offered in Excite and Exclusive trim levels. The standard MG ZS is offered with two unremarkable petrol engines that offer poor fuel economy and substandard performance. The electric powertrain in the ZS is, in contrast, nifty, responsive and costs pennies to run. 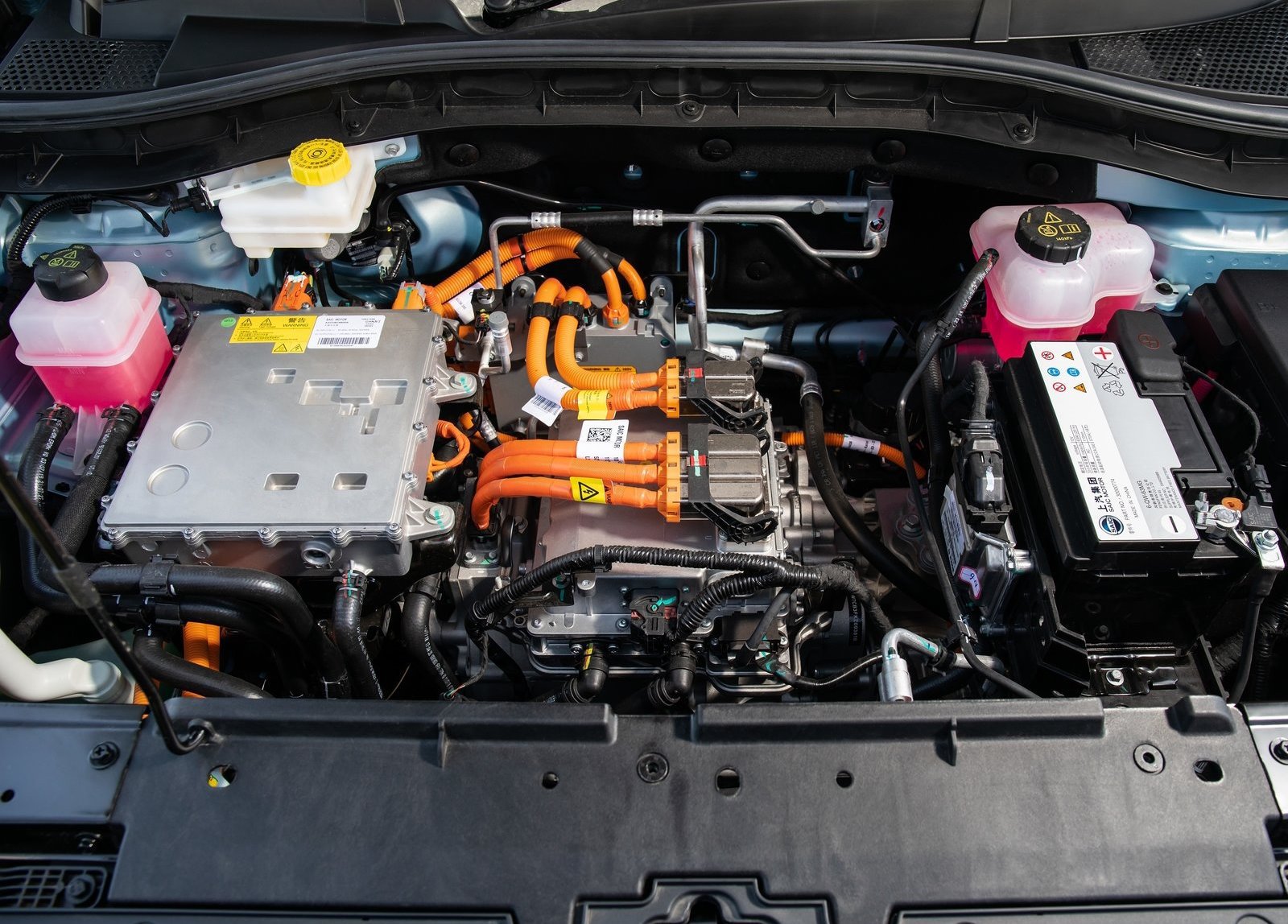 The electric motor produces a more than adequate 143hp and gets the ZS EV from rest to 62mph in a respectable 8.5 seconds. Acceleration up to 30mph is impressive and that’s all down to the way electric cars produce their power – it’s all available instantly from rest, tailing off as your speed increases.

This makes the ZS EV a really good town car. In Sport mode, you can (I did) surprise some performance cars off the lights and there’s certainly enough power that if you put your foot down the tyres will chirp. Continue in that vein though, and you’ll notice the range reduce rather alarmingly. But, driven more sedately as intended, the instant take-up is still very appealing and satisfying.

The ZS EV offers three levels of regenerative braking, from a light ‘1’, a moderate ‘2’ or a whiplash-inducing ‘3’. It is operated by a switch marked ‘KERS’, a moniker used by a previous generation of Formula 1 cars, meaning ‘kinetic energy recovery system’. We now refer to it as regenerative braking which, when lifting off the accelerator has a braking effect as the electric motor becomes a generator and reclaims some of that energy that might otherwise be lost in braking. This means that for the most part you can drive the ZS EV without touching the brakes at all, particularly when using the active cruise control which brings the car to a stop and sets off again when it detects the lead car’s movement.

Heading out onto faster roads isn’t likely to be as relaxing in the ZS as it would be in some rivals. The car’s top speed is just 87mph, so cruising at 70mph will see your range reduce quite quickly. It’ll be fine for short jaunts, but those looking to do regular long journeys would be better served by a Leaf+ or a Tesla Model 3.

The ZS EV’s official combined range is 163 miles. MG claims that in urban conditions this rockets to more than 200 miles due to the energy recovery. However, I certainly didn’t experience any discernible mileage gain around the clogged urban roads of coastal Hampshire. 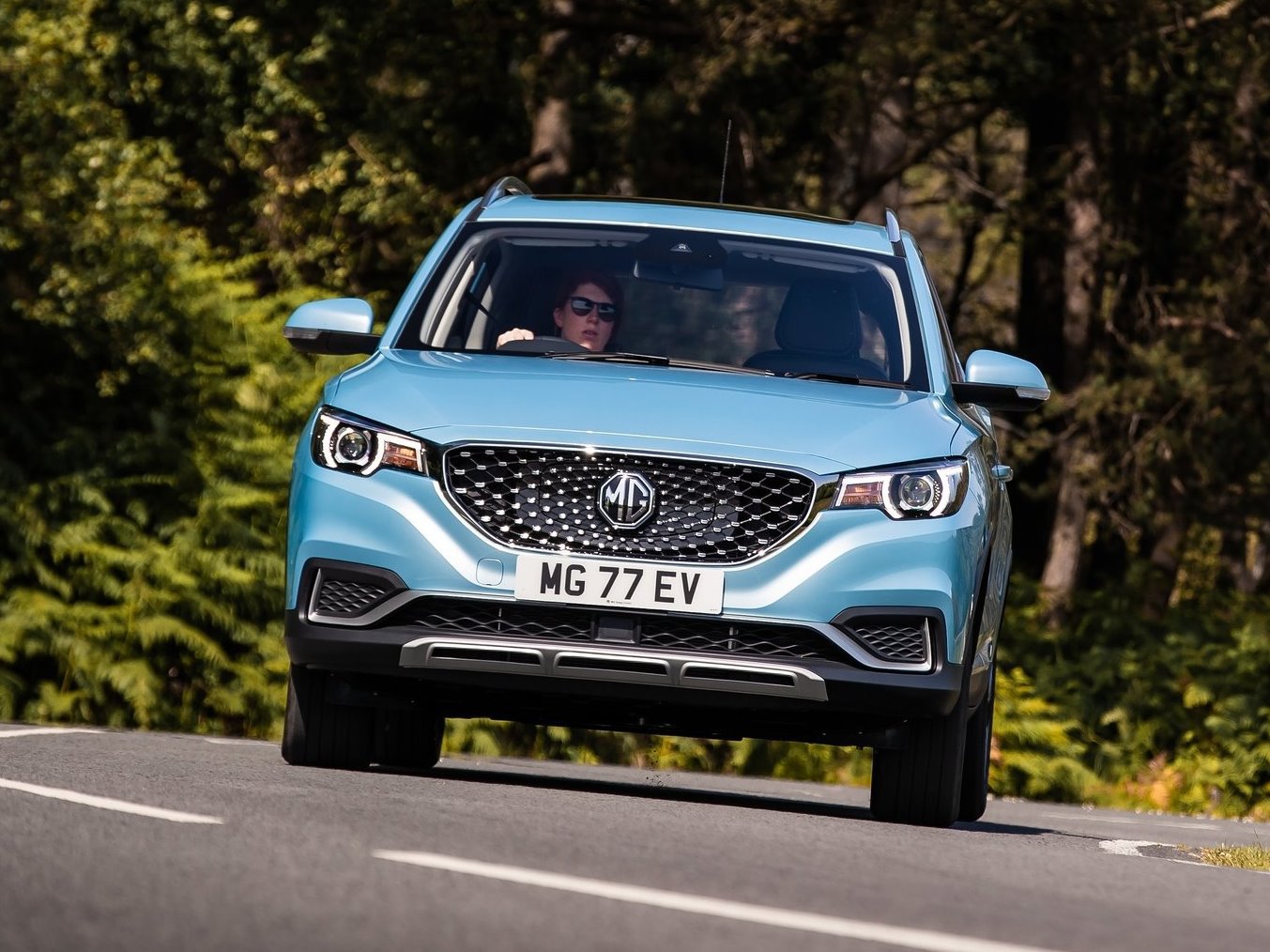 Acceleration aside, its driving experience is unremarkable - but that's no bad thing, it's simple and easy to get around in. Most bumps are dealt with by the soft suspension, but this also means the ZS EV can feel slightly wayward at times, with a bit too much body lean.

One thing I couldn’t help noticing was the unrefined character of the active cruise control technology. Underway, the tech was fine, but when in heavy traffic the car slows itself down to a stop, you could hear the whizzes and whirls of the electronic servos going about their business under the car. My 84 year old MIL commented on it, too, and she’s not got the best of hearing. But, as she doesn’t need reading glasses, I’d best move on. Comparatively, the ZS EV’s range is nothing exceptional at an official 163 miles (as measured in WLTP tests), while, for context, the e-Niro can manage 282 miles, the Renault Zoe 186 miles and standard Leaf 168 miles (Leaf+ 239 miles).

The ZS EV can take up to 50kW from a public CCS point, giving a 0-80% top-up in around 40 minutes. If you charge up at home or at work using a Type 2 connector from a 7.2kW wall box (as most owners will), the car's 44.5kWh battery takes roughly six and a half hours to charge up fully from empty – ideal for the work day or overnight at home. If you have to charge using a 3-pin domestic supply, expect it to take around 14 hours. Because most daily round trim commutes are less than 40 miles, the ZS EV is a thoroughly realistic proposition for many families – particularly those with access to another car.

The ZS EV is the first MG in the UK to feature the MG Pilot suite of driver assistance tech that includes active emergency braking, lane keep assist, adaptive cruise control, traffic jam assist, blind spot detection, high beam assist and speed limit assist. They are accompanied by irritatingly loud bongs and bells, none of which I deemed to be remotely merrily-on-high, considering the time of year it was on test.

You can turn off the MG Pilot feature, but you’ll have to do it every time you activate the start button. I did.

According to the latest crash-test results from Euro NCAP, the MG ZS EV was awarded a full five stars, rating 90% and 85% for adult and child occupancy respectively, and 70% for safety assist. The petrol-engined ZS achieved a mere three stars in 2017, before the introduction of MG’s Pilot safety suite. The MG ZS EV offers interesting if conventional styling, plenty of equipment, ease of driving, reasonable quality and a seven-year warranty on both car and battery.

There are a few critical areas where it could be improved, but overall this makes much more sense for urban driving than a petrol- or diesel-powered compact SUV, with the accompanying green credentials and reduced running costs.

As a proposition for first-time electric-only customers, the new MG ZS EV has to be one of the best on the market.

* Browse our top leasing deal on the MG ZS Electric.