The Porsche 911 GT3 is a hardcore track-focused version of the 911 that has gradually become more usable and taken a stronghold in the performance car marketplace. Mercedes wanted a piece of that action and so a memo was sent to their slightly less hinged partners at AMG with instructions to build a car that would beat the 911 GT3 and any of its ilk. The Mercedes-AMG GT R is what they came up with. 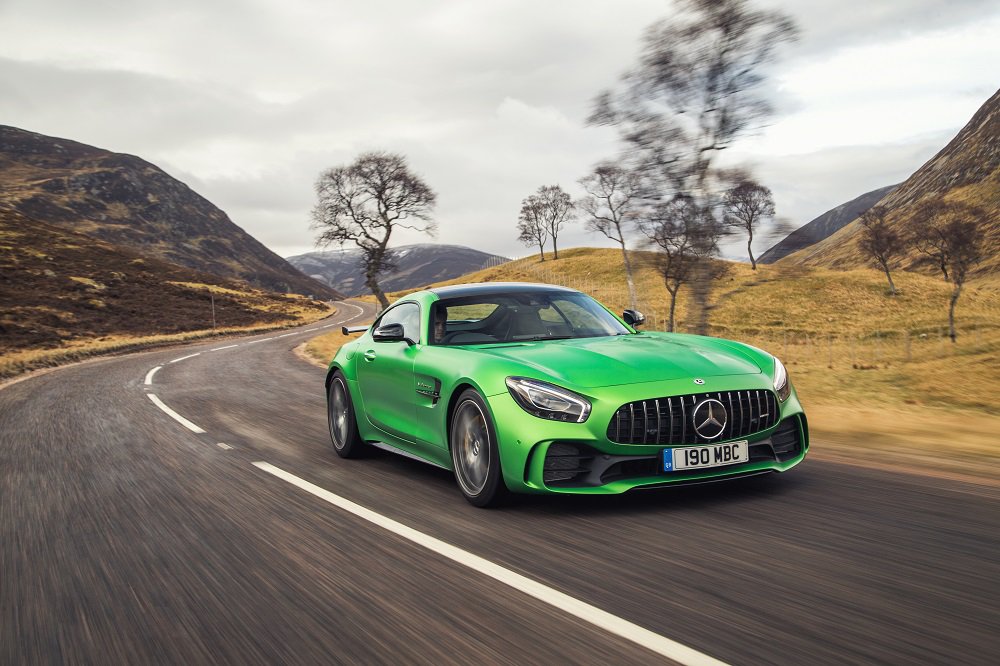 Taking the mightily impressive AMG GT as a starting point and the GT4 race car as their inspiration, the boffins in Affalterbach set about designing an AMG GT that was faster, harder and more brutal, yet retain the GT’s everyday usability. A big ask indeed, but one which they appear to have succesfully answered.

The Mercedes-AMG GT R is dead sexy. The newly designed Panamericana grille with vertical chrome slats gives the two-seater’s pointy end a sharknose quite unmistakable when it comes tearing up in your rearview mirror. There are carbon fibre front wings which are 46mm wider, while steel extensions beef up the rear by 57mm, increasing the car’s track width considerably. Carbon fibre is also deployed for the roof panel, in various places under the body and bonnet to brace the superstructure and also for the car’s ‘torque tube’ carbon fibre propshaft. 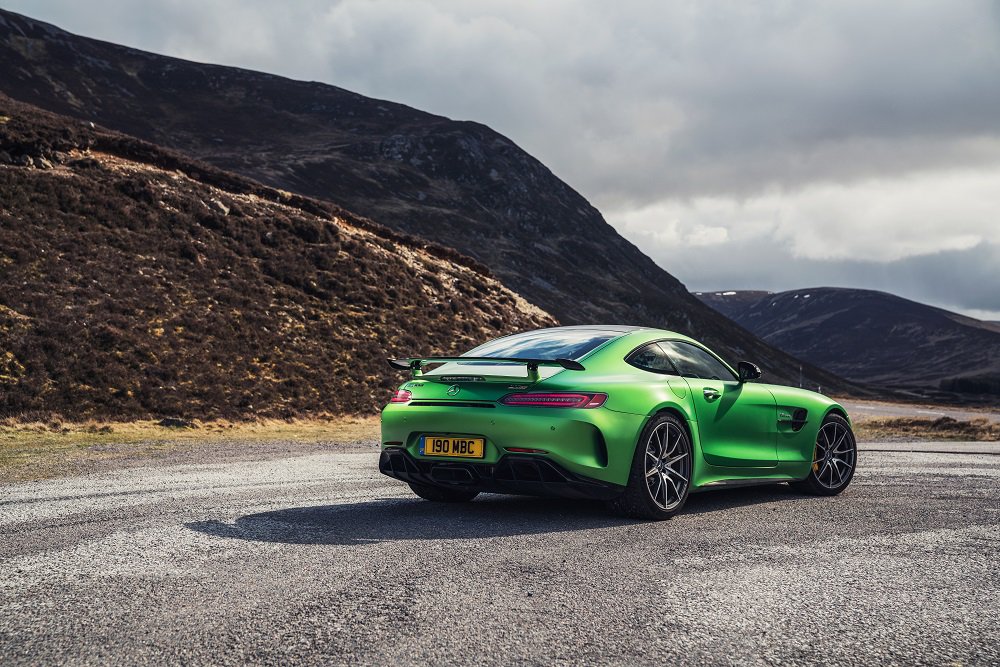 The suspension has adjustable coilovers and adaptive dampers tuned for the type of driving expected of the GT R and there’s a thicker anti-roll bar than the standard GT at the rear. Forged aluminium is used for the car’s wishbones, hub carriers and steering knuckles, all aimed at reducing the car’s overall unsprung mass.

Active aerodynamic features include an underbody aerofoil that automatically extends 40mm downwards at high speeds (like the Alfa Romeo Giulia QV), keeping the front end down and reducing front axle lift. It retracts again at low speeds to guard against kerb and speed bump damage. I’d like to report that I felt the difference as it deployed, but I was too busy enjoying the all-too-brief driving experience.

The GT R is also the first Mercedes-AMG to feature active rear-axle steering. The system, which is similar to the one used by Porsche and BMW, applies up to 1.5 degrees of toe angle working against the direction of the front wheels at low speeds and with them at higher speeds. 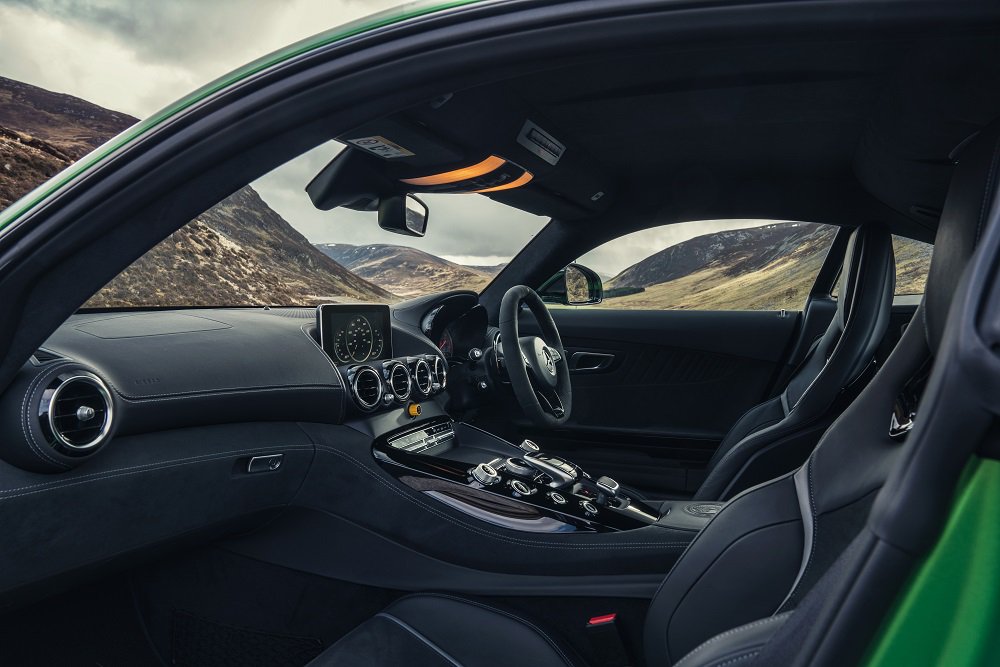 While the GT R's exterior exudes sports car good looks, it's the cabin and cockpit detailing that really impresses. Nappa leather and alcantara have been liberally applied and the pair of AMG Performance seats come as standard. They felt comfortable enough, but I do prefer to sit up a little higher to at least try and find the end of the bonnet when I'm driving. Fortunately for little me, front parking sensors are standard.

A button under the steering wheel opens the rear hatch, which would easily fit a night bag or two and the rest of the controls were straightforward to use, including the easy-to-reach paddle shifters behind the wheel. The seat position offers good adjustability to attain just the right amount of space behind the steering wheel. 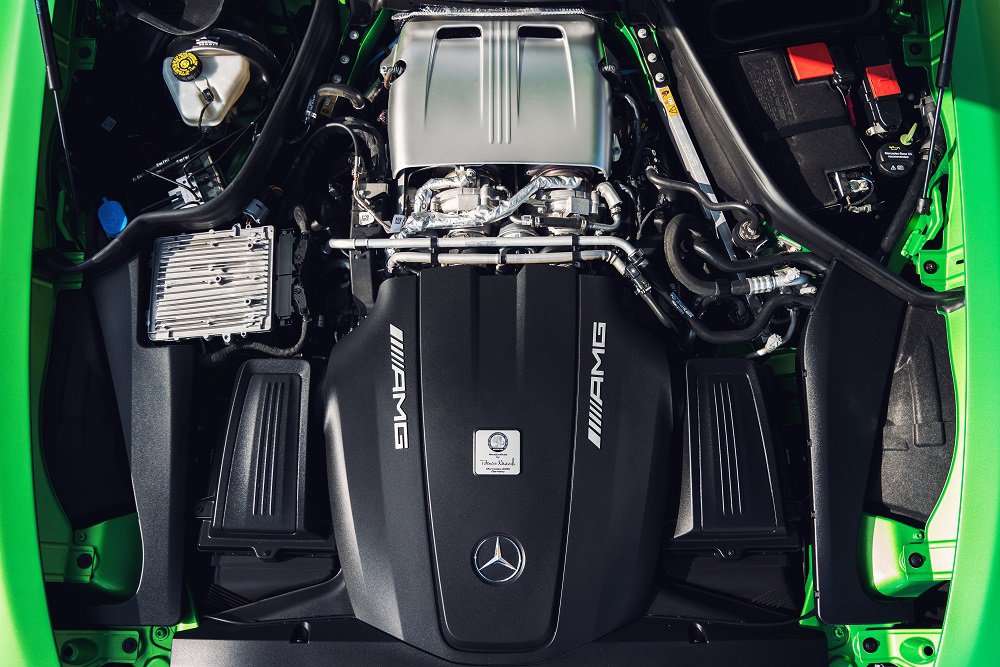 The twin turbocharged 4.0-litre V8 plucked from the GT S (and now shoehorned into the new Aston Martin Vantage) gets new wastegates, exhaust ports and turbos, runs a higher compression ratio and gets tweaks to the ECU to release an extra 62bhp to produce a stonking 577bhp and a knuckle-draining 700Nm of torque.

Given that it weighs 15kg less (28kg if you spec the ceramic brakes) there’s an obvious jump in performance too as the 0-62mph time drops to 3.6 seconds and top speed increases to 198mph (good luck finding a place to attain that). Drive to the rear wheels is via a seven-speed dual-clutch automatic gearbox, but now houses a shorter final drive, a longer first gear and a shorter seventh gear than that of the GT S. 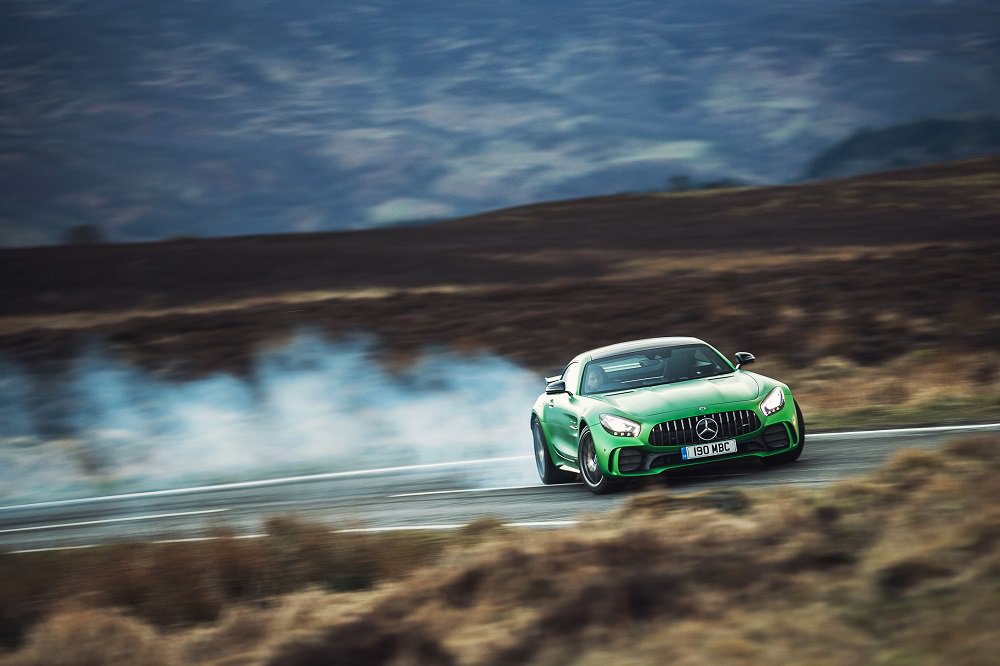 That cracking V8 allows its gases to escape the vehicle via what can only be described as blunderbusters. There is a central twin pipe, with another pipe in the diffuser either side of it and the noise they make, especially in ‘race’ mode when all the pipes and valves open, is nothing short of biblical. If you decided to accelerate within earshot of the Isle of Wight, you could be up in front of a judge on GBH charges.

There’s also a new multi-stage traction control system as well, which allows a huge range of options for how much you want the car to reign you in when you’re chest-thumping on track. It’s all controlled by a bright yellow dial in the centre console and is basically a ‘silly button’; you choose how silly you want to be and the car adapts accordingly. Dial it fully over and, basically, you’re on your own. 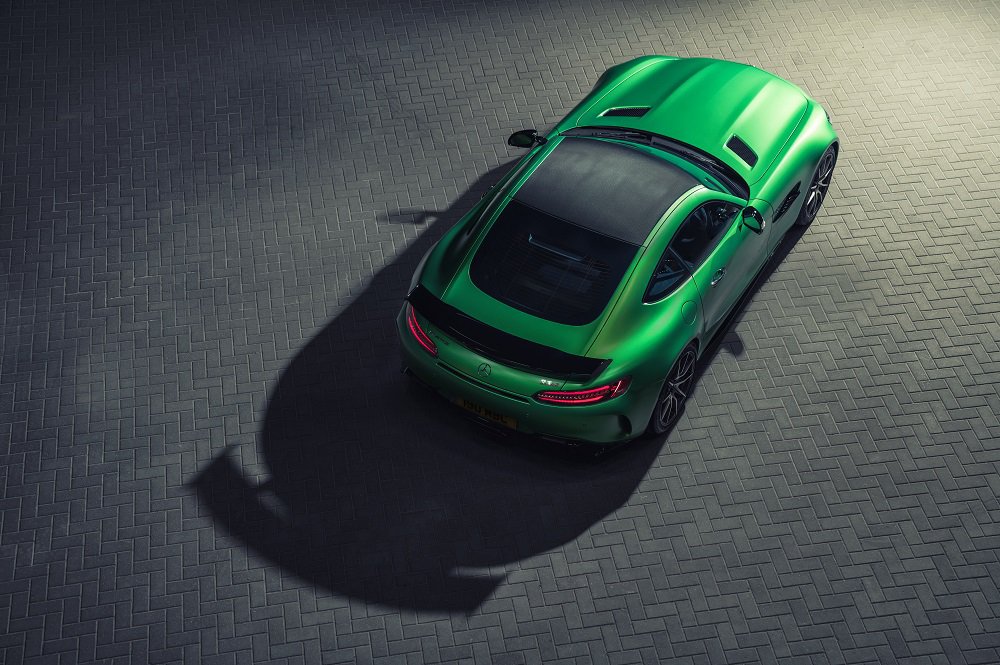 Cars engineered to be all mouth and trousers around race tracks aren’t always so on the road. There’s an underlying firmness to the GT R’s suspension, even if you pop the dampers in their softest setting. But, rest assured, it’s no Lotus Elise.

On the road, the suspension excels at keeping the GT R flat and true through every sort of curve your favourite B-road throws at it; rear-wheel steering and the massive standard-fit Michelin Pilot Sport Cup 2 tyres (275/35 ZR 19 at the front and 325/30 ZR 20 at the rear), build on that further, giving this car the sort of physics-denying ability usually only ever encountered in honest-to-goodness supercars like the Ferrari 488. Admittedly, the GT R still doesn’t feel as light or as agile as, say the McLaren 570GT in tight corners and quick direction changes, but through fast, sweeping curves it’s a match for anything. Equally, the GT R’s steering isn’t as feelsome as the McLaren, but it is engaging and tough to fault for precision. 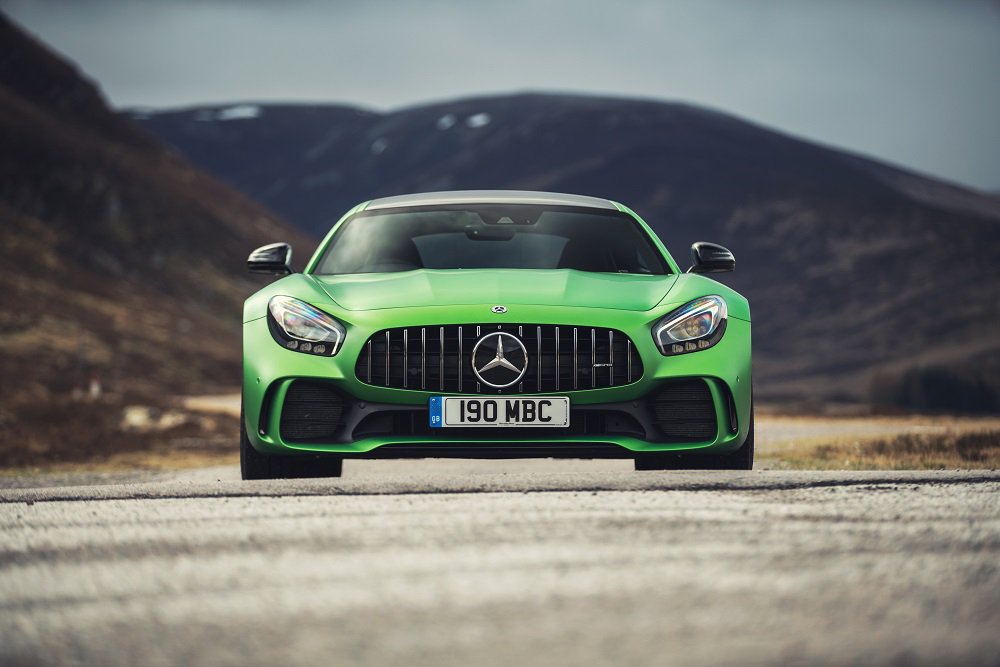 I wouldn’t like to be in Mercedes-AMG’s shoes right now. In the GT R, it is possible that the performance car maker may have peaked. Quite just how they’ll supersede this is beyond me. More importantly, why would they want to? It’s pretty much perfect.

Sadly, the odds are that the majority of this car’s potential will remain bottled for much of its life and most AMG GT R’s will never reach its top speed or encounter its peak cornering g-force. It’s not a real race car no, but the AMG GT R has all the romantic elements of a race car…the wings, the scoops, the power, sonorous roar and crackle, on top of being a genuinely pleasant place to spend an entire day or two. Besides, just look at it! 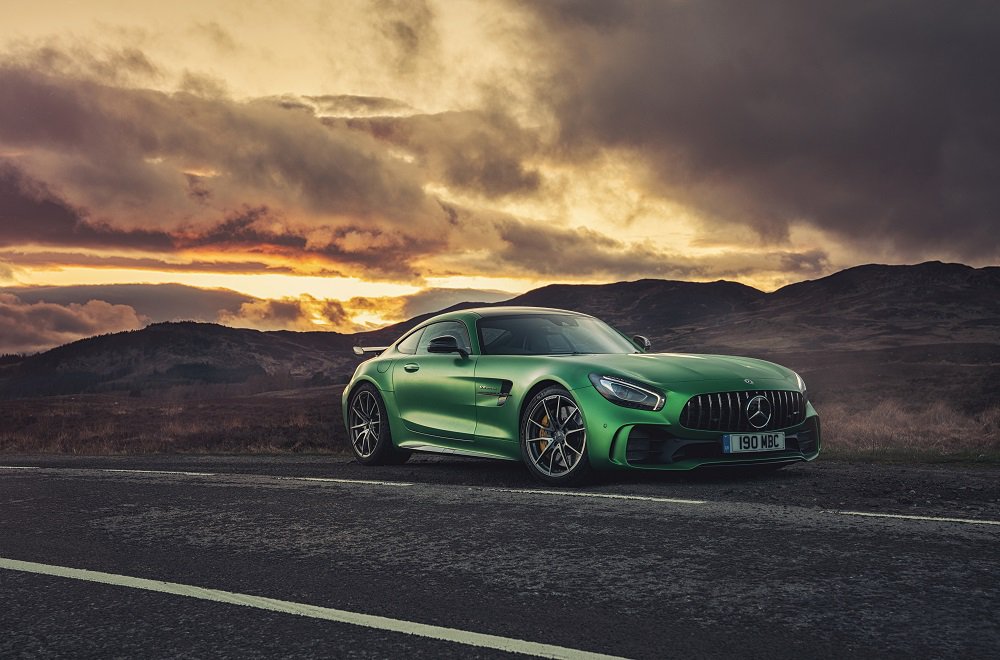 It’s still very much the grand touring car its name implies, but has that added ‘R’ and few quirks here and there to remind you it has a sibling that does race…and win. It’s a car that flawlessly executes the ideal balance between GT and R.

Are you looking to lease something that'll set your pulse racing...

Ford' American icon gets the road test review treatment in top down...