Launched amid much media fanfare in 2012, the Mazda CX-5 mid-sized SUV has become a key model for Mazda, to the extent that it now accounts for a quarter of all the Japanese brand's global sales. More than 1.5 million CX-5s have been sold worldwide, with 32,000 here in the UK.

Last year, the CX-5 underwent a thorough refresh both inside and out. As before, it offers exceptional driving dynamics, efficient running costs and decent practicality. The engine line-up hasn’t changed as there’s no point messing with a good thing, but pretty much everything else about the CX-5 has, with higher quality interior materials, a more driver-centric dash, greater infotainment connectivity and its already sharp handling is now even better.

There is much harping on about the market being crowded in the SUV/crossover sector, but frankly, it’s a bunfight out there. This second-generation CX-5 will need to be more than just good as it faces a quite different and increasingly competitive landscape from six years ago. 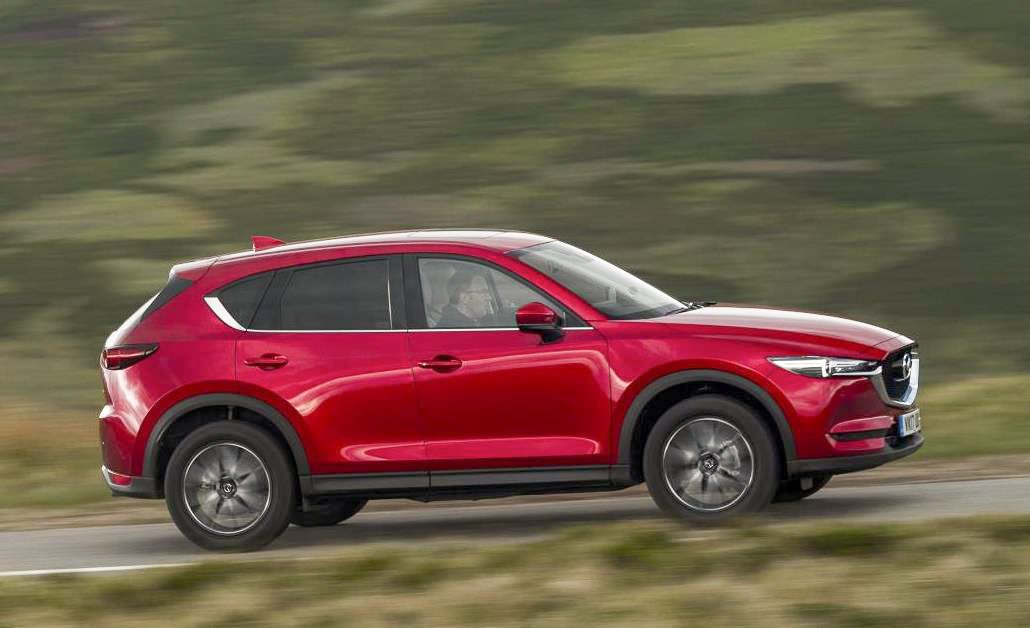 The CX-5 is the car that introduced Mazda's 'KODO, Soul of Motion' design philosophy in 2012 and applied a year later to the stunning Mazda6 saloon and estate. The restyling of the new CX-5 is more evolution than revolution over the previous model.

The new car rides lower and has a more upright windscreen to give the look of a longer bonnet. The restyled front end now conforms more to the Kodo design aesthetics found on the smaller CX-3 crossover. The bonnet hangs over the larger front grille adding to its angular look and there are narrower front headlamps, slim-line light clusters at the rear, sharper bodywork creases and better trim details.

While the CX-5 may not appeal to all, it is definitely one of the better-looking cars in its class compared to the rinse-and-repeat styling coming out of Germany in recent years. When looking at its place in the current Mazda model line-up, the CX-5 is easier to ‘get’. 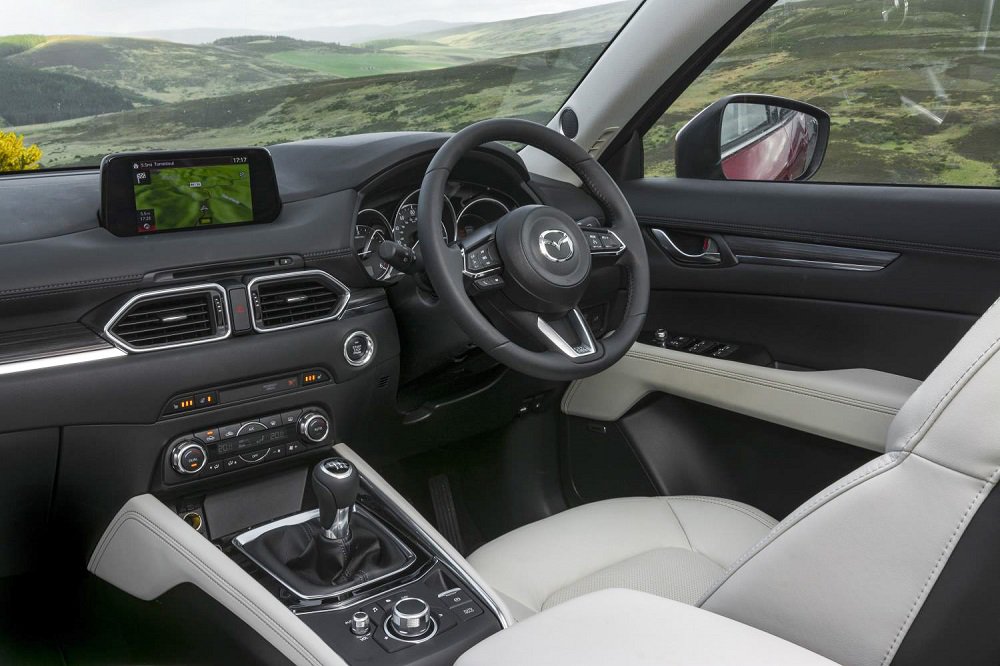 Climb aboard and you’ll find a completely re-designed interior that blends good cockpit ergonomics with a high-quality and spacious cabin environment. Like the CX-3 and current MX-5 roadster, the dashboard is dominated by a high-mounted 7.0-inch colour touchscreen and features full navigation as standard. It has the same user-friendly interface as in those cars, with a touchscreen for use when parked and a rotary controller for when on the go. What it should do – but doesn’t – is deactivate the touch part when in gear.

Mazda are to be commended for keeping the heating and ventilation controls away from the touchscreen. They are now set lower down on the centre console and use intuitive, easy-to-reach dials. 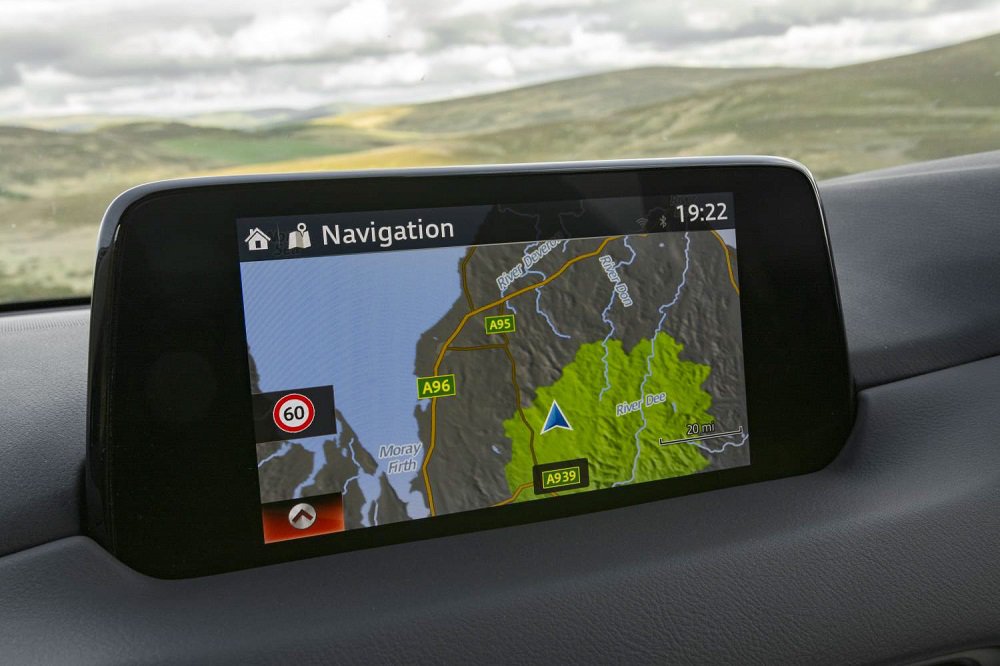 Top-spec models benefit from attractive wood trim and softer leather padding on the lower dash and the centre console is placed higher than before, bringing the stumpy shift lever 40mm closer to the redesigned steering wheel. Seat adjustment is excellent and a good driving position easily and quickly found.

The front seats are notably more comfortable and offer plenty of support when pressing on and the head-up display is now projected onto the windscreen rather than a rising piece of plastic, which looks a lot nicer. 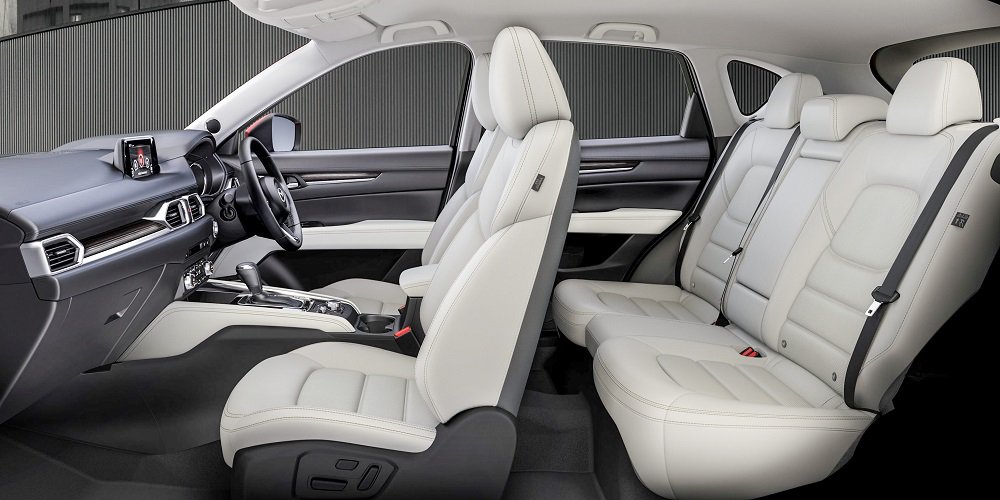 The rear seatback is split in a particularly practical 40/20/40 configuration and passengers benefit from restyled and bolstered seats which now offer a reclining mechanism to help get comfortable and have added two air-conditioning vents to keep them cool. A centre armrest which folds away into the middle seat offers two USB ports and heated seat controls, depending on trim level chosen.

Headroom in the back is very good and legroom is adequate. The rear doors open really wide though, so fitting a child seat will be easy. Boot space is a generous 506 litres, but fold row two fully flat to reveal a practical 1,620 litres. 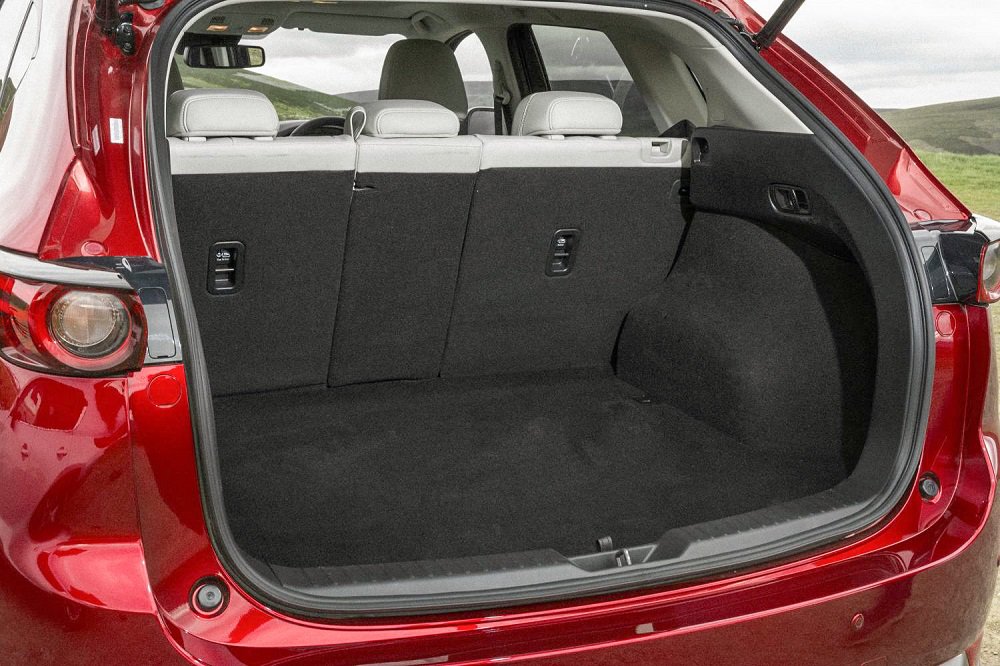 Mazda has kept the model options simple with just two trim levels available: SE-L Nav and Sports Nav. For the money, you won’t feel short-changed by a lack of equipment with navigation available on both models.

Stepping up to Sport Nav is costly but brings a leather interior with power-adjustable heated seats up front. Your tunes will sound better via the 10-speaker Bose stereo and your hands kept warm on the heated steering wheel. A powered, remote controlled tailgate aids practicality, while handsome 19-inch gunmetal alloys fill the wheel arches better. There’s also a coloured head up driver display, traffic sign recognition and a sunroof which, oddly, is only available when selecting the 173hp diesel engine. 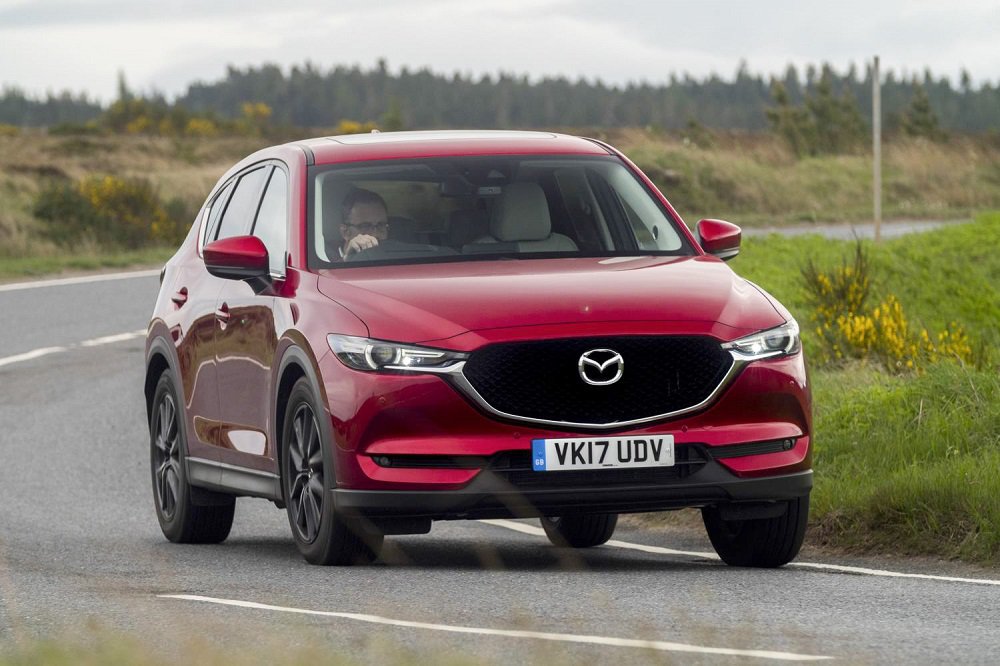 Equally simplified is your choice of engine with just the one petrol and one diesel which, fortunately, is available in two states of tune. Both are carried over from the previous model but have incurred minor technical tweaks to keep them up-to-date.

The diesel choices are a 148hp or 173hp version of a 2.2-litre turbocharged four-cylinder engine, which has been tried and very tested in several other Mazda models.

The 173hp/420Nm diesel is much quieter and more refined than previous and its sheer pulling power is as impressive as ever. It seems very keen to rev and is surprisingly responsive when you make sudden demands of it, such as when overtaking slower traffic. At a recent Mazda drive event, I spent a short time with the lesser powered 148hp/380Nm diesel and found it more than adequate for day-to-day driving. 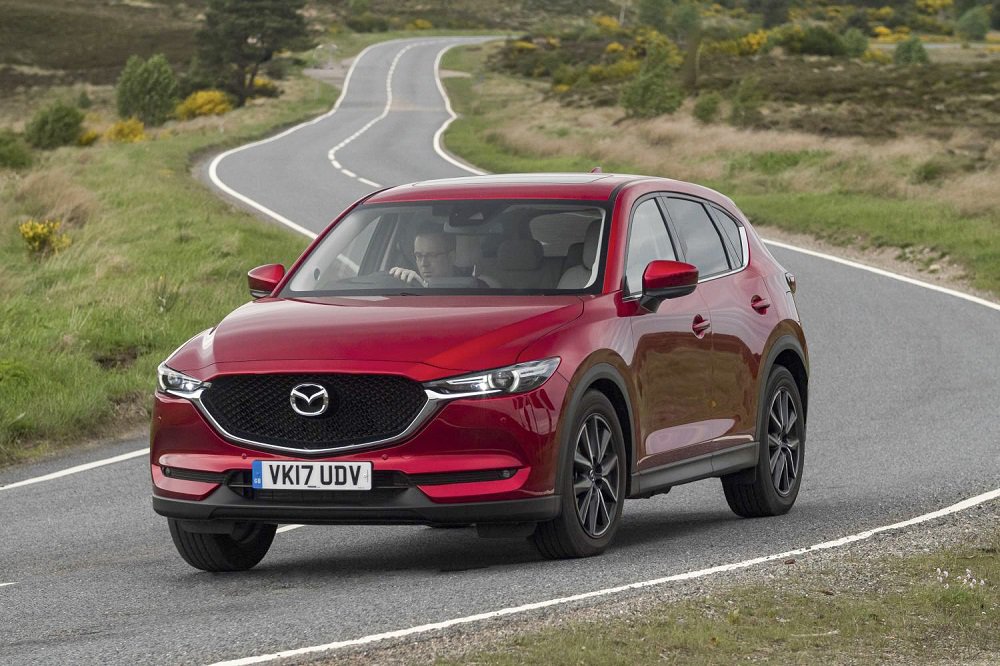 The standard gearbox is a six-speed manual, which has a slick, short shift action via a stumpy stick and is much more enjoyable than the six-speed automatic alternative and feels similar to the MX-5 roadster. The automatic adds to the expense while reducing fuel economy and increasing emissions, but it’s otherwise adequate if an automatic gearbox is a must.

Only one petrol engine and transmission is offered on the CX-5: a 2.0-litre 163bhp four-cylinder paired to the six-speed manual ‘box. Its key appeal is that it’s by far the least expensive engine in the range and low-mileage drivers are likely to find it no more expensive to run than a diesel.

Despite its 163hp/210Nm, the naturally-aspirated petrol engine simply can’t match the pulling power and low down grunt of either of the diesels and their more muscular feel means they suit the CX-5 rather better – especially if regular towing is your thing. Reaching 62mph from a dead start takes 10.4 seconds which is slower than either of the automatic diesel versions. What it needs is a turbocharger.

All-wheel drive is an option on the CX-5, but only when choosing one of the diesel engines. 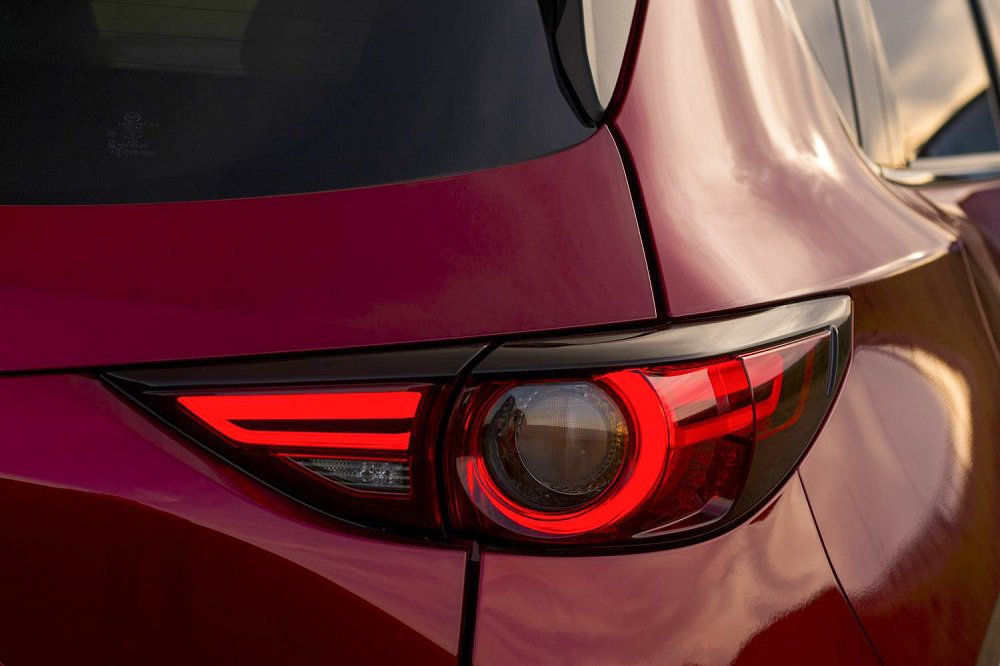 The previous chassis of the CX-5 underwent major improvements and is essentially 52 per cent new. The wheelbase of 2,700mm is the same, but higher strength steels have been used to increase torsional rigidity, while the suspension was totally overhauled to further improve ride quality, handling and refinement.

The body is 15 per cent stiffer than before, allowing the engineers to improve steering, brakes and suspension, plus introduce Mazda’s 'G-Vectoring Control' technology which improves cornering response and stability. Unlike rival systems it doesn’t use the brakes to sharpen turn-in and dial out understeer. Instead, it subtly reduces engine torque as you turn the wheel, momentarily decelerating the car and shifting the weight forward and over the front tyres for increased grip. Altogether, these improvements transform what was already a very good car into an even more composed, comfortable and athletic package.

The steering is rather light and may take some getting used to. However, it is precise and offers more feedback to the driver than many in this class. As is the nature of the SUV beast, the CX-5 leans in the corners but much less than it used to and is of little concern when making rapid headway.

The pedals are well spaced and the progressive brakes offer decent stopping power. The CX-5 also smothers bumps well, avoiding the jiggly low speed ride that usually accompanies cars like this. Add the excellent suppression of wind and road noise, and the Mazda makes for refined and relaxed progress.

If towing is your thing – from horseboxes to caravans – the Mazda CX-5 is offered with two maximum braked trailer towing capacities: 1,900kg and 2,000kg. The latter is the capacity for both diesels irrespective of transmission and whether the car is two- or four-wheel drive. The lesser weight is for the petrol engine only, which does not have a four-wheel drive option. 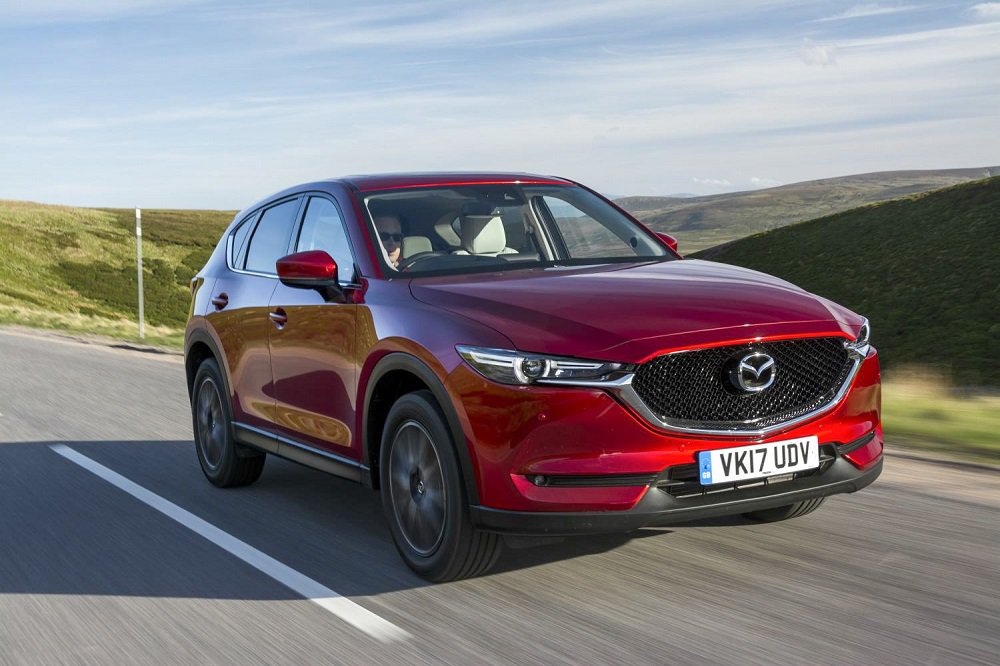 Generally, official fuel economy figures these days need to be taken with a cup of salt as most are obtained in a laboratory environment and thus should only really be used for comparative purposes.

The official mpg average for the 2.0-litre petrol engine is 44.1 on the combined cycle but realistically don’t expect anything over 40 in ever-day driving conditions. CO2 emissions are 149g/km which is reasonable.

Despite what the government’s PR machine will tell you, diesel-engined cars continue to attract better fuel economy and greater efficiencies that most petrol-engined cars and here, Mazda leads the pack in many respects.

Those figures are for manual, front-wheel drive setups, and will rise exponentially for automatics and all-wheel drive. 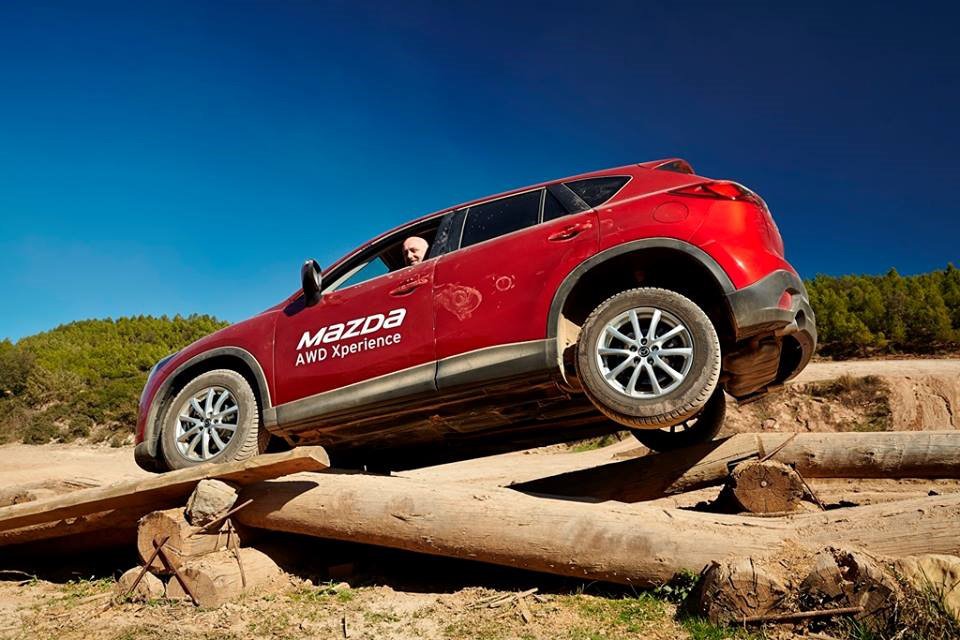 As with the systems employed by most of its rivals, this car has a set-up in which the torque is automatically split according to the terrain you're on, so it can direct 100 per cent of drive to the front wheels in normal conditions, with up to 50 per cent then directed to the rear wheels if slip is detected.

Several months ago, I was selected to join Mazda EU at their #MazdaAWDXperience held at Les Comes off-road adventure centre near Barcelona, Spain. Most big-hitters in the specialist off-road world such as Land Rover, Jeep and Mitsubishi use their facilities for off-road testing. We were able to put the CX-3, previous generation CX-5 and the AWD Mazda6 through their respective paces traversing some really harsh terrain through a series of extreme off-road challenges. All came through with flying colours. 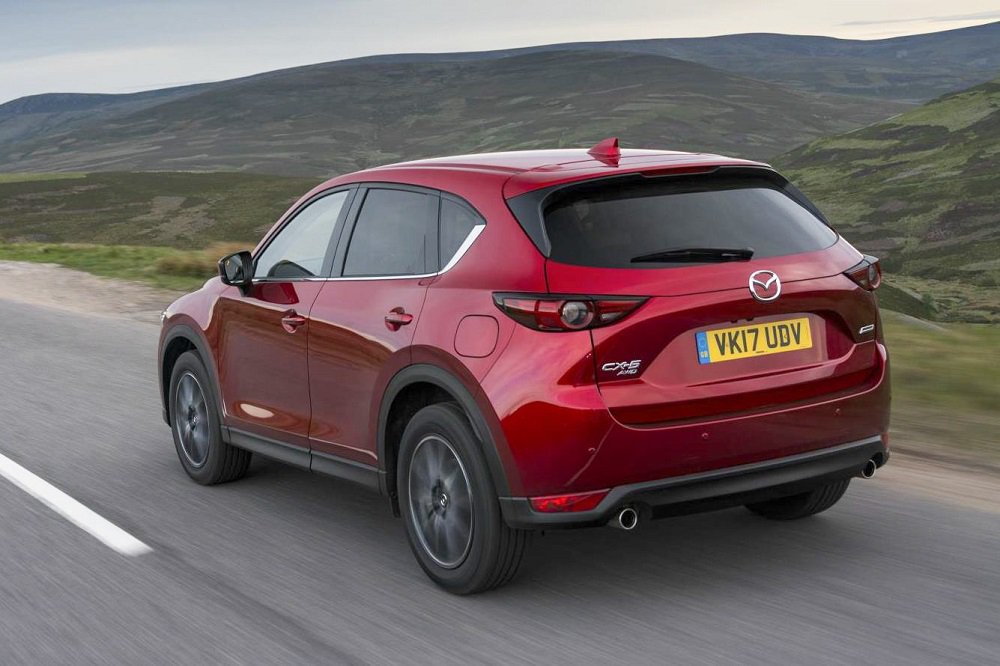 This second-generation Mazda CX-5 SUV faces a tougher challenge in a market very different from that of 2012 when it first saw the light of day. Mazda is hopeful that the combination of crisp, angular styling and a smorgasbord of high-end equipment even on the range-entry SE-L Nav will be enough to head off latter-day challengers such as Volkswagen’s latest Tiguan, the new Skoda Kodiaq and BMW’s imminent X2 – to name but a few.

With such a good base from which to work, there’s little surprise that with the enhancements Mazda has made in styling, refinement, comfort and technology, the new CX-5 gives its rivals an even more serious run for their money.

If you’re in the market for an SUV but have no need for that third row of dickey seats, then kindly walk this way, because you really don’t need to look elsewhere.