Making its UK debut in 2005, the KIA Sportage has become one of the best vehicles in its class and has gone on to become KIA best-selling model in the UK. In Europe last year alone, more than 131,000 units of the Sportage were sold. Under design director Peter Schreyer (the chap who gave us the original Audi TT), who has produced a decade's worth of distinctive KIA designs, the latest Sportage acquired an all-new look with high-set front headlights and a dominant grille. 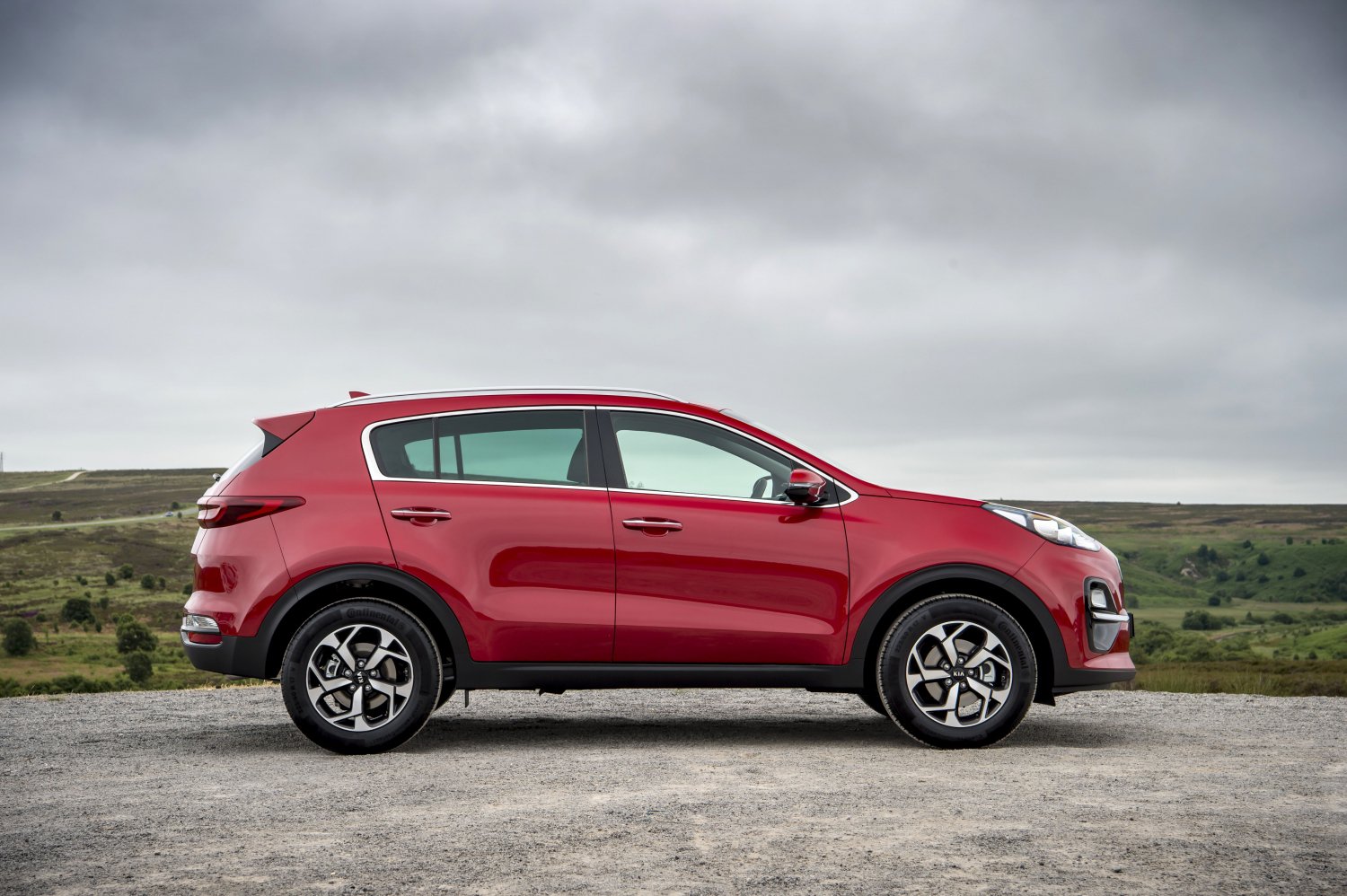 The rear is neat and attractive, but in an attempt to bring the Sportage in line with KIA’s current corporate ‘design language’, the new rendition of the tiger nose grille appears at odds with the rest of the car. However, like with wine tasting, all opinions on styling are subjective and fortunately, in the case of this new Sportage, it in no way negates what is, once again, an all-round excellent car.

The current model's wheelbase was stretched by 30mm and although longer overall (by 40 mm) it retained the same width and height as its predecessor. The result is more rear legroom and slightly longer rear doors. KIA has also lowered the car’s floor pan by 40mm so that it’s easier to get in and out thanks to a correspondingly lower seat height. Climb into the driver’s seat and you’ll find a tasteful interior that, thanks to those dimension changes, offers a bit more room inside. However, that is unlikely to be the first thing you notice…that honour will likely go to the impeccable build quality. It’s a tactile, subjective, indefinable attribute that used to be the preserve of German premium marques. 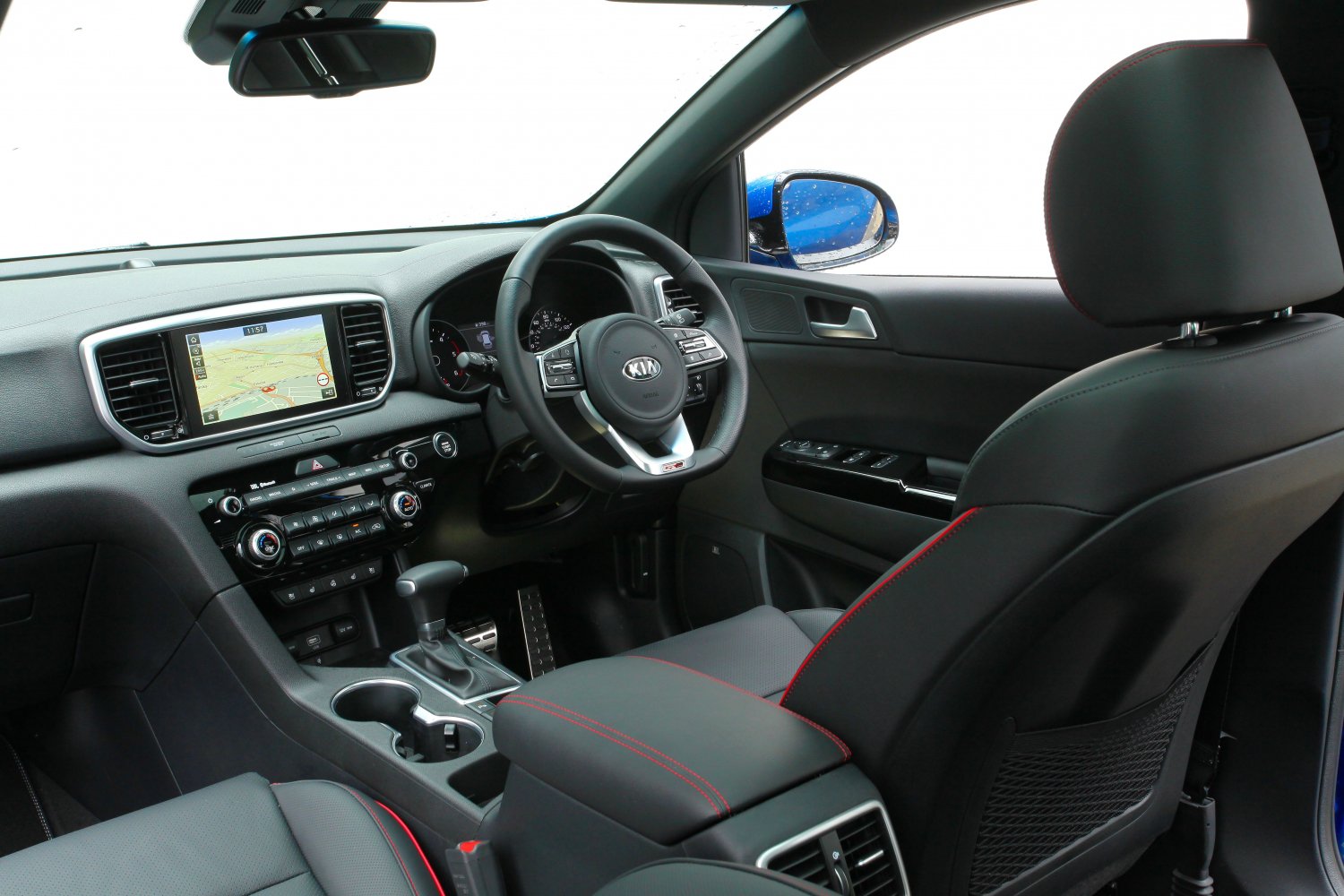 Switches, dials, handles, levers and useable surfaces all feel really – in a word – expensive. It’s only when you look closely lower down the dashboard and the cabin that you find slightly cheaper-looking and more durable plastics, which is standard practice with most auto manufacturers these days. When it comes to practicality, there’s a lot going for this latest Sportage. There’s plenty of head and legroom for adults at the back thanks to the car’s extra length. At 491 litres, the Sportage has an average sized boot for its class, but it’s a good, practical shape and the load lip is low and flat. A nice touch is the large under-boot storage area that can store the removed parcel shelf.

Comfort has taken a significant step forward on the latest Sportage. The ride has become more pliant thanks to a revised suspension set-up, which has allowed KIA to install more supportive seats, and the combination is a good one. 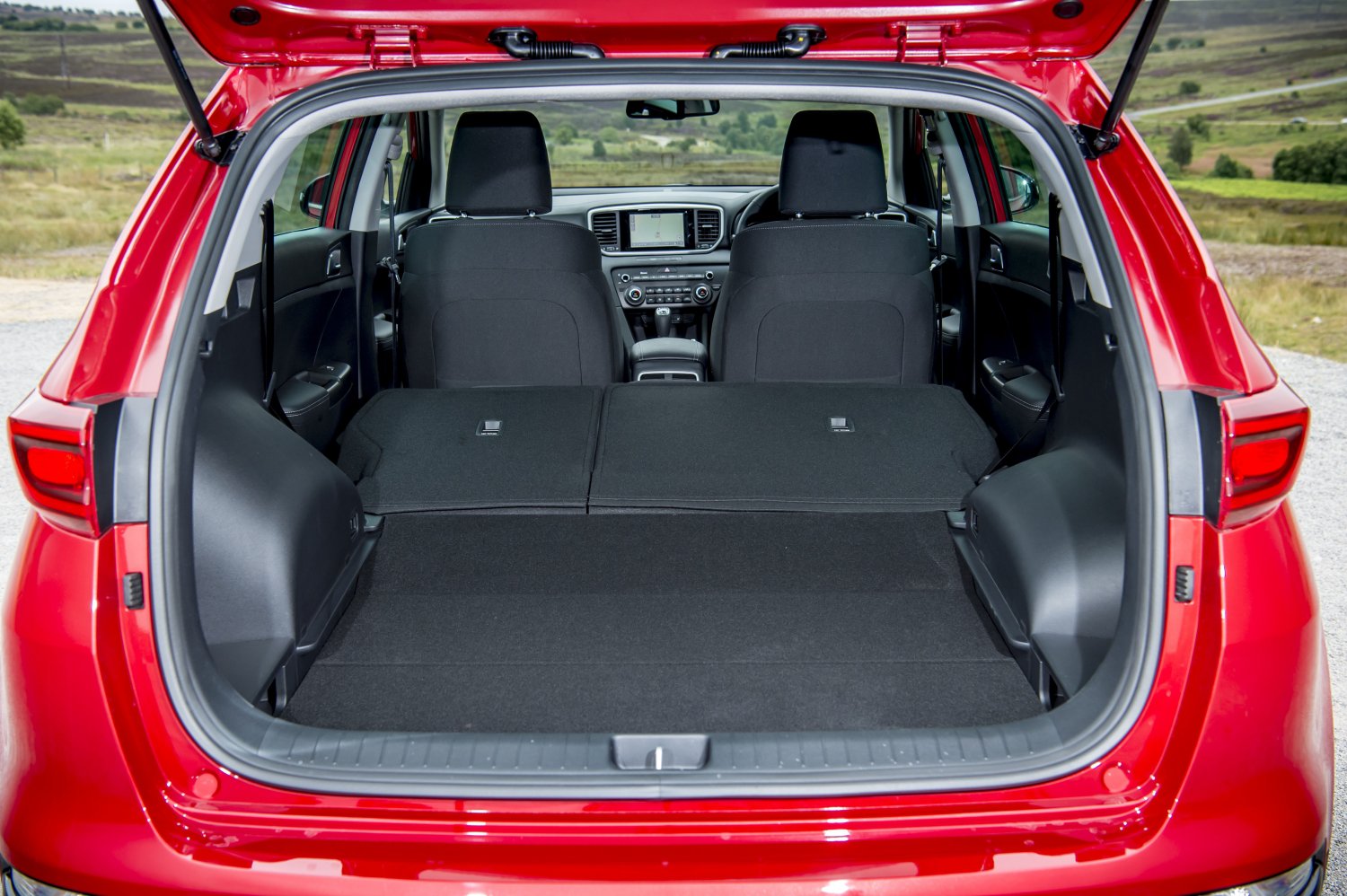 You can fit three people comfortably in the rear and there’s excellent knee room and decent head room despite the sloping roof-line. There are ISOfix points in the two outer seats and one particular feature that marks out the Sportage is its reclining rear seats that offer an extra bit of comfort in the back.

There are currently five trim grades available for the KIA Sportage – 1, 2, 4, GT-Line and GT-Line S – enough to cater for the daily demands of most lifestyles. PETROL: The line-up of petrol engines remains unchanged from the previous Sportage model, though with minor modifications to reduce emissions. There are two petrol engines, both of which are four-cylinder 1.6-litre units and are now fitted with new particulate filters to further reduce emissions, ensuring full compliance with the Euro 6d TEMP emissions standard.

The first, a naturally-aspirated 130hp 1.6-litre GDi engine offers an adequate torque output of 161Nm and CO2 emissions from 162g/km.

The second 1.6-litre petrol engine – a turbocharged T-GDi unit – develops 174hp at 5,500rpm, while maximum torque is 265Nm available from 1,500rpm to 4,500rpm. The result is instantaneous response to throttle inputs and rapid acceleration. It accelerates the Sportage from 0-60mph in 8.9 seconds (2WD manual) or a slightly quicker 8.8 seconds with the AWD 7-speed dual clutch automatic transmission. CO2 emissions for the turbo-charged T-GDi are as low as 173g/km, with fuel economy up to 37.7mpg on the combined cycle. Sportage models equipped with the T-GDi engine are available with either FWD or AWD and a seven-speed DCT on AWD models.

DIESEL: The Sportage’s previous 1.7-litre CRDi diesel engine was replaced with KIA’s efficient 1.6-litre ‘U3’ diesel engine. The new 1.6-litre diesel is available in two states of tune – 114 or 134hp – with emissions rated from 130g/km for 114hp models and 126g/km for higher-powered models.

Driving the front wheels via six-speed manual transmission as standard, the 134bhp models are also available with all-wheel drive and a seven-speed DCT automatic.

MILD HYBRID: The Sportage now offers KIA’s own four-cylinder, 2.0-litre ‘EcoDynamics+’ ‘R’ diesel mild-hybrid powertrain. In the Sportage, the system supplements acceleration with power from a compact 0.44 kWh 48-volt lithium-ion battery and extends engine ‘off time’ with a new mild-hybrid starter-generator unit. It is connected by belt to the engine’s crankshaft, and switches seamlessly between ‘motor’ and ‘generator’ modes.

The EcoDynamics+ powertrain is paired with an all-wheel drive system, transmitting power via a newly-adopted eight-speed automatic transmission. Once on the move, it’s evident that much has been done to improve on-road refinement, which means the Sportage makes for a comfortable way to cover expansive distances. But the differences between the current and the previous Sportage became even clearer when the road turned twisty as the new Sportage proved more taut and surefooted compared with its relatively ponderous predecessor. KIA enhanced refinement by adding plenty of sound deadening and the Sportage is noticeably quieter than the old model at all speeds. Strategically placed rubber bushings mean that fewer vibrations make their way into the cabin and there’s a feeling of precision to the operation of all the car’s controls.

There’s very little noise intrusion to speak of and wind and engine noise aren’t a problem for the most part, although working the turbodiesel hard can proffer up an unpleasant racket which, admittedly, does settle down at the cruise. The car's underpinnings are very well set up and offer a comforting degree of confidence to deploy occasional dabs of enthusiasm on the accelerator. Body roll is minimal and the KIA always feels like it has a good handle on what the road’s throwing at it.

That there was very little wrong with the outgoing Sportage is a measure of quite how far the Korean manufacturer has come in a relatively short space of time. However, the current Sportage seems more in tune with modern consumer demands. It delivers a sportier drive than the old car, yet offers superb refinement and a more forgiving ride quality. A more capacious interior is an obvious win for families, as is the wide choice of engines and transmissions.

Positioned as the gateway model to the Lexus SUV range, is the UX...