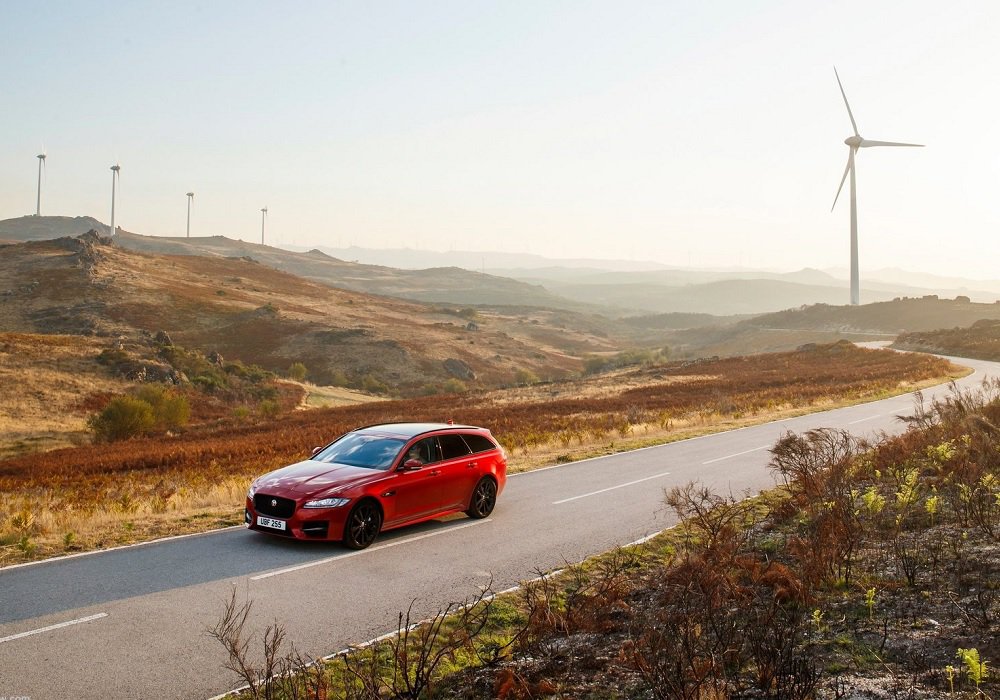 With the deluge of SUVs flooding the market during recent years, the trusty family estate has become less fashionable. But, can the second generation of Jaguar’s XF Sportbrake make a strong enough case for stemming the tide towards posh urban tractors?

More importantly, can it compete with sector monarchs such as the BMW 5 Series Touring, the Mercedes-Benz E-Class or Audi’s new A6 Avant?  I drove it recently to find out… 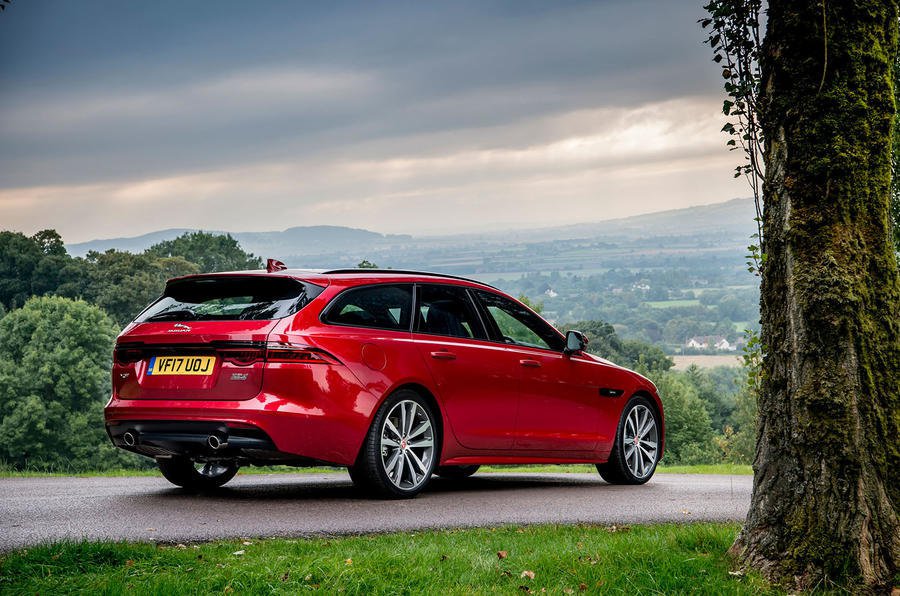 Jaguar says its customers still want an estate and with the XF Sportbrake, you get an XF saloon, but with way more space and a wonderfully swooped side profile.

The design is of course based on Jaguar’s exquisite XF saloon, the latest iteration of which was introduced in 2016. The Sportbrake looks deceptively longer than the saloon (it isn’t) thanks to the swept-back roofline and rear spoiler. The wrap-around LED tail lights are inspired by the F-Pace and give it a broader, more modern look. It makes a statement that estate cars don’t have to look dull and utilitarian. 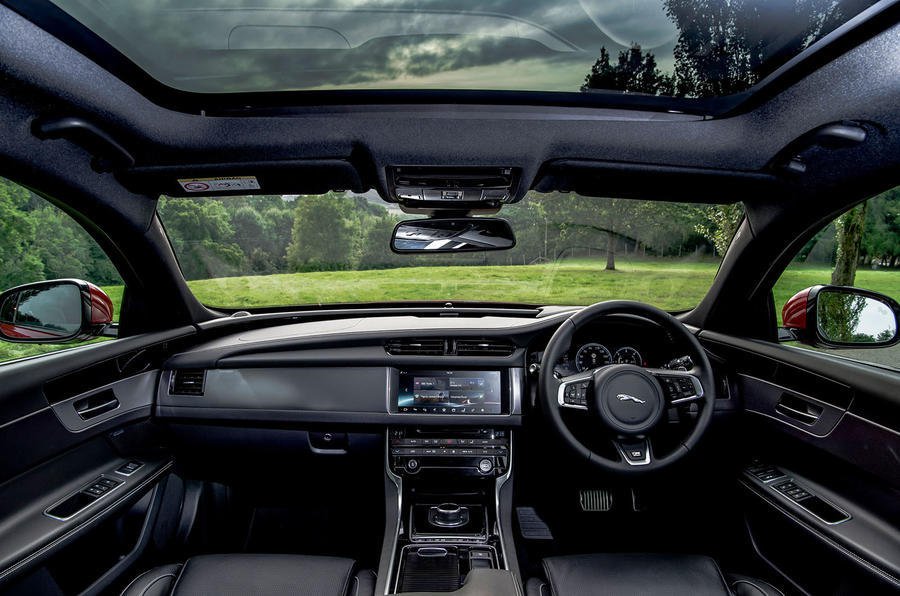 The interior of the XF Sportbrake is what you get in the current XF saloon, which means the latest Jaguar entertainment display and the wrap-around dashboard that skirts the windscreen. Surprisingly, there are one or two areas that look and feel cheap, but on the whole the level of quality is one of class – not BMW or Merc standards, but it isn’t too far removed from the standard set by both of those marques.

As well as a big boot, the sleek XF estate has enough space to transport a family of four in limo-like comfort. Indeed, even entry-level models are kitted out in leather and soft-touch materials, along with smart features such as ambient interior lighting and in-car wifi. 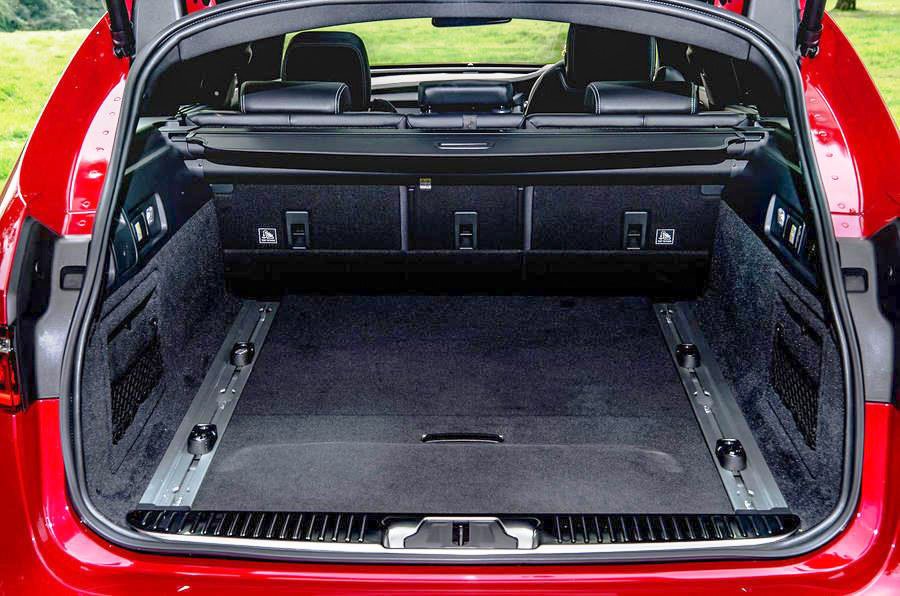 There are two infotainment systems on offer, in 8- and 10-inch screen sizes. They’re both touchscreen and have navigation built-in. The software is easy to use (less complicated than Audi’s MMI interface), but the touchscreen tends to be slow to respond – often taking two to three seconds for each touch to register.

You can also spec your XF Sportbrake with a 12.3-inch digital instrument cluster, which I think makes the cockpit feel a lot more futuristic and can be customised to show various instruments or full screen navigation. 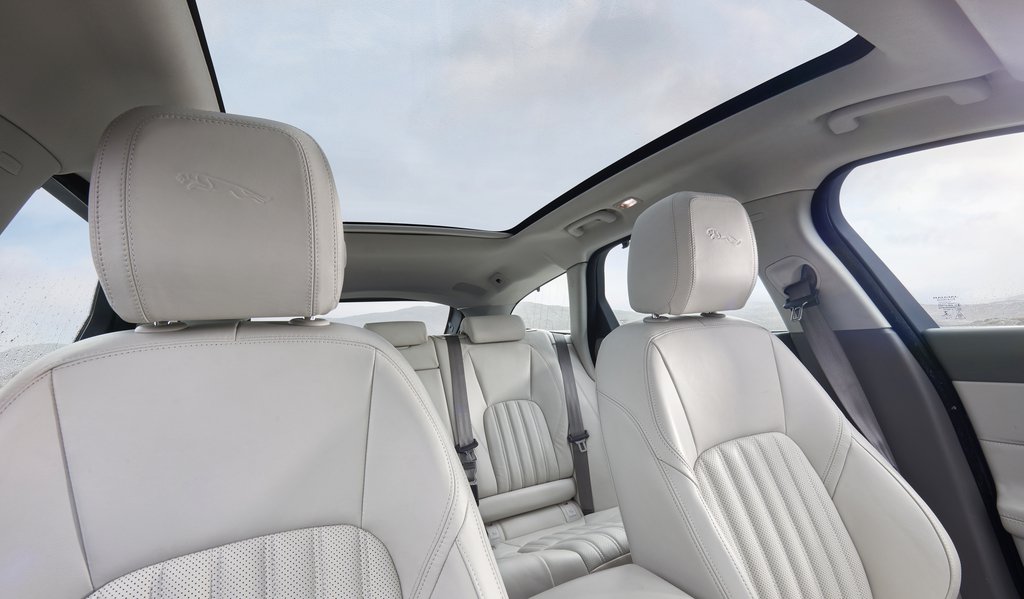 This second-generation XF Sportbrake packs a bigger boot with 565 litres on offer, while 1,700 litres is available by collapsing the rear seats using handles in the boot.

The boot is completely square and flat with no intrusions due to redesigned rear seats, plus there’s no lip to lift objects over and an electronic tailgate that can be operated hands-free. Rear passenger space is also massive even if you tick the panoramic sunroof option. 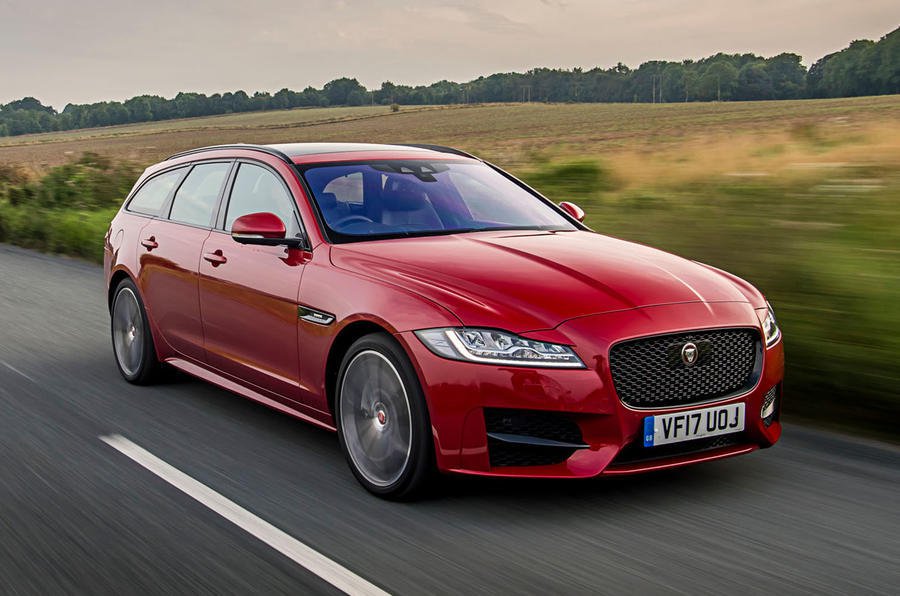 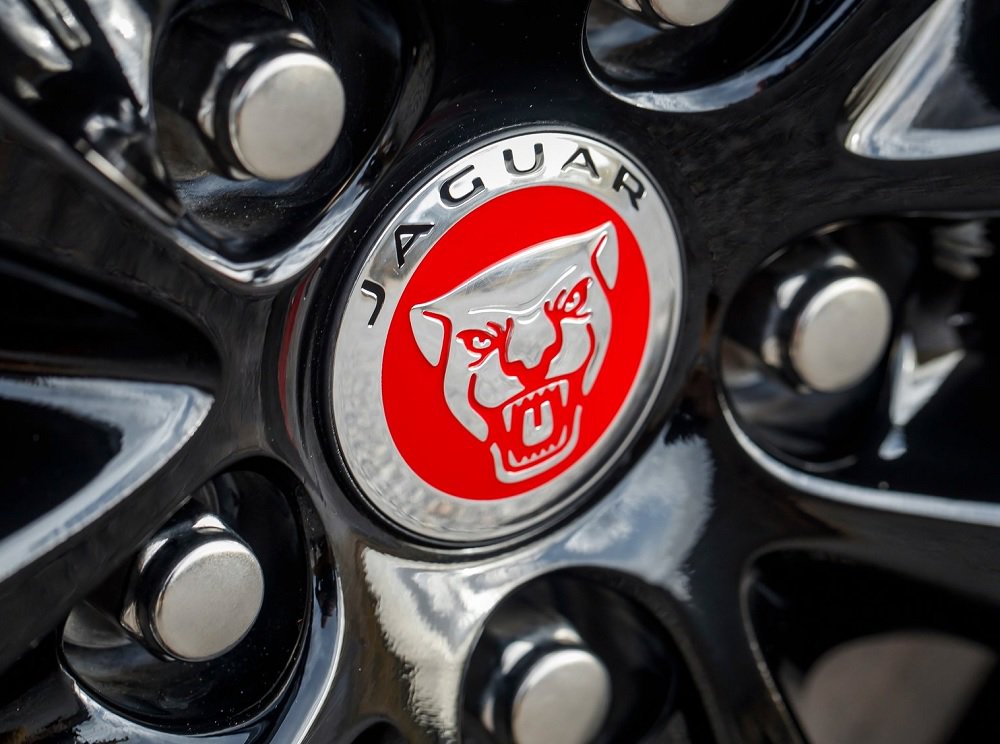 Upgrade to R-Sport and you get a light body kit, 18-inch alloys and leather seats, while S trim (available only with the top 297bhp 3.0-litre diesel engine) adds 19-inch alloy wheels, a sporty body kit with black side sills and a boot spoiler, leather sports seats with 10-way adjustment, keyless entry, adaptive suspension and a reversing camera. Like the previous generation of XF Sportbrake, most buyers will choose diesel and the line-up includes three 2.0-litre engines, plus a performance focused 3.0-litre V6. I would opt for the 180PS diesel - returning an advertised 60.1mpg. Almost all powertrains are linked to rear-wheel drive and an eight-speed auto as standard, although four-wheel drive can be specified. However, petrol buyers might feel a little short-changed with just the one option – a somewhat lethargic 250PS 2.0-litre engine, which is probably best avoided. 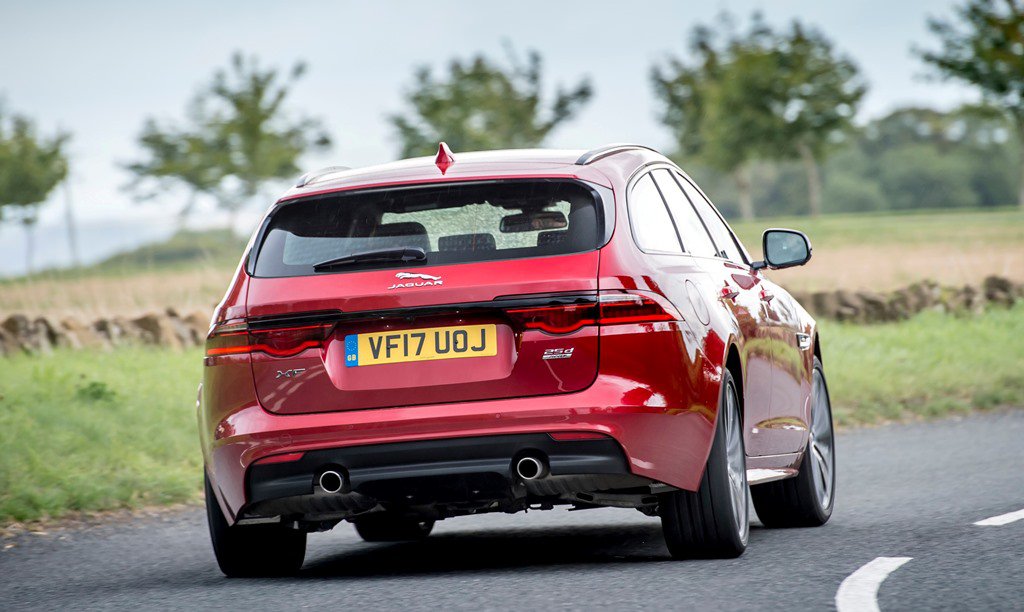 It is easy to forget that you’re driving a five-metre-long estate car. Jaguar makes no bones about the fact that the XF Sportbrake is designed for those who want a large family car with dynamic handling and a comfortable ride quality. It’s a little stiffer but less floaty than a BMW 5-Series Touring and more composed than a Mercedes-Benz E-Class, delivering a comfortable and rewarding drive on all but the most unsettling surfaces.

This means, for the most part, it feels very close to the standard XF saloon on the road, with positive steering and excellent composure at motorway speeds. The car’s handling inspires confidence as it was engineered to drive like the saloon, despite being 115kg heavier, so you get tweaked front suspension and air springs at the rear. 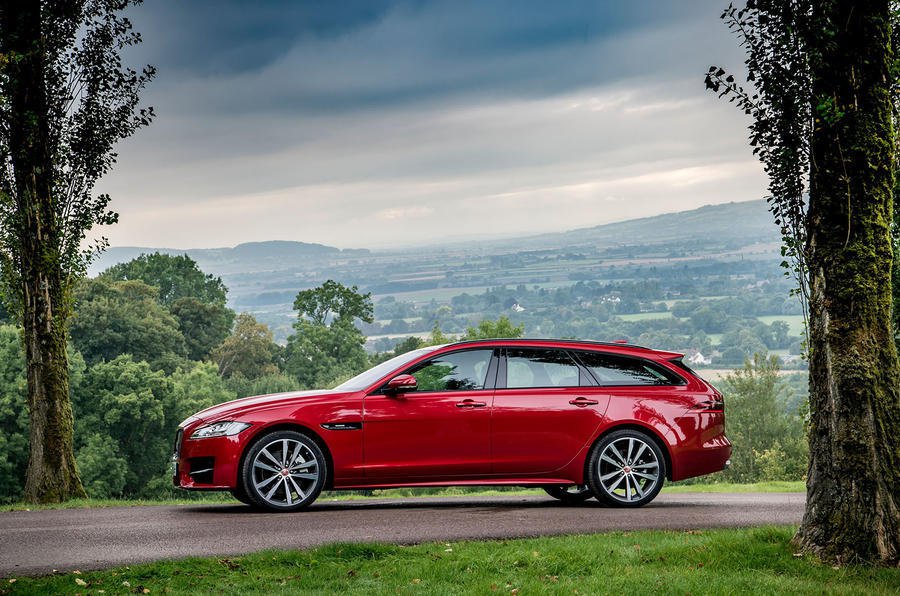 Driver engagement is excellent. Turn into a corner and you’ll instantly know how the Jag is going to behave, where its nose is going to go, how much grip the rear wheels have and how little body lean it’ll exhibit. Uneven roads are effortlessly dealt with, too, but the XF can't quite match the new Volvo V90 or the BMW 5 Series Touring for sheer comfort. The optional Configurable Dynamics package brings adjustable suspension, so you can select a sporty or relaxing ride, or a compromise between the two.

A few areas blot the Sportbrake's report card…the diesels are gruff at start-up and a tad unrefined at low speeds, while the engine stop/start system is coarse in its operation. The Jaguar XF Sportbrake’s combination of a stylish design, XF saloon-like handling and generous interior space makes it ideal for anyone who wants a versatile slice of motoring, especially when served in R-Sport trim. A lack of technological prowess is ultimately outweighed by a satisfying drive (with the right engine) and a genuinely attractive design. It is a driver’s estate – one that will stand out and be remembered.

Hyundai i30 Tourer Review: One for the head, if not the heart

Should Hyundai's updated estate be your next family car?

We went to the Volvo V60 launch to find out if their all new estate...