The Ioniq is Hyundai's first ever production hybrid car – one that has its gun sights locked onto its Japanese rival, the Toyota Prius. Hyundai doesn’t do things by half and the Ioniq is Hyundai’s triple-whammy; it is currently the only car in the world available to order as a hybrid, a plug-in hybrid or a fully electric vehicle. Underneath all three Ioniq versions is the same platform that underpins the rather good Kia Niro, which, with its raised SUV styling, is where the similarity pretty much ends. The hybrid weighs just 1,370kg – thanks to some smart weight-saving in its construction. There’s an aluminium bonnet and boot that shaves off 12.4kg and there’s plenty of additional thin-gauge, ultra-high strength steel to help rigidity.

This trio of efficient Ioniq models is an attempt by Hyundai to appeal to a broad range of budding eco-drivers. Hyundai expects the hybrid derivative of the IONIQ to make up the majority of the trio’s sales, so I decided to take a closer look at it. Not unlike some exteriors, hybrid interior styling can be either mildly oddball or conventional. Hyundai sensibly opts for the latter with a clean and simple look that’s similar to most of its other vehicles – particularly the Tucson. Trim quality is very acceptable with some eye-catching blue trims around the air vents and a neat digital display behind the steering wheel. There’s space to stash small items, while frequently-used features on the climate and infotainment are handled by proper buttons – as they should be on all vehicles to minimize distraction. The Ioniq is comfortable with plenty of seat adjustment to help you find your ideal driving position and there is lots of head and legroom in the front. The same can’t be said for the back seats as, while leg room is quite good, taller adults will struggle for headroom thanks to that sloping roof. The 443-litre boot is slightly larger than the Prius and easily big enough for a baby buggy and some large soft bags. Flip the back seats down and there’s enough room to carry a bike with one wheel removed. The high rear end and low roofline give it a slippery shape, while the big rear window is split by a dividing bar. It’s noticeable in your rear-view mirror, but doesn’t really affect visibility. There are three trim grades with the Ioniq Hybrid: SE, Premium and Premium SE. Standard equipment on the SE is good and includes 15in alloys, a leather-trimmed steering wheel, adjustable lumbar support, dual-zone climate control and a 4.2-inch digital display instead of a conventional speedometer. Also standard are rear parking sensors, a reversing camera, cruise control and a five-inch touchscreen infotainment system. However, you’ll have to pay extra for a Premium model if you want Apple and Android smartphone mirroring and sat nav. Premium SE adds partial leather furniture throughout, front and rear parking sensors, automatic windscreen wipers, a memory function for the driver’s seat and some aluminium trims on the pedals and doors. Less of the plural here as the Ioniq Hybrid has just one engine and drive system available. It is powered by a 104hp, 1.6-litre petrol engine and paired with a 43hp electric motor. Drive to the front wheels is provided – not by a faux, electronically-stepped CVT ‘gearbox’ – but by a conventional six-speed dual-clutch automatic. Hurrah! 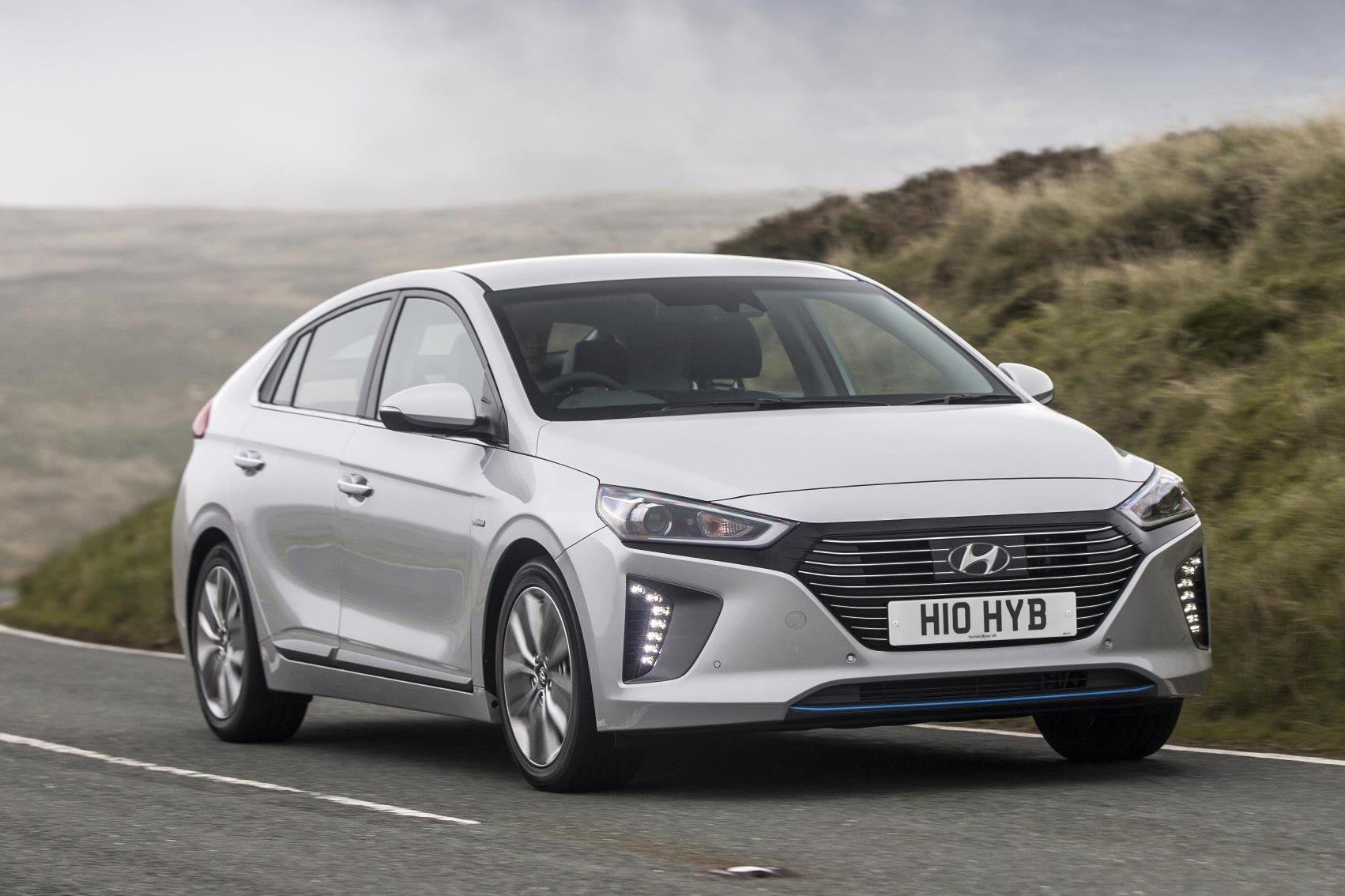 The big benefit is the e-motor’s 170Nm of torque which is available immediately to provide the Ioniq with impressive acceleration from rest. The total system output is 139hp with 265Nm of torque. If you demand everything at once the Ioniq Hybrid will sprint from 0-62mph in a respectable 10.8 seconds.

Official economy is 83.1mpg, with emissions of 79g/km. However, during my week with the Hybrid I travelled 556 miles over mixed roads at an average speed of 41mph and realised 61.6 mpg. Frankly, I would be more than happy with that on a daily basis. On the road, the driving experience feels much like any other automatic car, thanks in whole to the proper automatic ‘box. There’s no droning, lethargy or laziness experienced by most CVTs and the drive has been specifically developed for low friction and optimum economy. 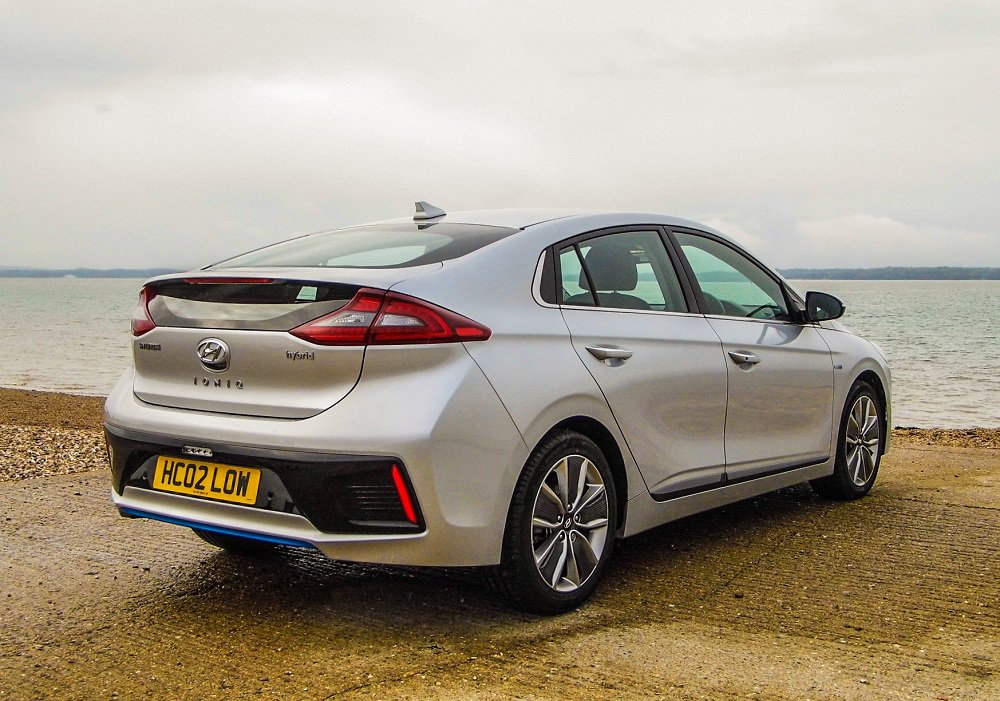 Overall, the Hyundai Ioniq Hybrid has many good things going for it. It is less geeky looking than most of its eco peers, has a handsome, straightforward cabin and a decent level of standard equipment. It makes a compelling case – both private or business – for those seeking low running costs and should catch the eyes of those thinking about making the switch from diesel to hybrid motoring.