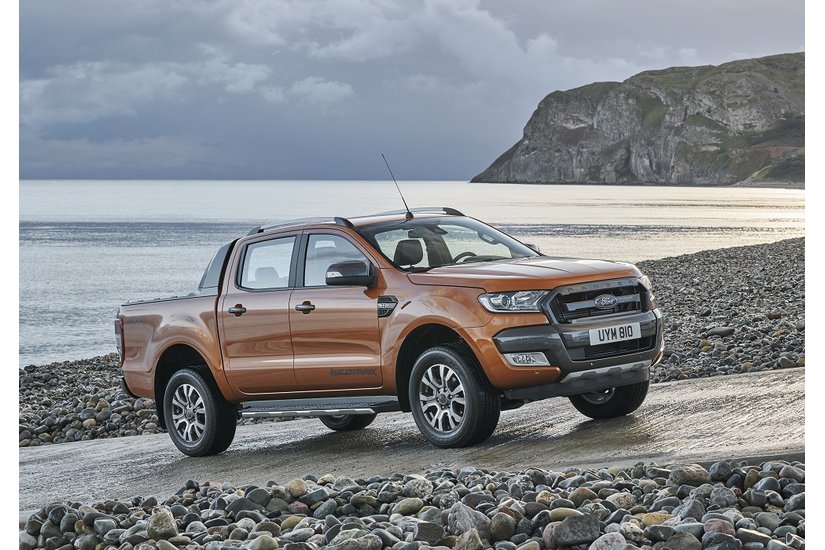 Ford Ranger: The Shire of workhorses

The Ford Ranger is a rugged, one-tonne pick-up that attracts big sales numbers in markets around the world. Here in the UK it’s the number one pick-up in terms of sales and is offered in no-nonsense commercial trim together with higher-end models designed to combine business and lifestyle appeal.

The model has been around in some guise or another since 1998. Before that, it was a re-badged Mazda B Series named the Courier. Second-generation Ranger pick-ups introduced in 2006 were also designed by Mazda, being rebadged versions of the successor to the B-Series, the first generation BT-50.

The current, third-generation Ford Ranger – produced since 2011 – was designed and engineered by Ford Australia and underwent a cross-model refresh in 2016. Its more established UK competitors in an increasingly busy sector include the Isuzu D-MAX, Mitsubishi L200, Nissan Navara and Toyota Hilux, while more recent contenders include the Fiat Fullback, Volkswagen Amarok and Mercedes-Benz X-Class. 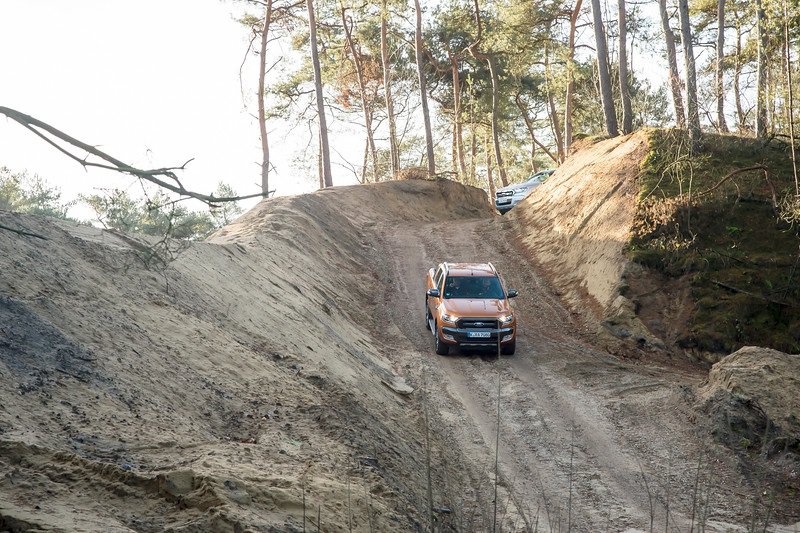 The 2016 refresh gave the Ranger its new Ford ‘family’ grille more closely aligned to the Edge and Kuga SUVs. At the same time a remodeled interior was introduced with the latest navigation and infotainment systems added to higher trim models.

Unchanged was the choice of three body configurations on offer: a range-entry two-door Regular Cab and the Super Cab with additional rear-hinged doors accessing second-row seating, both of which are targeted primarily at commercial users. However, the spacious and more popular Double Cab is designed for  dual-purpose use as family transport at the weekend. 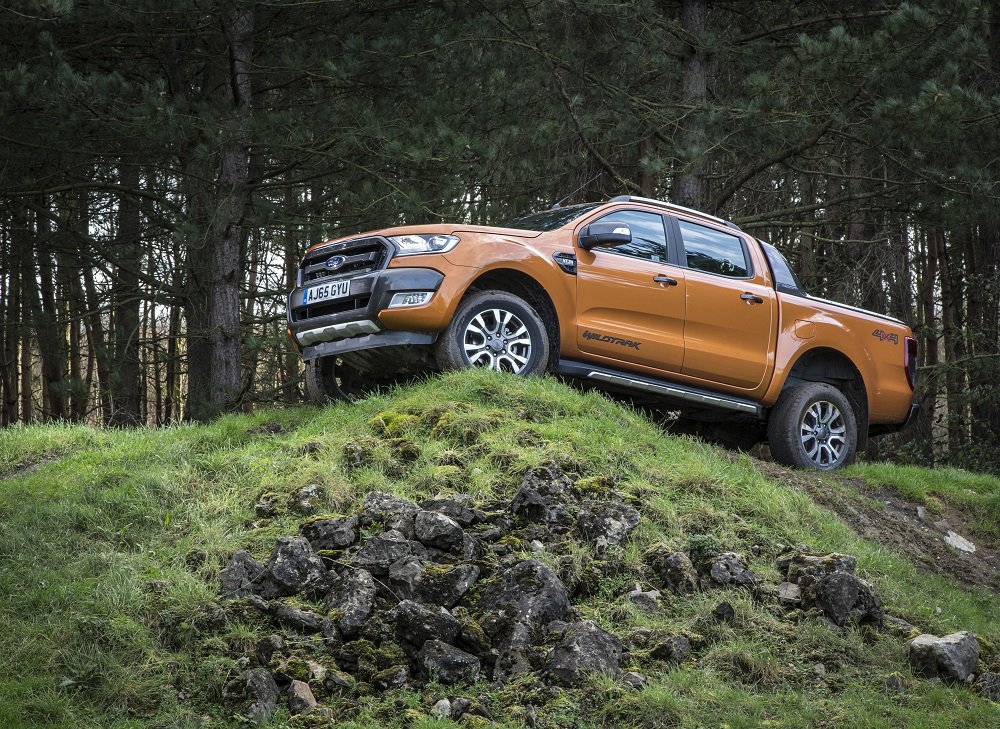 Pick-ups are generally built as tough workhorses and the Ford Ranger is no different. Instead of the tactile, more attractive materials you’ll find in an SUV, the emphasis is on longevity and durability.

In deference to its core purpose, the plastics and detailing aren't quite as upmarket as the class-leading interior finish of the Volkswagen Amarok and Mercedes X-Class, but is noticeably nicer than those of most rivals and feels durable and well-designed.

Thanks to range of adjustments, drivers shouldn't have any issue finding a good driving position, but the seats could do with more side support, which is more noticed when venturing off-road. Still, there's plenty of space inside, and it's free from rattles and squeaks. 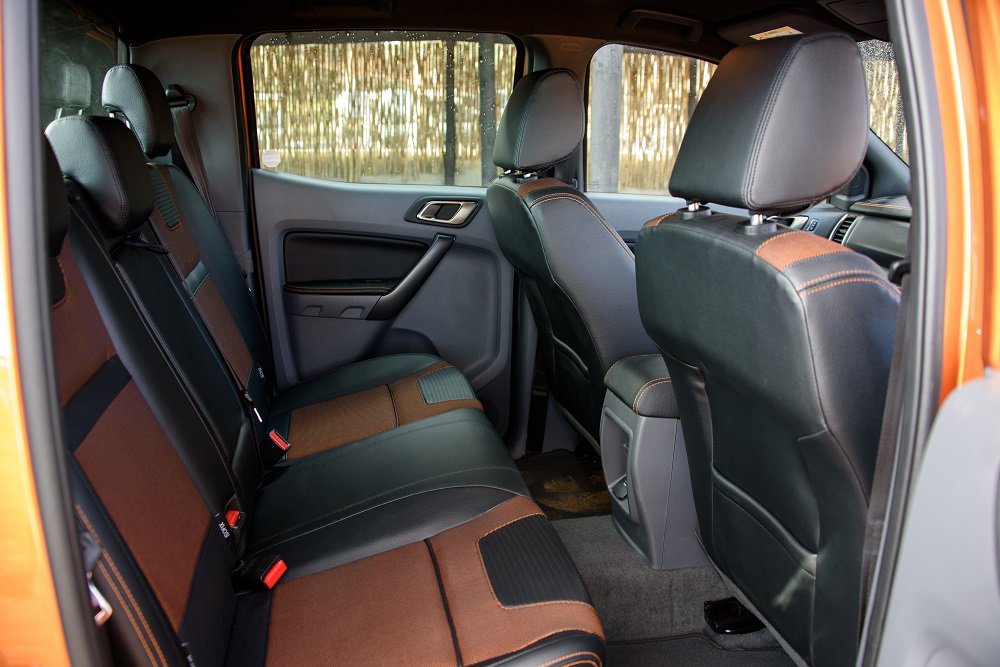 On the dashboard, you’ll find the same style of buttons and switches used in Ford’s passenger-car range, which feel well built and are easy to use. The Ranger also has a digital instrument display, which allows you to see a variety of different information.

There are a variety of storage pockets and cubbyholes, including a large centre console bin. Visibility is good thanks to large door mirrors, but care must still be taken when parking such a sizeable beastie. 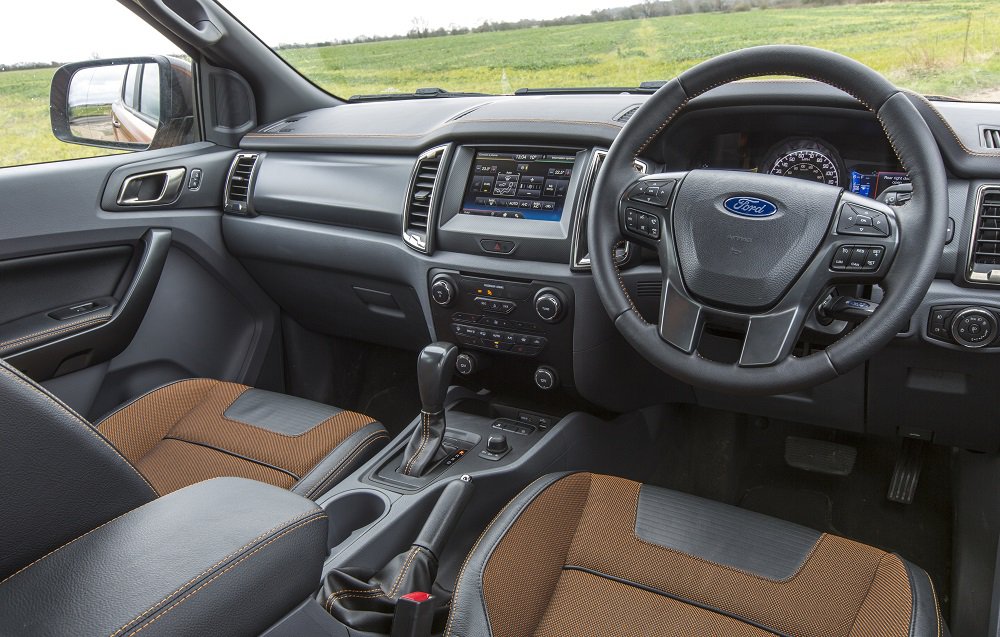 All Ford Ranger models are equipped with a suite of grip and stability-enhancing electronic systems, as well as hill-start assist to prevent the vehicle rolling back when you’re pulling away, hill-descent control to limit off-road downhill speeds and trailer sway control that restores control of a trailer that’s started to weave while being towed.

The range-entry and rather utilitarian XL has a short list of standard equipment compared to passenger cars, but highlights include Ford’s quite clever EasyFuel system (which prevents you filling up with petrol by mistake), tinted glass, electric door mirrors, a heated windscreen, Bluetooth connectivity, DAB digital radio and a height-adjustable driver’s seat. 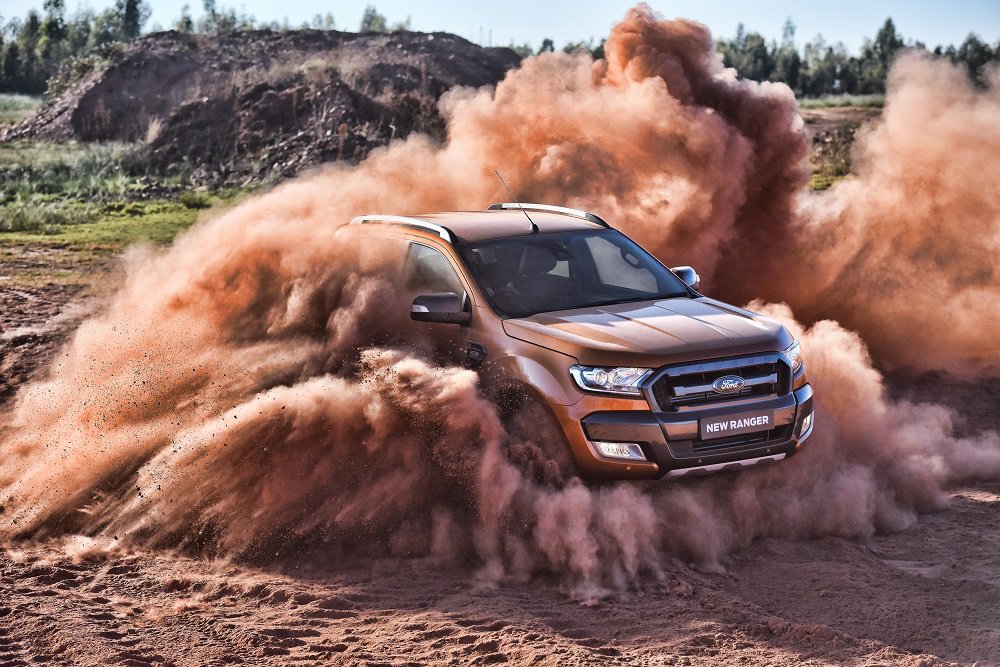 The Limited model leans towards the luxury arena and offers kit such as dual-zone air-conditioning, rear parking sensors, power-operated leather seats and Ford’s SYNC 2 infotainment system with an 8-inch colour screen and is distinguished outside by privacy glass and chrome rear bumpers.

The distinctive Wildtrak model adds roof rails, 18-inch alloy wheels, a rear parking camera and navigation, but comes only with the 3.2-litre engine. The aggressive Wildtrak X special edition gets Performance Blue paint usually reserved for the brand’s ST models and black exterior trim to give it an even tougher appearance. Inside, there’s black full-leather upholstery with contrasting grey stitching.

The recently-introduced Black Edition Ford Ranger is based on the Limited trim and has a menacing presence with its ‘Shadow Black’ exterior paint, black 17-inch alloys plus a host of black-finished trims and black leather interior. 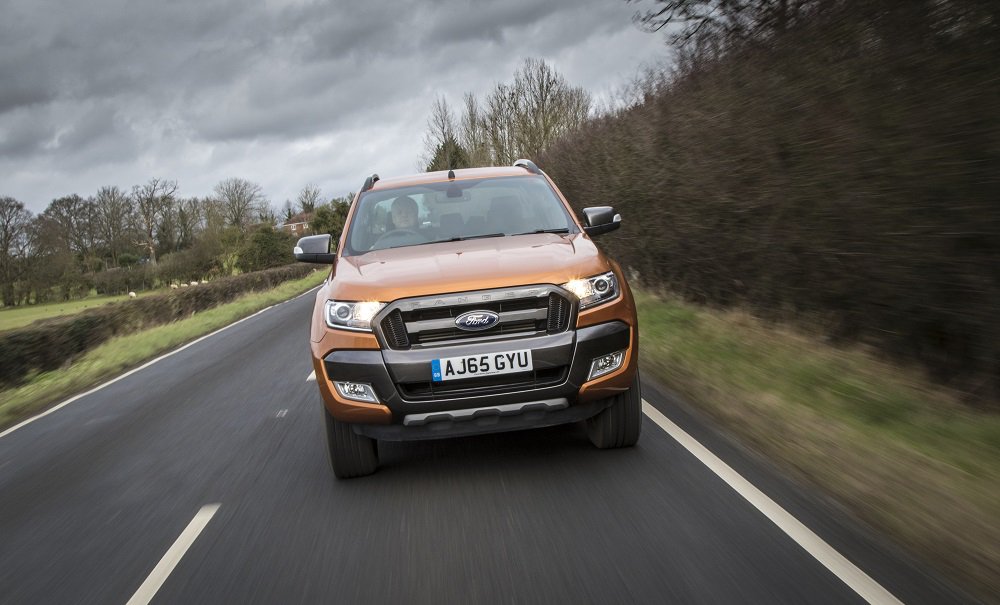 There is currently no petrol-engined version of the Ranger, with Ford opting to remain with two turbocharged diesel engines – a four-cylinder 2.2-litre and a five-cylinder 3.2-litre. The majority of buyers will opt for the 2.2-litre powerplant as it offers more than enough power for most people’s needs and will appeal to the thriftiest of bean counters.

With 158hp the 2.2-litre Ranger is pretty adept at towing, and even better if you choose the lower axle ratio option. With this engine, most Rangers will achieve 0-62mph in a little less than 12 seconds, although the 3.73 final-drive and an automatic gearbox ups this to 13 seconds. The two-wheel drive model is the slowest from 0-62mph at 11.5 seconds, while the fastest is the automatic 3.2-litre model, at 10.6 seconds.

The higher power output of the 197bhp, 3.2-litre, five-cylinder turbo diesel makes itself apparent when pulling away – the Ranger feels quite potent if not overly refined.

All Ford Rangers come with a standard six-speed manual gearbox, which has a pleasantly short and accurate action. Higher-specification models can be had with a competent but thirsty six-speed automatic.

The 2.2-litre versions are available with two- or four-wheel drive, while all 3.2-litre models come with four-wheel drive. Drive modes can be switched on the fly up to moderate speeds, with just the twist of a dial.

Although its towing capacity isn’t any higher than the 3,500kg limit of the 2.2-litre, the 3.2-litre Ranger affords a greater sense of confidence. It’s not a lot quieter than the smaller engine, though, and can be quite chatty when cold. 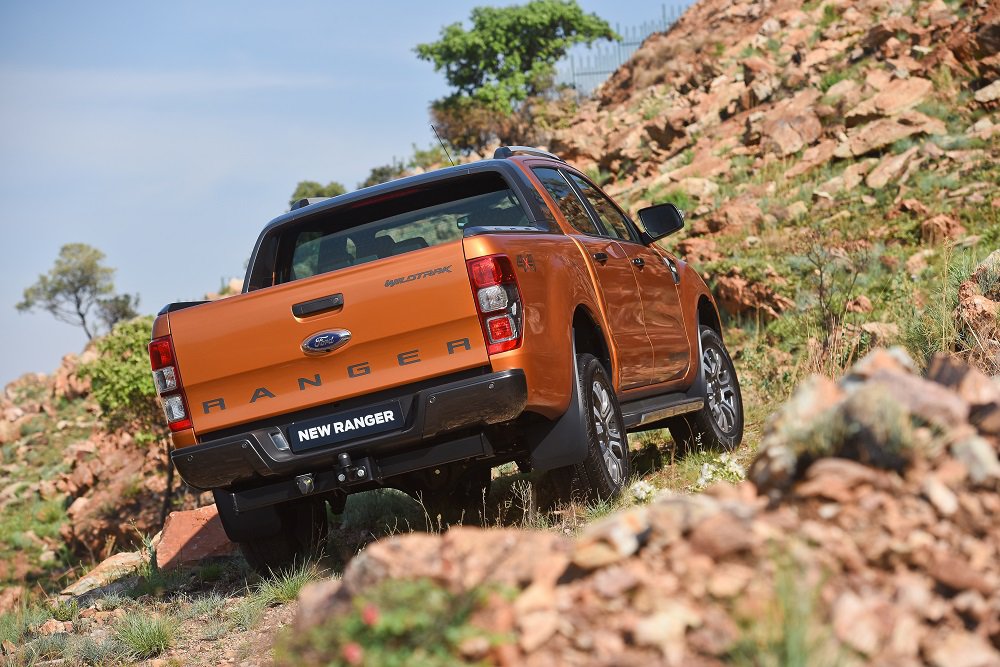 Depending on your business or lifestyle requirements, there’s no getting away from the need to compromise on either passenger space or load capacity.

The Regular Cab only has two doors and two seats, but offers an expansive 2.3-metre-long load bed with a maximum capacity of 1,300kg, depending on your engine choice. The larger four-door, five-seat Double Cab obviously has more space for passengers, but reduces load-bed length to 1.5 metres and payload to a maximum of 1,220kg.

The Ranger's tailgate folds flat, but is 835mm off the ground on four-wheel-drive models, which can make loading heavy items challenging without the use of ramps or a forklift. 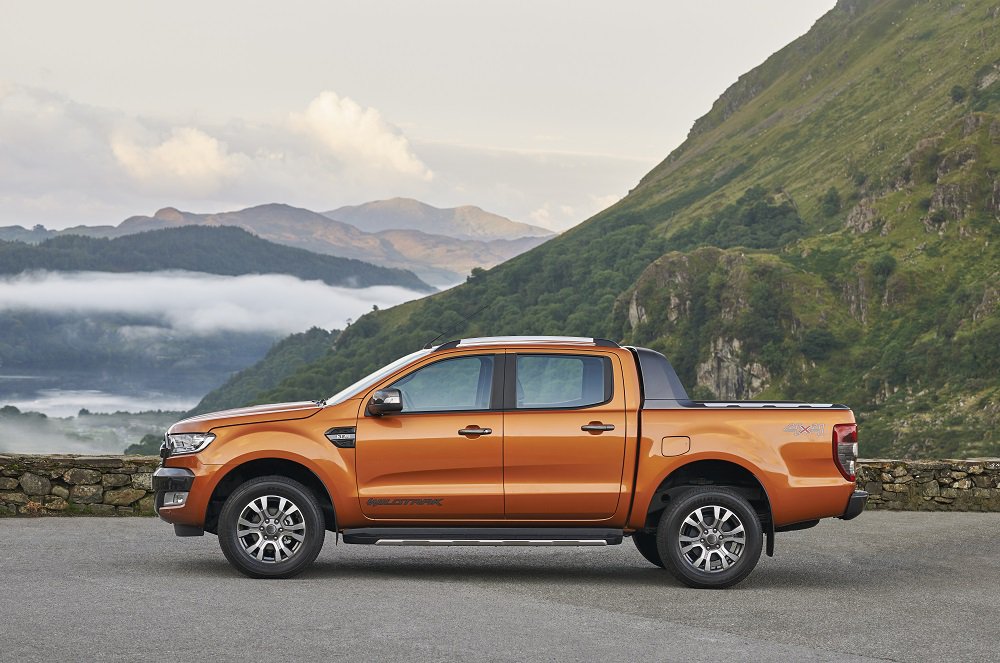 In 2012, the Ford Ranger was the first pickup to achieve the maximum five-star EuroNCAP rating, with an excellent 96% score for adult occupant protection and an equally notable 86% rating for child occupant protection. Not many other pickups have been tested, but the Isuzu D-Max, Mitsubishi L200 and Nissan Navara all currently hold four stars.

Seven airbags and electronic stability control are fitted as standard, while Double Cab models also get childproof rear door locks and ISOFIX child-seat mounts. All models are fitted with tyre-pressure monitoring with the exception of the entry-level XL model where it’s an optional extra. 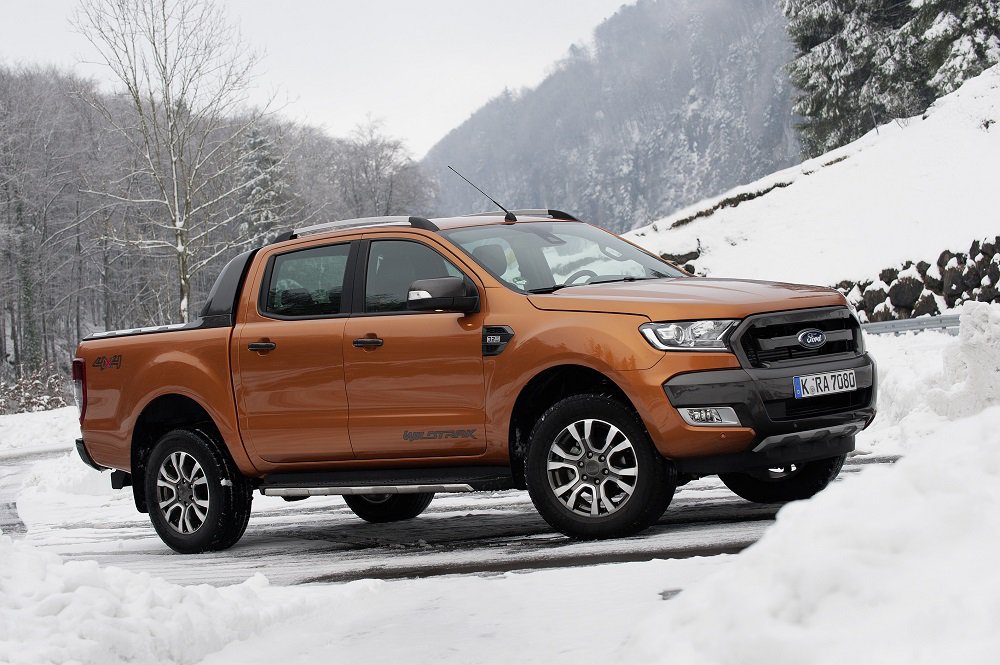 Despite what the respective brand marketing guru’s will tell you, no current pick-up in the UK market drives like a car – no matter how sophisticated the rear suspension is engineered. Some merely drive and handle better than others…and the Ford Ranger is one such pick-up.

The Ranger drives and steers very well and is one of the best vehicles of its type to drive. Of course, like any pick-up, the Ranger has been built with hauling loads in mind, so it'll always be a compromise on the road.

The stiff rear suspension has been designed to support more than a tonne in the load bed, or tow a trailer weighing up to 3,500kg. Unladen, the Ranger bounces and bobs along, but offers a better more pliant ride when there’s some weight over the rear axle.

The Ranger is surprisingly fun to drive along a country lane, as well as easier to live with in town, although it does pitch and lean in corners, with a slightly unsettled feel that discourages drivers from being too enthusiastic. On a roundabout test, grip levels were found to be exceptional.

Four-wheel-drive versions are highly capable off-road, with technology to make driving down steep slopes safer. Impressively, most four-wheel-drive models allow you to switch between two and four-wheel drive by turning a dial on the centre console. There’s a low-range option for extra off-road prowess or if you intend to make use of the 800mm wading depth 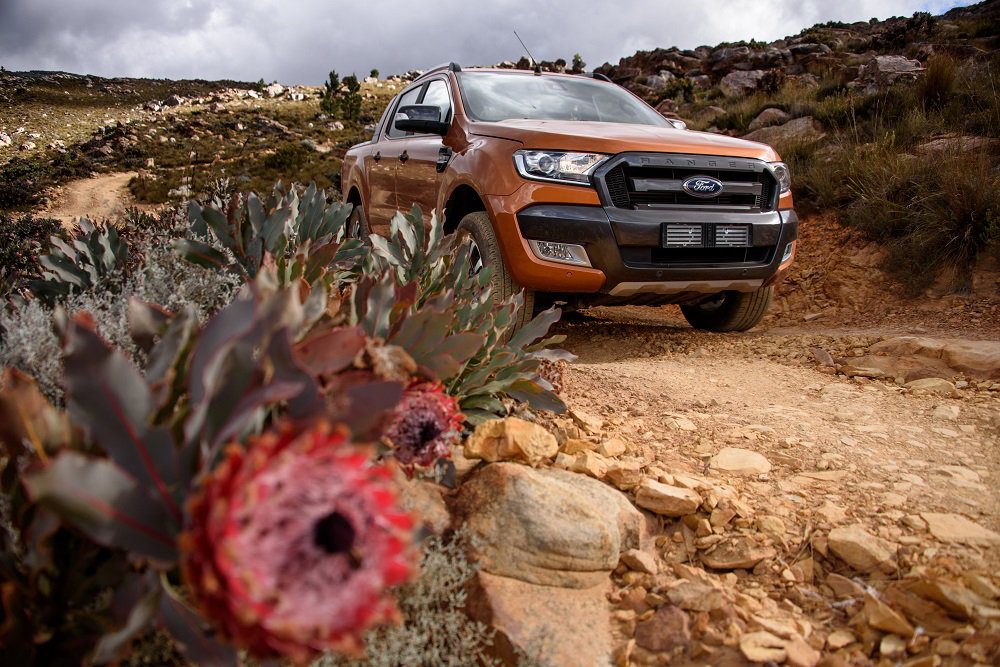 It’s a testament to the growth experienced in the pick-up sector over recent years that it’s not only builders and workmen who love a good pick-up. The Ford Ranger is one of a growing band of sturdy models that combine pickup toughness with a touch of luxury – yet still undercut similarly sized SUVs in terms of price.

The Ford Ranger is a hugely capable workhorse and high-spec versions make a real alternative to conventional SUVs and will suit those with an active lifestyle. Furthermore, it’ll show its true mettle when you ask it to cross tricky terrain, haul a heavy trailer or cope in rough weather.

It’s Blue’s, Two’s, greens and browns for the Ford Ranger Raptor as it...

Are looking for a powerful, capable vehicle that can handle anything?...

This week the Commercial Vehicle Show rolled in to town and we spent t...