Ford EcoSport Review: Now a contender, but is it too late?

The Fiesta-based EcoSport subcompact SUV was originally designed to inexpensively service Ford’s emerging markets in Asia, South America and Russia, where price is usually the prime factor in car choice. Built at facilities in Brazil, India, China and Thailand, the car is manufactured under tight budgetary control to meet developing market criteria.

Indian-built EcoSport models were introduced to the UK/EU market in 2013 in a quick-fire attempt to capture a slice of runaway SUV growth at the time. However, Ford’s first truly ‘world car’ was panned by motoring media across the region, as the car failed to meet the more gnostic tastes of established UK and EU markets. Regional first year sales of just 11,000 units were dire compared to the 100,000+ unit sales for some rival models.

Eighteen months on, smarting and armed with a learning curve that more closely resembled a paper clip, Ford urgently gave the EU-bound EcoSport model a thorough makeover, eschewing the polarising rear-mounted spare wheel in favour of an inflation kit, enhancing the kit lists, improving interior quality and re-jigging the suspension to better suit the UKs crumbling road conditions. It was better, but only just. More importantly, sales began to improve.

For its 2018 model year, Ford has moved production of UK/EU EcoSport models from India to Romania and given the EcoSport chunkier exterior styling, an all-new interior more closely aligned to the Fiesta in design and quality, a new diesel engine and the option of four-wheel drive.

Has the little SUV missed the subcompact SUV party, or do the latest upgrades enable the Ford EcoSport to carry the fight to newer and impressive rivals such as the Hyundai Kona, SEAT Arona or the Volkswagen T-Roc? Recently, I spent a week with the EcoSport and the improvements are notable. 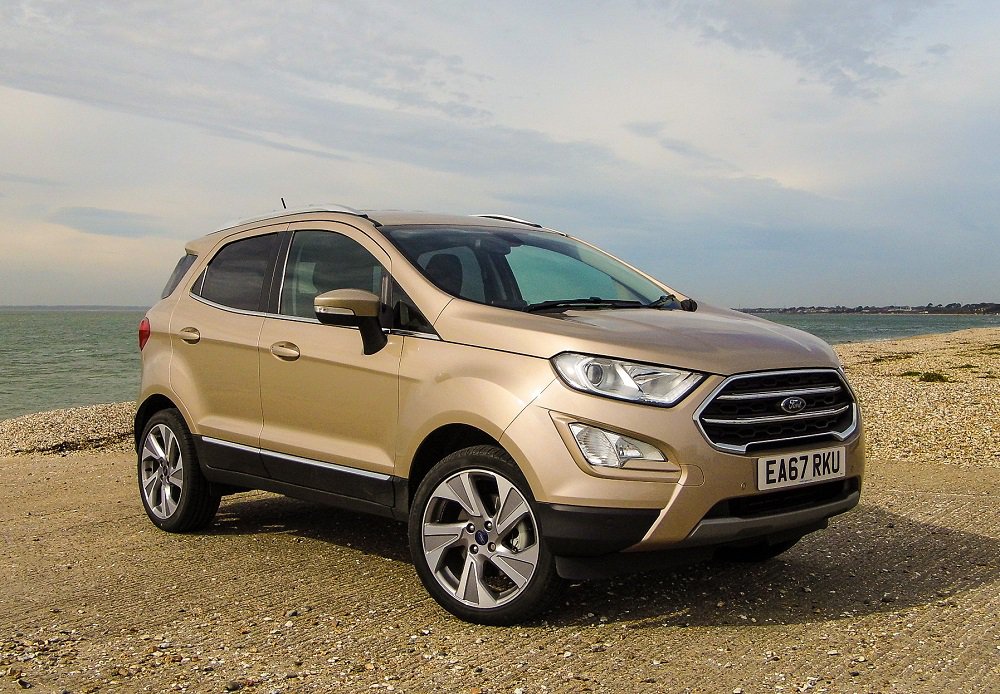 Let’s face it, Ford’s design studio have penned prettier SUVs. The 2018 EcoSport is now a little easier on the eye but the disproportionate body styling still looks a little awkward. Riding high as it does, it remains a bit too tall, a bit too narrow and quite dumpy at the back. However, its looks do grow on you over time and some observers even said it looked cute.

The latest updates include contemporary new frontal styling more in keeping with its Kuga and Edge stablemates and, thanks to a new ST-Line trim level, the EcoSport now offers increased personalisation options. Choose it and you get a default black (or no-cost optional white) contrasting roof and can pick from nine body colours that help your EcoSport stand out from the crowd.

The rear swing door, hinged on the left thus opening the wrong way for UK buyers, remains the elephant in the room. Ford says it would be too expensive to re-engineer for ‘smaller, right-hand-drive markets such as the UK’. With its origins purporting to be a ‘world car’, the rear door should originally have been hinged at its roofline to open hatch-like upwards and more practically cater for ALL the global markets in which it is sold. 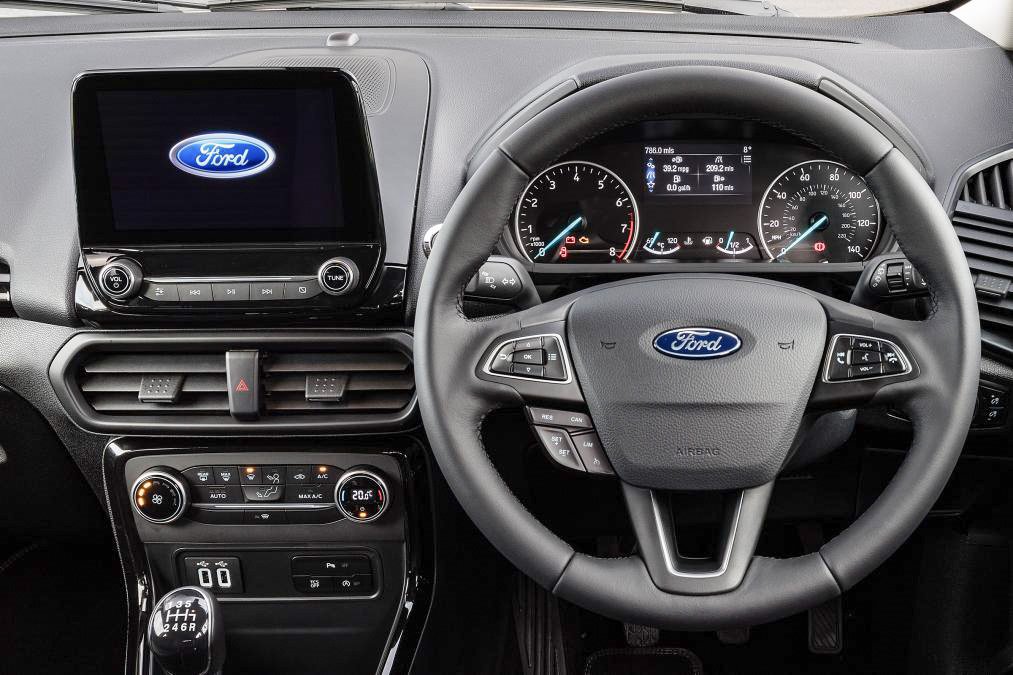 Stepping into the updated EcoSport is a more satisfying experience as the cabin, now more Fiesta-like in design and quality, is better thought out and more welcoming. Notably improved are the EcoSport’s seats which are more comfortable than before although the driver’s seat could offer more side support on the squab, the absence of which is noticeable when enthusing through the twisty bits. The boot, at just 334 litres is a little less than class standard, but the rear seat upright has a practical 60/40 split and, via a flip and fold mechanism, transforms to an almost flat load area at which point luggage space increases to a more useful 1,238 litres. The entire rear bench can also tumble forward to make room for taller objects.

Personal space in all seats is adequate but, being based on the little Fiesta, the narrow proportions of the EcoSport limit shoulder room for all occupants, but which is more noticeable in row two where realistically only two adults would enjoy a degree of comfort during longer journeys. The three-step EcoSport grade walk begins with the Zetec, progressing to Titanium and the newly-introduced ST-Line. 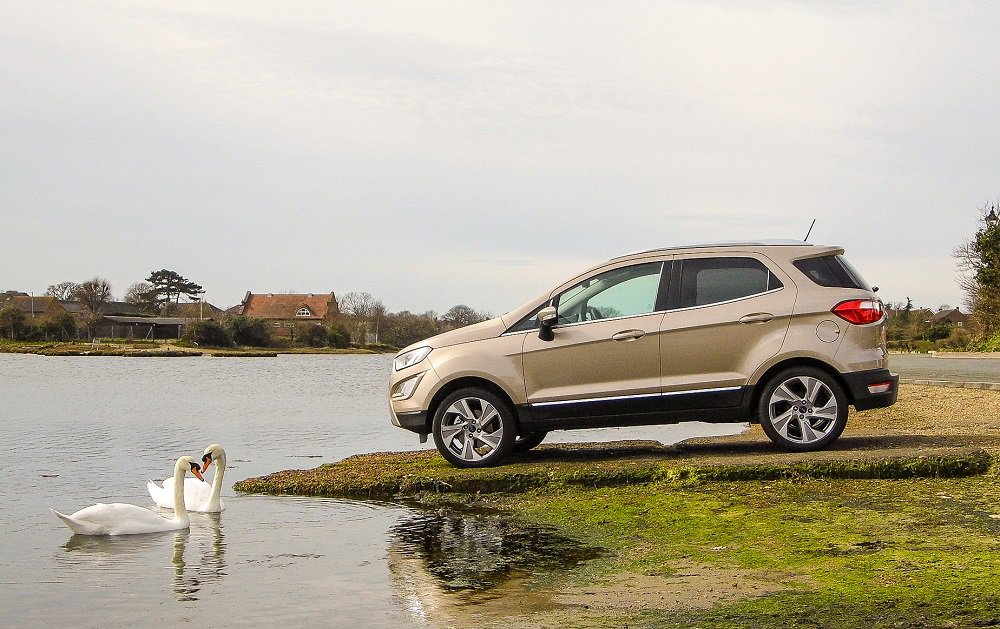 For now, there are two familiar three-cylinder, 1.0-litre EcoBoost (turbocharged) petrols offering 123 and 138hp and a rather lacklustre 99hp 1.5-litre TDCi diesel.

This month, the EcoBoost engine line-up is joined by a third, range-entry 99hp unit and a new 1.5-litre EcoBlue diesel with 123hp, plus Ford’s Intelligent AWD system joined the range as options on Titanium and ST-Line cars. The ‘always-on’ i-AWD system continually monitors the driving surface and optimises traction by directing power to whichever wheel requires it at any given time.

I recently tested the 123hp/170Nm engine paired with the six-speed automatic with paddle shifters for manual override. If you’re fond of automatics, it performs particularly well on a car of this nature, as long as you’re not in a rush at any point during the journey. It has smooth barely perceptible shifts but audibly protests when you ask too much of it. I would prefer the controlled weight and swifter changes of Ford’s good six-speed manual gearbox though.

When paired with the manual ‘box, Ford’s little triple-pot is a very pleasant engine, with good throttle response and a sonorous soundtrack characteristic of latter-day three-cylinder engines and it revs willingly when you do need to press on. 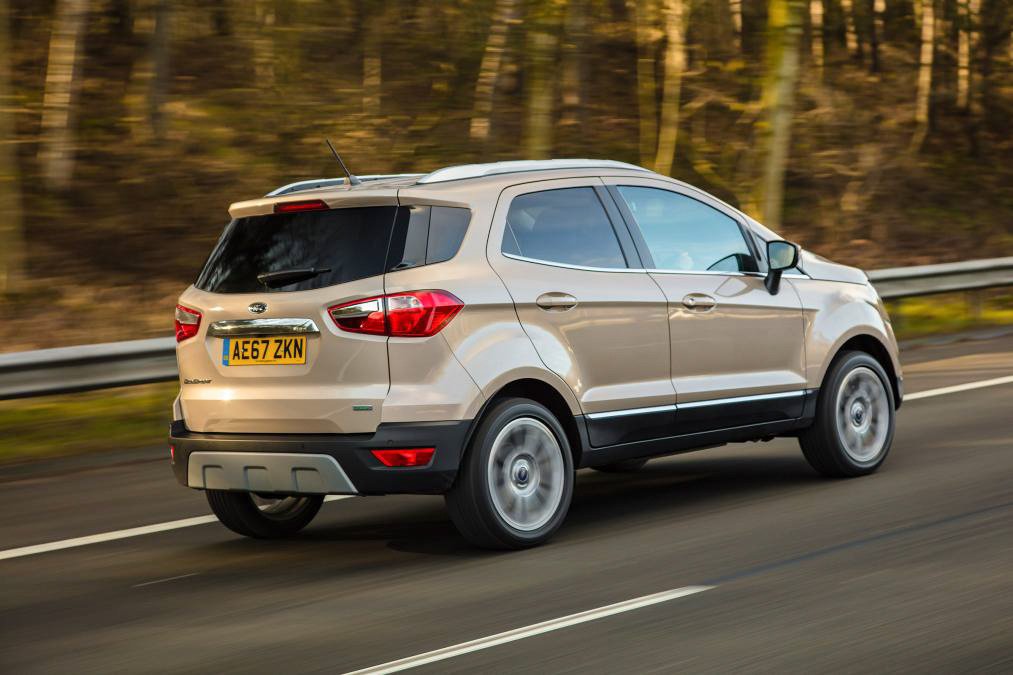 When a car rides as high as the EcoSport, it would be unreasonable to expect pin-sharp handling and rail-like cornering – even if it IS based on one of the best driving cars in its class.

It’s not all negative though, as the EcoSport handles an awful lot better than it used to and, for a taller car has acceptable cornering ability with controlled body roll and grip levels that extend further than one would expect. Ford’s suspension and chassis engineers have done a remarkable job in significantly improving the car’s dynamics for our market.

Due to a light steering setup, the EcoSport can feel a little vague around the dead ahead and those high, slabby sides allow troublesome side winds or passing trucks to influence progress, but overall it’s a reasonable inter-city car that by-and-large, lends itself to settled and secure progress on the motorway. The official mpg average for the 1.0-litre EcoBoost engine paired with the six-speed automatic ‘box is 48.7mpg on the combined cycle. During the test week which included the usual mix of A- and keenly-driven B-roads along with the occasional motorway cruise, I drove 414 miles and attained an average of 36.1mpg – with no attempt at frugality. That’s a significant 36 per cent less than the official figure. CO2 emissions are recorded at 134g/km, which, for an automatic is about fair. The recent updates and improvements to the Ford EcoSport are tangible and it feels and drives well enough for the daily commute or the occasional motorway jaunt. It shines with the features and accessories on offer across its trim grades and fuel efficiency and emissions are at an acceptable level which translates into lower running costs with the multiple award-winning EcoBoost engine.

After two inauspicious starts, the EcoSport has evolved into a decent and competitive effort from Ford and, while it doesn’t break any new ground, it fills an exploitable hole in Ford’s showrooms.

However, should potential EcoSport buyers have previously wandered into a Hyundai Kona, SEAT Arona, Mazda CX-3 or Volkswagen T-Roc showroom, then the working day in the Ford EcoSport showroom may well become a little more challenging.

Compared to similarly priced alternatives, the Citroen C5 Aircross is...