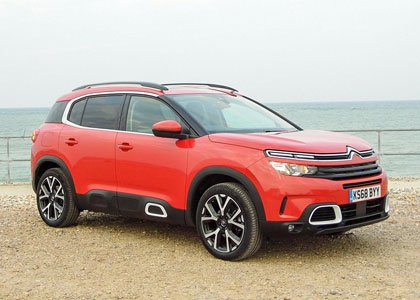 It started two years ago with the C3 Aircross. It was the French marque’s first latter day introduction of ‘Citroen Advanced Comfort’ (CAC), an initiative behind Citroen’s desire to return to super comfortable, soft riding cars of good ol’ yore.

Today, CAC is meant to provide ‘a stress-free travel environment, a simplified interior habitability, a seamless lifestyle fit and afford a sense of inner calm’, say Citroen. The CAC initiative also addresses overall refinement, chassis building and of course, suspension components in order to make what are becoming the world’s comfiest range of cars. 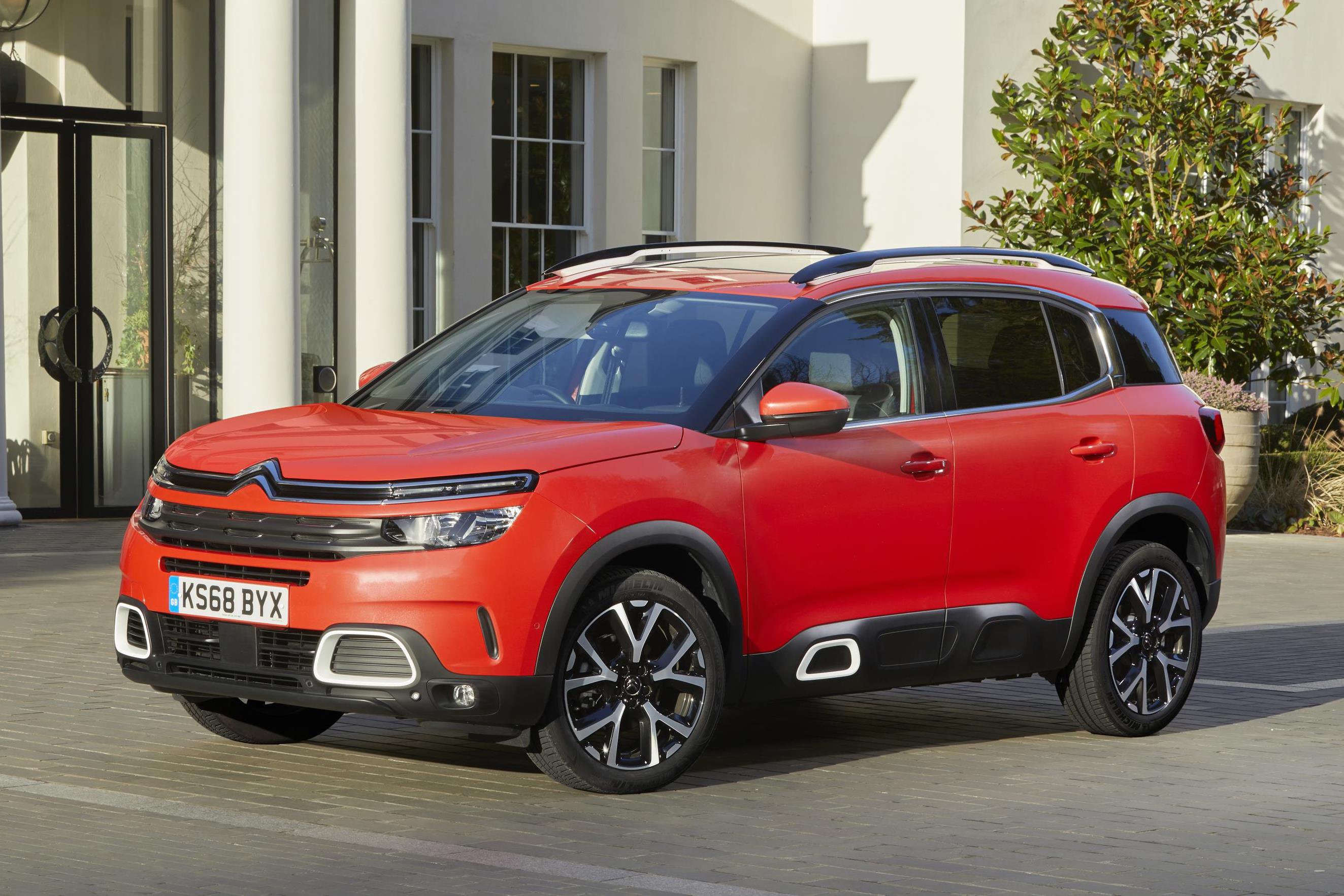 And so it is with the all-new Citroen C5 Aircross. The latest Citroen was introduced to the UK motoring media in January. Earlier this month I spent a week with KS68 BYY, presented ‘Volcano Red’ and trimmed to ‘Flair Plus’ specification. It was fitted with the three-cylinder 1.2-litre PureTech-130 turbocharged petrol engine, paired to a six-speed manual gearbox.

Just prior to its return, I scribbled a few notes… 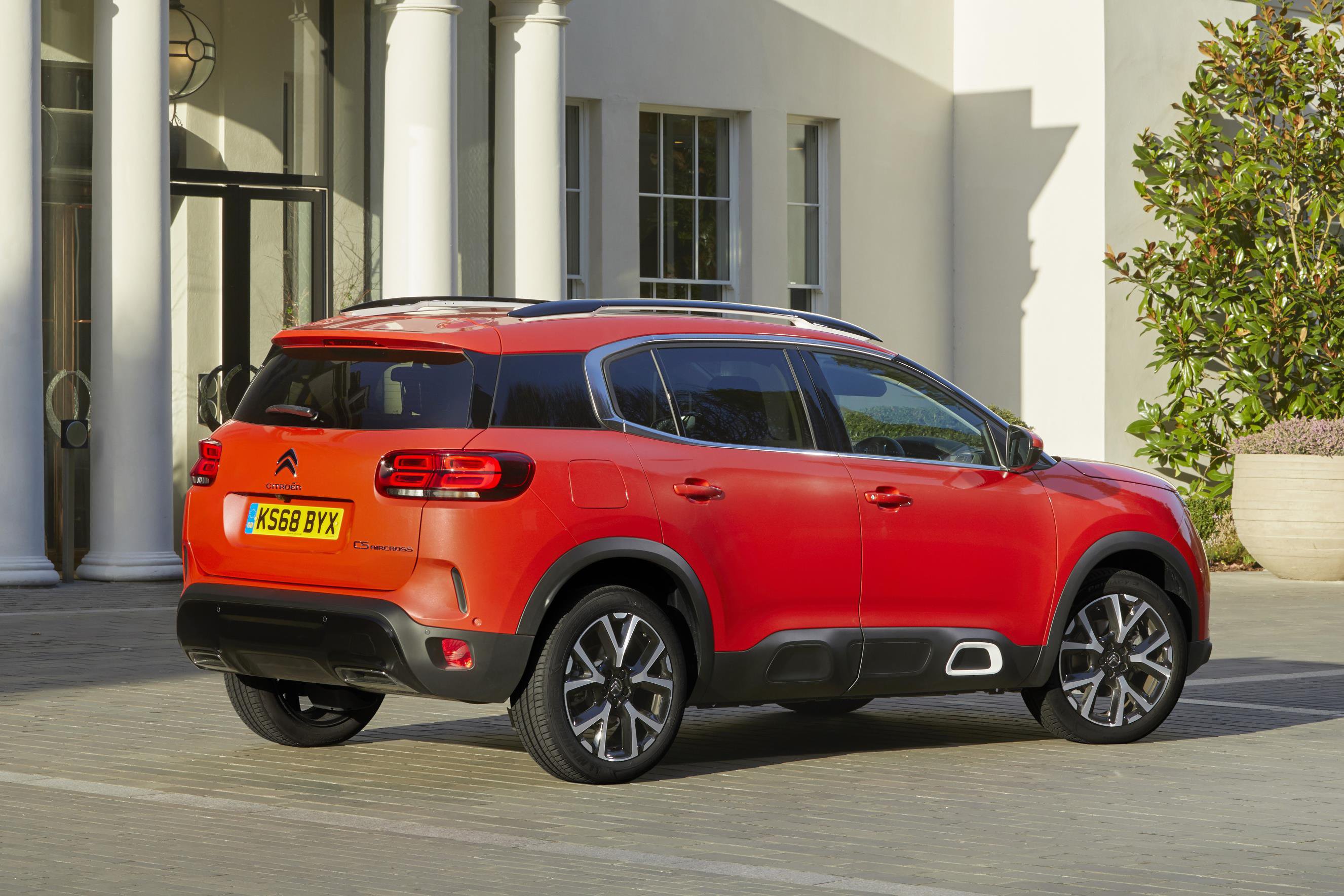 Compared to similarly priced alternatives, the Citroen C5 Aircross is a breath of fresh air and a perfect example of the carmaker’s welcome return to Gallic quirkiness in recent years.

Thanks to some neat design features, such as the intricate 3D brake lights and contrasting colour accents dotted around the body, the Citroen C5 Aircross looks considerably more interesting than many of its rivals. There's also a pair of now-familiar Airbumps along the lower edges of the doors for a dash of carpark protection. 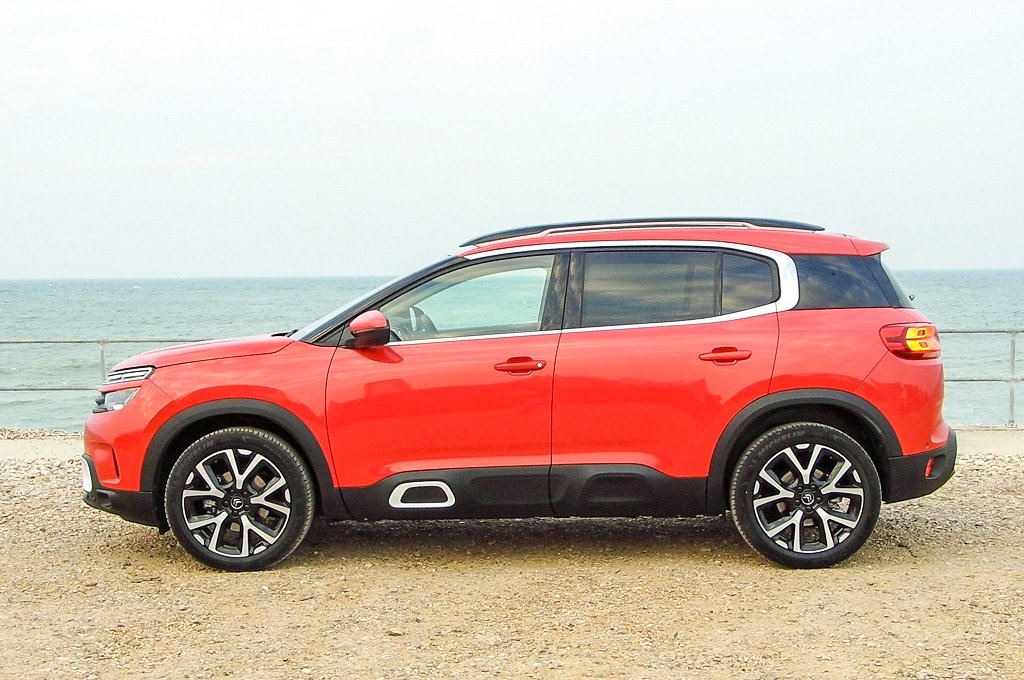 LED-rich tail lamps are bisected by a wide-opening tailgate, while the exterior can be spruced-up further with flashes of red detailing. An elegant touch are the chrome-look hoops around the side windows, with a third piece of privacy glass acting as the C-pillar.

Citroen (like its PSA Group stablemate Peugeot) has taken its range of interiors way upmarket in recent years, and the new C5 Aircross is no exception. There’s a distinctive look to the cabin which boasts a 12.3-inch infotainment screen on high-spec versions, with a wide centre console and an electronic instrument binnacle directly ahead of the driver. 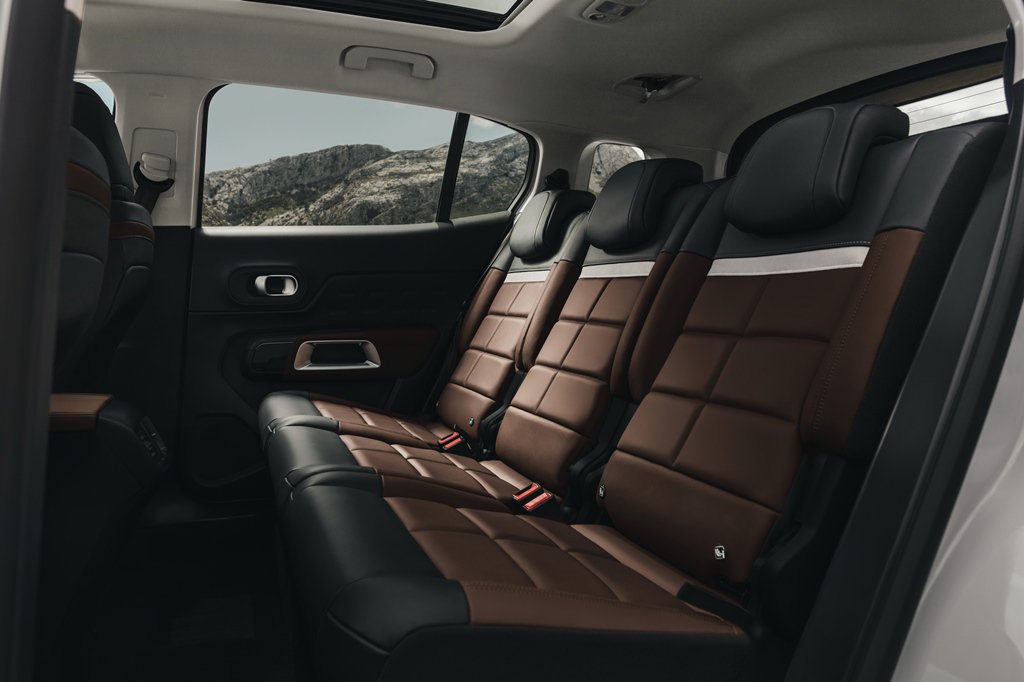 Primary controls fall easily to hand and a comfortable driving position is readily found. However, secondary controls such as heating and climate control are principally driven by the central touchscreen. Some might enjoy it, but I’ve never taken to it due to safety concerns.

There is plenty of space both up front and in the rear, with a deep and generously proportioned central cubby, which is more than capable of taking all of your paraphernalia. 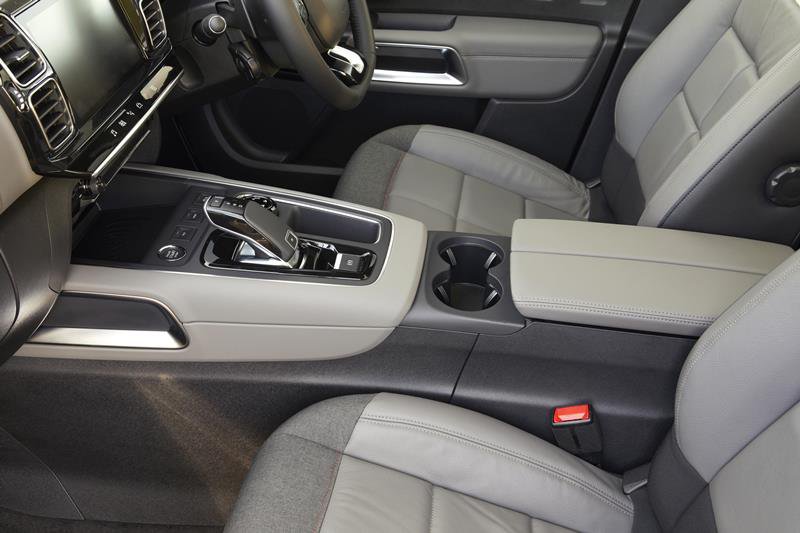 Impressive aspects are the soft yet supportive seats and the interior quality which must surely now be considered up there with the class leaders. Fortunately, in the pursuit of quality, none of the design flair that you'd expect from a flagship Citroen has been overlooked.

The rear is roomy for three passengers each with their own individually adjustable seat that slides forward and reclines separately. For now at least, there's no seven-seat version, which means if you’re looking to shift more people, you'll need the more elegantly styled Peugeot 5008.

With the rear seats in their default position, there is a generous 580 litres of luggage capacity available. Slide the seats fully forward and boot space increases to 720 litres. 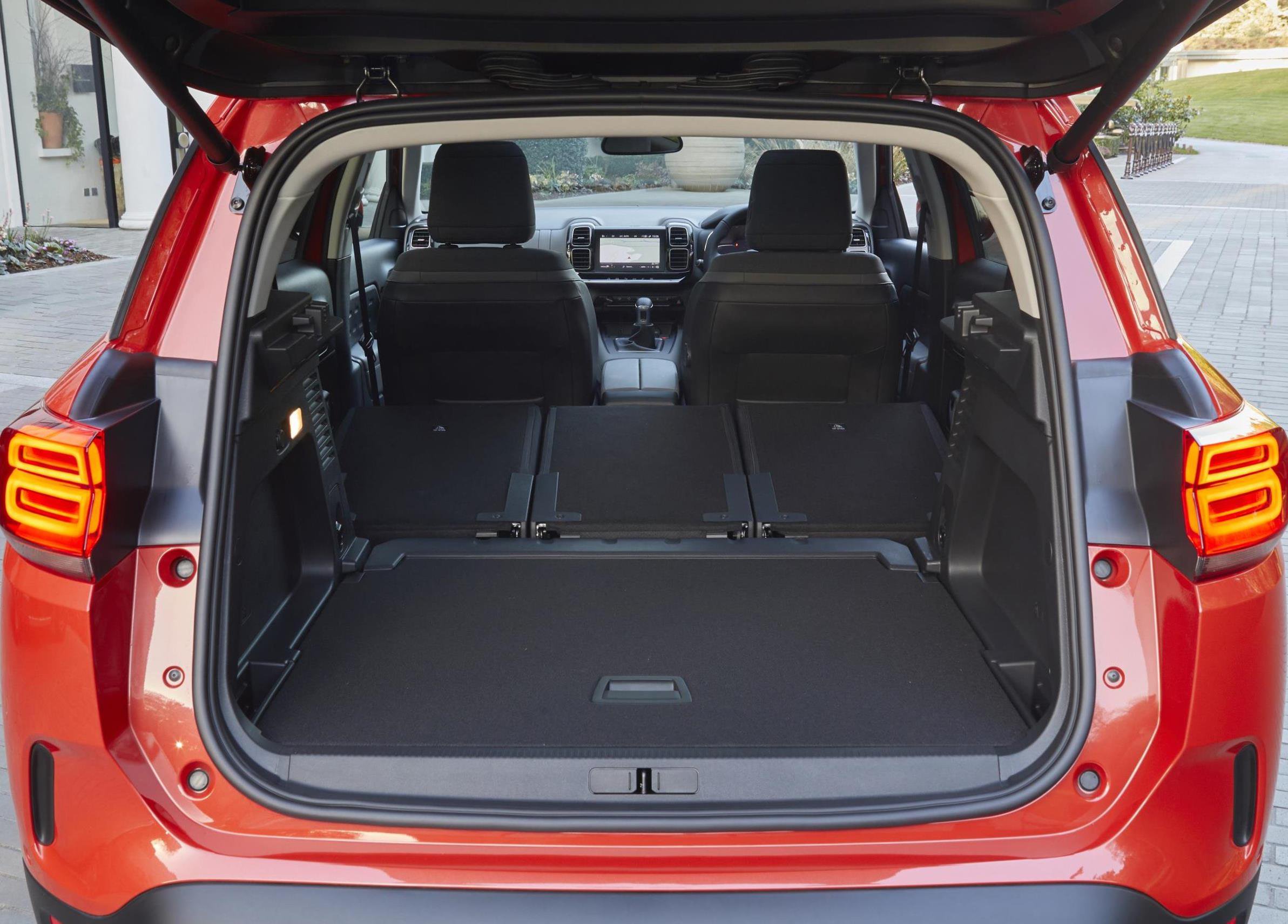 However, fold row two down entirely – a somewhat fiddly task – there's 1,630 litres at your disposal. The boot floor is flat and the tailgate opens high, with a wide aperture to make it easy to load heavy items. Feel Plus models (as tested) have an electric tailgate as standard that opens when you make a foot-waggling gesture below the rear bumper.

Citroen have run with a simplified, three-tier trim line-up for the C5 Aircross. There is the range-entry ‘Feel’ that comes with 17-inch alloy wheels, a 12.3-inch digital instrument cluster and an 8.0-inch touchscreen. Next up is ‘Flair’, which includes 18-inch alloys, front parking sensors, a reversing camera, the ‘Citroen Advanced Comfort’ seats as standard, a satnav upgrade, tinted glass and a blend of leather and cloth upholstery. This is the model that Citroen expects to sell the most of in the UK.

Top of the range is ‘Flair Plus’ as tested. It brings active LED headlights and adaptive cruise control, a panoramic roof, 19-inch alloys and an appealing brown leather interior. 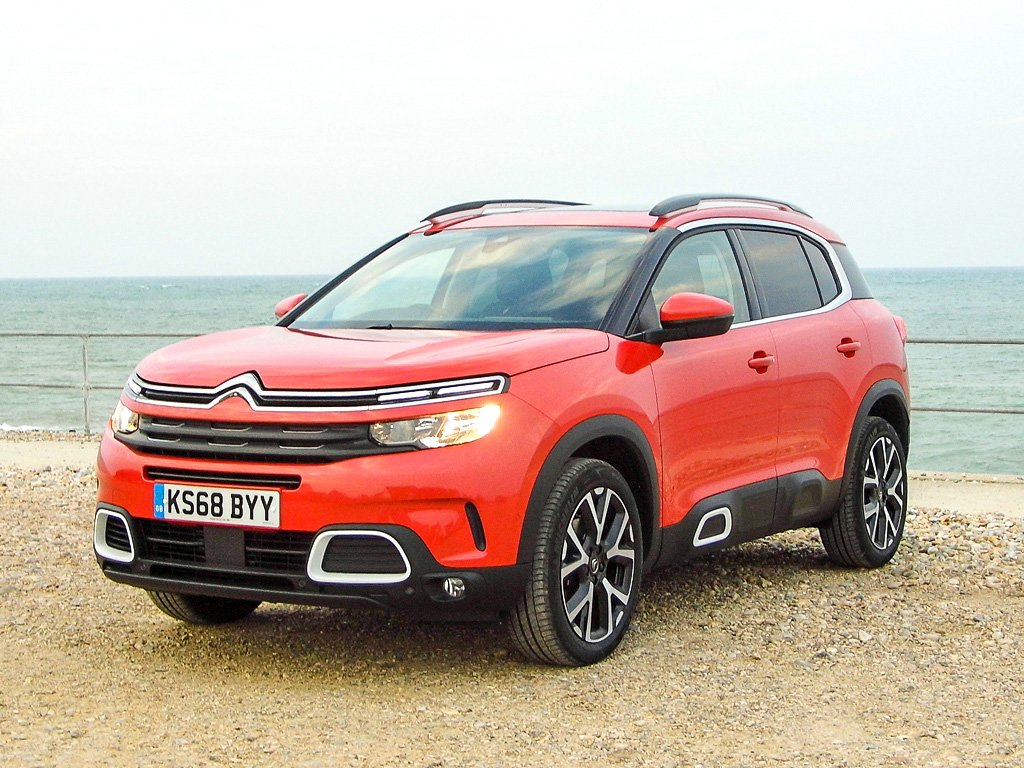 The Citroen C5 Aircross is available with a range of latest-generation Euro 6.2 turbocharged petrol and diesel engines.

There are just two petrol engine and transmission pairings: the PureTech-130 six-speed manual (as tested), and the PureTech-180 eight-speed automatic. 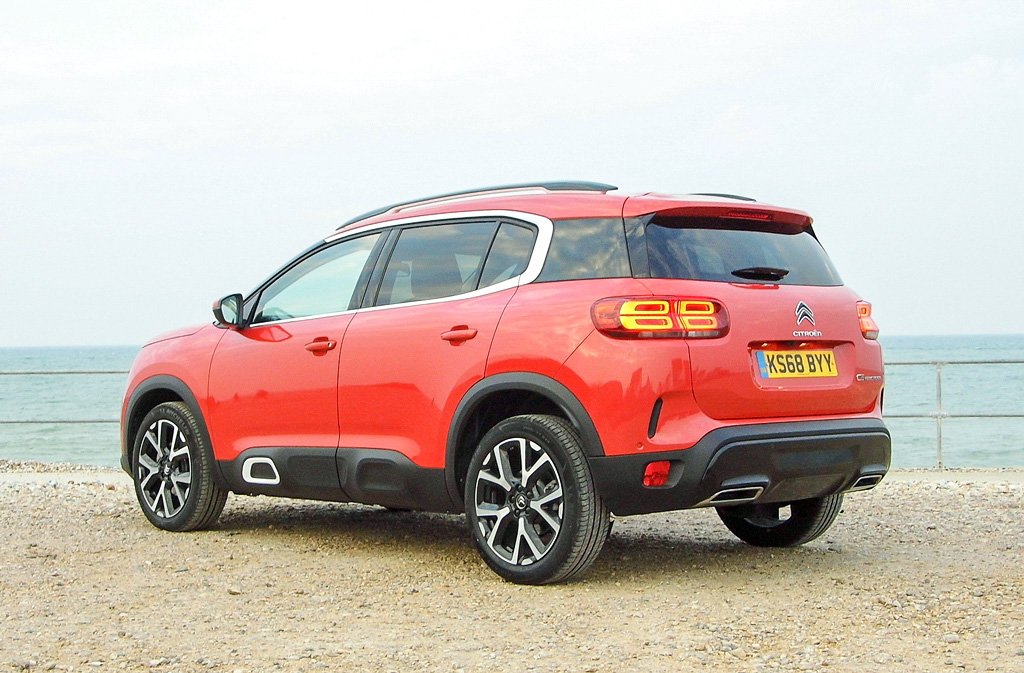 A 300hp plug-in hybrid electric (PHEV) powertrain – with a battery-only range of 40 miles – is expected in late 2020. It will be the only model in the range with proper four-wheel drive.

The Citroen C5 Aircross is born from the same mechanical platform as the Peugeot 3008 and the two models share engines and gearboxes. One big difference, however, is Citroen's much-vaunted 'Progressive Hydraulic Cushion' suspension. This takes the place of conventional bump stops that ordinarily limit suspension travel, replacing them with small hydraulic dampers. 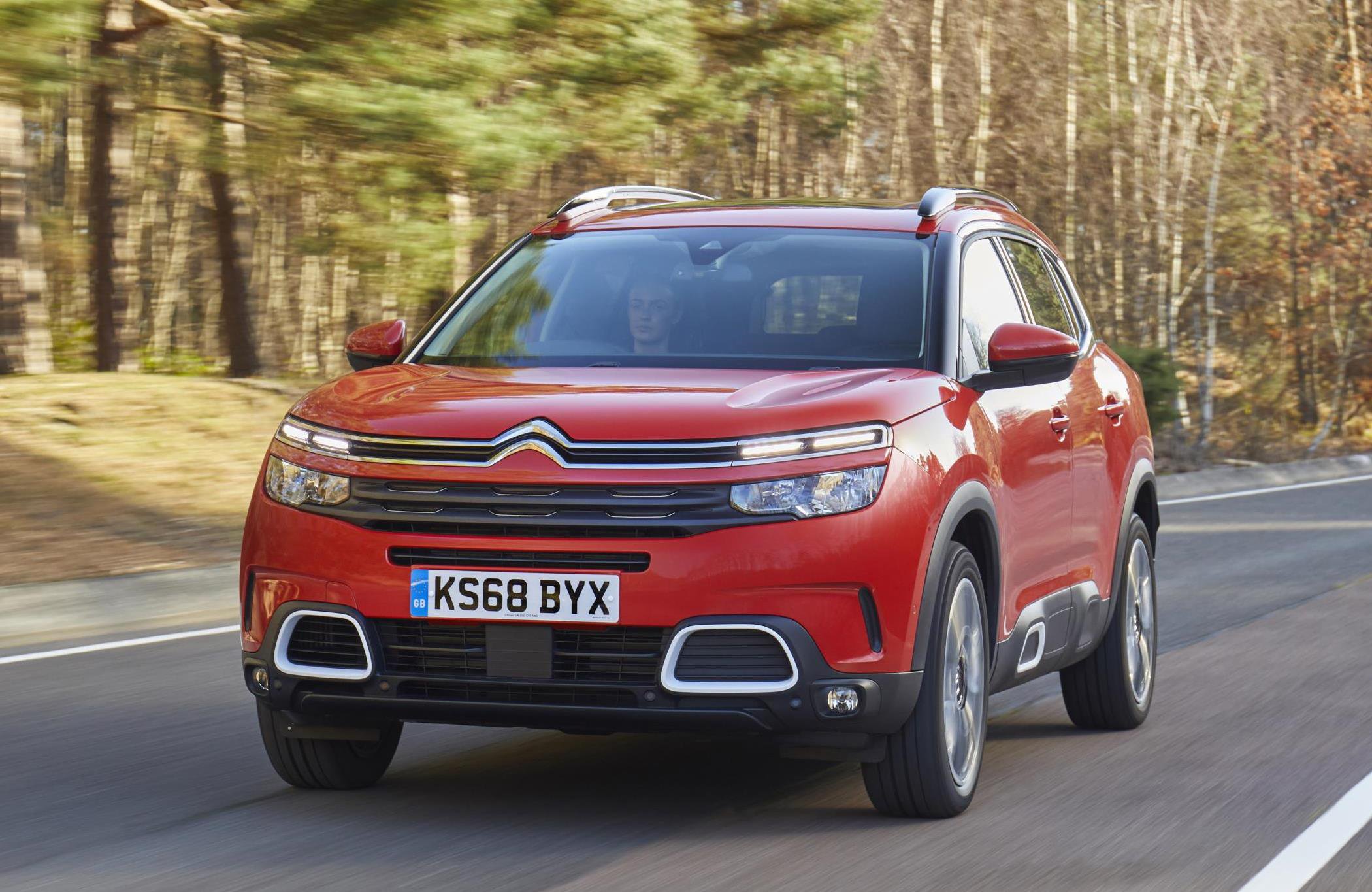 Ride comfort is justifiably billed as one of the C5 Aircross's main selling points. It handles rather well, but the steering is too light to deliver any real understanding of the goings on underneath you. In addition, the soft suspension setup means there’s a tad too much body-roll in corners, although the chassis does a reasonable job of keeping it all under control. 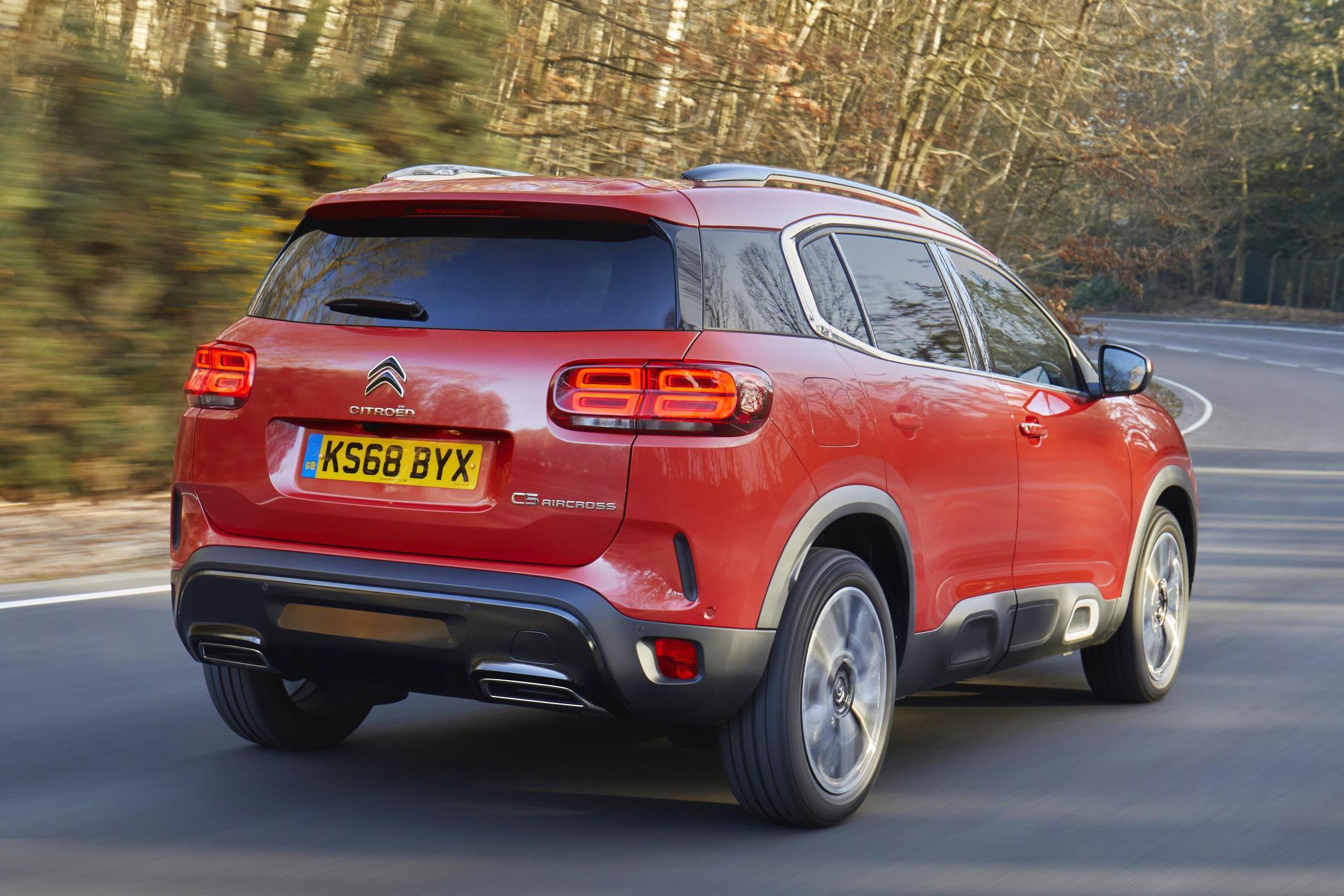 Attempting to drive the C5 Aircross with a dollop of enthusiasm will be likely met by complaints from your passengers, as they shift involuntarily from side to side in seats that lack much in the way of lateral support. Their 'advanced comfort' design seems more focussed on making long, fast motorway journeys a pleasure – a job they perform excellently – than to help when the roads get twisty.

Like the Peugeot 3008, the C5 Aircross is front-wheel drive and, as such its off-road capability is meagre on most models and pretty much nil unless you opt for the 18-inch ‘mud and snow’ tyres. These combine with the optional Grip Control system to give the front wheels a bit more bite on loose or slippery surfaces, but to be honest, wet camping pasture is pretty much as far off the green lane as you'd be wise to go. 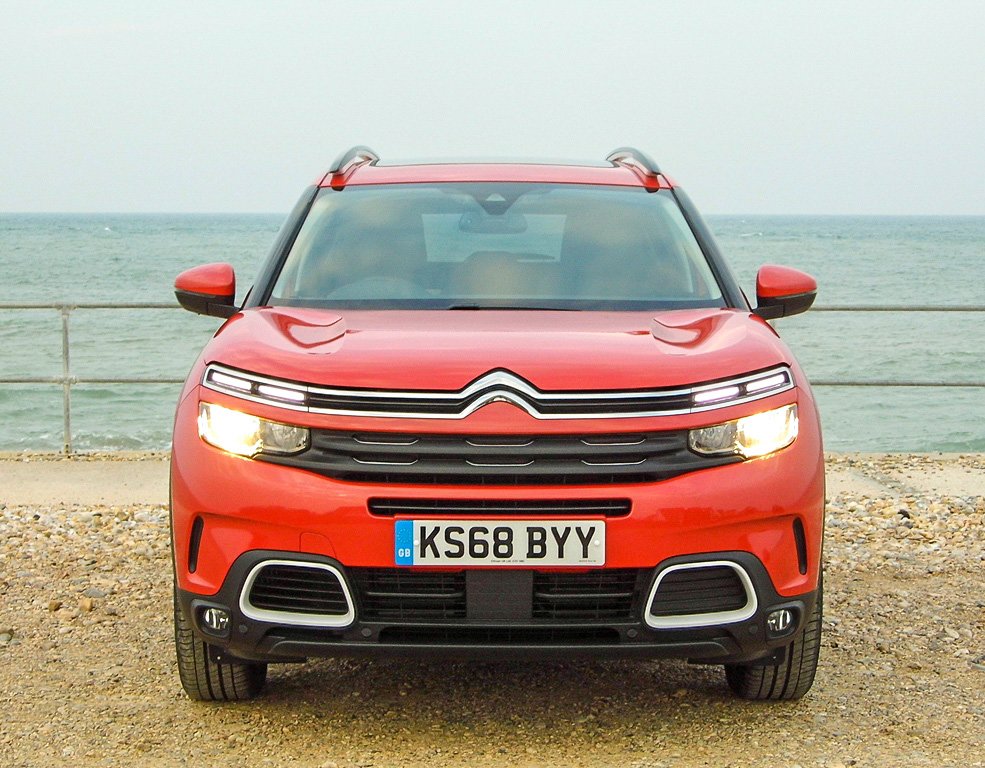 Citroens are not particularly renowned for their towing ability, but the C5 Aircross is able to haul a braked weight of 1,350kg with a towball load of just 54kg. This should be more than enough for a medium-sized caravan or a single horse trailer – complete with horse, hay and kit.

The C5 Aircross offers much in the way of safety kit, including a forward-looking camera to enable driver assist functions. As the Safety+ Pack is now standard across the range, it achieved a full five stars after recent crash and safety testing by Euro NCAP.

Formerly an option for UK models, the Safety+ Pack adds a radar sensor to the camera to enhance the performance for AEB City, AEB Inter-Urban, AEB Pedestrian and adds cyclist detection. 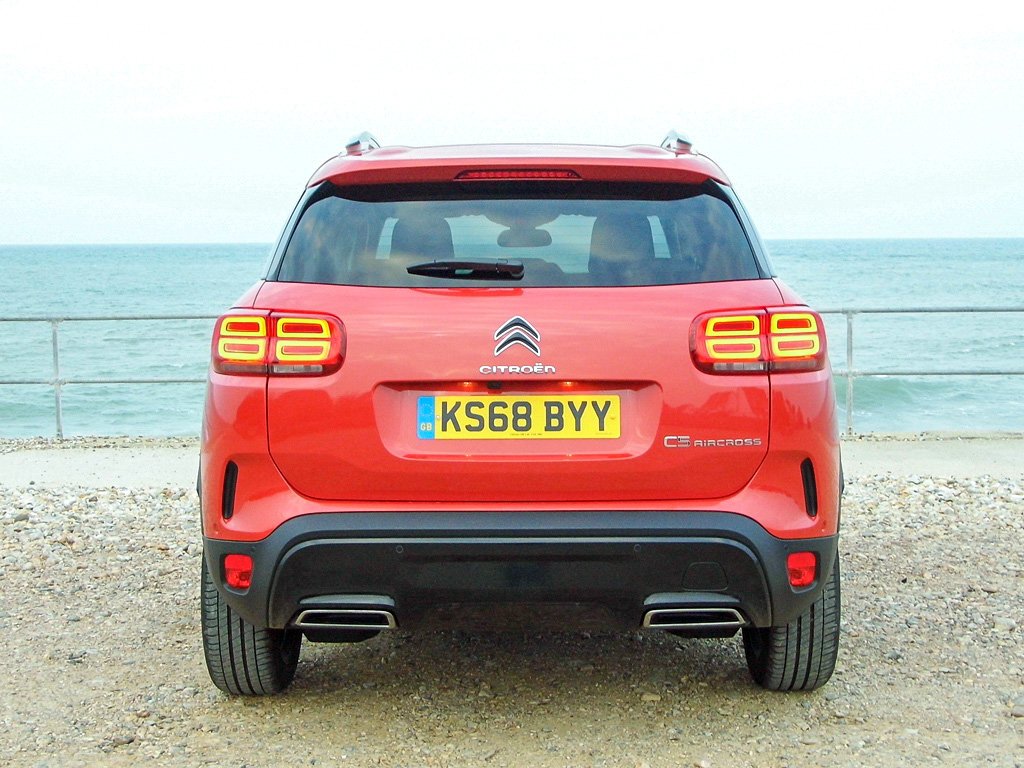 If you're after a large family-oriented crossover that majors on comfort over dynamic prowess, you’re in the right place. It’s stylish too, with a chunky look and an individualistic front end that means you won't be confusing it with any of its rivals. Equally, it's roomy and efficient, too.

The added comfort merely adds to the appeal for those struggling with Britain's pothole-riddled roads. It won't work for everyone – some people prefer a firmer ride and sportier handling. But, for those who don’t, this soft- and high-riding crossover comes highly recommended. 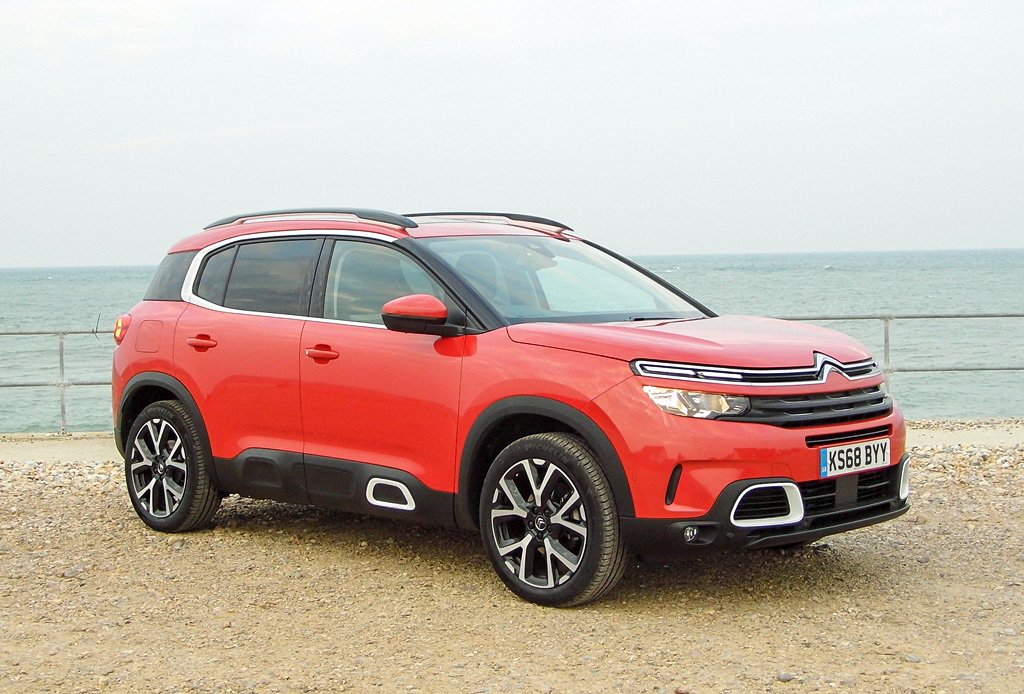 Volkswagen T-Cross: Dotting the i’s and crossing the t’s

The compact T-Cross is the fifth member of Volkswagen’s SUV range. But...

Skoda will rework its Karoq and Kodiaq SUVs for 2020, adding a range...