First things first; the bull elephant in the room. The exterior of the new BMW X7 may not suit everyone’s taste, but if you like your luxobarge SUV to be imposing, it doesn’t get much more so than the X7’s mahoosive grille filling your victim’s rear view mirror. Not every new car these days is designed with a specific eye on European buyers. The gargantuan X7 seven-seat SUV is primarily aimed at customers in America, the Middle East, China and various Asian markets. But BMW thinks better-heeled buyers with larger families here might like one too.

Based on the same CLAR architecture as the 7-series saloon and strongly related to the Rolls-Royce Cullinan, the BMW X7 is the Bavarian manufacturer's first real Range Rover rival. It sits atop its now expansive SUV range and offers the comfort and luxury of a top-end limousine, but in a taller and more fashionable package. Measuring well over five metres in length and two metres wide, it is bigger than most other cars on the road. It was unveiled online in October 2018 and is built for all world markets at BMW’s Spartanburg plant in South Carolina, USA. UK sales commenced in March this year and we recently put YH19 OUB through its (rather rapid) paces around the Millbrook Proving Ground in Bedfordshire… 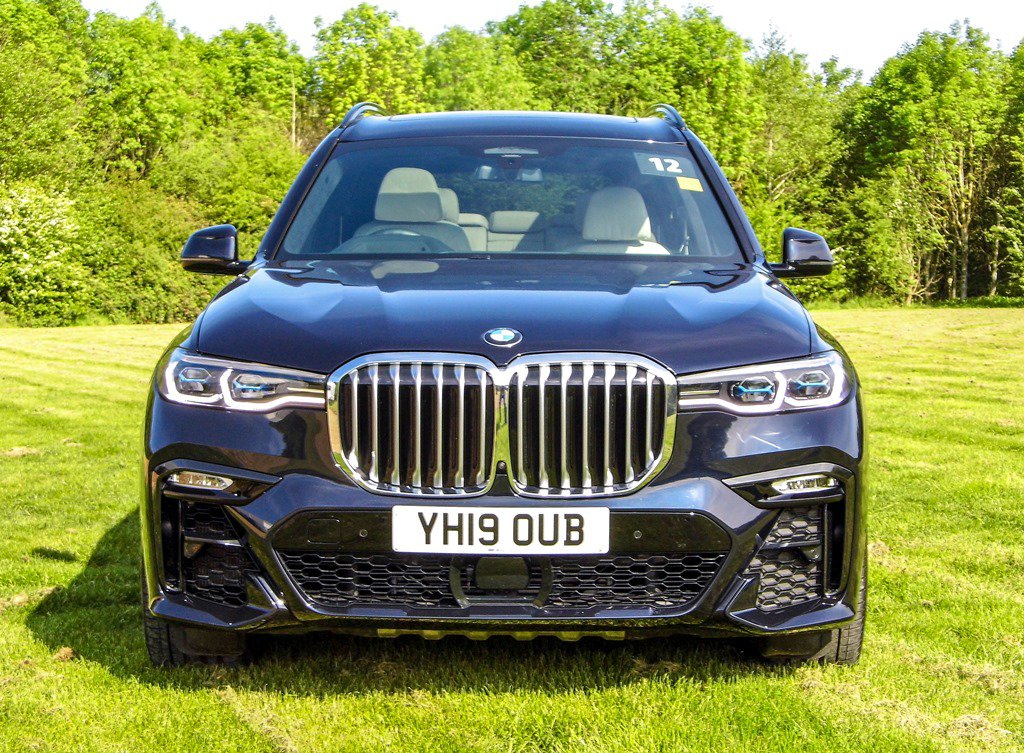 Oversized and polarising grille aside, you won't fail to recognise the X7 as a BMW SUV, albeit one with stretched proportions. There is plenty of chrome trim dotted all around the X7 to affirm its high price tag.

Overall though, the biggest BMW is quite conservative in its styling, with upright windows, sharp lines and a huge, flat roof flanked by practical roof bars. It's essentially a super-sized X5, but it makes far more of a pavement statement.

You can specify a third seating row on the brand's smaller X5, but the extra furniture is for teeny-weenies only. Here, seven adults can fit more comfortably in a car that BMW hopes will make a really big impact.

If you’re not overly fussed what the neighbours think - or perhaps, even if you are - then you'll probably quite like one.

Inside, you sit high and the rear window seems a long way off. Most of the cabin technology and architecture is predictably shared with the X5 - principally the 12.3-inch digital screens used for the centre-dash monitor and the instrument cluster - and there's a huge part-opening glass roof to flood the cabin with light. 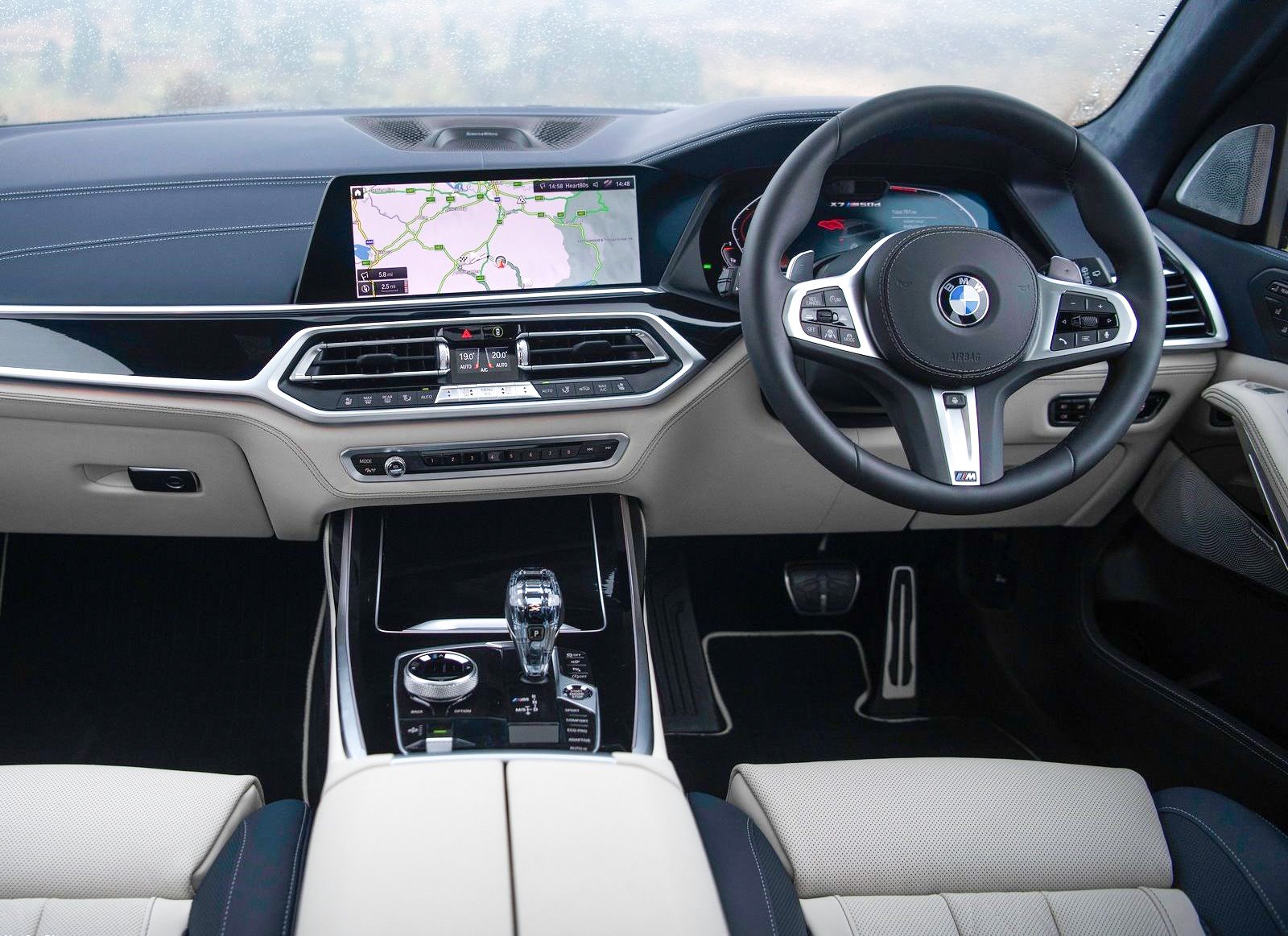 Often, in larger vehicles, the quality of materials and presentation can drop off rapidly as you move to the second and third rows. Not so in the X7. There is plenty of middle row space (which slides fore and aft) and even those consigned to the third row seats won't feel too short-changed, though getting to them past the forward edge of the rear wheel arch can be challenging.

Once comfortably ensconced, there are some nice amenities back there, with its own set of climate controls, a pair of USB-C charging ports and its own glass roof to help stave off claustrophobia. 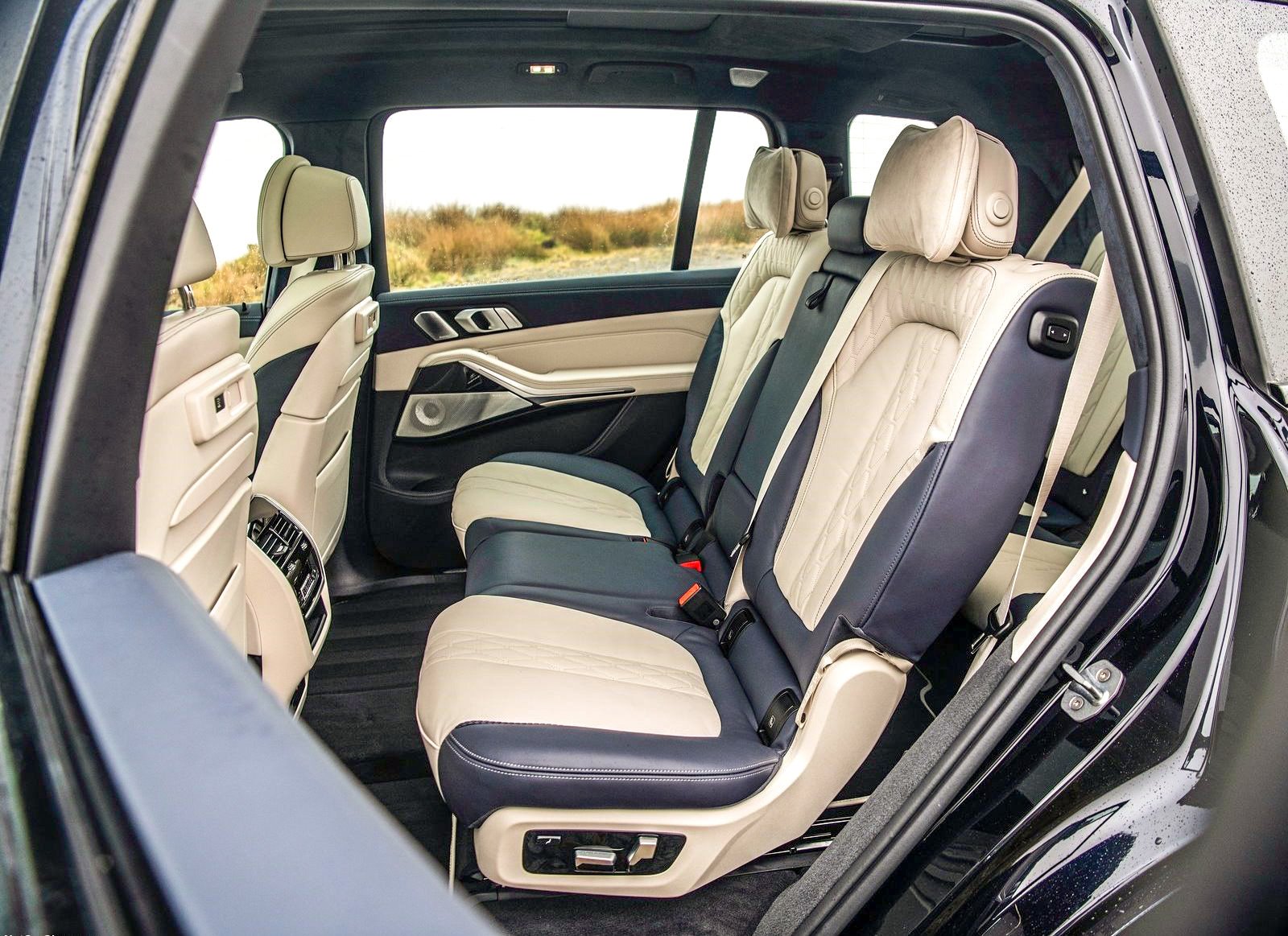 The entire seating layout is altered electrically, with separate buttons for maximum luggage volume or maximum passenger space, for example. It’s a bit slow in changing from one arrangement to another, but that shouldn’t be a major issue for owners.

The X7 can also be ordered with a six-seat layout, with two separate armchairs in row two for the ultimate in luxury. The resulting ‘corridor’ offers much easier access to row three. 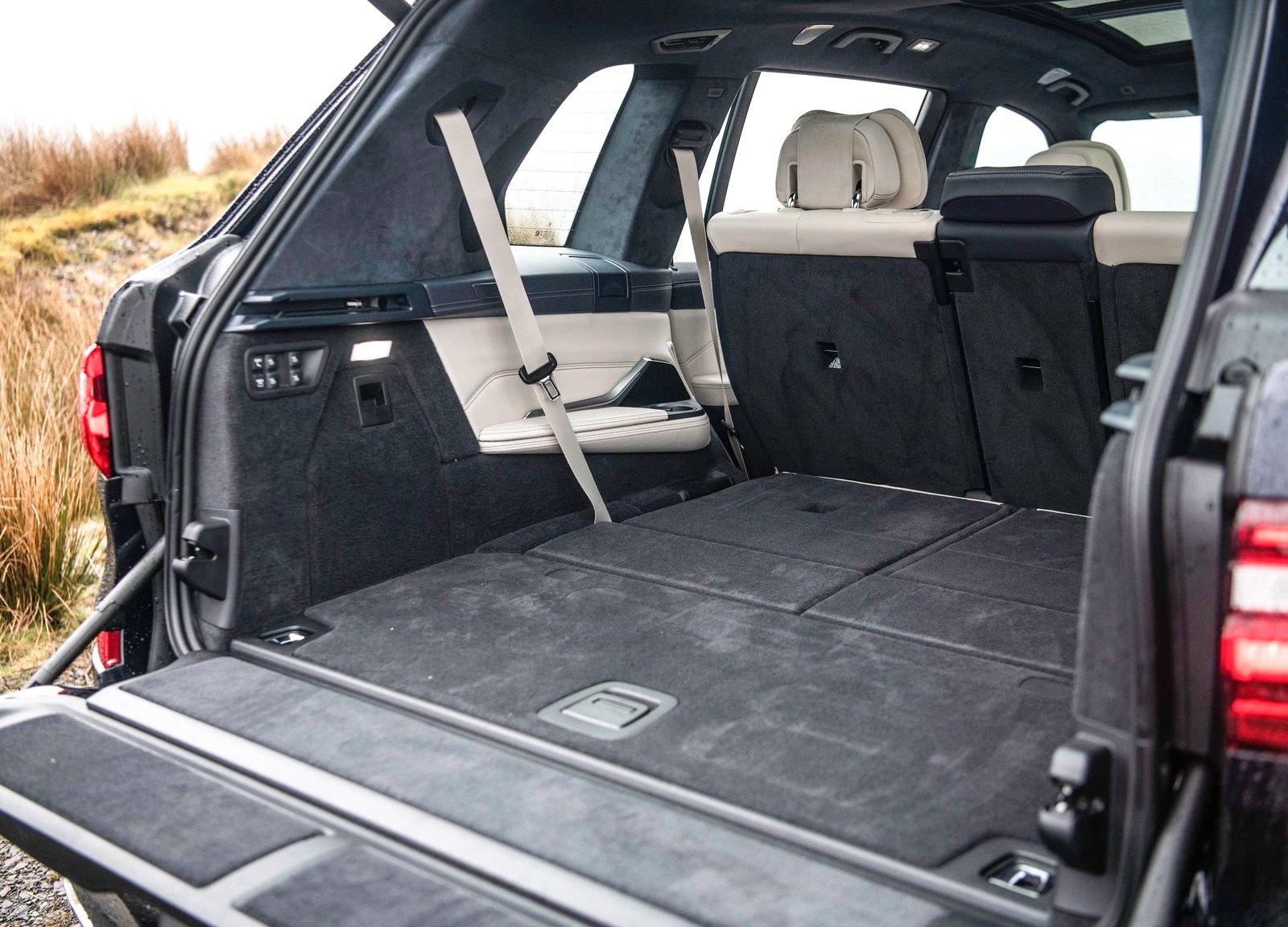 Access to the boot is via an electrically-operated split tailgate. With all three seat rows in place, the boot capacity is 326-litres – around the same capacity as a Volkswagen Polo. Drop the two rear seating rows and 2,121-litres of carriage space is freed up. A button in the luggage compartment activates a loading mode that lowers the car by 40mm for easier access. 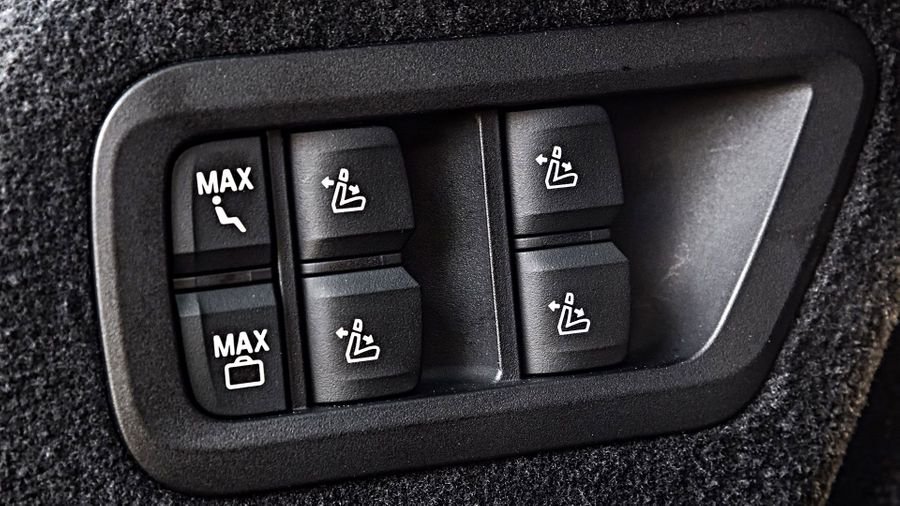 The X7 line-up is quite simple. Buyers choose from the range-entry ‘Standard’ X7, the sportier-looking ‘M Sport’ version, or the ‘M Performance’.

All cars are generously equipped as standard, including such niceties as large alloy wheels, LED lighting, leather upholstery, electrically adjusted and heated seats (front and rear) and a sophisticated self-parking system. 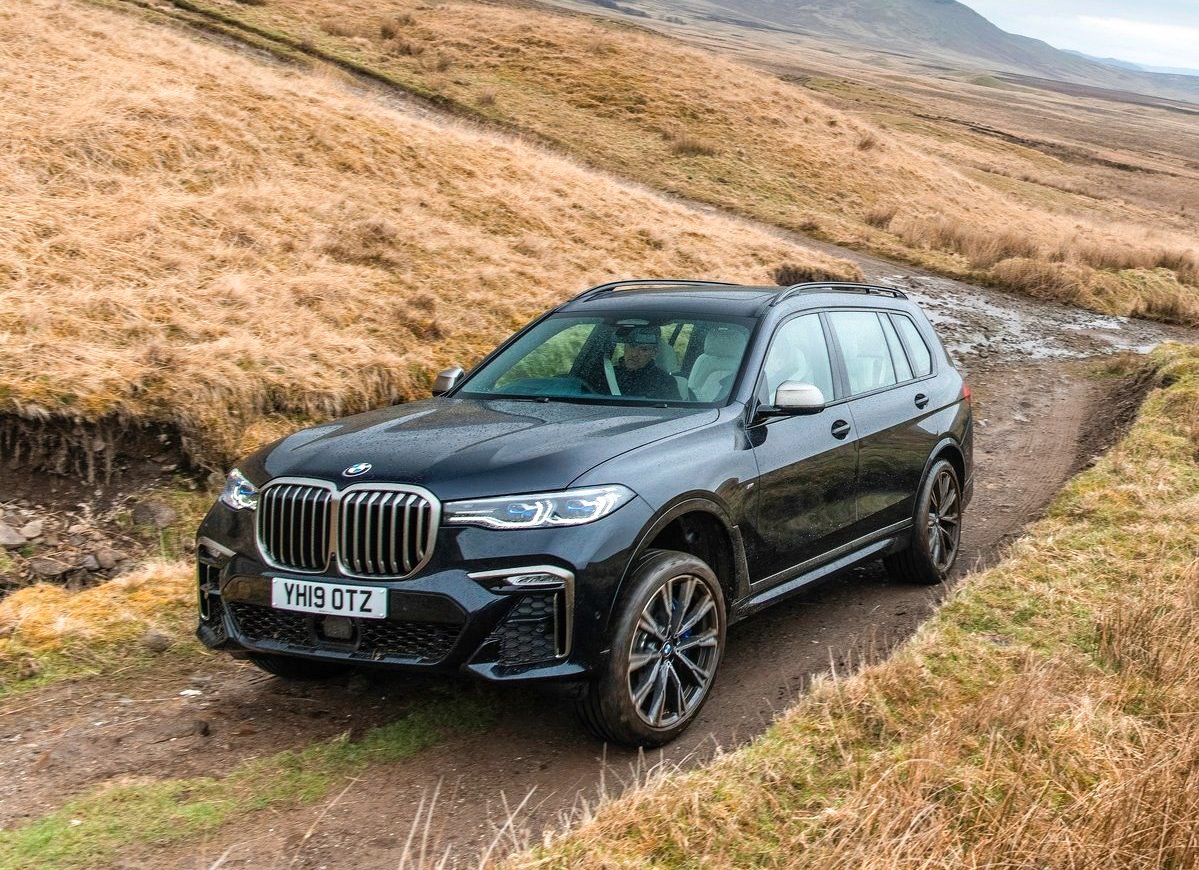 The comprehensive infotainment system features gesture control (pointless) and voice control (really good), wi-fi, Bluetooth, sat-nav, DAB radio and various online services, while BMW also throws in what it calls its Display Key, which is silly-big, though some might like its touch-screen functionality and constant communication with the car.

Power is taken care of by two diesels and a petrol unit, all with six cylinders, turbochargers, four-wheel drive and an eight-speed automatic gearbox.

The range-entry xDrive30d has 261hp and manages around 33mpg, while the xDrive40i petrol up the horsepower to 335, returns up to 25mpg and cuts a second off the diesel’s seven second 0-62mph time. 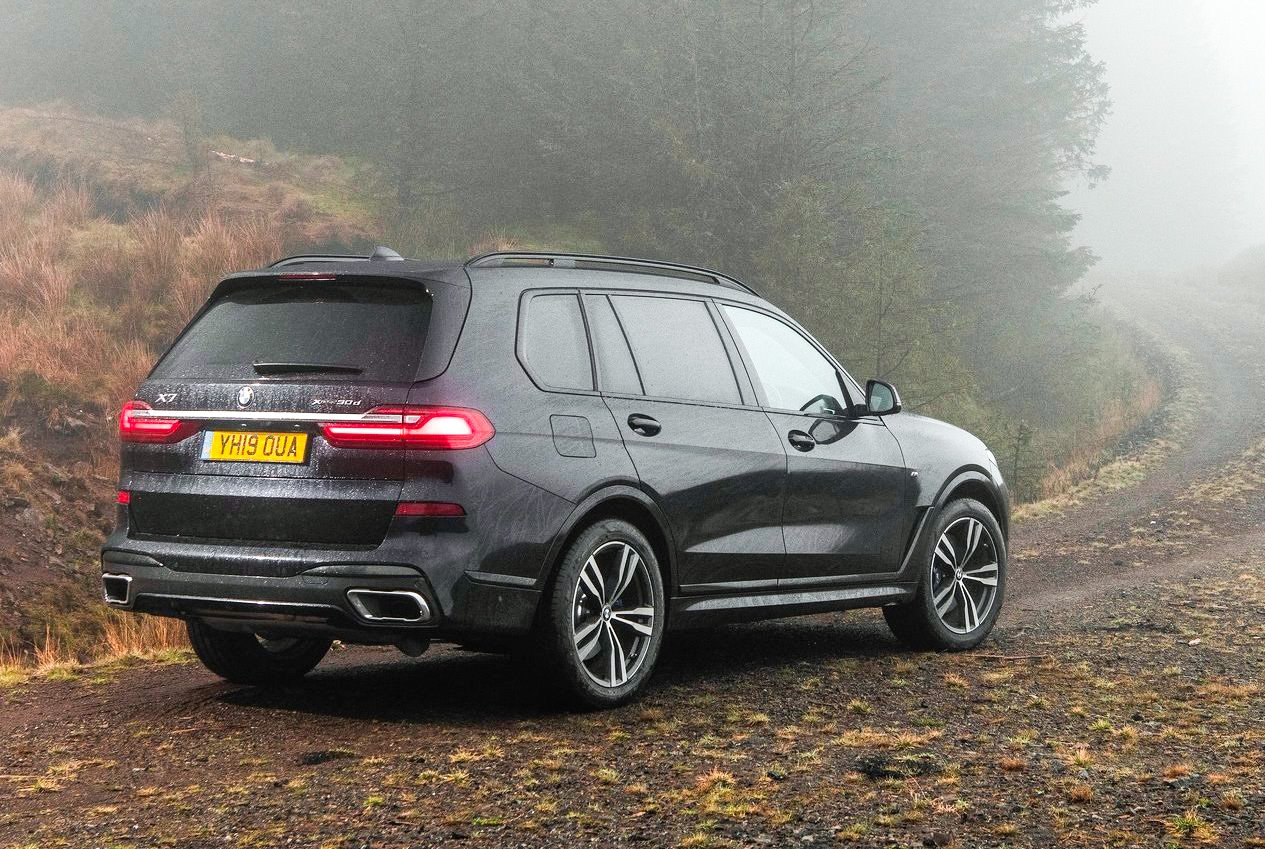 The X7 range-topping M50d diesel is tuned to produce 395hp / 760Nm and does 0-62mph in 5.4 seconds (which matches a V8 Range Rover. However, as strong as these engines are, we expect owners seeking low running costs and business drivers will be hoping a plug-in hybrid appears soon to take on the Range Rover P400e.

On the road, the BMW X7 feels like a longer and heavier BMW X5, but not by as much as you might think. It's certainly offers a more sporty drive than a Land Rover Discovery or Range Rover and, while it might not match them off road, it’s still extremely capable.

To make this possible, there is plenty of unseen technology in action behind the scenes, including air suspension that can raise the X7 by 40mm above its usual ride height, or (as mentioned) drop it 40mm for easier access and loading when parked.

Choose the option named 'Integral Active Steering' and the rear wheels can also turn slightly to boost agility and make the X7's turning circle smaller for city driving. You can also tailor the driving experience with the Executive Drive Pro pack (featuring active roll stabilisation) and an Off-Road package that brings four extra driving modes (Snow, Sand, Gravel and Rocks) and new displays for the instruments.

Progress in the X7 is easy and effortless to tap in to, helped by the slick eight-speed ZF-8HP gearbox which just happens to be one of the best automatic cog-swappers available anywhere. It’s responsive, but always smooth. Refinement is excellent, too. Even on big wheels, road noise is kept in check and there’s almost no wind whistle.

The BMW X7 feels solid and impeccably well built, but like any flagship SUV, it's also hugely complex. Part of this complexity is down to its numerous safety systems, but these will certainly provide reassurance to anyone fortunate to be driven in BMW's limo-like SUV.

Yet to be tested by crash safety gurus EuroNCAP, BMW has pulled no punches when it comes to safety technology and driving aids, fitting the X7 with active cruise control and autonomous emergency braking (that can recognise pedestrians) as standard.

You can also choose to upgrade the cruise control so that it can essentially take over in heavy traffic on well-marked roads. A plethora of cameras and aids should also make parking the big X7 a lot less stressful. 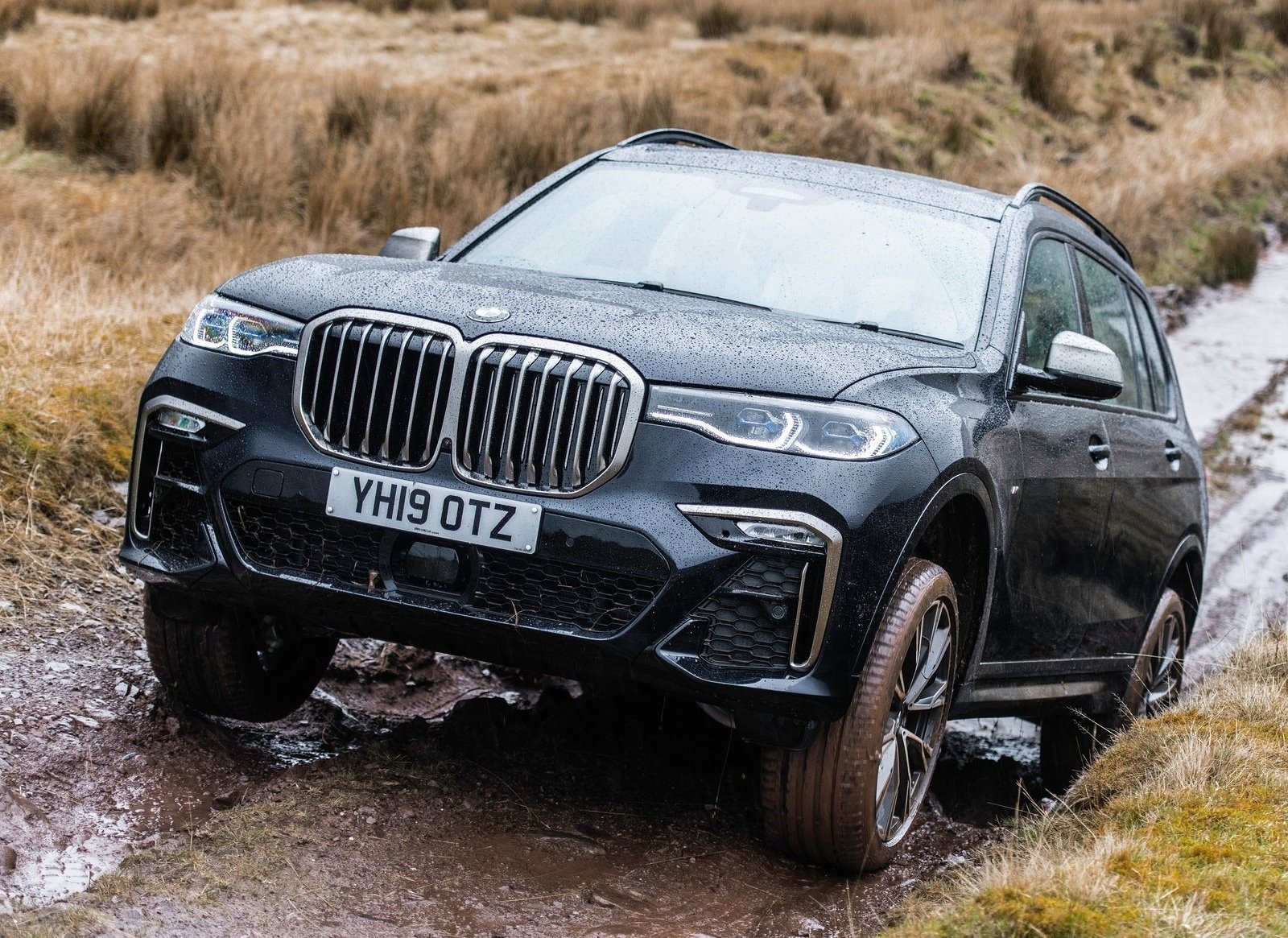 There are surprisingly few high-end luxury SUVs on the market and fewer again that can genuinely seat up to seven adults in long-distance comfort.

The BMW X7 plays that role well, so it’ll suit well-heeled families that need a more flexible interior than any normal luxury car can provide. In six-seat guise, it’s also likely to appeal to those that prefer to sit in the back and be driven in a high-riding car that has a lot of presence.

For a car that’s so divisive, there’s a lot to admire about the X7…to the extent that we’d say its mix of luxury, versatility and dynamic ability is unmatched by anything else for comparable money.