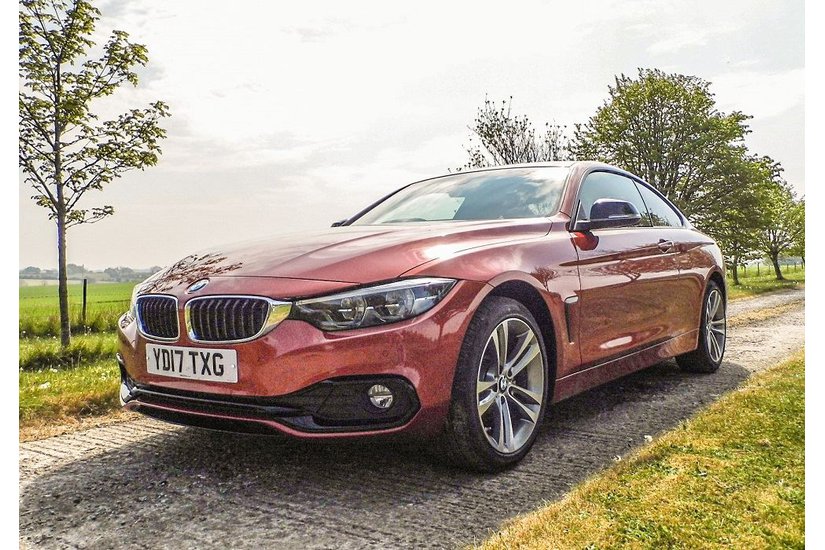 For many years, BMW used to sell different body styles of its smaller, mainstream range under two simple nomenclatures–the 1- and 3-Series. But, in 2013 the German car maker decided to mix things up a little. With the addition of a boot, the 1-Series coupé morphed into the 2-Series and a convertible version inevitably followed.

The coupé of the 3-Series became the 4-Series, which was followed by the convertible and the 4-Series Gran Coupé which, by definition of its four doors, wasn’t a coupé at all. But, its roofline was shaped like a coupé…so, there.

That reshuffle mirrored the strategy of arch rival Audi, who spun off the coupé and convertible versions of the A4 into the separate A5 nameplate some years earlier.

This background is not criticism. All by themselves, the BMW 2- and 4-Series have charmed the marque back into my heart. In essence, they are brilliantly driver-focused and each has become a huge global sales success in its own right, with global sales of over 400,000 units enjoyed in the four intervening years.

This week, I’ll tell you about those updates and take the best-selling 420d M Sport coupé version for a spin on UK roads. 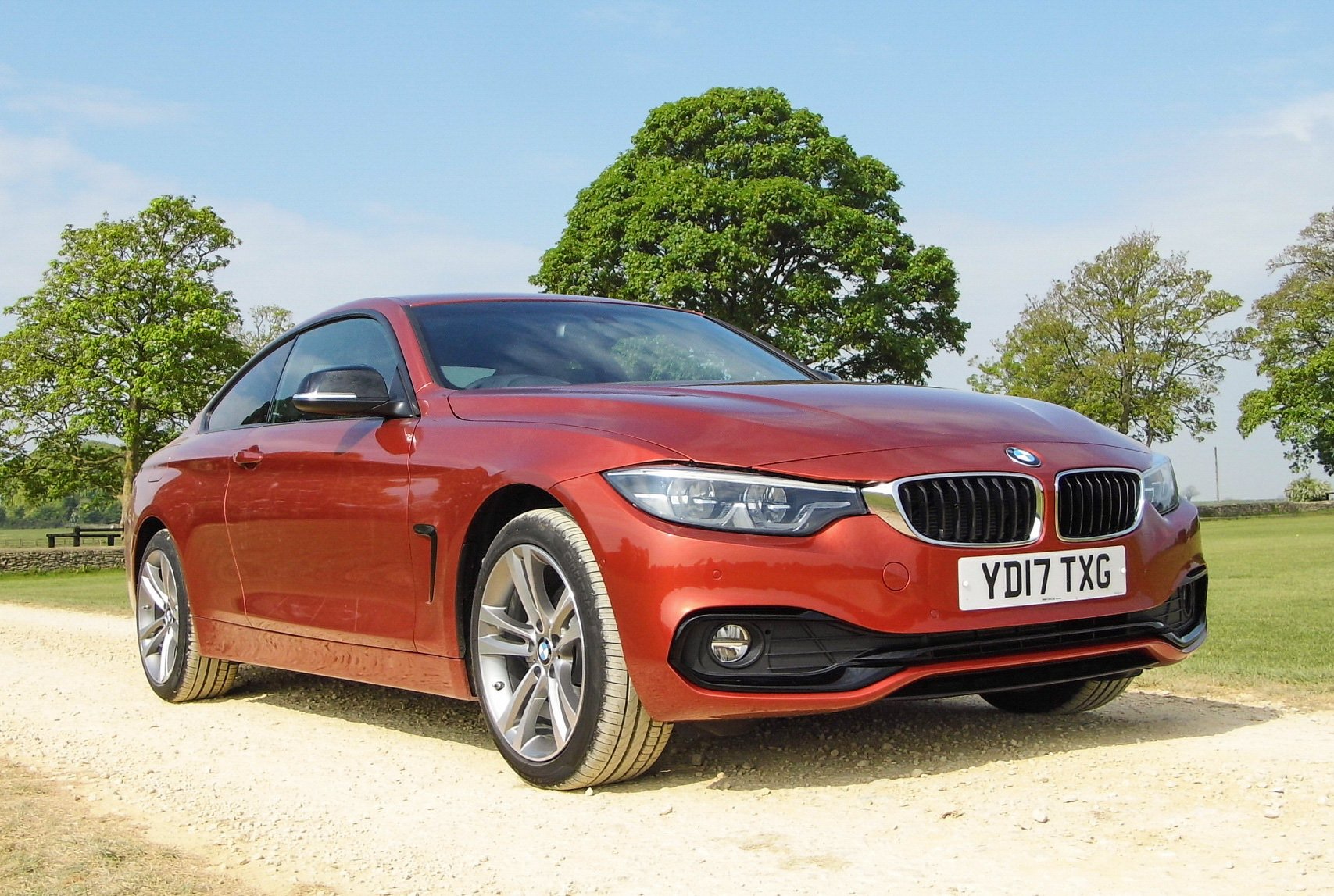 On the outside, the styling enhancements on the new 4-Series are barely noticeable. Restyled bi-LED headlights are now standard and take the place of the outgoing cars’ xenon units, with the adaptive versions remaining on the options list. Meanwhile, all 4-Series models now have LED front fog lamps as standard and for the Sport and Luxury Line trims there’s a restyled front apron.

At the rear, redesigned light clusters carry LED lighting for the first time and a new apron finish off the upgraded look. 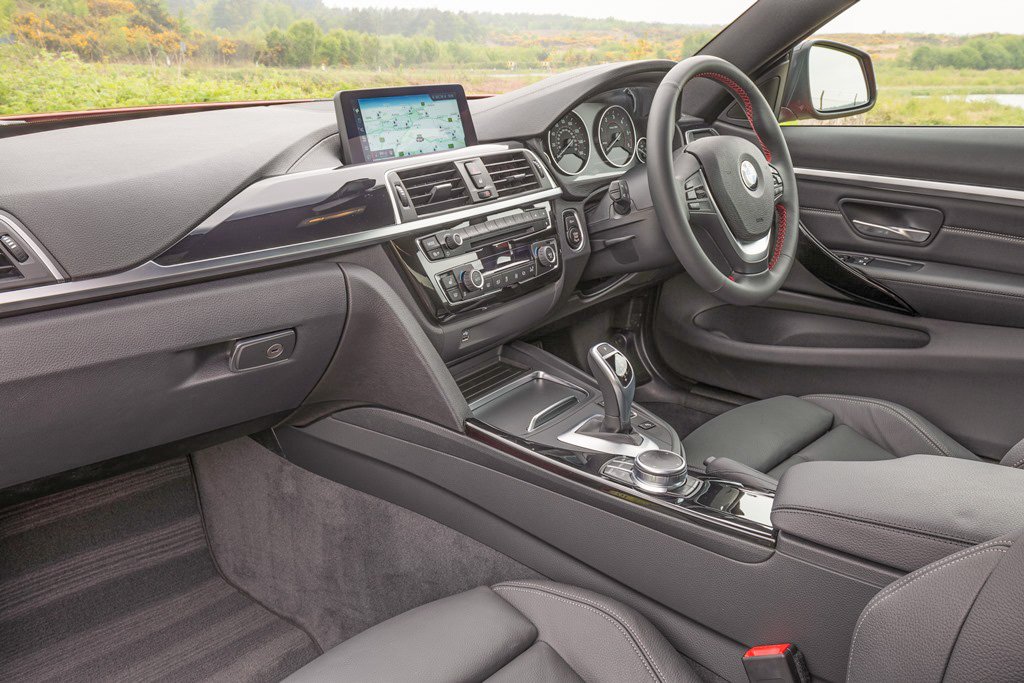 On the inside, there is little change of substance to warrant the existence of this section. However, I can tell you that an upgraded, three-spoke sports steering wheel fronts an enhanced instrument cluster, which in turn, now features double stitching around its soft leather-clad housing panel.

The well laid out centre console has fallen into the evil clutches of the ‘God-of-High-Gloss-Black-Trim’ (which is particularly irritating on the 4-Series convertible). It’s glaringly in-your-eye reflective and too attractive to dust–in a Jon Richardson, OCD kind of way. 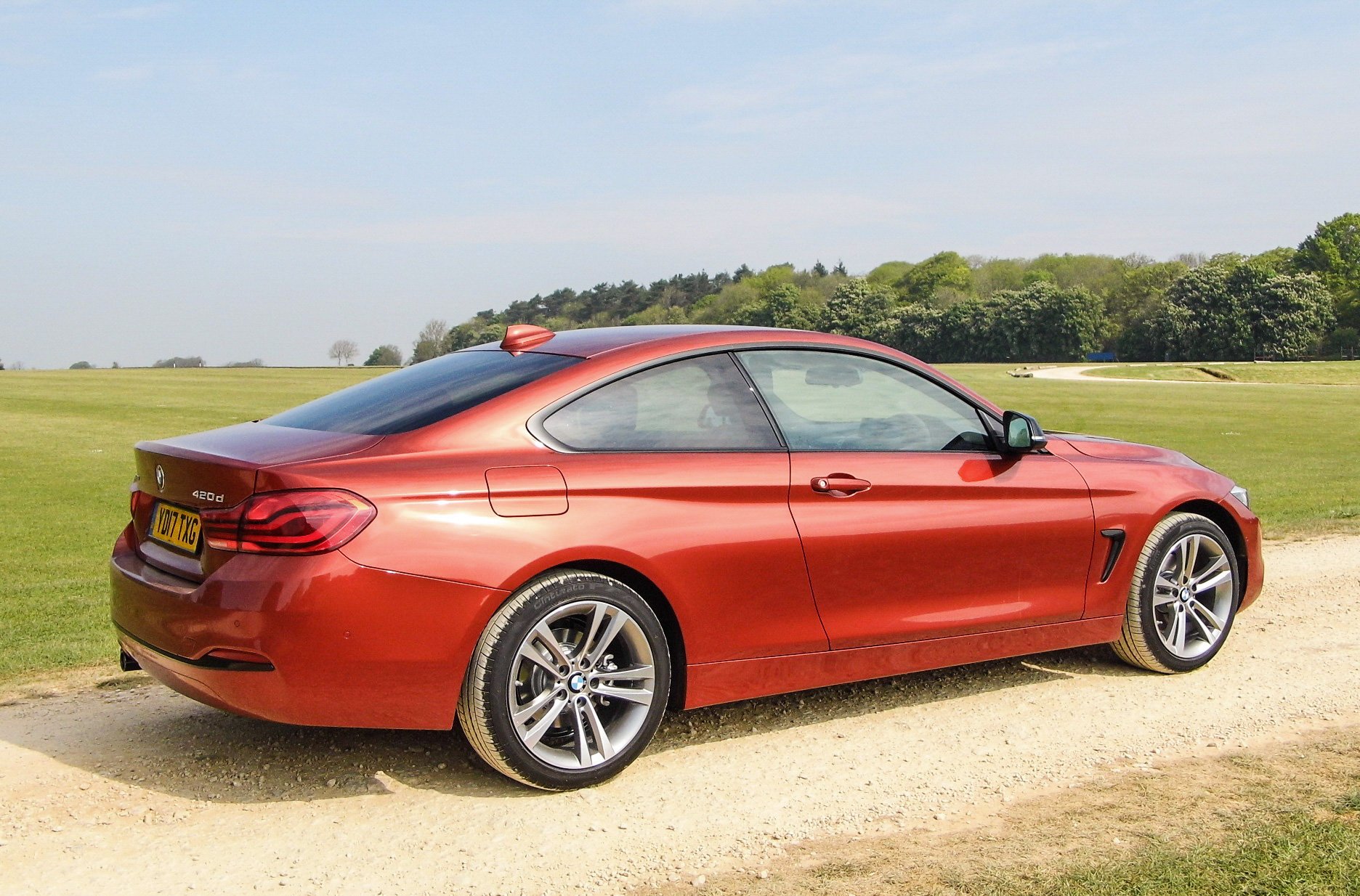 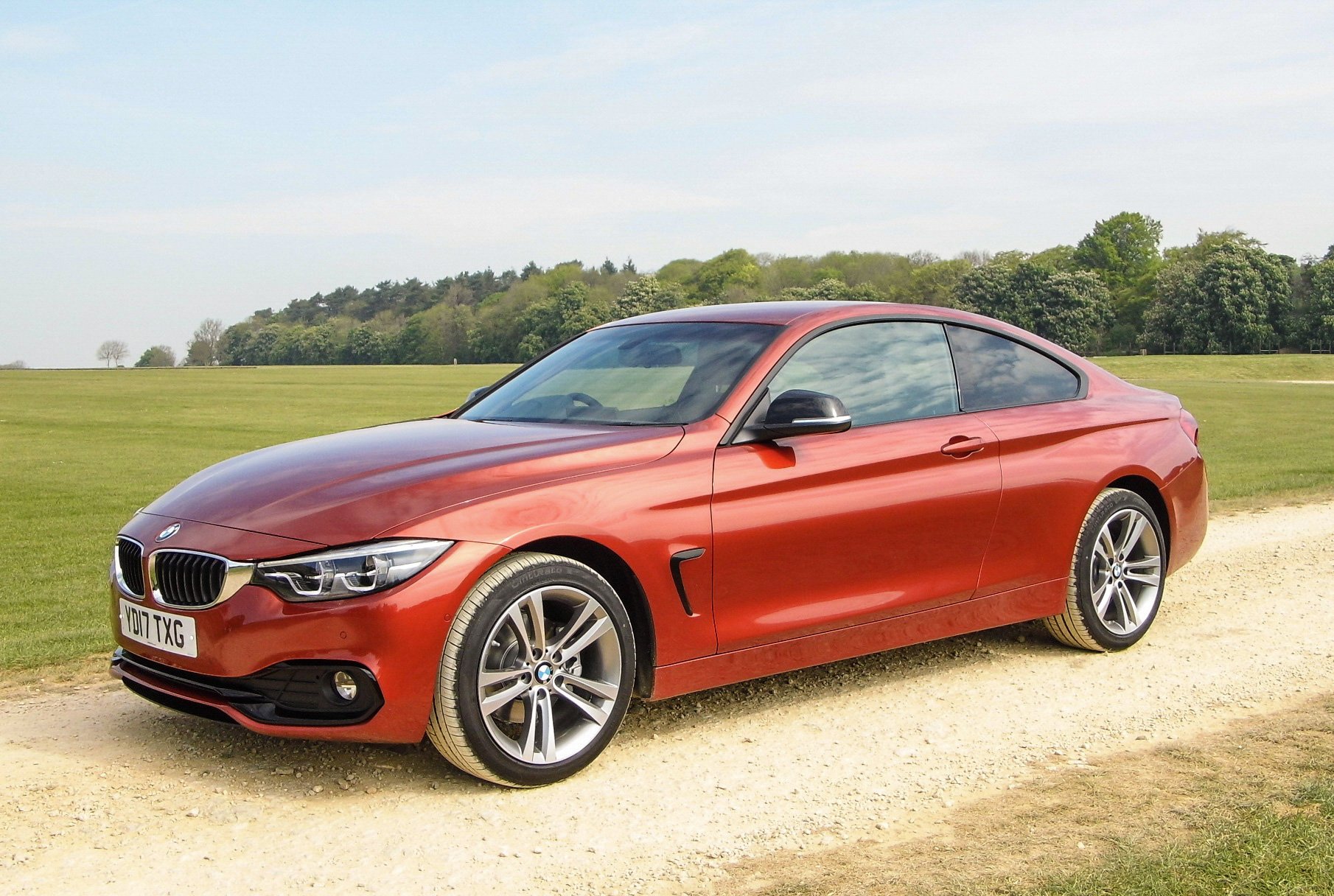 Engine-wise, the biggest UK seller in the 4-Series range is undoubtedly the 420d paired with the six-speed manual ‘box as tested. At the same time as being super economical, the 2.0-litre, four cylinder turbocharged diesel still produces a healthy 190hp and a whopping 400Nm from just 1,750rpm.

It’s the flexibility that sets this oiI-burner apart. Coupled to its 62.8 mpg frugality on the combined cycle, it also has the ability to sprint from 0-62mph in 7.3 seconds while fully exploiting that delicious mid-range grunt. Other, more potent diesels are available on the 4-Series, but the 420d offers just the right balance of power and driveability for this car.

Power delivery is super smooth and the diesel’s torquey nature means that it has more than enough ready reserve for overtaking on the motorway or for attacking your favourite B-road. It’s also remarkably quiet and refined (for a diesel), making it an ideal long-distance cruiser. 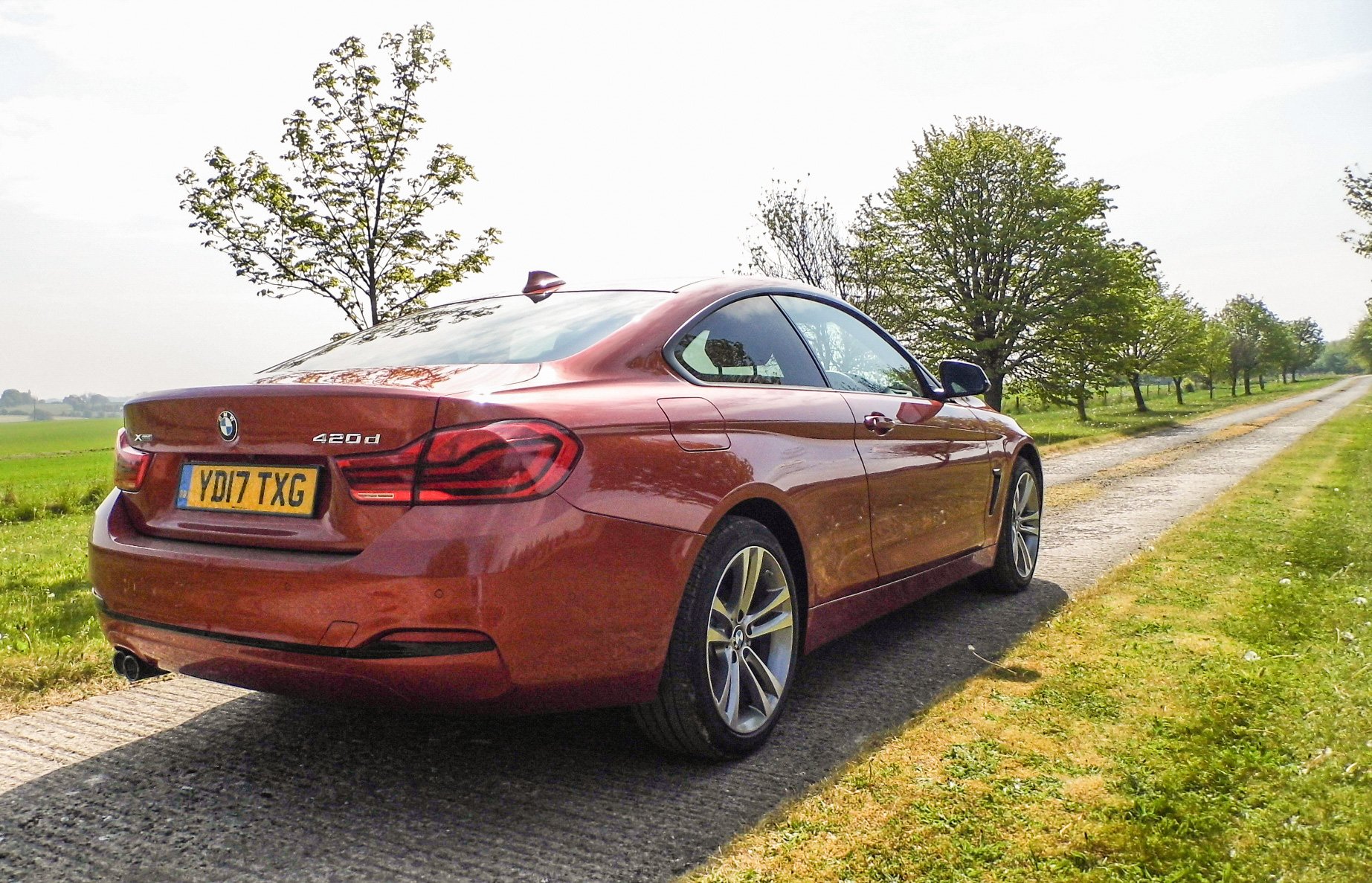 Since its introduction, the 4-Series has always been a very good car to drive with particular emphasis on driver focus and engagement. This ’17 model year version has a few sub-skin tweaks to further improve and refine its on-road behaviour. Most notably, the chassis and suspension on the Coupé and Gran Coupé now have a stiffer set-up which has been cleverly re-engineered to deliver sportier handling without the pro-rata loss of ride comfort. Both the lateral and longitudinal dynamics have been improved to increase feedback while producing a more neutral response on the limit.

Balance is the keyword here and, with a lower centre of gravity and a wider track than its 3-Series sibling, it’s just that bit more agile and makes for one of the very best driving cars in its segment.

To be sure, the six-cog manual gearbox in the test car was a lot of fun, but if I was parting with my own money I would certainly opt for the eight-speed automatic. It’s super-refined, much less fuss and more forgiving in congestion and stop-start traffic. 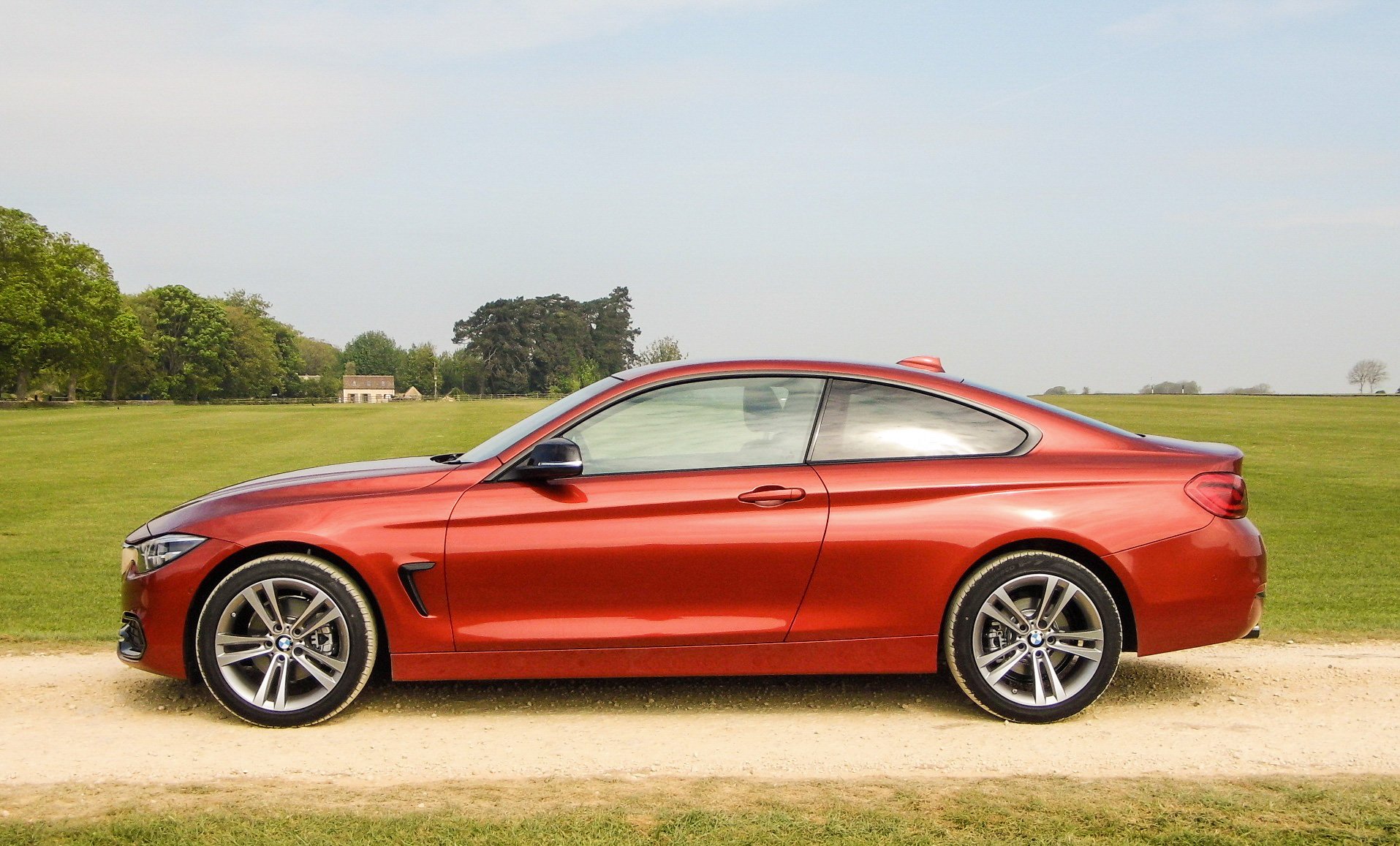 No one would honestly expect new lights and some updated exterior and interior trim to transform the BMW 4-Series, but this new model really is as good as ever. It looks great in M Sport trim, is loaded with top-end kit and in this 420d guise is remarkably efficient.

What’s more, it’s better to drive than most of its rivals and the 420d offers an excellent balance of performance and economy. On the road it’s comfortable and quiet but many (myself included) may prefer the excellent auto to the manual test car, so keen drivers shouldn’t overlook the extra satisfaction this one offers.

The revised BMW 4-Series is one of those cars able to tick a lot of boxes for multiple-demographic buyers. While the 2017 updates are barely noticeable, it only goes to show what an excellent all-rounder the 4-Series already was.

Take a look at our latest BMW 4-Series deals here

We continue this month's focus on executive saloons with a look at BMW...