Both are proffered as a combination of expanded interior space and practicality, plus a good deal of comfort and the engaging driving qualities expected of BMW. 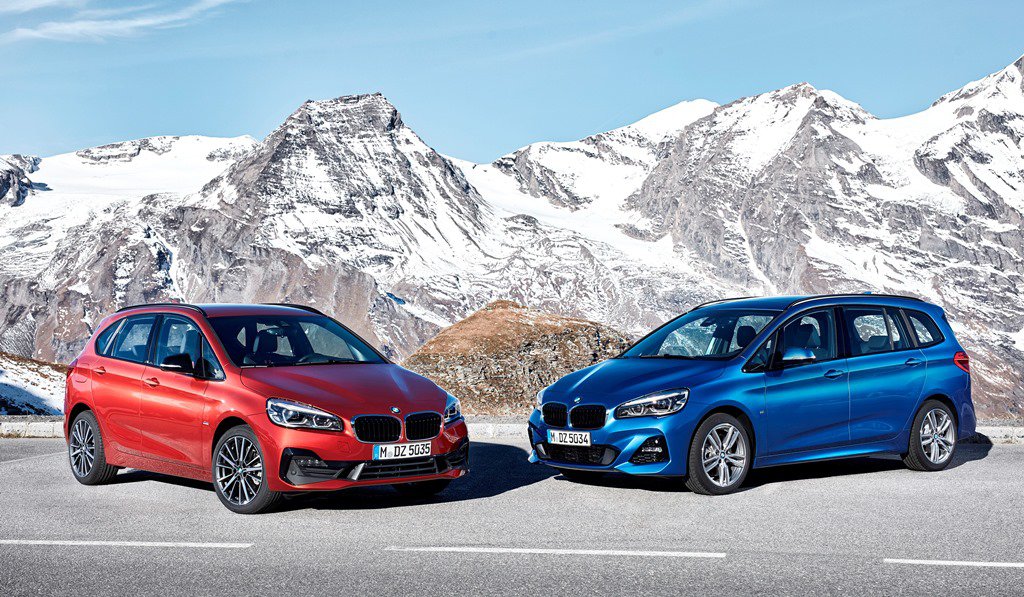 With the 2 Series Active Tourer, the Bavarian carmaker made its belated entry to the MPV segment in 2014, in answer to the rather librarian Mercedes-Benz B-Class. The new model shook BMW purists to the core with the firm’s first foray into the front-wheel-drive genre. The longer wheelbase Gran Tourer followed a year later.

On the sales front, BMW has done quite well out of the model with some 380,000 units sold worldwide in the intervening four years. We in the UK are the third biggest market for the 2 Series MPV and have bought more than 20,000 Active Tourers and 12,000 Gran Tourers since their respective arrivals. Earlier this year, both BMW 2 Series Tourers received light-touch makeovers to keep them fresh to market. During our glorious summer, I spent some time behind the wheels of these two shapely family shifters and filed this report…

The exterior upgrades are very subtle, but are there for the more astute to discover. The LED headlights now adopt a more hexagonal look in line with recent BMWs, while the light-emitting diodes at the back exhibit different graphics. Also new are the LED fog lamps, a lightly updated kidney grille, and the single-piece air intake. 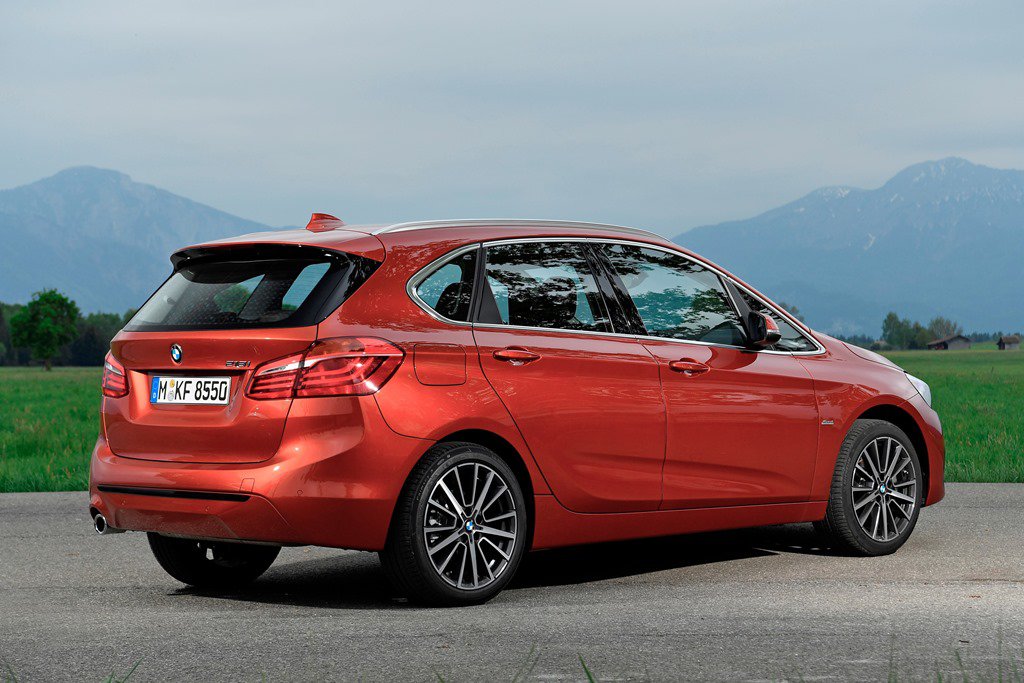 Both the five-seat Active Tourer and the seven-seat Gran Tourer added Jucaro Beige and Sunset Orange to its 13 exterior paint options as well as six new alloy wheel designs varying in size from 17 to 19 inches. The unique Estoril Blue is reserved exclusively for the M Sport trim model. 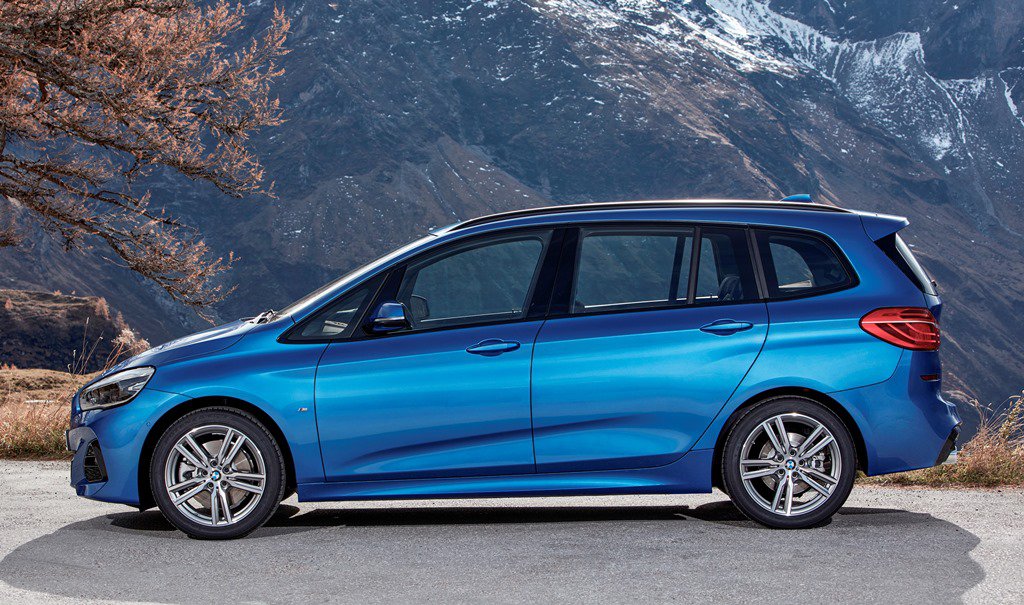 Bigger exhaust tips have been installed and if you go for one of the four-cylinder models, BMW will be more than happy to install dual exhaust setup.

For its 2018 model year, the 2 Series Tourer receives an updated instrument panel and the iDrive has been upgraded in line with the rest of the BMW range. That’s pretty much it…bish, bosh, job done. 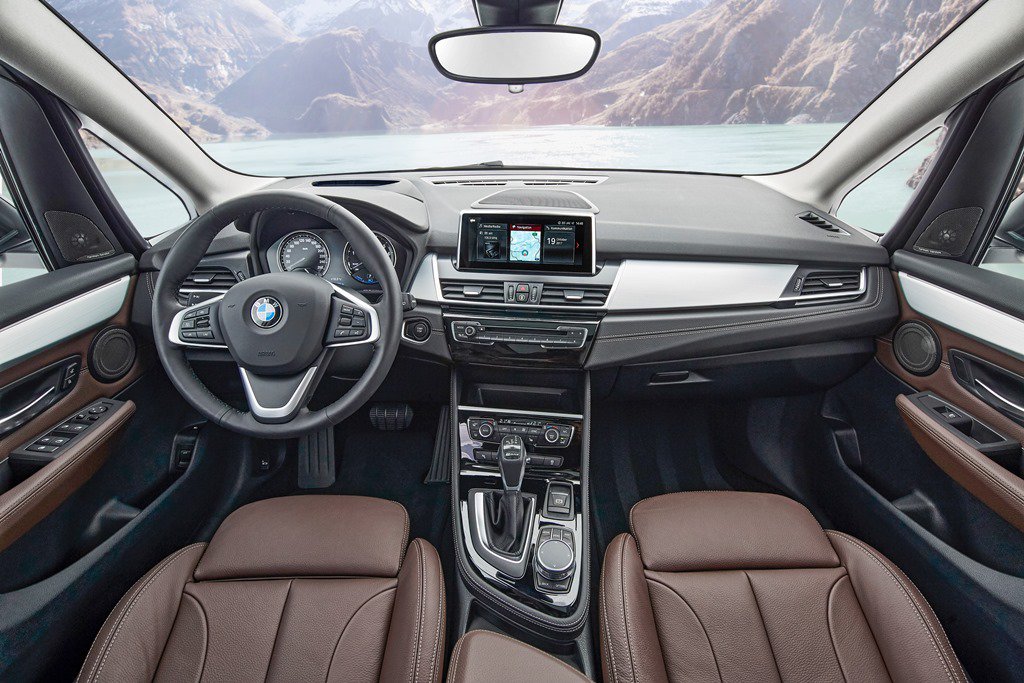 Up front, both 2 Series Tourers are exactly the same, which means you get typical, plush BMW material quality and impressive comfort levels from the supportive seats. As in the back, there are plenty of cubby holes and storage bins, plus you can specify a fold flat passenger seat for those long items such as flat-pack book cases. Access to the Gran Tourers third row is quite good, while the middle row is really versatile. The seats slide back and forth in a 60/40 split, with a 40/20/40 split for the folding back rests, plus there are three-abreast Isofix points for child seats. Head and leg room are very generous indeed – adults will be more than comfortable in the back, in part thanks to a higher roofline than the Active Tourer.

Other practical touches include picnic tables on the back rests of the front two seats and there are also various cubby holes for odds and ends or drinks - all of the door pockets can hold a 1.5-litre bottle, for example.

Boot space in the five-seat Active Tourer is a goodish 468 litres with row two in place. However, by sliding the rear seat unit forward and folding down the 40:20:40-split backrests, an impressive 1,510 litres becomes available. Obviously, on the seven-seat Gran Tourer, there’s a bit more load space for a busy family’s daily detritus. With row two in place and row three folded into the boot floor, there’s a healthy 560 litres of space available. However, when all seven seats are in place, there's not much room for your kit with just 145 litres of space on offer. But, to be fair, that's more than what's on offer in the seven-seat Volkswagen Touran with all furniture raised.

With both rows folded flat, the BMW 2 Series Gran Tourers carrying capacity grows to 1,820 litres – a figure which trumps every other BMW apart from the marginally more space on the X5 SUV. The trim structure is similar to other BMW models – there is the range-entry SE model, plus Sport, Luxury and M Sport. Standard equipment is surprisingly generous – all models get iDrive with navigation, along with DAB, auto lights and wipers, city emergency braking, dual-zone climate control and 16-inch alloy wheels on the SE. Efficiency is the focus for the majority of powertrains offered by BMW these days and, as you would expect, both 2 Series Tourers get an excellent range of engines – the majority of which offer spritely performance along with affordable running costs. There are both three and four-cylinder options in both petrol and diesel forms, with power outputs ranging from 140-190hp. The 220d 2.0-litre diesel has become an early popular choice thanks to being able to shove itself from 0-62mph in 8.2 seconds and real-world fuel economy of more than 50mpg. Its substantial mid-range performance will also prove useful when the BMW’s packed to the rafters with people and stuff – plus, it remains quiet and smooth even when rushed.

That said don’t be put off by the smaller 116d diesel or three-cylinder 118i petrol if you spend the majority of time in town. They’re cheaper to buy and run and will feel easily up to the job of town work when full to the brim with a big family and their stuff.

The 2.0-litre diesel paired with a four-wheel-drive system in the 220d xDrive seems a tad over the top. Sure, the engine makes for very rapid progress, with a 0-62mph time of 7.8 seconds, but given the car’s intended purpose of family motoring, I think its place in the line-up is erroneous. Three transmissions are available on the BMW 2 Series Tourer: For the higher-powered engines, the eight-speed Steptronic automatic gearbox is slick between changes and smooth around town.

The newly-introduced seven-speed dual-clutch unit that’s available on other models is smooth on the move but can be jerky around town. As for the manual on the lesser-powered engines, it’s easy enough to use but with a longish throw it isn’t the nicest shift around.

The smaller 2 Series Active Tourer secured the maximum five-star rating from Euro NCAP at its original launch in 2014. The larger Gran Tourer has yet to be tested but, owing to its mechanical and structural similarities, it is safe to assume that the seven-seater will perform very similarly. A lot of safety kit comes as standard on the 2 Series Tourer. A vast number of airbags are featured, including full curtain ones, along with the usual electronic stability and traction control systems. Additional safety features like the Driving Assistant, which includes city braking, lane departure warning, a speed limit detector and 'Forward Collision Warning" which uses a fleet of sensors to apply the brakes if the driver doesn't respond to a potential front collision.

Unsurprisingly, BMW just can’t help itself. Not all buyers will prioritise an entertaining driving experience, but BMW is a brand that is compelled to put together cars that handle better than most.

Being the nature of the MPV beast, the BMW 2 Series Tourer doesn’t handle with the same degree of involvement as the firm’s sportier offerings, it does set a new standard for compact MPVs. Nothing else in this segment feels as rewarding to thread through a series of challenging corners. Such is the degree of finesse dialled into the handling setup, most drivers would be hard-pressed to notice most 2 Series Tourers are front-wheel drive – you really do have to press on with gusto into bends to feel the BMW gently push wide into a predictable, safe understeer.

Whichever 2 Series Tourer you choose there’s a well-judged weight to the steering and a satisfying degree of feedback to judge the levels of grip the front wheels are experiencing. But, whether most people-carrier customers want a car that they can pilot confidently through a series of B-road bends, remains to be seen. Those that do will find that it corners relatively flatly, preventing passengers from rolling left and right in their seats like peas in a pod.

Less positive is the firm ride quality, noticeably less supple than the Grand C4 Picasso in particular. While the harshness of bumps isn’t transmitted to the cabin, the ride is firm enough to mean passengers feel most of the ruts driven over. There might well be less expensive or more practical MPV options on sale but, as an all-round family car for those who seek a bit of luxury, refinement and the prestige of that blue and white propeller up front, the 2 Series Active Tourer and Gran Tourer are two of the very best.

We've picked out our favourite wagons, all available right now on fant...