Audi A7 Sportback Review: All the style, all the substance

Audi’s luxury A7 Sportback is a five-door fastback version of the workaday A6 mid-sized four-door executive saloon. It has been around since 2010 and competes directly with the likes of the Mercedes-Benz CLS and BMW’s 6 Series Gran Coupé.

This is Audi’s second-generation A7 Sportback. It was revealed in October 2017 and underwent its international media launch in Cape Town earlier this year – to high acclaim. Designed by Audi’s head of design Stefan Sielaff (who also brought us the bullish A1), the A7 Sportback made its UK debut in the Spring and I thought it was time to have a closer look… 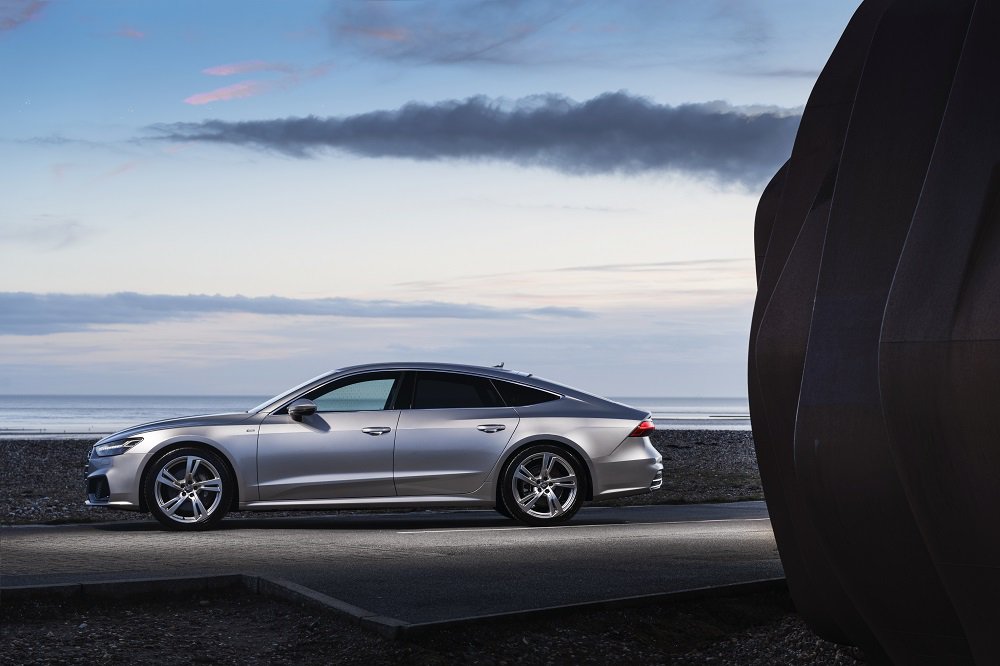 Given the enduring popularity of its predecessor, the initial attraction with the new A7 Sportback continues to be its stunning design. As a rival to the Beemer 6 Series Gran Coupé and Merc CLS, the new Audi does the ‘coupé-roof, luxury car’ thing so much better than those. I think it’s one of the best-looking executive barges currently available in the UK, including the new A8.

The five-door layout continues to make it one of the most practical cars in its class. The cabin doors are once again frameless, while the large tailgate hinges from above the rear window to provide unimpeded access to the cavernous luggage compartment. 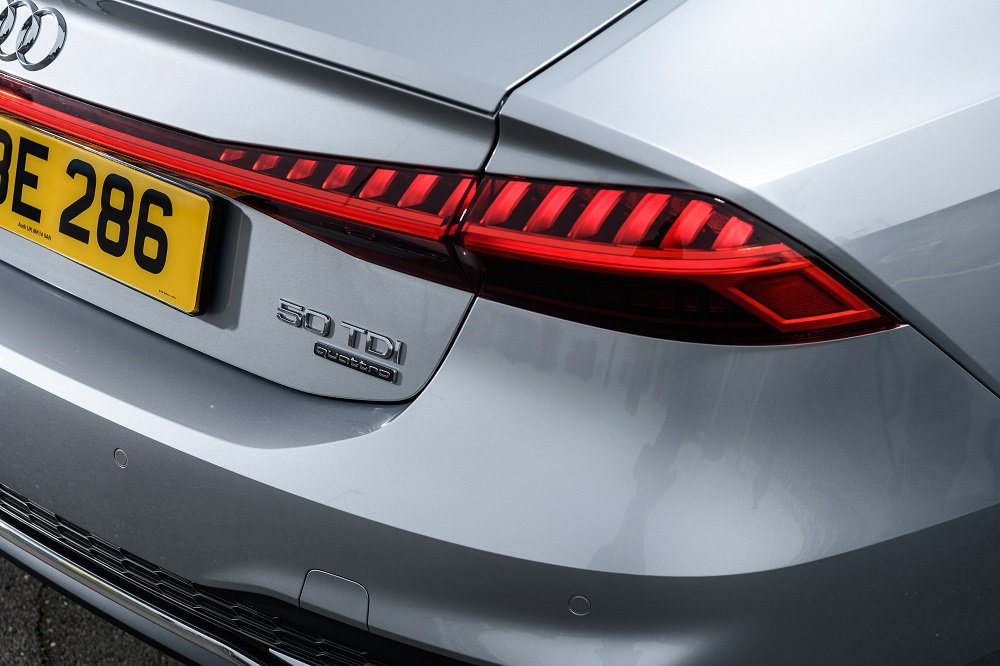 At the rear, Audi has provided an active spoiler integrated into the trailing edge of the tailgate. It deploys at speeds above 75mph to increase downforce on the rear axle for additional high-speed stability. The most dominant styling feature, however, is the full-width tail-light treatment. Each tail lamp has 13 individual OLED elements, joined by an illuminated LED light bar that stretches across the rear of the boot lid. When you unlock the new A7 Sportback via the remote on the key fob, the tail lamps light up with a strobe effect that enhances its standing as one of the most advanced and, arguably, stylish road cars on sale today. 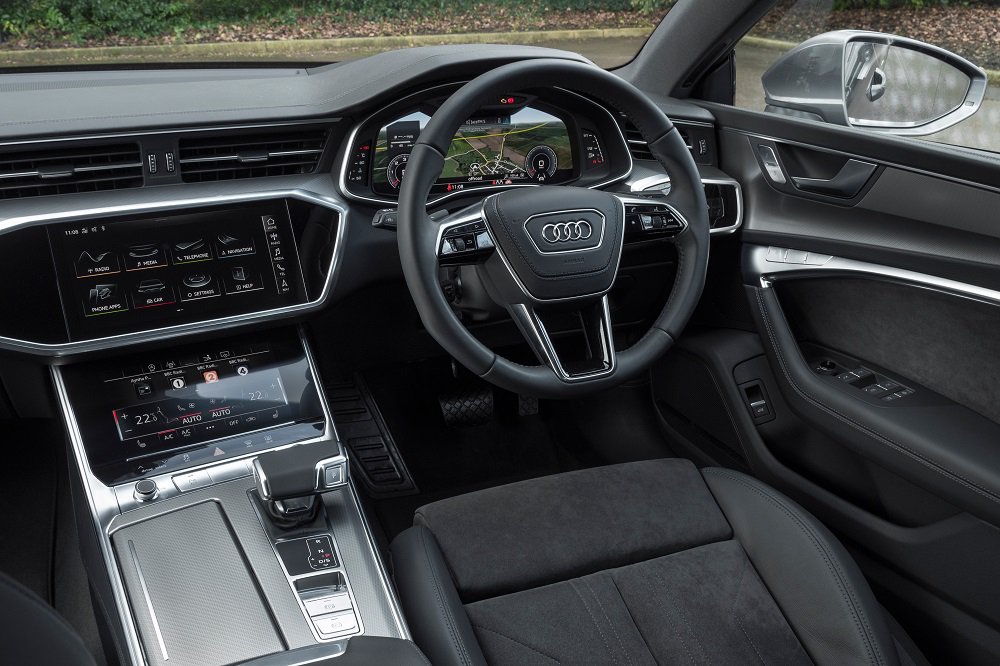 The 2018 Audi A7's interior is a welcoming place with upscale materials and very comfortable furniture front and rear with ample headroom in the back despite the sloping, coupé-style roof. Design and quality are several cuts above the previous model and now features the double centre screens first used in the A8.

The lower screen houses controls for the climate control and heated seats, suspension settings and related items. The upper screen provides systems such as navigation, audio, connected devices and the in-car wi-fi. Both screens are crystal clear but you do need to take your eyes off the road to adjust the air conditioning more than you would with a traditional dial or buttons. If you share my Jon Richardson-like OCD tendencies, you’ll spend an inordinate amount of time cleaning finger marks off both of them, too. 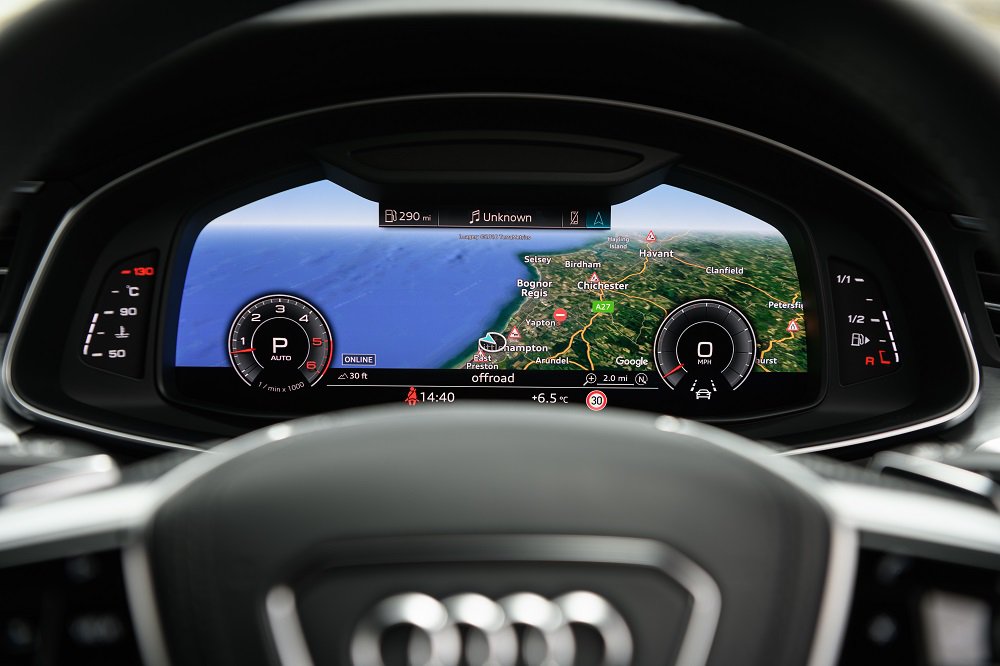 The rear seatbacks fold fully flat so that you can increase the boot space from 535 litres to 1,390 litres, making the A7's cargo space noticeably more practical than the A6, thanks to the rear hatch. 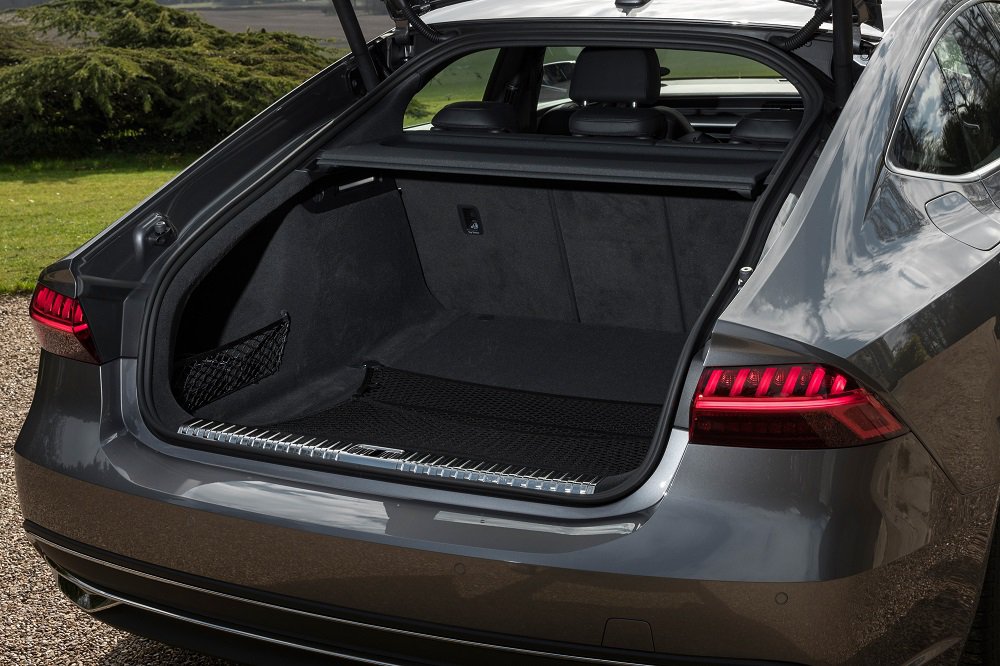 There are just two trims available on the A7 Sportback this time round – Sport and S Line. Standard equipment is, as you would expect at this level of luxury, extraordinarily generous.

Standard kit is too expansive to detail here, but includes LED headlights, autonomous emergency braking and lane-departure warning all thrown in, but customers can add a bewildering array of extras to boost the car’s tech count.

From the options list, LED lights with advanced laser technology (to see twice as far) can be specified, along with night vision, self-parking, a high-end Bang & Olufsen sound system, advanced air suspension, rear-wheel steering, adaptive cruise control and systems that warn you of oncoming traffic (front and rear) when pulling out of blind junctions or driveways. 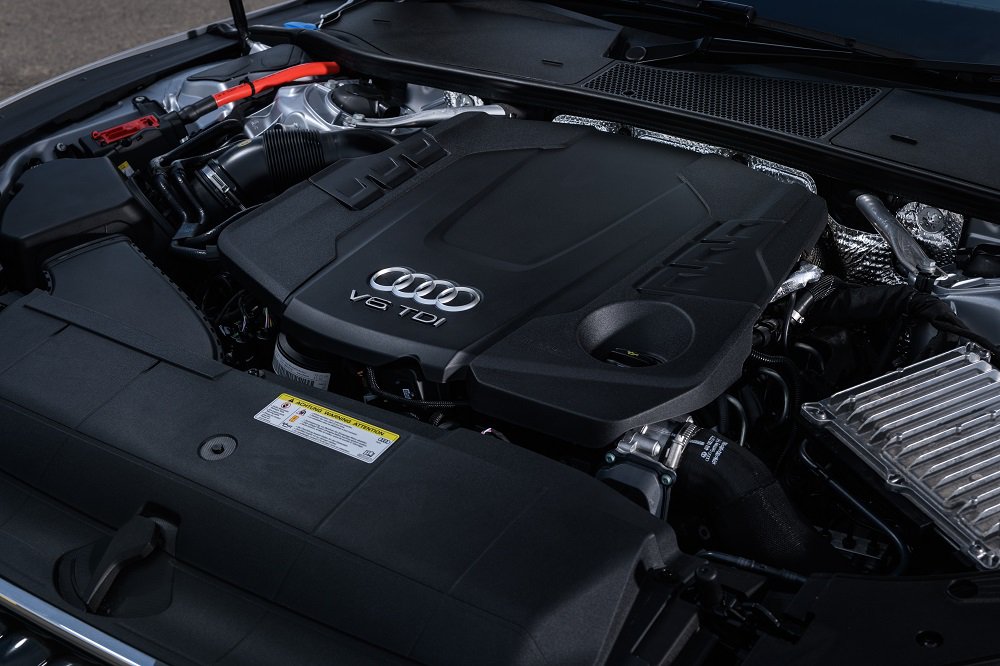 At launch, the A7 Sportback offers a choice of just two turbocharged engines; a petrol unit and a diesel. Both are 3.0-litre V6’s and deploy Audi’s iconic Quattro all-wheel drive. Both use mild hybrid technology which allows the A7 to restart much quicker after it’s stopped in traffic, as well as recuperate energy recovered from braking and coasting. The diesel uses the badge 50 TDI (under Audi’s new naming structure), while the petrol is called 55 TFSI.

The 3.0-litre V6 TDI diesel engine produces 286hp and 620Nm of torque, making it a bit of a beast for overtaking manoeuvres and effortless motorway performance. It uses an eight-speed automatic gearbox and Quattro all-wheel drive (all A7s come with Quattro) and wafts the A7 along with ease. The all-wheel drive assists greatly in achieving the 0-62mph sprint time of 5.7 seconds, topping out at a limited 155mph. 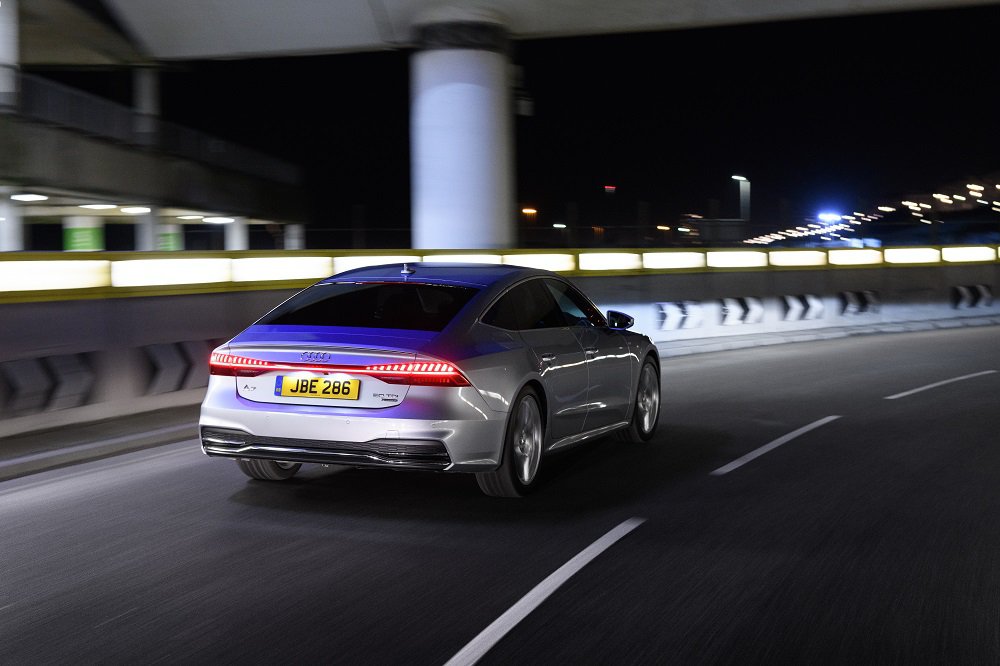 On the move, it’s a rather refined engine unless you really push hard and rev it out to get up to speed. Then you’ll realise it’s a diesel, but otherwise it’s a smooth, hushed performer that hauls along the A7 with ease.

Again, thanks to its Quattro all-wheel drive, off-the-line traction is guaranteed. However, the auto’box displays hunter-gatherer characteristics by taking its time to decide which gear to be in and sometimes making progress a little less smooth than you might expect.

The 55 TFSI petrol engine is also a 3.0-litre V6 unit, producing 340hp and 500Nm of torque. With Quattro all-wheel drive and a seven-speed S Tronic gearbox as standard, the 55 TFSI will complete the 0-62mph sprint in 5.3 seconds, and will also go on to reach 155mph like the diesel.

Four-cylinder petrols and diesels will join the range at a later date, bringing in more economical and efficient options, which will likely appeal to company car drivers in particular. 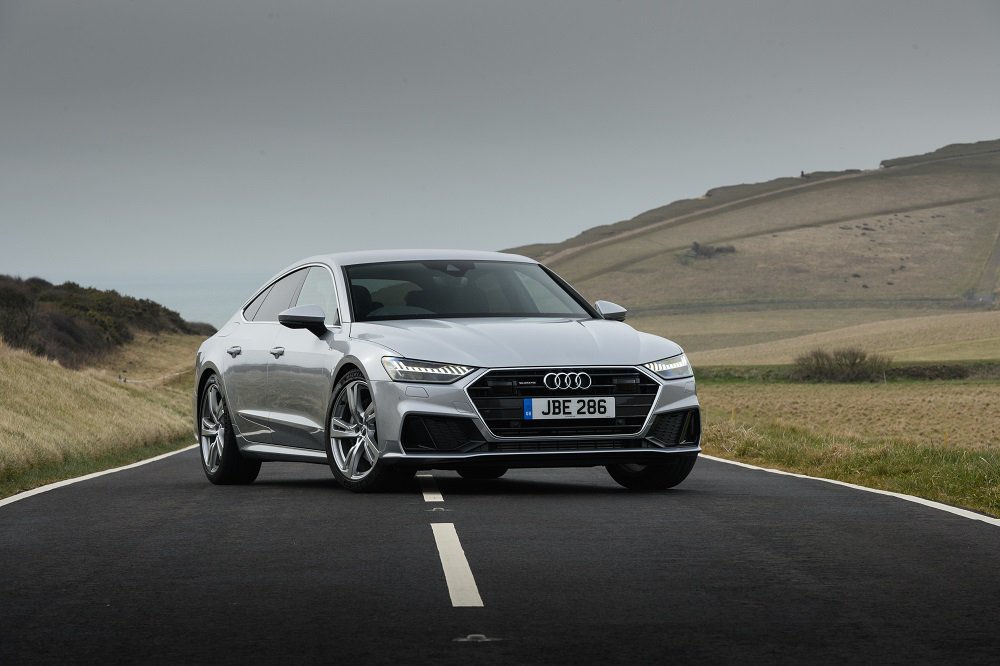 The manner in which your A7 Sportback will handle depends largely on which model you go for and whether you opt for any non-standard suspension and damping set-ups.

While the A7 Sportback Sport comes with steel suspension, the higher-spec S Line comes with 10mm lower suspension that has a noticeable impact on the way the car rides. It’s much firmer and it can feel a little fidgety, not helped by the large 20-inch alloy wheels fitted as standard. The Sport has smaller, 19-inch alloys.

The optional adaptive suspension can be selected to configure the way it rides and handles, or you can opt for air suspension which improves things considerably. If you want the car to be floaty, it can deliver, but it can also be firmed up. It works well as the A7 has excellent body control in all set-ups, anyway.

There is also the optional rear-wheel steering, which buyers can only spec with one of the other optional suspension set-ups. It works by turning the rear wheels against the front ones at low speeds to boost manoeuvrability, while at higher speeds normal transmission is resumed at the front for better stability. 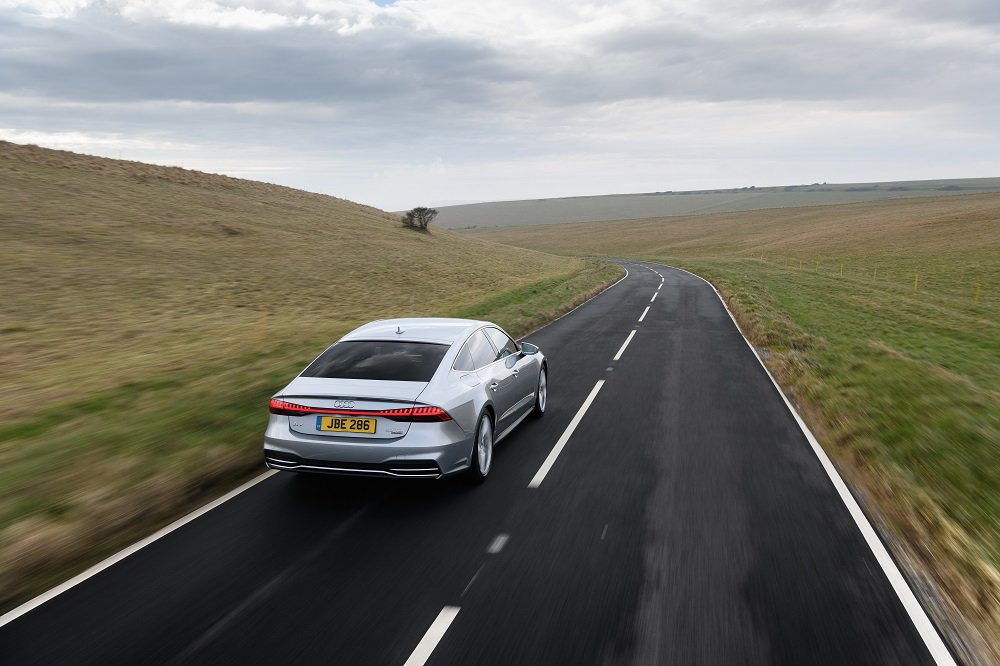 On a set of B-road twisty’s the big A7 feels much more agile than its heft suggests, especially with rear-wheel steering. Mind you, it can take a little getting used to and you may find yourself turning into a corner a bit more enthusiastically than you had originally intended.

However, once used to it, it all combines to make the A7 feel light and agile and quite a good deal of fun if you tweak the settings in the ‘drive select’ system. Here you can change how comfortable you want the suspension to be, the weight of the steering and how the throttle responds. 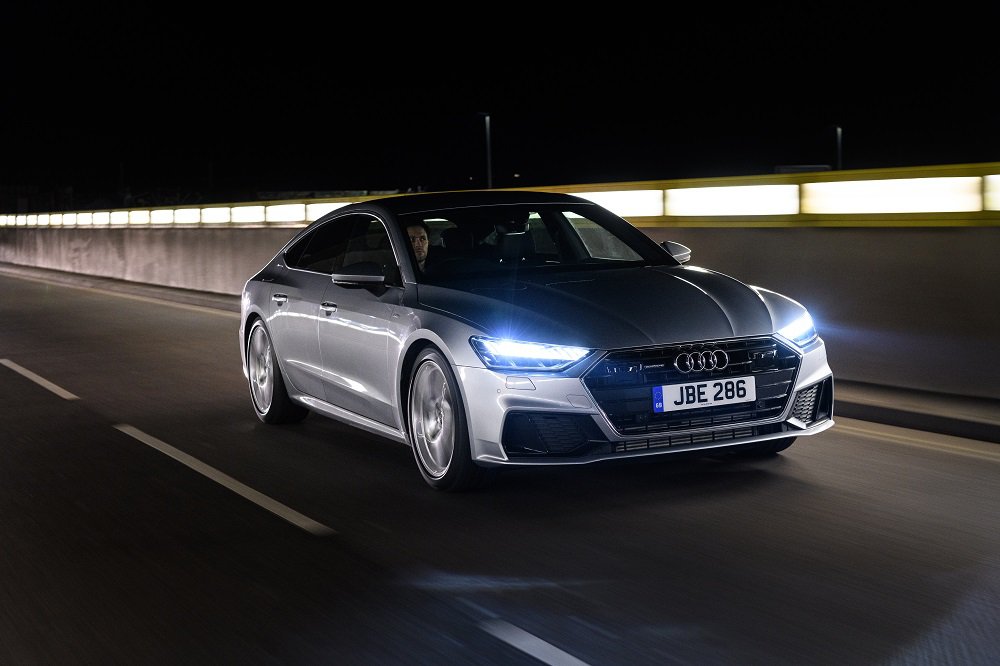 The steering is overly light and doesn’t offer much in the way of feedback from the road. Most drivers will leave it in Comfort or Auto, making things nice and easy, but not so vague as to negate any level of driver confidence.

Road and engine noise are both exceptionally well suppressed at speed, which is impressive considering the size of the tyres and how slabby the front end of the car is. There is noticeable wind noise around the door mirrors and windows though, but this isn’t too surprising as the windows are frameless and feature slightly less insulation than a traditionally framed door. But it’s never intrusive and the A7 would be a very relaxed car to spend lots of time in. 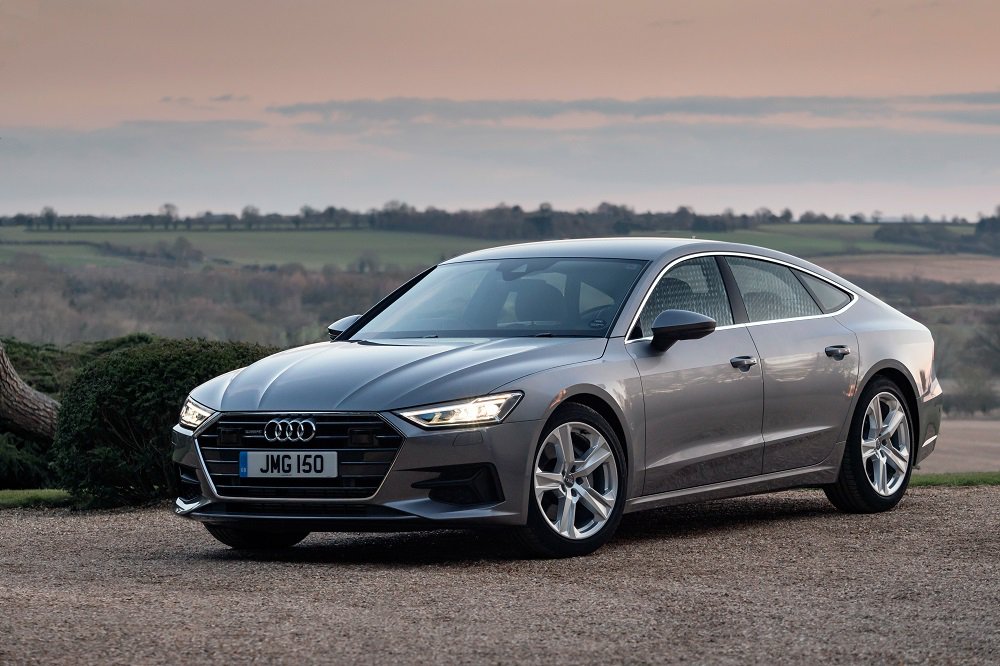 If you’re seeking a luxury car but don’t like the idea of a conventional sedan, want five-door practicality but the thought of an estate simply doesn’t appeal, then the new Audi A7 Sportback is certainly worth consideration.

Few cars at any price manage to combine style and technology with engaging driving dynamics and satisfying refinement the way this car does. The success of the first generation A7 Sportback proved there is a market for high-end, coupé-like fastbacks and this new one should continue in very much the same vein.

It’s the type of car that’s unlikely to go mainstream, but it’s that very uniqueness that will make it attractive to prospective buyers.