Volkswagen recently built its 150 millionth car and nearly one in 10 of those have been Polos. Initially a rebadged version of the 1974 Audi 50, the humble Polo has come a long way since the first models rolled off the Wolfsburg production line back in 1975.

Let’s be clear…this sixth generation 2018 Polo is not a facelifted model. It is totally new in all respects and is leaps and bounds away from its 2009 predecessor. It now rides on VW’s versatile MQB-A0 platform architecture specifically developed for the VAG Group’s range of small cars and SUVs and was first deployed in the much-improved SEAT Ibiza. It will also make its way to the new Škoda Fabia and Audi A1 in due course. The new platform has afforded the Polo a significant growth spurt. It is now 81mm longer and 63mm wider than its predecessor and its wheelbase has expanded by 92mm longer. Track widths are up by 62mm at the front and 49mm at the rear, giving it a substantially larger footprint. Like the new Ibiza, the new Polo will be produced in five-door hatchback form only as the three door body style has been discontinued after 42 years. New exterior details like a strong shoulder line, more prominent wheel arch detailing and more expressive headlight and taillight assemblies make the new Polo a very smart and modern looking car. A small, third side window behind the rear door extends the glass area to underline the car’s extra length, while a distinct horizontal line running under the tail-lights accentuates its increased width. The new car is also 7mm lower than before and looks more substantial, stable and better poised as a result. 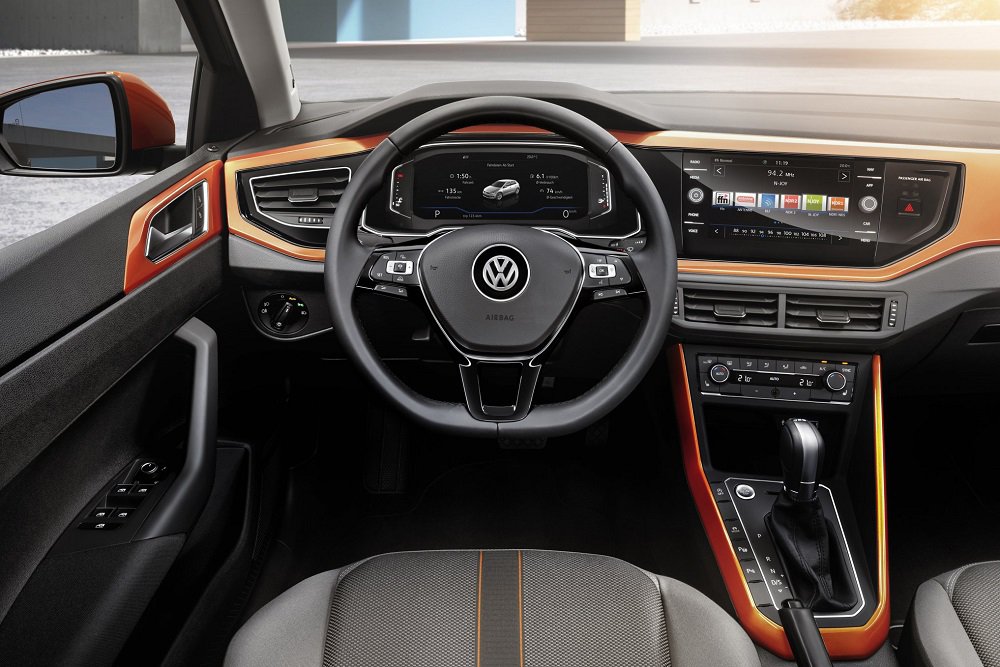 Inside, the new Polo offers a pleasant balance between traditional Volkswagen simplicity and a much-needed youthful design flare. Following the now familiar trend for customisation, the high-mounted dashboard is available with a wide range of different trim elements and eight colour combinations and features familiar analogue instruments and an eight-inch colour touchscreen as standard. VW’s 11.7in ‘Active Info Display’ digital instrument system is available as an option.

The dashboard materials, in the top section at least, are soft to touch, with expensive-looking texturing. The front seats offer a wide range of adjustment and are supportive with firm cushioning and good side support. Additional interior space means the Polo can now more easily accommodate adults in the rear. Front headroom has been increased by 15mm and rear headroom climbs by 21mm with plenty of foot and legroom easing the burden when relegated to the rear.

The boot now has a 351-litre capacity, which exceeds that of all of its key rivals; the Fabia, for example, offers 330 litres of space and the new Fiesta a paltry 292 litres, by comparison. Except the entry-level S spec, there’s a height-adjustable boot floor that ensures there’s no step in this extended load area and a 60/40 rear seatback split. 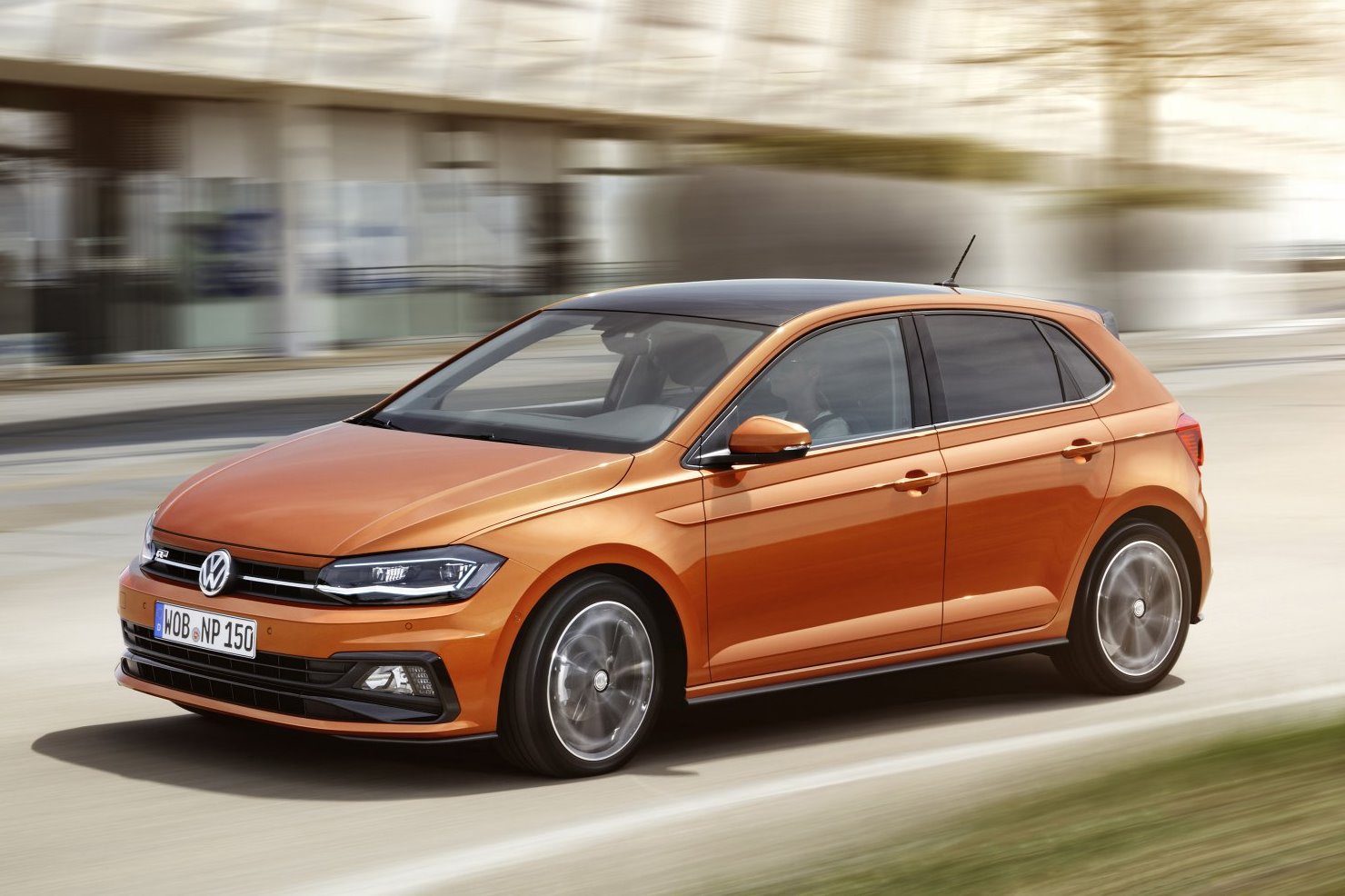 The new Polo draws on VW’s strong turbocharged engine line-up including a range of 1.0-litre, 1.5-litre and 2.0-litre petrol units and a 1.6-litre diesel in two states of tune (80ps and 95ps).

All of the 1.0-litre petrols are three-cylinder engines in 65ps, 75ps, 95ps and 115ps states of tune. Economical, torquey and revvy in character, they don’t need to be worked hard to keep up with moving traffic. The 1.5-litre (150ps) and 2.0-litre (200ps) are VW’s four-pot workhorses available on the warmer GTi models. Fuel economy for the three-cylinder petrols ranges from 58.9 to 64.2 combined, with CO2 emissions in the 101 to 110g/km band. 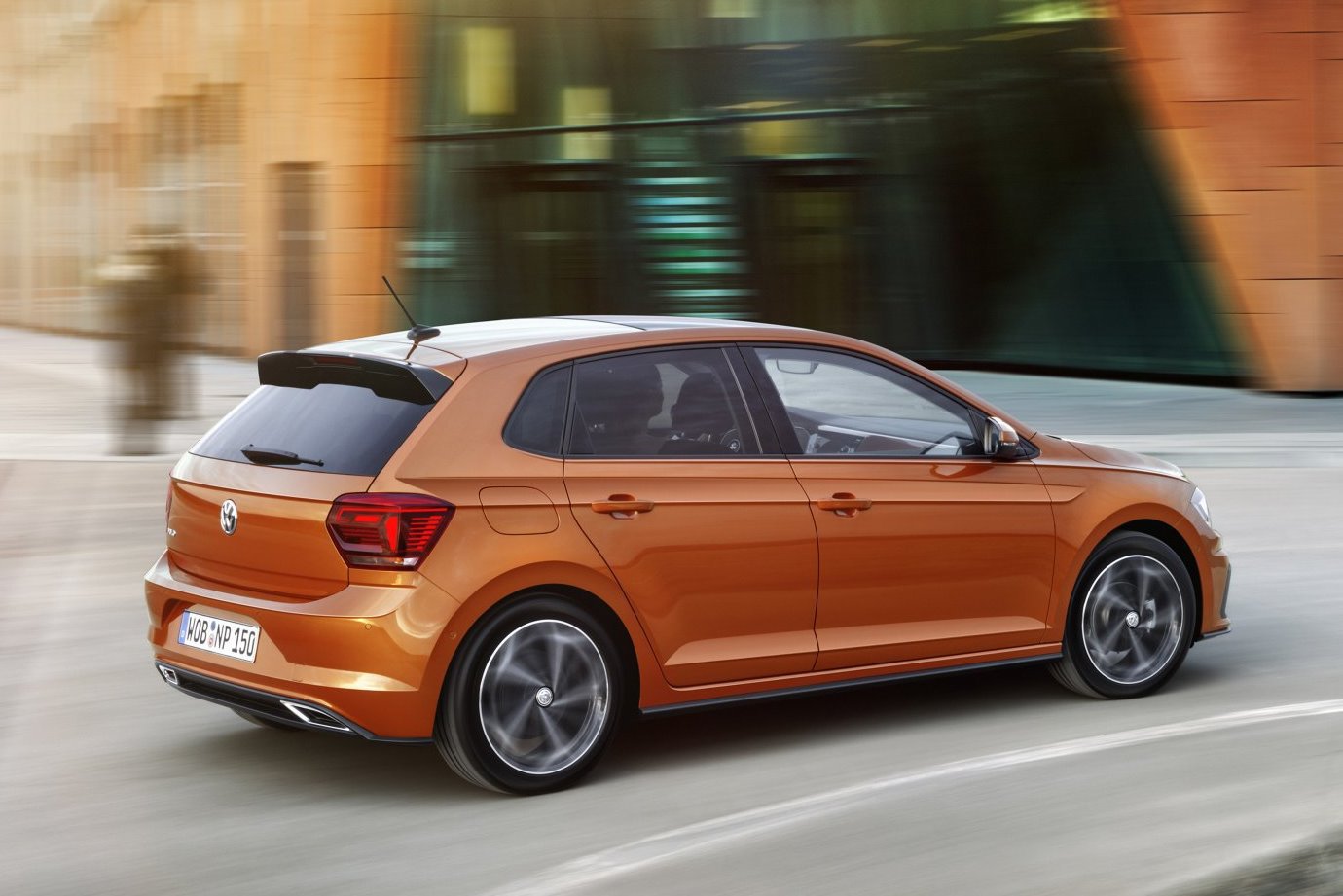 The MQB-A0 platform has brought a significant increase in rigidity and stiffness over the old Polo and the result is a supple and superbly controlled ride. The combination of excellent damping and absorption qualities bring a welcome calmness to the chassis, making for relaxed traits, both around town and on the motorway.

The wider track helps the front wheels grip well, resisting the urge to push out through tighter bends. The body movements are also nicely controlled, with very little lean through corners.

Light and precise electric power steering makes the new Polo impressively manoeuvrable in tight spaces and it feels right at home in city traffic. Dynamically, it is a clear improvement on the earlier Polo but compared with some rivals it lacks an engaging character to make its handling truly entertaining. The 2018 Volkswagen Polo has expanded in both size and substance, offering more technology and style to mirror the recent changes to its bigger stablemate, the Golf 7.5. It’s also a thoroughly well-built car with exceptional quality and finish to match any rival hatch but you do detect the odd cost-cutting measure in the cabin but this is acceptable in a fiercely competitive sector.

In many areas the 2018 VW Polo feels (and looks) more like a smaller Golf than ever before, reaffirming its class-leading status. Aside from a little more space, the question is: Why would anyone consider the Golf over the Polo?

Yes, it really is that good.