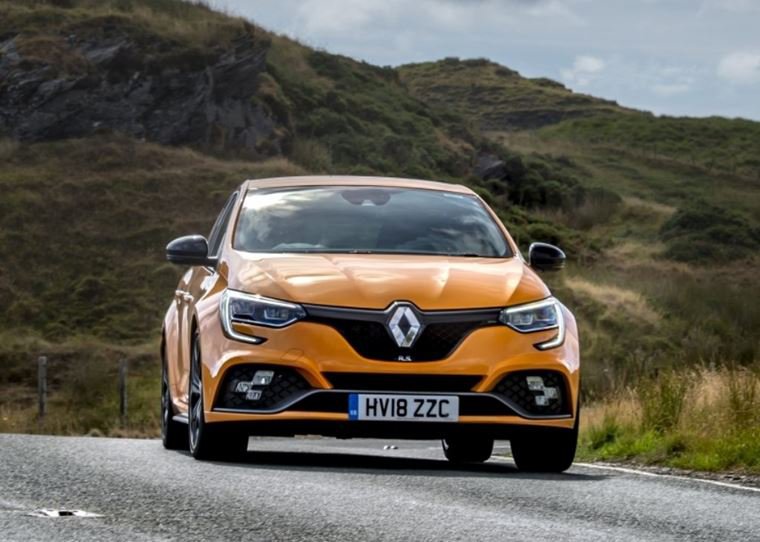 Renault was one of the original hot hatch pioneers, transferring race tech to the road through Renault Sport which was established in 1976 from the merger of two separate Renault-owned racing divisions, Gordini and Alpine.

With a trophy cabinet bulging at the seams, Renault Sport turned their attention to road cars with early hot hatches such as the Renault 5 Turbo, its GT offshoot and the 5 Gordini. And who can forget the mad-as-a-bag-of-frogs F1-Team-inspired Mégane R26.R from just ten years ago. 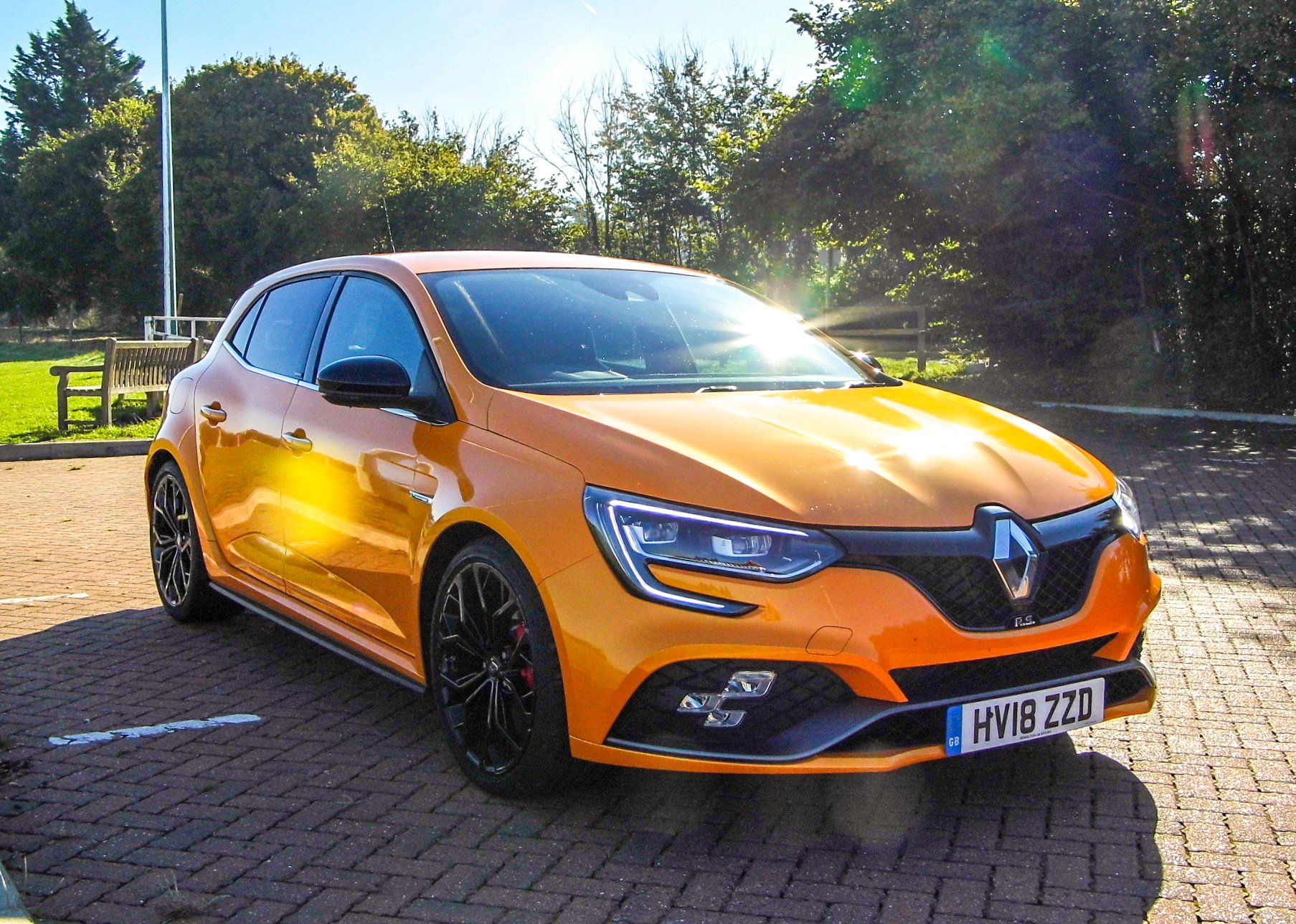 I recently enjoyed the privilege of piloting the latest Renault Sport product around our glorious autumnal English countryside. Once the blood had returned to my lily-white knuckles, I made a few notes…

If you think Civic Type R is a tad too juvenile and Golf GTi is clinically Germanic, wait until you see this French beauty in the flesh. 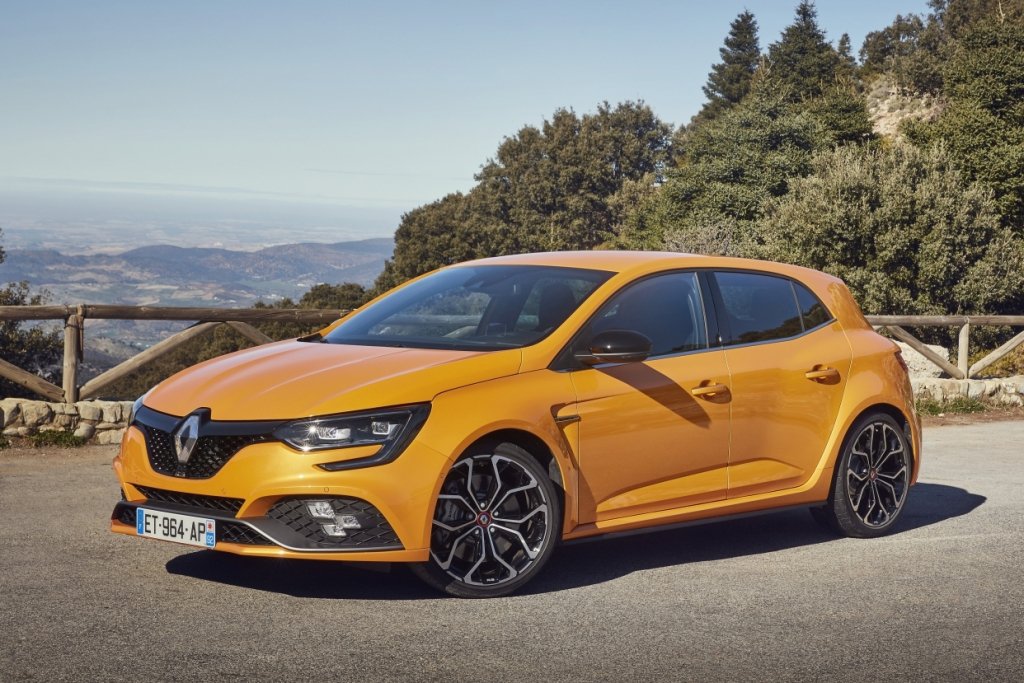 The Volcanic Orange worn by the test car was not exactly subtle, but it’s probably the test car’s most subtle aspect. I liked it but many would prefer the traditional Renault Sport’s team colour of ‘Liquid Yellow’.

With the exception of the colour, the next visual impact is the number of doors – now four instead of two, which won’t please the purists but will broaden its appeal. If it wasn’t for the four-door body style, the new Mégane RS wouldn’t exist due to the drop in demand for three-door hatches globally. Next year’s KIA’s ProCeed will also only be available as a four-door.

Musclebound, you can't miss those bulging wheel arches on the new Mégane RS, needed to cover the 19-inch alloy wheels and tracks which have been widened by 60mm at the front and 45mm at the rear. They cost Renault a lot of engineering money to adopt over the regular Mégane. 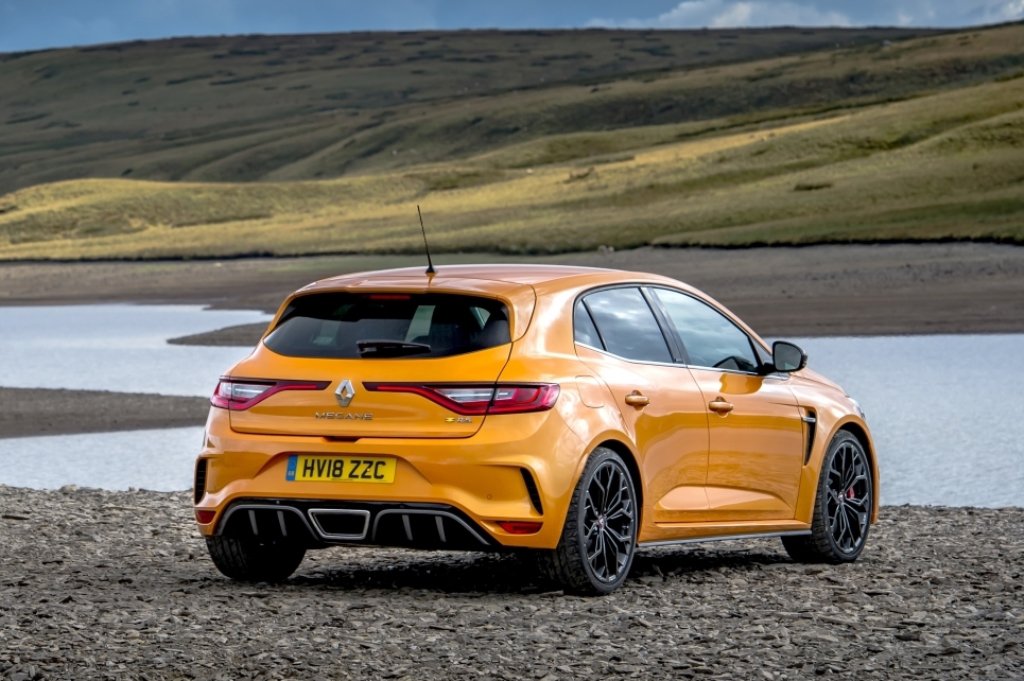 There’s a new air intake in the front bumper, a 3D honeycomb mesh in the grille, air extractors in the front wheel arches and the rear end gets a great looking diffuser and central exhaust outlet. Renault’s design boss, Laurens van den Acker, is one of the industry’s great talents and this is a terrific looking car from his styling studio – arguably the most visually striking hot hatch of all.

The new RS benefits from the regular Mégane's flair-filled interior, its stylish dashboard dominated by an oversized portrait-orientated touchscreen infotainment display. There are enough individual touches to remind you that you're sitting in something a little more feral than a normal family car, though. 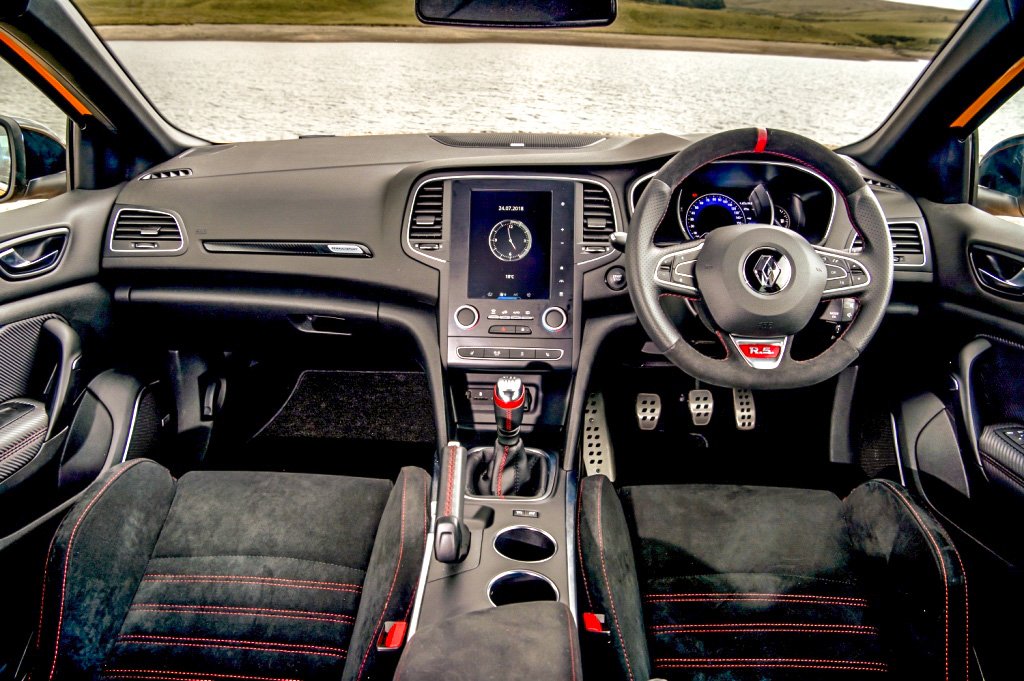 Once you've settled into the deeply contoured driving seats, you'll spot that the steering wheel is wrapped with Alcantara suede for both extra grip and a sense of sportiness. The dials are laid out in the same way as any other Mégane, but wear Renault Sport markings and every other control is carried over from the regular hatchback.

While now a four-door, access for rear passengers is if course easier but the extra depth of the (excellent) front seats detracts from rear legroom. Normal grown-ups won’t be too put out but those blessed with a little more height than the rest of us won’t want to spend too many miles back there. 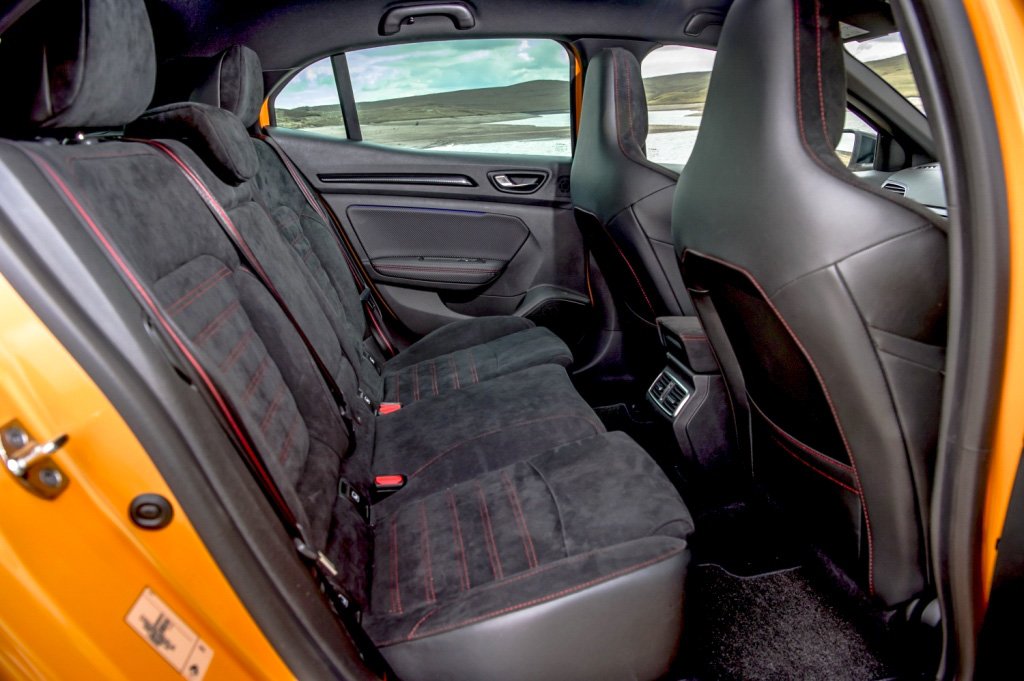 On the plus side, headroom is quite good wherever you sit and the square-backed Mégane has a fairly upright rear end that allows for a relatively constant roofline rather than plunging downwards like some rivals.

Its aggressive demeanour hasn't robbed the Mégane RS of boot space, which remains at 384 / 1,247 litres. That's a bit more than you'll find in the 380-litre Golf GTi and rather a lot more than the 316-litre Ford Focus RS offers.

The Mégane RS now uses a 1.8-litre engine instead of the former 2.0-litre unit. Offering 276hp and 390Nm of torque (from 2,400 to 4,800rpm), it’s the same turbocharged petrol engine as deployed in the Alpine A110 sports car. However, unlike that fiery two-seater, the Mégane weighs some 1,430kg which is heavier than the current Honda Civic Type R. Still, it delivers a respectable 0-62mph time of 5.8 seconds. 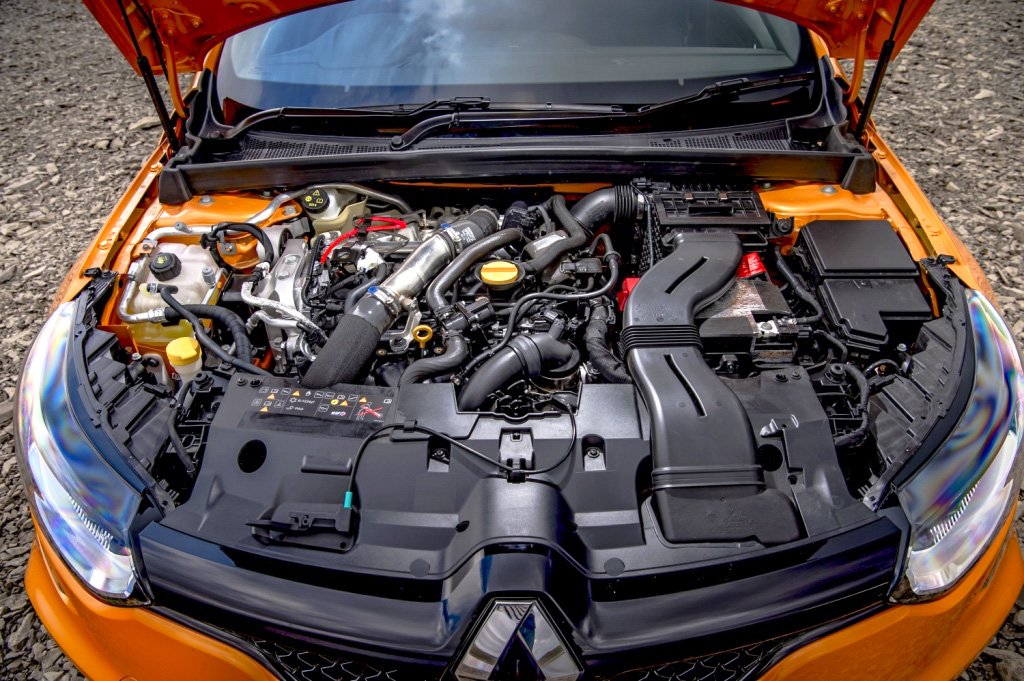 The optional six-speed EDC (electronic dual-clutch) automatic as tested felt a perfect pairing with the new 1.8 engine in the RS. The EDC has been considerably updated to withstand the 390Nm torque and was given new gear ratios and specific shift patterns. ‘Comfort’ and ‘Normal’ settings provide smooth gear changes for everyday driving around town. ‘Sport’ provides quicker gear changes and an amplified engine noise. ‘Race’ provides the quickest and most efficient gear changes with no compromise on comfort.

The EDC transmission also has Multi-Change Down and Launch Control. MCD drops several gears under braking by pressing and holding the left paddle. The best gear is then selected to exit the corner as efficiently as possible. Launch Control is available in Sport and Race modes when the clutch and turbo are preloaded, enabling an optimum standing start. When in Sport mode, traction control provides the driver with additional support. However, Race mode turns off the traction control and you’re pretty much left to your own devices. 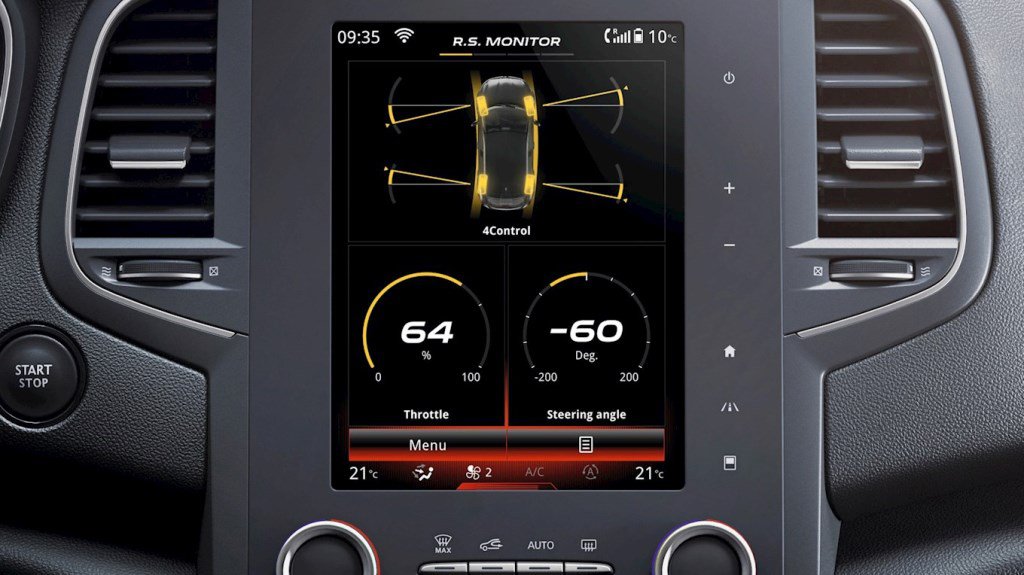 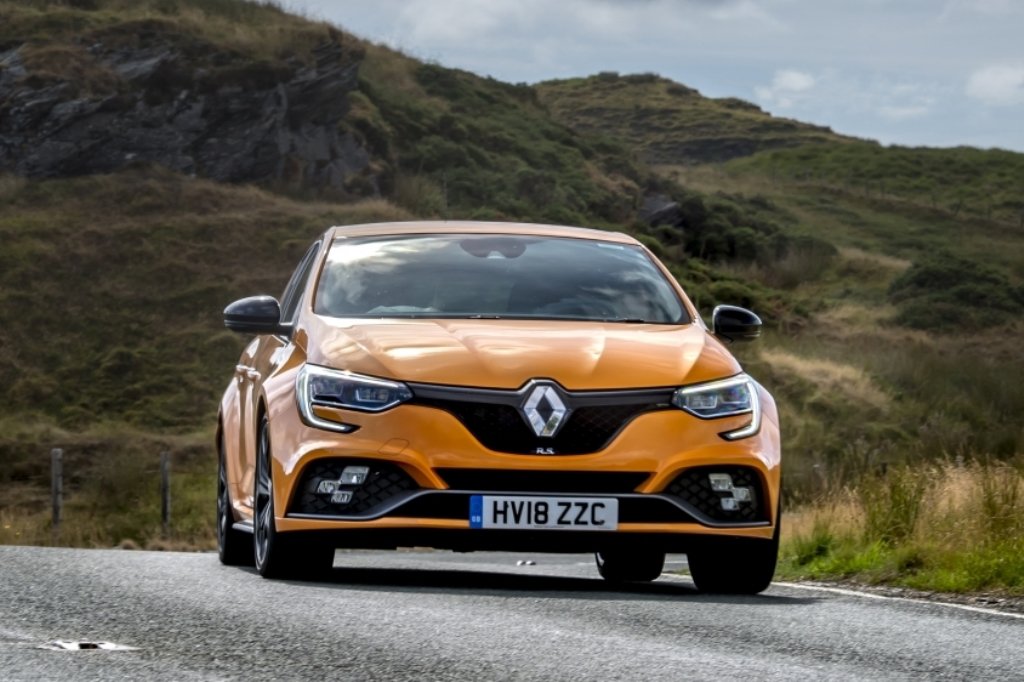 Two chassis are available giving the option of either a Sport or Cup chassis. The Sport chassis is for drivers who like a sporty, but still quite refined, drive. The Cup chassis has revised springs, dampers, anti-roll bars and bump stops and is 10 per cent stiffer. Its front and rear hydraulic compression stops provide a high level of chassis efficiency and its new Torsen mechanical limited-slip differential provides different lock-up values under acceleration and deceleration for enhanced traction and higher cornering speeds.

The Brembo braking system has been improved, offering drivers greater power, endurance and therefore confidence behind the wheel. The diameter of the front brake discs has been increased to 355mm and the brake pedal setting focuses more on the accuracy of the pressure applied, enabling drivers to remain in complete control, especially on track. 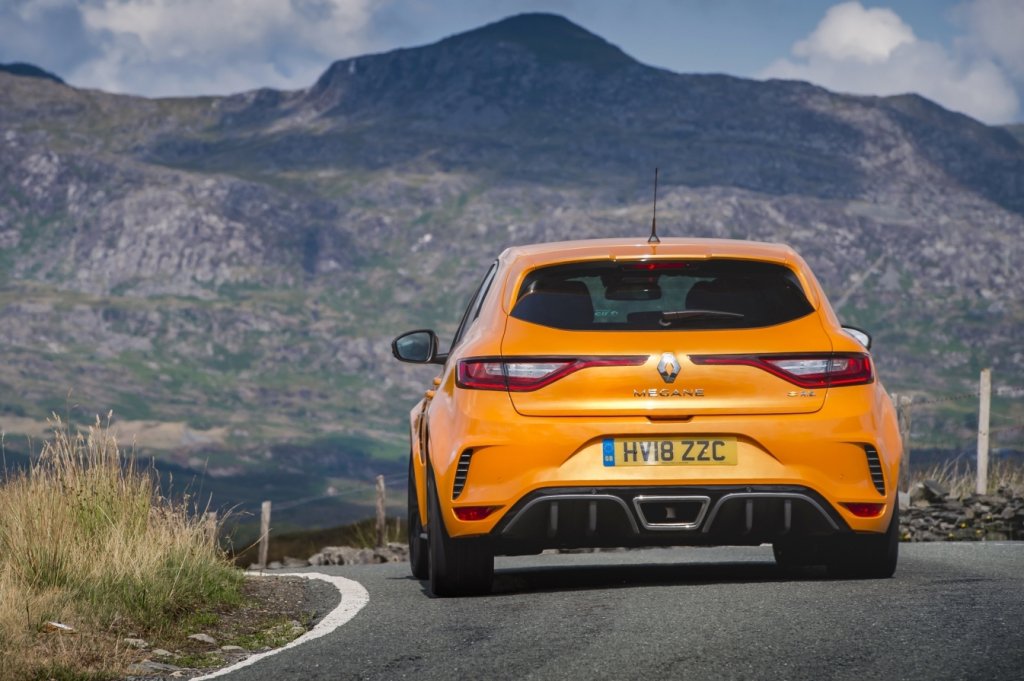 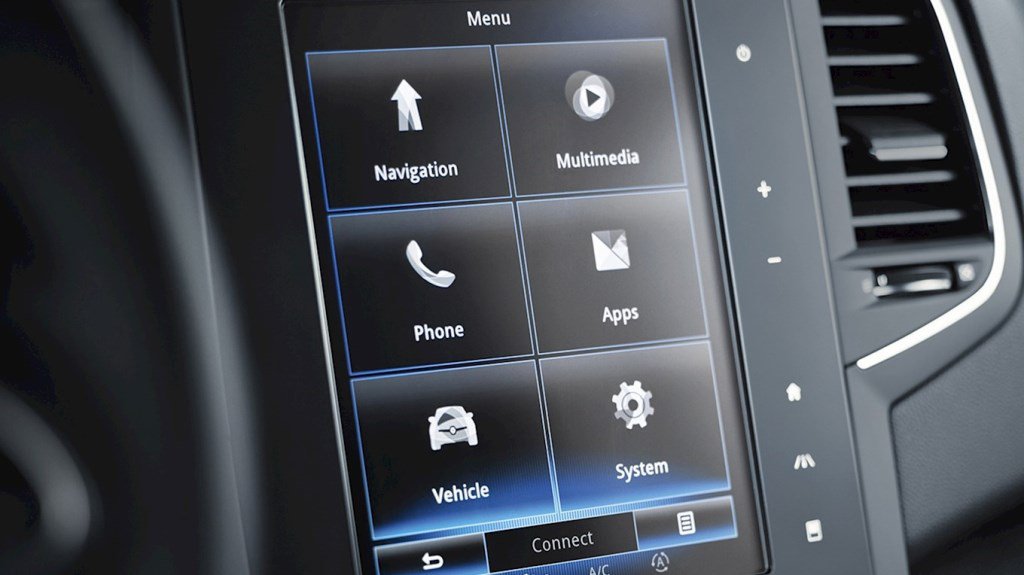 ‘RS Monitor’ has been taken from the previous Mégane RS and completely revised to be made more user-friendly. The RS Monitor gathers and summarises information from approximately 40 sensors around the car and displays real-time sensors via R-Link2 on acceleration, braking, wheel angle, 4Control, temperature, lap times and speed.

Building on RS Monitor, RS Monitor Expert provides all of this but it also allows drivers to film their sessions via smartphone and overlay telemetry data to create augmented reality videos. Data can then be uploaded to the Renault Sport website to analyse with other techno-geeks.

Renault prides itself on its safety credentials and the standard Mégane carries a 2015 five-star crash safety rating from Euro NCAP, scoring 88% for adult protection and 87% for the protection afforded to children. Pedestrians are catered for with an impressive 71% performance – the same score as was awarded to the Mégane's safety assistance systems. 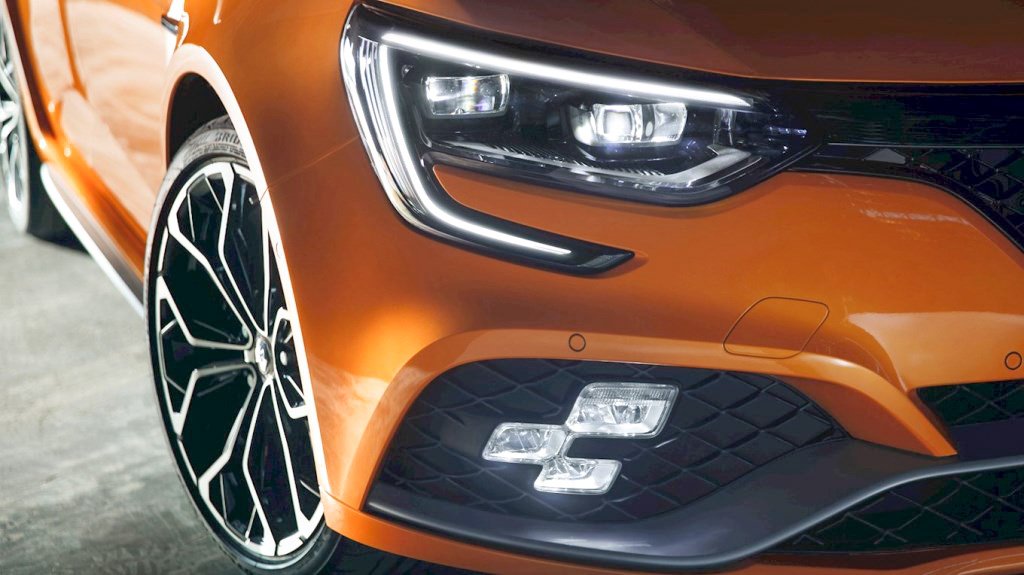 As mentioned above, many of these systems are optional, but automatic emergency braking, lane-departure and blind-spot warning are definitely worth paying extra for, as is the convenience of active cruise control.

The previous Mégane RS was so direct, tight as a drum and predictable. What you put into it is exactly what it gave back, so the new one has big shoes to fill. This new RS has lost little of the standard Mégane's underlying smoothness in its quest for sporty handling. 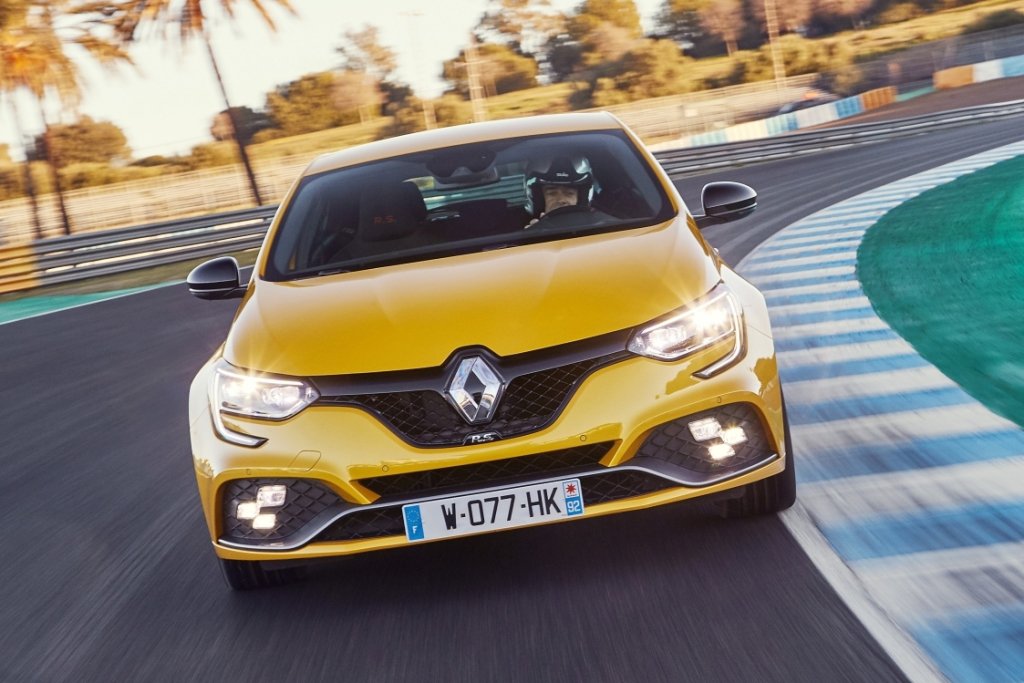 Beyond those great looks, the seats, the steering wheel and the raspy exhaust note are spot on for an RS. The steering itself is pleasant enough due largely to the front suspension's specific 'independent steering axis' steering knuckles, which move the steering axis 13mm closer to the hub face on each side to reduce torque and bump steer.

Sadly, Renault has employed a sound generator to infuse engine noise through the car's stereo speakers. Changing down through the gears quickly will trigger the requisite crackles, pops and bangs from the exhaust in simulated motorsport style. It sounds alright I suppose, but its authenticity takes some convincing. 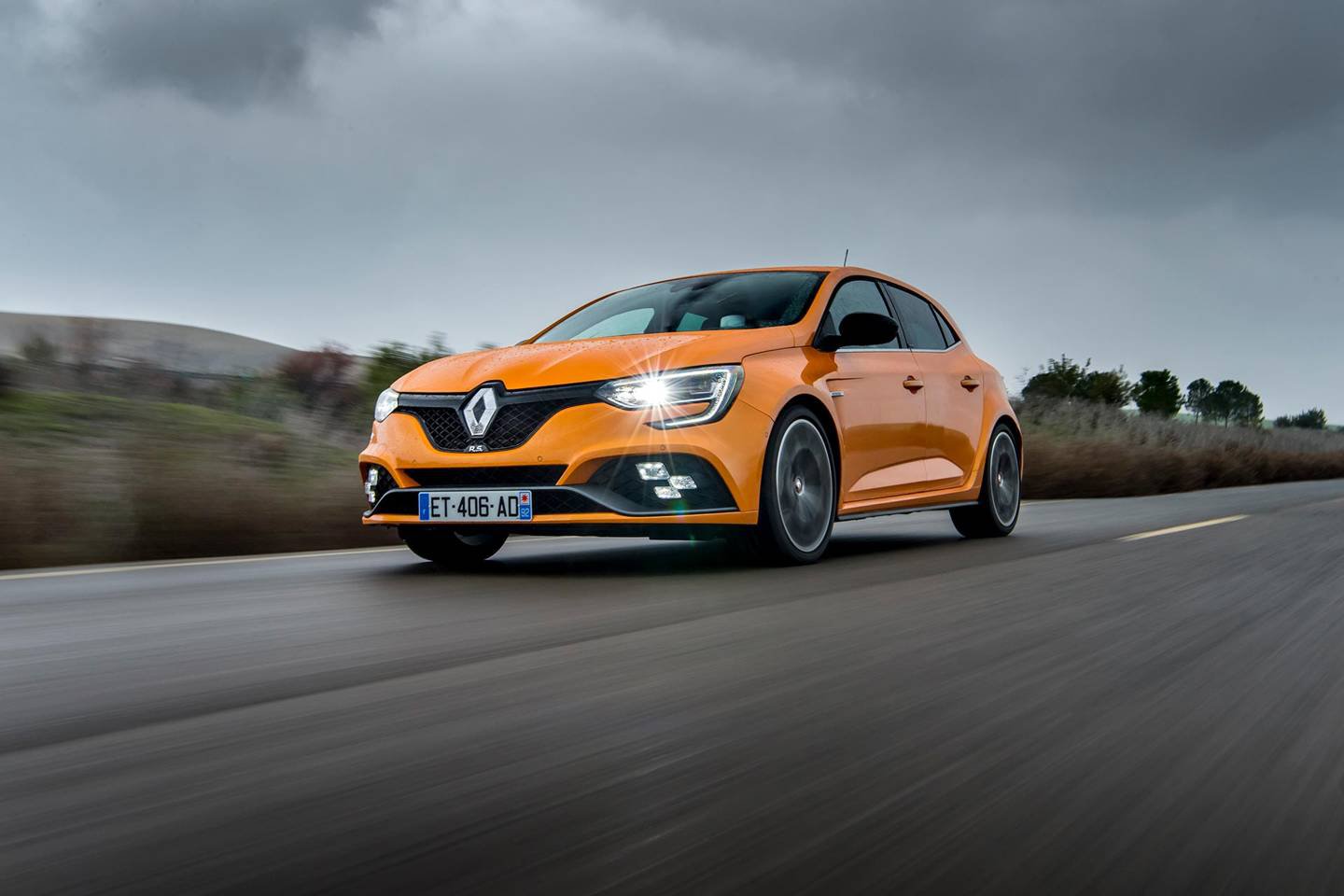 The ride is quite liveable which continues right through the spectrum of road conditions, with the thumping that some hot hatches suffer over big bumps mostly (but not entirely) absent. This is undoubtedly due to its hydraulic compression stop dampers, which effectively puts a dampening bump stop within each shock absorber to create second stage dampening instead of a sudden thud. It’s all rather clever and proof that you don't have to be harsh to be fast.

The new engine's smaller capacity makes itself known around town, with max torque not available until 2,400rpm. Most current turbos manage this sooner, but it's worth noting that the new engine does manage to deliver peak torque 600rpm earlier than the previous 2.0-litre. Once you're underway though, it feels every bit of its 276hp / 390Nm. 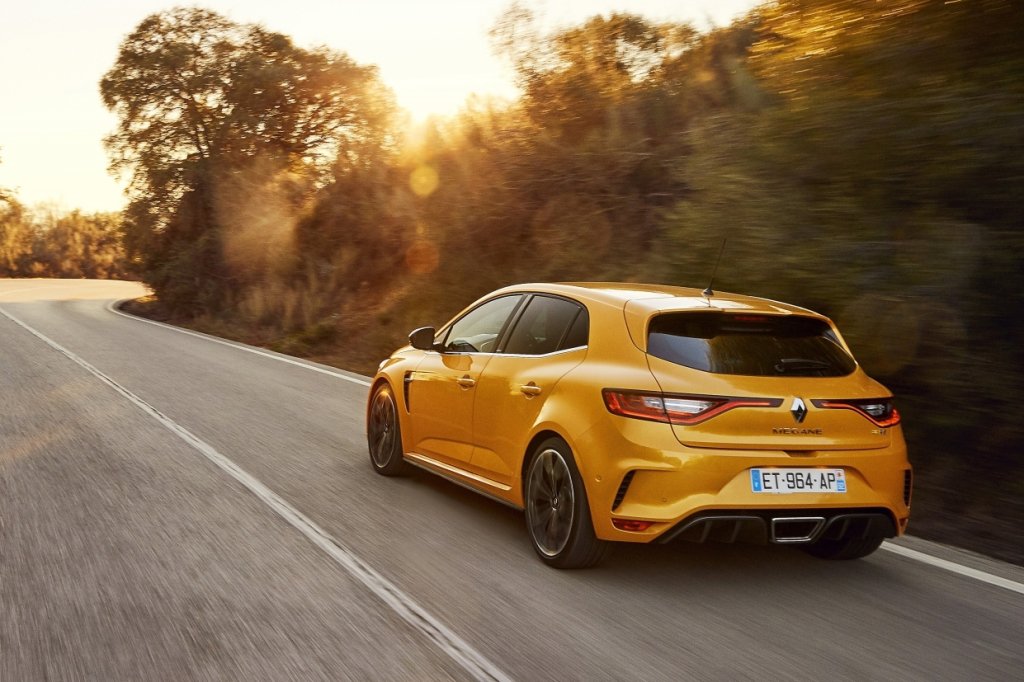 The 4Control all-wheel steering is largely undetectable under ‘normal’ driving conditions, but when you’re having fun it makes itself felt with mostly pros but there are a few cons along for the ride as well.

If you're heading through a brilliant series of corners of varying speeds (like those on the B3051 immediately north of Overton, Hampshire), it's noticeable how the all-wheel steering shifts between modes, particularly if it strikes mid corner. It can be quite disconcerting and I had to repeat the series of twisties – in both directions – several times, for research purposes, you understand. 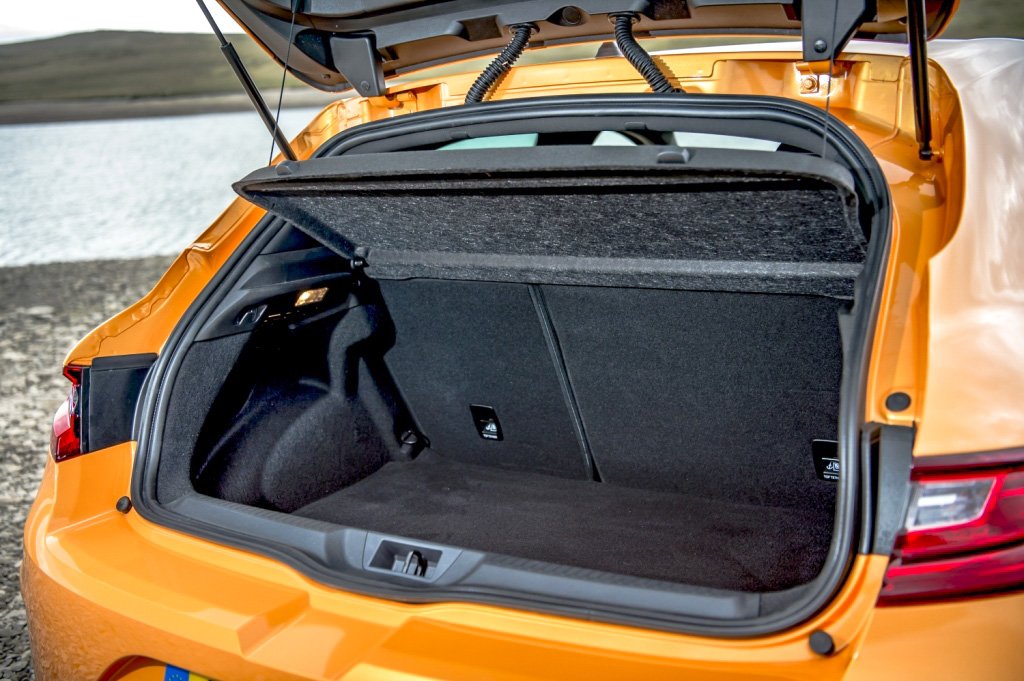 The new Mégane RS is objectively a better car overall. It isn't drastic or dangerous, but it adds another dimension to your judgement of corner speeds that may take some getting used to. You’ve pretty much got to trust the grip because there’s far more available than your manly bits would have you believe.

Overall, the new Mégane RS is fantastic, but it’s not without its faults and, at the risk of being publicly flogged, I prefer the EDC automatic over the manual. Given that the entry-level Mégane RS with Sport chassis now displays more maturity and is a little less naughty than its predecessor, you should configure your Mégane RS carefully. 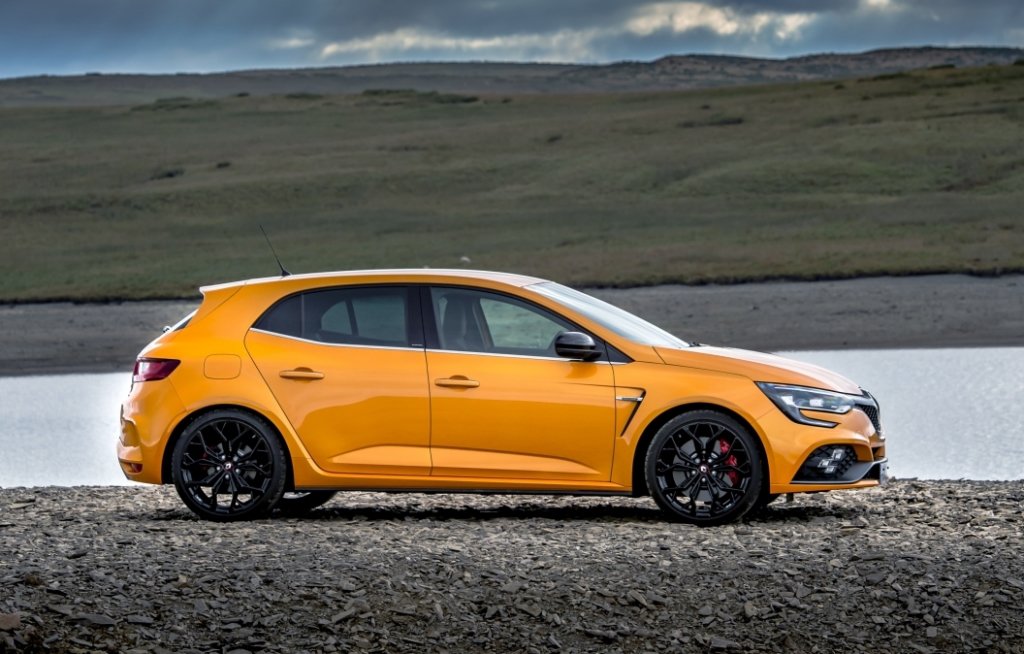 If you need a fast, sharp-handling hatchback that’s easy to live with as a daily driver, the base model Sport will do the trick – but so will its clutch of previously mentioned rivals.

But if outright performance and driving thrills are your main criteria for buying a Mégane RS, then you might want to spec it with the Cup chassis (which is only available with a six-speed manual transmission) or wait for the imminent arrival of the full-blown RS300 Trophy version.

The Renault Megane R.S. has a rich history and purists love this car...

The refined, grown up nature of the GTI TCR holds strong appeal in...