Now in its sixth-generation, the 2018 Ford Mustang gets a leaner face, revised suspension, improved safety equipment and a more powerful 5.0-litre V8. Now more suited to European tastes, Ford’s 50-year-old American icon is more rounded for wider appeal but remains as enthralling as ever.

Enhancements under the skin are more substantial than exterior changes. Ford has retuned the suspension and added a new optional 10-speed automatic transmission. The 2.3-litre turbocharged four-cylinder EcoBoost engine gains additional torque, while 5.0-litre V8 GT model as tested gets more power plus a re-engineered six-speed manual gearbox and a two-mode exhaust system. Magnetic dampers are now available with the Performance Pack, and a heated steering wheel and a suite of driver assistance features are available. 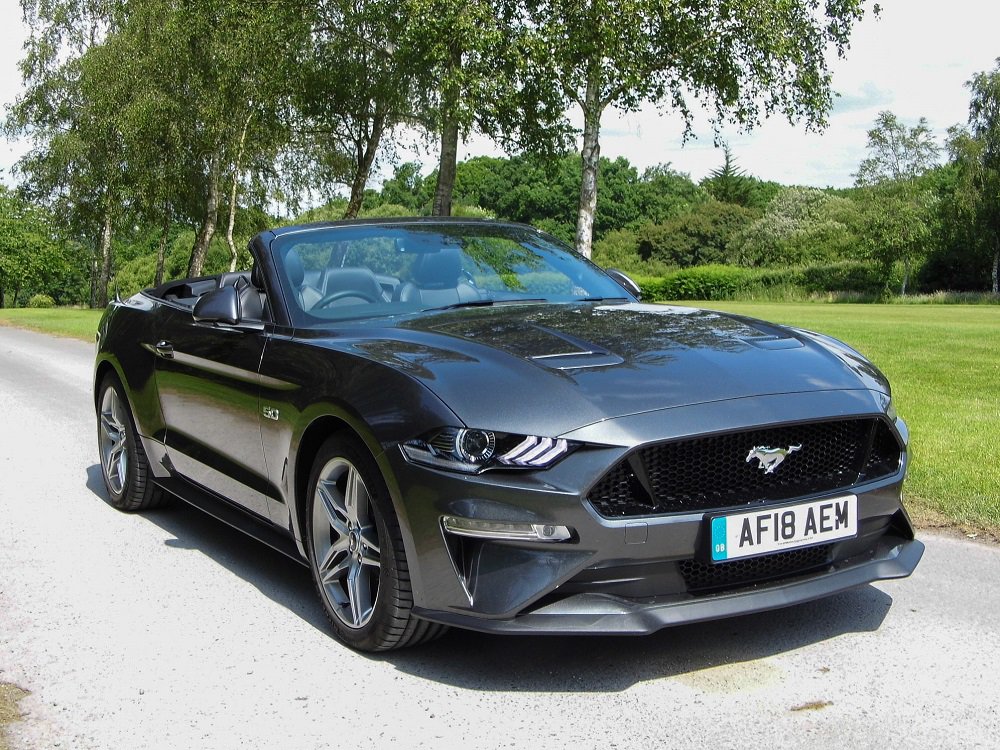 To fully appreciate the styling updates for 2018, you'd probably need the 2017 model parked alongside the new one. The new Mustang's bonnet loses the longitudinal ribs and power dome of last year's model for a lower, cleaner-looking one with a pair of tastefully executed extractor vents. The grille has a revised shape, as does the front fascia. But the biggest visual change is the move to more dramatic LED illumination for the headlights, daytime running lights, tail lights and fog lamps. The handsome 19-inch alloys fill the wheel arches nicely and are standard across the Mustang fastback and convertible range, irrespective of engine choice. 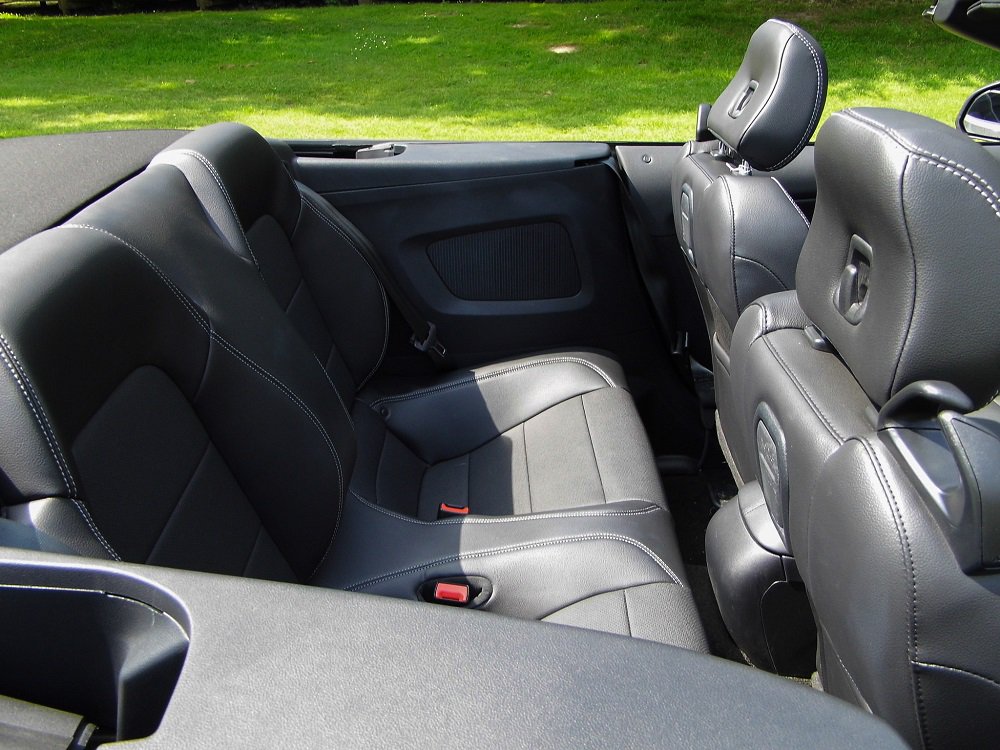 The 2018 Ford Mustang is a two-plus-two in name, but not in function. The back seats can house a pair of averaged-sized humans for short periods (particularly with the convertible’s roof down), but the rear furniture is almost vestigial. With a snug 332-litre boot and a lack of suitable storage places for one’s everyday stuff in the cabin, its practicality is somewhat compromised. 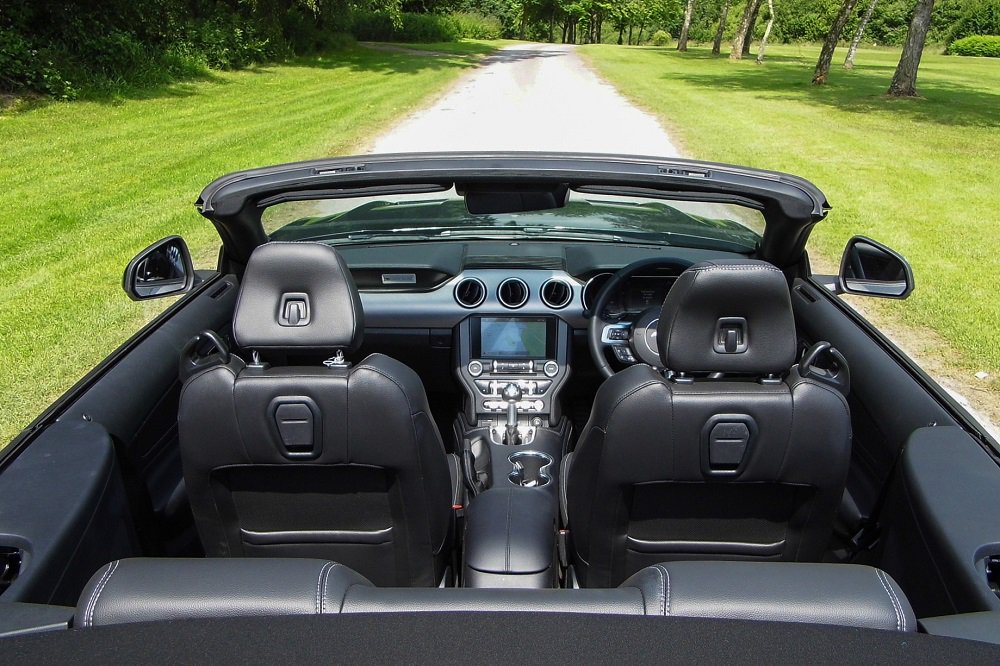 The front seats are comfortable and supportive either around town or when carving up a challenging B-road. The side bolsters have some give, so big-boned drivers won’t be too uncomfortable, but the Mustang’s sporting intentions are clear.

The dash is still a mixed bag. It’s charming, certainly, but the characterful design touches don’t hide the use of cheaper plastics and switches than you'll find in the more upmarket German competition. There may be squishy plastics and leather trimmings on the top of the dash and doors, but elsewhere there are cheap-feeling, brittle-sounding plastics that wouldn’t be out of place on a Dacia. More impressive is the standard 12.0in digital instrument cluster. The graphics are sharp and you can toggle between a variety of layouts that range from conventional-looking dials to simplified displays that show the rev counter as a horizontal bar with lights that flash when it’s time to change up. You can even mix and match between different displays and change the colour of the instruments.

Unfortunately, this does highlight the more basic-looking Sync-3 infotainment system. This 8.0in touchscreen has big icons and is reasonably responsive. Better news is that Apple CarPlay and Android Auto smartphone mirroring is standard, although you have to pay extra for navigation on all models. The Ford Mustang GT has a belting engine in the 5.0-litre V8, full of brawn, torquey from idle to redline, and possessed of a thunderous soundtrack. It really is the making of the Mustang.

There are various driving modes that you can toggle through, including ever-more ferocious and bonkers settings that allow you to do huge burnouts and big drifts on track, or that just bring heavier throttle and steering for sporty road stuff and lighter again for easy about town showing off. 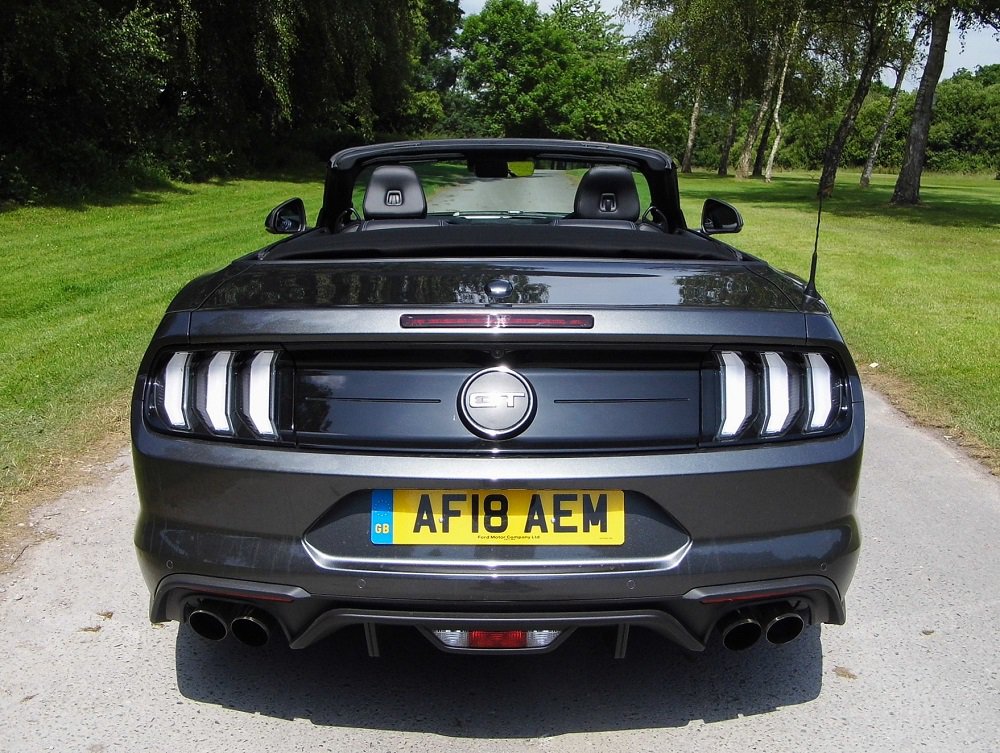 The optional 10-speed automatic 'box in the test car was a bit dim-witted and prone to hunter-gatherer tendencies when left to its own devices. Fortunately, the steering wheel-mounted flappies allow you to take full control when you want to. Instead of feeling like the manual’s poor cousin, it’s just as recommendable and even improves fuel economy of the V8.

You can also vary most of the control weights (and auto gearbox and adaptive dampers if you've ticked those option boxes) independently and save it to your personal favourite setup, but we reckon you’re best of sticking it in Sport+ and just enjoy it for what it is – a whole lot of fun.

During the test week, I drove 287 miles over mixed roads and achieved just 19.8mpg, which isn’t too far removed from the official 22.5mpg. For sure, it’s better than the 2017 model but not by much. In keeping with the brawny image, the Mustang's electric steering requires a bit more muscle and is a tad slow. You can vary its weight using various drive modes, but steering always feels heavier than European rivals'.

For a car that weighs a little under 1,800kg, the Mustang has lots of front-end bite and does a reasonably good job of telegraphing what the front tyres are doing through the steering wheel. While you can get the front end slipping wide if you enter a corner too quickly, there’s more chance of the rear sliding if you’re too generous with power on corner exit.

With the optional (and recommended) MagneRide adjustable suspension, the Mustang controls body movements well as you brake, turn and accelerate. The Mustang rides reasonably well for a car of this type – particularly if you leave the dampers in ‘Normal’ mode. However, on our badly surfaced UK roads, it always feels a bit lively, and potholes and other large road irregularities can thump through into the interior. The standard non-adjustable suspension isn’t quite as impressive, but it still strikes a reasonable balance between ride comfort and body control. The 5.0-litre V8 feels mighty, but you have to be prepared to work it far harder before it feels its full 444bhp. It makes a gloriously thunderous noise and has the brutal performance appropriate for a car with this kind of road gravitas.

There is a bit more wind and road noise than in most rivals, but engine noise does fade into the background at higher speeds, mostly thanks to a long top gear, which will also keep revs right down (on the V8, at least) when you’re on a motorway cruise.

The convertible definitely has a bit of body flex and wobble going on that erodes that cornering keenness but it’s still hugely entertaining and lovable through and through. To be sure, the Ford Mustang is an emotional slice of automotive Americana – the kind of car that draws in your heart, rather than your head. It’s not at all efficient, nor is it the most precise-handling, or the classiest and the scuttleshake will likely dislodge your hardiest titfer, as it did mine.

But, it’s easy to love and readily turns heads everywhere it goes. It’s loud, throbby, looks marvelous and is satisfyingly fun to drive. It's miles away from being perfect and not remotely as refined as anything from the Germanic Trio, but if you're a Mustang kind of person, you really won't care.