2018 Ford Focus Review: Back where the thicker cream floats

It’s difficult to comprehend that the Ford Focus has been trundling the length and breadth of British roads for just over 20 years.

Year after year, the Focus has lodged itself in the sales charts up where the thicker cream floats, fighting for top honours alongside traditional rivals such as the Volkswagen Golf and the Vauxhall Astra. A major factor that set the Ford Focus apart from those cars was just how good it was to drive. This all-new, fourth-generation Focus builds on that success by offering much lower price tags than the outgoing model and comes with more cabin space, is safer and packed with the latest technology. And the drive? Yes, even that’s better, too.

I recently spent an enjoyable week with the new Ford Focus, delivered in ‘ST-Line X’ trim, fitted with the 1.5 TDCi EcoBlue diesel and paired with an eight-speed automatic gearbox. Pop the kettle on and crack open the Hobnobs…

The new Ford Focus is very much an evolution of previous iterations. The car is wider and lower, with a longer wheelbase and shorter overhangs, yet maintains roughly the same exterior dimensions. 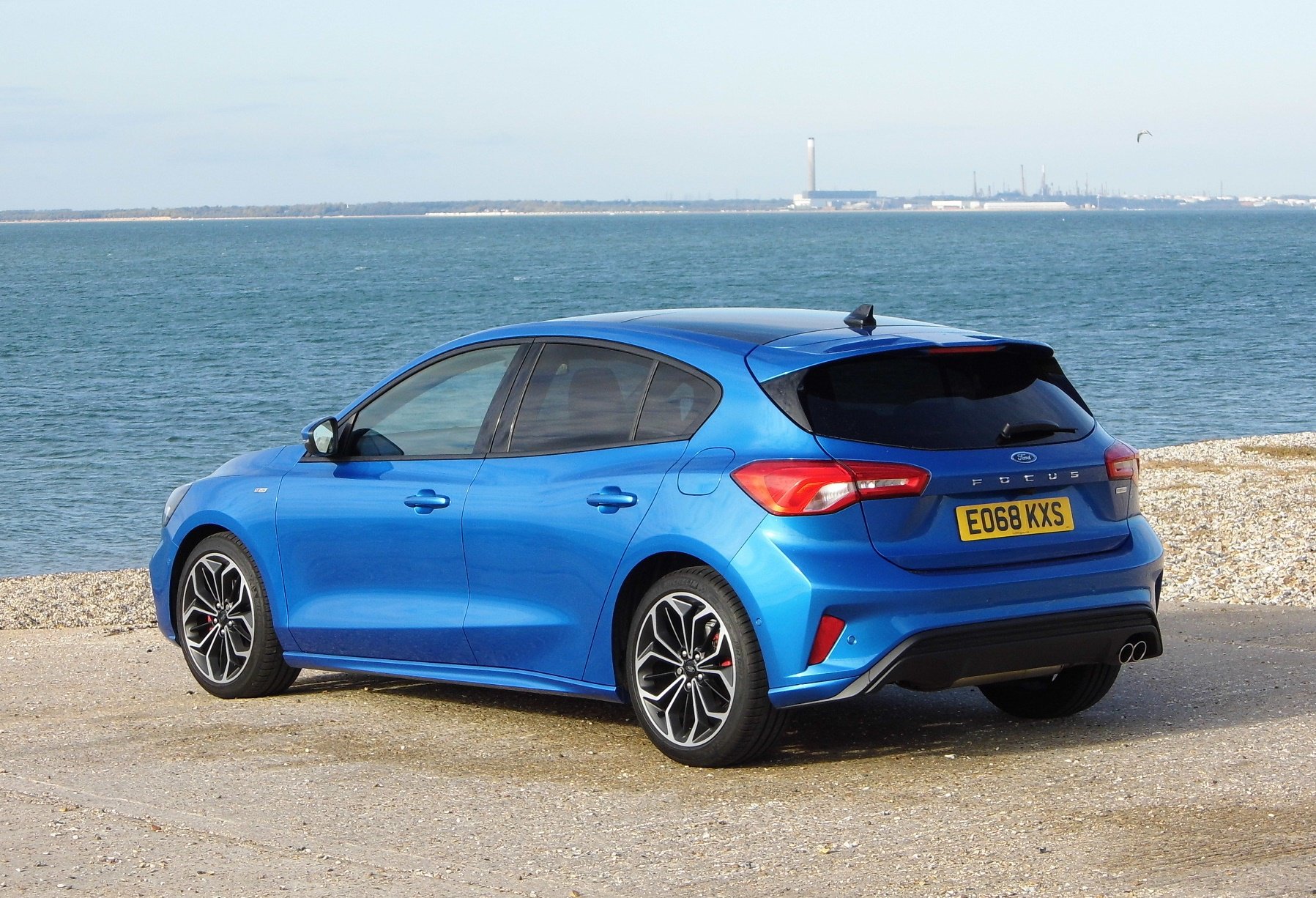 As with all new cars, the new Focus started its journey on a clean sheet of paper. Everything about the outgoing model was revisited. It rides on Ford’s new C2 platform and was, from day one of its development, focused firmly on European buyers (the car has never sold well in the States).

While the exterior dimensions of the new Focus have remained pretty much unchanged, it’s due to some particularly clever design that the interior is where the car has noticeably grown to offer much more space. From the higher quality materials to the fit and finish, the new interior is a pleasing place to be. There is now a mature refinement that belies its mass-market family hatch appeal.

The redesigned dashboard is 100mm closer to the base of the windscreen freeing up space for the front occupants, while the 50mm longer wheelbase courtesy of the new chassis has resulted in more knee, leg and shoulder room in the back. 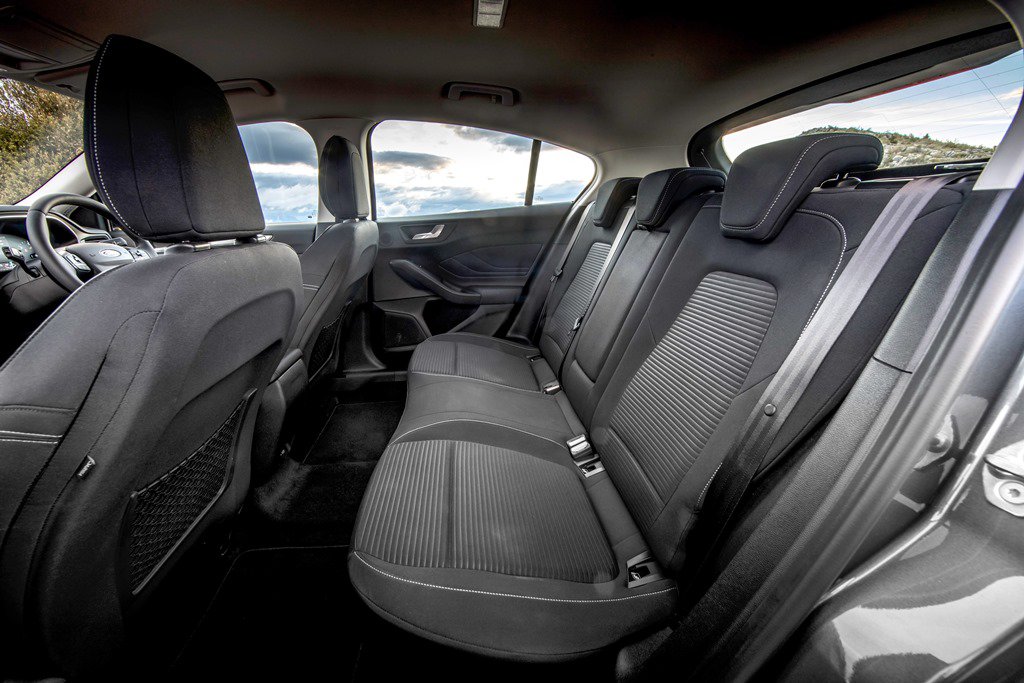 From the driver’s seat, all the important controls are positioned logically around the steering wheel and centre console, while the 6.5-inch touchscreen (an 8.0-inch upgrade is available) extends from the dashboard to display navigation, media and other infotainment options via Ford’s rather good Sync3 interface.

The manual handbrake has been replaced by an electronic unit and the traditional gearstick on the automatic as tested has also met its demise to be replaced by a Jaguar-like rotary dial gear selector. 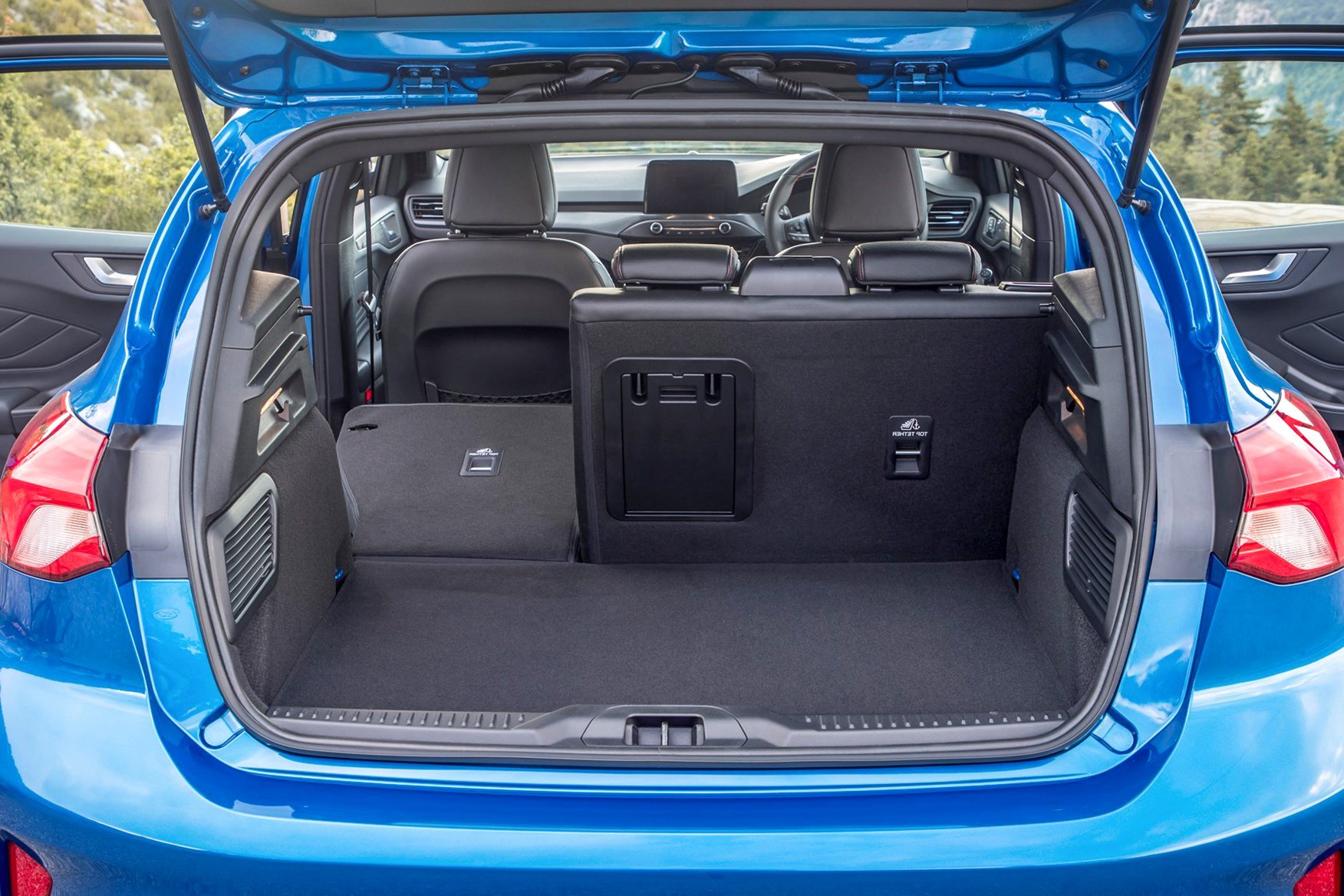 With the rear seatbacks in place, the new Focus beats the VW Golf for boot space with a purposely shaped 375-litre capacity, which rises to 1,354 litres when folded flat.

Ford’s familiar trim levels including the popular Zetec and Titanium continue on the new Focus and are joined by a new, top-of-the-range luxury Vignale model. Zetec models come with a larger 6.5-inch screen that sits atop the car’s dash, and also adds voice recognition technology, Apple CarPlay and Android Auto. The touchscreen is responsive and bright, but the onscreen graphics aren’t quite as sharp as some rivals, notably the Golf. 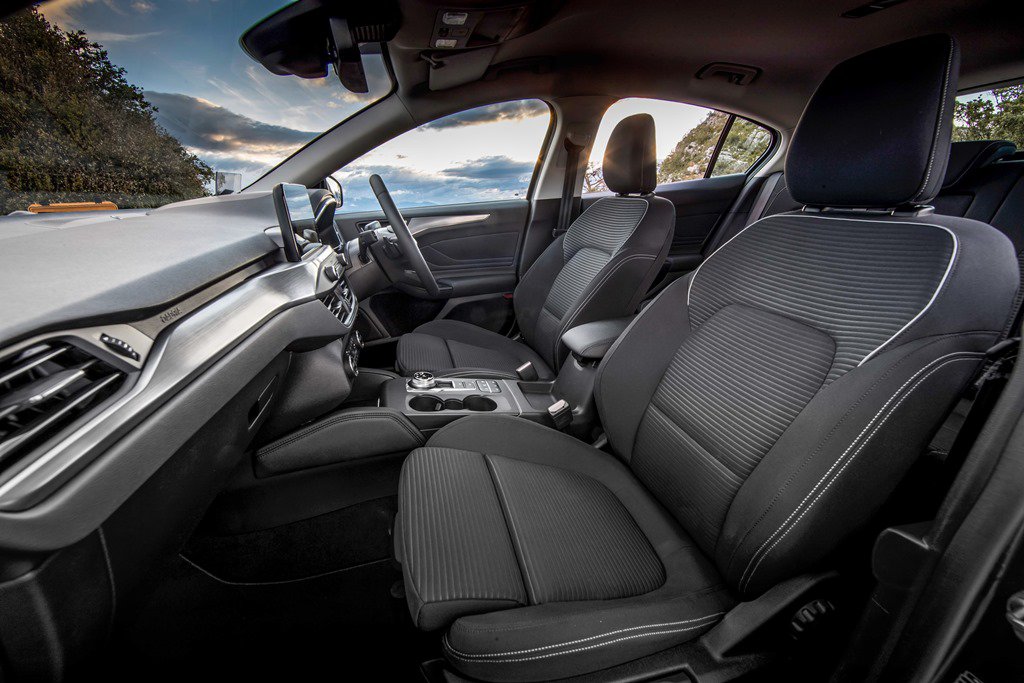 From the ST-Line X model as tested, all the way to the range-topping Vignale, the screen size increases to 8.0-inches and navigation in standard. Also added from ST-Line X is a 4.3-inch colour instrument cluster screen for clearer driving information on the move. A wireless smartphone charging pad can be added to all but entry-level models.

Engine choices on the new Focus are again well catered for, with a total of eight configurations on offer – but at launch, none are hybrid.

The good news is that all petrol engines are hybrid compatible, so we can expect them to arrive sometime in 2019. 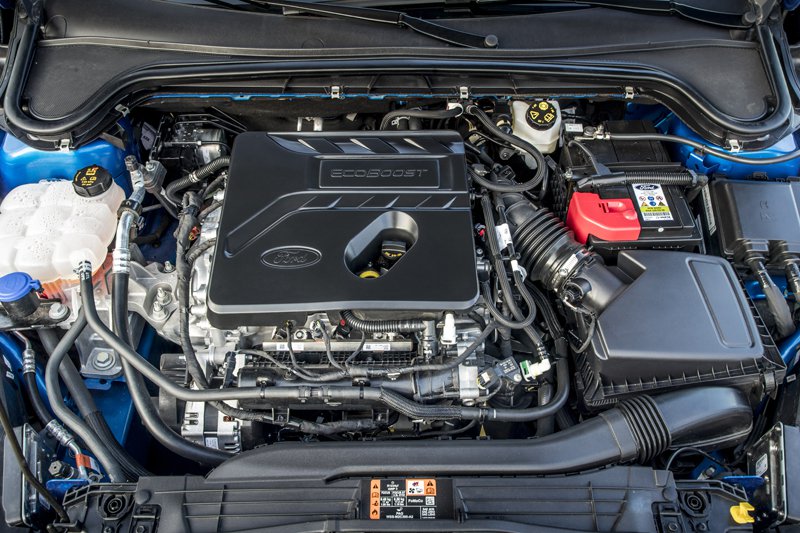 The pick of the EcoBoost turbocharged petrols would be the 125hp 1.0-litre triple as tested. It’s much stronger and peppier than its numbers suggest and will be less expensive to own and run.

If it’s a diesel you’re after because you constantly slog up and down the motorway, then the 120hp 1.5-litre engine (as tested) will have all the punch you need while comfortably achieving in excess of 60mpg.

Both transmissions – the six-speed manual and eight-speed automatic gearbox – are new, with the latter replacing the ageing PowerShift six-speed unit from previous iterations of the Focus. 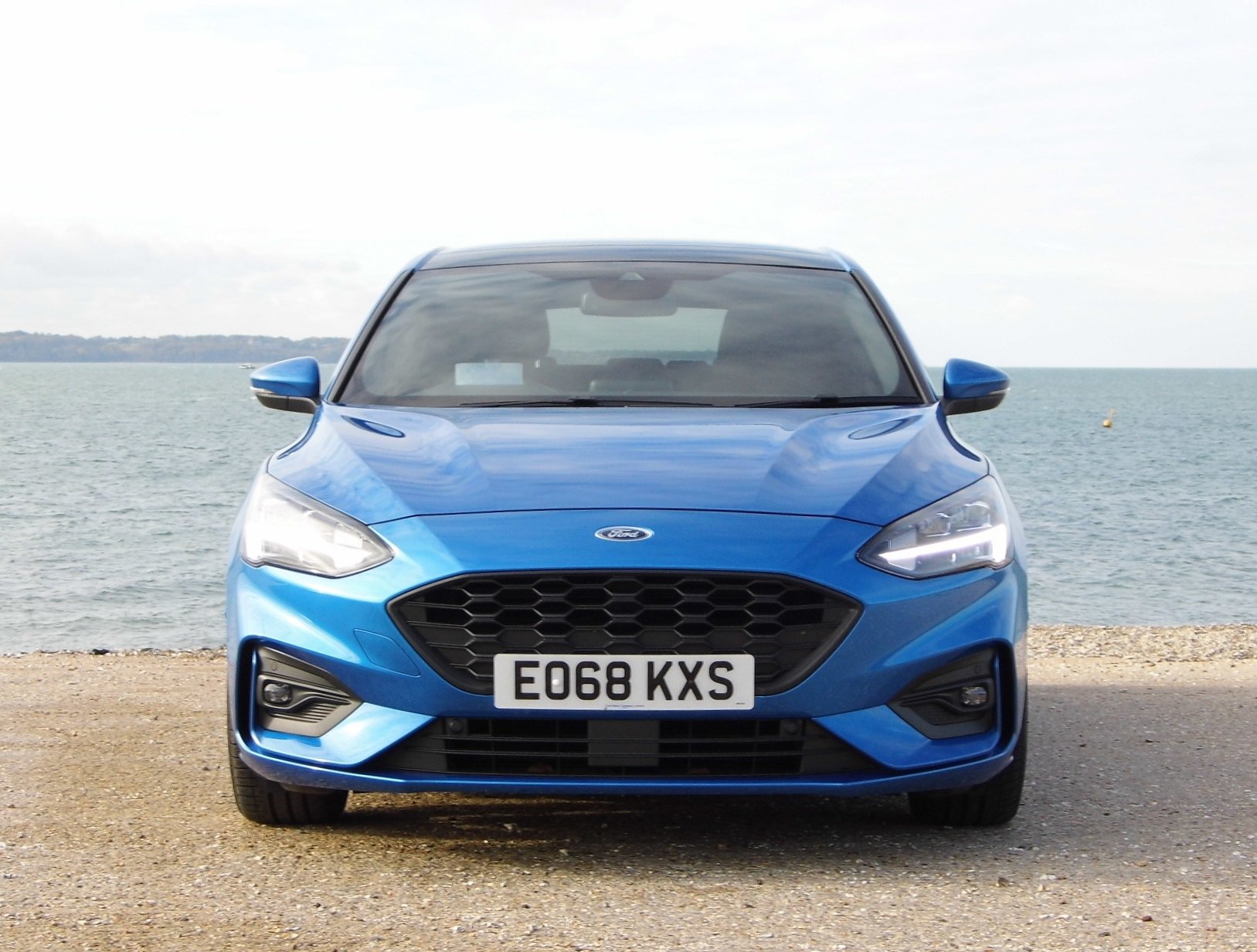 Like most automatics, the new eight-cog unit is perfectly good at driving around in a calm, sensible manner, with smooth changes and decent driveability. However, should you need to push on, the changes can be jerky and hesitant, not to mention a rather irritating delay when you least expect it. Even with the gentlest of applied throttle, it’s quite bullish pulling off the line, too, which may take a bit of getting used to. 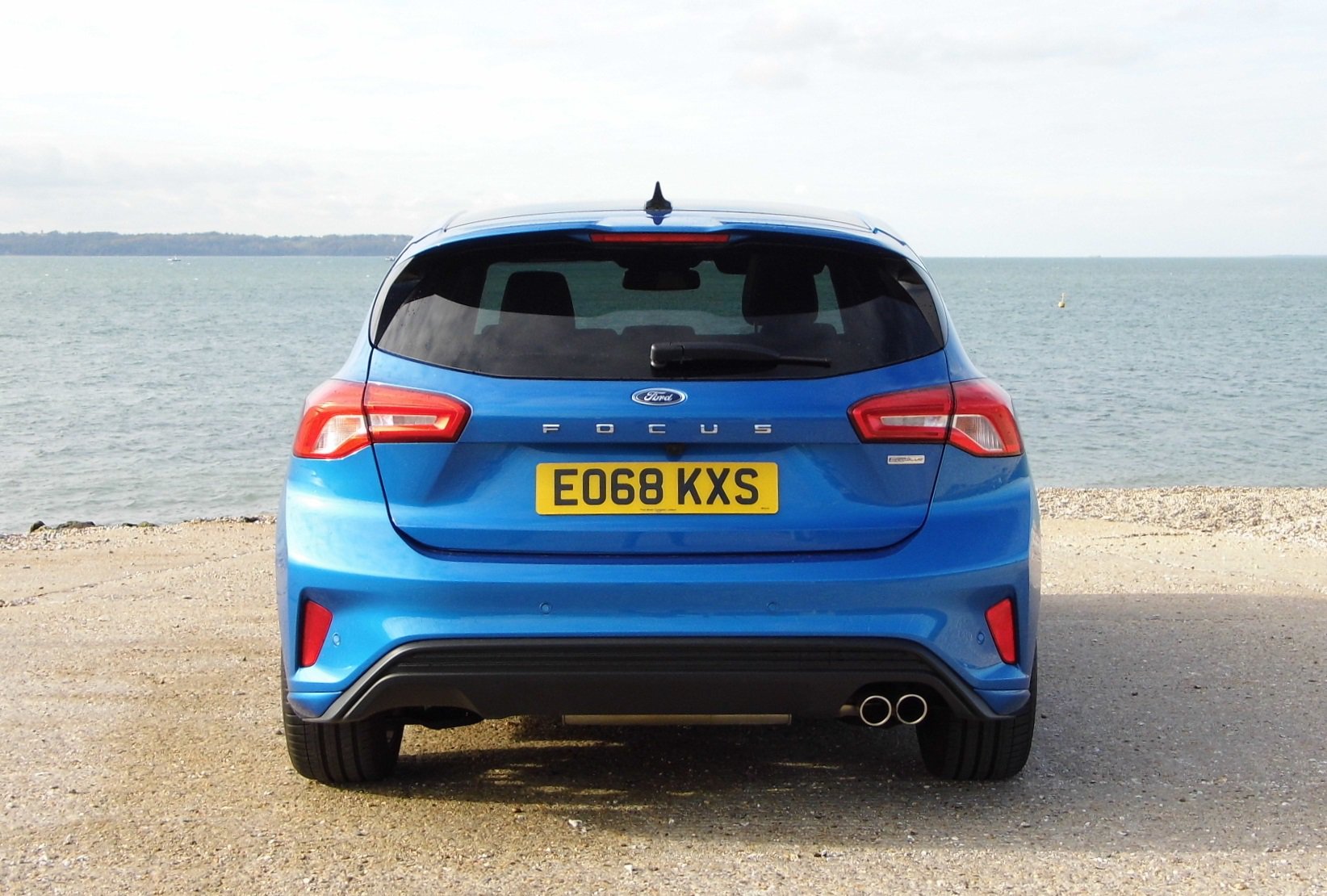 Less expensive than the automatic, the six-cog manual ‘box is one of the most driver-centric manual transmissions available anywhere, with a smooth, well-weighted shift action that is thoroughly enjoyable and easy to use.

Superb handling is what the Ford Focus has always been about and Ford’s mechanical elves have enabled this new one to handle even better.

Again, thanks to the new C2 chassis, there is a wonderful balance between composure and stiffness. That, coupled with the car’s exceptional grip levels mean that the car is unlikely to misbehave even over the meanest of British roads. The steering is nicely weighted and is welcomingly sharp and accurate. Like most electronic steering setups these days, there is little feel as to what’s really going on down below. That said, the car’s body control is great and the car remains composed at all times through the corners.

The new Ford Focus achieved a full five-star safety rating from Euro NCAP when crash-tested in July this year and comes with plenty of active safety aids. In addition, all models come with a Thatcham Research category one alarm and immobiliser that mean it’s good at resisting being broken into or stolen.

The 2018 Focus suggests that Ford is back to its very best covering as it does, all the requirements of the family hatchback buyer: comfort, space, practicality, safety and good kit levels.

That it has again probably become the best driver’s cars in its class is a continuing bonus. It no longer lacks that clinical degree of Germanic finesse and quality you’ll find in the Volkswagen Golf and, as an overall package it’s difficult to find any fault at all, to be honest.