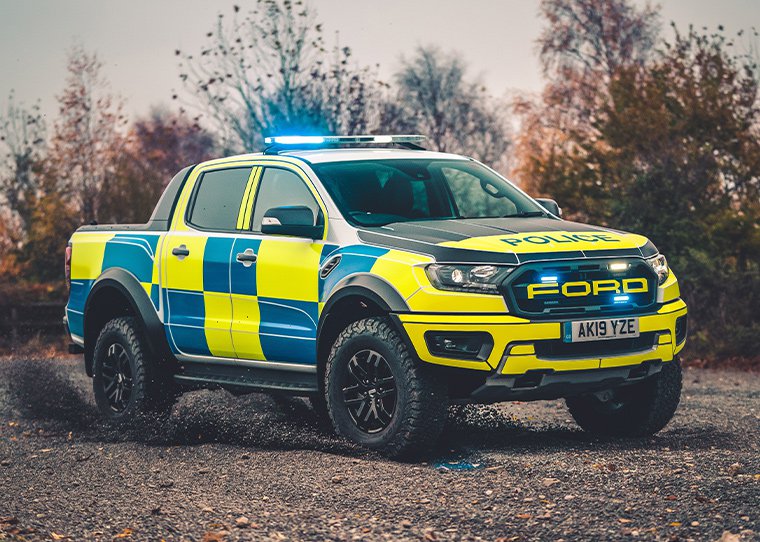 It’s Blue’s, Two’s, greens and browns for the Ford Ranger Raptor as it undergoes trials by Welsh police forces. A modified version of Ford’s bullish Ranger Raptor pick-up is being trialled by South Wales Police. While the Raptor’s 105mph top speed is unlikely to trouble too many baddies, Ford claims the car has ‘more than enough’ to keep up with law-breakers ‘making a getaway across gravel, mud and sand’. We recently road-tested the Ranger Raptor here at Leasing Options and concluded that the attitude-soaked pickup indeed offers something unique for the police to warrant its consideration. It's a brutish and rugged take on the UK's most popular load-lugger but with the emphasis on effective off-road ability rather than outright speed on it.

For now, the South Wales police force is the only one trialling the Raptor, however, a Ford spokesman said that several ‘covert teams’ have enquired about the vehicle and it expects more interest in the future.

Wales is perhaps the perfect proving ground for the Raptor, being one of the UK’s most rural areas. The police Raptors could very well see action sliding across fields and dodging sheep in pursuit of criminals. Meanwhile, the Ford Focus ST estate will be tested by a Cumbrian police force. With a top speed of 155mph, Ford hopes the estate will help the police capture criminals on the roads. The cars are produced by Ford’s Special Vehicle Preparation team, with the full assortment of police hardware and software add-ons.

Nissan has unveiled the newly-updated version of its toughest Navara...

With a heritage spanning some forty years, the heavily-revised L200...