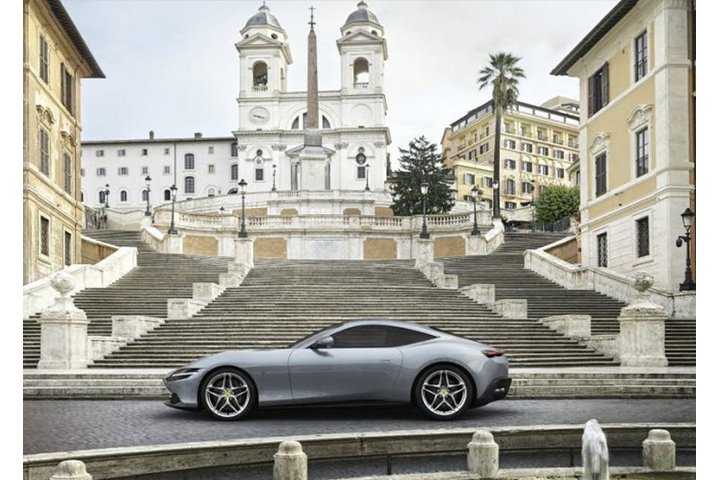 Ferrari has revealed the Ferrari Roma, an all-new model that slots in between the Ferrari Portofino and the Ferrari F8 Tributo in the brand’s line-up. Revealed at a dedicated client event held in Italy's iconic capital, the Roma’s styling and interior design represent a departure from those of existing models, suggesting a new curvaceous design direction for future Ferrari models. First deliveries are scheduled for summer 2020, and the price is likely to be around £190,000 before options.

Rumours ahead of the car’s unveiling suggested Ferrari were set to unveil a coupe version of the Portofino, but instead revealed a completely new model. With an incredibly long bonnet, short tail and curvy lines, it’s inspired by Ferraris made in the 1950s and ‘60s - notably the 250 GT Berlinetta Lusso and 250 GT 2+2. Its profile also shares an uncanny resemblance to the Maserati Alfieri Concept from 2014. It won’t be the first time such a plan has been hatched, as the Ferrari California was originally planned as a Maserati.

The Roma uses slim LED lights at the front and rear, while the ‘shark nose’ front end also features a body-coloured grille and a pointy chin spoiler. At the rear, there’s a hidden active spoiler below the windscreen, which can switch between three set positions.

Coming in at the lower end of the firm’s supercar range, the Ferrari Roma will be a rival to cars like the Aston Martin Vantage, Audi R8 and Mercedes-AMG GT. The interior is styled like no other Ferrari, and it’s clear that the firm is moving away from its current layout. The Roma gets an 8.4-inch portrait infotainment system on the centre console that allows access the navigation, audio and climate control functions.

The two front seats are separated by a sweep of trim that seamlessly joins the dashboard. There’s a new, hi-res screen in front of the passenger that can display performance stats and audio information, while the multifunction steering wheel and 16-inch digital instrument cluster are both borrowed from the Ferrari SF90 Stradale, which is the most powerful model in the range.

Under that swooping bonnet is a 3.9-litre V8 engine which, with the help of a turbo, produces 612hp. It’s rear-wheel drive only, and an eight-speed twin-clutch gearbox lifted from the SF90 plug-in hybrid is fitted as standard. Zero-to-62mph takes just 3.4 seconds, and the top speed is said to be over 200mph. Unlike the Vantage, we don’t expect the Ferrari Roma to be offered with a manual gearbox. The Roma sits on a new modular platform, which will be used for all next-generation Ferrari models. In fact, 70% of the Roma’s parts are new, including the exhaust system that has bypass valves but goes without silencers. Ferrari’s latest model is also the first of the company’s ‘grand tourers’ to feature its ‘Slip Slide Control 6.0’ traction control system.

Clever torque vectoring (allowing varying amounts of power to be sent to each wheel) is included, and the Roma also gets the steering wheel-mounted Manettino switch that lets you choose between wet, comfort, sport and race driving modes.