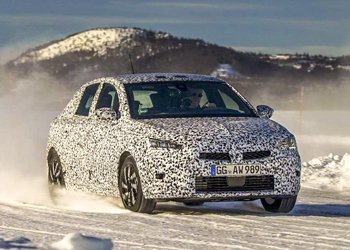 We cherry-pick a selection of bite-sized automotive news from the past seven days. This week, there’s news from Jato Dynamics, Abarth, Land Rover, Vauxhall, Audi and Peugeot. 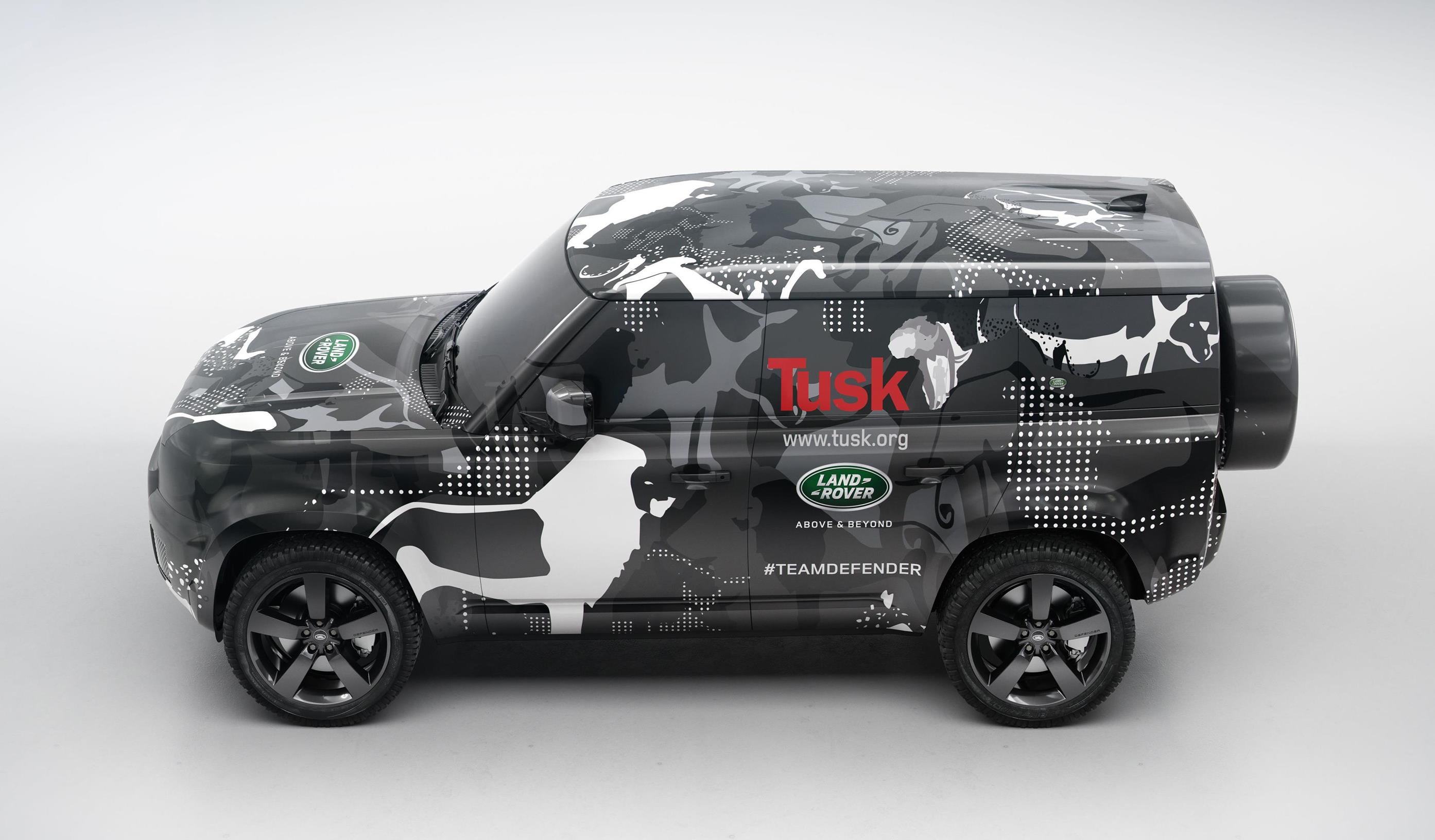 World Land Rover Day is celebrated on 30 April every year to mark the world premiere of the original Land Rover at the Amsterdam Motor Show on this day in 1948. In celebration, Land Rover has announced plans for the new Defender to complete a final phase of field testing with the Tusk Trust, on location in Kenya.

A Defender prototype wearing unique camouflage will experience real-life testing at the Borana Conservancy as part of Land Rover’s 15-year partnership with Trust. The prototype will tow heavy loads, wade through rivers and carry supplies across unforgiving terrain in a series of real-world trials at the 14,000-hectare reserve – all pretty much you’d expect of a Land Rover Defender.

By the time the new Defender makes its public debut later this year, it will have passed more than 45,000 individual tests in some of the most extreme environments on earth. Land Rover engineers have taken the test mules to the 50-degree heat of the desert, the sub 40-degree cold of the Arctic, as well as the 10,000ft altitude of the Rocky Mountains in Colorado to ensure the new Defender will take everyday life in its stride, for even its most adventurous customers.

The new Land Rover Defender (codenamed L851 and due in showrooms in 2020) brings the world-famous nameplate back from the brink of extinction. It is now certain that Land Rover will launch a Defender Sport model, along with other body styles. A battery electric version is in the works too, but it’s unlikely we’ll see that until 2024. 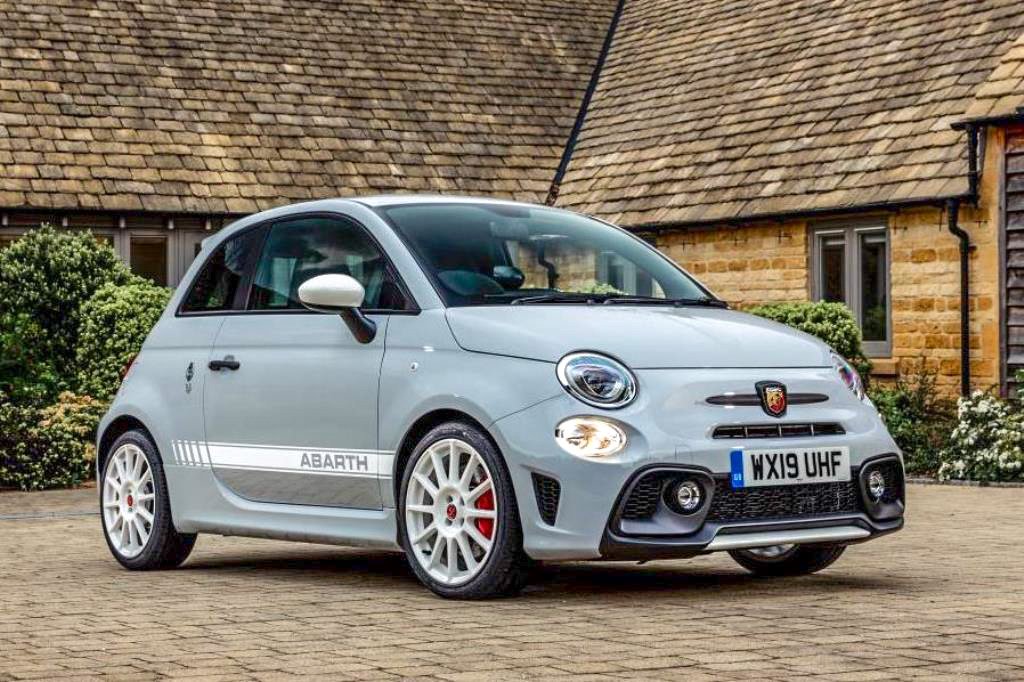 Abarth has unveiled updates for the 595 for its 2019 model year. Based on the Fiat 500, the Abarth 595 is available in three power outputs and a number of trims, which become more feral as you walk up through the range.

New for this year is the range-topping Esseesse (pronounced ‘SS’) model, which features an uprated exhaust system, brakes and suspension, while all 595’s wear bespoke badging to celebrate the manufacturer’s 70th anniversary. There’s also a ‘70th Anniversary’ limited-edition model based on the Competizione spec.

The standard Abarth 595 has a 1.4-litre turbocharged 143bhp petrol engine, while the Turismo model has a 163bhp version of the same engine and the Competizione and Esseesse models get 178bhp. New for 2019, Turismo models and above have an upgraded seven-inch Uconnect HD touchscreen with Abarth telemetry, plus Apple CarPlay and Android Auto connectivity, although the standard car makes do with a five-inch screen.

The Turismo is billed as slightly more relaxed and comfortable than the models with 178bhp. The specification for this model now includes the Urban Pack, which adds parking sensors and automatic headlights and wipers. Competizione, on the other hand, adds a sportier flavour with Brembo brakes, a Record Monza exhaust and Sabelt racing seats. 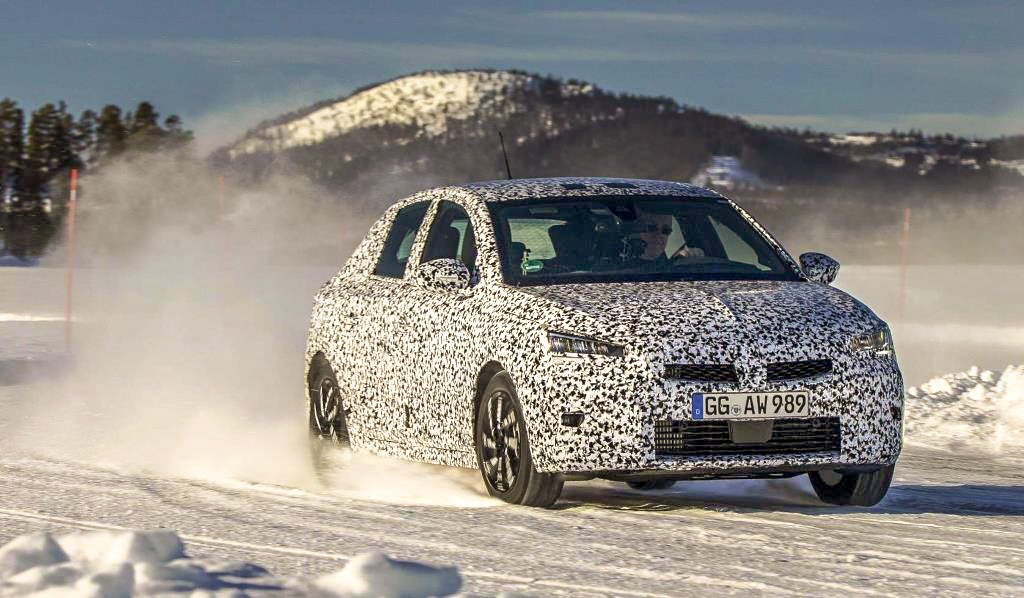 Vauxhall’s all-new fifth generation Corsa is close to the end of development and is set to become the most efficient Corsa ever when sales start in the summer.

Vauxhall engineers have used the long polar winters in Sweden for intensive testing on frozen lakes and on snow-covered roads. Pre-production cars have been lapping the test tracks at the test centre for handling tuning and the car has undergone electrical tests in the laboratory.

Thanks to lightweight engineering, the all-new Corsa’s weight has been reduced by more than 10 per cent (around 118kg) compared with the outgoing model. Vauxhall will also offer the Corsa for the first time as a battery electric vehicle.

Chassis engineers have been using the harsh extremes of the Swedish winter environment to put the car through extensive chassis tuning programmes for balanced handling and comfort, as well as refining electronic stability, traction control and anti-lock brake systems on slippery surfaces – working in temperatures as low as minus 30 degrees Celsius.

The new Corsa will offer a high level of safety, comfort and driving dynamics and strike a balance between the ‘fun-to-drive’ qualities expected of the Vauxhall hatchback, and the confines of the electronic stability programme. Vauxhall engineers repeatedly lapped the handling course using both the oval and special surfaces to continually optimise the control systems.

Testing with camouflaged mules began in Sweden last November. From January to March, the ice on the frozen lakes was around one metre thick, allowing the test cars, snow-ploughs and water sprinklers to drive on them.

During the long polar nights, the engineers benefitted from the adaptive IntelliLux LED matrix headlights first introduced on the current Insignia and which will be available for the first time on the new Corsa. 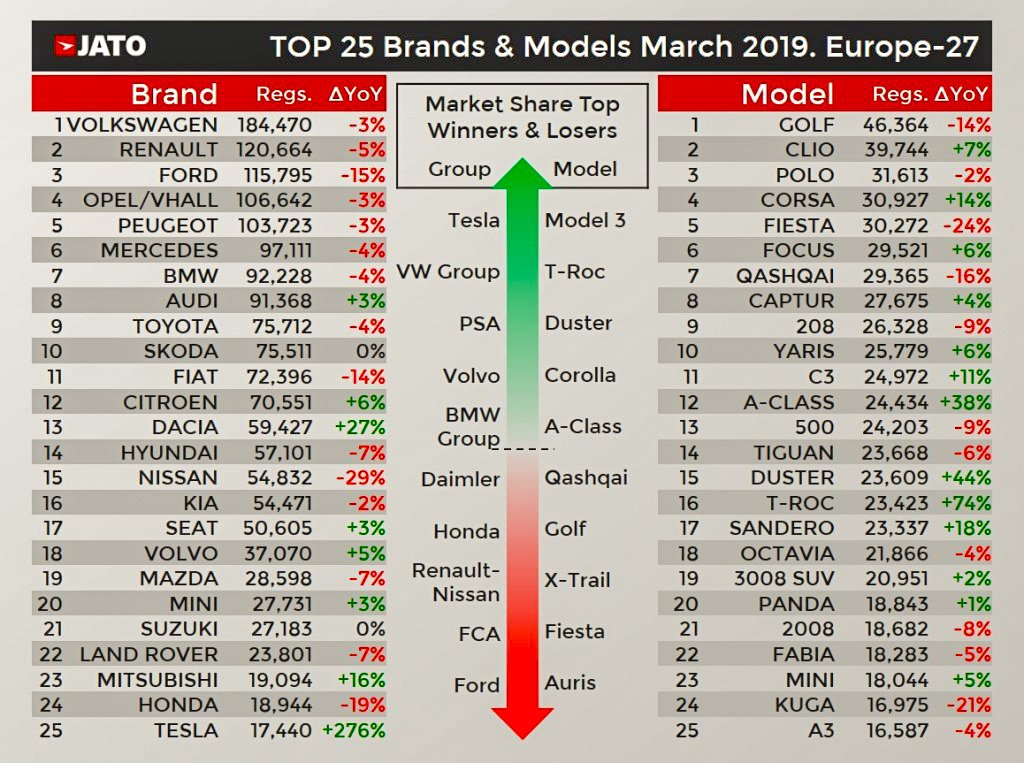 As the European car market registered its seventh consecutive month of decline in March 2019, the good news is that the electrification shift continues at pace.

The rapid volume growth of pure electric cars was mainly due to the outstanding results of Tesla. Thanks to strong demand for the Model 3, the brand entered the top 25 best-selling brands in Europe. Registrations of the Model 3 jumped from 3,747 units in February to 15,755 units in March – meaning it was Europe’s top selling electric car.

To discuss a great leasing deal on your BEV, PHEV or HEV, please call our friendly and helpful sales team on 01618 269716.

Darkness again falls on the Audi A6 range as the popular Black Edition specification becomes available for the latest generation Saloon and Avant models.

Based on the performance-focused S line specification, the Black Editions upgrade from a 19-inch wheel to a gloss turned 20-inch V-spoke design in matt titanium. They also feature a black finish for the radiator grille surround, front air intakes, door mirror housings and rear diffuser, plus the roof rails in Avant models. Privacy glass for the rear windows also helps to set the tone.

All the mild hybrid powertrains in the range can be combined with the new specification, from the 204PS and 245PS four-cylinder engines powering the 40 TDI and 45 TFSI through to the 286PS and 340PS six cylinder options in the 50 TDI and 55 TFSI.

Inside, there are front sport seats in leather and Alcantara, a perforated leather multifunction sport steering wheel with shift paddles and dark brushed aluminium inlays. Two full HD colour touch screen displays form the basis of the MMI touch response concept, and work in conjunction with a seven-inch full-colour Driver Information System in the instrument binnacle.

Prospective Black Edition drivers looking to take the on-board technology to the next level can opt for the Technology Pack which brings the upgraded MMI Navigation Plus system with Google Earth mapping, personal route assistance and enhanced natural voice recognition, plus a larger 10.1-inch upper MMI screen, the fully digital Audi Virtual Cockpit and the Audi Phone Box with wireless charging for QI-enabled compatible phones.

Other options such as powered door closure, acoustic glazing and a 1,920-watt Bang & Olufsen 3D sound system may be specified. There are also numerous electronic driver assists that can also be drafted in to make daily use easier for the driver. Several aids including adaptive cruise assist, side assist, camera-based traffic sign recognition and high beam assist, are grouped into cost-effective Tour and City Assist option packs.

To discuss a great leasing deal on your Audi A6 Black Edition, please call our friendly and helpful sales team on 01618 269716. 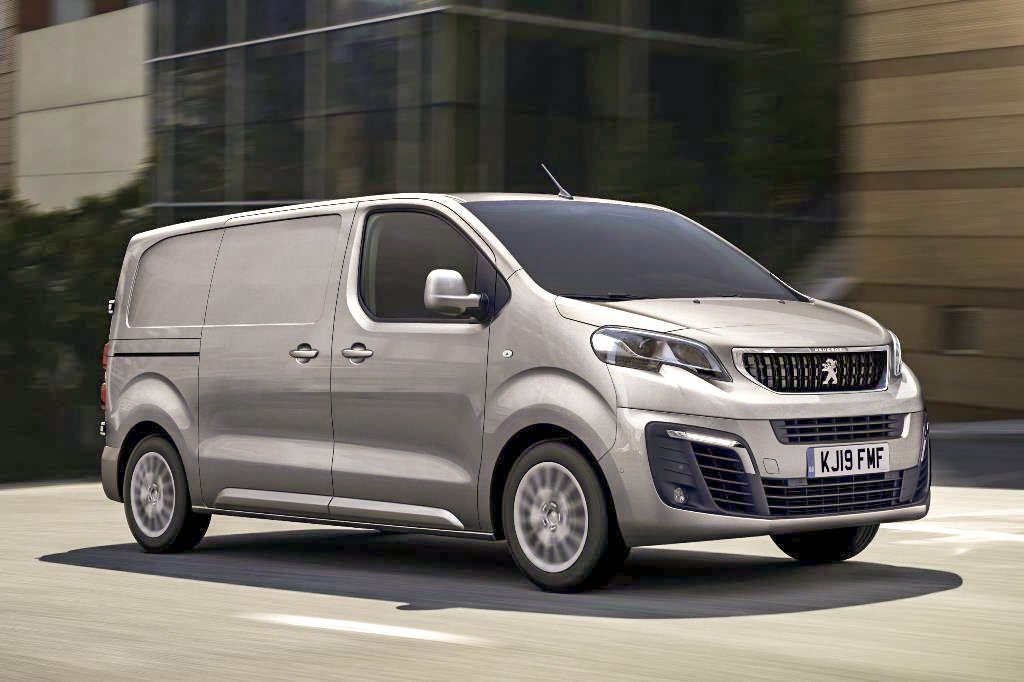 PEUGEOT is launching a revised Expert van range for its 2019 model year. The updated Expert will be available with four trim levels: S, Professional, Grip and Asphalt.

Expert Grip has been developed for van operators needing to maximise payload, load volume and carry up to three passengers to locations of variable surface quality. There’s the Moduwork bulkhead with load-through flap, a dual passenger bench seat with fold-up outer seat and fold-down writing table.

The Grip variant rides 20mm higher than the standard Expert and has an extra thick sump guard and enhanced traction thanks to Peugeot’s Grip Control. Grip versions offer payloads of up to 1,400kg and are equipped with 17-inch steel wheels fitted with all-season Mud and Snow tyres.

Expert Asphalt wears smarter 17-inch alloys and is aimed at van operators who make longer trips or numerous deliveries both inside and outside of urban areas. Models benefit from a range of driver assistance systems such as Connected 3D navigation and DAB radio with voice recognition.

All engines in the 2019 Expert line-up are fitted with stop/start technology to reduce emissions and fuel consumption and comply with the WLTP fuel consumption and emissions testing Euro 6.2 requirements. New to the Expert engine range is the 1.5-litre BlueHDi 100 diesel engine, already widely used in the firm’s car range.

All other engines in the 2019 Expert range are 2.0-litre units and comprise of a BlueHDi 120 and BlueHDi 150 offered with a 6-speed manual transmission and the range-topping BlueHDi 180 engine. As previously, the BlueHDi 180 engine is paired only with an automatic transmission, but this time its Peugeot’s all-new EAT8 eight-speed auto.

The refreshed Expert range will be available from May 2019 production. To discuss a great leasing deal on your Peugeot Expert, please call our friendly and helpful sales team on 01618 269716.