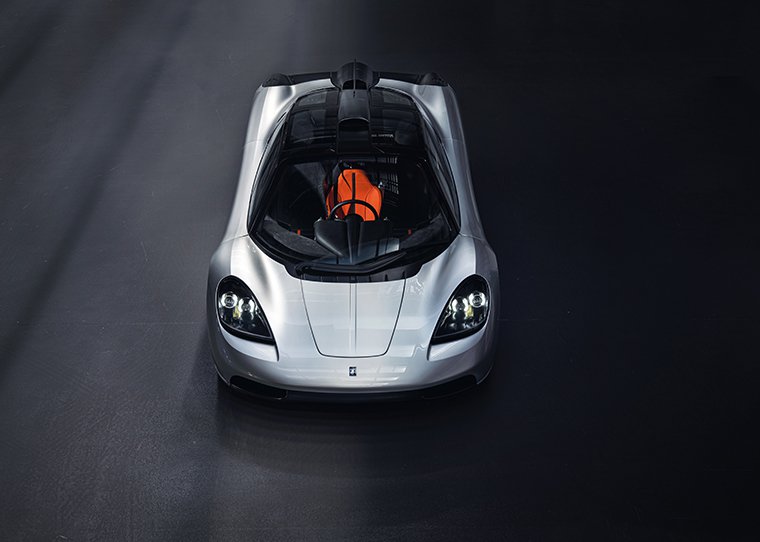 Gordon Murray world renowned vehicle designer and best known for his exploits in Formula 1 in the 70’s and 80’s before going on to design and develop the McLaren F1 in the early 90’s which became the world's fastest production car, later seeing success in motorsport and Le Mans in the mid 90’s, has released its natural successor the GMA  (Gordan Murray Automotive) T.50. The T.50 is the money-no-object and blank piece of paper design evolution of the McLaren F1, the silhouette of the original is there, whilst the T.50 is shorter, wider due to the 65º vee engine but you can see its design cues. Over the past 6 months there has been a steady stream of information appearing about the T.50 and dialogue from the man himself about the T.50 concept. It was officially debuted to the world yesterday and we have all the facts and figures.

The T.50 will be powered by a naturally aspirated V12, able to rev to 12,100rpm and available in rear wheel drive and manual 6 speed transmission only, harking back to the lost era of purely analogue sports cars from the 90’s. Steering is supplied by the purest and simplest method a rack and pinion steering rack, with low speed assistant giving the driver the most amount of feedback and driver engagement.

The Cosworth designed V12 is 3994cc in capacity and supplies its peak power of 654bhp at 11,500rpm, with another 600rpm of pure swan song to get the hairs on the back of your neck standing on end. Carbon fibre is used for the body panel’s saving weight whilst adding strength, to the 3-person monocoque chassis. Just like the McLaren F1 the driver has a central jet fighter seating position with the 2 x passenger seats either side, slightly set back.

Continuing the analogue theme, the interior is minimalist and functional and a lack of technology. Controls are done by turning a knob, a beautifully engineered and crafted billet aluminium knob no the less. The instrument cluster is dominated by a large rev counter centrally positioned a nod to racing heritage and the T.50 linage. The T.50 is an anniversary piece for Gordon Murray, being his 50th year in the automotive industry and 50th design in his road and race career. Only 100 units will be built, with a starting price of £2.36 million before local taxes, its allocation of 100 have nearly all sold out with strong sales numbers in America and Japan.