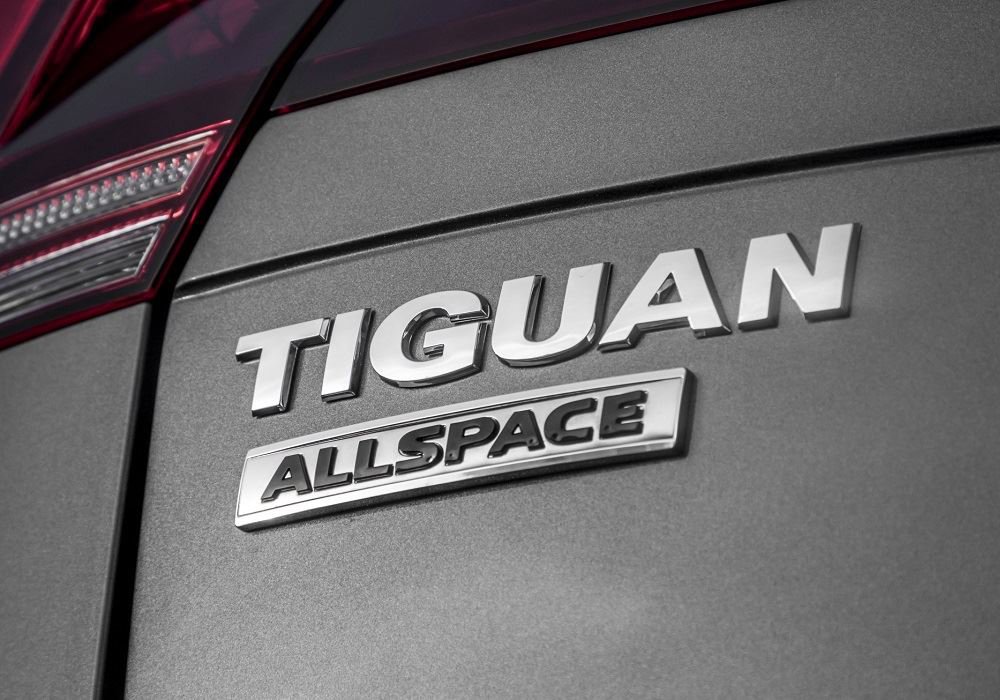 Understandably, you’re tempted by the impressive and significantly improved Volkswagen Tiguan released in 2016 – but you need more room for your growing family and the second Alaskan Malamute you got the children for Christmas. Despair not, VW have introduced a seven-seat Tiguan called the Allspace. 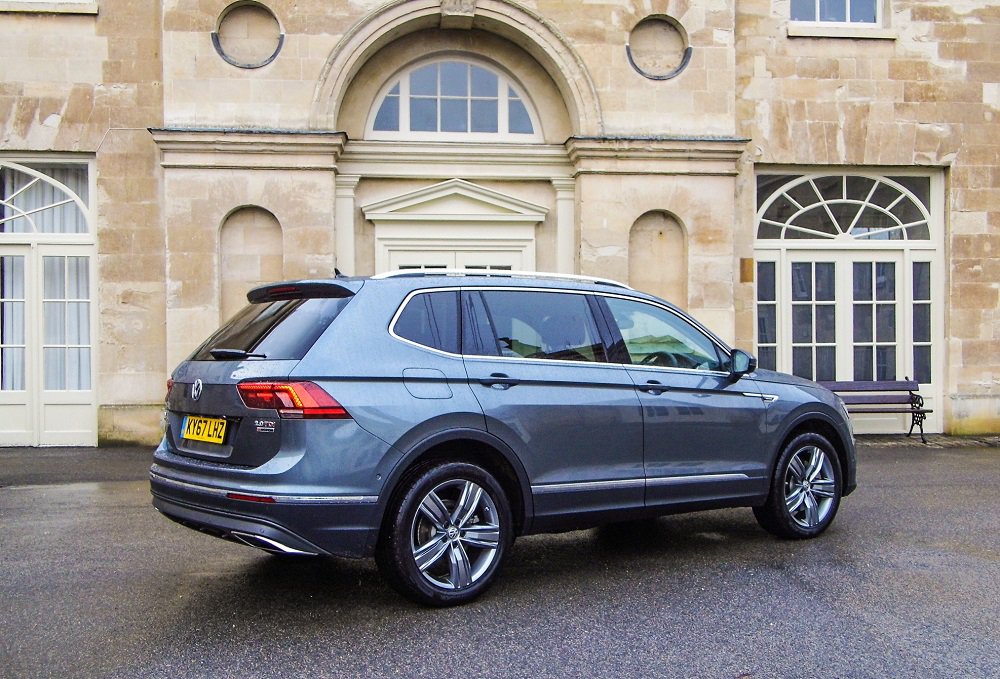 The original, five-seat Tiguan this week celebrated its tenth UK anniversary and sales of the all-new and significantly improved 2016 Tiguan have risen to become VW-UK’s third-best selling model behind the Golf and Polo.

So, what’s to make of the new, Mexican-built Tiguan Allspace and does it offer more than just an occasional third row of seats? Well, quite a lot, actually…and yes. 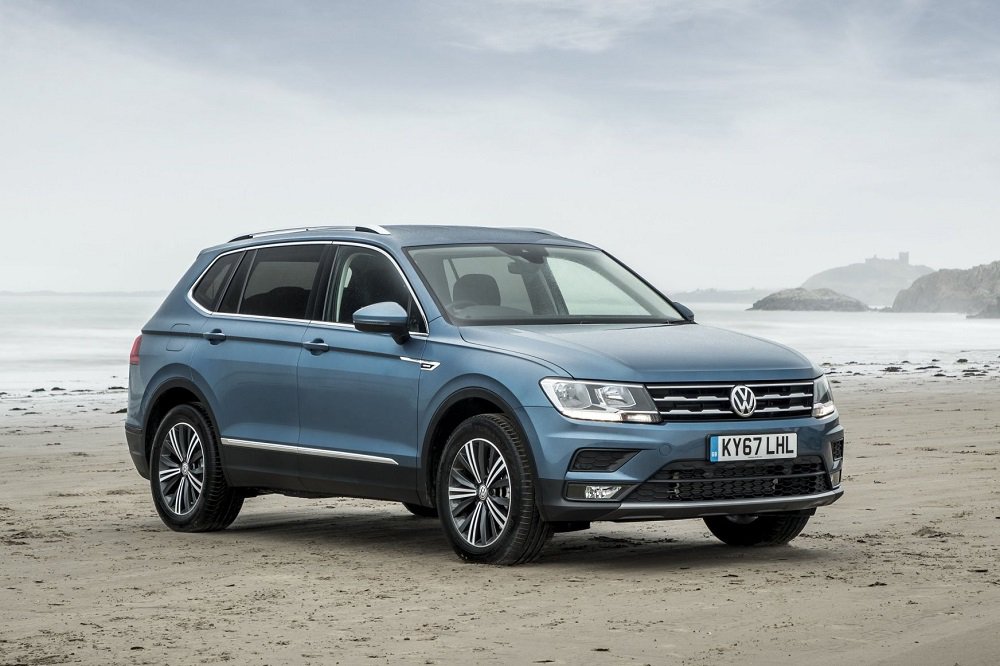 The Tiguan Allspace uses a stretched version of VW’s versatile MQB platform to provide two extra occasional seats, more interior space and a bigger boot and closes the gap – that we didn’t know was there – between the Tiguan and Touareg in the Volkswagen SUV line-up. It is 21.5cm longer than the standard Tiguan, stretching to 4.7 metres.

Aside from being visibly longer, the Tiguan Allspace remains distinctly Tiguan but wears some unique design tweaks. The rear doors are also longer to accommodate those in the rearmost seats. Riding higher than the standard Tiguan, there’s a new front grille and redesigned bonnet with different accent lines, particularly on its leading edge and the contours of the C-pillar are also new. 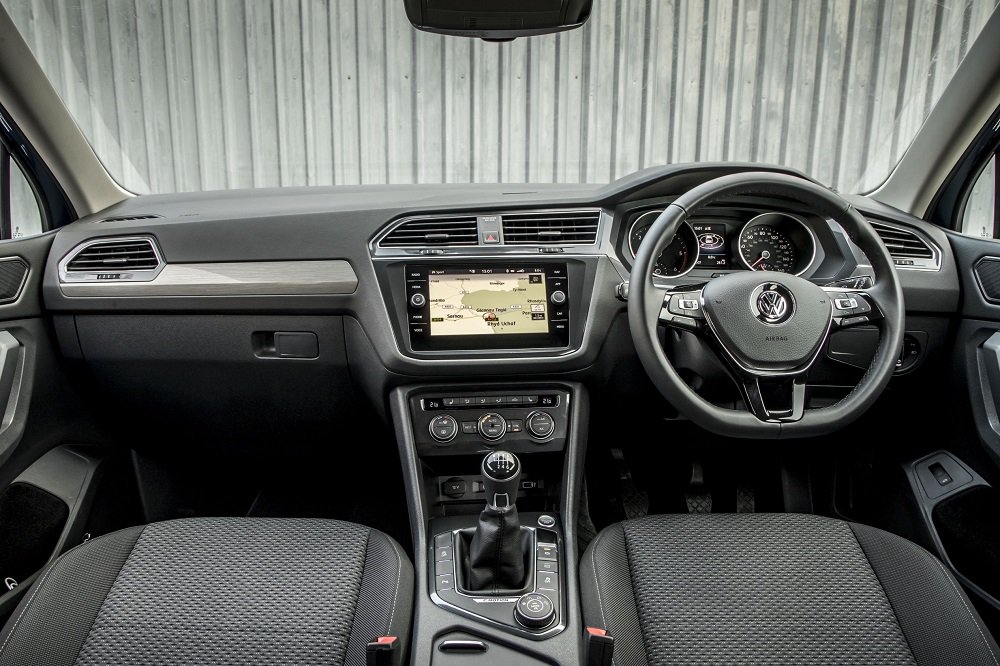 On the inside, there is little change from the standard Tiguan and the cabin continues to reflect Volkswagen’s reputation for classy – if not overly premium – interiors. Dashboard layout is identical with minimal switches and controls logically arranged.

New, though, is Volkswagen’s new-generation Discover Media and Navigation infotainment system which combines a touchscreen with eight buttons taking you directly to different sections of the system. Conveniently, its screen colouring is adjustable but mostly dark which makes it easy to read even if the sun is shining on it. 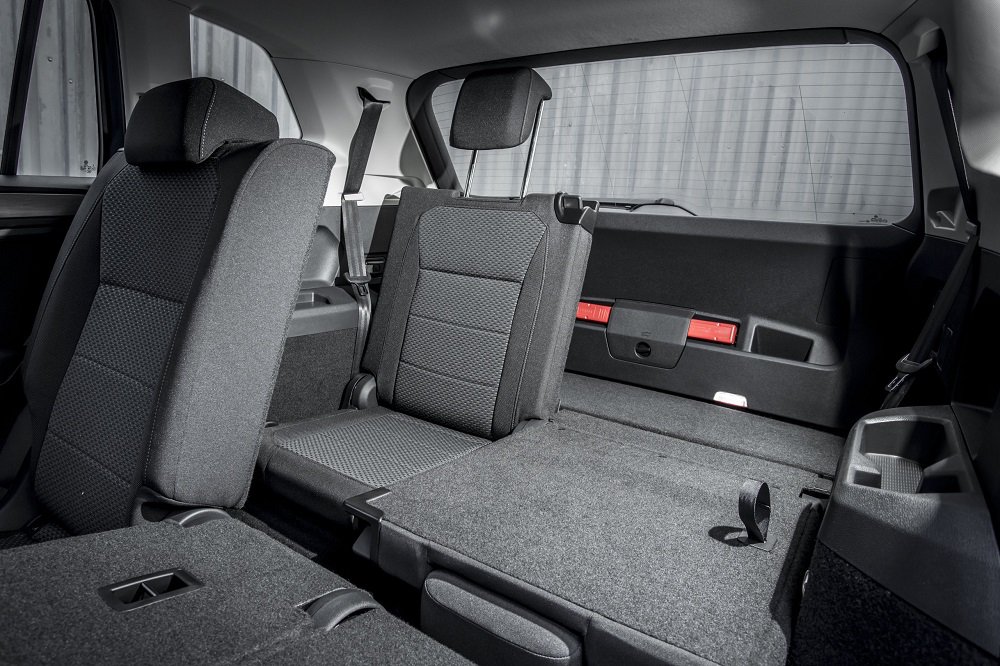 There are plenty of soft-touch materials dotted around the cabin and, although some panels – like a couple in the doors and in the foot wells – don’t carry much quality, they feel very solid and hard-wearing and don’t detract from the general feeling of Germanic sophistication.

Thanks to the extendable adaptability of the MQB platform on which the Allspace has been built, there’s noticeably more space throughout than the five-seat Tiguan. Passenger space in row two is particularly generous but leg, elbow and headroom in row three is adequate for shorter journeys or smaller, sulky ‘tweeners who just want to be as far away from anyone else as possible. 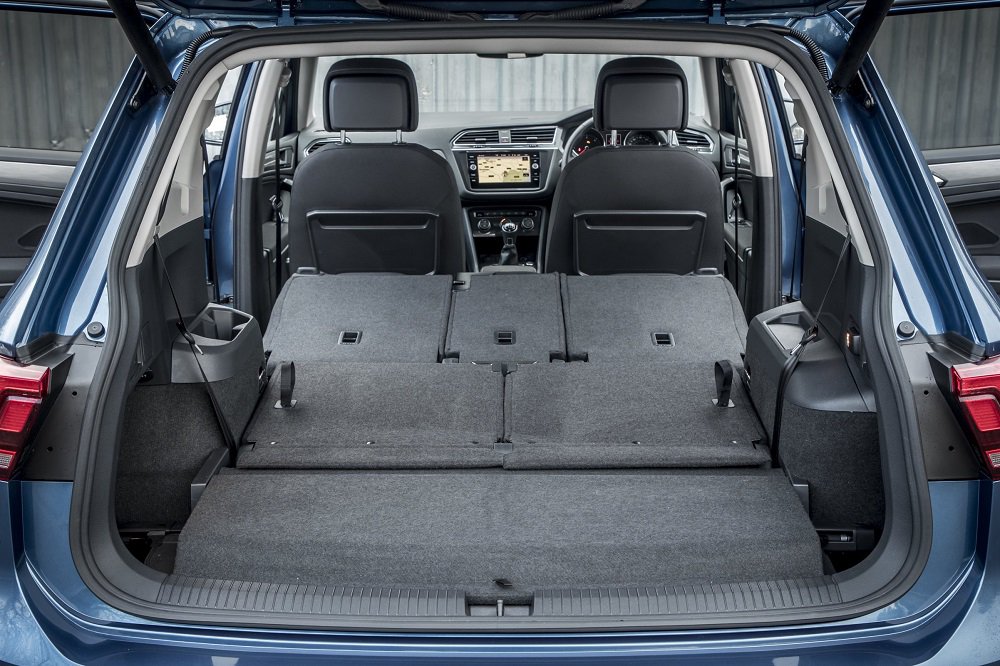 With five passengers on board, luggage capacity increases by a 145 litres compared to the standard model, providing up to 760 litres of boot space. When not in use, the third row of seats can be folded away into the floor, while maximum storage with the second and third rows down is a cavernous 1,775 litres. However, with all three rows in place the boot capacity is reduced to just 230 litres so you may need to accessorise with a roof-box on occasion. 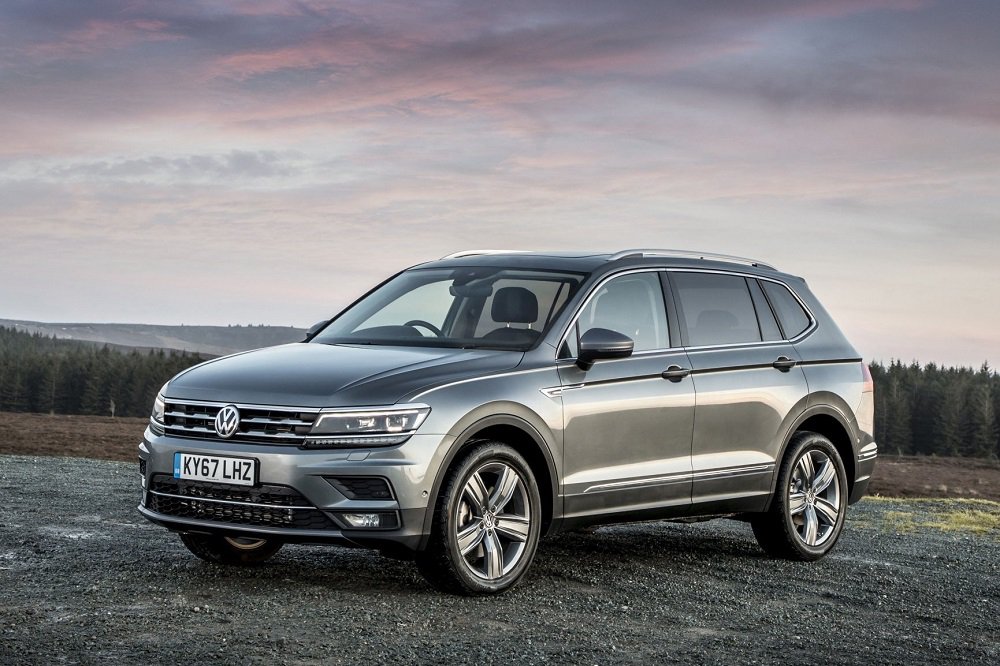 R-Line adds 20-inch alloys (which are not as compromising as they sound), an exterior R-Line styling pack and R-Line logos inside and out, but none are particularly subtle. 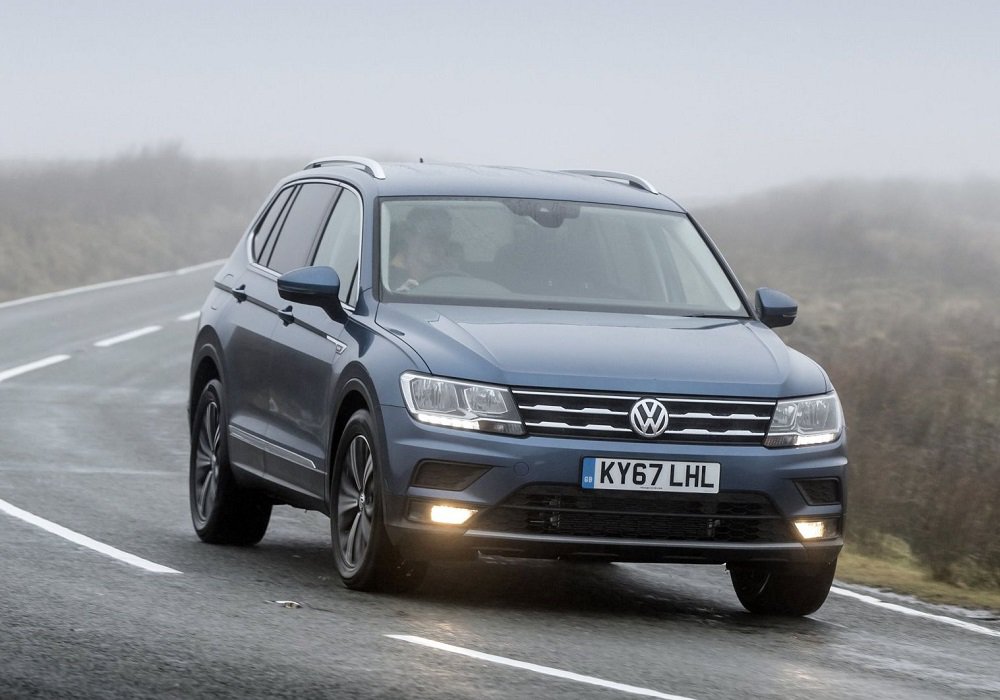 Available with front-wheel or four-wheel drive, the engine and drivetrain options for the Tiguan Allspace are broadly similar to the Tiguan, comprising of two petrols and one diesel engine, with power and torque outputs spanning 150PS/250Nm and 240PS/500Nm.

The 1.4-litre petrol is available as front-wheel drive only and benefits from Volkswagen’s ‘active cylinder technology’, which means two of the four cylinders shut down to save fuel when the car is cruising. The 2.0-litre 180PS petrol unit is available exclusively with 4Motion all-wheel drive and a seven-speed DSG automatic gearbox. The Allspace SUV will do everything the standard Tiguan does, with towing capacities of 2.5 tonnes for the four-wheel drive versions and 2.2 tonnes for front-wheel drive. 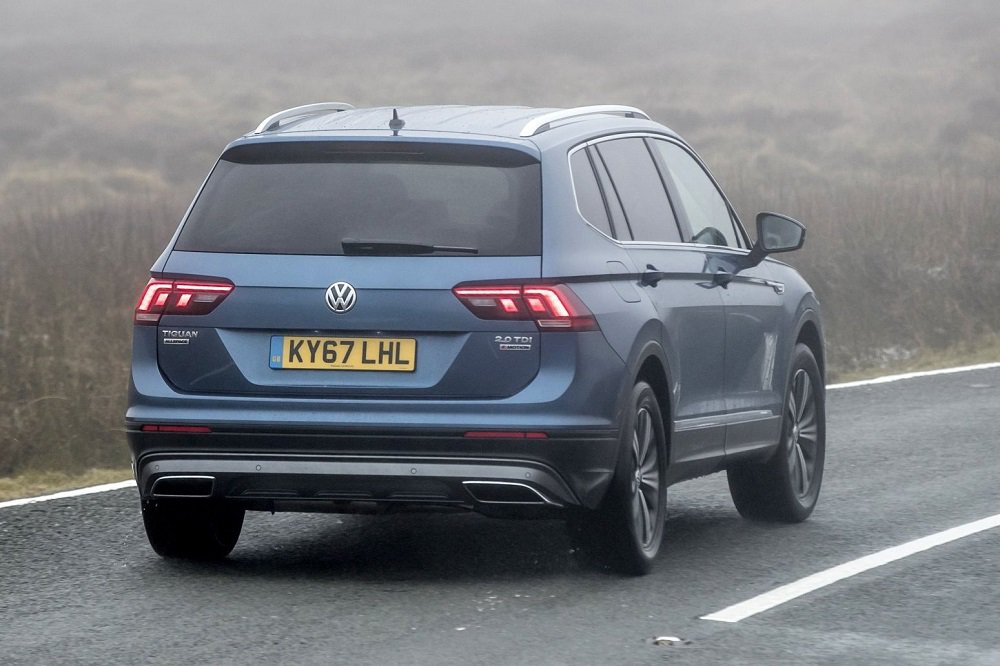 There are no changes to the engineering set-up of this Allspace model over the ordinary Tiguan, but Volkswagen worked hard to ensure that this variant's extra 215mm of body length doesn't upset that car's reassuring handling balance.

On the road, the Tiguan Allspace is unlikely to set pulses racing, but it's very quiet and smooth, especially when fitted with the optional adaptive dampers that allow you to control how soft the suspension is. When in Comfort mode, the adaptive dampers make the Allspace very comfortable, even over poor road surfaces and with the larger 20-inch wheels fitted.

As with the Tiguan, the handling of the larger Allspace is equally resolved and there’s much less body roll in the corners than you might expect considering its extended chassis. This is helped by some noticeably well-weighted steering and the car is easy to place accurately and with confidence. In general terms, the Tiguan Allspace does a good job of isolating you from wind and road noise and feels very car-like and easy to handle.

The 4Motion all-wheel drive variants offer multiple driving modes, so if you plan to take the Tiguan Allspace off-road or live in a hilly, rural location, a 4Motion variant should fit the bill. The selectable driving modes tailor the traction and stability control systems to cope with everything from icy roads to muddy tracks. The standard, second-generation Tiguan gained five stars in its Euro NCAP crash test last year and while the Allspace has yet to be tested in isolation, this is a good indicator of what to expect. It scored an excellent 96% rating for adult occupant protection and 84% for child occupant protection. As with the standard Tiguan, there's very little not to like with the Allspace. All the established Tiguan virtues remain – impressive driveability, high efficiency and strong build quality. That third row of seats, as with most seven-seat SUVs, is largely superfluous. The main benefit of the Allspace is greater interior space and a much larger boot.

There’s one easily-resolved sticking point, however: Retail pricing for the Tiguan Allspace starts at heart-stopping £29,370. That’s £2,645 more than an equivalent Tiguan, which even on a monthly PCP deal looks steep.

If the Tiguan Allspace is for you and yours, then leasing is clearly the better option.