Volkswagen T-Cross: Dotting the i’s and crossing the t’s

Taking an upward range walk, the T-Roc is followed by the five-seat Tiguan, the seven-seat Tiguan Allspace and the flagship Touareg. 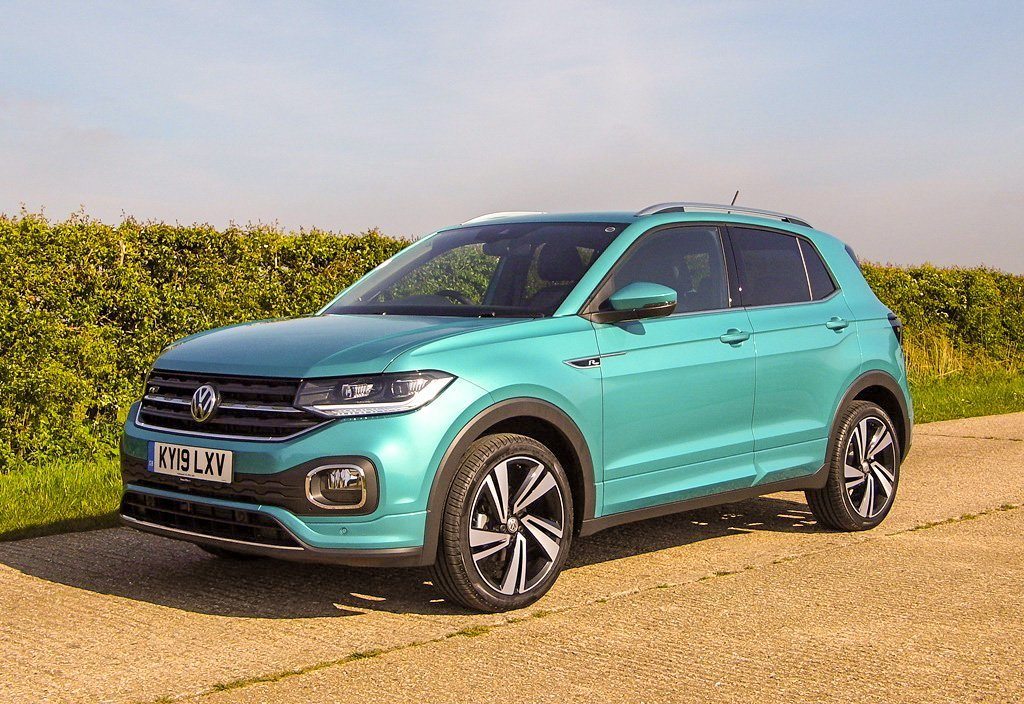 Unmistakably an SUV, the compact T-Cross is not an all-roader capable of taking you and yours to the back of beyond and, er…back again. Available only as front-wheel drive, the T-Cross is not for wet fields or riverbeds.

You would be thinking along the right lines if you regard the T-Cross as an alternative, more fashionable body style for the Polo, with its high-riding seating position and commanding view of the road. Besides, both share the same MQB A0 platform as their respective VW Group sister cars, the SEAT Ibiza and Arona, as will the imminent Skoda Kamiq. 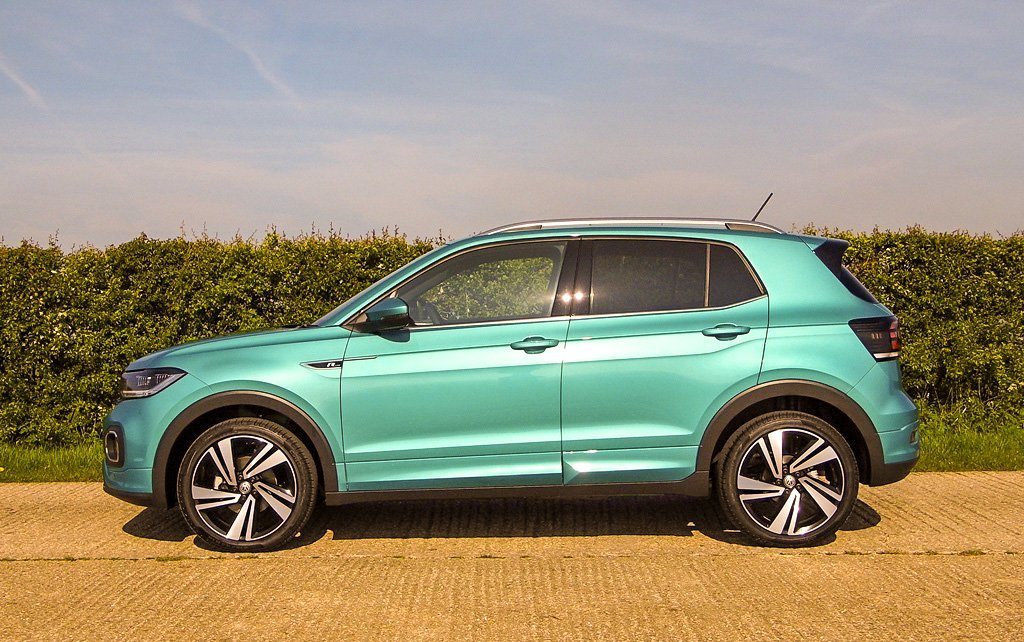 Earlier this week I was at the UK media launch of the new T-Cross and – with a lunchtime plane to catch 60 miles away – enjoyed an all-too brief drive in ‘LXV’ offered in R-Line trim grade, fitted with the 115PS turbocharged 1.0-litre, three-cylinder TSI engine. It was paired to VW’s seven-speed DSG automatic ‘box and finished in the eye-catching ‘Makena Turquoise’.

The new T-Cross is built in the same Spanish factory as the Polo but is 54mm longer and 150mm taller. You sit almost 100mm higher than in the Polo, too. 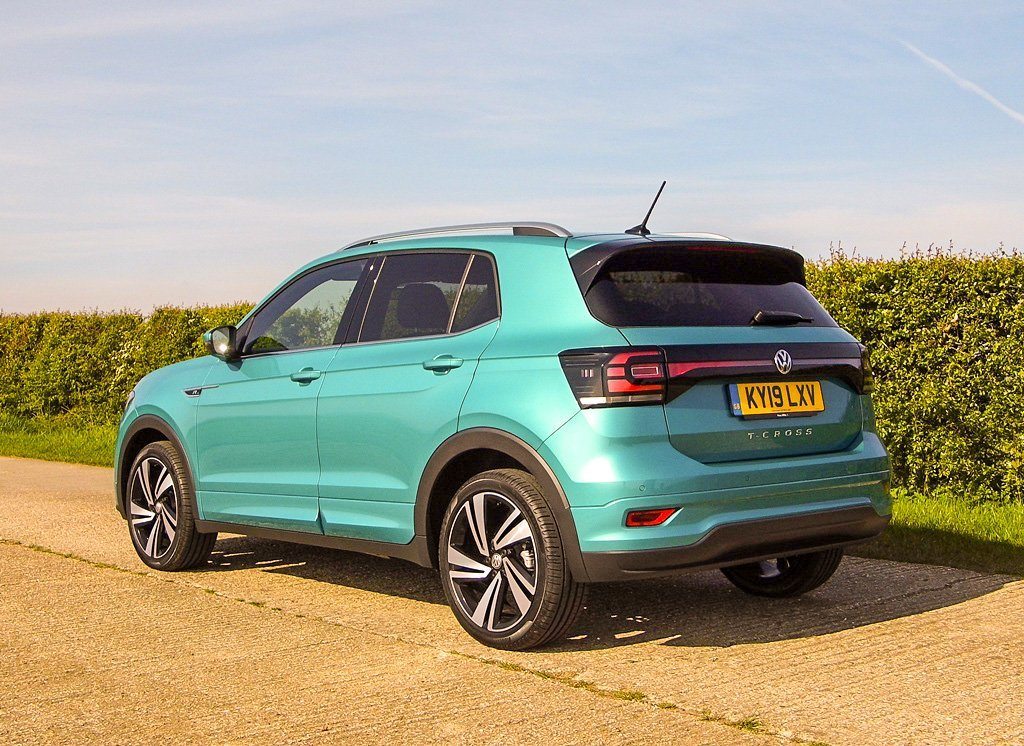 Outwardly, the beefy-looking T-Cross is more of a traditional, two-box SUV shape than its larger T-Roc sibling and many of its market competitors. This default profile helps maximise interior space, while maintaining the chunky, rugged look that many buyers of small SUVs prefer.

There is a good palette of exterior colours from which to choose, along with more traditional neutral tones. Vibrant colours such as Flash Red, Dark Petrol Blue, Champagne Silver, Reef Blue, Energetic Orange and Makena Turquoise are offered, in addition to design packs in Black, Energetic Orange and Bamboo Garden shades. 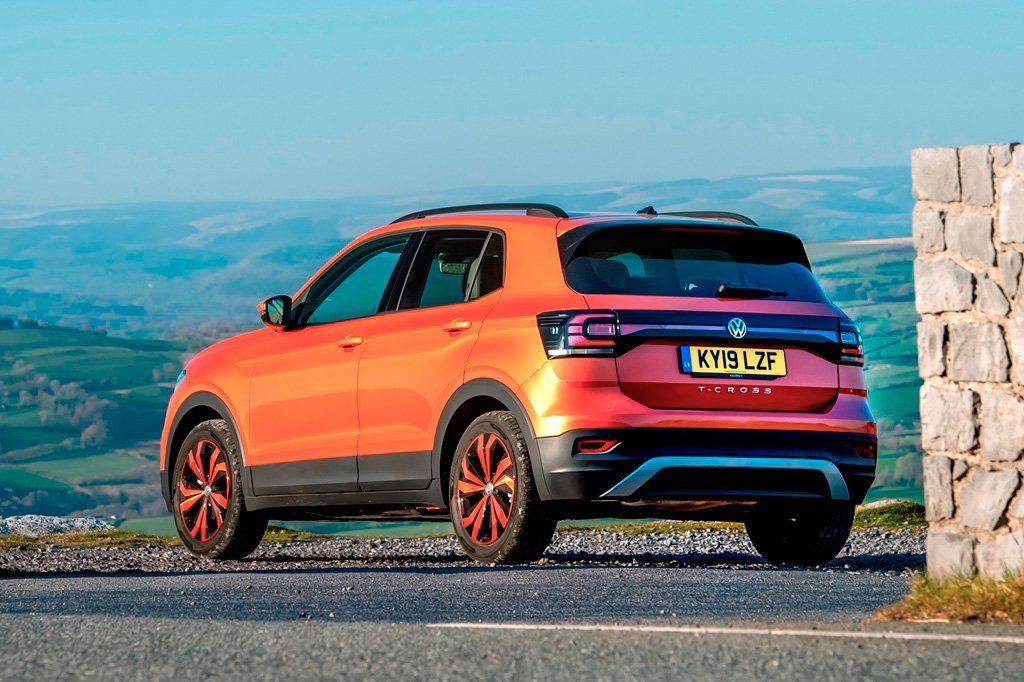 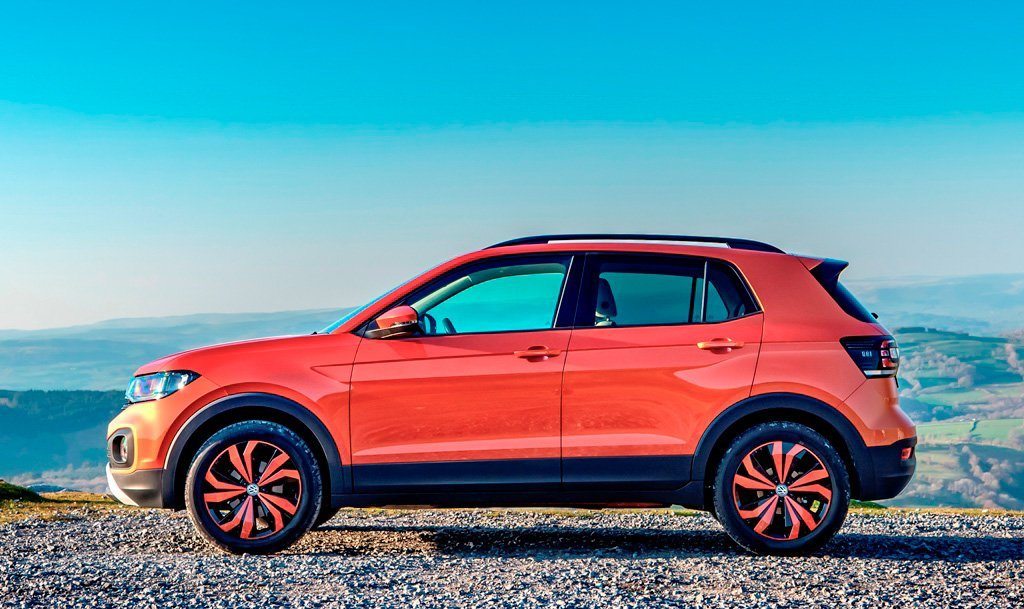 The interior is a strength of the T-Cross and, in some places, its weakness. It feels more upmarket than most of its rivals and for buyers who don’t need a larger SUV but value a quality feel, the T-Cross makes perfectly good sense. 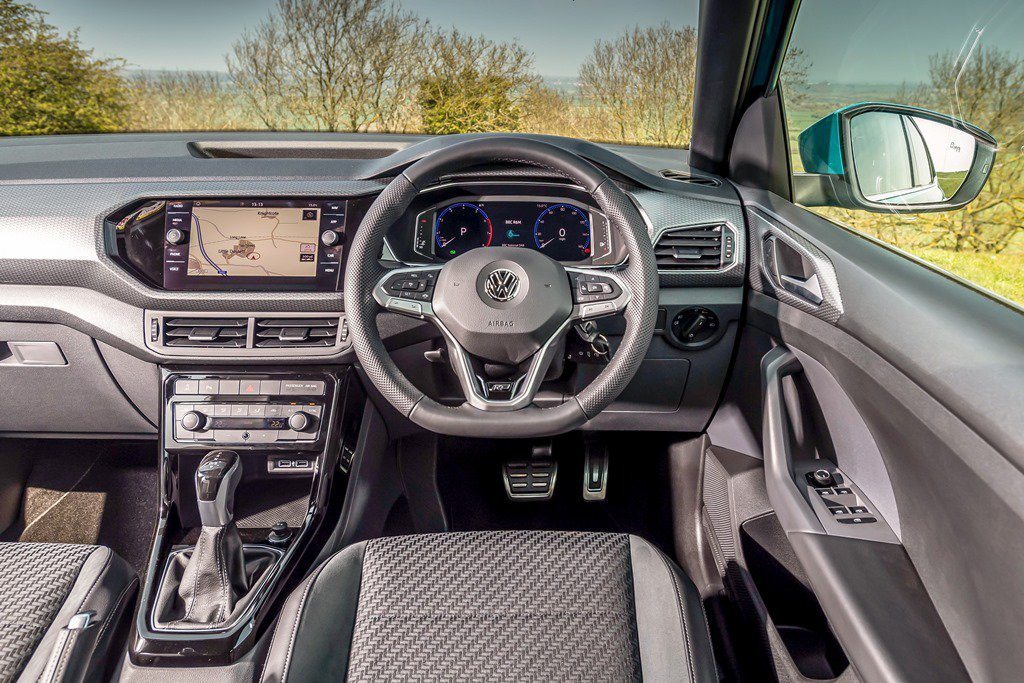 Volkswagen is known for its upmarket interiors and the T-Cross is no different, but if the standard silver interior trim doesn’t appeal, you’ll be able to choose a range of different options and even match the dashboard to the exterior paint colour.

Just like any other VW product, the build quality in the T-Cross is impressive. For an entry level model in VW’s SUV range the T-Cross is solidly built, with a reassuring feel to the controls, and feel of quality is further enhanced by a gloss black lower centre console surround and silver inlays on the steering wheel. 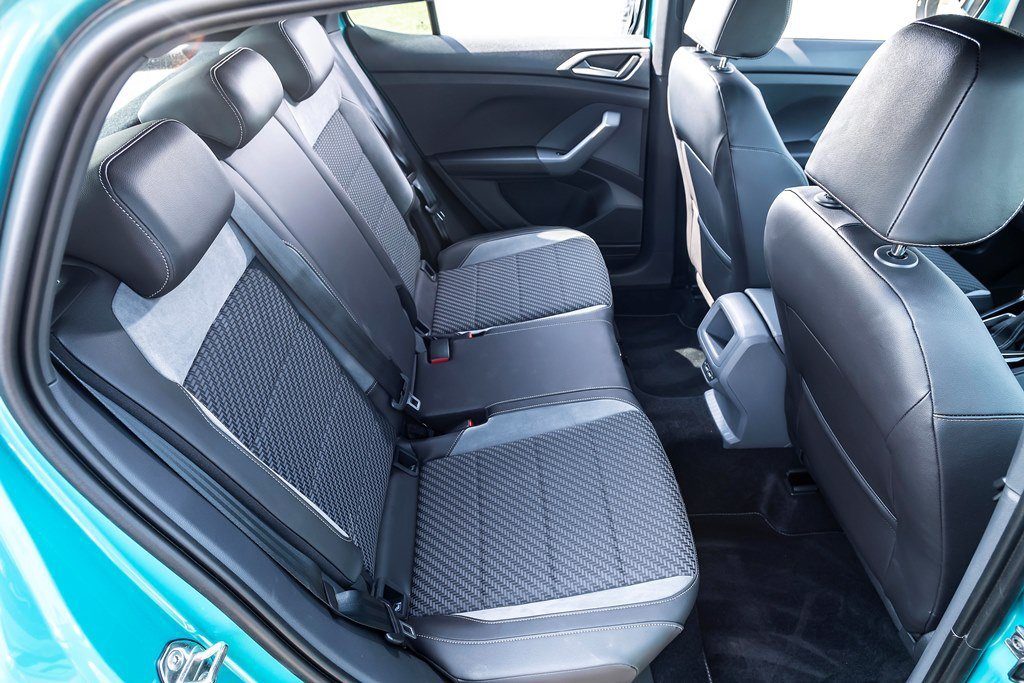 Volkswagen has also chosen to stick with a manual levered handbrake, instead of switching to an electric version. The steering wheel now houses the cruise control buttons, instead of the 3rd steering wheel stalk on previous VW Group models.

The extra dimensions of the T-Cross over the Polo transfers well to greater interior space and the large windows allow the cabin to feel light and airy. 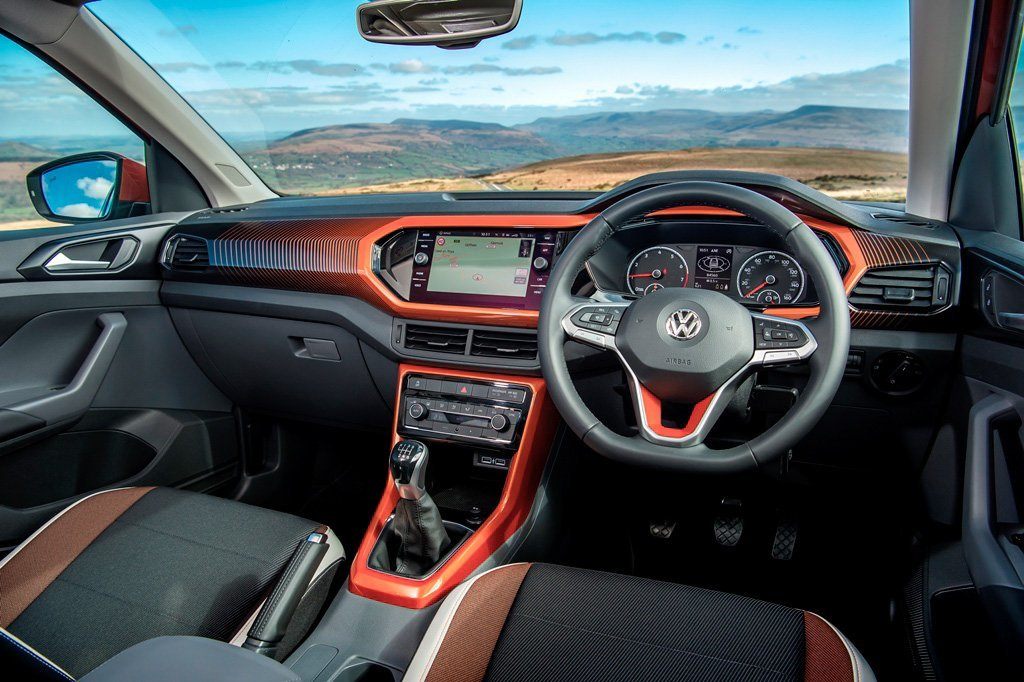 The extra headroom afforded by the taller body will be a big draw to many customers, as it makes the T-Cross that bit more practical than the Polo and was plenty spacious enough for two rear adults to sit behind a front pair of grown-ups. 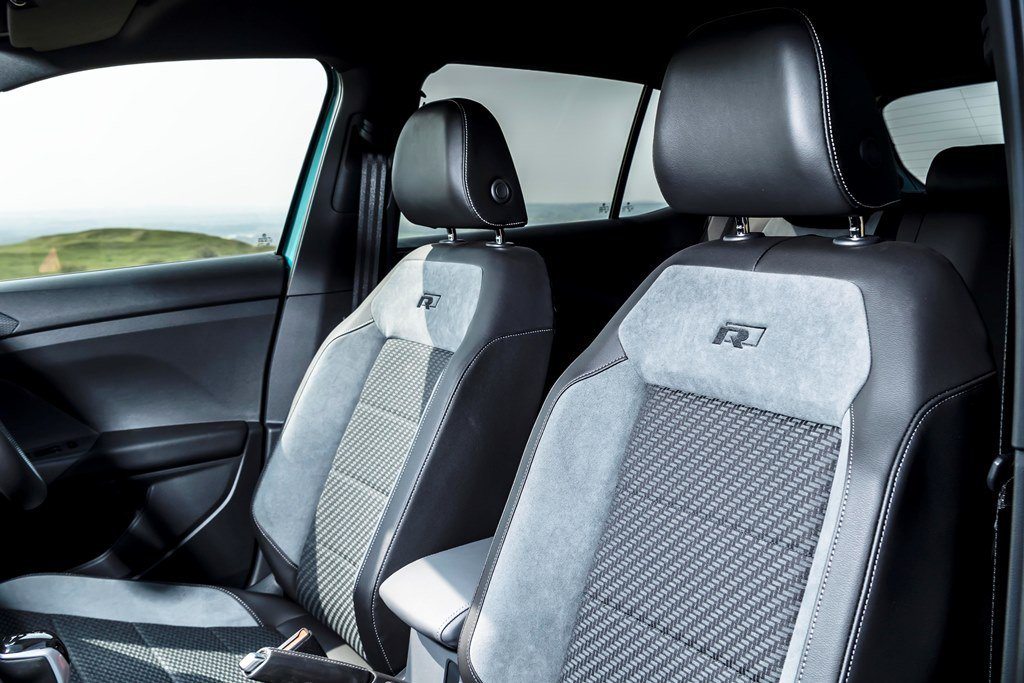 The rear seats have a clever spilt and slide mechanism, where either side of the 60:40 split can be slid backward or forwards, giving more passenger leg room, or extra boot space.

However, if you regularly carry passengers you’ll want to keep the rear seats pushed as far back as they’ll go as rear legroom all but vanishes with the seats fully forward.

In terms of boot space, the T-Cross leaves its rivals far behind.

The T-Cross offers between 385 and 455 litres with the rear seats up, depending on where you position them within the 140mm sliding range, but even the smaller number is five litres bigger than the boot in the Volkswagen Golf. With the rear row pushed as far forwards as it will go, the boot is no longer flat and exposes a large channel where the seats were, which your possessions will fall into if they aren’t secured. 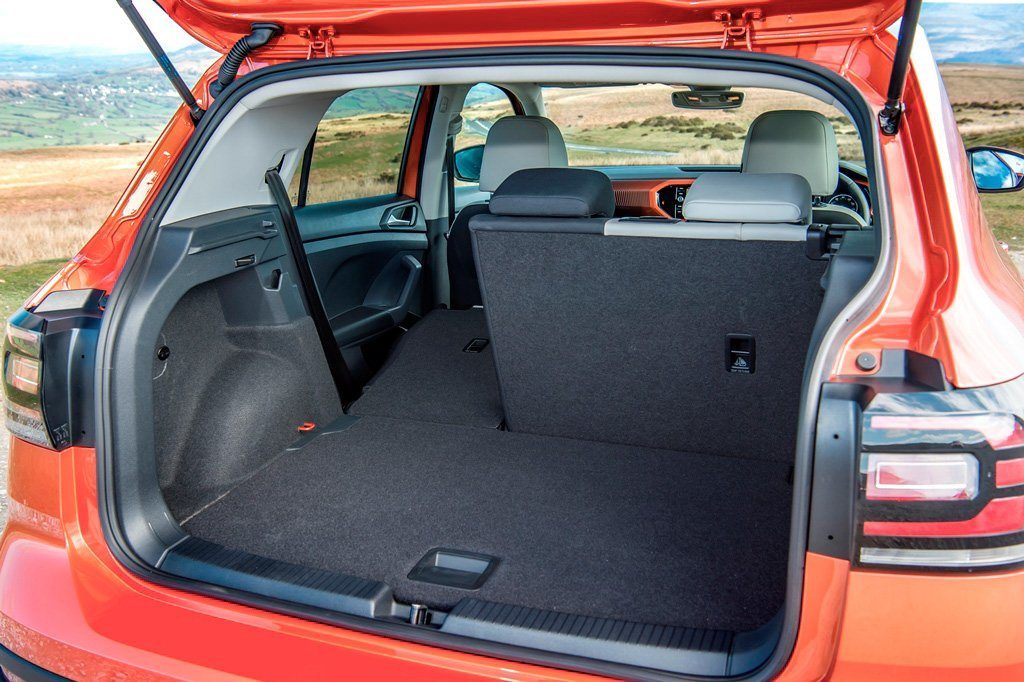 Flip those seatbacks down and you’ll have a handy 1,281 litres to fill and, you can fold the front passenger seat flat to accommodate longer items for that trip to IKEA you’ve been dreaming of for such a long time.

If you’re familiar with Volkswagen’s usual trim grade hierarchy, the S, SE, SEL and R-Line trim grades on the T-Cross will be of little surprise. 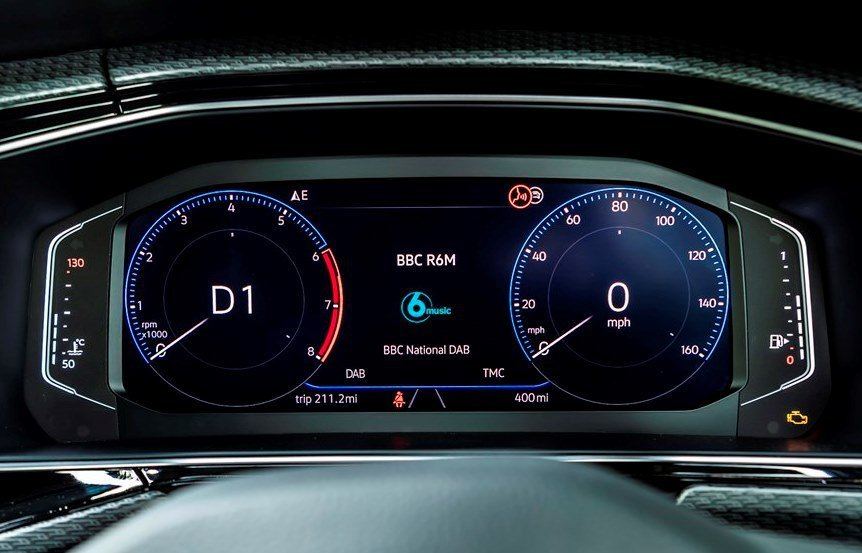 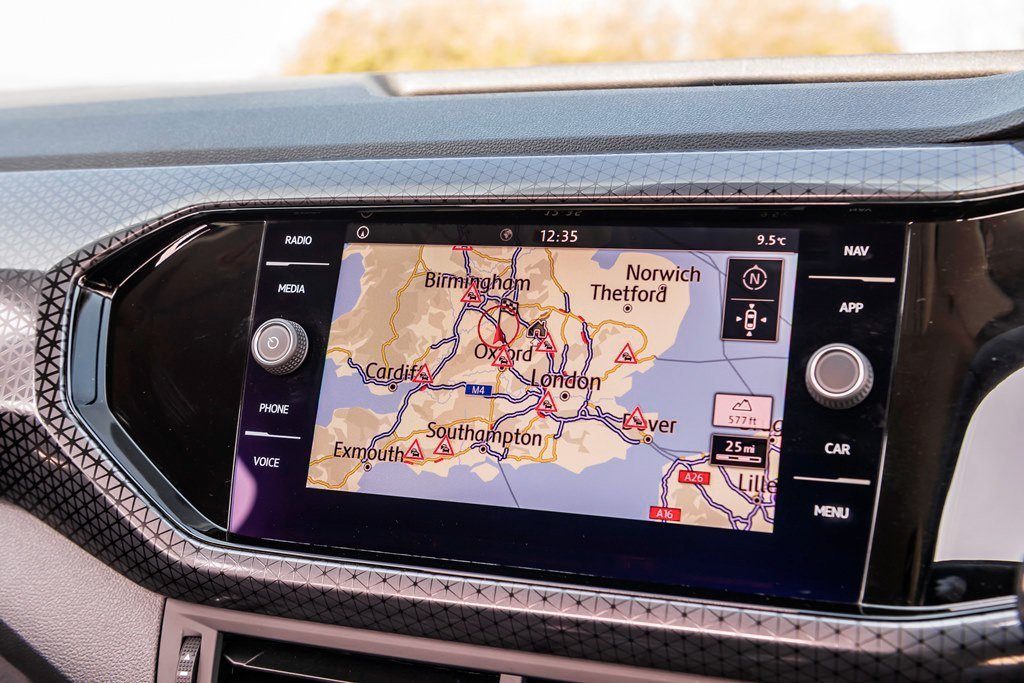 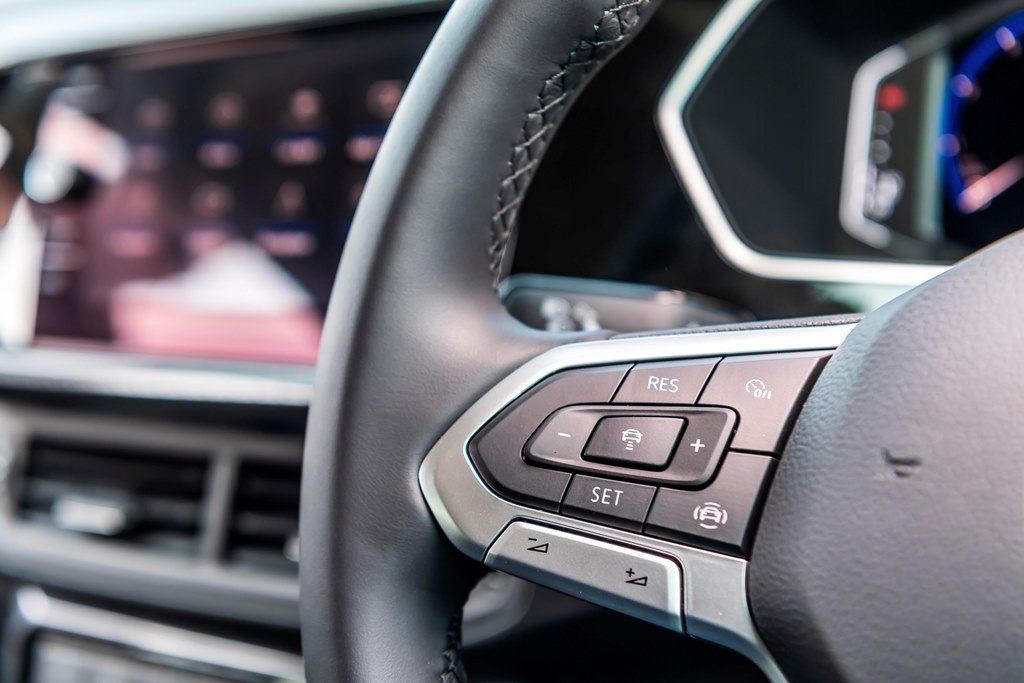 In additional to the standard kit list, the T-Cross is available with a range of goodies from an expansive options list. These include the usual alloy wheel upgrades and pricier paint finishes, but also offer individual options such as a reversing camera, navigation, a Beats audio package upgrade and the Active Info Display.

As with other brands, Volkswagen offers the T-Cross with a few option bundles, but in this case limited to bold design packs. Available in Black, Energetic Orange and Bamboo Garden Green, these comprise of colour-keyed alloy wheels, dashboard panels and seat upholstery. 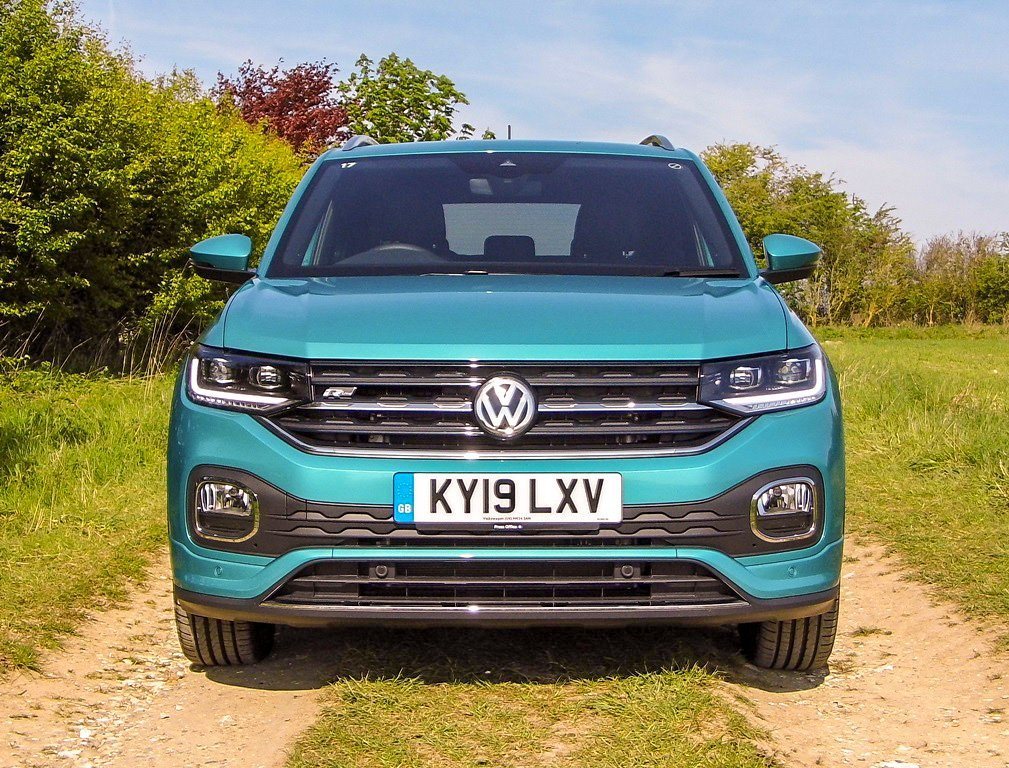 Connectivity is high on the agenda for the T-Cross as all models above range-entry S trim come equipped with Car-Net App Connect, which combines the functionality of Apple CarPlay, Android Auto and MirrorLink allowing ‘mirroring’ of a smartphone display on the infotainment touch-screen, via a USB connection. At SE spec and above, the T-Cross is equipped with four USB charge points for passenger’s devices – two in the front and two in the rear. 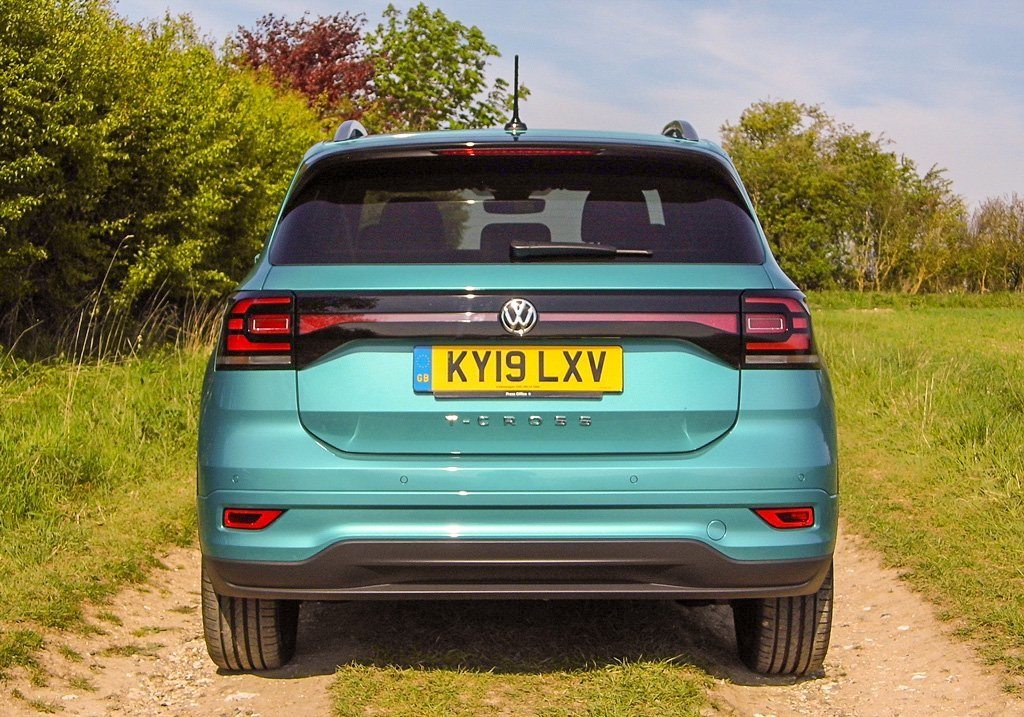 With the T-Cross, Volkswagen has elected not to offer their 1.6-litre TDI diesel to the UK market as only a very small percentage of small diesel-powered cars are sold.

At launch the T-Cross is offered with a choice of two 1.0 TSI turbocharged three-cylinder engines, in 95hp and 115hp outputs. The 150hp 1.5-litre TSI Evo turbocharged four-cylinder will be available in the second half of 2019. 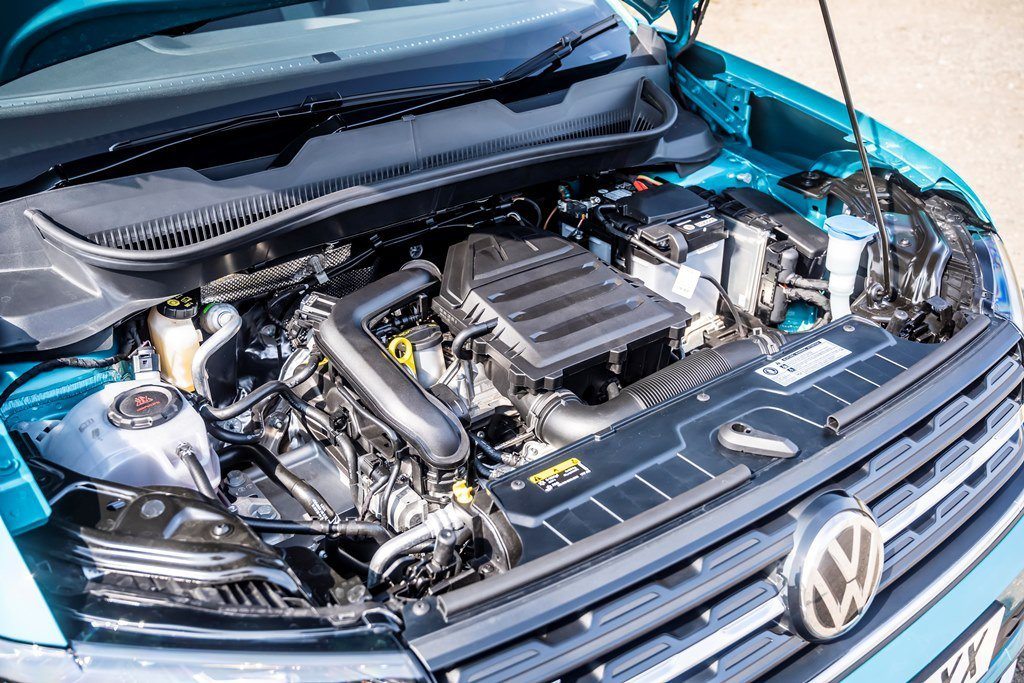 The 95hp TSI engine is only paired with a five-speed manual gearbox, but the gutsier 115hp TSI is available with a six-speed manual or a seven-speed DSG automatic.

There was no word at this week’s launch event about a plug-in hybrid variant coming to the UK, but a T-Cross PHEV is surely to be in the pipeline. On the all-electric front, Volkswagen is keen to promote its forthcoming standalone I.D. range of five fully electric models that will include a production version of the I.D. Crozz concept SUV expected in 2020. 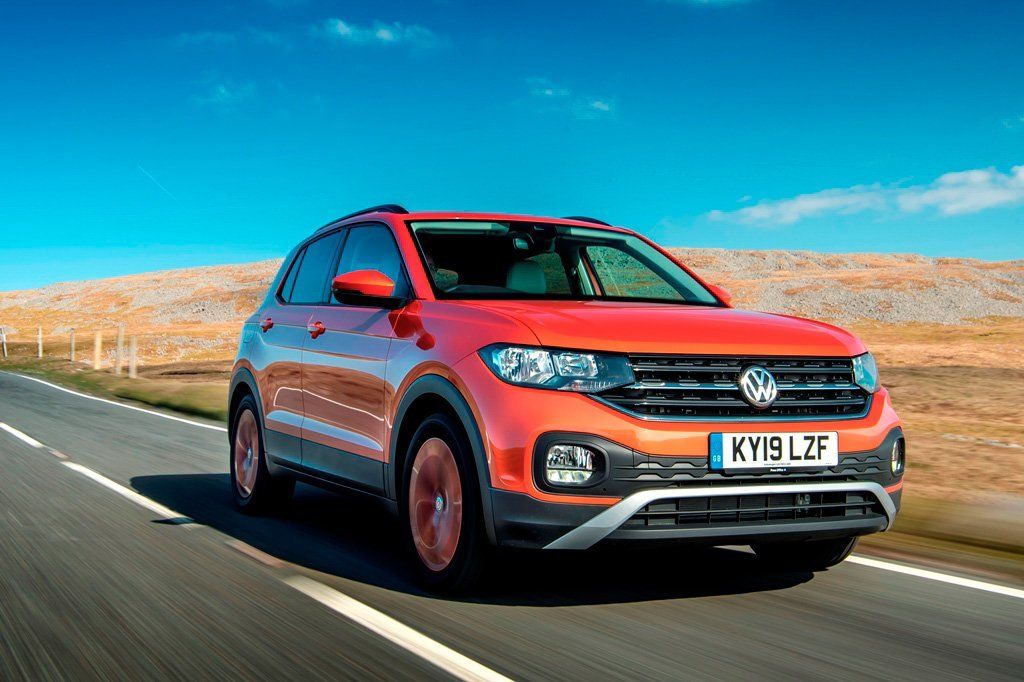 As you might expect from a compact SUV, the T-Cross is quite fun to drive. The light steering works well with the peppy nature and of the turbocharged three-pot petrol engine and it’s very easy to manoeuvre in tighter confines, or when parking, thanks to speed-sensitive steering that requires less effort at low speeds.

That the T-Cross is only available with front-wheel drive won’t bother many buyers and out of town the T-Cross is very composed at cruising speeds. Because it rides higher than the sharp-handling Polo on which it’s based, due to the slightly increased ride height, this allows the T-Cross to lean in the corners, whilst the body may be leaning the chassis stays composed and predicable. 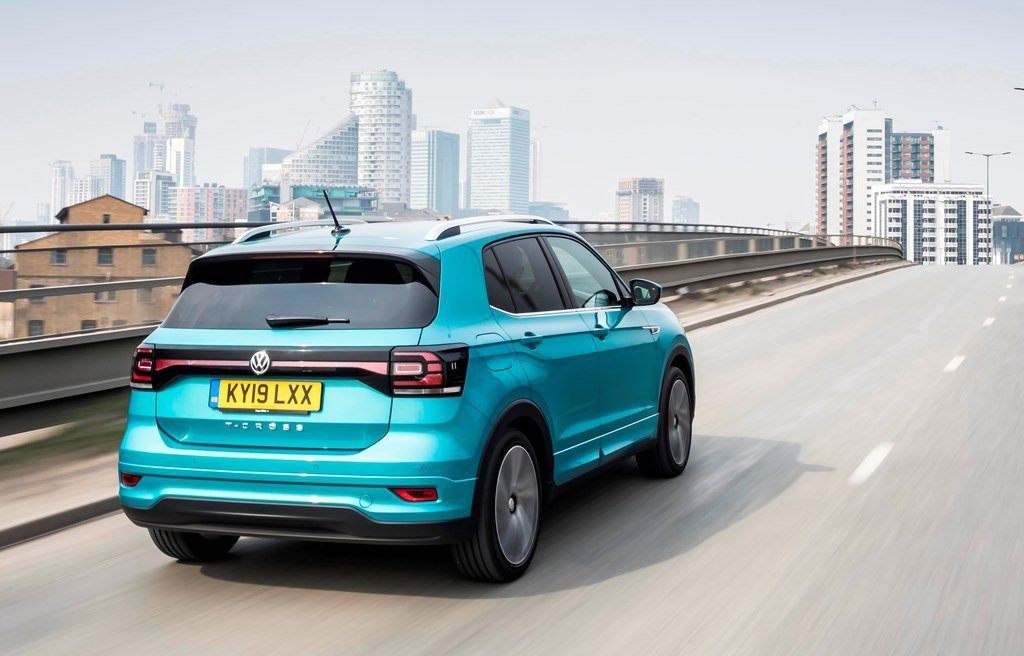 As you increase the speed, the well-weighted steering feels good and provides accurate feedback. Poorer road surfaces are well absorbed by the excellent suspension setup and the larger wheels on the R-Line as tested don’t massively detract from the overall ride comfort as is often the case.

Crash-test safety gurus Euro NCAP have yet to render to scrap any of the T-Cross variants, but given its shared underpinnings with the Polo, it would be safe to expect the same five-star safety rating acquired by its smaller stablemate 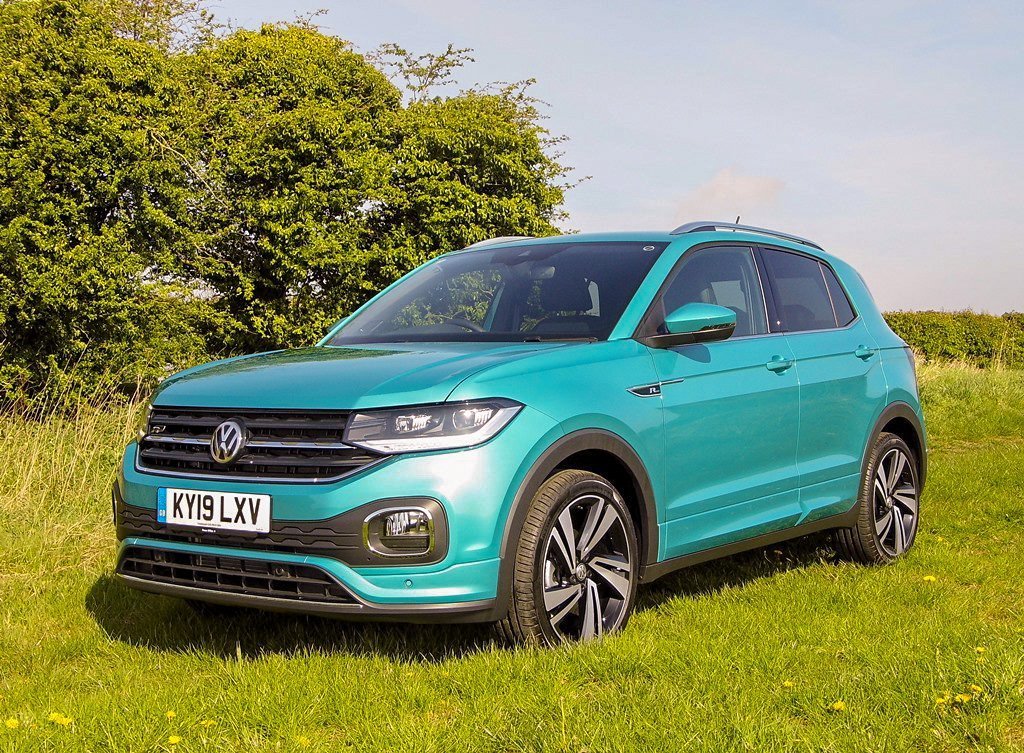 As there is no four-wheel drive system on any T-Cross model, it would be a good idea during the colder months to invest in a set of winter tyres for enhanced traction. 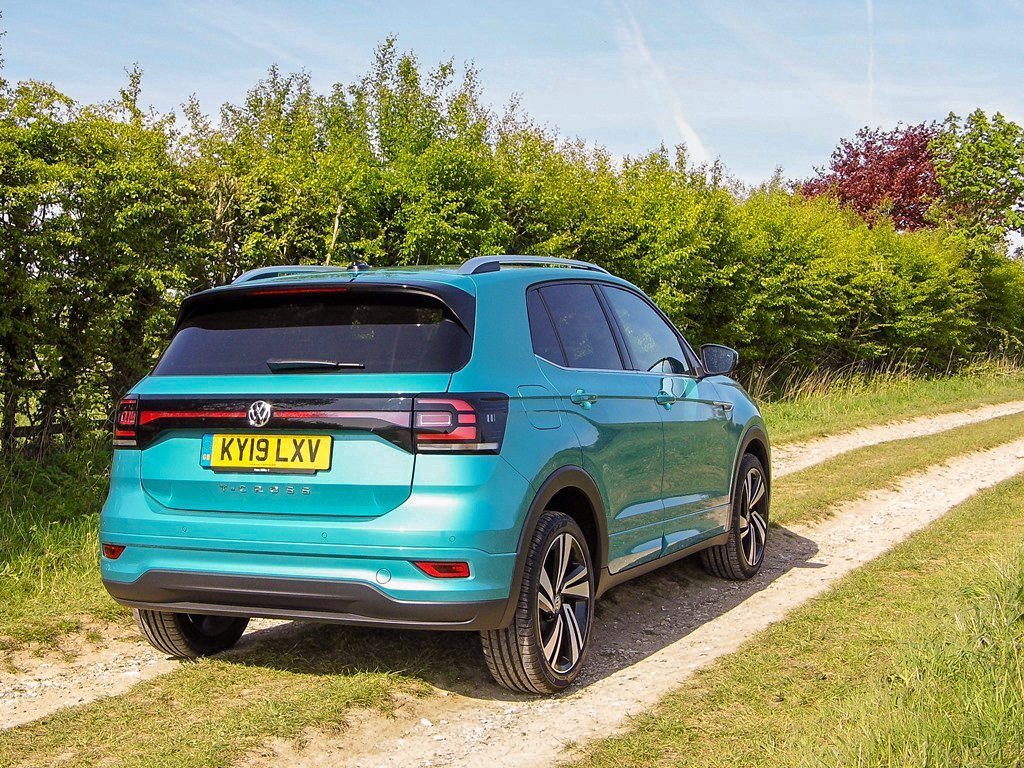 The five-door T-Cross is VW’s latest SUV. As an urban and country all-rounder, it dots more i’s and crosses more t’s than the majority of its two-wheel drive rivals and is available in four generously equipped trim levels across an eight-model range.

Despite its compact dimensions, the T-Cross is big on style and customisation, bang on trend and has a deceptively spacious cabin. As you would expect of VW, it drives exceptionally well and is loaded to the gunwales with usable, everyday lifestyle tech. 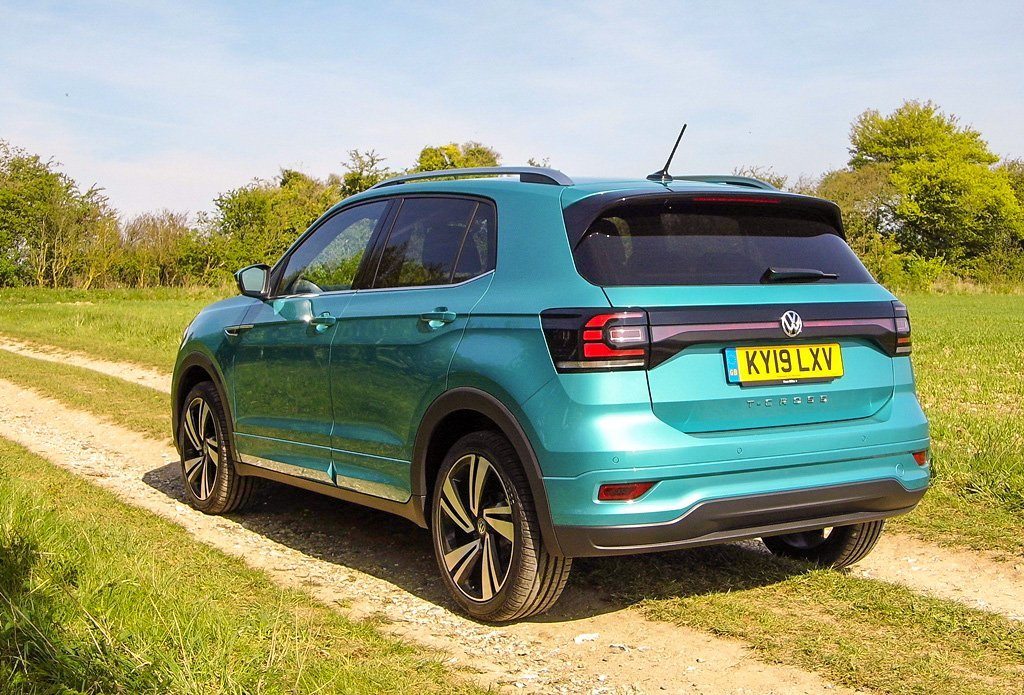