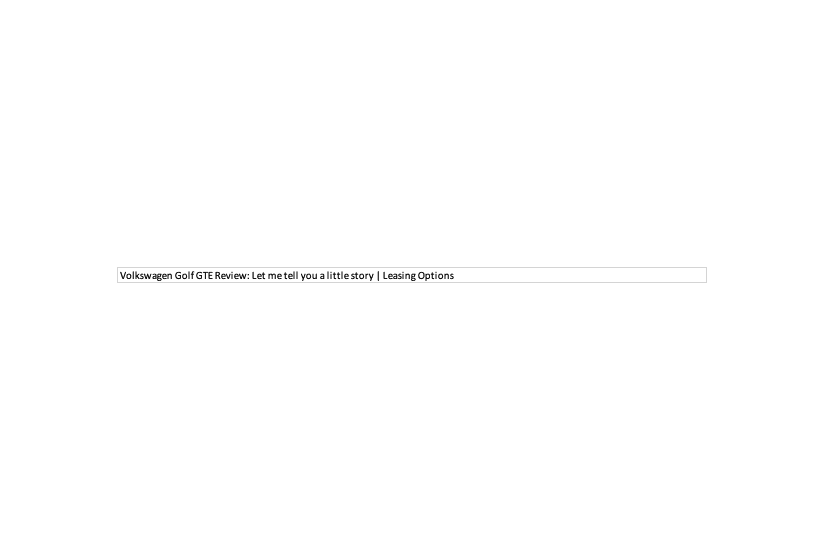 Volkswagen Golf GTE: Let me tell you a little story…

Plug-in hybrids are an integral part of our motoring future and, to an increasing degree, our present. The new breed of plug-in hybrids such as the Hyundai Ioniq, KIA Niro and BMWs i3REx started their lives intending to BE a PHEV, whereas class competitors such as the VW Golf GTE, Passat GTE and Mercedes-Benz CC350e were not.

For the latter, the respective brand engineers had to adapt conventional fossil fuel-based platforms to accommodate modern hybrid technology, incurring significant chassis re-development costs – another reason why these PHEV catch-up models are so expensive when compared to conceptualised PHEVs. 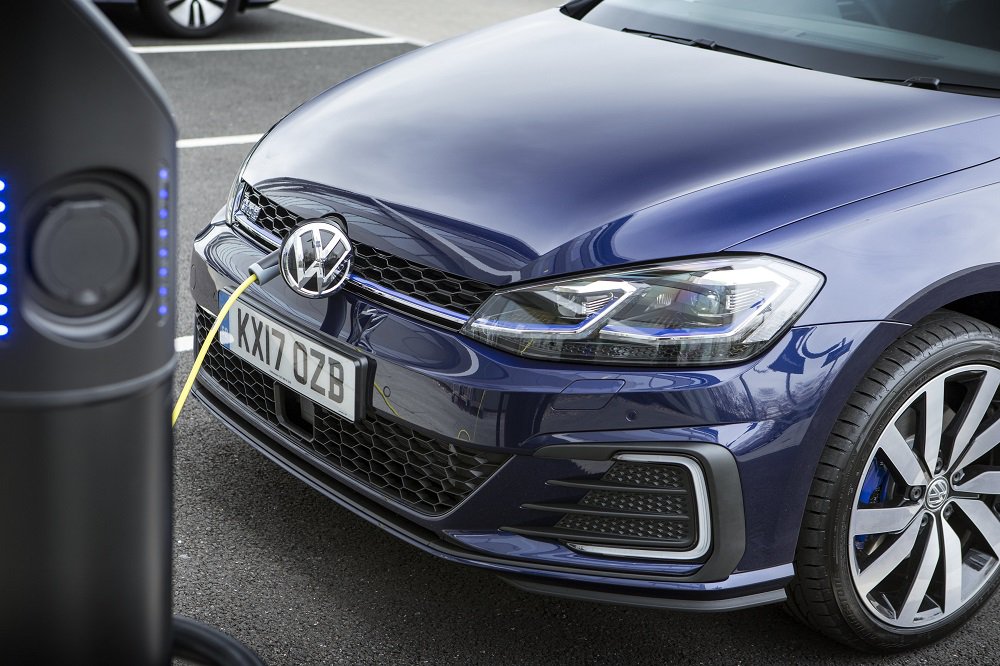 The standard Golf is pretty much all the car you'll ever need. It's spacious, comfortable, well-built, reasonably priced and – as at the end of 2017 – is the best-selling car in its class and second most popular overall with UK buyers.

The Volkswagen Golf GTE rides high on that wave of success. It is a plug-in hybrid version of the Golf hatchback and was first revealed at the 2014 Geneva Motor Show. It shares the same basic powertrain hardware with the Passat GTE and Audi A3 Sportback e-tron and offers the excellence from the UK’s best-selling hatch without the range anxiety of the electric-only e-Golf. 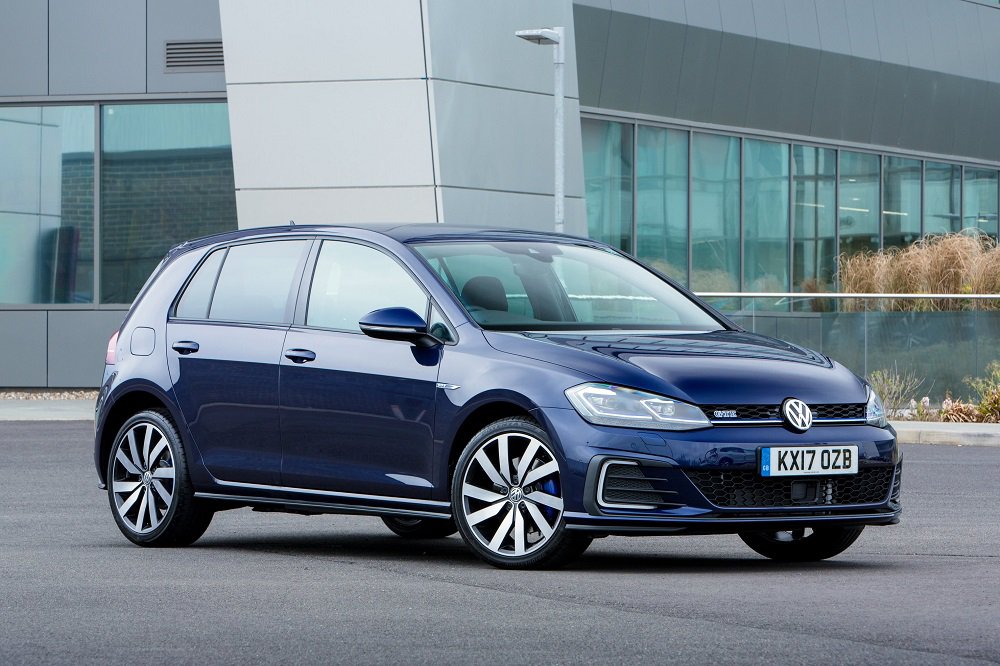 The Mk7 Golf was given a refresh last year which included LED head and tail lights plus mildly tweaking the front end styling. The GTE was included in that revamp, but is marked out by number of blue motifs carried in the badges and headlamps and there’s a thin blue line on the grille – a styling touch it shares with the fully-electric version. Oddly, the GTE is only available as a five-door hatch and not as an estate, which would offer more family-oriented practicality.

Its bullish, purposeful stance, rear spoiler and deep front bumper mean the GTE looks every bit the typical hot hatch. Like the GTI, the grille also features a new honeycomb-shaped design as Volkswagen wants you to know that the GTE is designed to be both an eco-model and a hot performance hatch at the same time. It is and it isn’t, but more on that later. 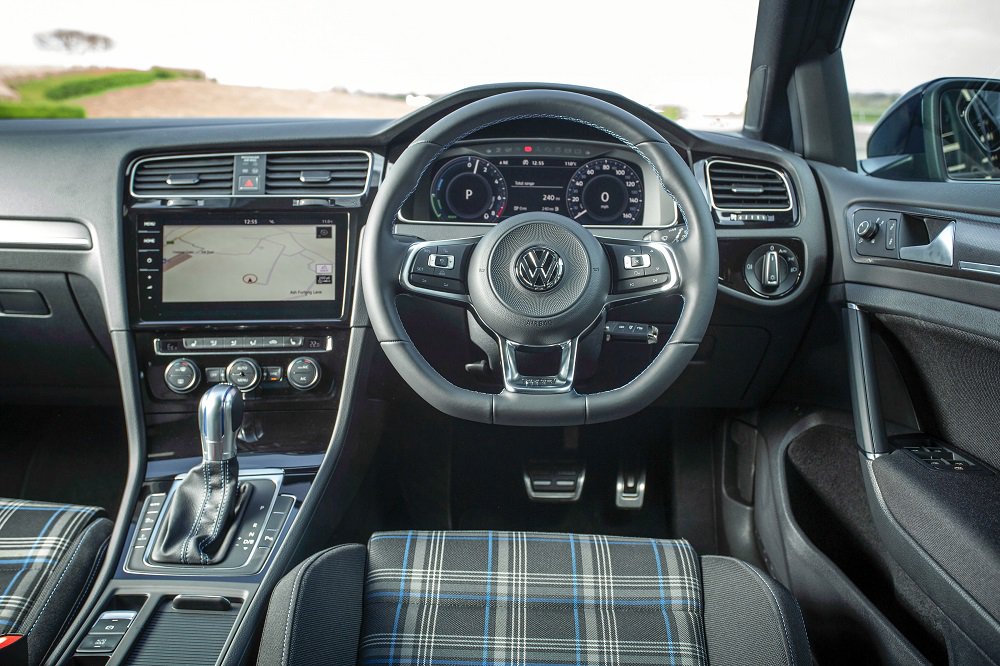 The first thing you notice inside the Golf GTE is the colour. Whereas the GTI traditionally has a red trim highlights on its exterior, followed up with a red-themed interior – so does the GTE…but this time it’s blue – even down to the blue tartan seats. Corny, but it works.

Interior updates most notably include the touch screen that controls the sat nav, audio and the entertaining graphics that show you how much energy you’re using and generating. Otherwise, everything inside is ‘as you were’ Mk7 Golf. There's plenty of headroom and legroom in the front, but the rear is slightly compromised, especially if you’re behind a taller driver.

The boot is okay but not as capacious as a standard Golf. Adding a hefty amount of battery tech under the GTE’s boot floor has an impact on space, so the boot capacity drops by more than 100 litres over the standard hatch to just 272 litres (see what I mean about a GTE estate?). Despite this, the boot is an even shape and the seats fold almost flat to give a reasonable overall capacity of 1,162 litres. 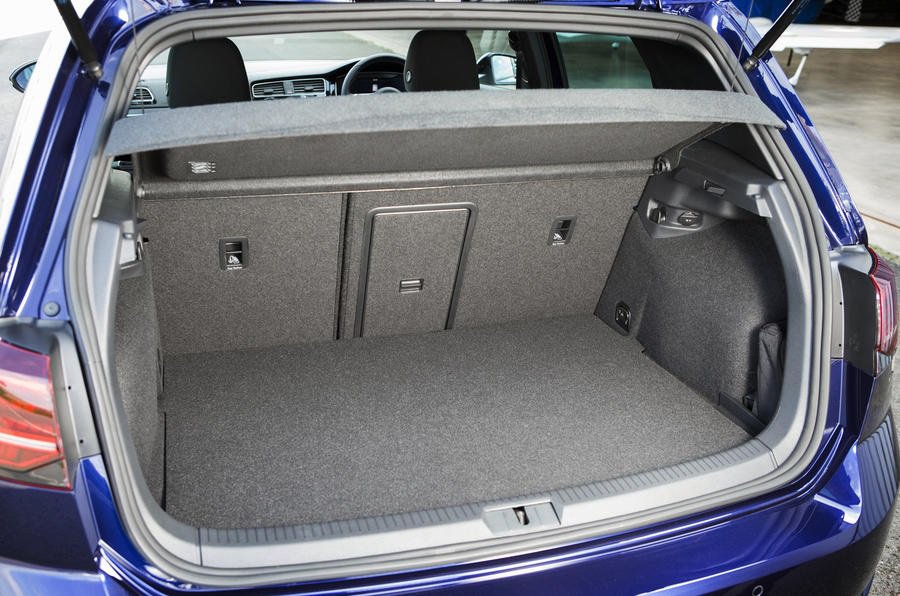 The GTE Advance – which mirrors that available on the Passat GTE – includes further goodies such as 18-inch alloys, an updated Discover navigation system, a Winter Pack including heated seats, privacy glass, a front centre armrest and exterior e-sound. 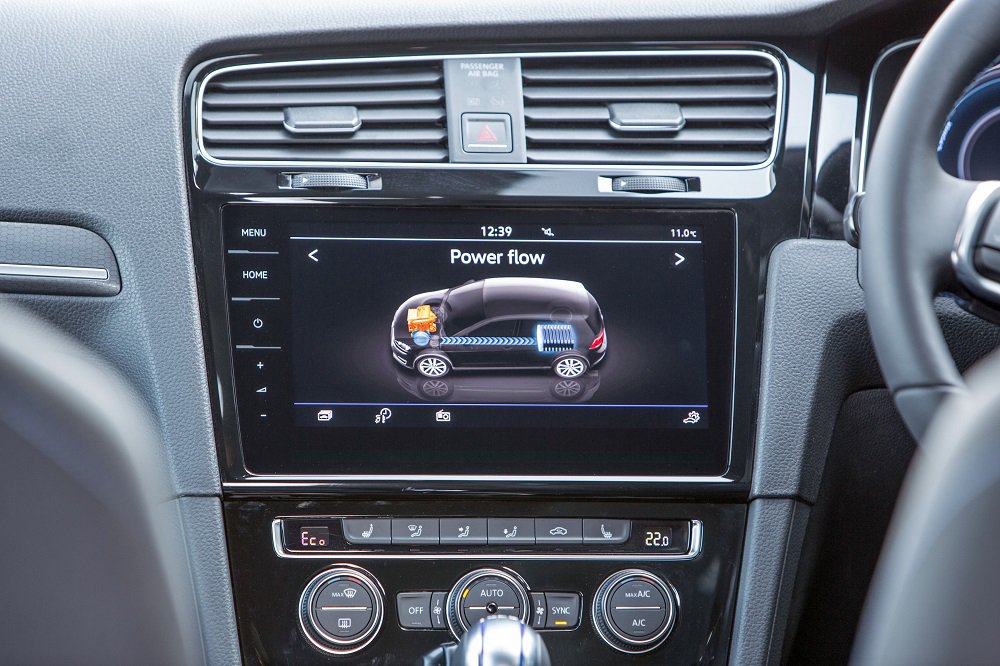 Powered by a turbocharged 1.4-litre, 148bhp TSI petrol engine coupled to a 75kW/99bhp electric motor powered by an 8.8kWh lithium-ion battery, the total available power and torque equates to 201bhp / 305Nm, delivered to the front axle like a normal Golf. CO2 emissions are 38g/km for the GTE and 40g/km for the GTE Advance, while combined fuel economies are 166mpg and 157mpg, respectively.

For those that do lots of short, urban trips and want to avoid running on petrol alone, charging the battery doesn’t take too long, thankfully – a little over three and a half hours from a standard wall socket and two and a quarter hours via a wall box – which can be done overnight at home or perhaps at the office during the day.

Put the GTE in all-electric mode and it can reach up to 81mph, but repeat it too often and the electric power will drain very quickly. Push the GTE button and the performance improves dramatically as both the petrol and electric motors combine for maximum power output. 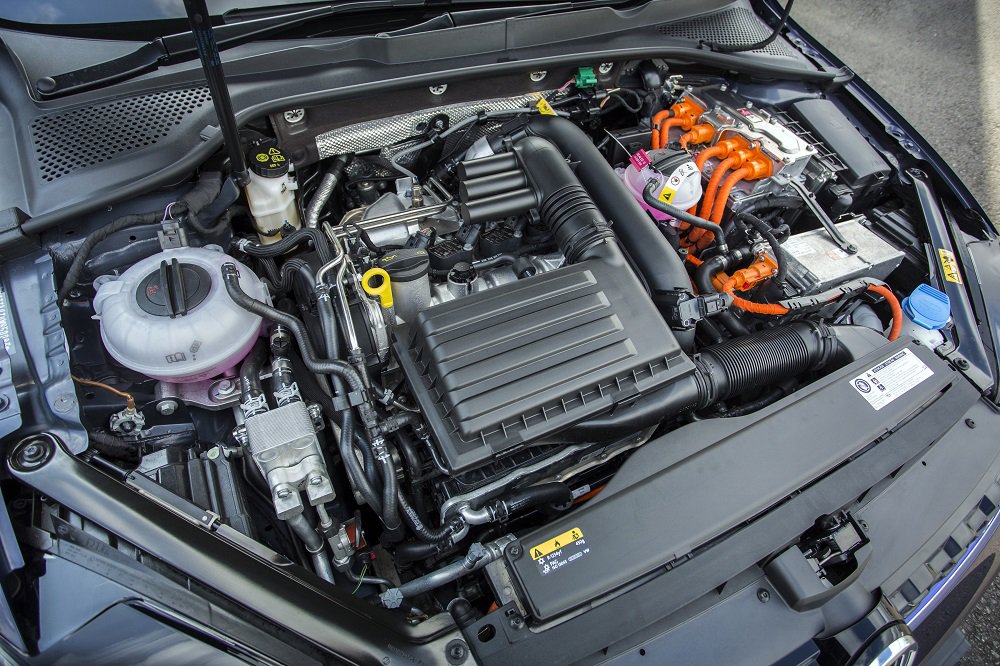 Range-wise, running in electric-only mode you can expect to travel around 30 miles, which is adequate considering most of the UK lives within 10 miles of their workplace. However, collectively with the petrol engine a range of around 520 miles should be achievable. On paper, it all sounds rather impressive and, to a point it is.

However, even using the GTE mode doesn't transform the car into a B-road king. The 1.4-litre engine doesn't have quite enough character to it, while the 6-speed DSG gearbox can be a little sluggish in full auto mode. Gratitude should at least be extended for there being no whiny CVT ‘gearbox’, unlike some rivals.

The car is surprisingly nippy in a straight line, returning 7.6 seconds to 62mph from a dead start. Such instant acceleration is largely thanks to the electric motor (integrated into the gearbox housing) and could leave a number of so-called supercars wondering what just happened. 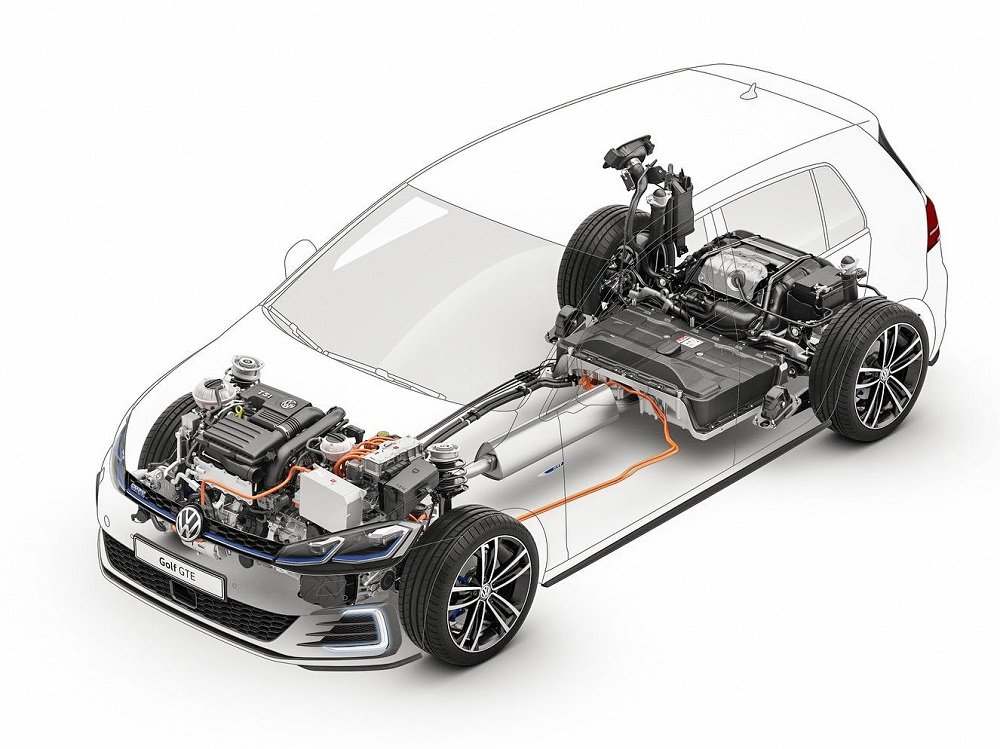 When a Volkswagen wears a GT badge, it comes with the promise of looking great and delivering an almost iconic degree of sporty performance. This is mostly true with the GTE, which enjoys the handsome looks of the updated Mk7 Golf. It has sharp steering, is comfortable and offers a reasonable ride.

However, the GTE falls short of the dynamic agility enjoyed with the GTI – or any other Golf for that matter. Thanks to those lithium-ion batteries, the GTE tips the scales at 1,615kg unladen, which is 277kg more than the standard 1.4-litre TSI Golf. To put that in perspective, that’s TWO Anthony Joshua’s sitting in the car – all the time.

Such additional weight called for a slightly firmer suspension setup, which means the ride isn’t quite as pliant as on conventionally-fuelled Golfs. However, the GTE is very refined and quiet and never feels short of power, which makes it relaxing on motorways or when you need to execute a brisk overtake on country roads. 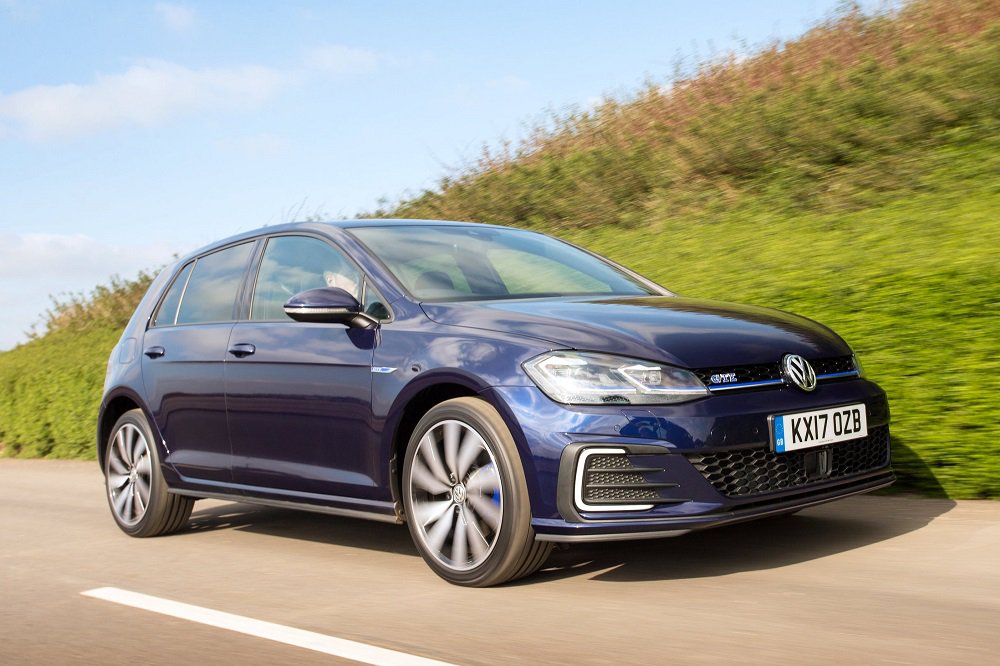 The Golf GTE starts at just over £33,000, but a £2,500 government grant is currently available to buyers of ultra-low-emissions vehicles, which takes some of the sting out of the high list price. With cars of this nature, leasing is probably the best route to parking one on your drive.

The first thing to note is that alterations to the UK’s Vehicle Excise Duty (VED) system in early 2017 negated the tax-exempt status that the GTE previously enjoyed. It now costs £130 a year to tax, but its low CO2 emissions are still a big incentive for company-car drivers, as they bring its Benefit-in-Kind (BiK) bracket down to 8 per cent. Private owners will also find the GTE’s claimed fuel economy rather appealing. It’s also exempt from the London Congestion Charge, should you use the car in the capital.

As is often the case with hybrids, those headline economy figures are difficult to achieve in real-word driving. Unless you charge the car every day and always drive with efficiency in mind, you won’t get close to the claimed 166mpg. Plus, the claimed all-electric range of 30 miles will be affected by your driving style, traffic conditions and possibly even the weather, especially when cold. Despite these limitations, the Golf GTE should still be markedly cheaper to run than the average hatchback. 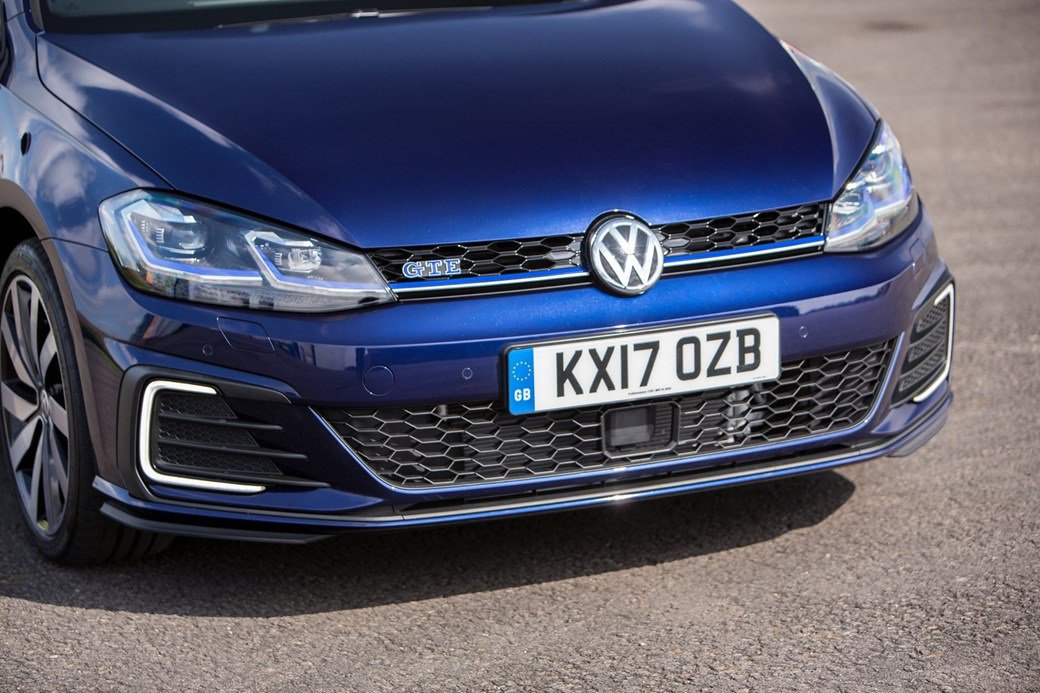 The Volkswagen Golf was last crash-tested by Euro NCAP back as 2012, where it achieved the full five-star rating. However, at that time the testing regime wasn’t as strict or gruelling as it is today. Still, it is comforting to know that the current GTE has a host of latter-day safety features including autonomous emergency braking, electronic stability control, an XDS+ electronic differential (which improves grip in corners), curtain airbags, a driver's knee airbag, front-seat side-impact airbags, adaptive cruise control, a driver-alert system and automatic post-collision braking. 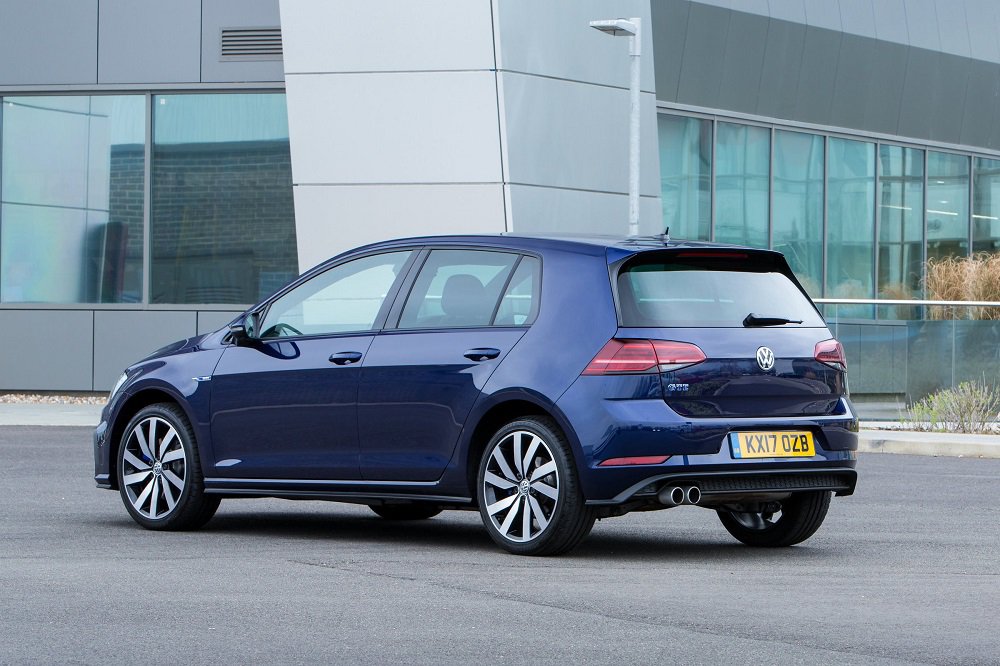 The Volkswagen Golf GTE is a capable, all-round family hatchback which delivers decent performance when asked, impresses on economy and is solidly made. In addition, you get most of the goodness found in its more common stablemate.

The GTE has proven so popular here that Volkswagen’s UK website currently advises that “due to unprecedented demand, leading to long delivery lead times, we are temporarily closing orders for the Golf GTE.” VW says they expect to re-open GTE orders as soon as possible in the coming weeks.

Now, THAT’S a story. Perhaps I should have started with that.

The new Mk8 Volkswagen Golf GTD will be revealed at the forthcoming 20...

Specifications have been released for the KIA XCeed and Ceed Sportswag...