During the past forty years, the Volkswagen Golf has become a familiar part of the UK motoring landscape since first arriving in the mid-1970s. Through seven generations, the VW Golf has acquired a strong reputation for engineering strength and quality and remains among the most desirable family hatchbacks available today.

Against strong rivals like the new and very much improved Hyundai i30, Ford’s evergreen Focus and Vauxhall’s omnipresent Astra–to name just a few–the family hatchback class has never been busier or more closely matched. To quell the quickening surge from its rivals, Volkswagen stays a half-step ahead by keeping the Golf up to date and on-trend. For its 2017 model year, the VW Golf has received a broad range of updates. Styling revisions see every Golf model receiving new bumpers and lights on the outside and a new eight-inch ‘Discover’ colour infotainment screen, with a range-topping 9.2-inch ‘Discover Pro’ system optional which offers high-resolution graphics and gesture recognition for hands-free operation.

Fortunately, the 2017 Golf carries over all the old favourites as well, including the high-performance Golf GTD diesel model–the subject of our test drive this week.

Now most easily identified by its standard all-LED rear lights, the latest Golf remains a handsome car, with unfussy styling that has evolved gradually over the years. Today’s Golf has a sharp-looking front bumper and grille style, with all-LED headlamps now an option. 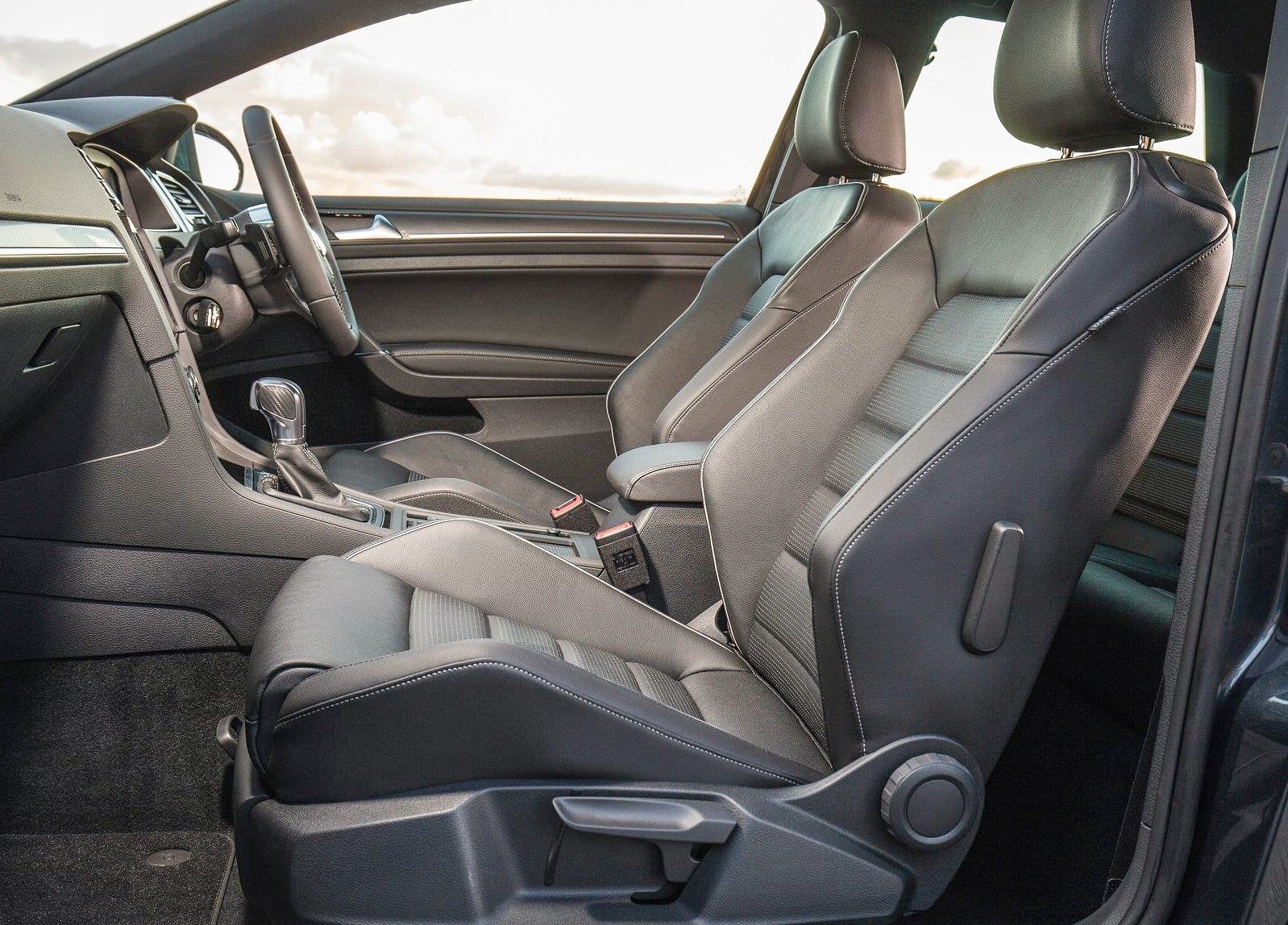 Open the well-weighted door and climb inside the GTD and you quickly realise that it’s the interior that really impresses, with first-rate materials and a neat, organised feel to the layout. There’s an almost clinical feeling of Germanic quality and the amount of standard equipment will impress, too. The first noticeable thing is the lack of conventional analogue instruments on the GTD. These have remained in the VW parts bin in favour of a 12.3-inch ‘active info display’, which can be personalised to show various combinations of information, including a 3D colour navigation map. It’s crisp, clear, easy to use and great to look at, bringing a high-tech feel to the dashboard.

With the GTD, interior space is exactly the same as any regular Golf. There’s a good-sized 380-litre boot and plenty of room to carry grownups in the back. The GTi is only available as a hatch, but the GTD covers more practicality bases with an estate version which increases boot space to 605 litres, or 1,620 litres when the rear seats are folded down. 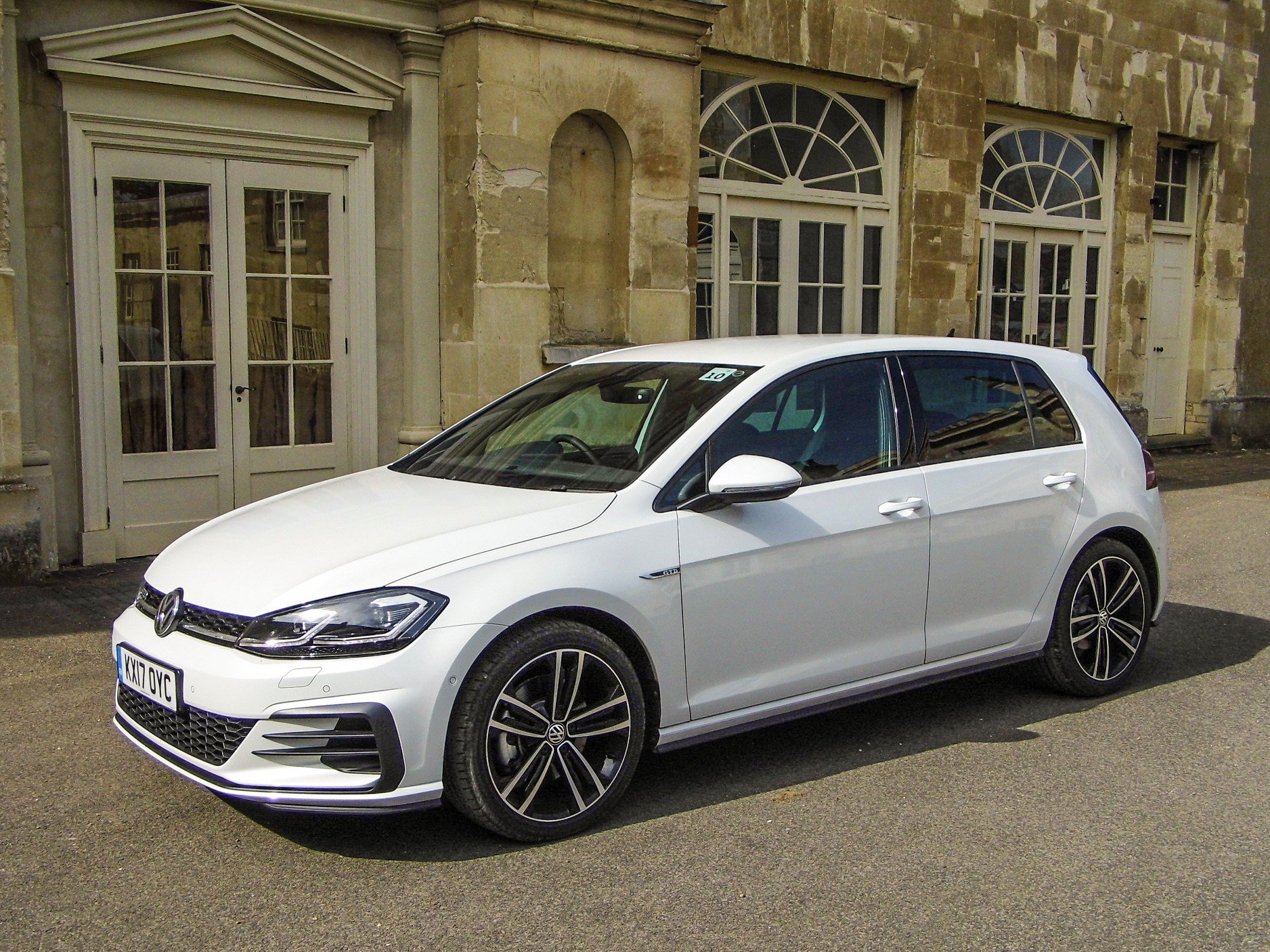 Like the petrol-driven GTi, the GTD is positioned towards the top of the Golf range and has loads of standard equipment. Keyless entry, sat nav, and parking sensors are also standard. To be honest, there’s plenty enough kit on the standard GTD to pretty much avoid the options list altogether–with perhaps one exception; tick the box marked ‘Dynamic Chassis Control’ which offers three-stage adaptive dampers to stiffen or soften the suspension, and make a great handling car handle even better. The 181bhp 2.0-litre turbocharged diesel engine shoves the standing GTD to 62mph in 7.4 seconds and tops out at an unrestricted 144mph.

It’s a very impressive engine which offers plenty of overtaking ability thanks to the way it delivers its power. It feels relaxed around town–especially if you choose the new seven-speed DSG automatic gearbox. The way the engine delivers that 181bhp is remarkably smooth.

Smart electronic wizardry in the front axle mean that power is always sent to the wheel with the most grip, which means the car can make the most of its delightfully responsive steering.

The clever chaps at Volkswagen wouldn’t have given their most powerful Golf diesel model a GT badge if it didn’t offer similar driving thrills to the petrol-engined VW Golf GTi–it’s fast, fun and surprisingly comfortable. The diesel engine has been tuned to make the audio track as appealing as possible and here too, it doesn’t disappoint. Mind you, it doesn’t sound quite as redolent as the petrol GTi. The GTD is engineered to deliver fast, engaging but relatively relaxed progress, but with a slightly weightier lump under the bonnet, means it’s isn’t quite as focused as the petrol-powered GTi.

However, the combination of 7.4 seconds to 62mph and claimed 60.4mpg fuel economy render the GTD a car to live with day to day and is likely to more than make up for any shortcomings in cornering prowess, perceived or imaginary.

The expanse of talent from the GTD can be exploited by the aforementioned optional Dynamic Chassis Control, which brings a choice of Comfort, Normal and Sport suspension settings. There is a tangible difference between the characters of Comfort and Sport, provoked by changes to engine response and the audio note in addition to the increasing firmness of the suspension.

The laid-back nature of Comfort also suits the optional DSG automatic gearbox, which now features seven ratios instead of six, helping it to use less fuel. However, if you are a more enthusiastic driver, the six-speed manual gearbox provides greater involvement. With seven and a half generations under its belt, safety is another strong point for the 2017 Golf–and the GTD is no different. It benefits from a five-star Euro NCAP crash-test rating which realised 94% for adult occupant protection, 89% for child occupants and 65% for pedestrians.

Those five stars were earned largely via the car’s seven airbags, electronic stability control and an automatic post-collision braking system, which stops the car after an impact to prevent a secondary collision.

The GTD also has autonomous emergency braking to prevent low-speed impacts, adaptive cruise control that maintains a safe distance between you and the car in front, and a driver fatigue sensor, which monitors exhaled carbon dioxide levels and warns if it deems you’re nodding off at the wheel. With the current ill-educated onslaught against diesel-powered cars by those in perceived authority who really should know better, the notion of a diesel hot hatch is surely on stolen time. But the Golf GTD does such a decent job that it’s difficult to find any fault with it that could scupper a deal.

Sure it’s pricey–it’s the nature of the hot hatch beast. You may not get the raw brutality of the GTi, but you do get greater flexibility in everyday use. And goodness me, it’s still mighty quick!

Its multiple characters deliver exhilarating fun on a B-road as well as trundling up and down motorways at a brisk pace. Low CO2 emissions of 125g/km also make it an appealing company car choice for the keen driver, too.

Golf gets an upgrade

Volkswagens most successful vehicle is to be updated with loads of new...

Can the plug-in hybrid version of VW's all conquering Golf live up to...