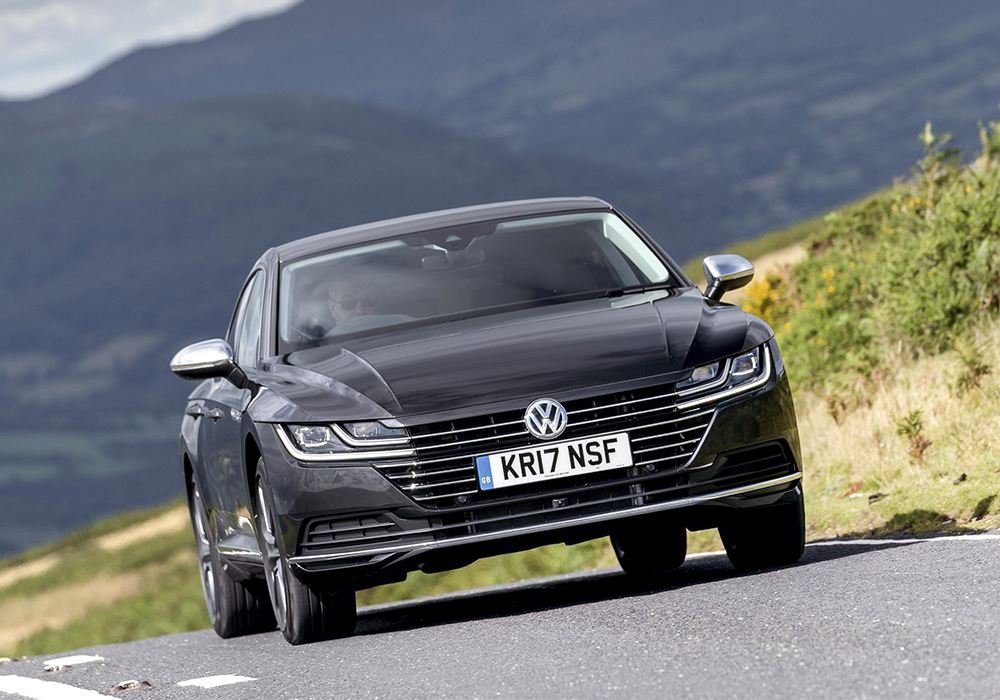 Volkswagen Arteon Review: can it upset its Germanic rivals?

Volkswagen describes the Arteon as an ‘avant-garde gran turismo’, which is essentially marketing speak for a coupé-like hatchback. At a recent media event, Volkswagen was quick to point out that the Arteon is an all-new flagship product, rather than a Passat coupe or a replacement for the now-defunct CC. Its purpose is to elevate VW to ‘new heights’.

In the absence of any further possible elevation on VW’s non-premium tree, many would interpret ‘new heights’ to read ‘premium’ and in so doing, the Arteon directly targets proper premium-badged rivals such as the Audi A5 Sportback, BMW 4-Series Gran Coupé and the Merc CLS Coupé.

Those rivals have a stronger and more aspirational image than the Volkswagen, which is, by comparison, just not as desirable. That said, Volkswagen has given the Arteon a captivating design complete with a spacious and comfortable interior replete with technology and innovation. 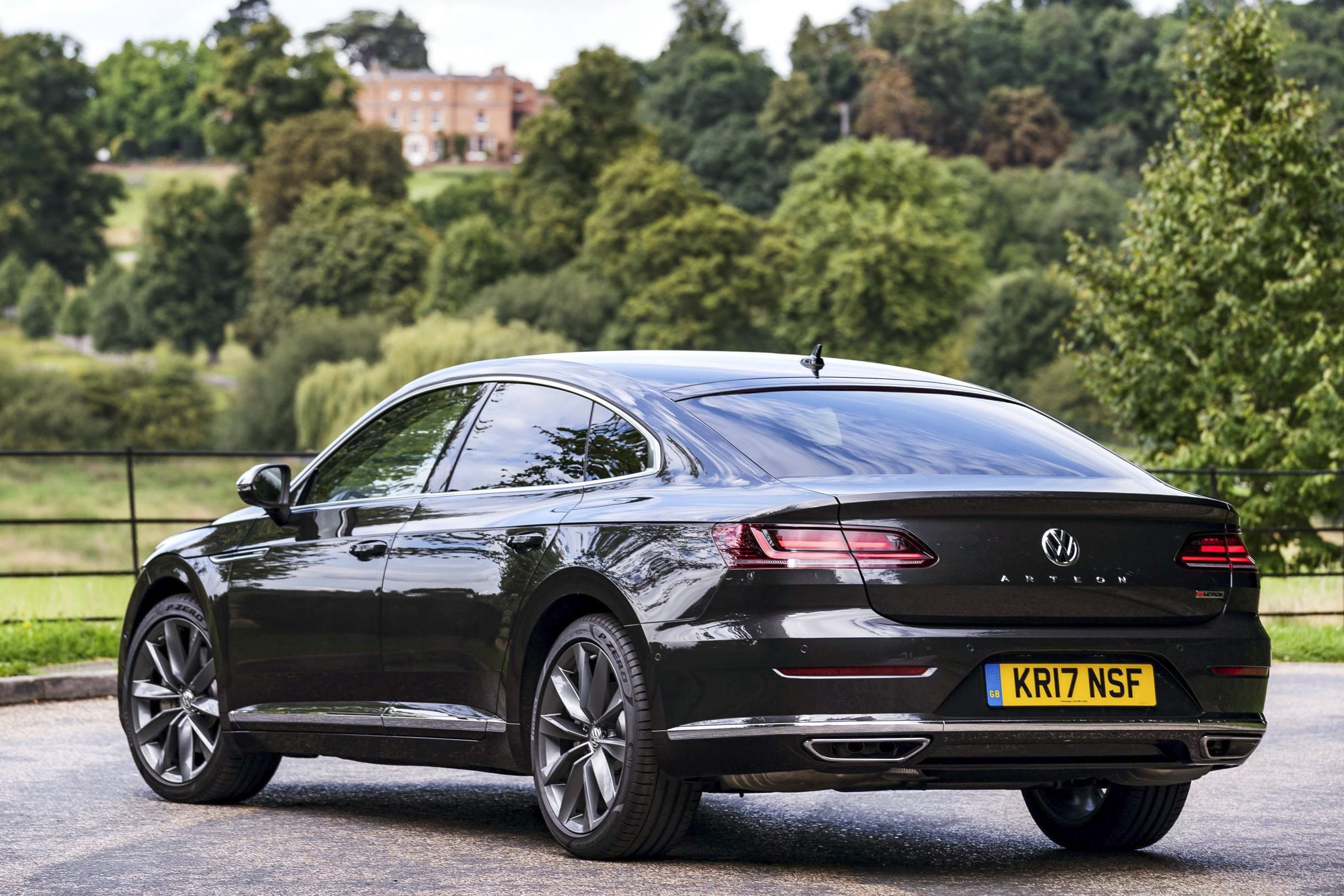 Volkswagen’s head of design Klaus Bischoff says the Arteon is a start of a new era of design and future VW models will borrow heavily from the Arteon’s bullish facial expression.

Everything about the Arteon says confidence and style. The new model’s stooping nose features LED daytime running lights that flow from the headlights into a large, bold-looking grille that extends low down into the bumper. The sloping bonnet and wings are similarly striking and feature bold lines and creases that run along the car’s flanks culminating in beefy-looking wheel arches.

The Arteon rides on the same flexible MQB platform used by VW Group models that include the current Golf, Tiguan, Audi Q2 and the forthcoming VW T-Roc. It has enabled the Arteon to be 60mm longer, 16mm wider and 10mm taller than the Passat CC and comfortably longer than both BMW’s 4 Series Gran Coupé and the new Audi A5 Sportback. In true VW fashion and in direct contrast to its stylish exterior, the interior is rather conservatively styled. All controls are well placed and everything works very well. A design concession is the full-length ventilation duct, obviously inspired by the car’s striking-looking grille. Only the analogue clock and a cluster of controls break it up.

The MQB platform allows the Arteon a generous wheelbase of 2,837mm and the comfortable carrying of five adults who will also enjoy best-in-class legroom. Luggage space is 563 litres with the rear seats in place, rising to 1,557 litres when the 60/40 split rear seats are folded. Available only in two trim levels – Elegance and R-Line – the Arteon comes packed with a comprehensive line-up of the latest infotainment, connectivity, and assistance systems and represents the jewel in Volkswagen's technological crown.

A big plus is Volkswagen’s ‘active info’ display, which can be configured to show a wealth of information options – essential given the number of high-end driver-assistance systems on offer. Depending on how many boxes you tick on the order form, there’s active cruise control (which can use navigation data to slow the car for corners or speed-limit changes), active lighting (which can illuminate corners before you reach them) and a system to safely bring the car to a halt if you become incapacitated at the wheel. 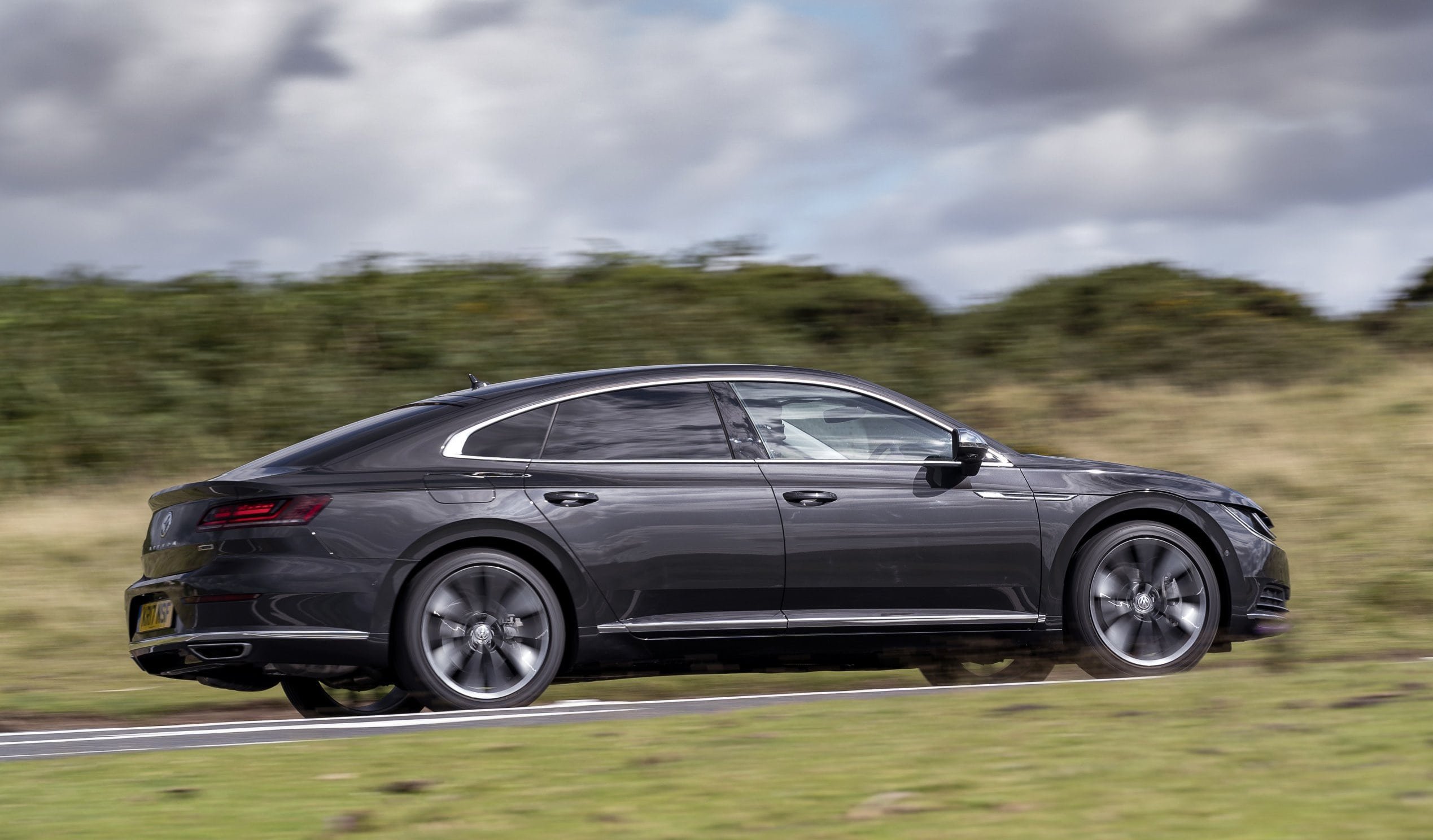 In the UK, the Arteon offers a range of petrol and diesel engines from which to choose. Volkswagen UK predicts that diesels will be the biggest seller, so let’s start with those.

Actually, it’s one 2.0-litre four-cylinder turbo-charged diesel engine offered in three states of tune; 148bhp/340Nm, 187bhp/400Nm and twin-turbo 236bhp/500Nm. Flat out, the 148bhp unit isn’t particularly brisk, but it delivers good mid-range poke to easily build speed on motorways without the need to change down all the time. For most people, that should do the job quite nicely.

If you need more acceleration, then try the 187bhp or 236 versions – that’s enough to whisk you from 0-62mph in just 6.5sec. That’s genuinely quick, but it’s the effortless manner in which it carries you along using just the mid-range punch that’s particularly impressive.

If you’re not keen on a diesel and would prefer something smoother, then take a look at the petrol engines. These start with a four-cylinder 1.5-litre turbo which I haven’t yet driven in the Arteon, but have in the smaller, lighter Golf where it is very responsive and refined. However, given that the Arteon weighs a bit more than the Golf, you may want to opt for the 187bhp 2.0-litre turbocharged petrol instead and proved worthy in every respect. 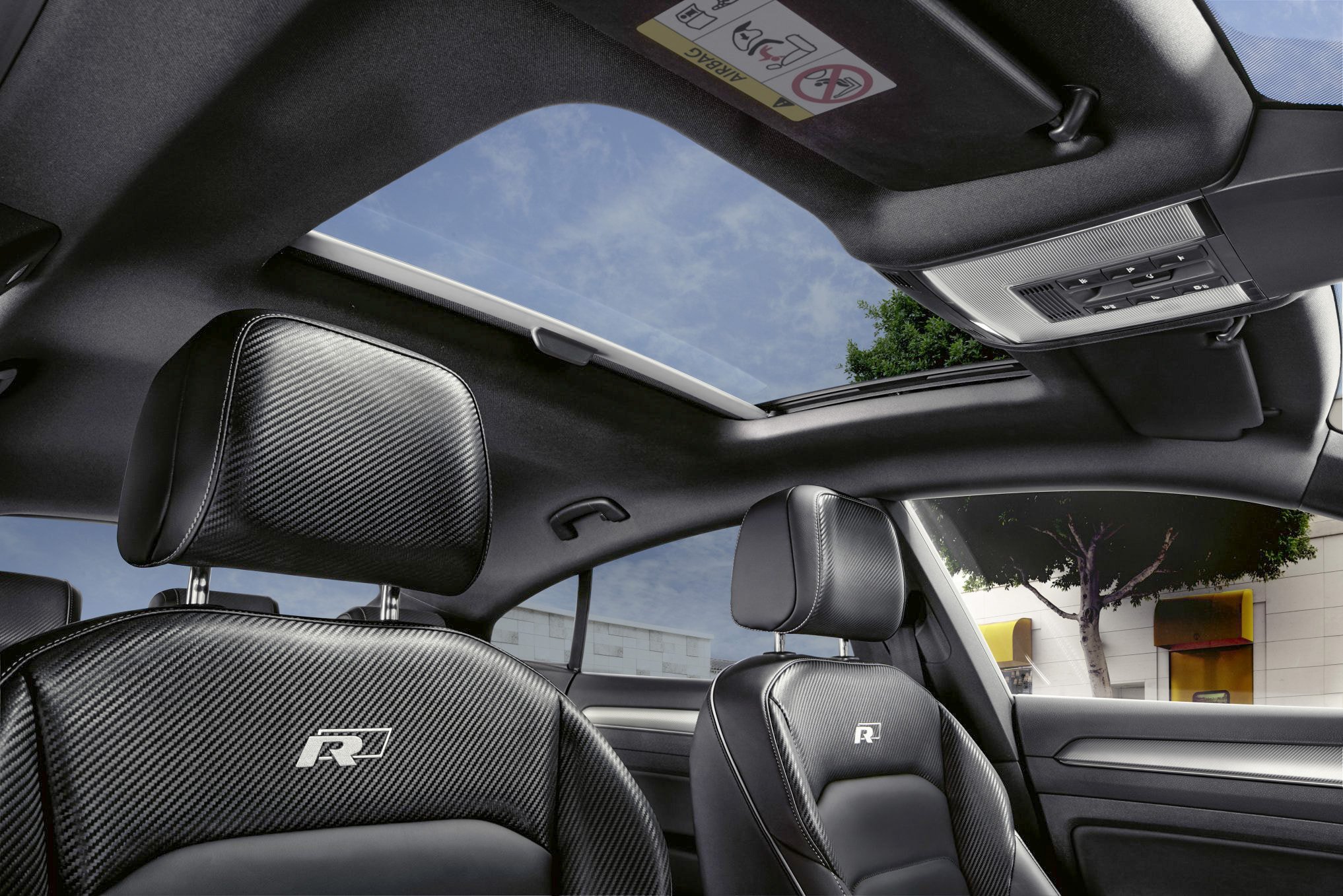 If you’re after (quite a bit) more oomph, this same 2.0-litre engine is available with two turbos kicking out a healthy 276bhp to be exact. It has a willing, revvy character and will propel you and yours to 62mph in only 5.6 seconds – now that’s properly fast.

Depending on which engine you choose, it’ll come with a six-speed manual gearbox or seven-speed DSG auto. The manual is smooth and light to use, while the auto 'box shifts slickly on the move but can be a tad lumpy at parking speeds.

In wet or slippery conditions, the front-wheel-drive versions can struggle for traction, so it’s worth considering VW’s 4Motion four-wheel drive that’s available either as an option or standard on the most powerful engines. Even on greasy roads, this gives terrific grip out of tight corners. The Arteon’s steering is well weighted and precise, if not as ‘feely’ as its Audi and BMW rivals. As standard, you get a variable steering rack that’s calmer at high speeds for better stability, but quicker around town for less arm twirling, which is a real boon when parking this large car in tight spots.

Marketed as VW’s sportier model, the Arteon receives tweaked suspension to make it much better planted through corners than the Passat, with lots of grip. Still, for keener drivers, it misses out on the playfulness of the best rear-wheel-drive rivals, such as the 4 Series or Jaguar XE.

The Arteon rides pretty well both at motorway speeds and around town. Sharper potholes and ridges hit at speed are the only things that catch it out and cause it to thump. On the motorway, you hear a fair amount of road noise, but wind noise at a steady 70mph is well muted.

Unfortunately, the non-availability of a higher cylinder count for the Arteon and the sonic pleasure it brings is a disappointment. Two or more additional cylinders – available from its rivals – would heighten the driving enjoyment and enrich the ownership experience. 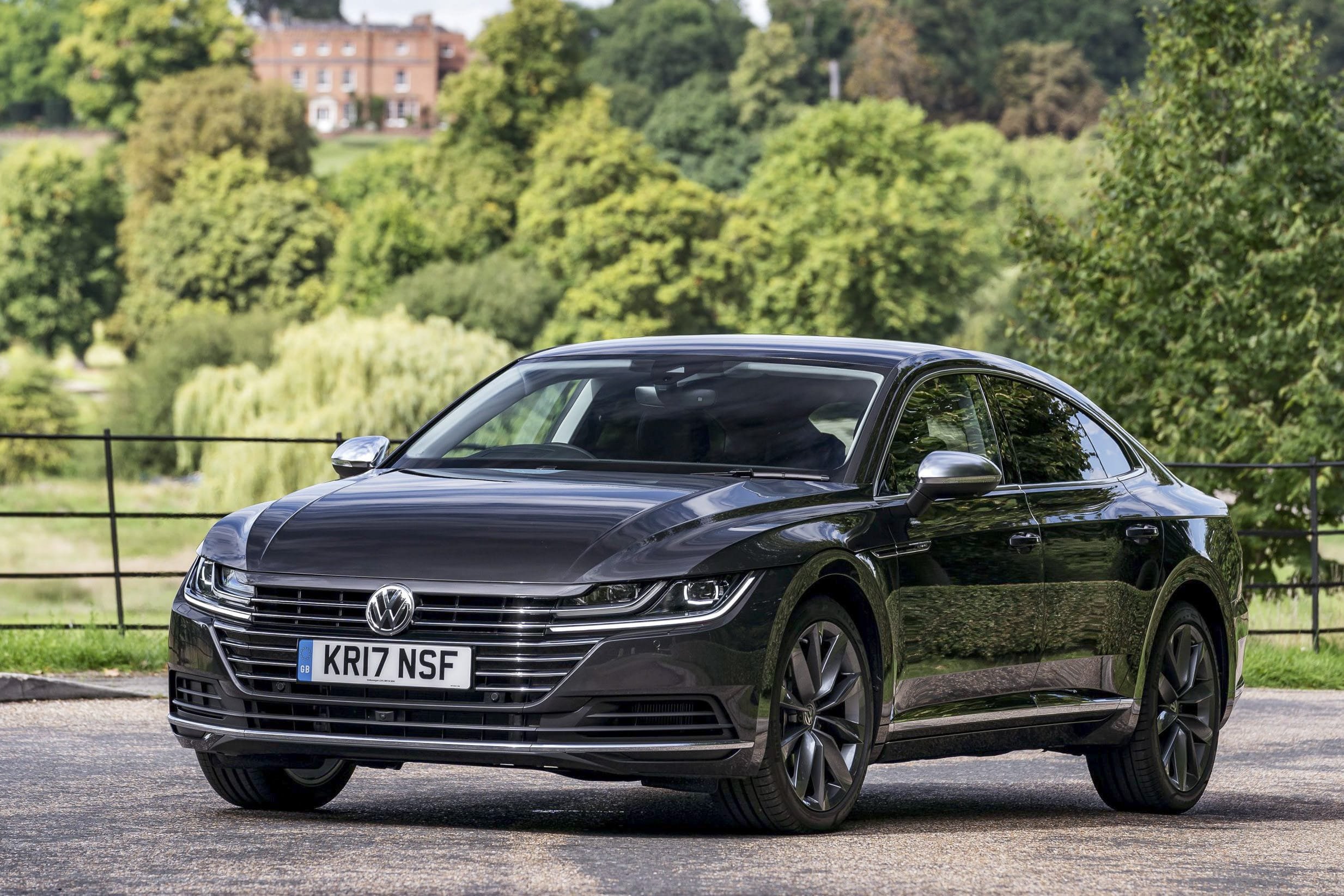 The Volkswagen Arteon is a highly polished all-rounder, with the potential to upset premium rivals. It looks stunning and oozes road gravitas – it's big, wide, macho and aggressive with a super-strong profile. It drives very well, is exceptionally spacious, comfortable and generously equipped.

It’s a big ask for the Arteon – while still wearing the ‘volksie’ badge – to aspire to a segment which houses well-established, high-ticket heavyweights that are design-led, very upmarket and are notoriously tough to compete with.

That lofty aspiration aside, the all-new Arteon flagship deserves your consideration – as it does its future success.